The project is situated in Yiwu Economic-Technological Area and beside the Yiwu River. With a total construction area of 82,360 sqm, it is a large cultural complex that serves a multitude of purposes including cultural and recreational activities, education and training, sports and physical exercise, etc. 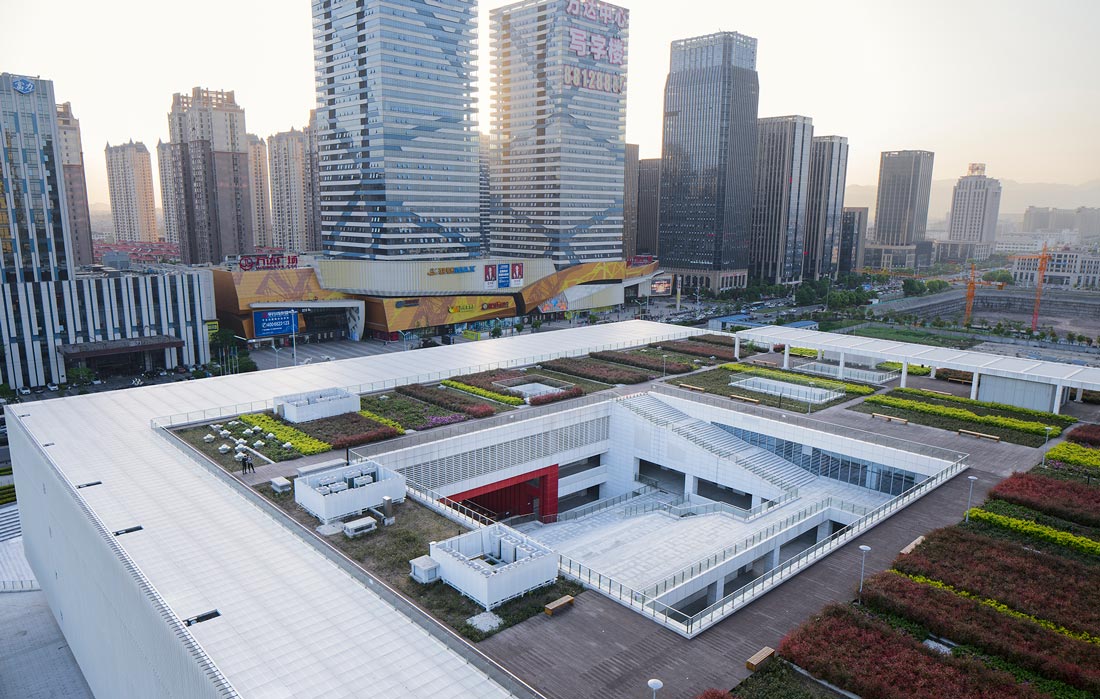 Globally renowned for its burgeoning small commodity market, Yiwu is a Chinese city where small and medium-sized enterprises are densely concentrated, and the private economy is highly developed. This is reflected in the urban built landscape, awash with a large number of homogenized, small-scale and high-density buildings. The local citizens have a strong desire for iconic city architecture and open spaces for public activities. After being included in the central city planning scheme for Zhejiang Province, Yiwu has begun to take firm steps towards becoming an international metropolis. The municipal government hoped to take the construction of Yiwu Cultural Center as an opportunity to show citizens a new city image and declare cultural confidence to the world for the future. 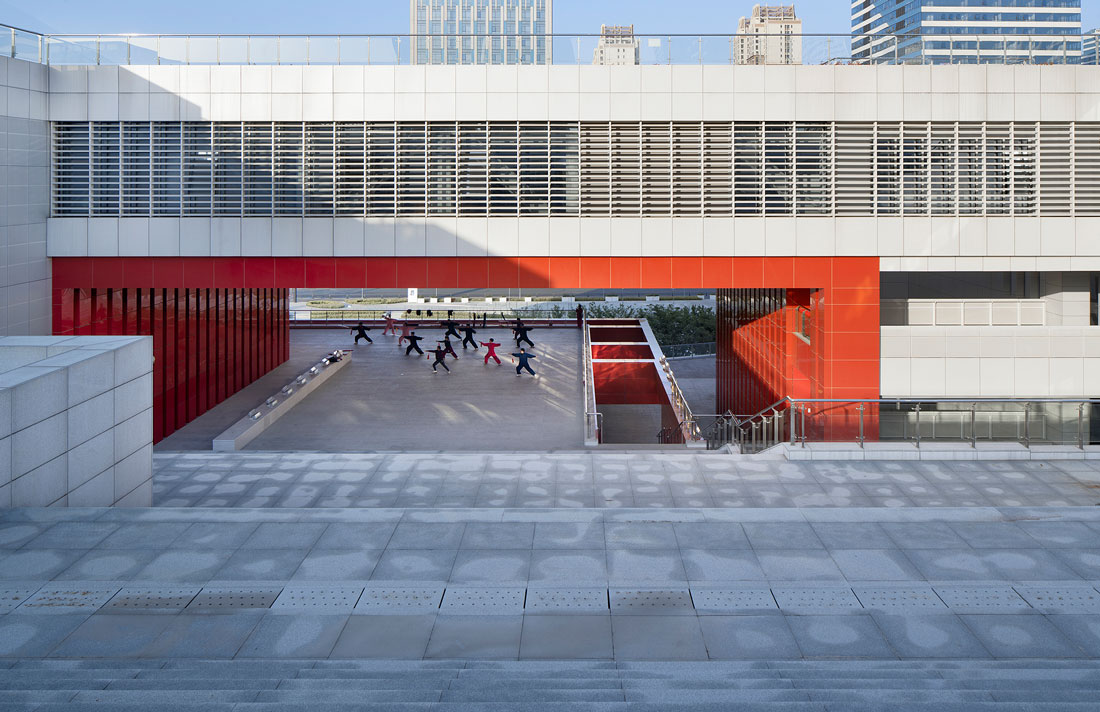 When approaching the design of the large multifunctional cultural complex, the key considerations were how to express respect for the local culture in an appropriate manner and how to present a modern appearance for the emerging city, while taking into account local people’s traditional and humanistic sentiments.

The design gathers parts into an integrated whole, incorporates and coordinates complicated functions within a minimalist architectural structure, and produces a large architectural volume that differs from that of ordinary buildings in the city. 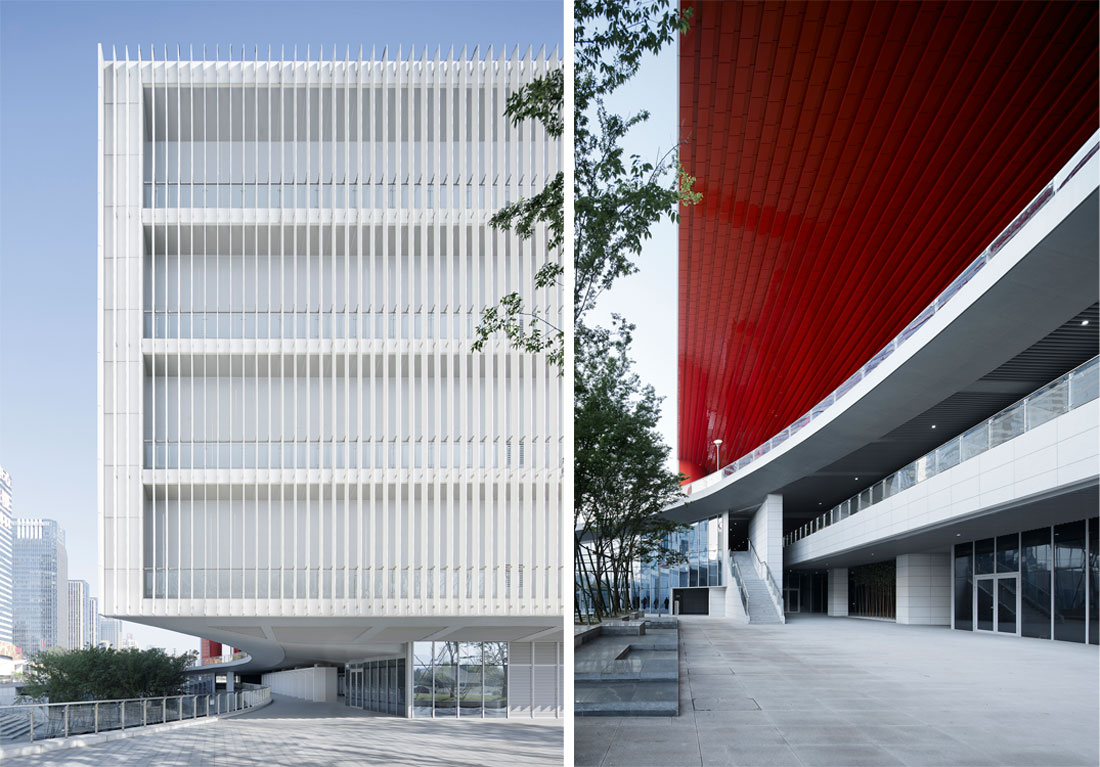 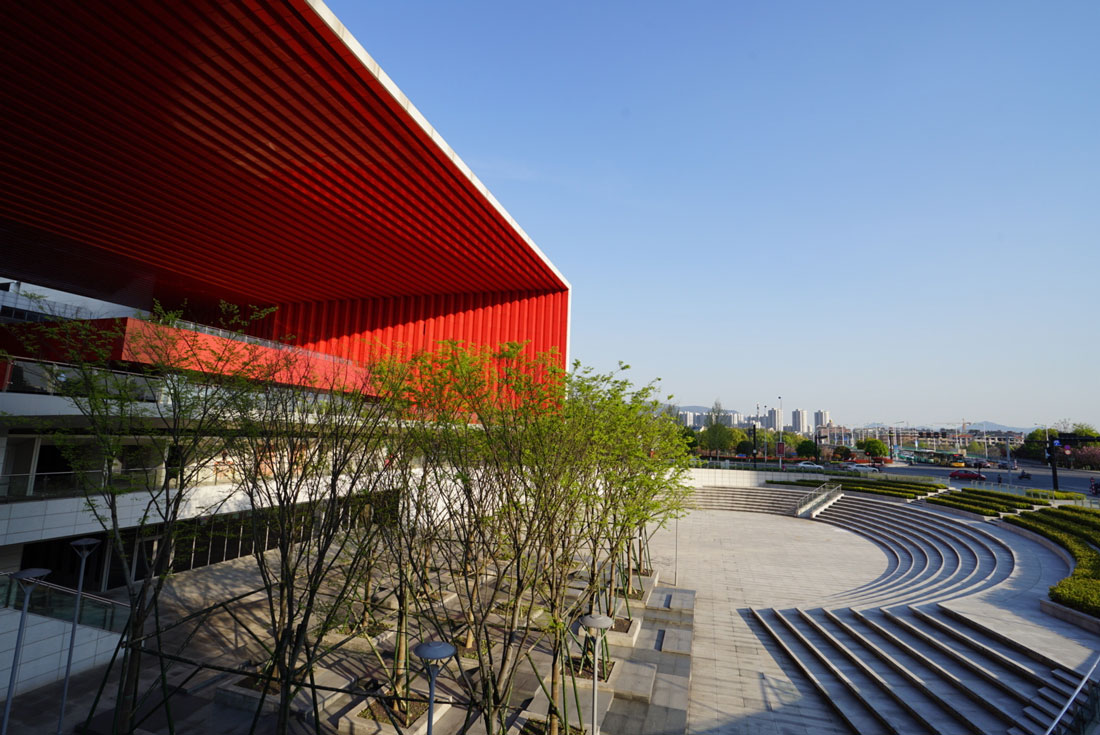 The project inherits the courtyard-centered spatial layout of traditional Chinese architectures. As opposed to arranging a big hall in the center area of the building, the architects designed a multi-dimensional courtyard, which starts from a sunken square, stretches upwards along slopes and big steps, and eventually reaches the rooftop garden. This arrangement features a flexible and smooth circulation and offers varying views for people at each step. The design also draws on the spatial organization techniques of traditional Chinese gardens. Around three sides of the courtyard, the functional zones of theater, fitness center, and youth center are arranged, while the remaining side houses the main entrance with a huge roof resembling a cloud hanging in the sky. The wide “gray space” under the entrance is derived from the spatial pattern of traditional public areas in southern China, such as performance stages and ancestral halls, which meets the demands of local public cultural events. 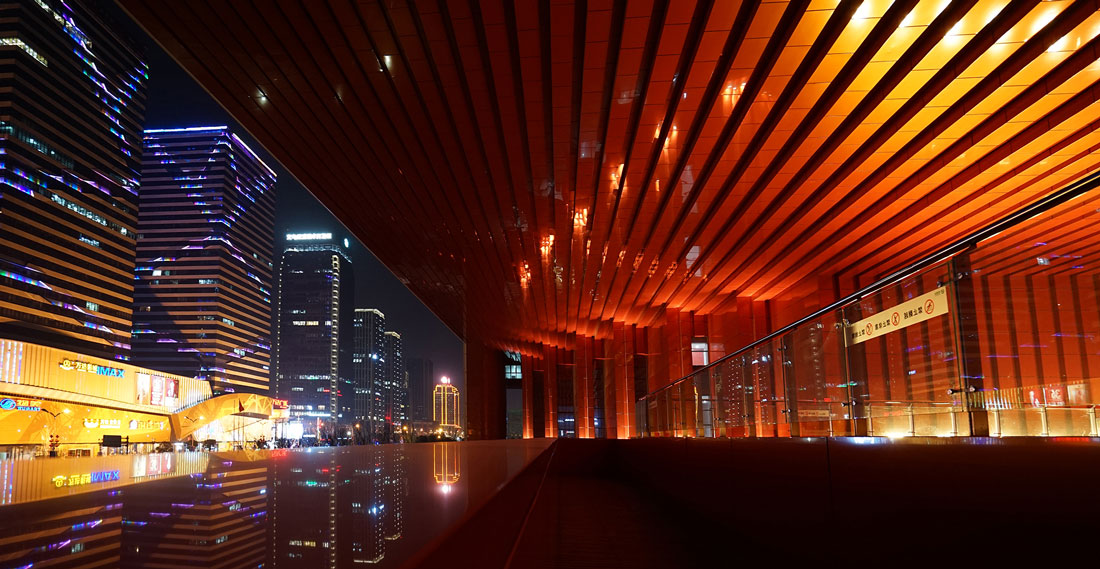 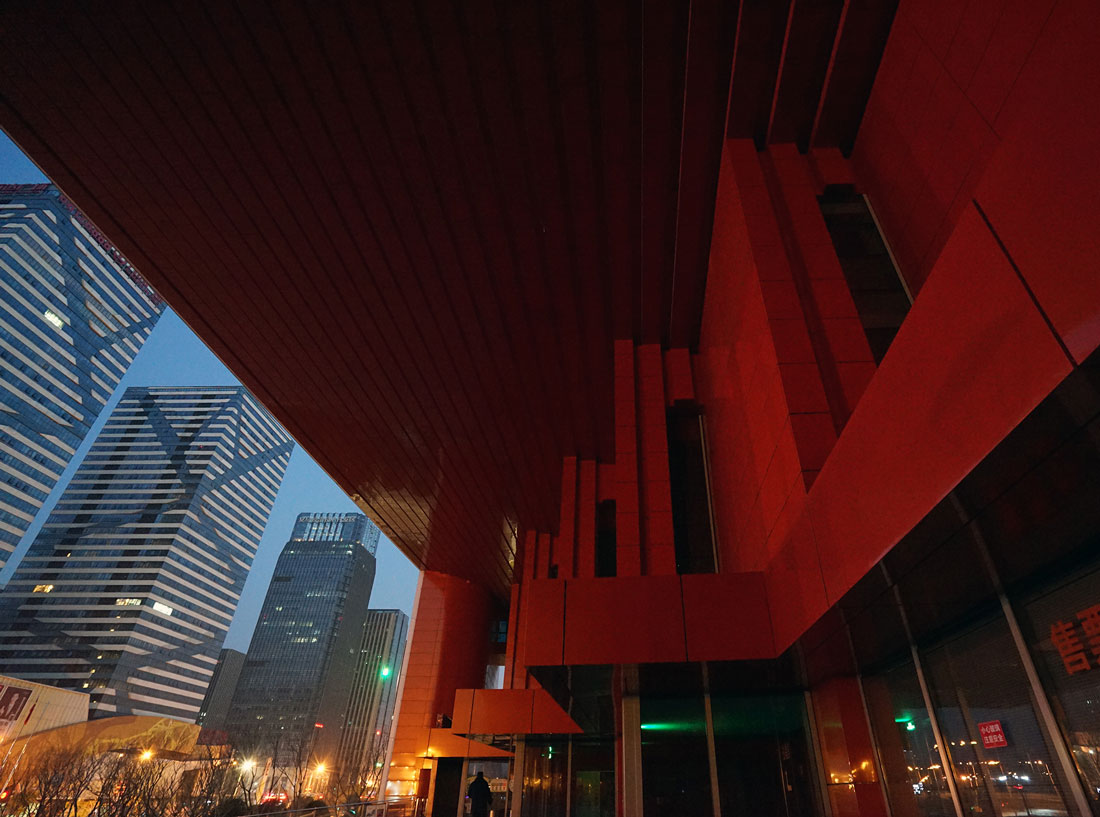 The urban stage under the expansive roof is the most popular with citizens, where they are protected from wind and rain and can also enjoy a good view of the enchanting river scenery and bustling cityscape. Every morning, lots of people come there for sports, exercise and rest. The abstract red corbels under the eaves of the big roof have a unique form, looking like stage curtains and ancient Chinese palace brackets, embodying traditional Eastern culture. The red color of metal plates was customized, called “Yiwu Red”. The plates are characterized by changing hues: they are vermilion under normal conditions and present a brilliant golden color under light from certain angles. “Yiwu Red” implies that the city can provide merchants worldwide with fantastic opportunities to seek wealth and realize their dreams. To search for the surprising golden hue has become a fun thing for tourists to do at the Yiwu Culture Square.

The sunken square is combined with a stepped seating area, making it suitable for organizing public cultural activities with Chinese characteristics. When walking across the long and big steps and reaching the wide-open rooftop, people can have a panoramic view of the charming Yiwu River, Diaoyuji Park, and Lion Mountain. As night falls, the simplistic façade facing the river turns into a huge screen, which becomes more glamorous by the reflection of the gleaming Yiwu River and offers a gorgeous view of the city.

« The Bridge: Design Solution for Spatial and Socio-Economic Landscape
Hoekenrodeplein: Redevelopment of a Square »