The Collective Dream: Boundaries and the City

And The City | Hagar Abiri

Listen to the related podcast: The Collective Dream Boundaries and the City by And the City.

Paul Rabinow interviews Michel Foucault about his interview for the Herodotus[1]. In reply to Rabinow’s question about the political nature of architecture at the end of the 18th century, Foucault says that in the 18th century we start seeing political literature about techniques for governance in society where architecture and urbanism play an important role. Authors begin reflecting deeper on the social order, asking “What is a city?”, discussing the need to eradicate epidemics, prevent coups and promote family life (according to accepted morality of the 18th century), addressing representation of the collective, infrastructure and how to build houses.

Architecture has always been a tool in the hand of governors, priests and those who wish to demonstrate or communicate power. In the current search for an architecture that represents the period and free democratic regimes, it is important to examine not only the style, but the whole procedure and the relevance of local politics that outline the boundaries and planning conditions.

The Stadtschloss, also known as the Berlin Palace, is the perfect example to start this paper with. It has it all: layers of historical conflicts and power demonstration through architecture. It tells the story of the city but also demonstrates a national identity conflict of the whole German nation. It expresses the evolution of private-civic initiatives in a strategic location that shapes the heart of the city, metaphorically and literally.

Since its completion in 1443, and until 1918, the Berlin Palace was the home of the monarchy and the Prussian center of power. During the Weimar Republic (1918-1933), the palace was used partly for state purposes but also as a public museum. In 1945 under the Nazi regime and during the Second World War, the building suffered severe damage. However, its structure and content remained sound and could be restored. In fact, the building was partly repaired and was used as an exhibition space. Although recent documents from 2016 reveal the intentions of the GDR to reconstruct the palace, it was ultimately demolished in 1950. The demolition took much effort and 19 tons of dynamite. Along with the decision to preserve the original balcony of the palace[2] and to attach it to the Council of State building, and to assign a new purpose to the empty plot as a parade area called Marx-Engels Square[3], it is the inevitable conclusion that the demolition of the palace was a political decision that sought to demonstrate governmental power. 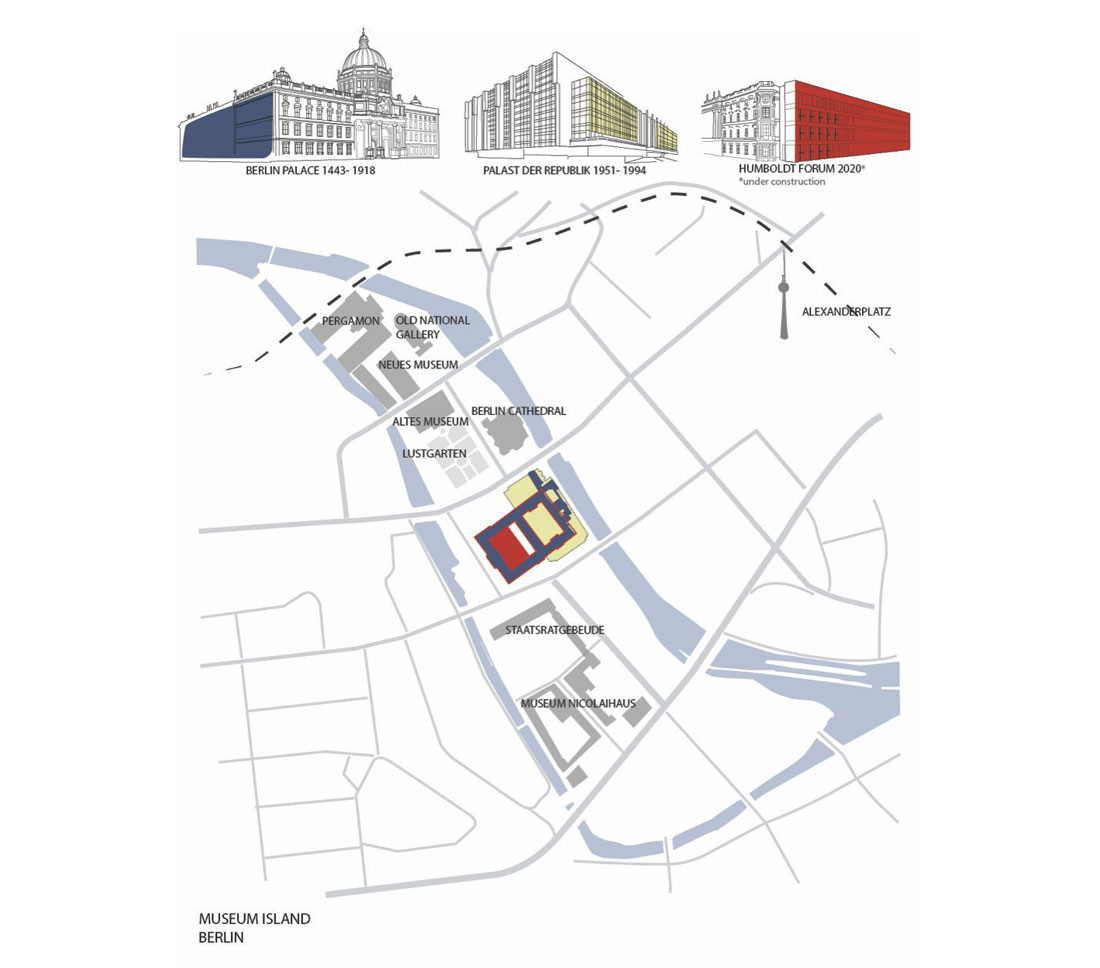