In response to both the temporary nature of the facility and the context where it is located, Peris+Toral proposed a detachable and reusable construction that minimizes its impact on the territory: a scaffolding system that serves as the structure and the formal solution for the project. 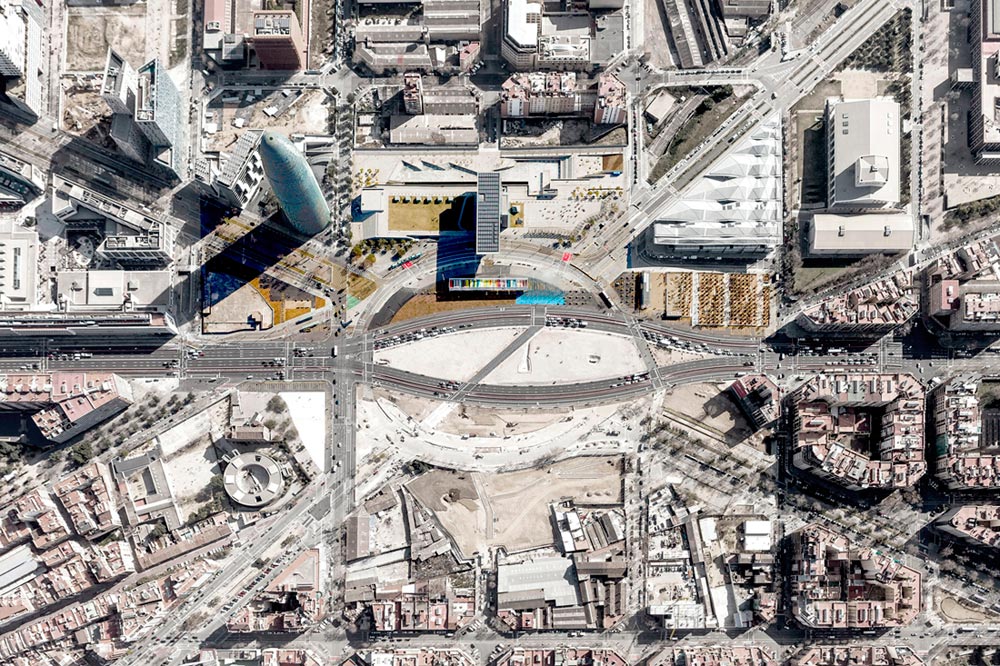 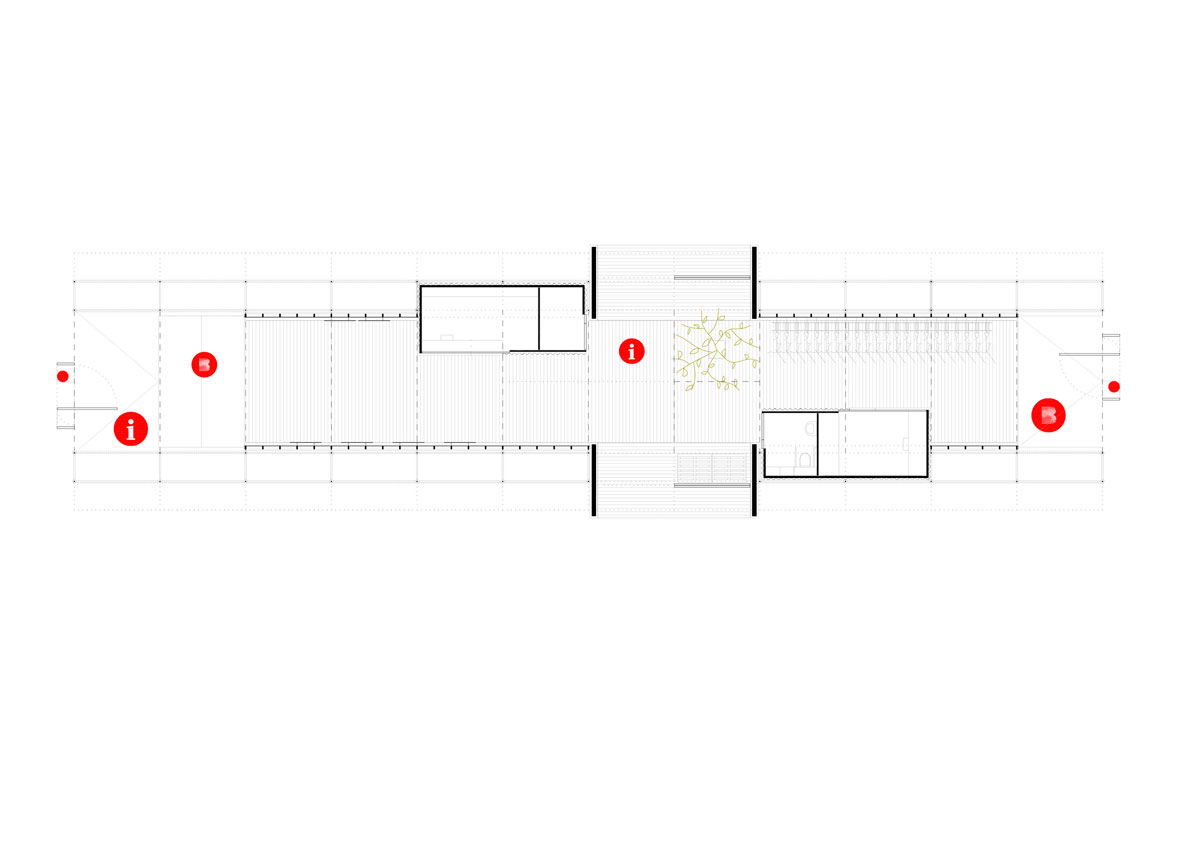 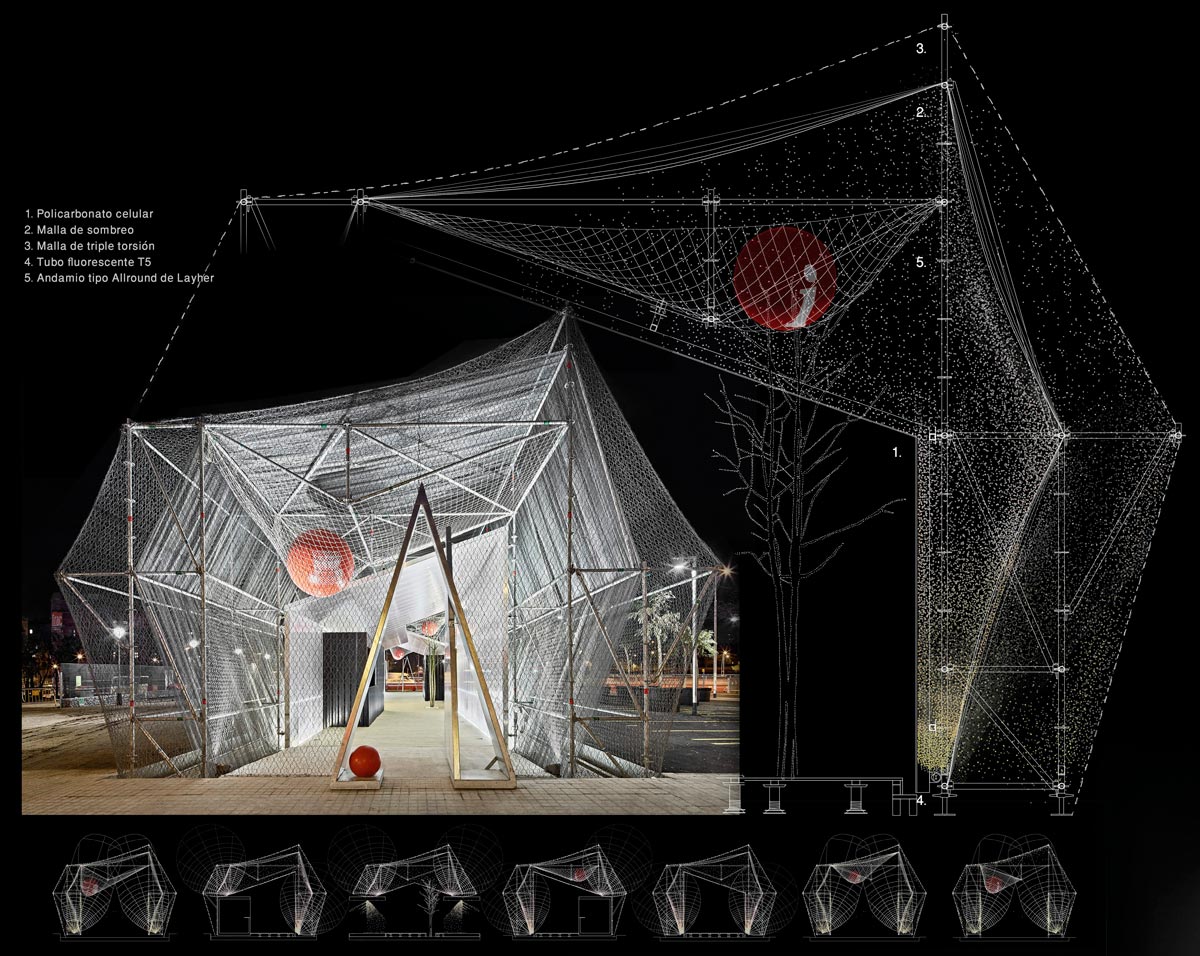 This temporary facility, built a year ago by the Catalan firm Peris+Toral, is part of the provisional urbanization of the Glòries Square in Barcelona. With this project, the studio reasserts a new way of working and enhances its search for new solutions and constructive processes.

The facility was designed as an information point, an area for an exhibition on the new design for the square, and a rental point for electric bicycles. It is located at the intersection of two pedestrian paths: one that crosses the square from top to bottom, and another that will connect with two nearby facilities: an oak tree nursery and a new pergola.

With its temporary condition, the construction is subtly integrated into the transformational environment of Glòries Square. Its linear shape, materials and its structural system highlight their ephemeral character and the idea of permeability.

Along these lines, the scaffolding acts as a support for the three envelopes necessary to provide habitability to the construction: a waterproof translucent polycarbonate skin, a shade mesh, and a metal mesh that provides protection. The areas which house the internal program and services are created using two prefabricated container buildings. Wood is used for pavement and to frame the side entrances to provide warmer areas in the facility. 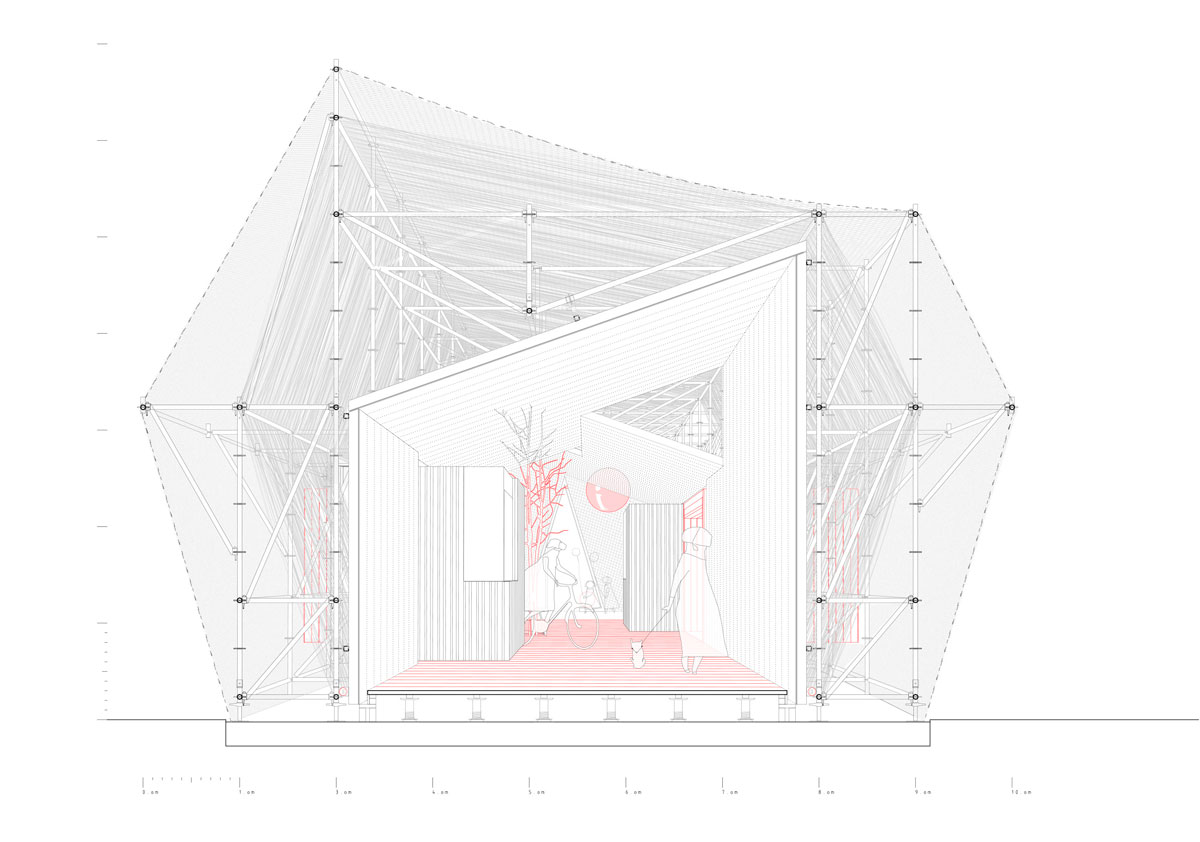 Sophistication and innovation in a Temporary Barcelona Pavilion

Transitory and ephemeral take on new meanings in the recently completed tourist information pavilion at Plaça de les Glòries in Barcelona, Spain. Joining the impressive collection of large buildings by famous architects around this major traffic intersection turned public space is this modest information pavilion by Barcelona architects Marta Peris and Jose Toral. Their work is an exercise in creativity and ingenuity and makes up in innovation for what it lacks in size next to its big neighbors. The new information pavilion is intended to occupy its site for only a couple of years until construction and re-development of Placa de les Glòries is completed, but while it exists, it is one more piece of inventive design in the city. 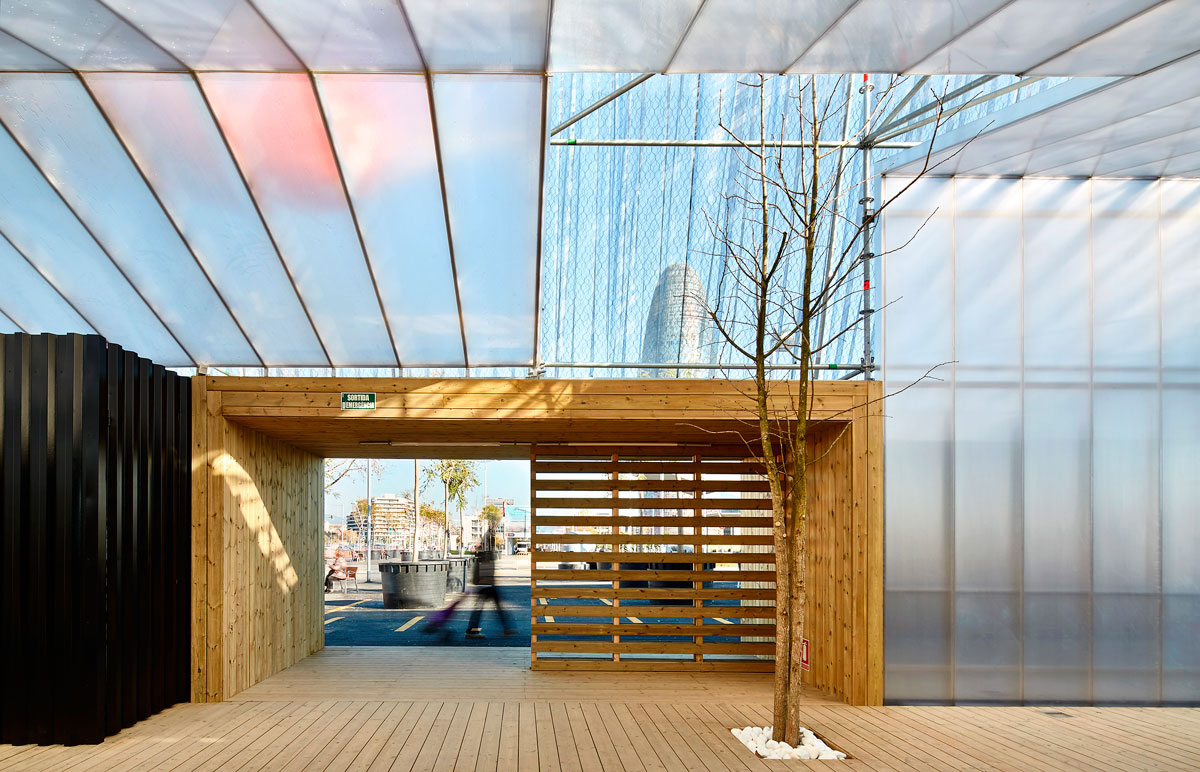 The building, if one can call it that, is a response to a unique design program. The brief required a low cost temporary structure to house a tourist information center and a bicycle rental booth that would occupy its site for only a period of three years. This temporary pavilion is located in a ‘provisional urbanization’ zone in the Glòries urban re-development and revitalization project. The urban re-design is aimed at transforming this sprawling under-utilized space formerly occupied by elevated roads and a gigantic roundabout into pedestrian friendly public space. The project involves walkable connections to the neighborhoods around it, new business, cultural centers and an urban park. The redevelopment masterplan is an ambitious one that seeks to bring new life to the area and has already involved many interventions such as below ground traffic underpasses, an underground metro station with connections to a street level tram and buses, a new home for the n Els Encants flea market, several multistoried office buildings, hotels, concert halls, open air cinema, design museum and shopping centers. 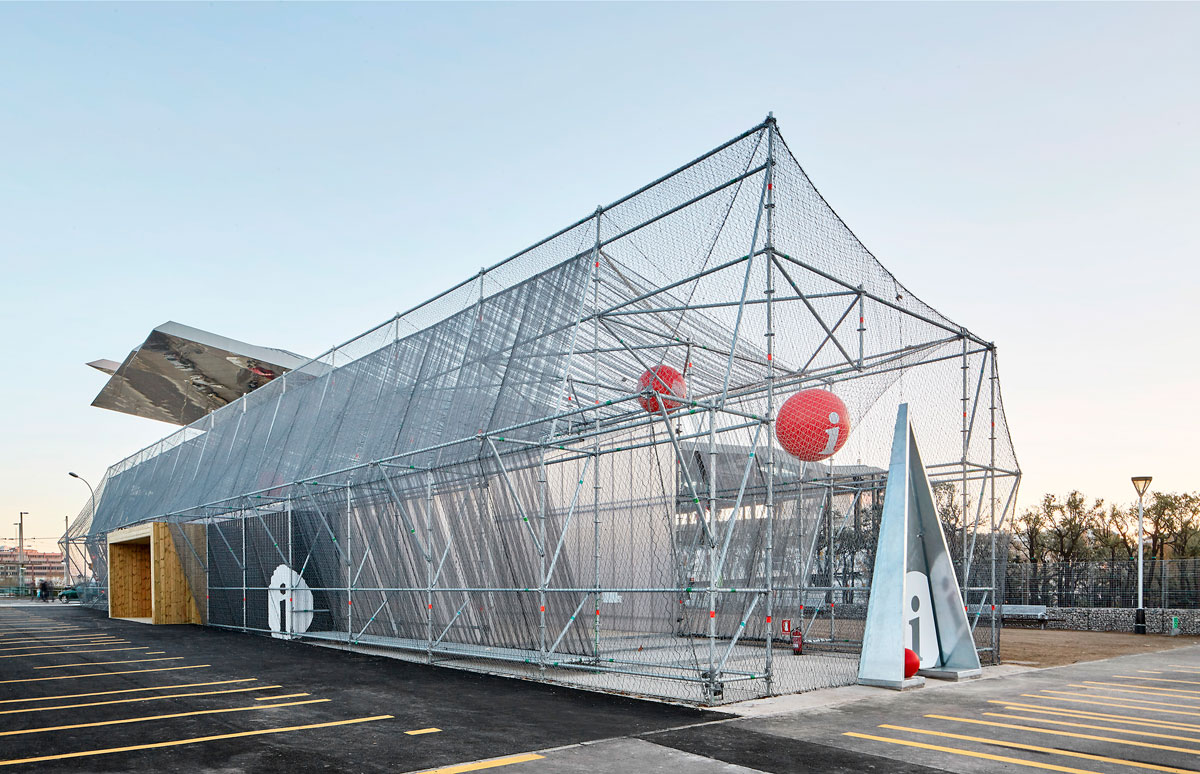 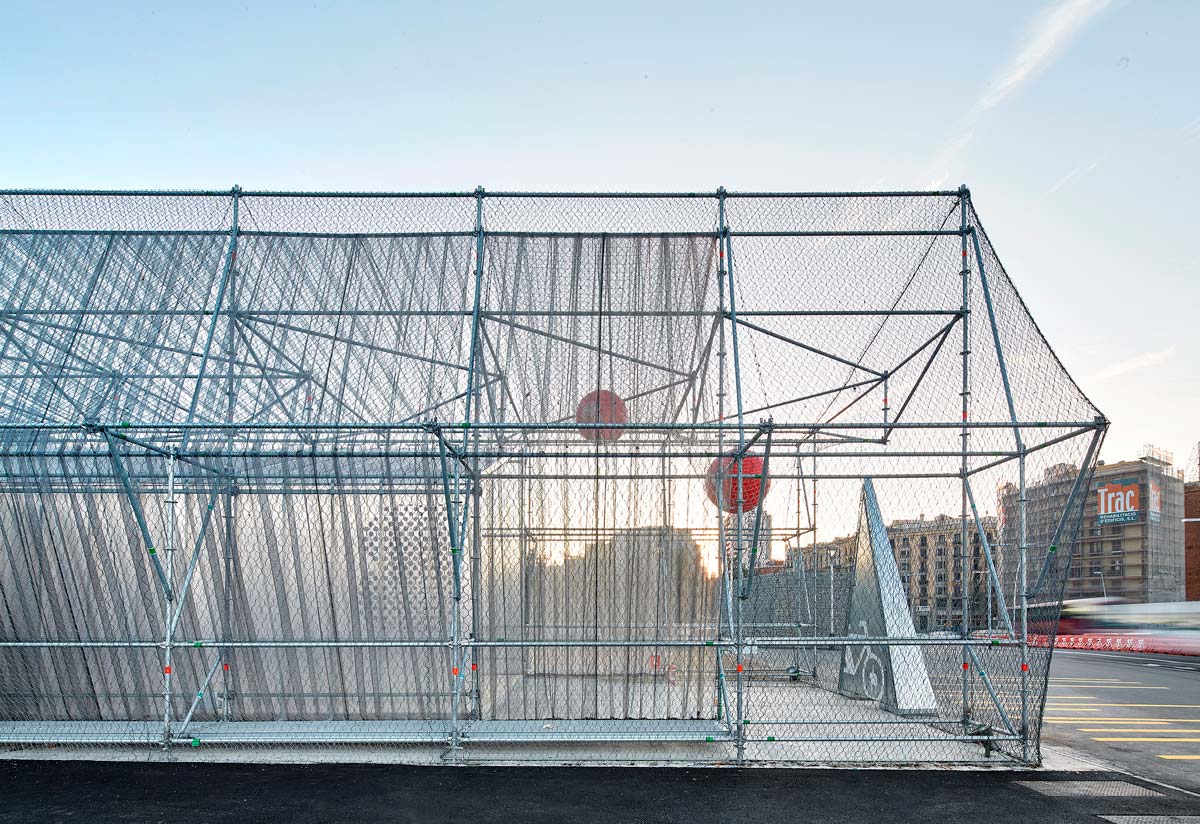 The tourist information pavilion is a component of the current phase of ‘provisional’ or temporary development that will occupy the area and allow people to use it while construction and implementation of the masterplan continues. The site is located between a terraced nursery which functions as park and temporary holding place for approximately 200 oak trees removed from the old Plaça de les Glòries Park and a temporary pergola that houses a place from where the progress of the re-development project can be viewed.

The competition brief called for a 200m2 low budget temporary structure. Architects Peris and Toral explain that “the ephemeral condition of a temporary building, that could be removable and reusable, determined the choice of the structural system: tubular steel scaffolding which when dismantled will minimize all traces of its existence on the site”. Attached to this structural frame are three layers of skins composed of wire mesh, nylon shade fabric and translucent polycarbonate panels. Over the structural frame the architects formed the outer protective skin of the building by draping wire mesh commonly used for construction fences. Below this outer skin is a layer of nylon shading mesh that filters sunlight into the ‘interior’ of the building. The inner most skin consists of rigid water proof translucent polycarbonate panels that serve as roof and walls defining and protecting the activity spaces within the building from the weather. The 5m wide and 40m long rectangular interior accommodates three functions. At one end is a visitor information booth and exhibition area. The central area serves as a lobby or transitional space and is defined by wooden entry boxes with large shipping pallet like sliding doors. A lone tree and small opening in the roof of the central area is, according to the architects, a reminder of the ubiqutous courtyard that is characteristic of Spanish architecture. At the other end of the rectangle is a bicycle rental booth. The bicycle rental booth and the visitor information counter are housed in black corrugated metal boxes that are reminicent of shipping containers. The building can also be entered from either end via triangular entry doors made from galvanized sheet metal. The horizontal shelves at the base of the triangular entry are a clever idea that strengthen and anchor the door frame, define the third side of the triangle, and also provide an edge that ensures a safe path that protects visually impaired individuals from running into the slanted frames of the doorway.

In describing the placement of the building on the site the architects describe their proposed pavilion as a lance that spans across and establishes a dialogue with the site. The long dimension of the pavilion functions as an axis that crosses the site alluding to a connection in the direction of the sea in the south and the hills to the north while simultaneously providing a boundary to the urban space. In the transverse direction the pavilion functions as a permeable sponge that creates a dialogue and a portal between the terraced nursery of old oak trees and a viewing place on the other side of the urban space. Through the juxtaposition of the program within the scaffolding structure the architects have facilitated a linear sequence of spaces within a reusable modular system that can be easily dismantled and adapted to other urban conditions and settings. 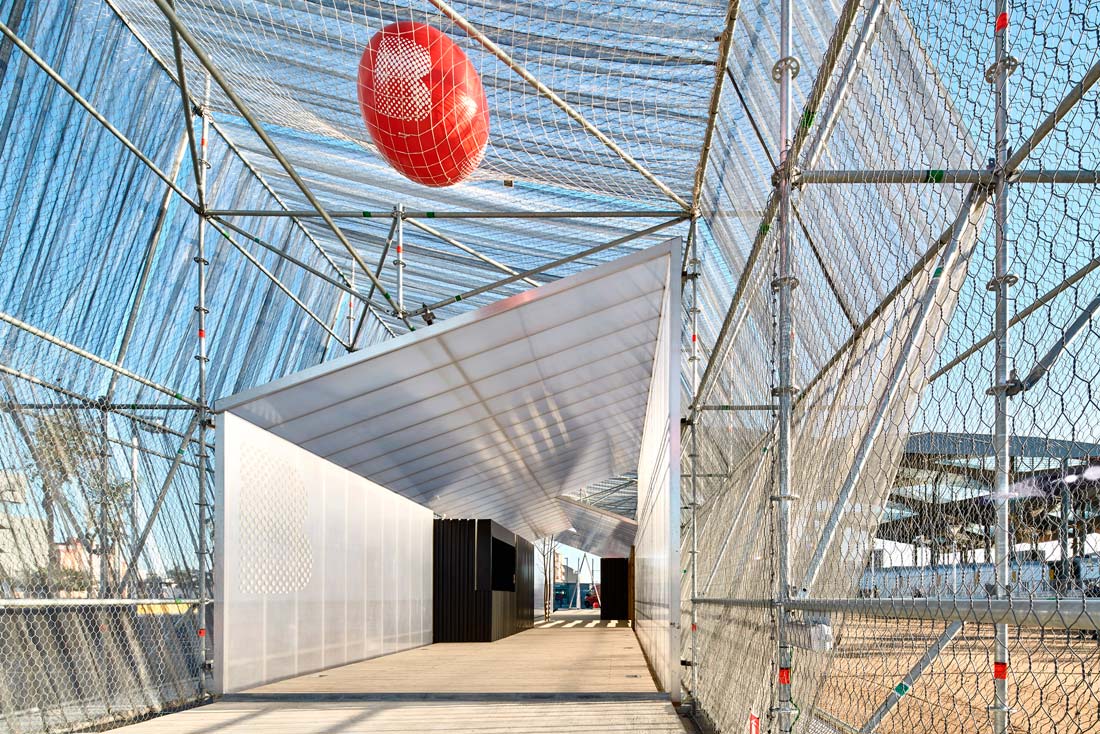 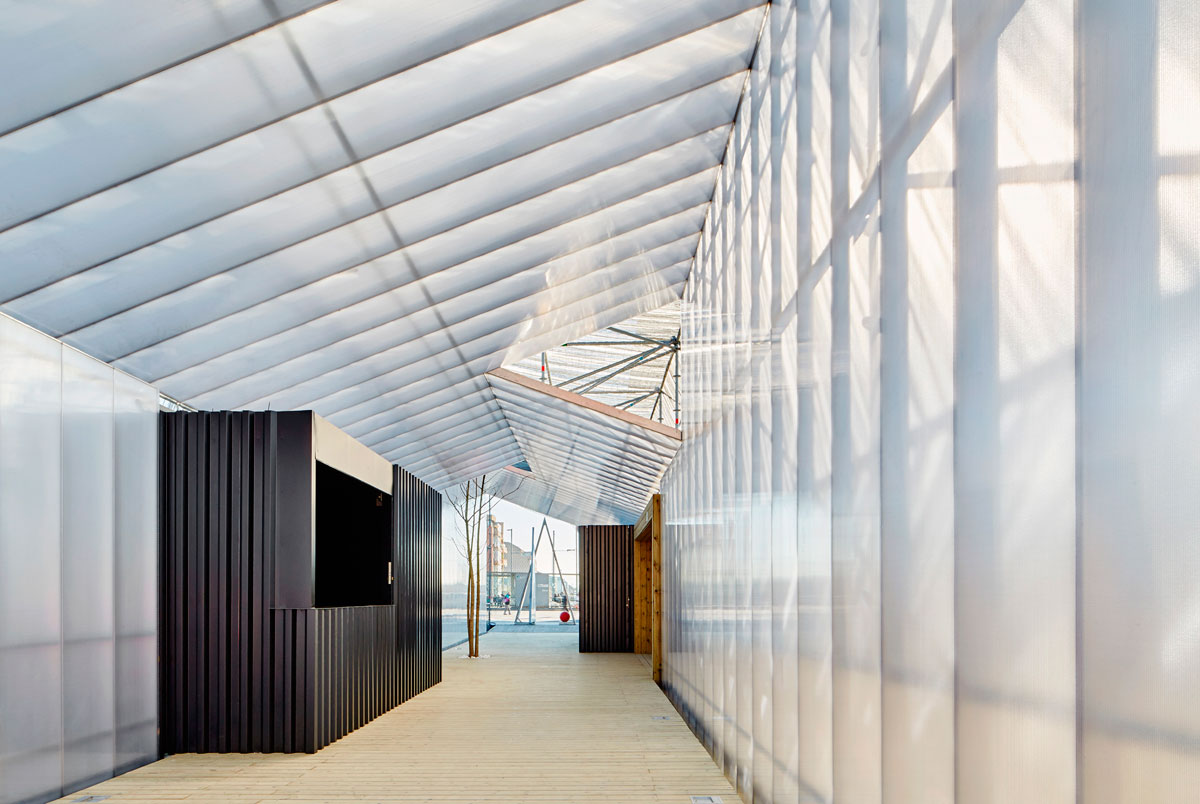 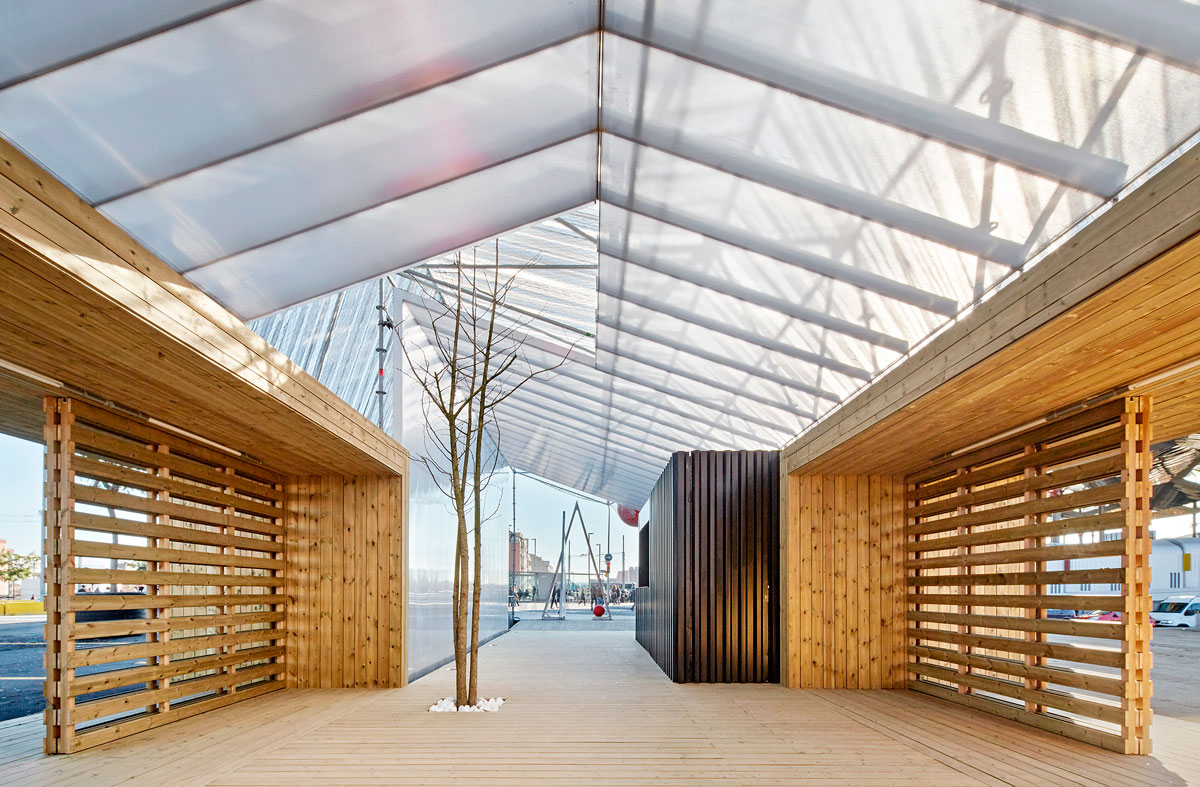 Architects Marta Peris and Jose Toral have demonstrated their ability to create an innovative design for a building that will be dismantled and can be reused. They have created an exciting ensemble from steel scaffolding, a truly temporary structural system, along with inexpensive and lightweight manufactured materials. All joints and connections use components that are used in the assembly of standard scaffolding. The recycled wood plank floor is built over a concrete slab and provides easy drainage when wet. The design is pragmatic and minimal yet sophisticated and inventive. This new transitory tourist information pavilion by Peris+Toral Arquitectes is one great little building that adds to the experience of exceptional architecture and public spaces in Barcelona. 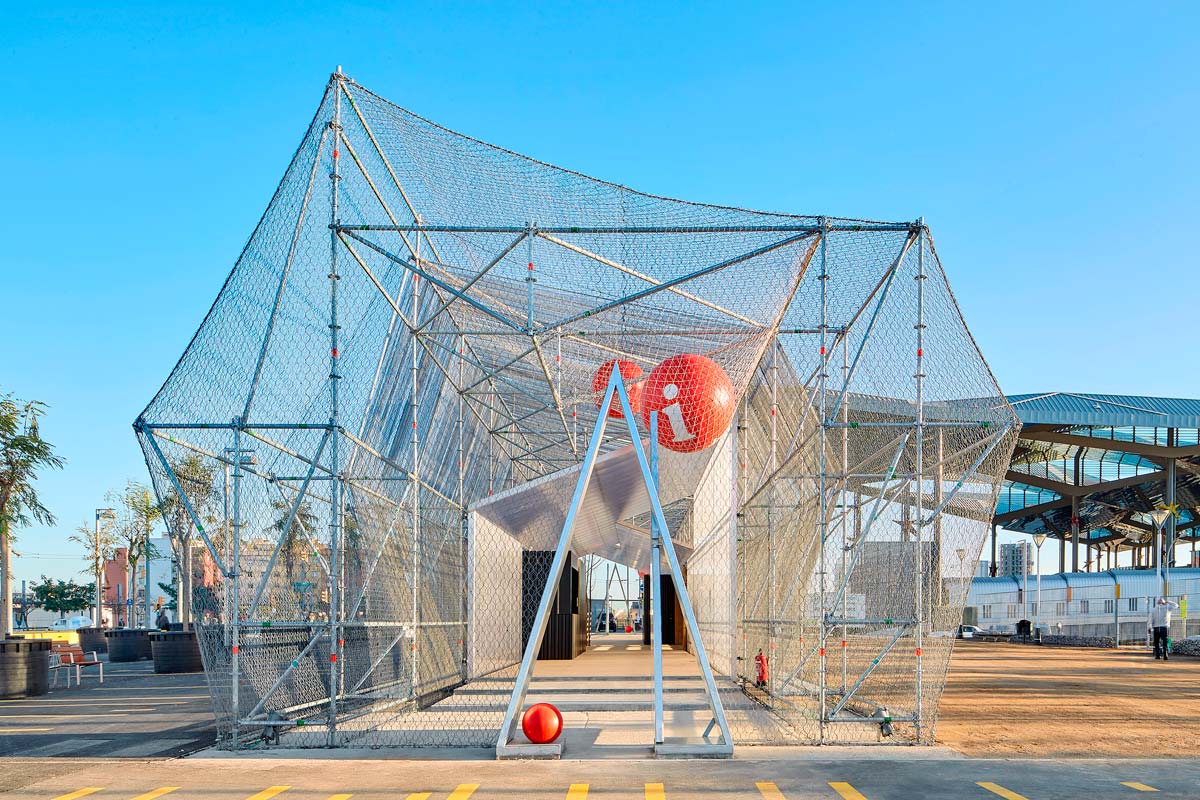 « Place & Qualities
Experiencing Scale: The Diminutive Dimensions of the Space »