With Main: East Side Lofts, 1100 Architect transformed a 100-year-old, derelict, half-completed factory into a contemporary multi-family residential building that has come to catalyze other development in the area. Due to the outbreak of World War I, the original building was never fully realized. Instead, it found improvised use as a hospital, and, later, as workers’ housing. The new 1100 Architect-designed project accomplishes two principle aims: an exhaustive renovation of the historic building, and an addition of equal size that brings the resulting building to the scale at which it was originally designed. To achieve a cohesive whole, the addition picks up the volume, rhythm, and proportions of the original building, but it reimagines what had been the unfinished wing in a modern language and with new materials, establishing a contemporary foil for the landmark structure. 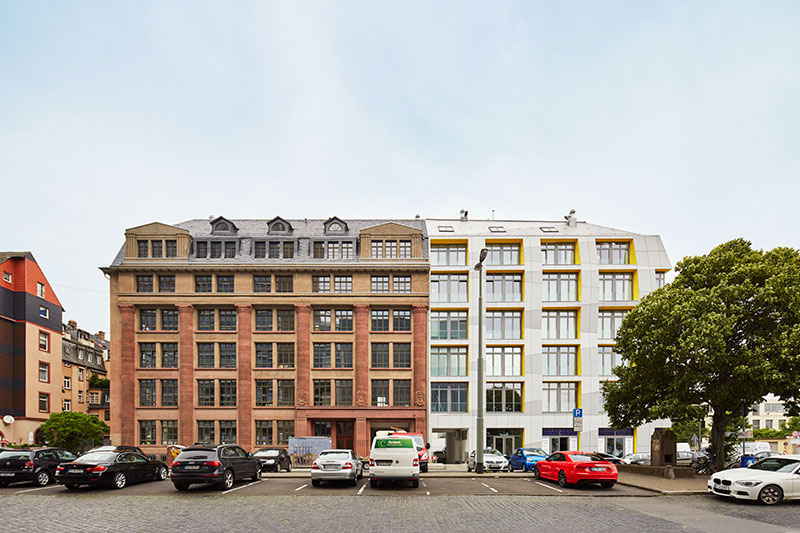 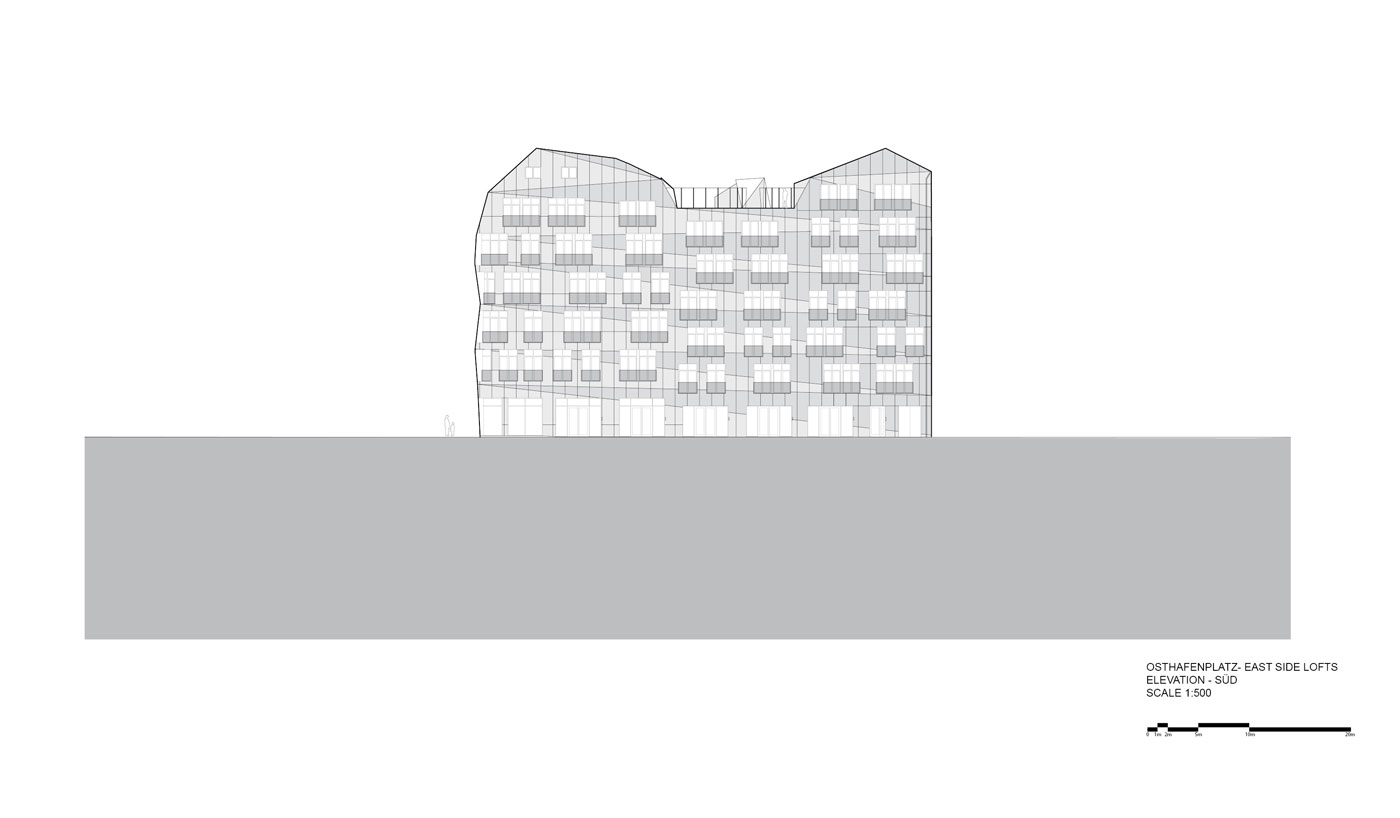 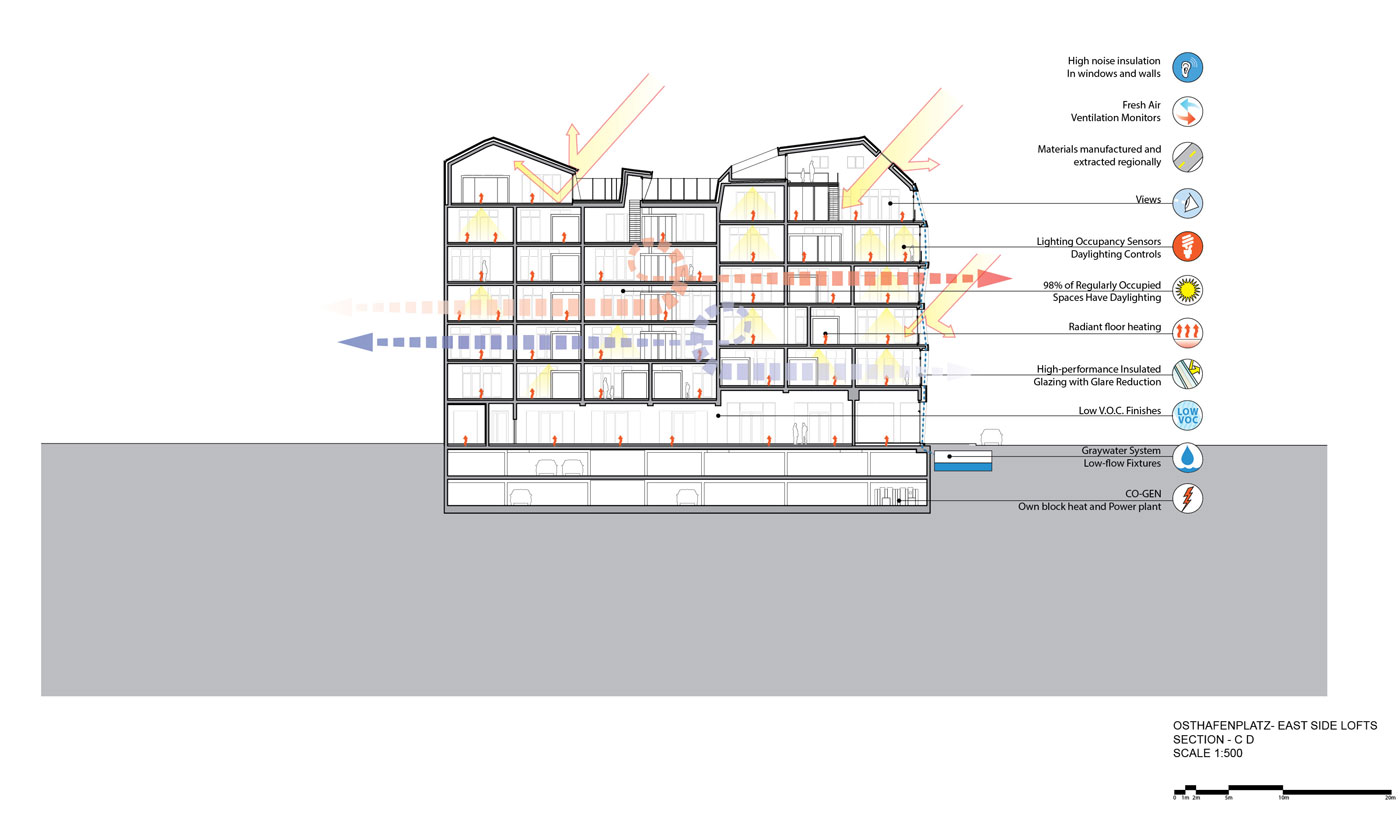 Situated in the former industrial district near Frankfurt’s East Harbor (Osthafen), the new project has come to redefine the area as a burgeoning residential neighborhood, having catalyzed other developments. The project includes 88 custom loft units with mixed uses on the ground level. The loft layout allows for maximal flexibility of living space. Key characteristics of the historic structure were transposed to the addition, especially its high ceilings and large windows to achieve this open effect and improve access to natural light. The upper floors use the attic to provide continuity of space, creating bespoke lofts with non-traditional floor plans. Each unit has a balcony, allowing for connectivity to the outdoors. A new central courtyard provides a verdant refuge for the residents. 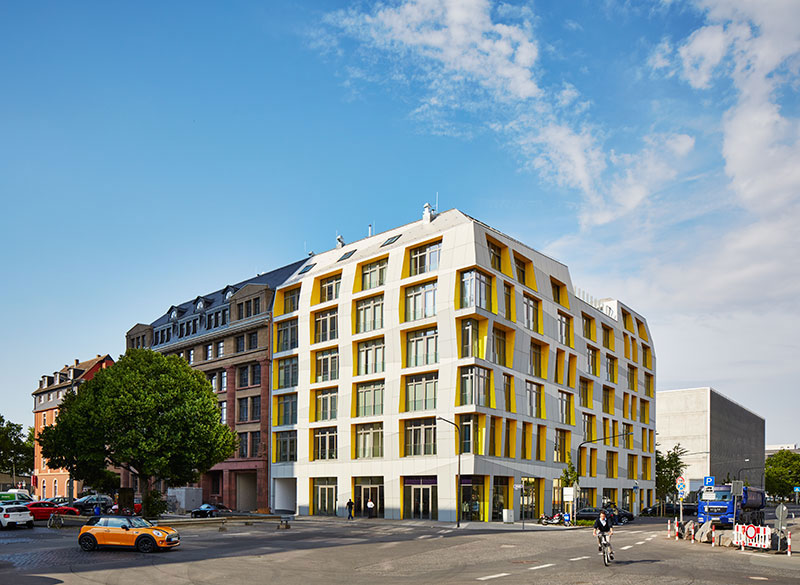 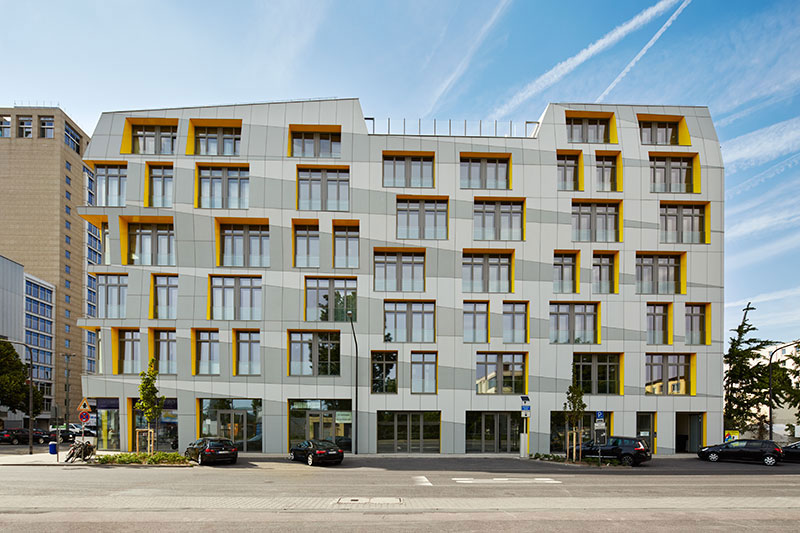 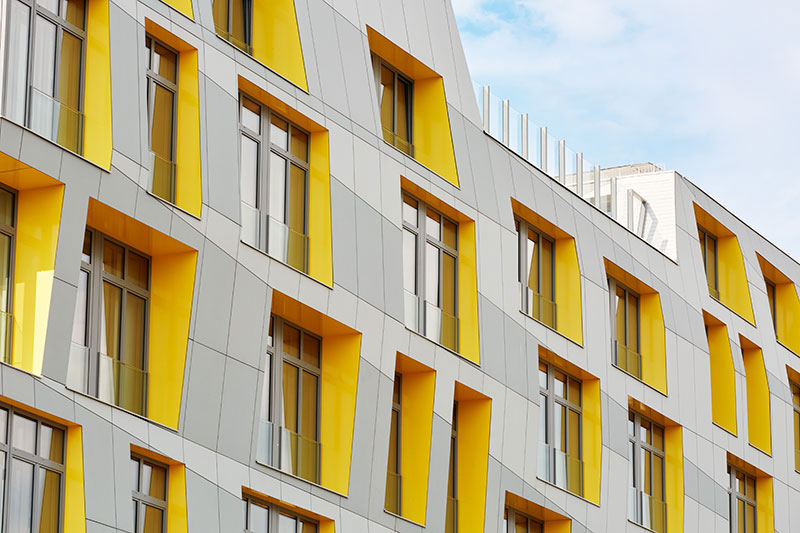 The façade, which is inspired by the original mansard roof, was conceived as a continuous skin. The outer surface of the building, clad in cement fiberboard, stretches seamlessly across the height of the façade and folds over to form the roof. The facets produced by these panels reflect light, creating a dynamic experience of light and shadow from different points of view and at different times of the day. Brightly colored reveals in the depths of the windows add to the façade’s dynamism. In addition to its distinct form, the building envelope employs highly rated soundproofing materials to mitigate noise from the harbor. Central to this strategy are the acoustical double windows which sit deep into the thick walls, deflecting sound vibrations – and offering expansive views out to the surrounding context the building has begun to transform. 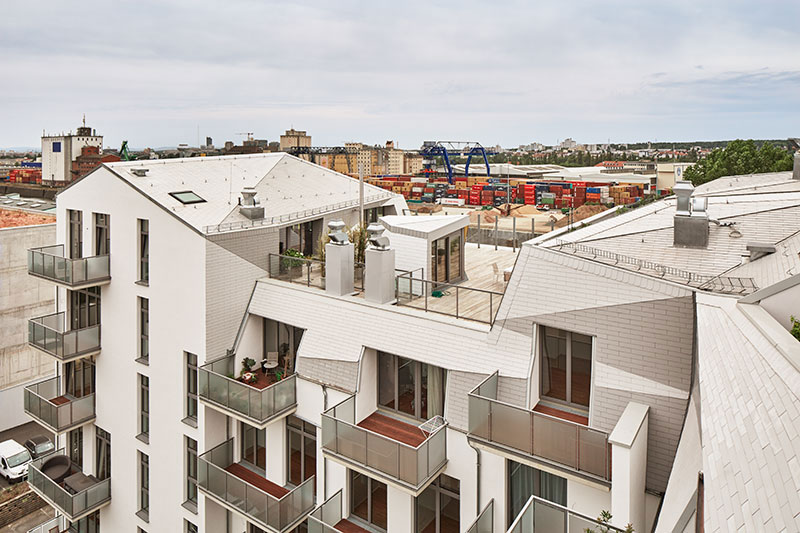 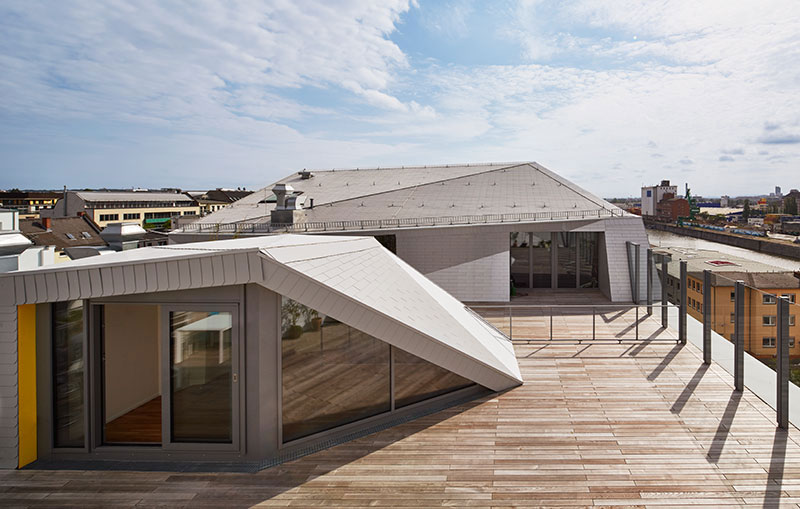 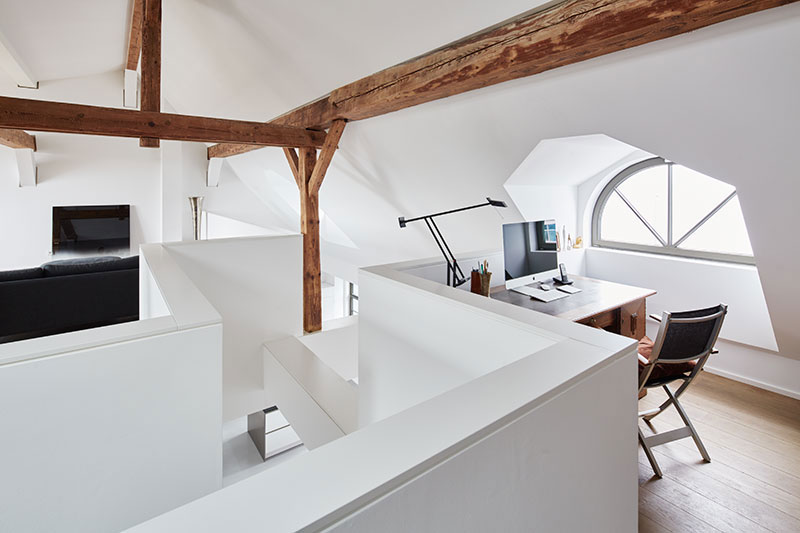 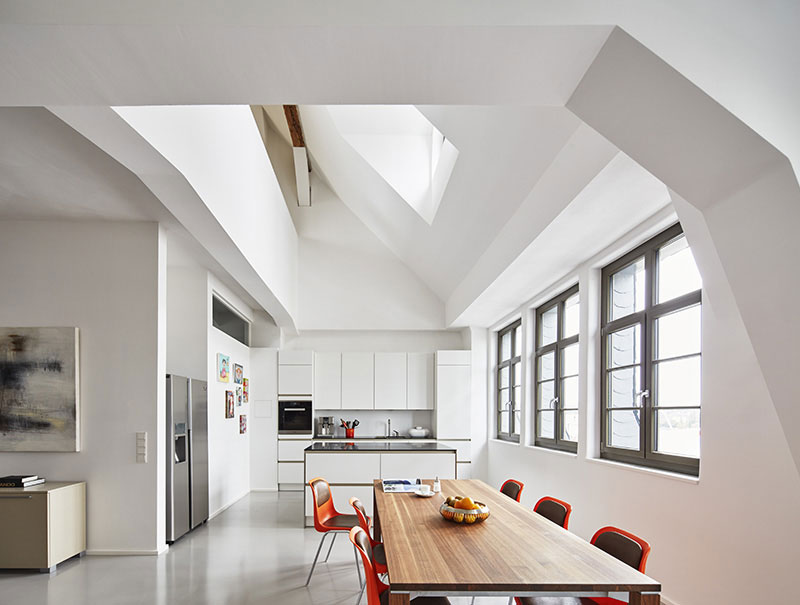