Agriculture today takes place at a range of radically different scales – from tiny urban farms that feed small neighborhoods to massive industrial operations that produce global food supplies and commodities. Over the past decade, as agriculture has gained popularity in design schools, designers have focused almost exclusively on smaller-scale issues, such as brownfield development in shrinking cities, while ignoring critical opportunities to intervene in large-scale agriculture and the global commodity flows it is connected to. At larger scales, agricultural processes have many stakeholders, such as private companies, non-profits, government agencies, international agencies, and academic institutions. The environmental and landscape impacts are also of greater significance, since the application of chemicals and the alteration of land are taking place over vast territories. ORG Permanent Modernity and P-REX, along with studios and research led by Alexander D’Hooghe and Alan Berger at the MIT Center of Advanced Urbanism, had an opportunity to redefine large-scale industrial agriculture for a project in rural Ghana. The design challenge was to create a vertically-integrated industrial agriculture operation, along with the necessary industrial, residential, and infrastructural components that would be required for an urban settlement of 30,000 people over 15 years. 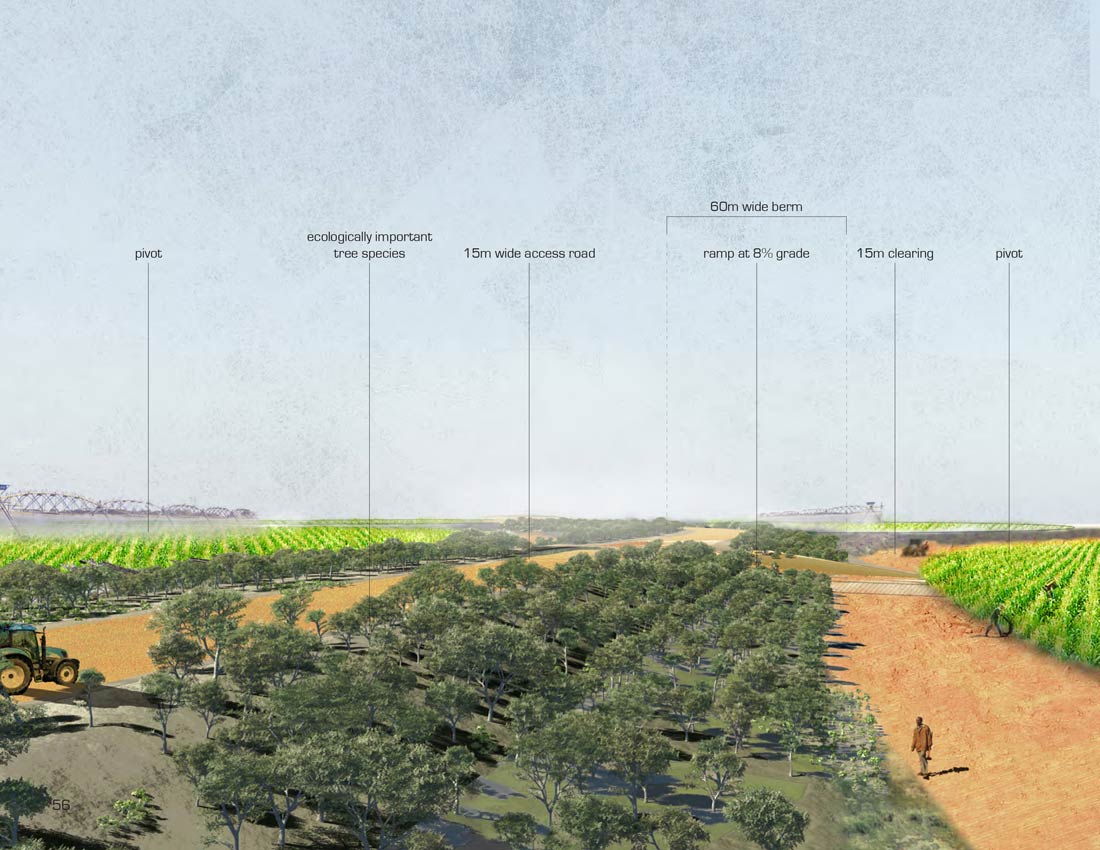 The masterplan is designed as a conceptual model, demonstrating principles of design thinking that can be adapted to other sites in Africa with potential for agricultural development. The masterplan shows how agricultural operations and ecological operations can coexist with human settlement. The masterplan’s landscape components fulfill important sustainable farming and environmental objectives and add amenity and economic value. Human settlement components are organized as neighborhood districts closely linked to agriculture, related industries and infrastructure, making production and quality of life a central principle. 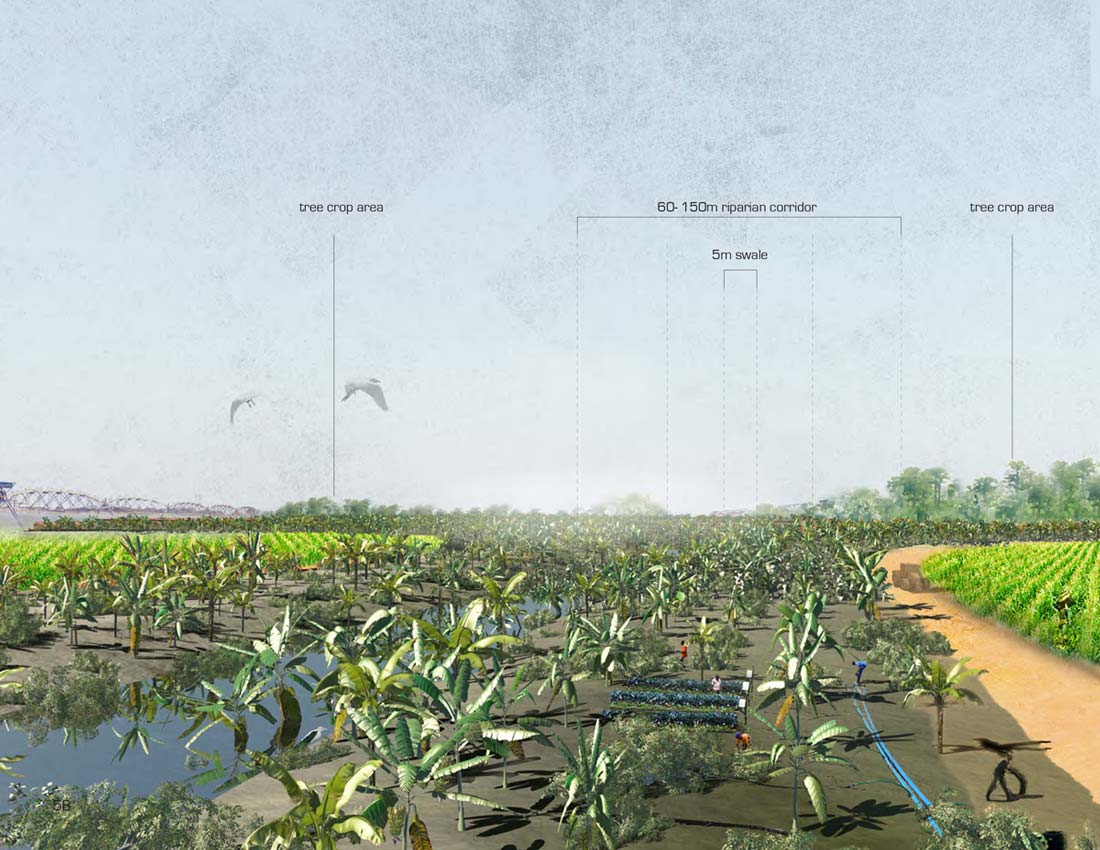 An Overview of the Site

The project location is 100 miles north of Ghana’s capital, in the Afram Plains along the coast of Lake Volta. The project area is 10,000 hectares and is sparsely populated with small fishing and subsistence farming villages along the shore. Currently, there is a small pilot farm up and running.

The site is posed with three major challenges for large-scale commercial agriculture and human settlement:
1. To restore and maintain a degraded ecology;
2. To create a diverse settlement that integrates new inhabitants & existing villages;
3. To connect this isolated site to the rest of the country.

The region is faced with a variety of environmental challenges. Charcoal production, wildfires, and unsustainable farming have resulted in extensive deforestation; the local topography puts the soil at risk of erosion and eventual sterility; and the man-made Lake Volta is overfished and polluted from sewage and runoff. Approximately 2,300 people live across 18 villages within the project area, who are mostly fishermen and farmers living in mud and thatched roof houses. An informal network of paths crisscrosses the site to connect different villages to each other and form routes to farmland. The site is lacking in a coherent, sophisticated infrastructure system, which is crucial to addressing the larger geographical isolation of the site. Furthermore, there is a major deficit of collective spaces and institutions, poor infrastructure and mobility networks, and few shared agreements or awareness as to the larger consequences of the current utilization of environmental resources. 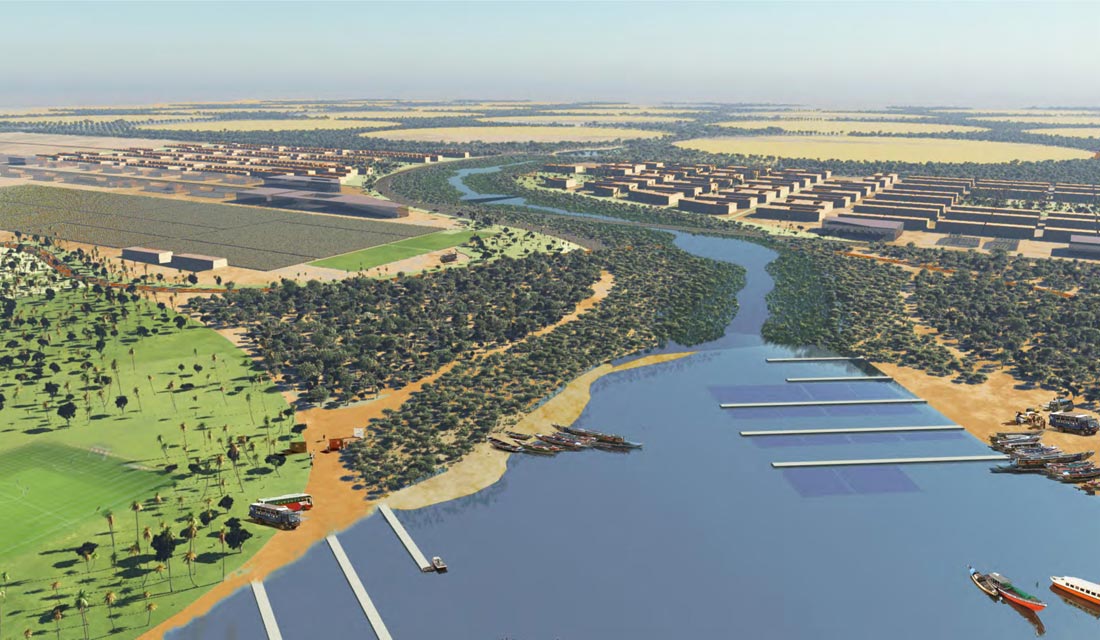 A Model for Agribusiness Cities

The masterplan comprises a landscape component that is geared towards agricultural and ecological functions and a human settlement component that deals with the residential, industrial, and institutional districts, including the infrastructure that connects them. The masterplan is specific to the 2,000 hectare area that it directly engages (informed by workshops with village representatives and other local actors) and is also designed to be adaptable as agricultural operations grow in the future. The flexible and dynamic nature of the plan’s principles also make it a model for agribusiness cities in other locations. 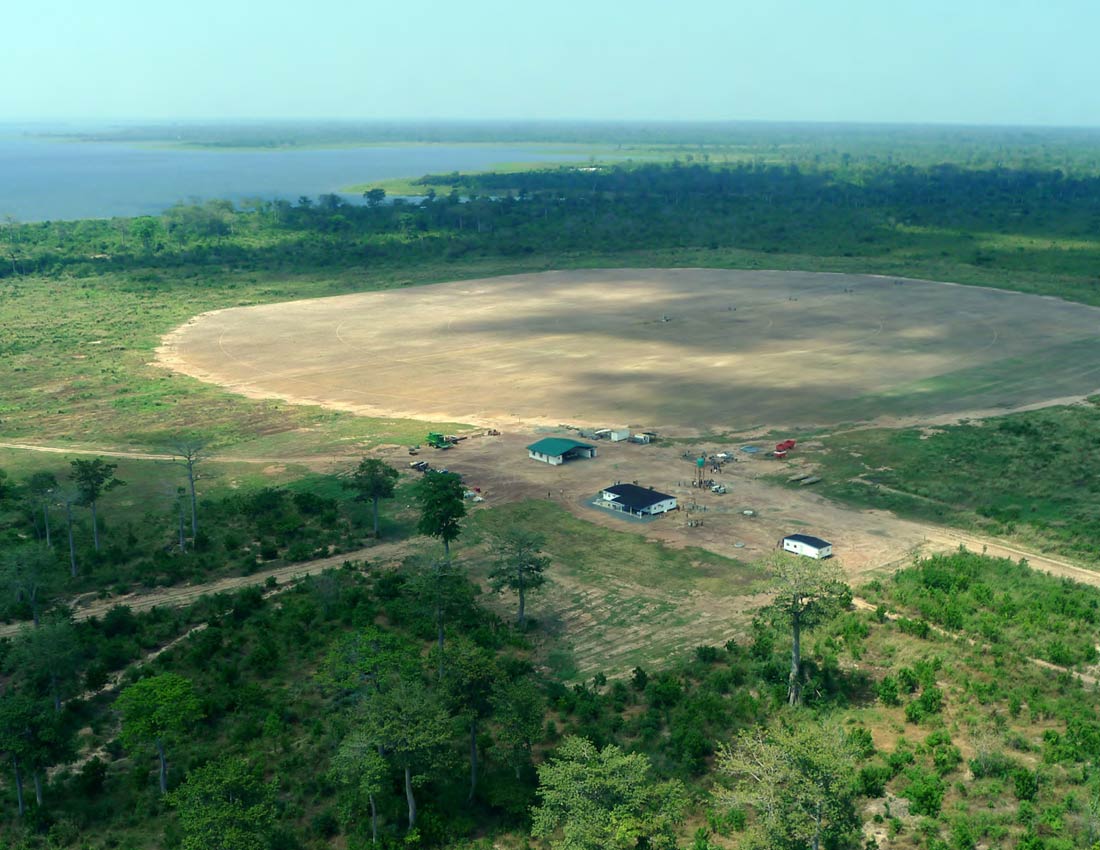 The landscape portion of the plan focuses on four primary goals: pollution reduction, soil and water conservation, increased biodiversity, and the integration of recreation. Reducing pollution and conserving soil and water require capturing runoff that contains toxic chemicals and eroded soil particles. Alternating east-west berm spines and swales are positioned between each pivot row. The water that drains into the spines irrigates new forests, which in turn prevent further soil erosion. The berm spines, besides conveying water, serve a second function as roads to allow tractor access to the pivots. The water that drains into the swales passes through the wetland finger filters. Here, water is filtered before draining into Lake Volta. At the edges of the finger filters there are recreational football fields, which are integrated into the floodplains, coastal trails that link existing villages, and a buffer zone between the new settlement and the coast, which protects biodiversity.

Within the Knowledge Center District there are two additional major landscape features: the Shade Bosque and the Plot Park. The Shade Bosque is a promenade with multiple rows of trees that provide shade and pedestrian connections and other community programs. The Plot Park is a strip of agricultural land for student and faculty experimentation.

The density and layout of the pivots is in response to the contradictory desires to maximize agriculture (dense packing) and to maximize ecological effectiveness (sparse packing). A healthy 60m buffer zone between pivots enables the berm and swale spines and permits a total of 24 pivots on the site. Three wetland finger filters are proposed, which occupy a total of 48 hectares (3% of the watershed) to produce water treatment and biodiversity benefits without creating a significant area of seasonally barren land.

The various landscape components of the masterplan – including the berm spines, swale spines, and wetland finger filters – work as a sustainable interconnected system to collect and treat runoff, trap eroded soil, reestablish vegetation and wildlife, create protective zones around the water bodies, and allow for water reuse. 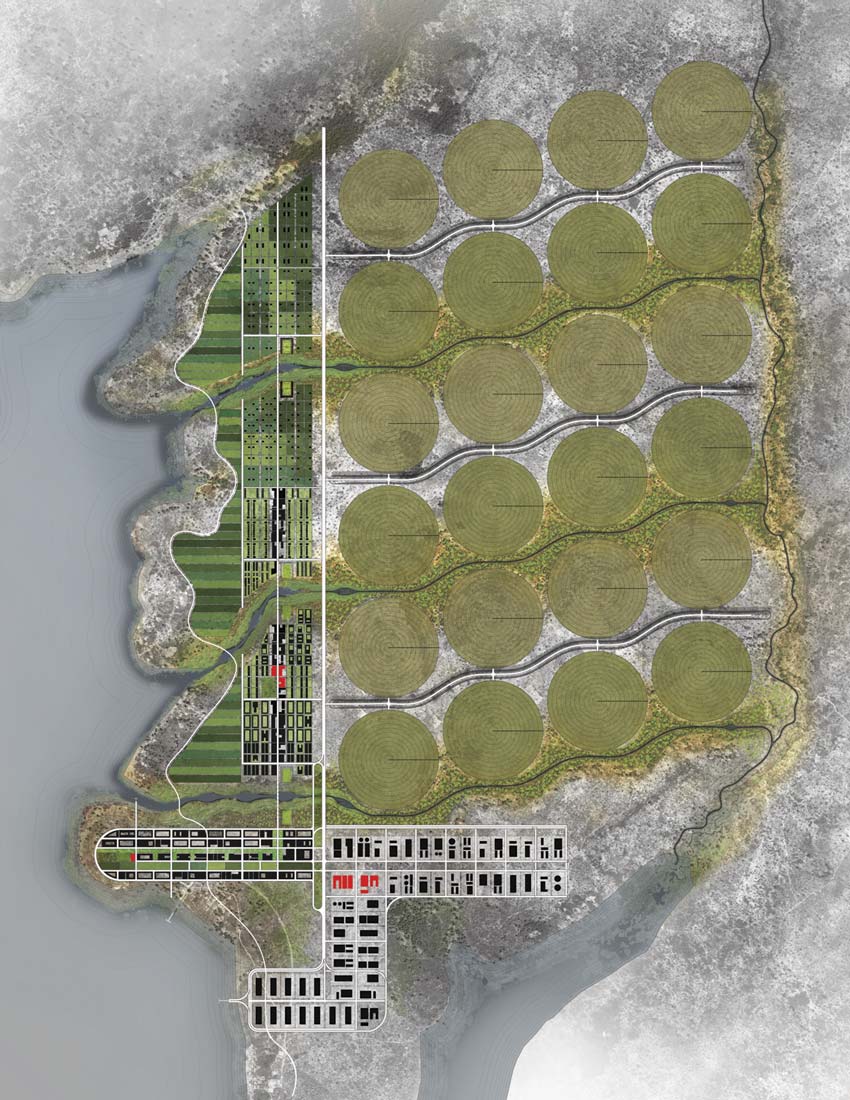 The proposed spatial scheme accommodates the existing settlement with a buffer zone for expansion around villages, followed by a transitional zone between villages and the new urban grid. These zones create a 3-band system which imprints social and economic mobility into the spatial strategy. New infrastructure connects these zones and incorporates existing settlements into new urban districts.

The overall design scheme incorporates four main districts. The districts provide a variety of densities and programs that could adapt and accommodate future growth. The four districts are defined as the Knowledge Center District, the Farmstead District, the Residential District, and the Industrial District. Each district includes an anchor building and civic landmark to trigger growth and expansion.

The Farmstead District consists of plots that house surrounding working families and accommodate students graduating from the Knowledge Center in the development of their own farms. It follows the 60m grid dimension with a flexibility that allows for the plots to vary in length and composition. The Residential District also obeys the 60m grid, allowing for various building typologies and densities, and consistent communal spaces. The commercial and green strips provide recreational and logistical uses to residents and workers, with the Market Building acting as the central civic space. The Industrial District is located with strategic points of access to the Logistics Road, effectively connecting it to farming facilities and the southern port.

The main infrastructure sets forth a hierarchy of movement corridors. The many routes create an efficient and variable network between each district and the masterplan as a whole. A main trunk line carries the bulk of goods traffic between the farm, the industrial district, and the port, with minimal overlaps with regular urban traffic. A commercial road runs parallel to the trunk line with regular connections and terminates at a separate dedicated port in shallower water. A finer grained grid system is utilized in the development zones to allow for flexible growth as needed. The plan also proposes a coastal trail, which connects different fishing villages along the lake and connects to the knowledge center hub and the local and commercial street system. 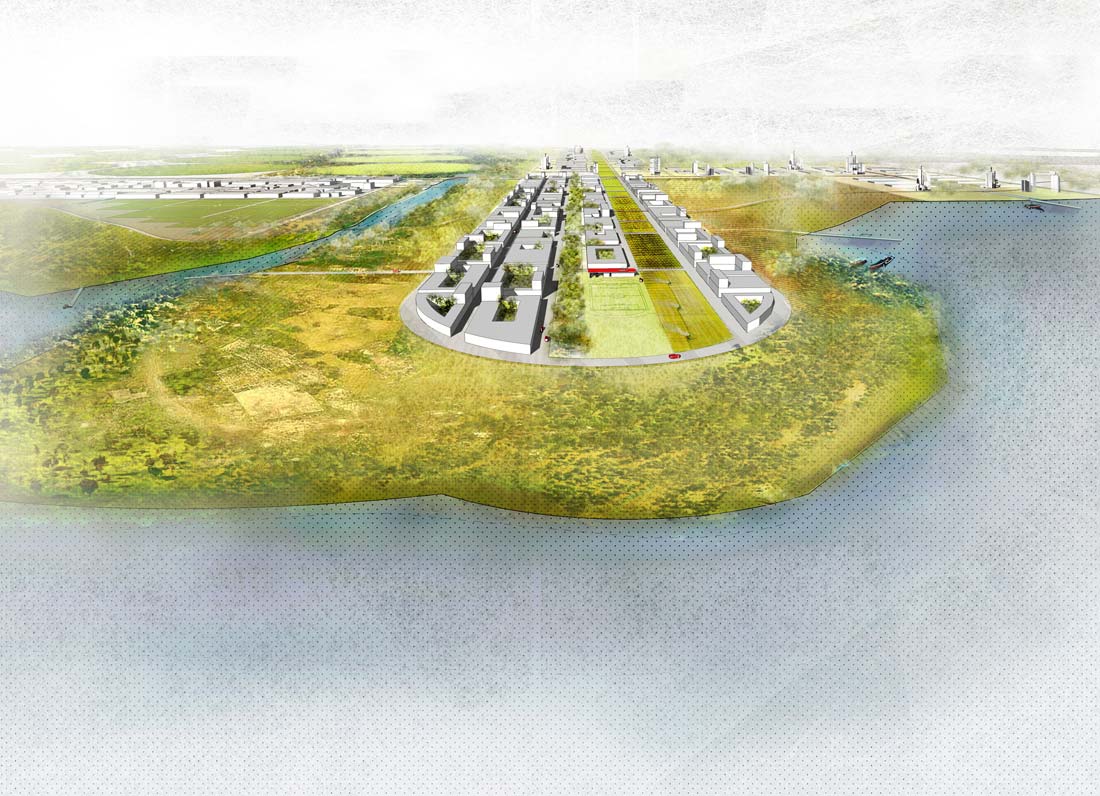 The Knowledge Center building is the pilot research and development facility designed to house 24 residents, consisting of researchers, scientists, and guests, and common areas, including assembly rooms, offices, kitchen and dining, and recreational facilities (gardens, patio, soccer field, swimming pool). The architectural solution was informed by site-specific material and construction techniques, the building program, and the location. The building is organized into zones with varying spatial and climate-sensitive gradations: individual/ communal, small/ large, open/ closed, light/ dark. Every space or room is nested within a still larger space or room, with each transition between the layers serving a spatial and climatic purpose. 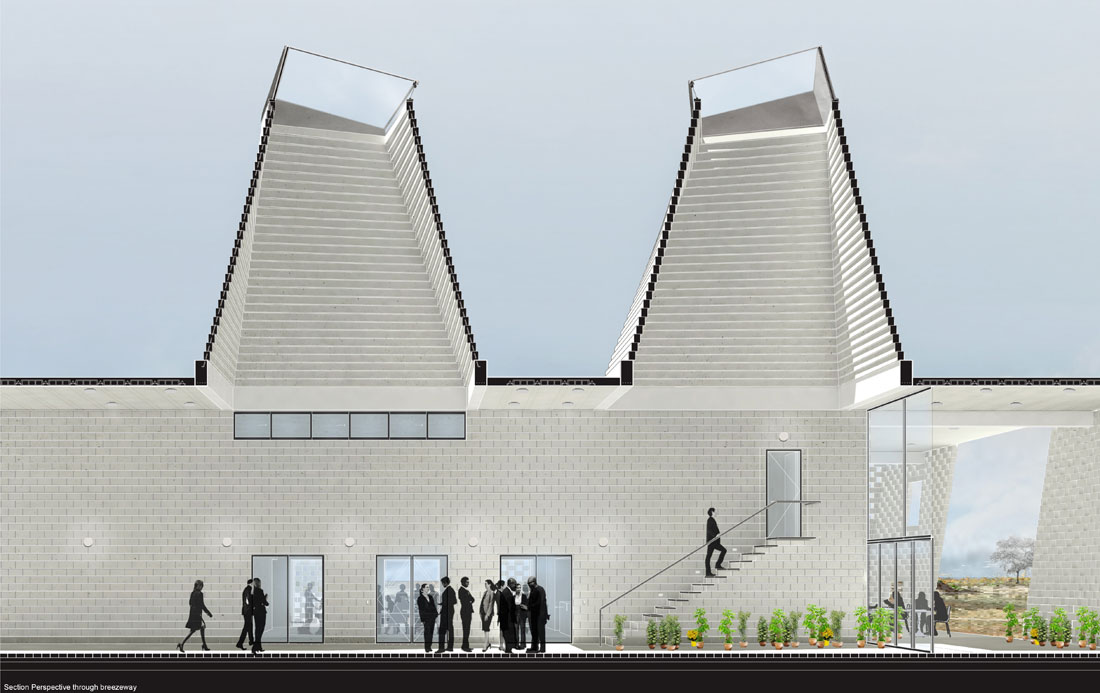 The outer skin, built from a “net” of concrete blocks, is the first de­marcation and separation from the landscape, and it acts as a screen from direct light and rain. The outer skin also increases air pressure to draw breezes through the facility. The angular, hyperbolic façade and openings are carefully calibrated to the changing solar paths, balancing the needs for shading and views. Equatorial high noon sun shines on the north and south elevations for one half of each year. The solar strategy prevents low angle sun (6-9am & 3-6pm) from heating the thermal mass behind, while the angled roof overhang ensures that high angle sun (12pm) hits the ground before reaching the next layer.

The next layer is an 80cm thick load-bearing concrete block and rubble infill wall. Direct light rarely touches this layer, and its thick­ness keeps the night-cooled interior air comfortable throughout the heat of the day. An insect net spans between the breaches in this layer making all outdoor “gardens”, “porches” and “breezeways” livable for an entire 24-hour period. All individual interior spaces open onto one of these shared and protected outdoor areas, many of which are capped by a giant pyramidal cone, further encouraging the prevailing winds to funnel through the shared outdoor areas, as well as allowing diffuse light to enter deep into the building footprint. The interiors are most removed from the climate, with each given a fan and a point-of-use air conditioner, a window for cross ventila­tion, and a view looking out toward the landscape. 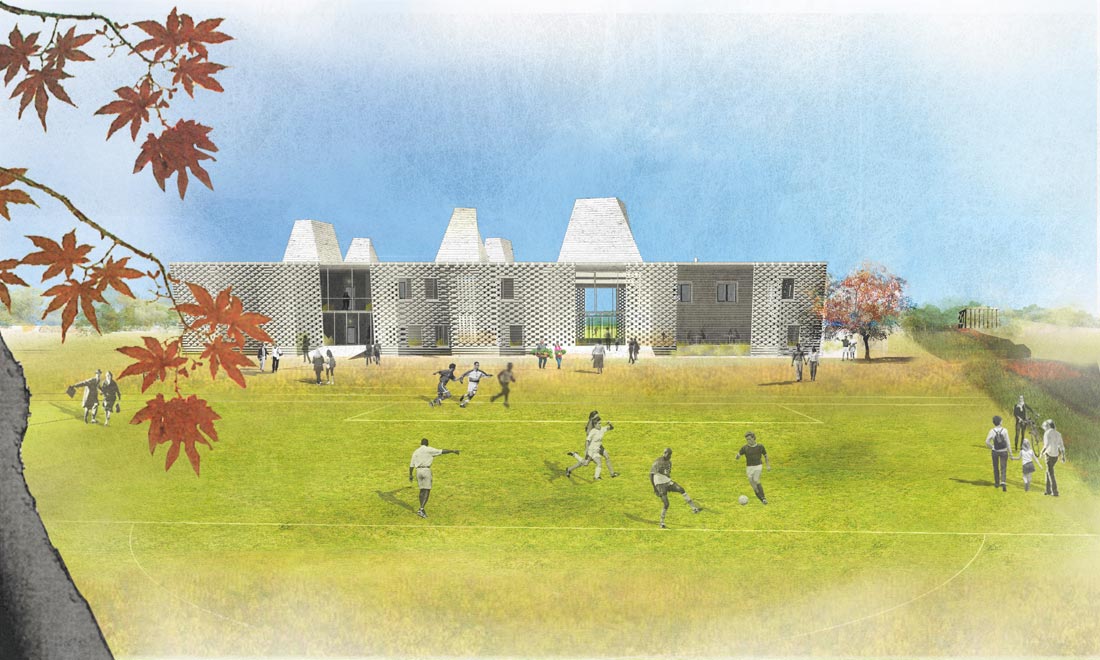