Plasencia Auditorium and Congress Center: Between the Town and the Country 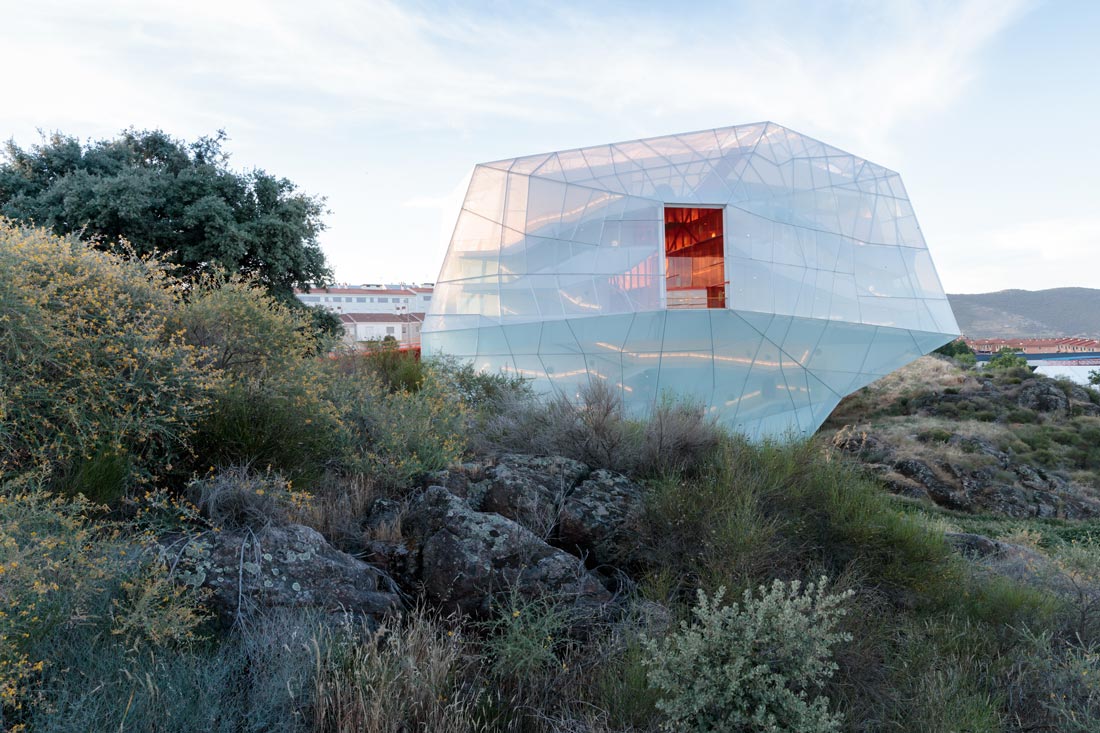 Having chosen the second option, we found ourselves forced to situate the buildings on a much lower level than the street, due to the considerable height difference between the two worlds. The artificial world had created a 17-m-high embankment that covered the natural contours, now buried below. In reaction to this unstoppable submission (“sous les pavés [les 17 metres de pavés], la plage”), we decided that our solution would show a maximum respect for the land, resting on and covering the least possible area of the allotment. We plotted to make this building set the stage for a different method and preserve an island of natural earth in the future expansion zone, even if it meant being a small puddle in the sea, as a possible reagent for the rest of the constructions to come, which will find themselves insinuated and become beached similarly in this whiffed sea: the Extremadura countryside used as an equivalent for the ocean. Forget-me-not. We like the name of the flower, and also the fact that it is a flower. 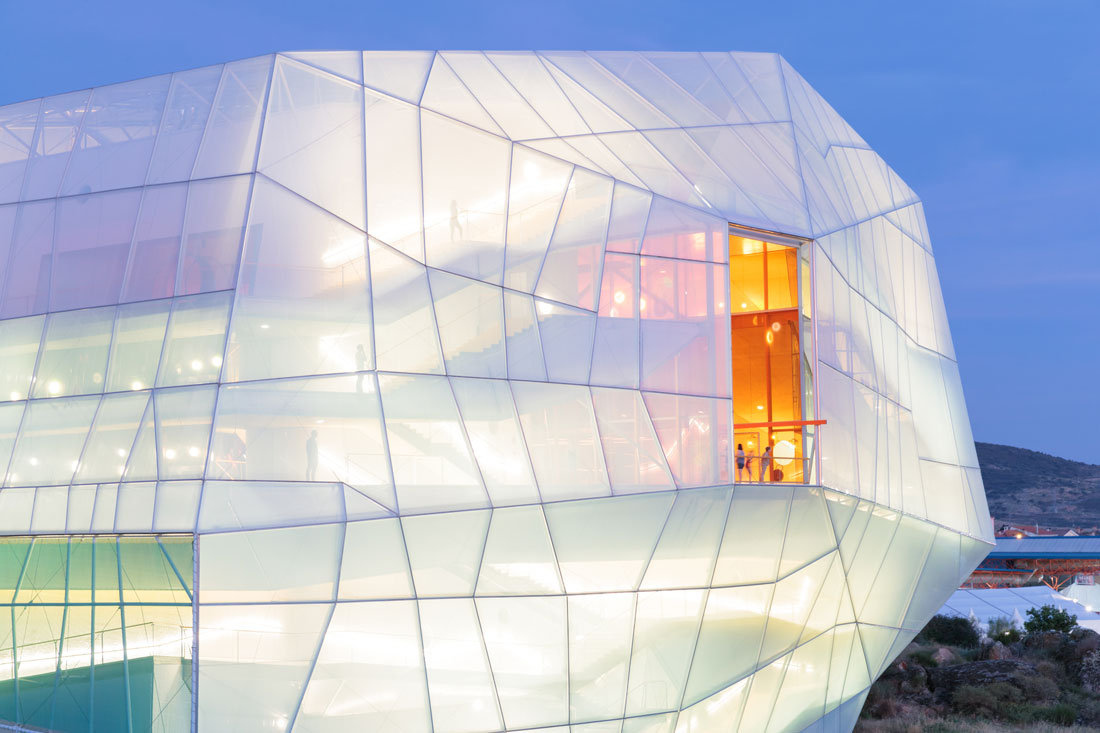 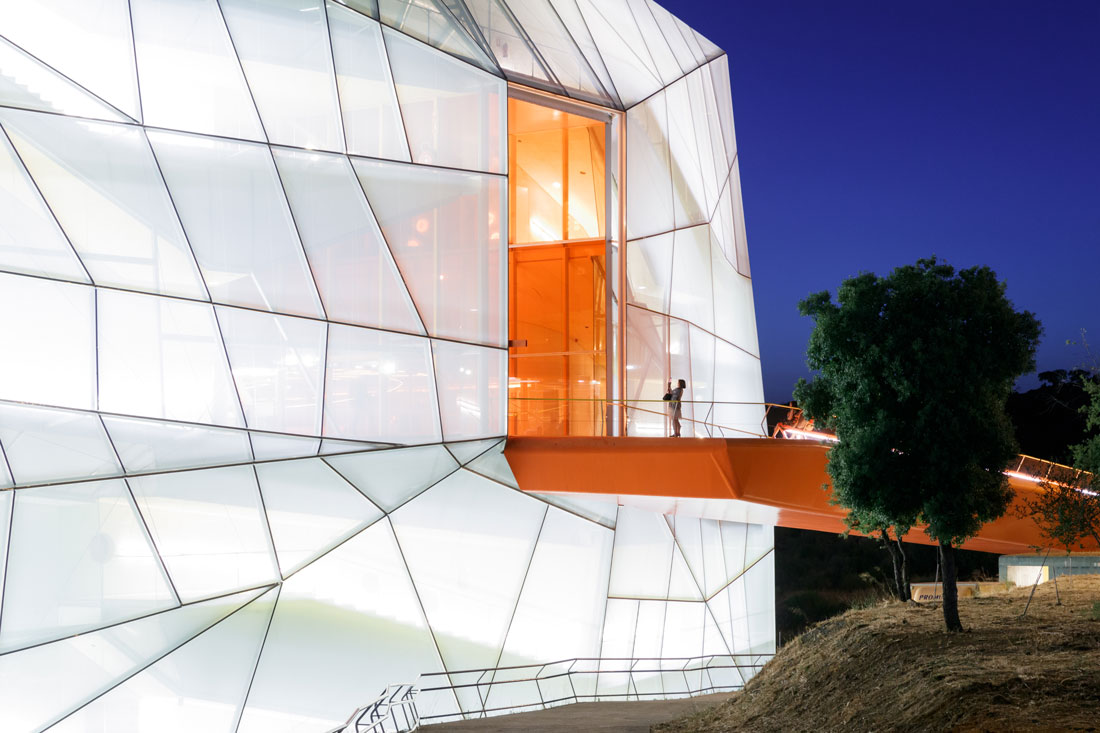 The Salamanca highway, the former Silver Route and the future Silver Motorway as well, all run past the western side of the allotment, which also has the best views of the Gata Range. The building will be visible in the distance from an entire western perspective, from north to south. It will be seen when passing by at high speed in a car, which is why we have planned it as a snapshot or a luminous form, acting as a sign for passengers by day and by night, playing at being a correspondence between sensation and reality, between the position it seems to be heading for and the position from where it will move. 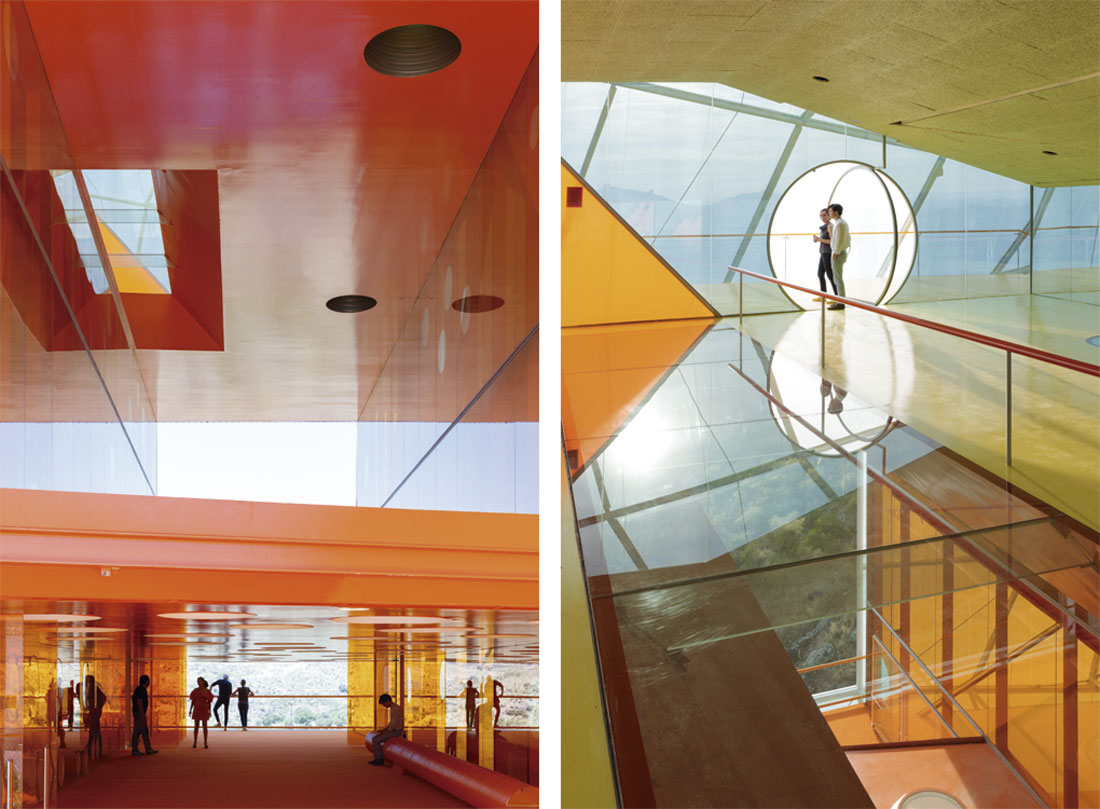 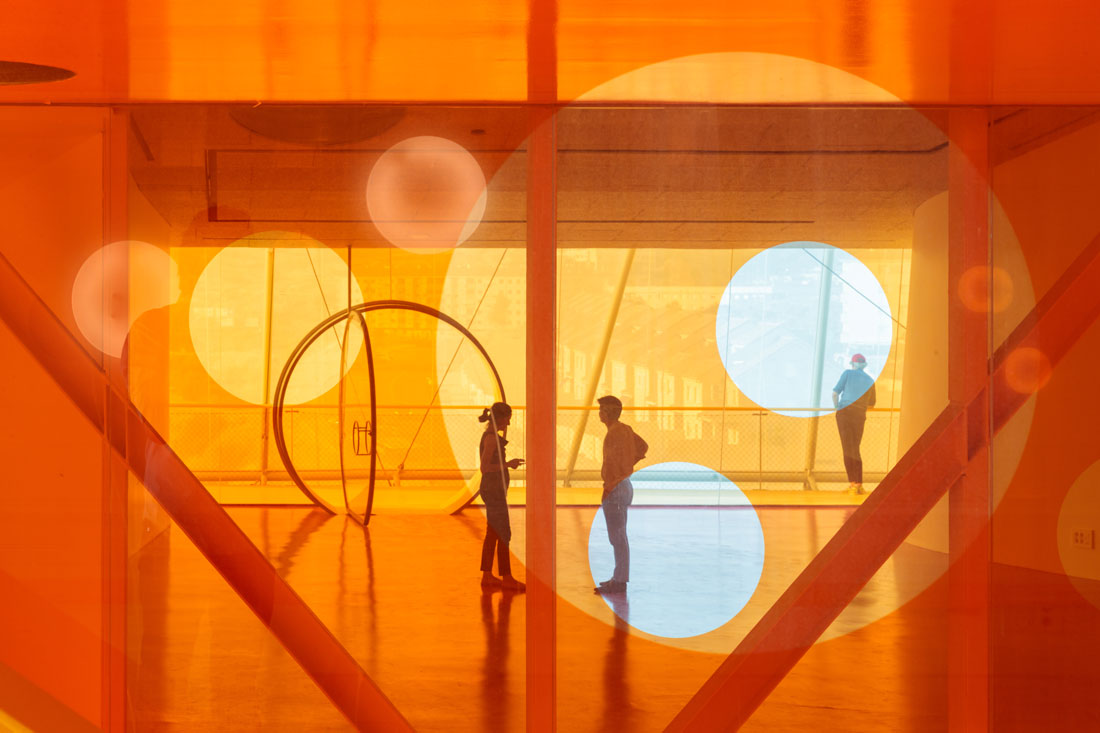 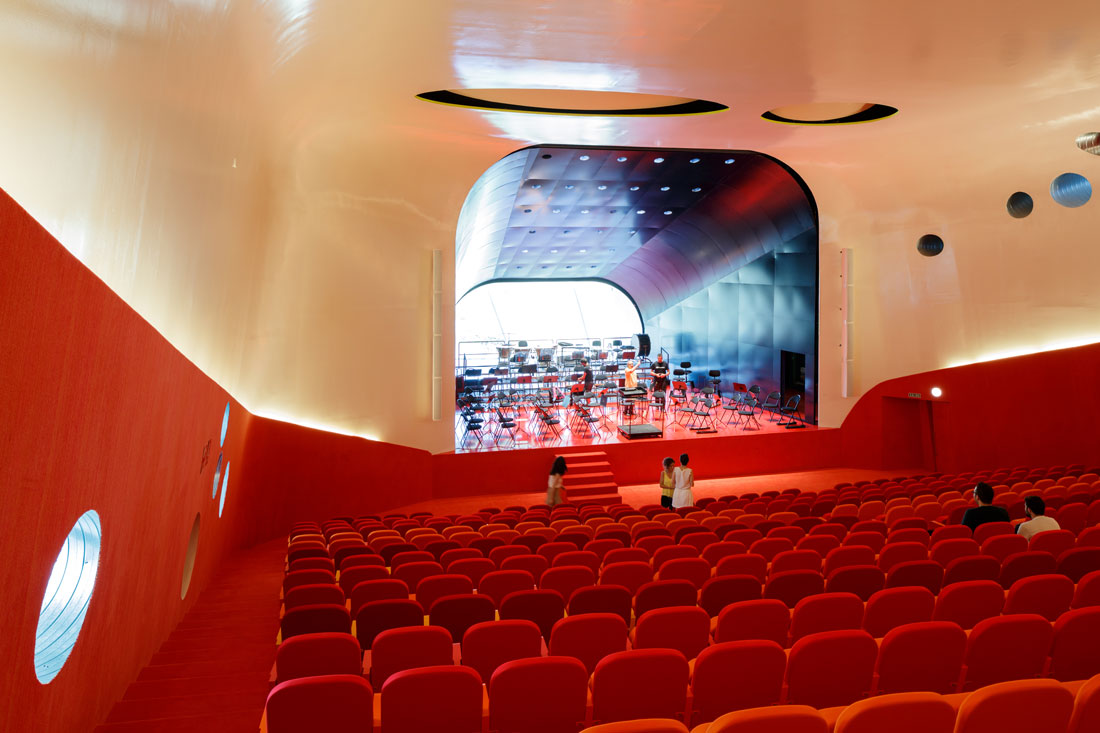 Forget-me-not…tell me if its final aspect triggers in you the same reminder as George Sand’s for Flaubert, “Do not define the form, don’t bother…” The form of ours is due to the building’s section – due, as we have said, to the idea of resting the smallest possible part on the ground, which corresponds to the stage area and the seating in the main hall. The section of this hall is what continues to define and complete the form by superimposing the rest of the brief on top of it: the entrance lobby, the secondary hall for 300 people, which can be divided into three spaces for 100 spectators each, the exhibition halls and the restaurant area. The entrance is on the urbanized street level, more than 17 meters above the lowest part of the building, via an orange gangway that arrives at a 12 m deep vertical canyon in the same color, where the views of the countryside, the spurs of the Gata Range, are accentuated. From here, it is possible to move all around the central concrete shell, going up or down a series of ramps and spiral staircases that mingle exterior and interior spaces. This is for two reasons, economy and expenditure: economy through not climatizing or using glass to enclose certain parts; and expenditure due to a crossing of spaces – in-out-in on account of the mixture of their climates. 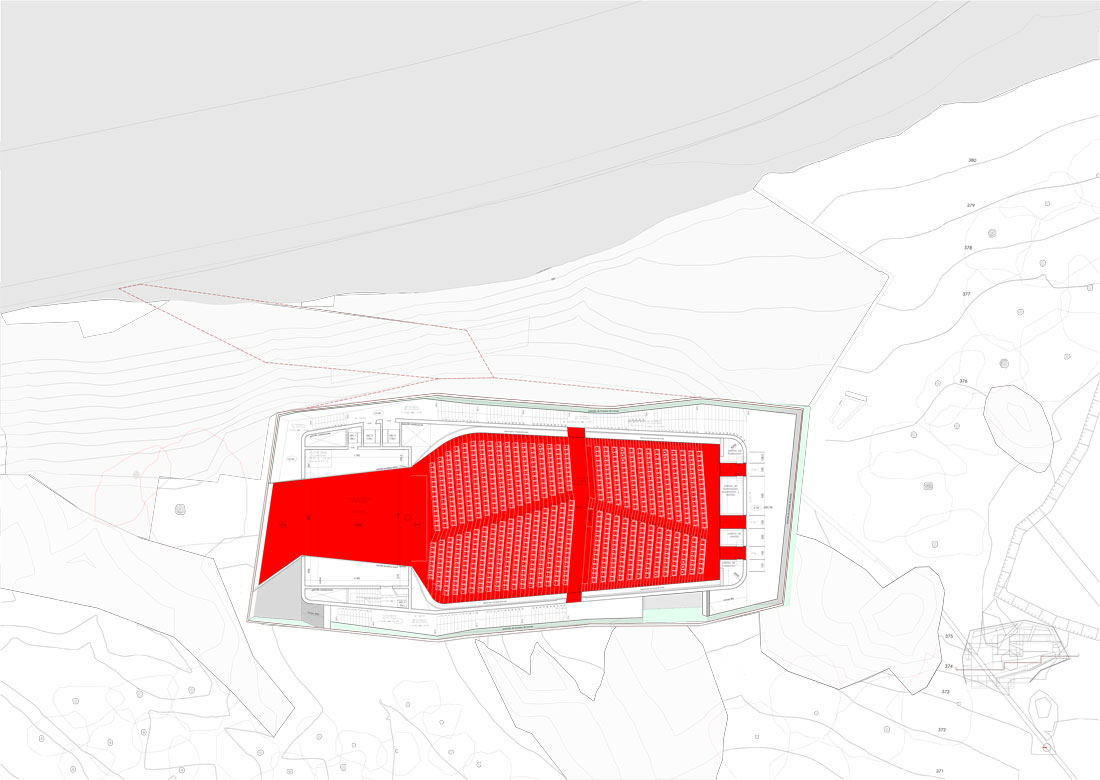 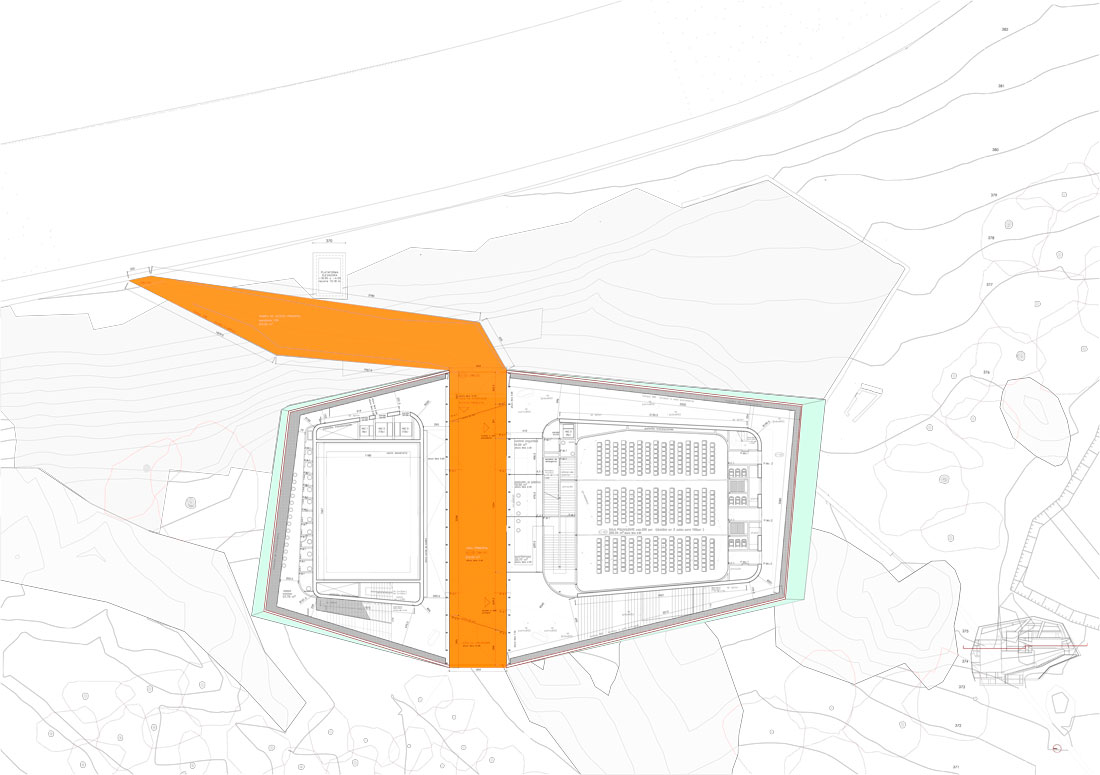