The Living Garden project is a residential and apartment house (with commercial use) in the Aspern Seestadt, one of the largest urban development projects in Europe. It is located in the north-eastern part of Vienna. This new district is very well connected to the railway stations, airports and historical centers of the twin cities Vienna and Bratislava. 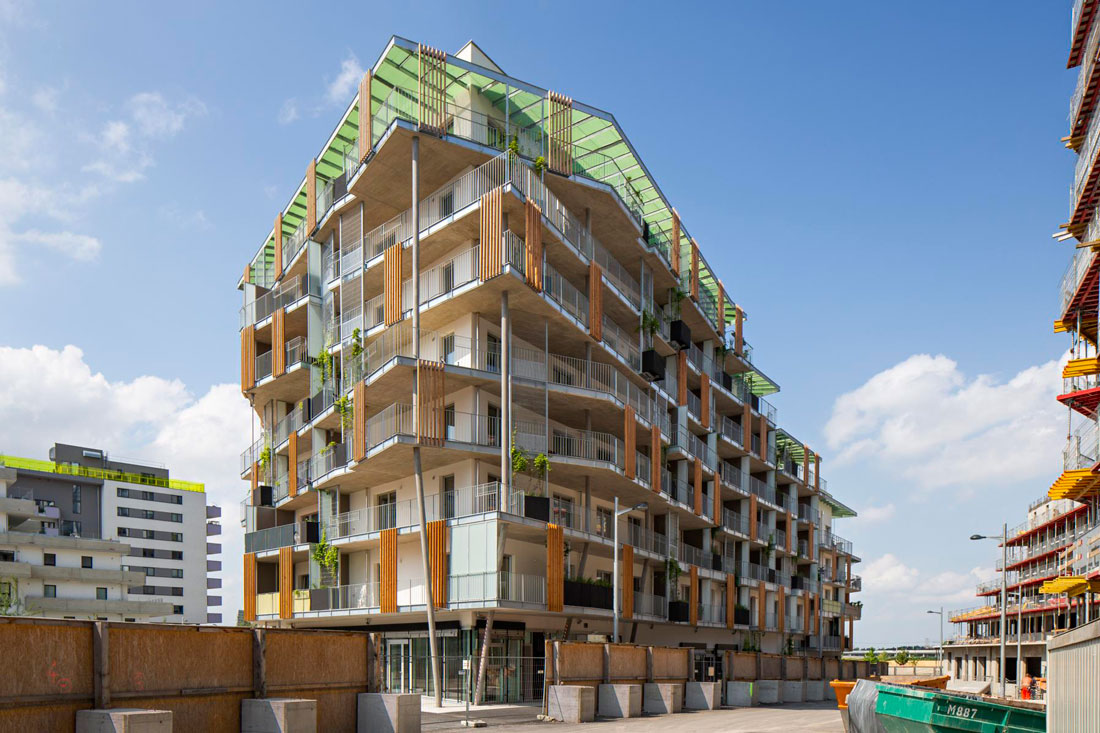 The Living Garden project (J3B) is designed as a green, sustainable building. A central idea of the project is to bring nature as deeply as possible into the city and offer the inhabitants and residents a green lung. In addition to the pleasant climate (oxygen, shading, wind protection), the building is also meant to be a green building for the residents and the surrounding neighborhood. The conceptual core is the forest (the open space in the courtyard), the green vein (the ramp along the façade), the leaves (the generous terraces) and the green skin (the façade). 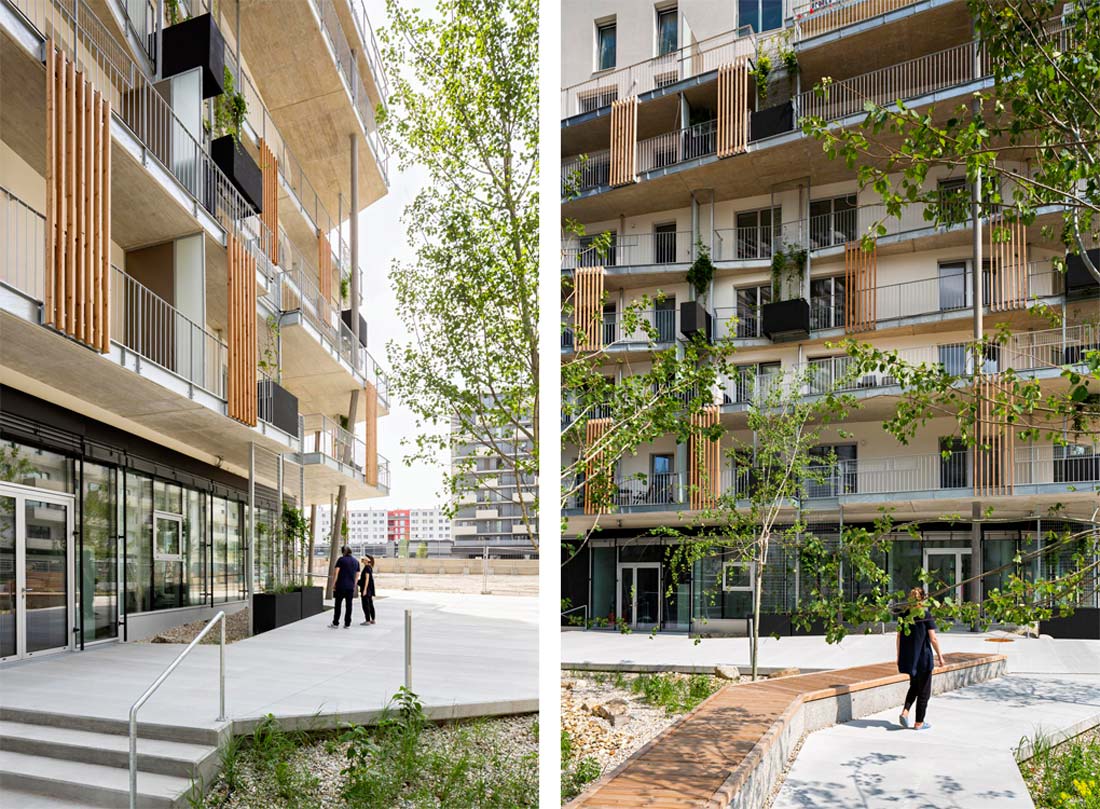 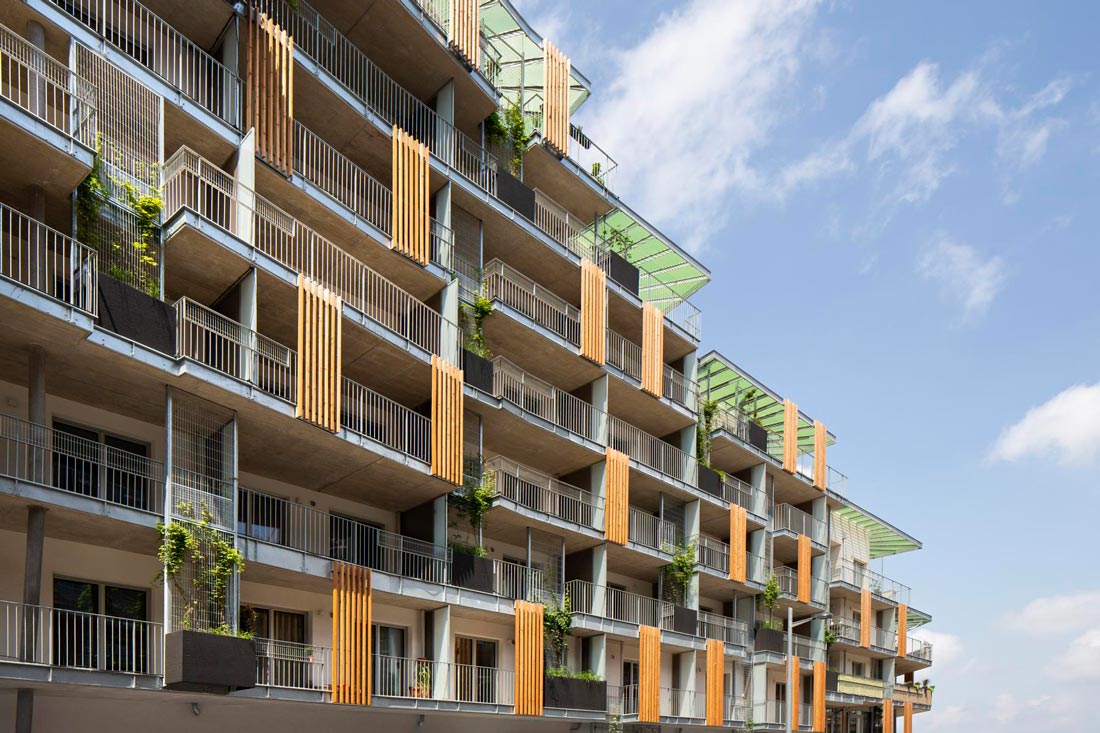 The ground floor zone is generously glazed, with shop windows, shops, pubs, bicycle rooms and access to the lobbies of the three stairways. They open onto 37 apartments and 19 apartments, respectively. The dwelling types are, for the most part, single-story “through flats” or over corner, dual-oriented apartments. In the graded part of the building are apartments (triple-oriented) with balconies and generous roof terraces planned. 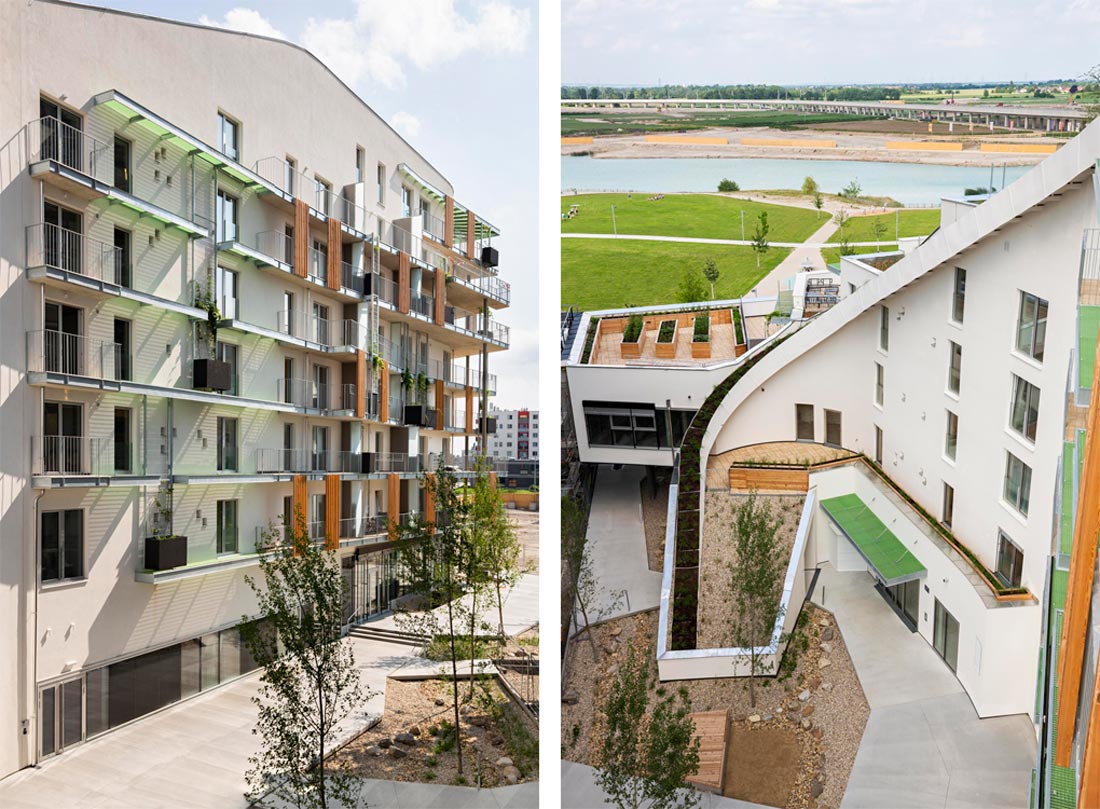 From the outdoor area in the courtyard, with a playground and lush vegetation, the green vein that rises along the façade connects the green terraces and opens onto an intensively green roof. From these terraces the inhabitants have a wonderful view to the Lake of the Seestadt. On the largest terrace, above the first floor, areas for urban gardening are provided. 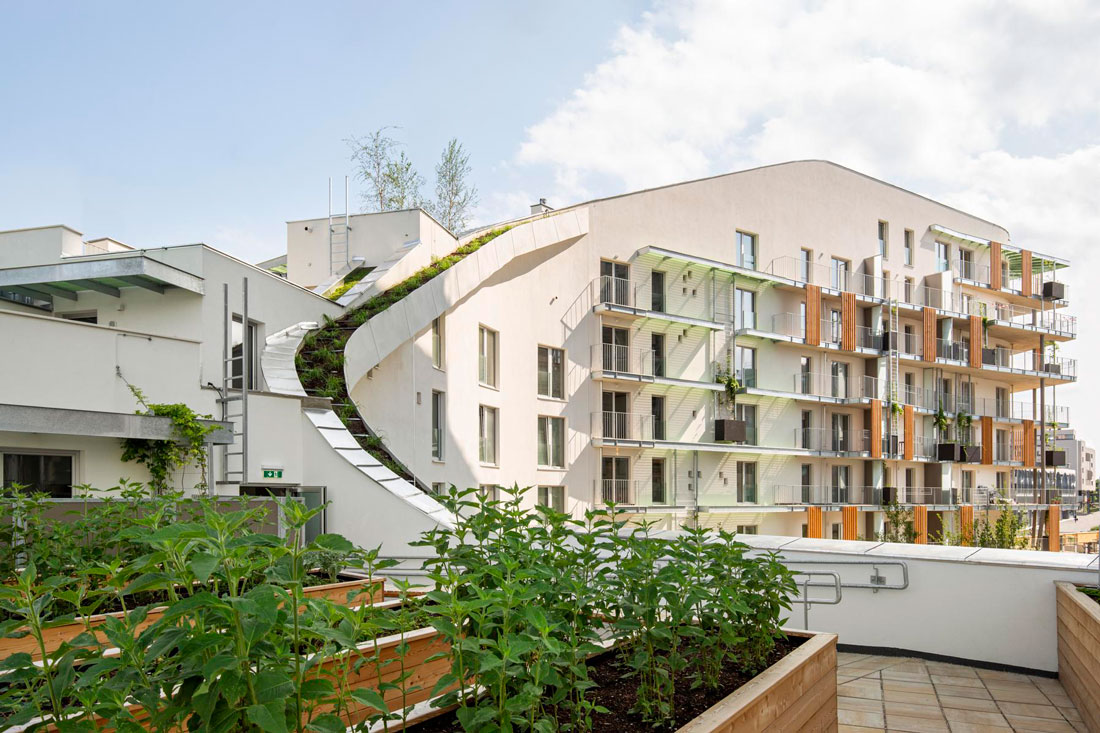 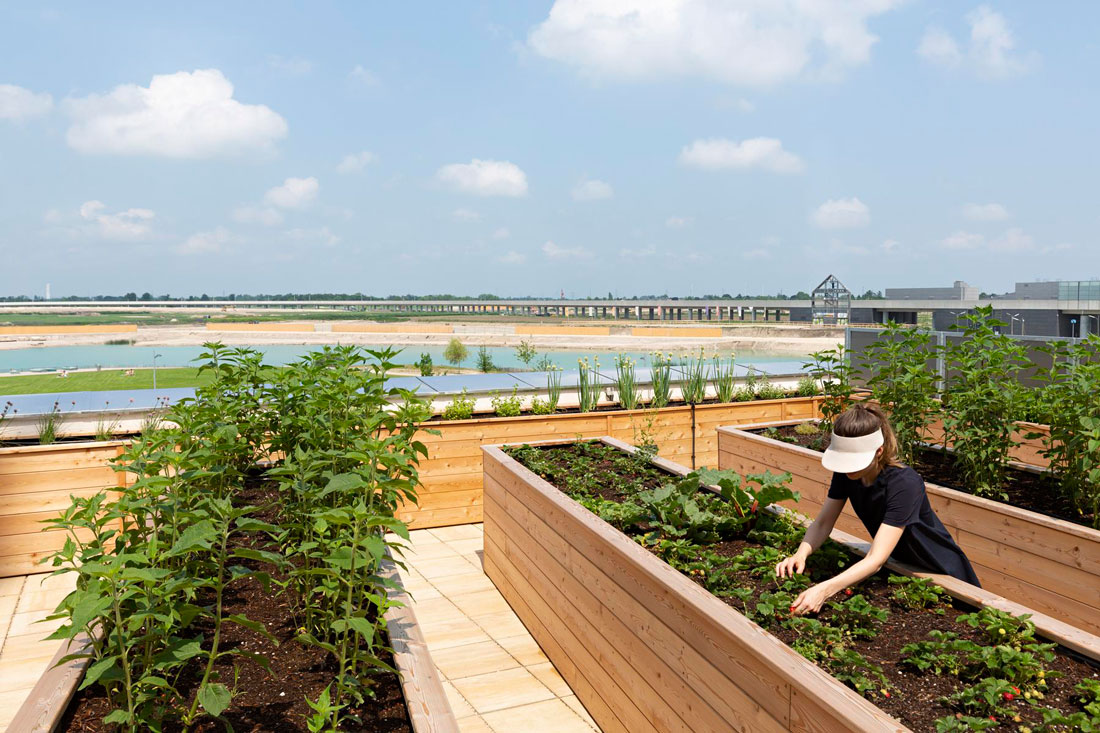 In front of the apartments there are spacious balconies for circulation, set up as a buffer zone. For these balconies, we had the fleeting idea of a pueblo: a strong, archaic form – a pueblo that does not work as a subtraction, but as an addition. Thus, these additional spaces gained are a plus in areas that provide added value for the resident; they are “priceless” in the truest sense of the word. In these vertical connections of the balconies, new interlocking living areas are created. These additive regions first stretch along the xy-axis and then expand into the z-axis. This creates communicative areas on the border to the public space (street/square), which function as an interior space between inside and outside – an added value for the user and an enrichment for the urban space. Of course, these areas are also programmed conflict zones, but we assume that residents can anticipate this added value. 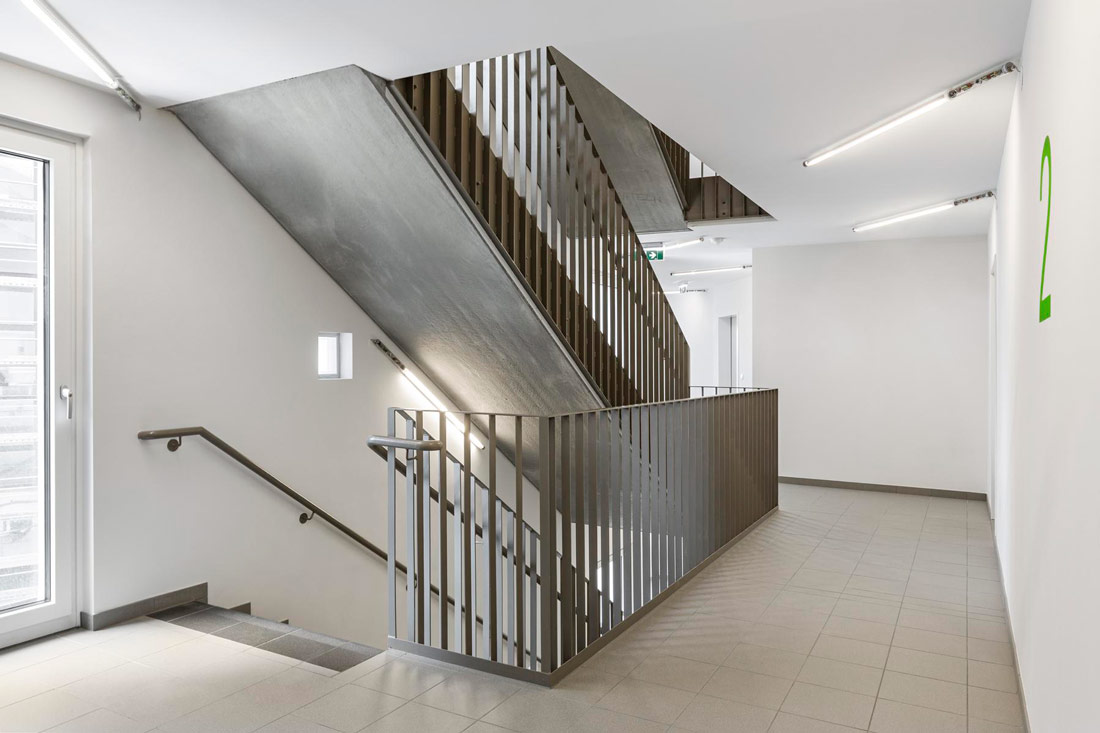 On the one hand, these zones can be used, with their vertical green and green pergolas, as a retreat for the residents and, on the other hand, as a communicative zone in the so-called capillary (surrounding streets). This vertical, green skin is created by planters placed on the balconies (including irrigation) from which the vegetation develops vertically along the façade and continues horizontally via pergolas. The green façade is maintained every six months from the outside.