Overground railway stations constitute a brusque interruption of urban continuity, leaving an empty space in the city that often brings social segregation with it. Undergrounding the tracks with the station at street level, conversely, is an opportunity to develop a new project that restores connectivity to uncommunicated areas, creating a large, central public park on which the station roof makes its geometric, topographic imprint. 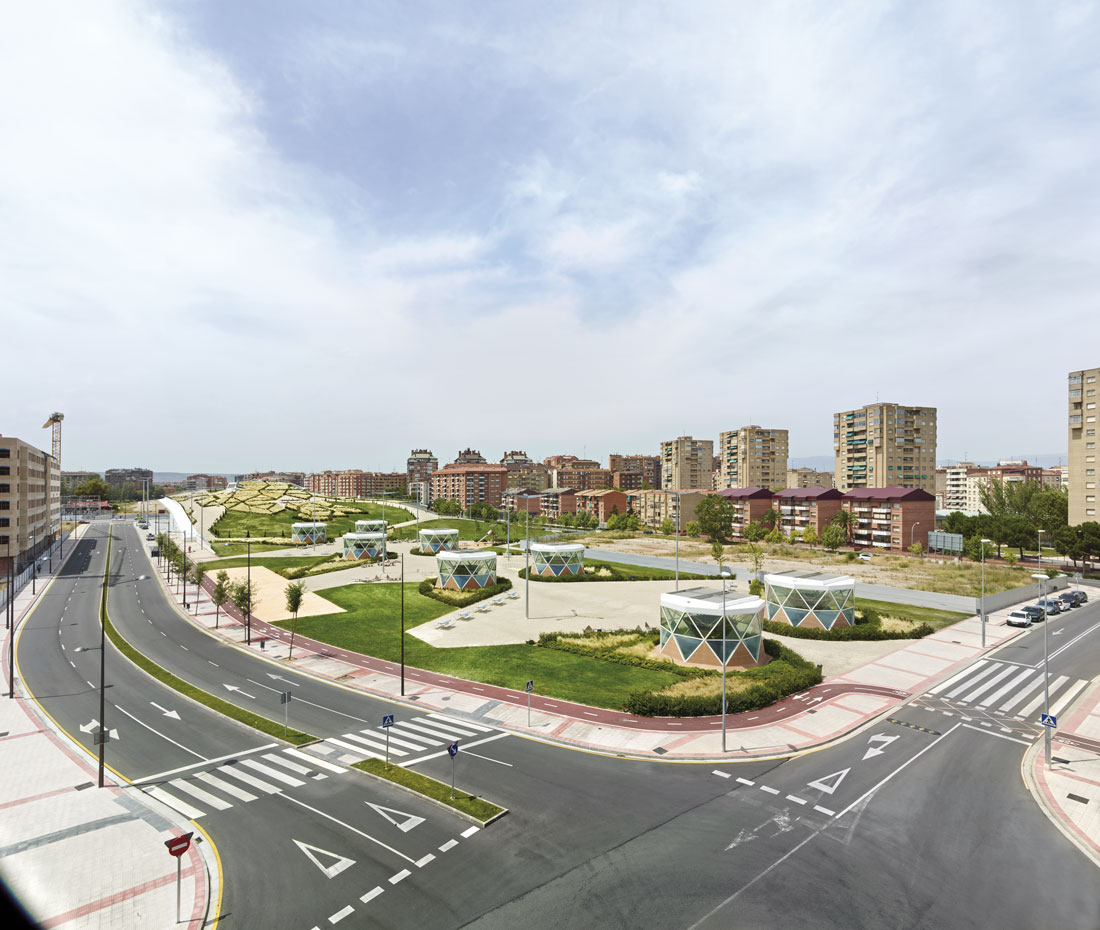 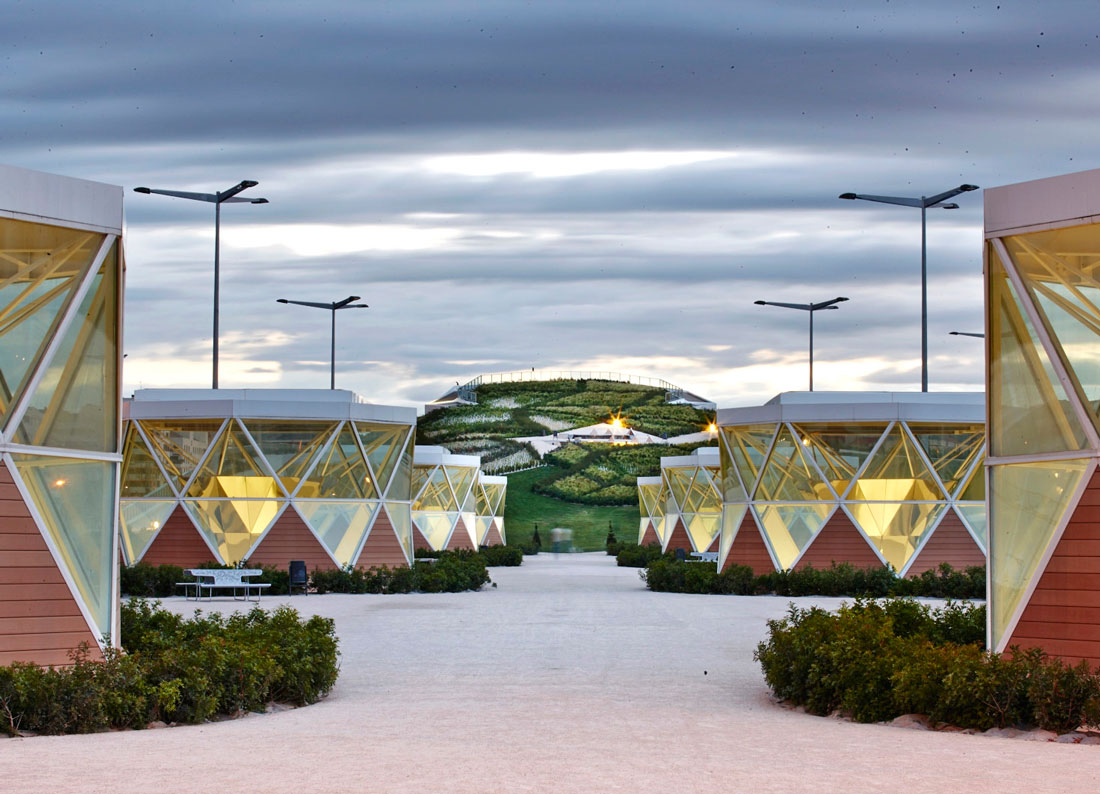 Around the park, a series of residential and commercial developments draw together the disconnected fabric, and five svelte towers mark this new centrality in the city. The public transport infrastructure is used to generate a collective amenity (with no alteration to the original budget). A symbiotic system is created between the towers and the park that guarantees the energy self-sufficiency of both. In turn, the park gives the station thermal stability which, in the continental climate of Logroño, makes the volume virtually passive, allowing the inclusion of skylights and large windows that ensure natural lighting for the station and the passenger platforms. 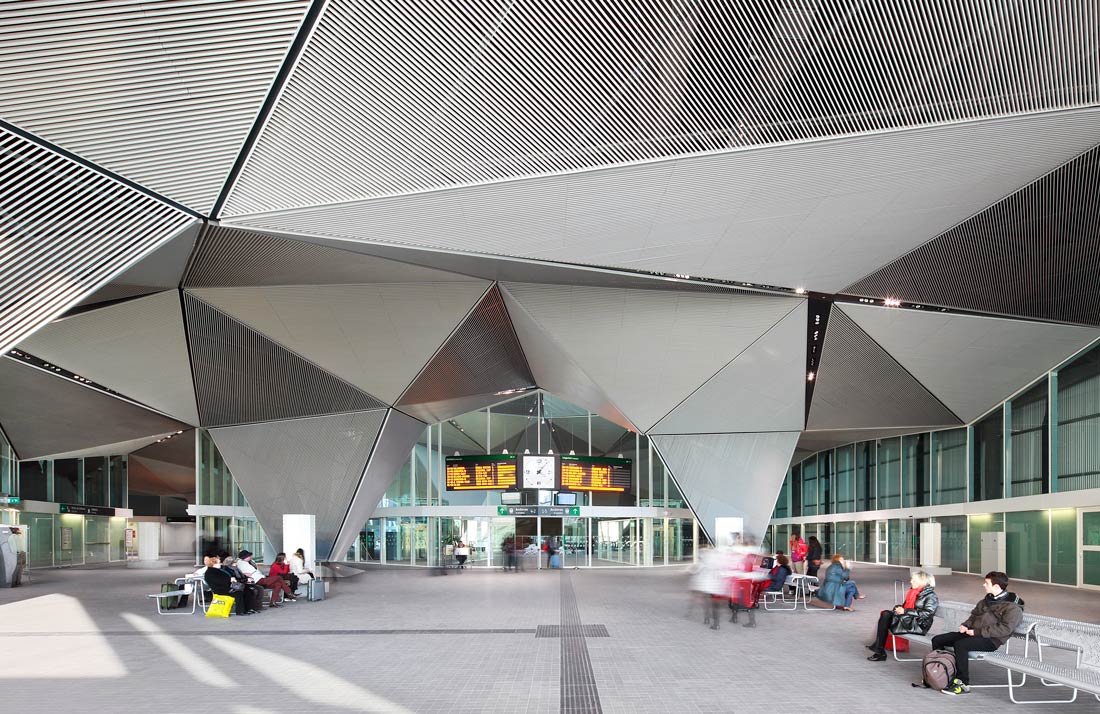 The faceted outline of the station roof corresponds with that of the landscaped roof, making them the two sides of a folded surface; while the exterior forms a small hill or vantage point over the city, the interior adopts a configuration similar to that of a cave or grotto. These references to the picturesque tradition unify the facility and its public dimension.

The structure of the station roof is the combination of the need to address the complex configuration of the tunnel of tracks beneath it, with supports in an irregular tetrahedral arrangement, and the need to maintain a regular geometry of three-metre spacing between the metal purlins that support the composite slab of the roof, configured as a hill that continues the horizontal surface of the slab over the platforms. 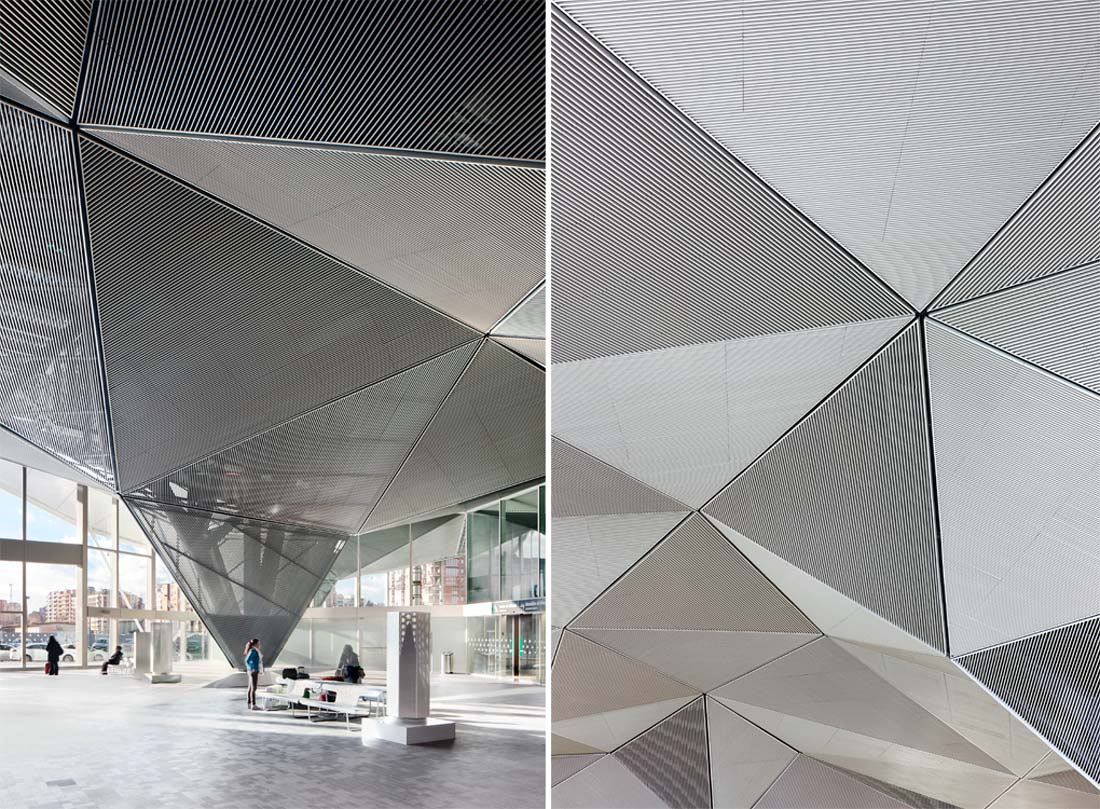 With the upper and lower surfaces in place, the structure exploits the volume between them, seeking to reconcile this fact with a distribution that is as regular as possible (maximum regularity of floor plan). 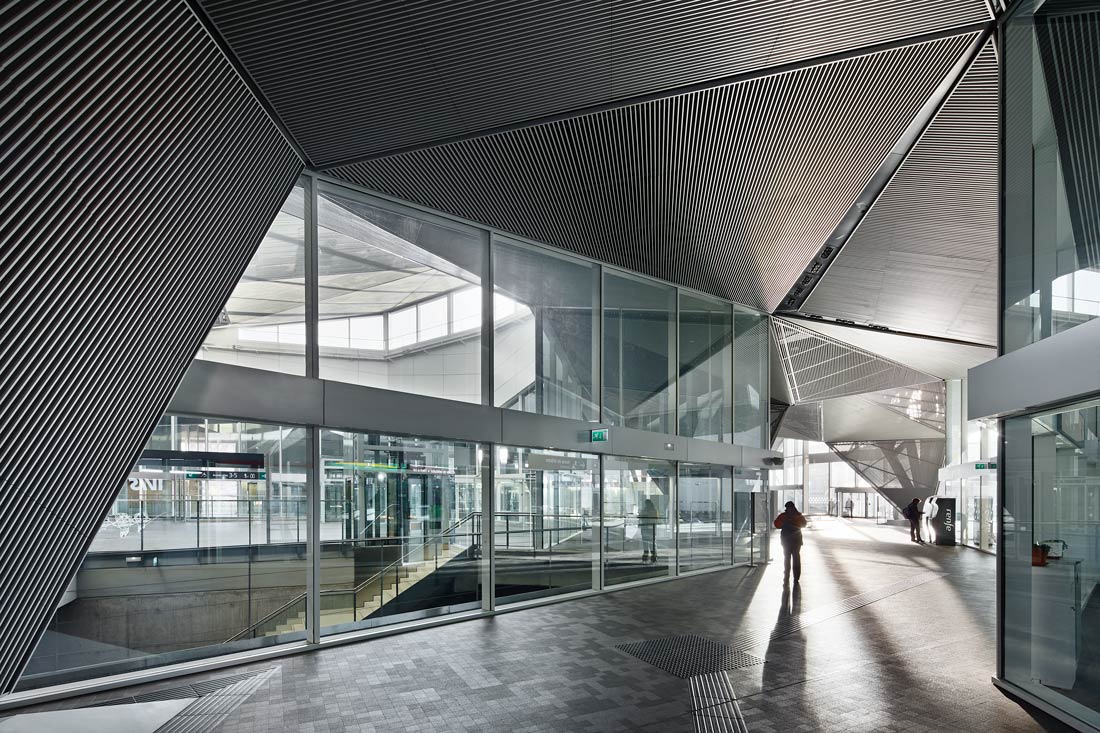 This materializes compatibility between the upper chords of all the trusses and the topographic surface of the park, and between the lower chords and pillars and the faceted surface inside. As a result, each of the trusses that form the grid (throughout the nine principal and 17 secondary alignments) presents a singularly unique geometry. 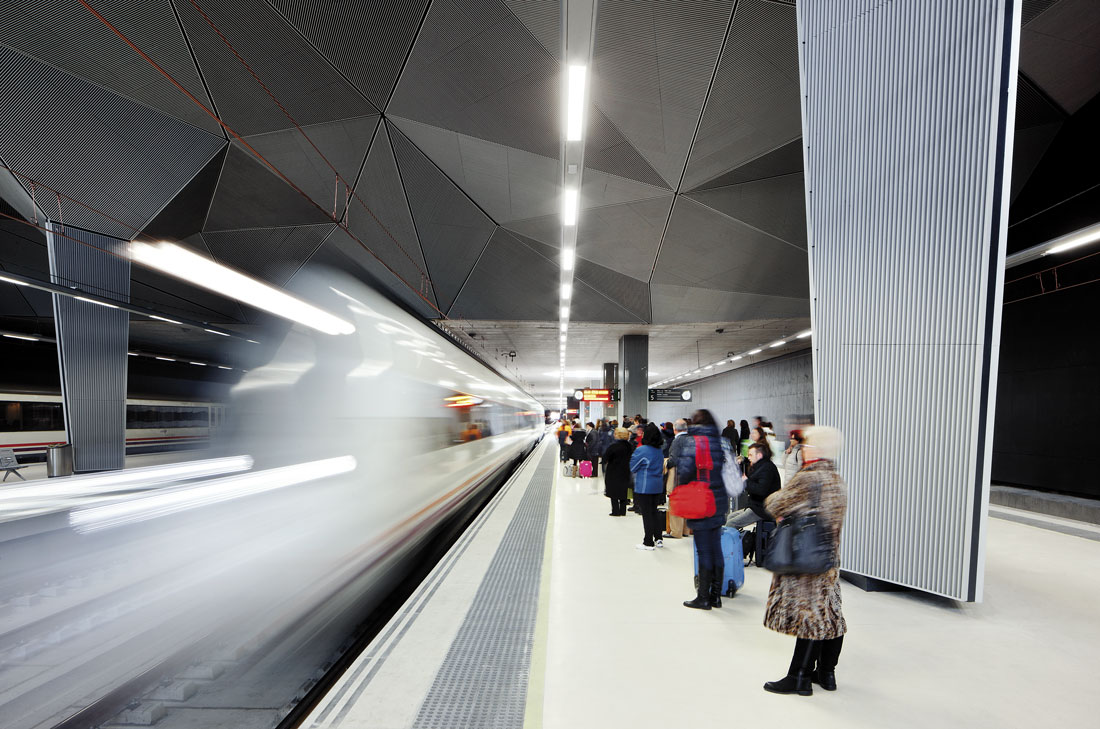 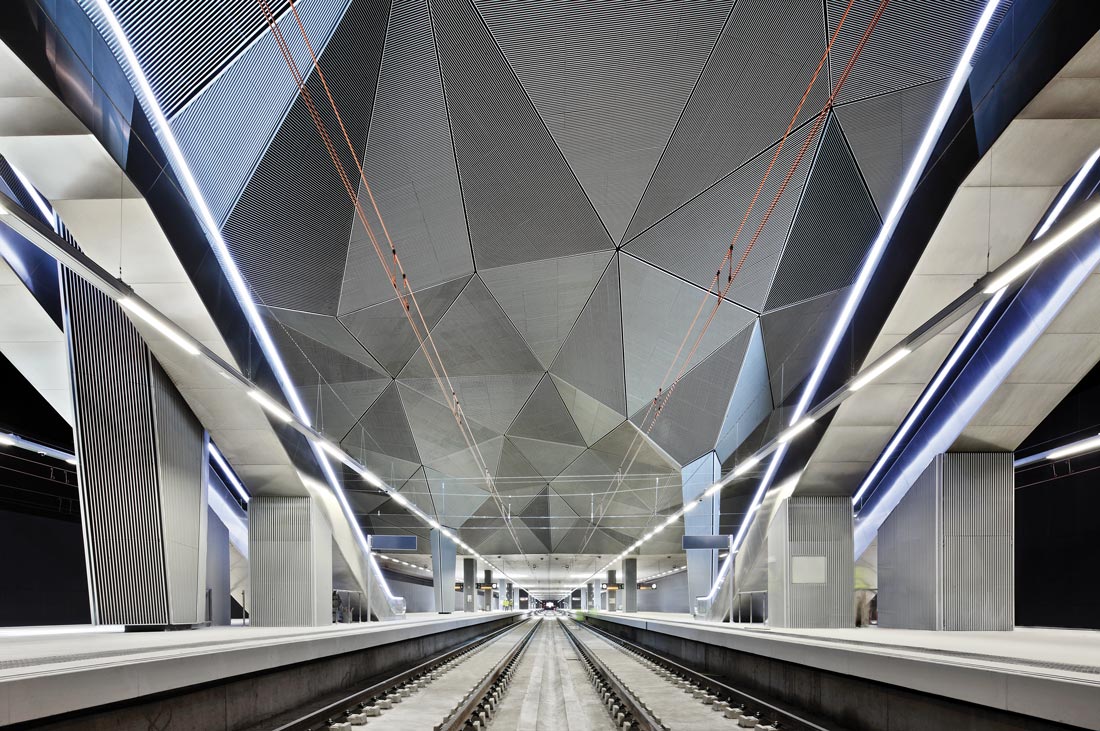 Once the structure was complete and the various technical systems (air, water and electricity) installed, an aluminium slat system was implemented to finish the station’s supports and ceilings, using 1.5 x 5 cm aluminium slats attached on site to standard 1.2 x 1.8 m frames anchored to the structure according to a model developed by numerical control. The system reveals the content of the cavity via triangular planes that vary in transparency with the movement of passengers. 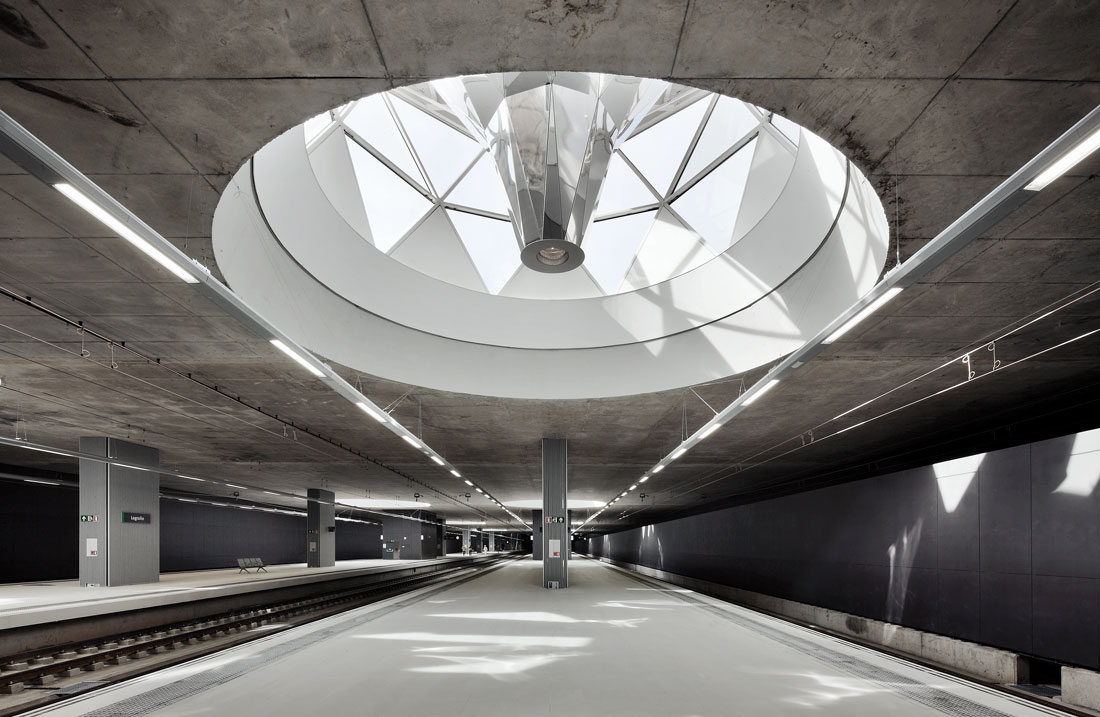 The skylights focusing on the platforms rest on the slab by means of a minimum tubular structure that serves as a support for the glazing and the opaque parts, behind which the smoke vents are housed. Inside, stainless steel mirror reflectors multiply the shifting light, breaking it down and projecting it across the platforms and lighting the park at night. 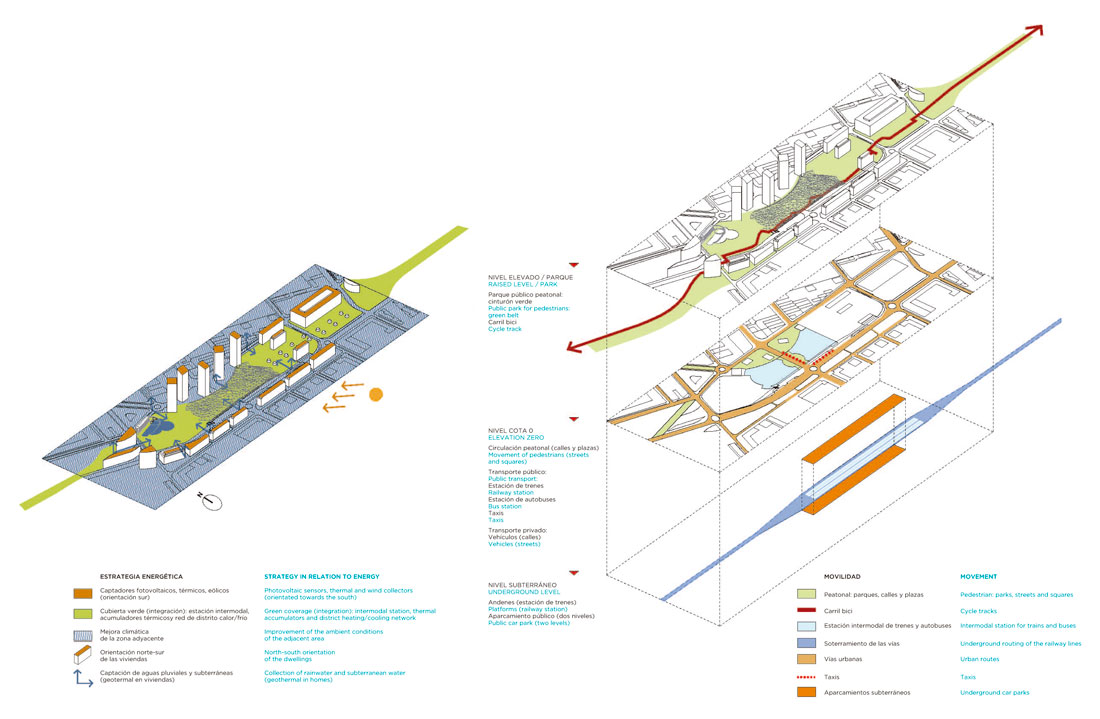 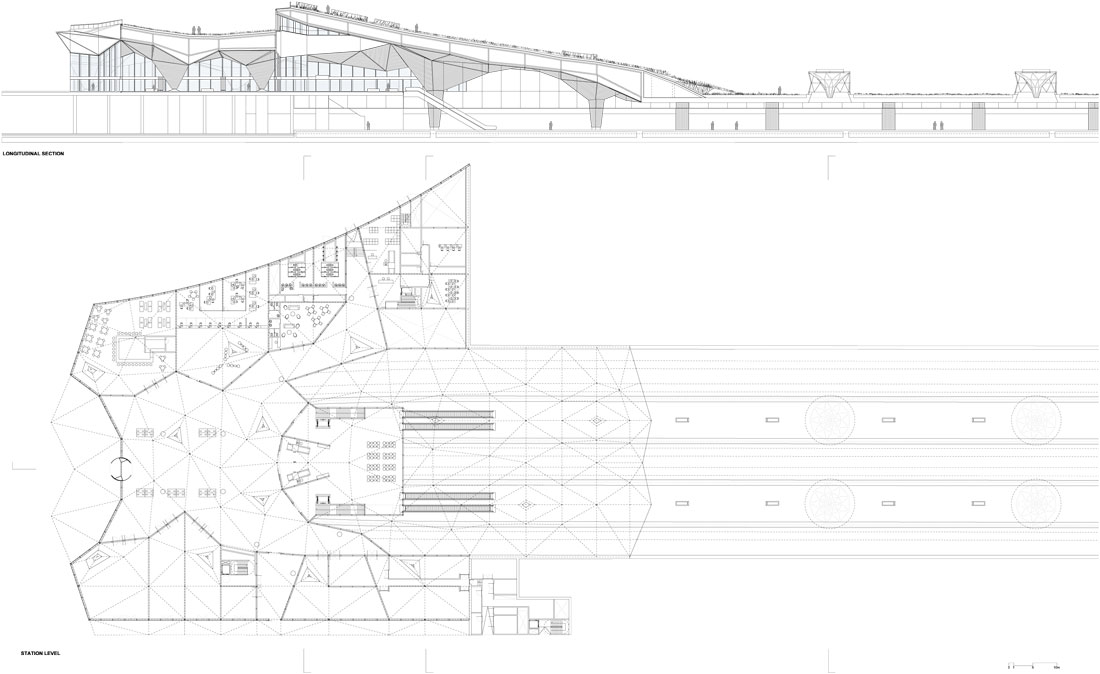 « Twin Cities: an Urban Global Phenomena
A Celebration of Travel »