The scope of the project ranges from the development of a customized functional proposal for a user that is turning over a new leaf to the rehabilitation of the structure, insulation, and facilities and the modernization of the existing construction systems. 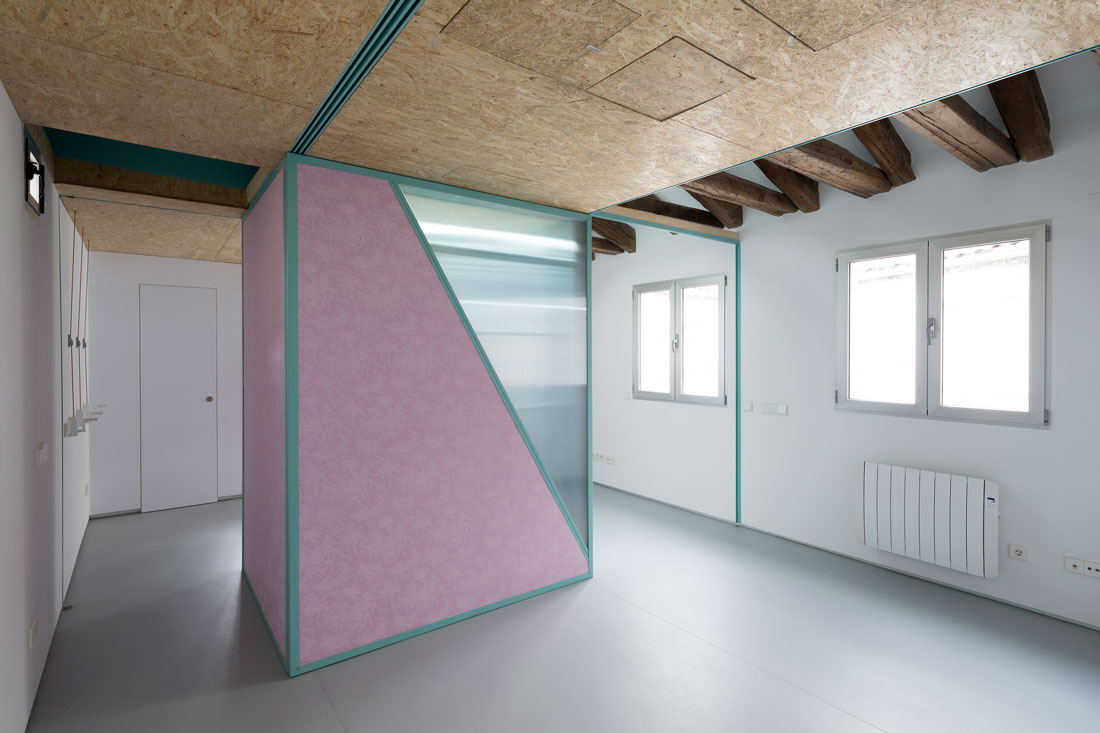 The selected approach removes all obstacles from the floor to provide the greatest possible flexibility. Two basic elements are used: first, the central core, comprising the staircase, some shelves and the larder. The core is situated at the center of the main space under the mansard roof. It connects the access floor and the space under the roof and lets the natural light coming through the roof into the living room. Second, there are two side strips for the functional elements (kitchen, bathroom, storage space and domestic appliances). This basic arrangement is complemented by two strategies that provide flexibility to the domestic spaces. 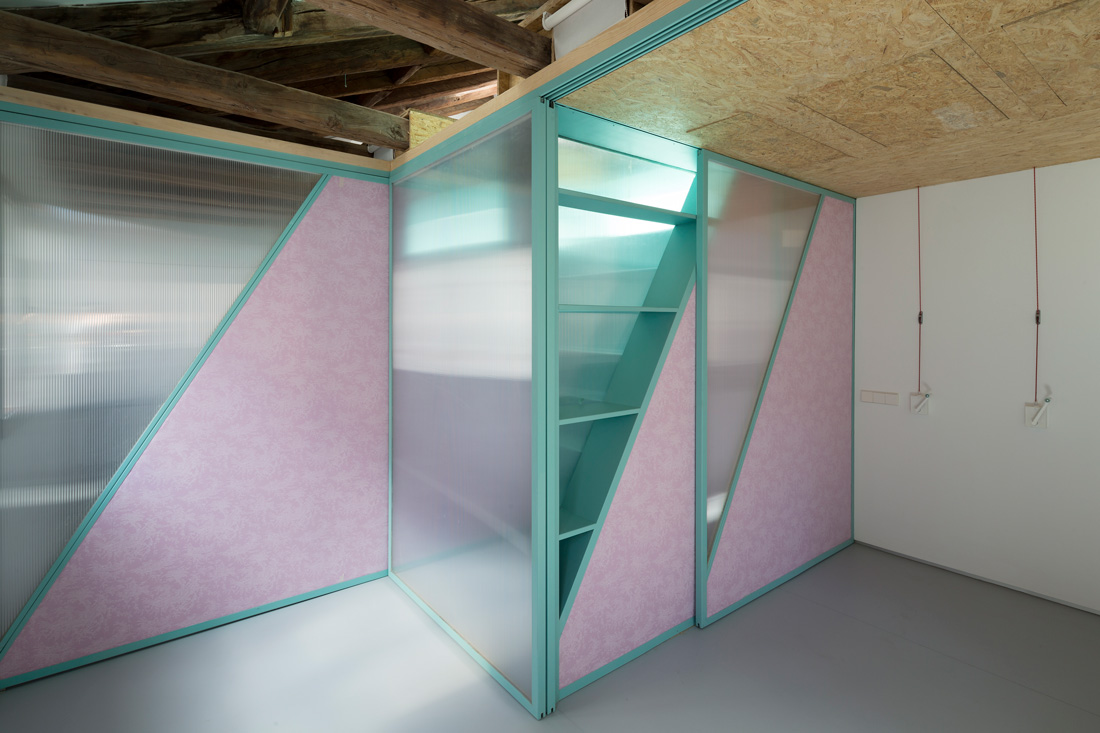 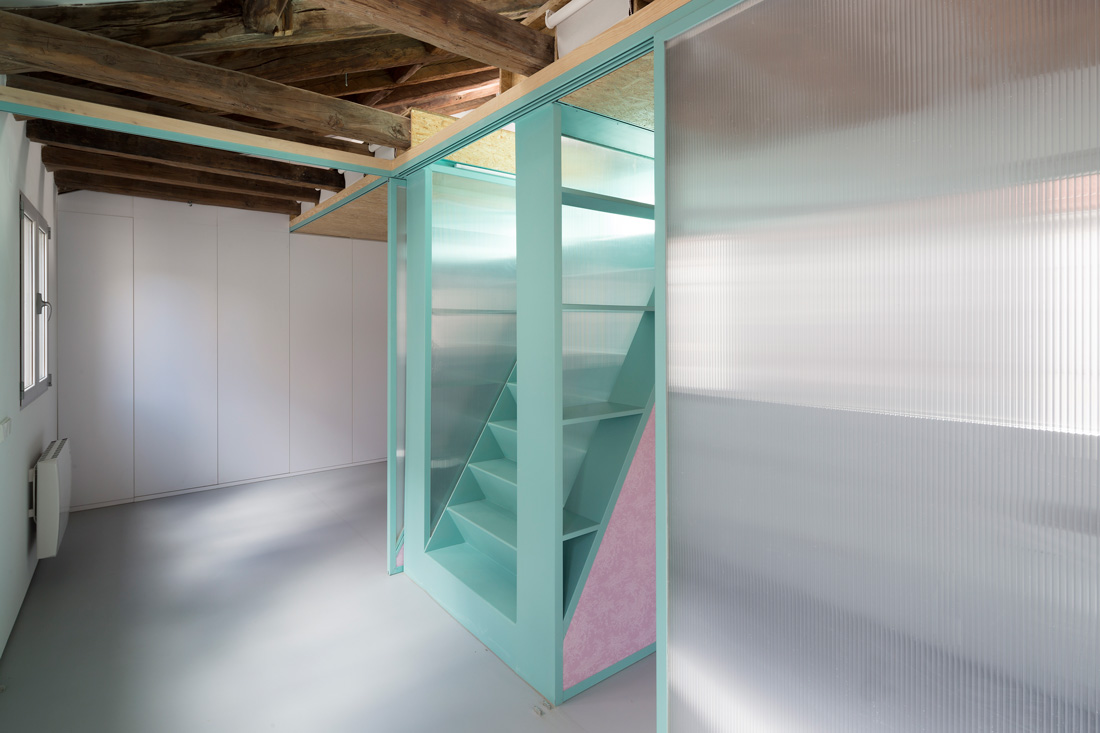 First, there are moving panels that are integrated into the core and run along guide rails. These panels can be used to create different arrangements, such as adding an extra room for a guest, separating the kitchen from the living room area, or opening the whole floor for a party. The panels have transparent sections so that the natural light coming through the mansard roof can reach this space. 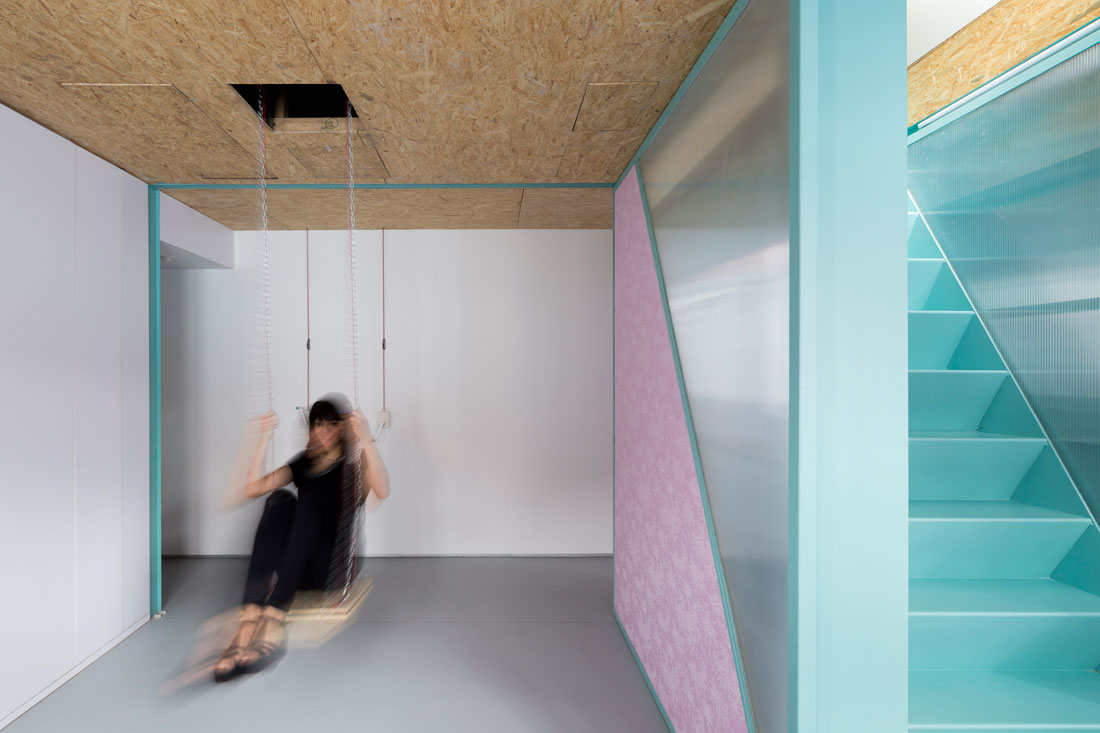 Second, there are secret trap doors that are integrated into the ceiling of the access floor and into the floor of the mezzanine, which house the rest of the domestic functions. The ceiling doors are opened with handles fitted onto the walls. These handles operate pulleys that lower part of the furniture (such as tables and picnic benches, a swing or a hammock) as well as some complementary functions and objects (the disco ball, the fans to chill out in the hammock, or an extra shelf for the guest room). In addition, the floor of the space under the roof has a series of invisible doors that can be opened to alter the functionality of the raised space where the bedroom area is located (these spaces house the dressing table, the tea room, and the storage spaces for the bathroom). 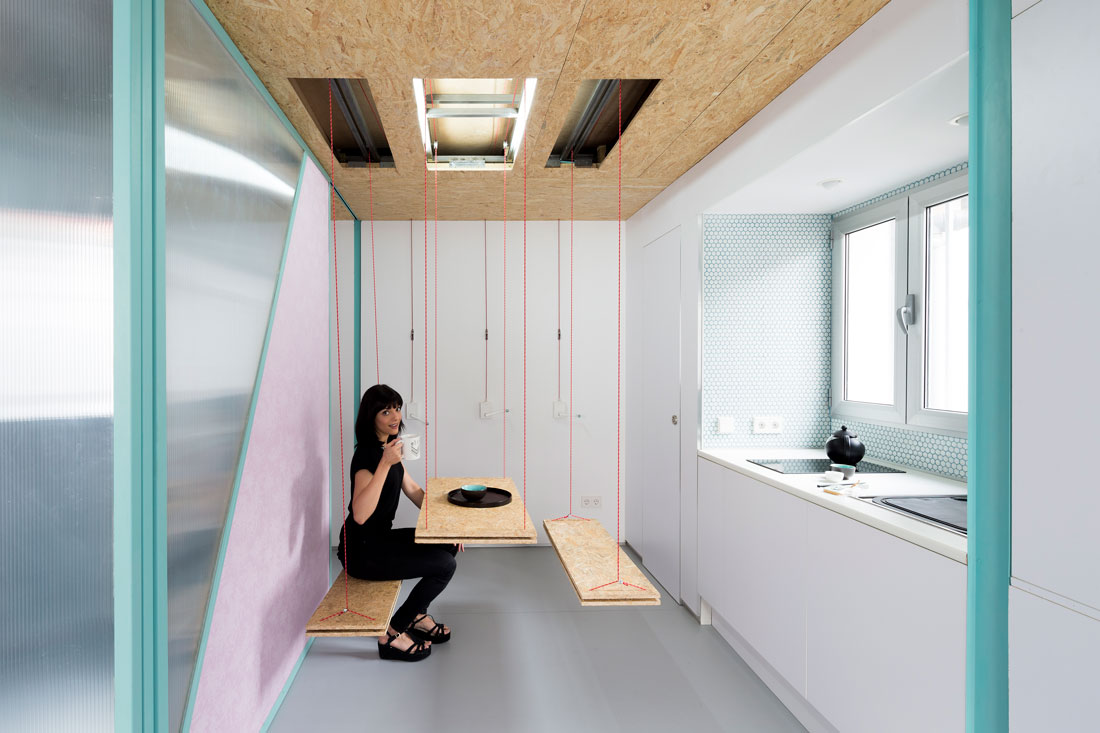 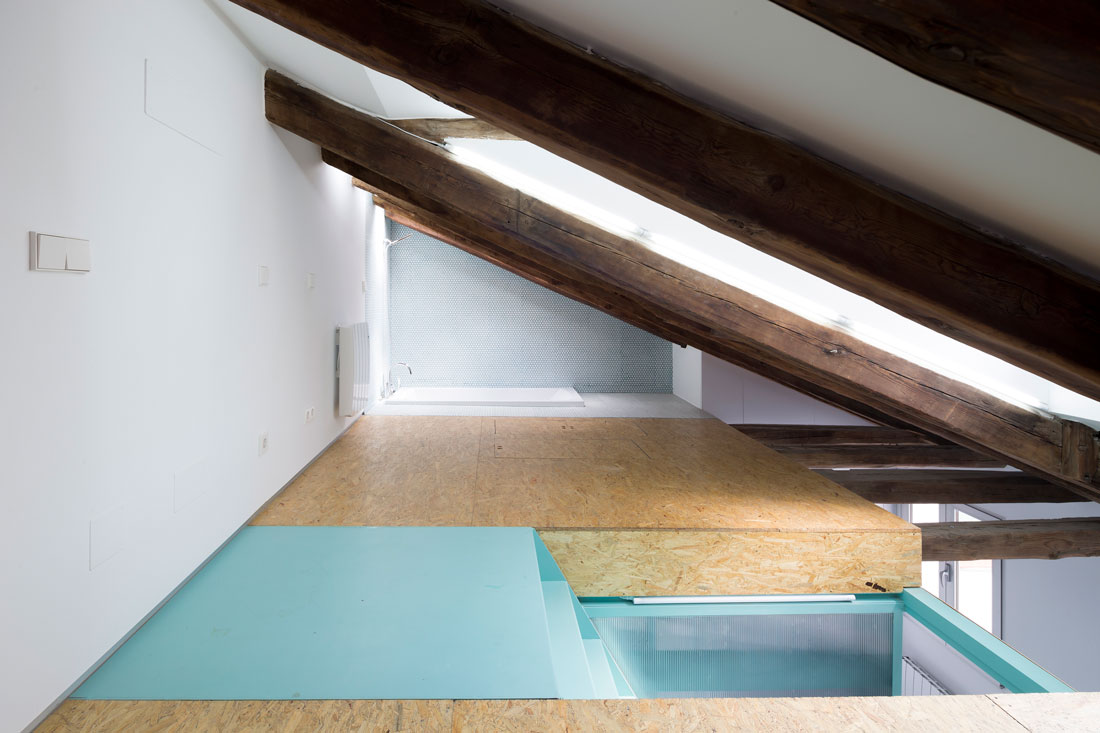 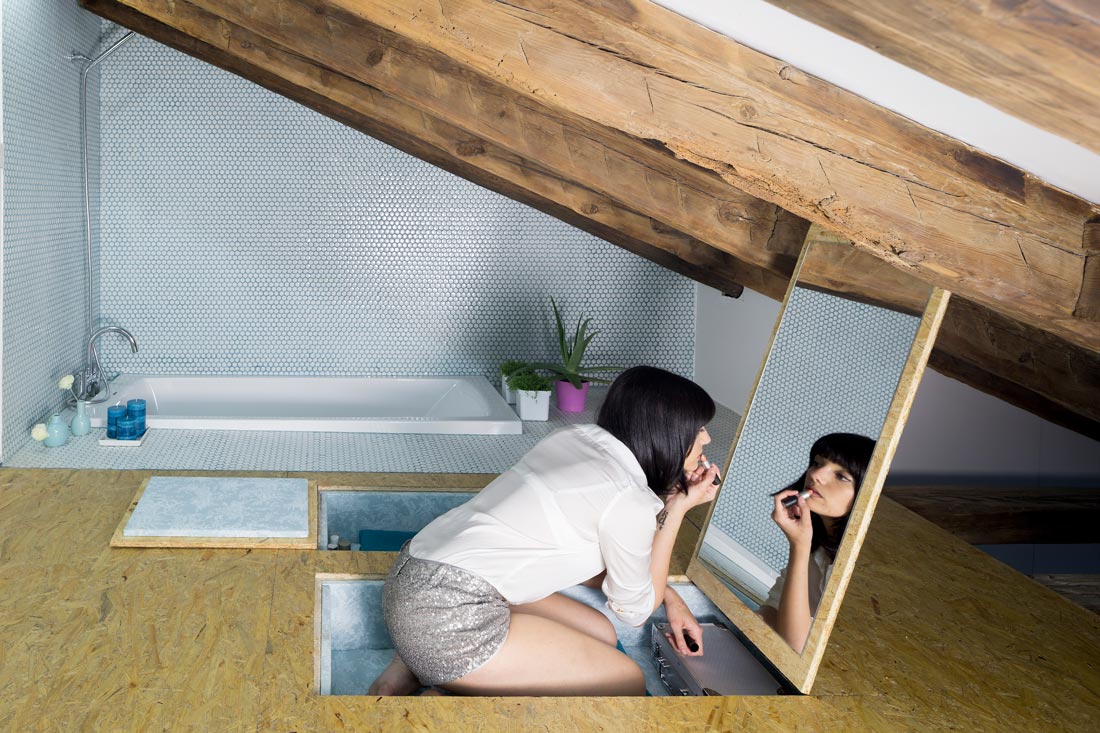 All these elements are integrated within the floor and the ceiling, and they appear and disappear at the user’s whim. The secret trap doors and the sliding panels complement the basic configuration, fit the needs of the moment, and provide different home layout combinations. 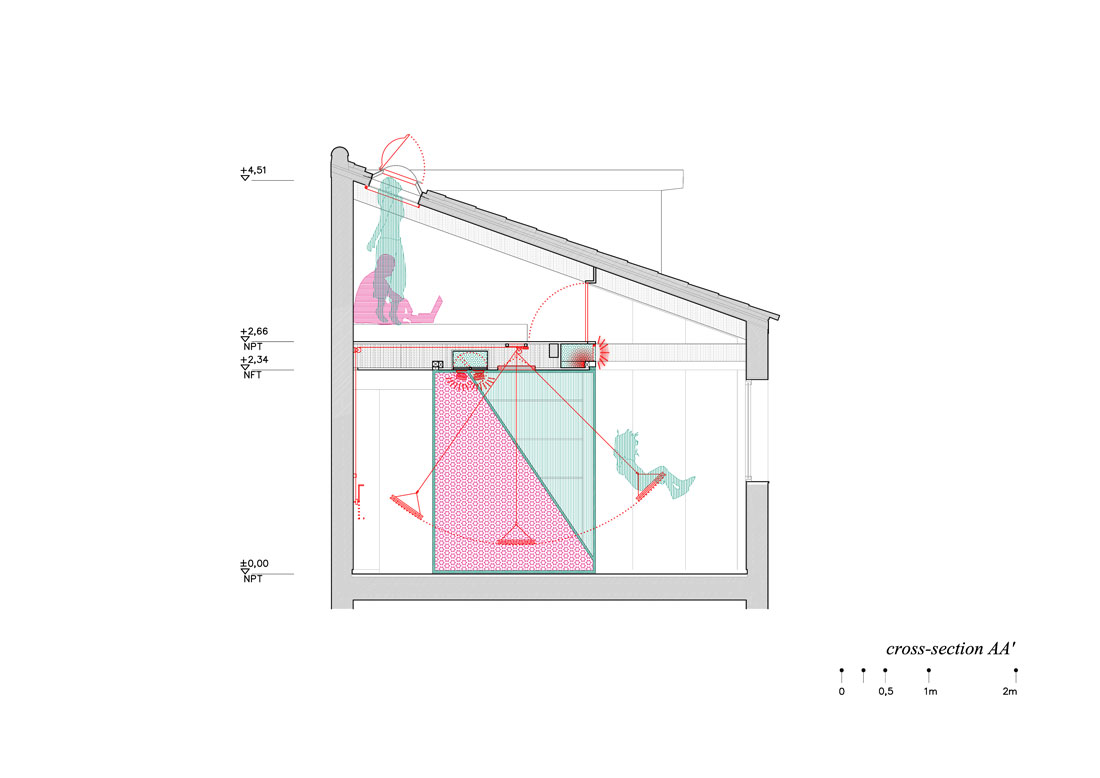 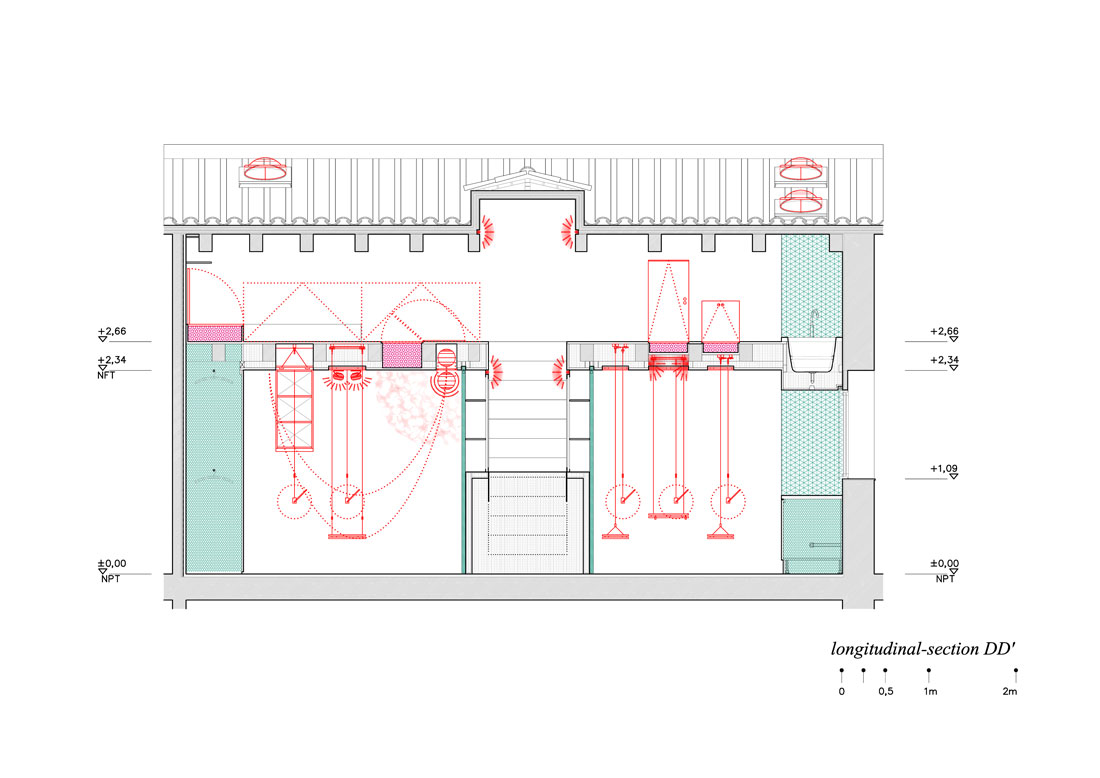 Didomestic is a space that has been conceived to turn over a new leaf. It is a flexible space where everyday life can be rehearsed.

The stage area in a theater (also known as the ‘black box’) is the architectural space where anything can happen. Didomestic is the stage within a domestic theater; it is a black box. Your house can be a dance floor one day and a tearoom the next.

In this domestic theater, life itself is the script. The architecture is the space where everyday scenes are played out.

Every day is a rehearsal.

We are living in times of profound changes. The black boxes of cities are being opened, and households are one of the essential stages for these transformations. We are constantly witnessing how the things that used to be invisible are invisible no more. However, in parallel to the visibilization (de-blackboxing) process, we seek architecture that not only reveals these changes but can also be used to rehearse them, test them, experiment with them and create prototypes for them. Let’s blackbox (in the theatrical sense, that is, let’s stage) our spaces, habits and relationships.

Every house is a theatre.