The Diamond Domes are part of the Bürgenstock Resort Lake Lucerne, located on a forested ridge 500 meters above Lake Lucerne in the heart of Switzerland. With an architectural history tracing back to 1873, the legendary Bürgenstock Resort welcomed its first tennis courts in the 20th century, where Hollywood celebrities like Audrey Hepburn took their first tennis lessons. As part of the major revamp of the Bürgenstock Resort, which reopened in 2017, the historic tennis courts were reinvented to become a multipurpose covered space, including an ice rink. In addition, the tennis halls were updated to cater to Davis Cup standards, as well as to allow for hosting events such as exhibitions and banquets. For this reason, the halls needed to be column-free, include lighting in line as well as ancillary services like lounge, kitchen, storerooms, and parking facilities. 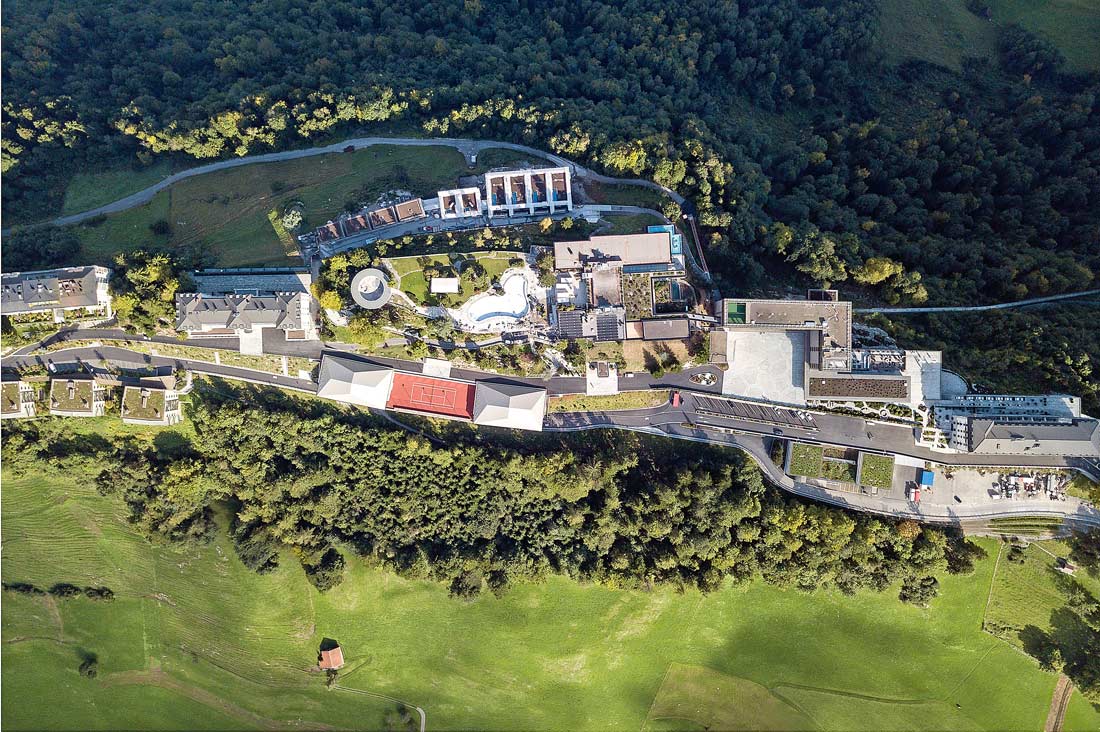 The building sections are arranged symmetrically around a central outdoor tennis court. Two identical tennis halls with crystal-shaped roofs border the transverse sides of the court. A clubhouse with bar, cloakroom and reception area marks the central end of the mountain-facing side of the building. The visible façades of the building are clad in natural stone. This Dolomite Muschelkalk is reminiscent of the rock that is already present on the Bürgenberg and fits in well with the rest of the buildings and their stone cladding. The roof panels are made from aluminum composite panels, their colors matching those of the stone. The panels round off the exclusive appearance of the overall complex. 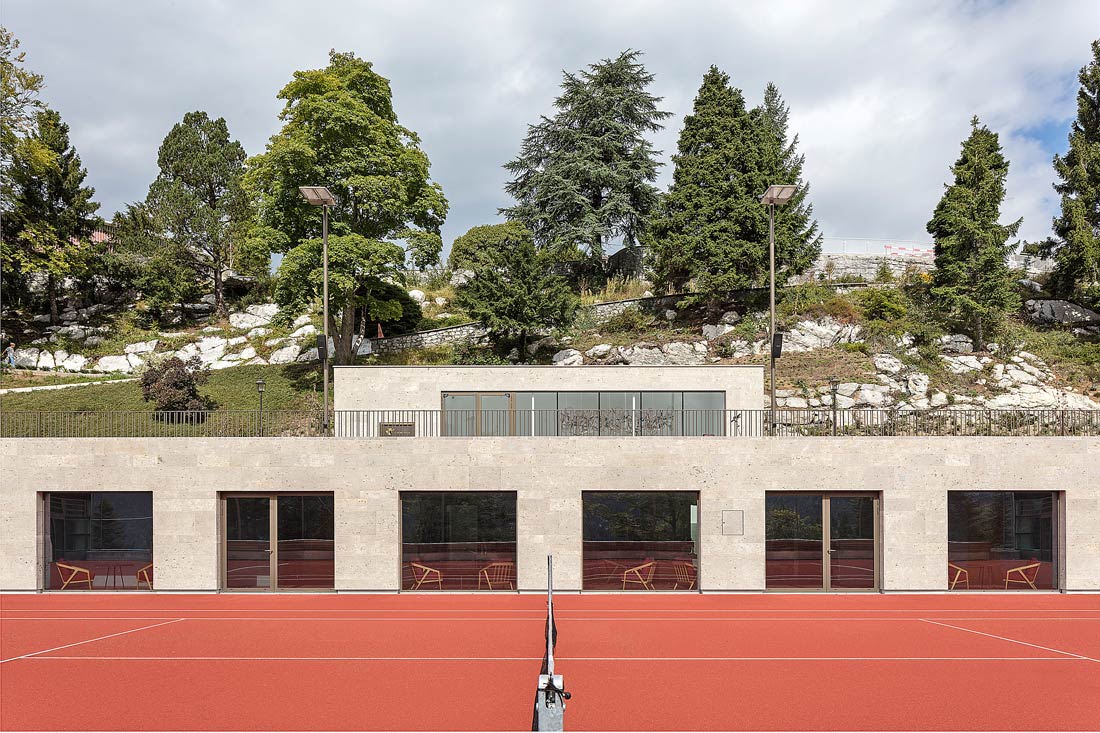 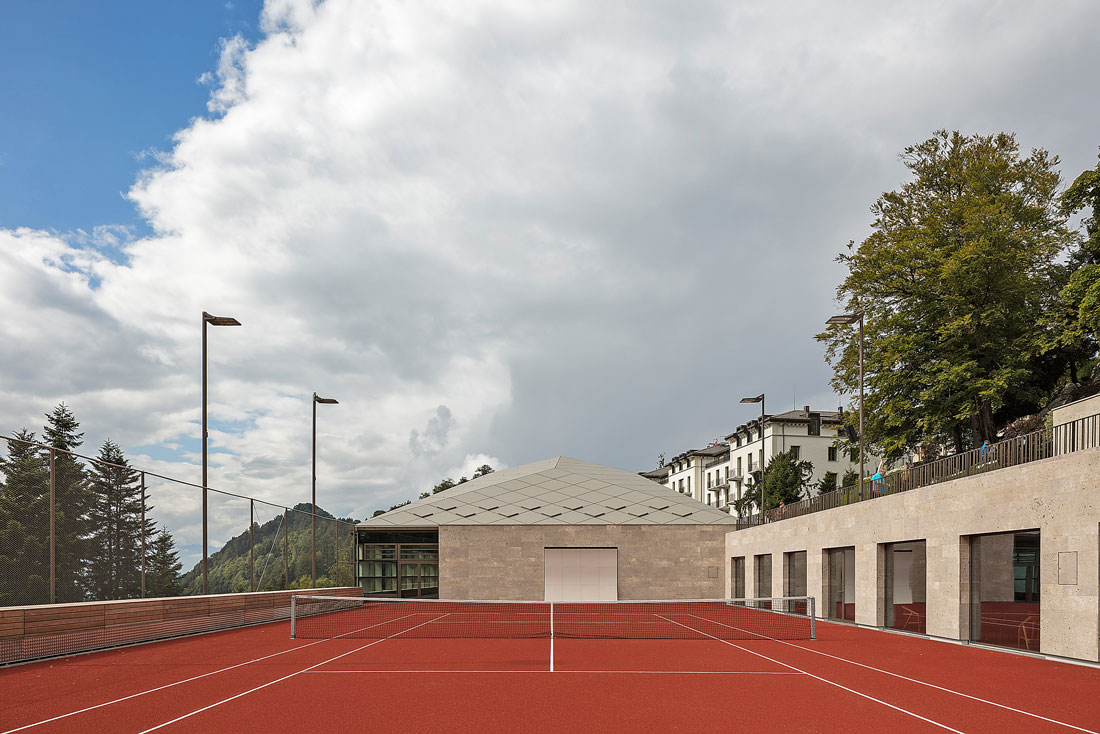 The tennis halls can also be used as event halls. In winter, the outdoor tennis court can be converted into a curling facility with four rinks or it can be used as an ice rink, thus supporting the multifunctional use of the complex. The filigree wooden supporting structure reveals its full glory in the building’s interior. The freestanding roof construction stretches over a rectangular area some 22 meters wide by 37 meters long. The halls owe their name, “Diamond Domes”, to the roof construction whose diamond pattern across a range of different roof pitches is intended to conjure up images of a rock crystal. Another detail that had to be taken into account in the planning stages was roof deformation. 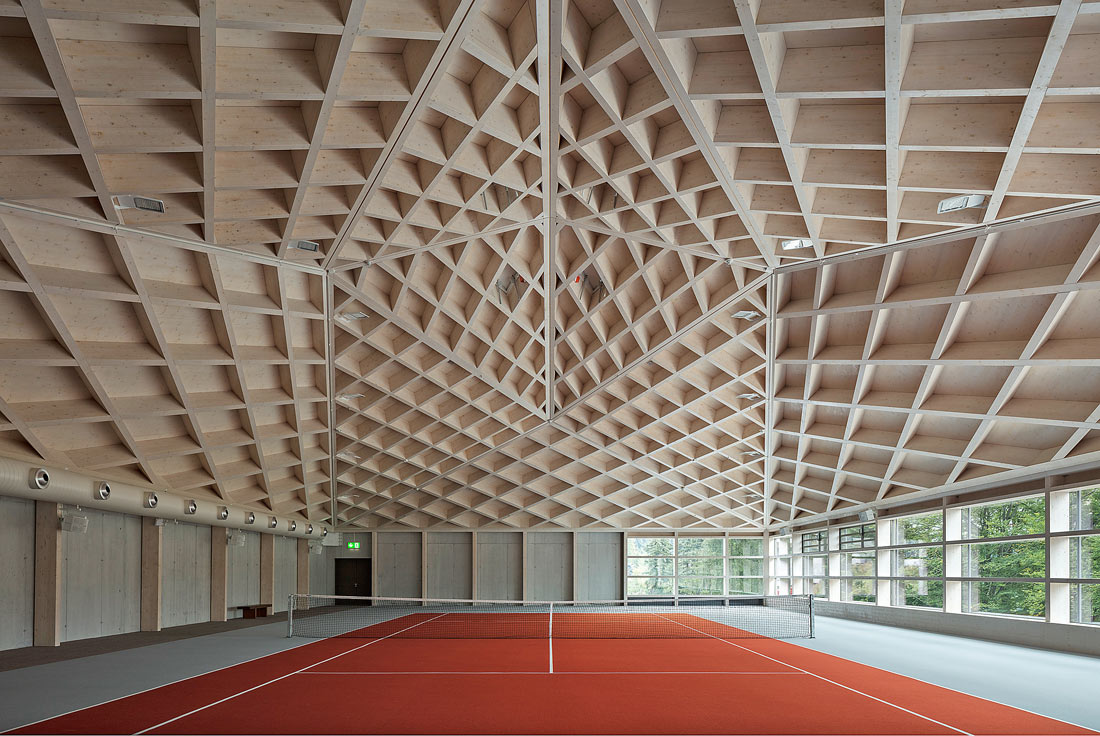 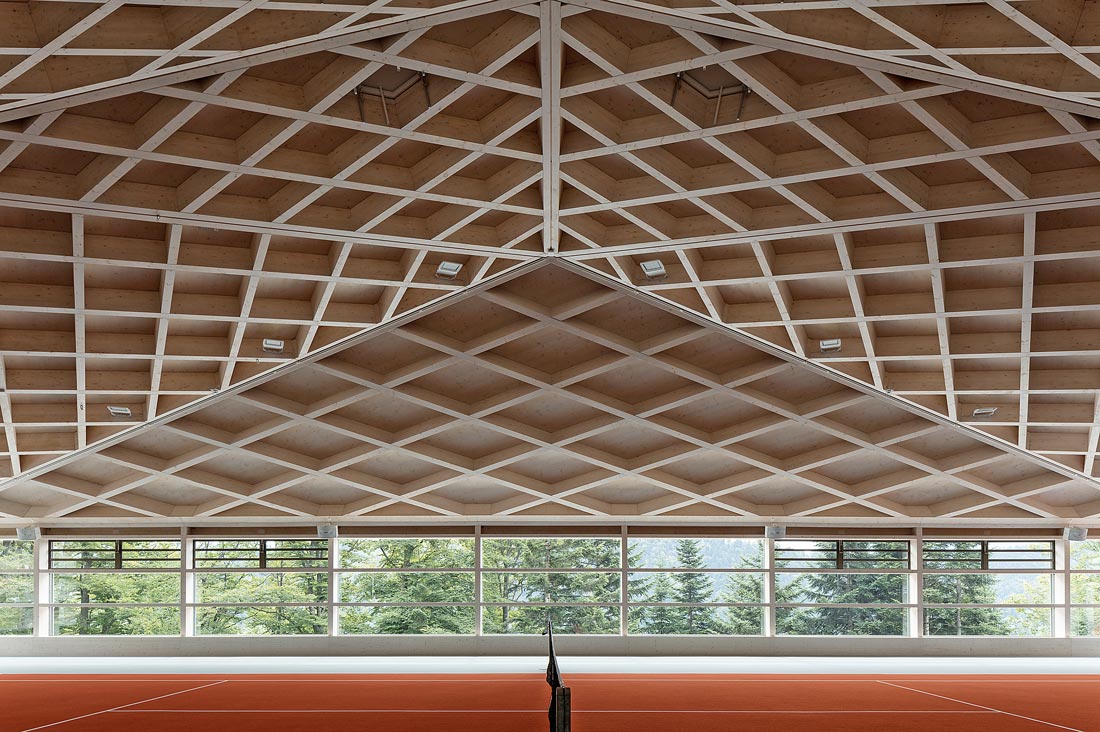 The vision behind the Diamond Domes is a flexible and multi-use space, which allows maximizing the use of the facilities according to different business segments and seasonality. The main purpose is the tennis offer, adding a major asset to the activity offer of the resort. With its David Cup standards, the courts can also host major tennis events. Seasonality playing an important role in this location, the outdoor tennis courts are turned into an ice rink in winter. Ice-skating, and eventually curling, upgrade the outdoor offer in winter. In addition to tennis, the Diamond Domes accommodate all types of events, from cocktail receptions to large exhibitions. 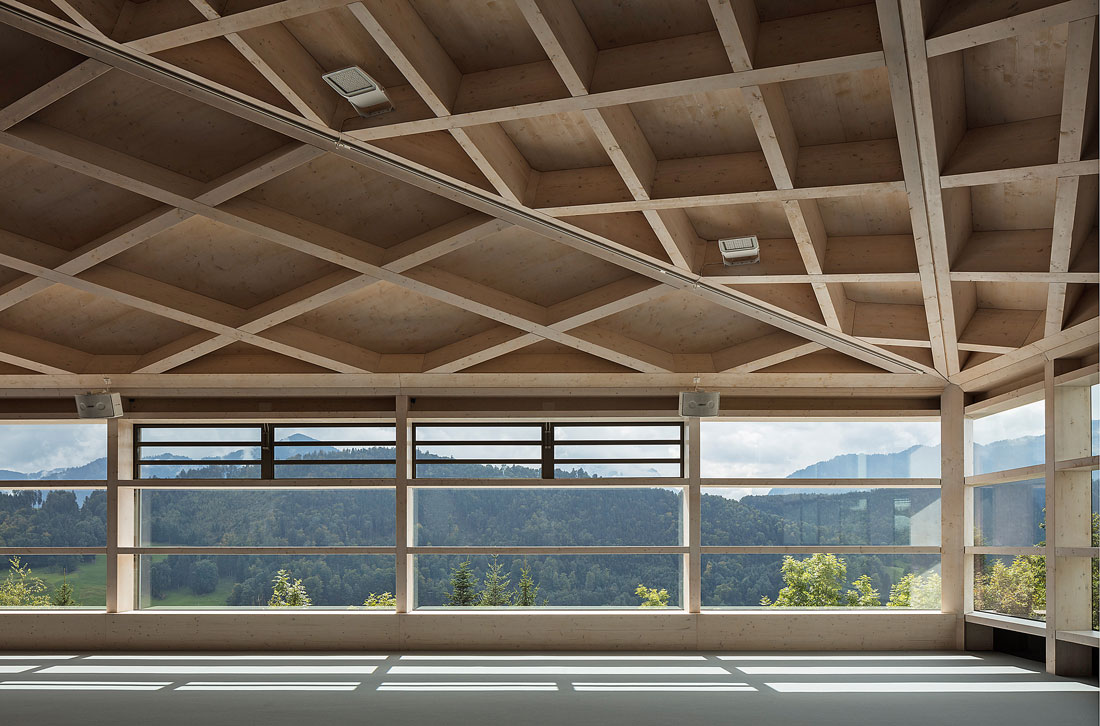 The Diamond Domes are cooled and heated thanks to a revolutionary energy system operating with water from Lake Lucerne. Water from 38 meters deep in the lake is pumped up to the resort, where it used at 9° for cooling or heating. The same water is used for the ice rink, the resort’s swimming pools, and the gardening needs. Unused water goes back into the lake, also driving a turbine for a generator that produces electricity to operate the resort. In order to shorten distances of transportation and to use local resources, the wood for the special roof structure came from the surrounding forests and the firm hired to cut and install the wood is a local specialist. 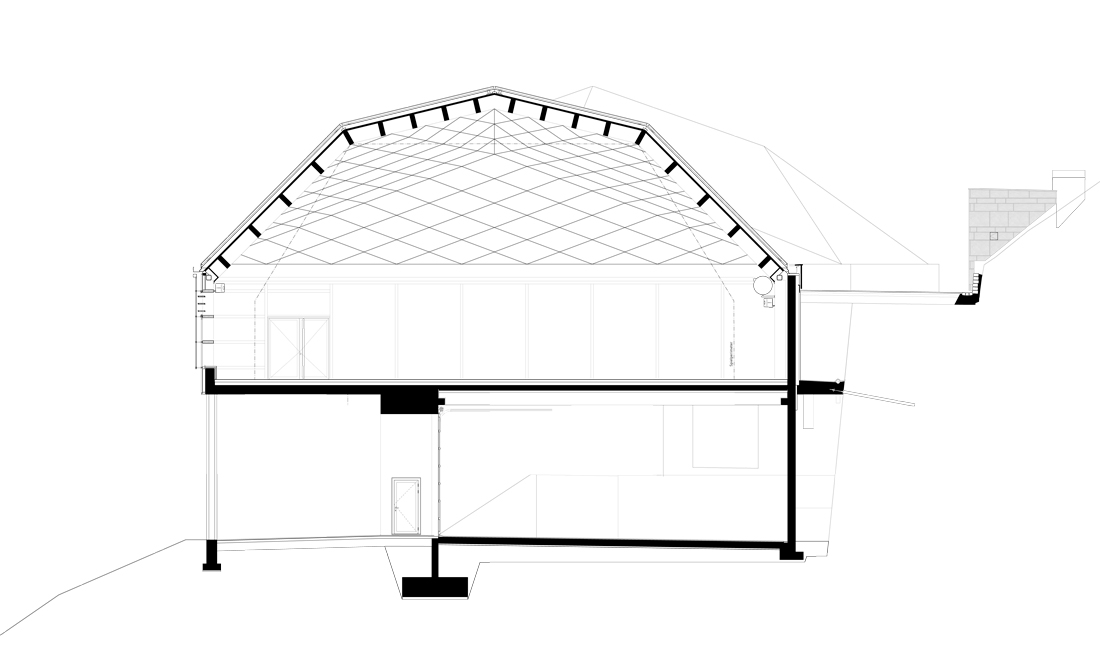