MVRDV completes the opening of Tainan Spring, a public space design that includes the transformation of a former city-centre shopping mall into an urban lagoon surrounded by young plants that will develop into a lush jungle, reconnecting the city with nature and its waterfront. Commissioned by the Urban Development Bureau of the Tainan City Government, the completed masterplan rejuvenates a ‘T-Axis’ to the east of the Tainan Canal, creating a new landscape strategy to unify the site of the former China Town Mall and a kilometre-long stretch of the city’s Haian Road. In addition to the new public square and urban pool, the plan includes improved public pathways, a reduction in traffic, and the addition of local plants. 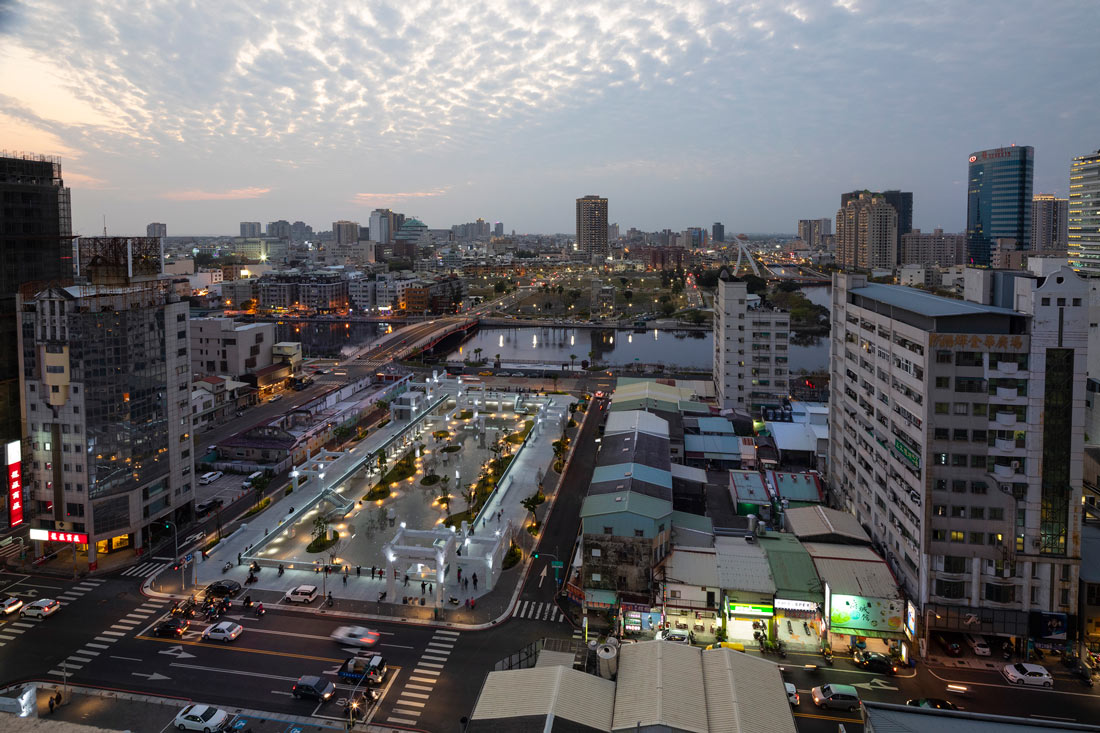 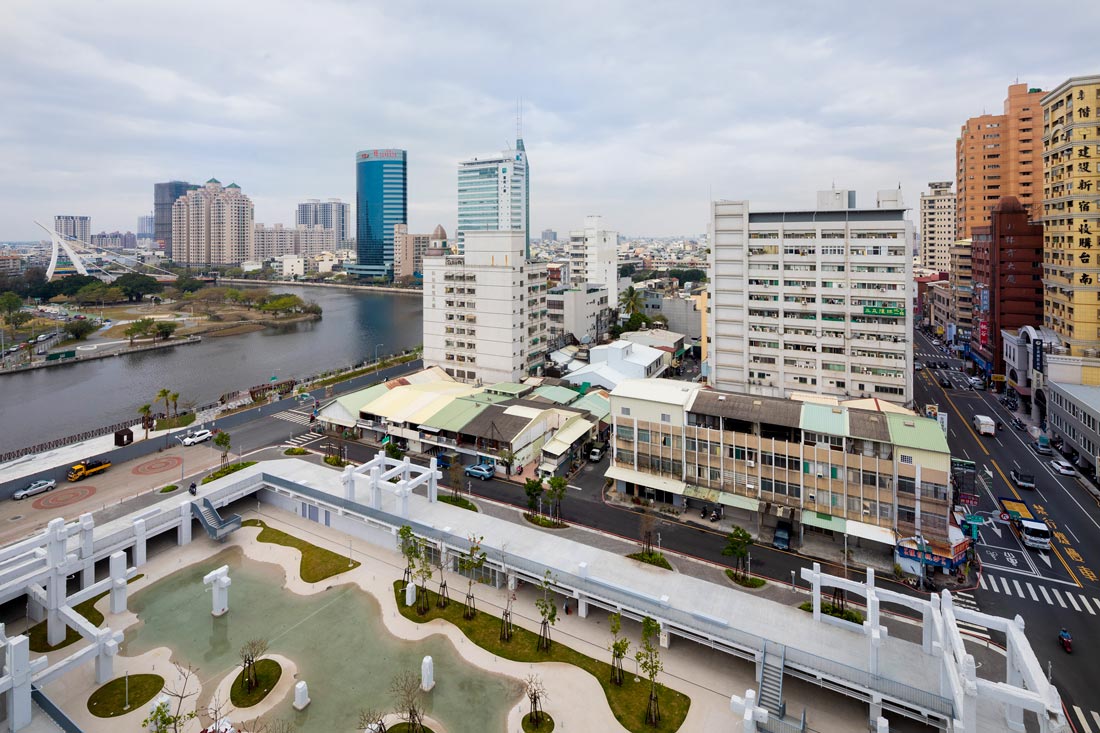 Tainan’s water network served as the basis for the city’s marine and fishing industry since the 17th century, but the 1980s saw the city depart from this historic urban approach. China-Town Mall was built on top of the old harbour next to the Tainan Canal in 1983. A large commercial structure that no longer serves its intended purpose, it has become a drain on the vitality of downtown Tainan. Tainan Spring shows what solutions are possible for unused shopping malls now that online shopping is supplanting physical stores. 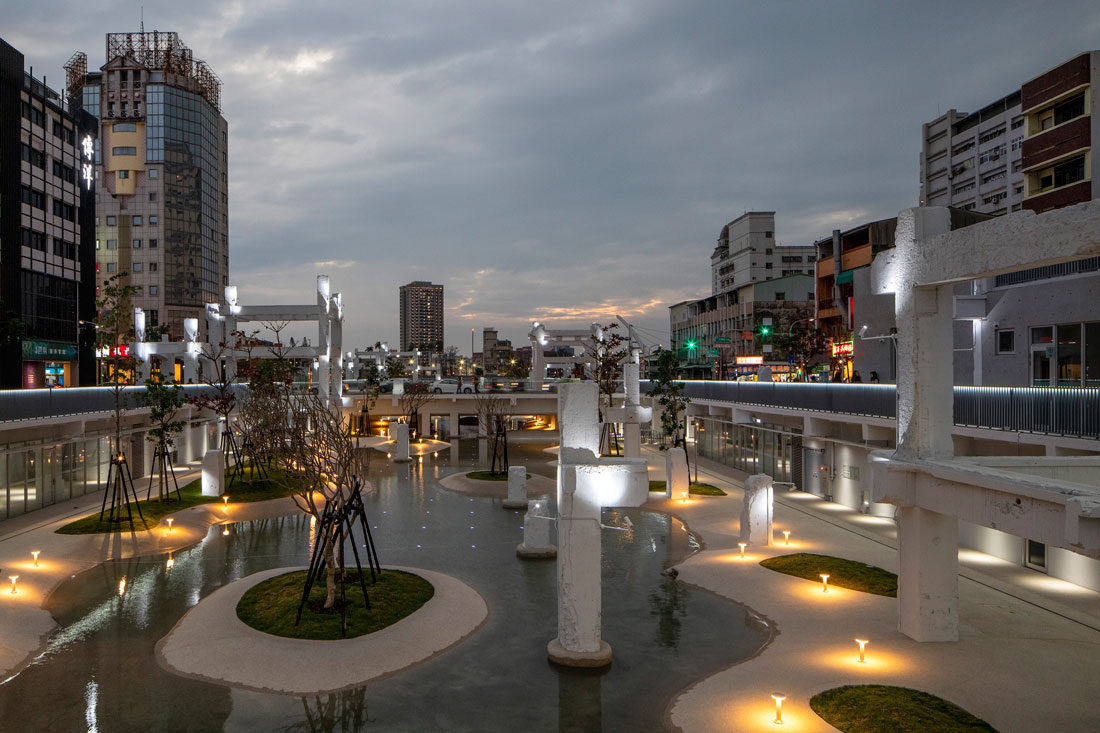 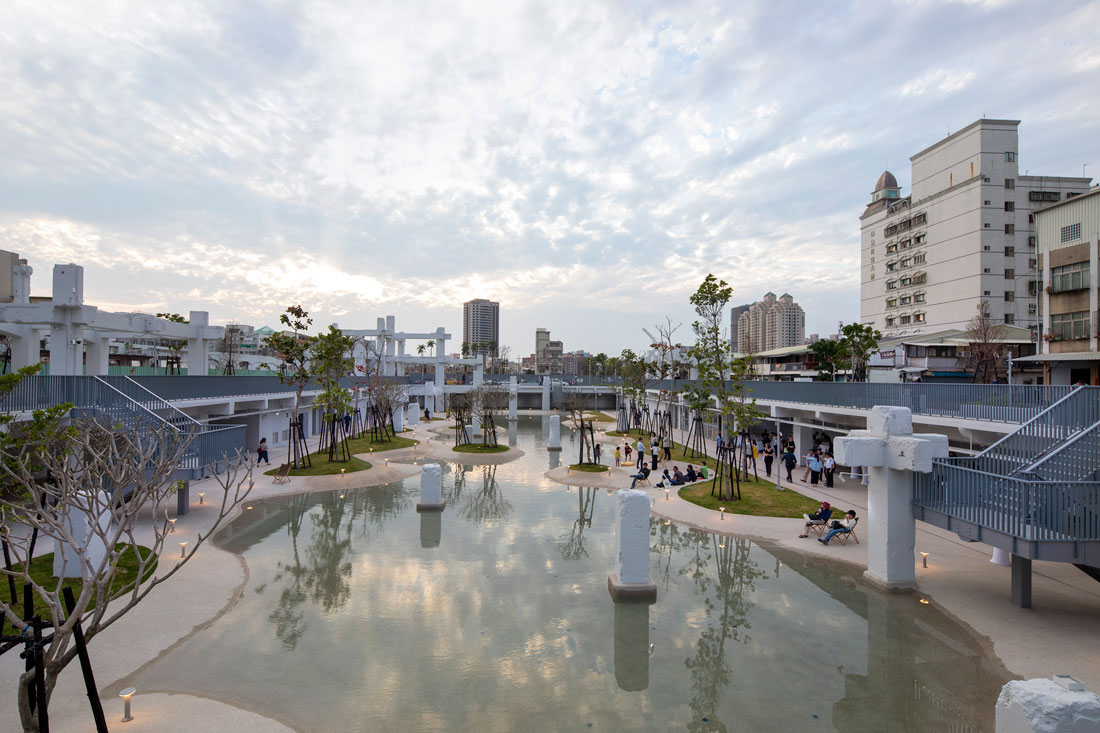 The China-Town mall has been removed and meticulously recycled, making the project an innovative example of the circular economy. The mall’s underground parking level has been transformed into a sunken public plaza dominated by an urban pool and verdant local plants, surrounded by a shaded arcade. The pool has been carefully planned to be a perfect gathering spot for all seasons: the water level will rise and fall in response to the rainy and dry seasons, and in hot weather mist sprayers will reduce the local temperature to provide welcome relief to visitors, reducing the use of air conditioning in the summer months. This space hosts playgrounds, gathering spaces, and a stage for performances, while the artful deconstruction of the building’s concrete frame has left a number of follies that can in due course be converted into shops, kiosks, and other amenities. 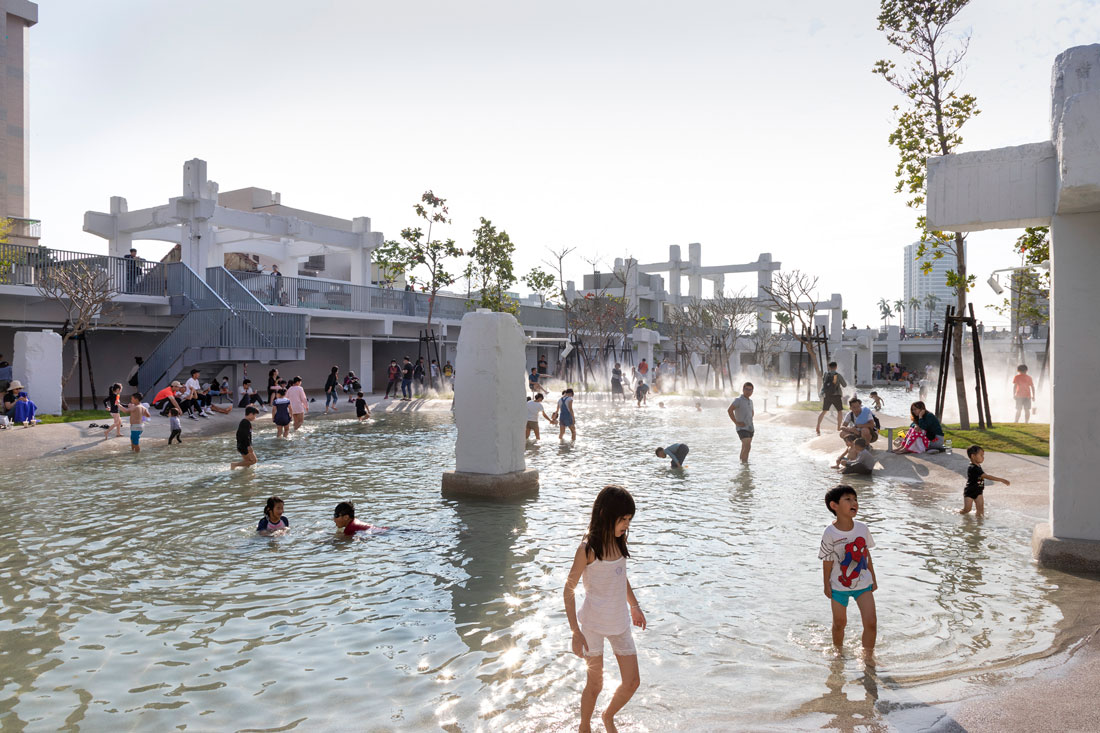 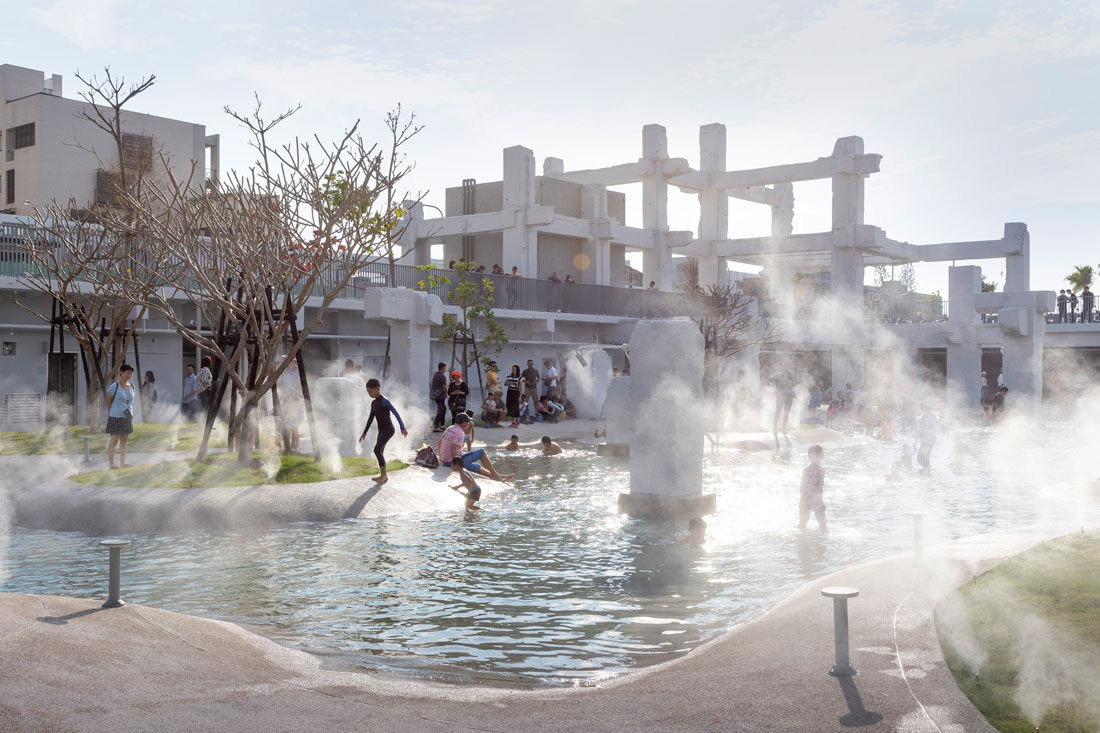 In addition, a portion of the structure of the second basement level below has been exposed with a glass floor, allowing people to further understand the history of the site and appreciate the former mall as an important part of Tainan’s history. This new way of preserving heritage meant that the site was not cleared and renewed in a tabula rasa approach; instead, the foundations of the former mall stick out of the park and the lagoon like a contemporary Roman forum, offering a visual marker of the historical decision to close a port in favour of a mall. 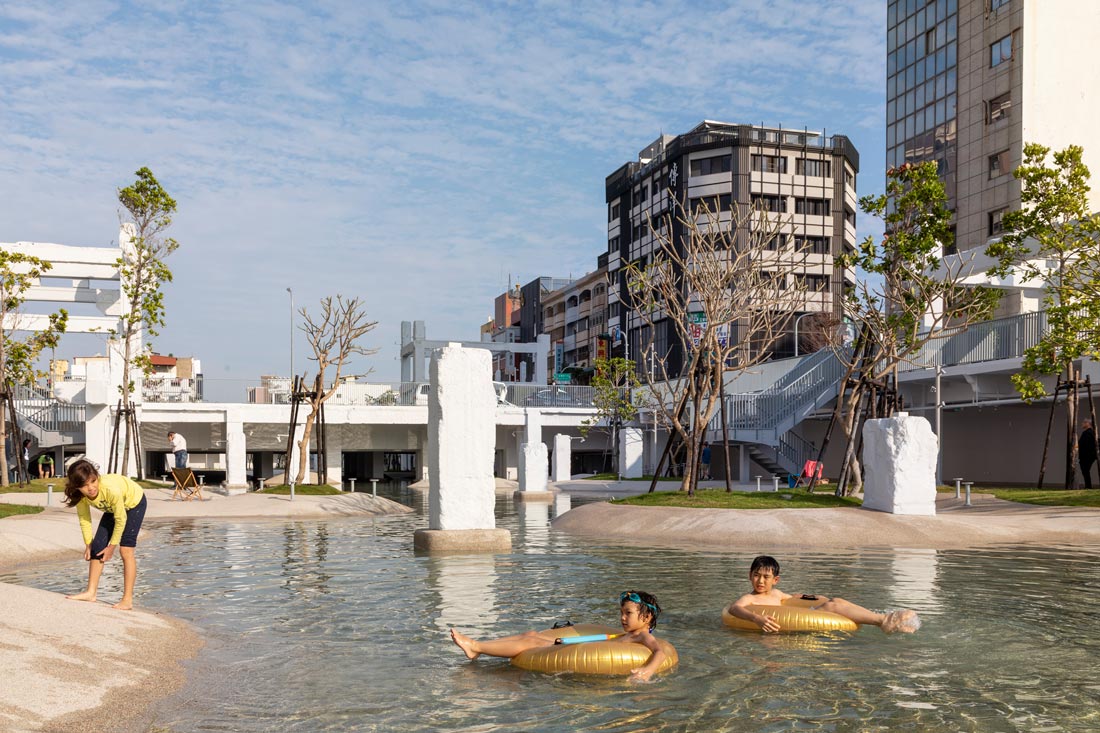 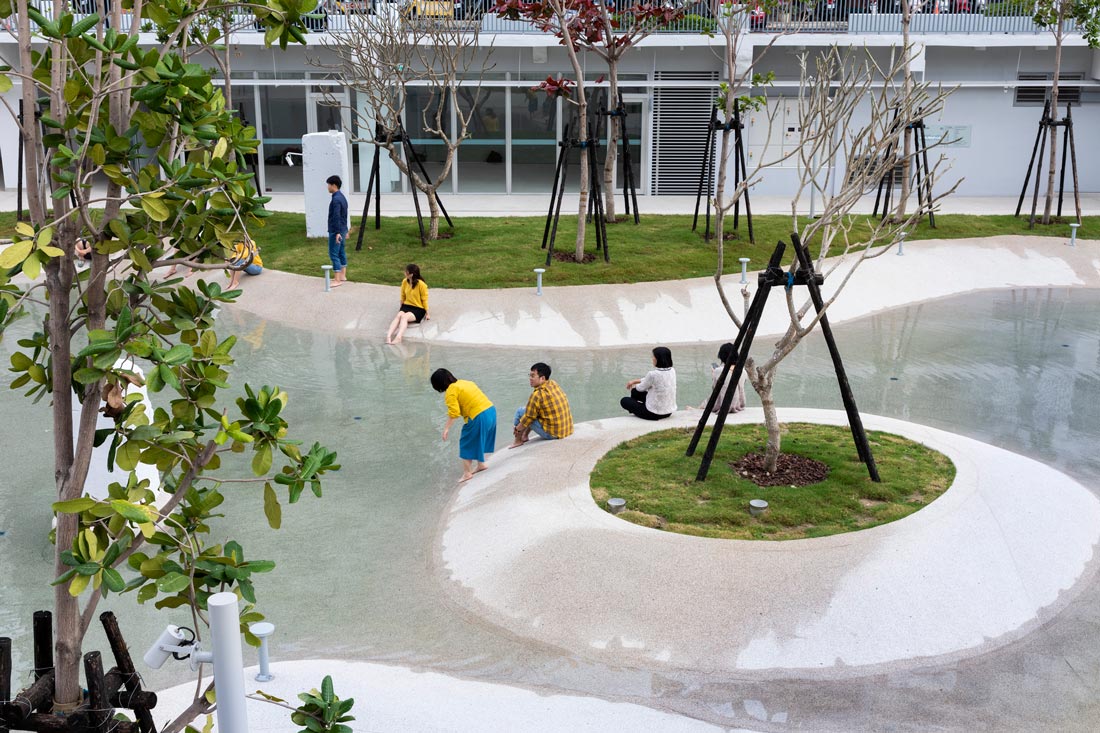 A key part of MVRDV’s strategy for Tainan Spring was to bring greenery into the city. As a result, both the public square and Haian Road see the introduction of large areas of planting, which makes use of local plant species combined in a way that emulates the natural verdant landscape located to the east of Tainan, with trees, shrubs, and grasses providing multiple layers of vegetation. The density of these plant beds varies in response to the shop frontages, providing more space for people where needed and for plants in between. Now that construction is complete, the design will take another two to three years to be fully realised as the freshly planted beds gradually grow into the lush garden that was envisioned. 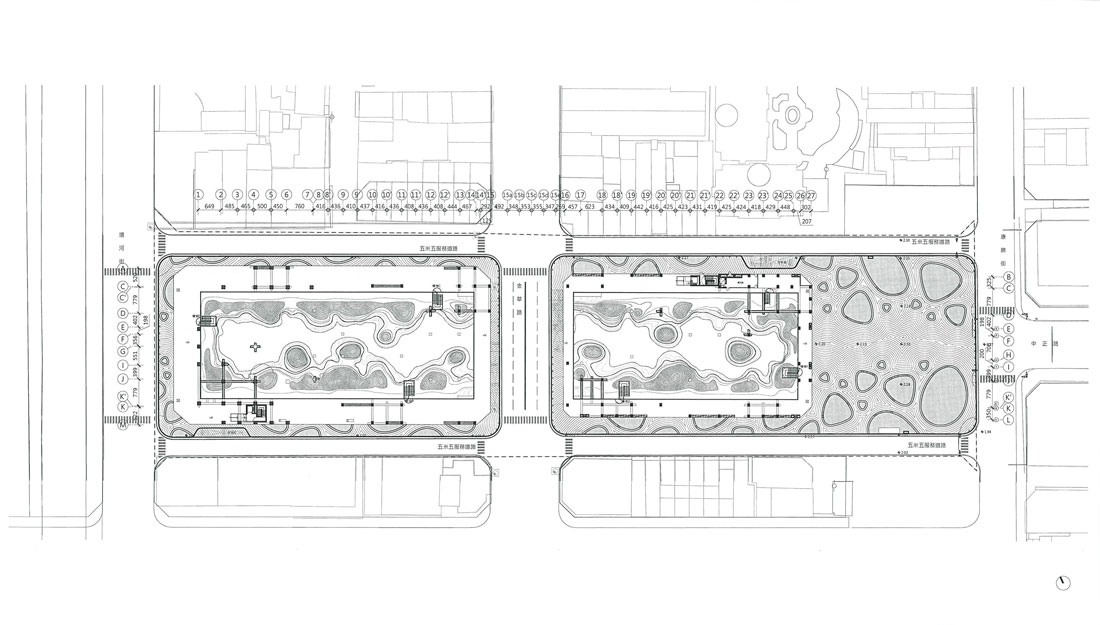