The Riverfront Park Waller Sand in Bremen demonstrates how the complex technical requirements of a land-protection dike can be combined with high standards for architectural and cultural sensitivity to create ecologically valuable and diverse urban green spaces.

Waller Sand is a forward-looking project that shows how flood protection infrastructure can meet all technical requirements while fostering the generation of urban development elements for multifunctional utilization. These elements value the specific historical context they inhabit while adhering to the particularities of today’s public sphere. 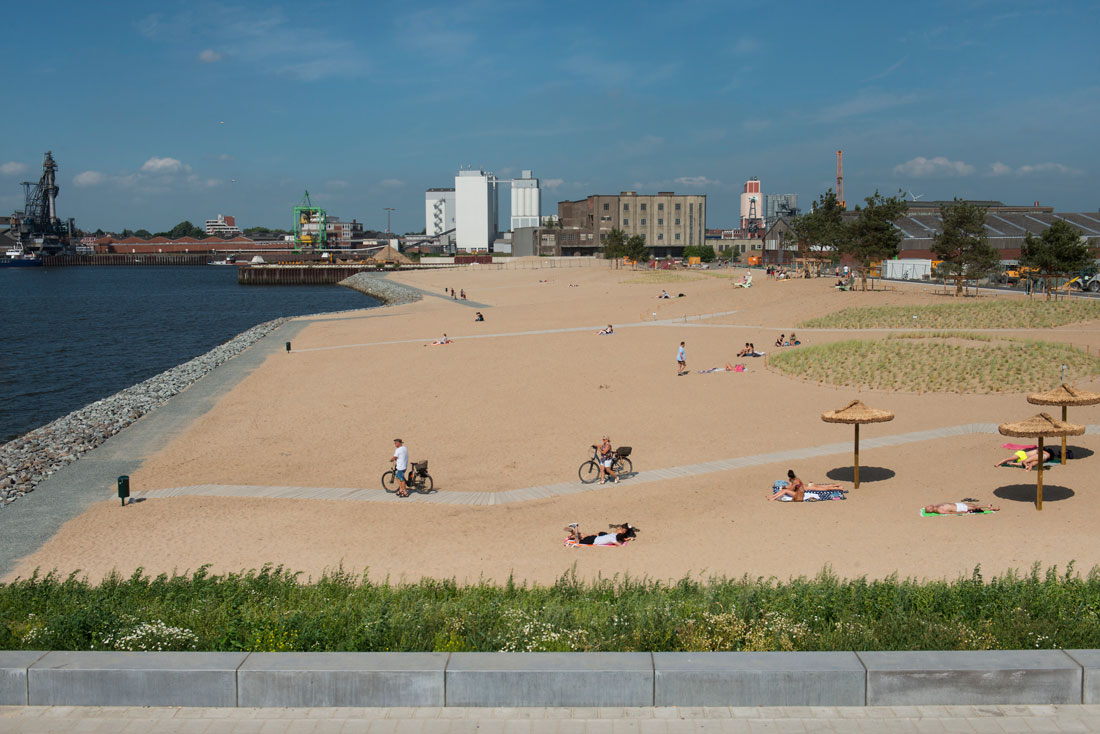 Bremen, Überseestadt and the Weser River

Along with the flood protection efforts in Bremen’s port area, one of Europe’s largest current inner-city development projects is emerging: Überseestadt (City Beyond the Seas). A new, mixed neighbourhood for 5,000 residents – with cultural and educational facilities contributing to 17,000 new jobs – is taking shape on 300 hectares. Überseestadt is situated on a strip of land in the port area of Bremen’s inner city west. The new neighbourhood is emerging in a former harbour area. Waller Sand forms a sort of ‘crown’ at the northwest demarcation point of this up-and-coming area. It lies immediately between the new neighbourhood and the harbour’s turning basin, which is equipped with a massive turning radius to accommodate large commercial ships and is still in use today. 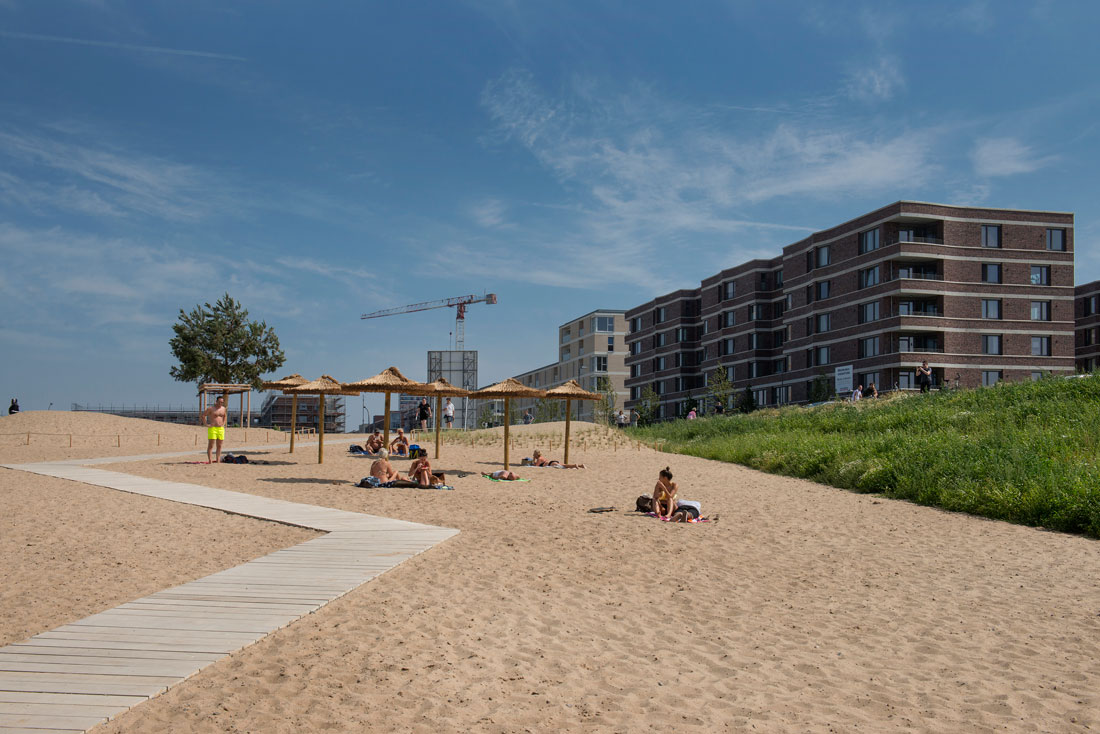 The Weser River is the lifeline of Bremen. The river’s tidal range of more than four metres makes it the highest in the North German bight, while the effects of climate change are expected to heighten it further. The coastal protection master plan foresees a necessary height increase for the dikes of about one metre. Instead of the purely functional loose stone, this segment of Überseestadt has undergone a ‘soft’ transition, developing into a meeting place that makes the water come alive while being framed by the surrounding silhouette of industrial history. Land reclamation has allowed the current turning basin to host a new park that connects the city with the water. 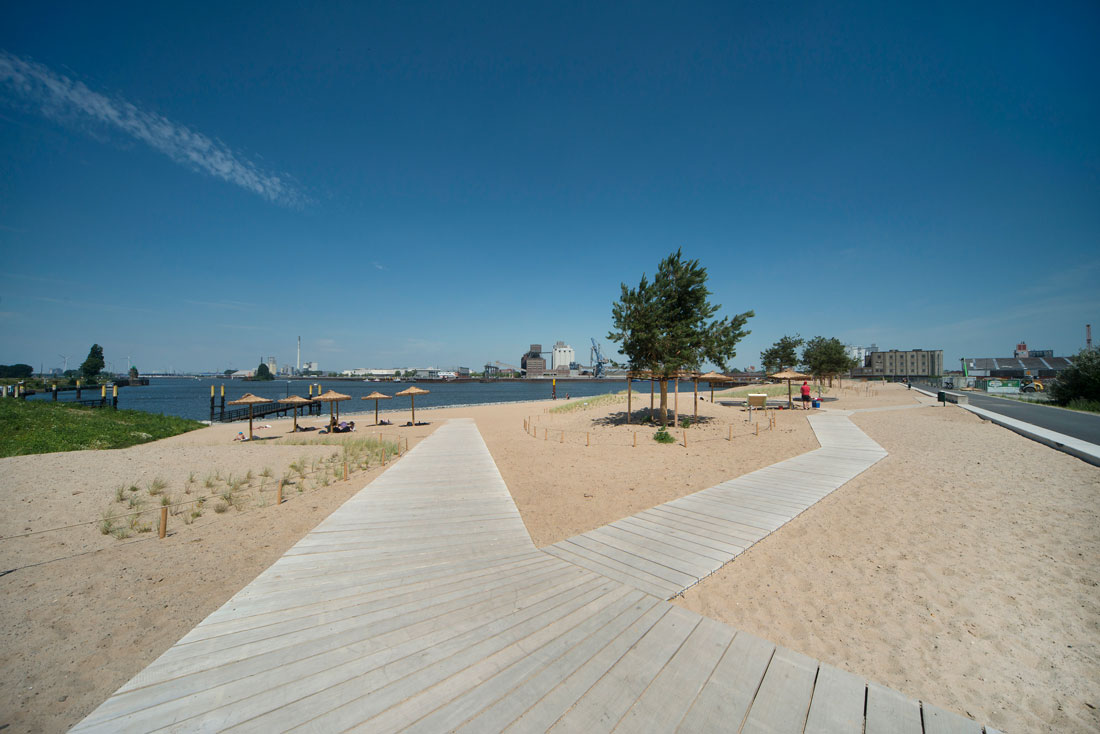 To attain the required height for the dike and protect the city from flooding, a sheet pile wall was constructed in Waller Sand. The upper, visible part of this forms a bench encompassing the entire project area. This bench fulfils several functions. It provides both a structural component of flood protection as well as a significant design element in the new open space. As an urban edge, it forms an important visual element as well as a place to stay. On the city side, the bench, which is accessible from either side, unfolds as the spine of the park adjacent to the boulevard along Gustaf-Erikson-Ufer. The boulevard is conceived as a reduced-traffic area that invites people to stroll along its wide path atop the dike.

In front of the sheet pile wall sprawls a roughly 30,000 sqm expanse of sand that mitigates the wash of waves, a significant factor during flooding. A beach park comprising pine trees and marram grass succeeds in containing the sand. The extensive park, which runs between the edge of the city and the water, forms an atmospheric contrast to the industrial surroundings. Connected to the inner city of Bremen by a ferry as part of the public transport network, the nearly three hectares of open-use space function as a citywide magnet for numerous recreational activities as well as a connection point for adjacent neighbourhoods. Along the water, the sand area is lined with a barrier-free riverside path, which allows those with limited mobility to share in experiencing the Weser River and the expanse of the turning basin. 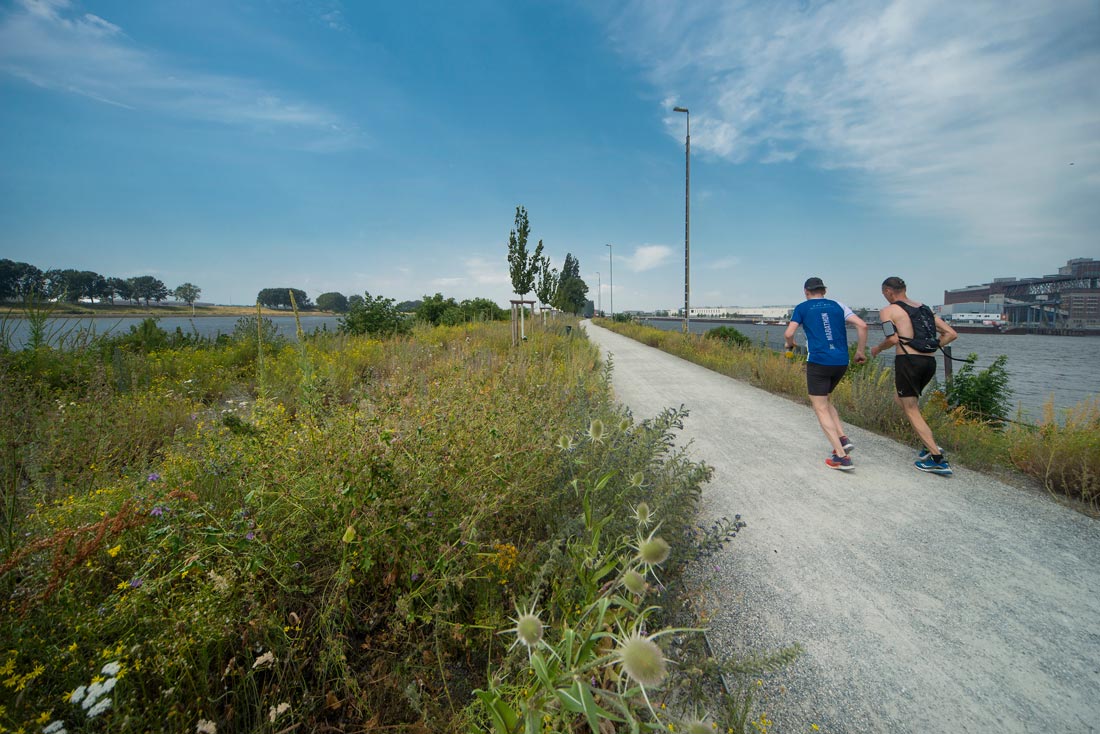 The end of the jetty is already a popular excursion destination. The area around the lighthouse has been cautiously upgraded, and access to it is facilitated by way of a path that can also accommodate those with limited mobility. The path is flanked by a row of trees that cites and furthers the vegetational theme of the promenade. The south pier offers visitors an experience of urban wilderness. The way existing spontaneous vegetation among the railway ballast is complemented with indigenous plants accentuates and further enlivens the natural landscape. 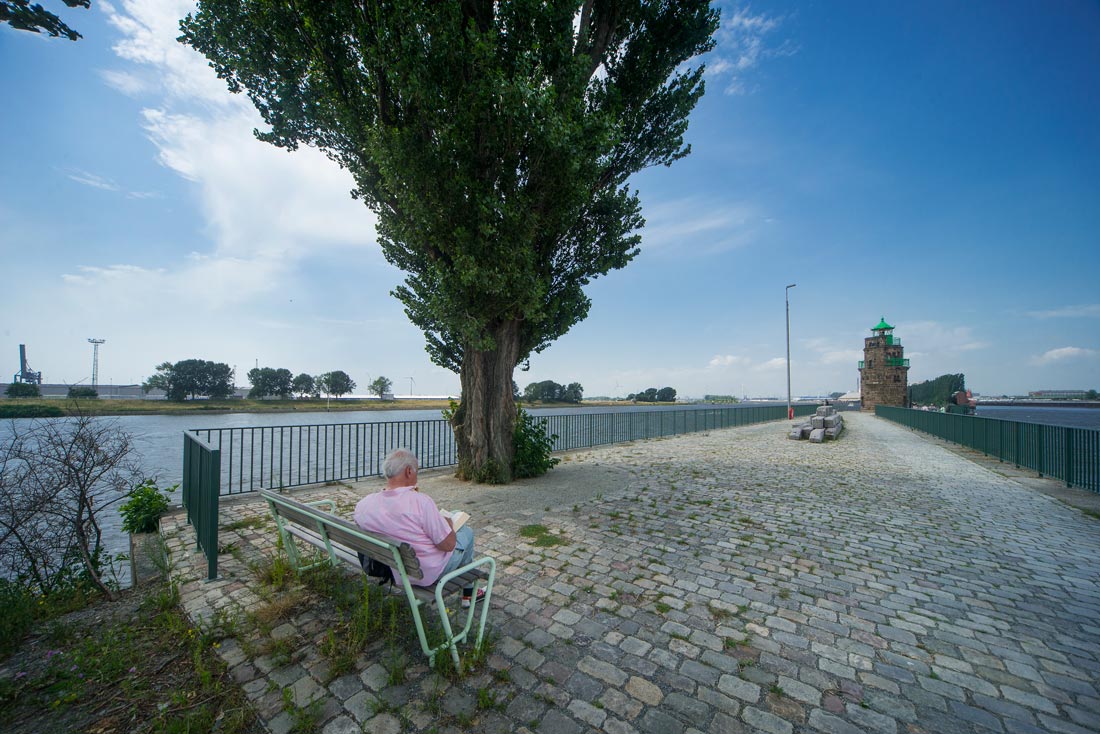 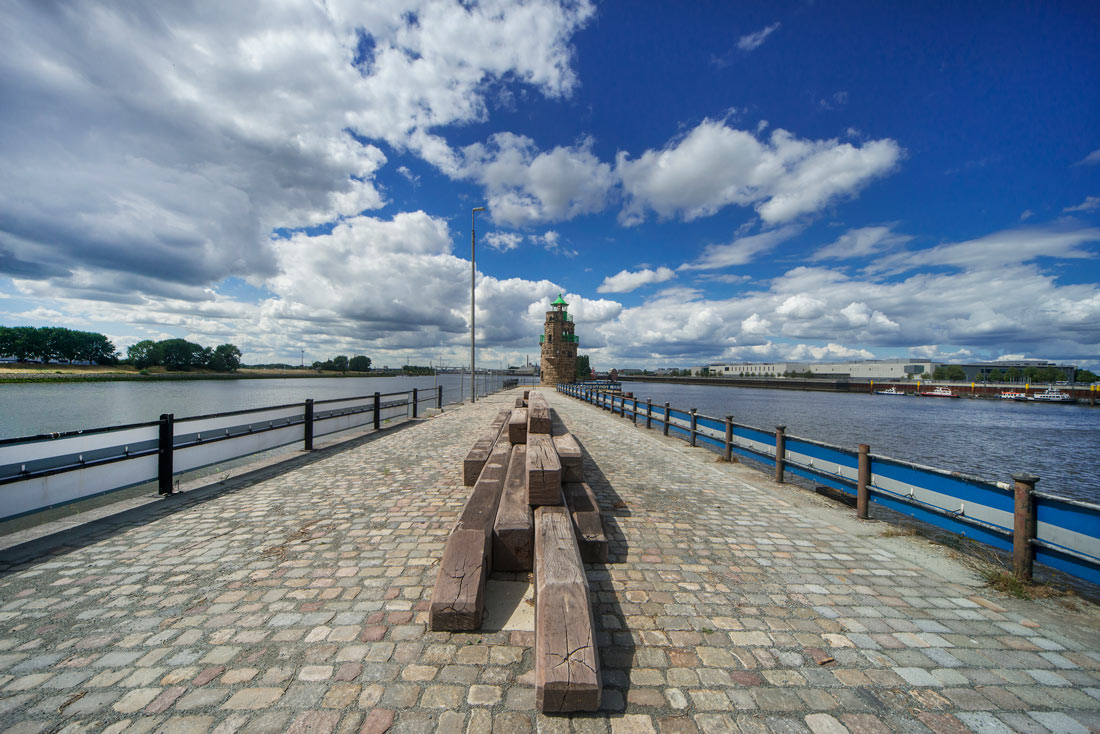 Waller Sand, with its leisure uses in open space, lends the existing landscape a new, contemporary component. Respect for and continuation of the existing endemic proportionality and materiality of the harbour and natural environment enable the new additions – with their clear, straightforward and impressive structural elements, long benches and simple timber-plank paths – to blend optimally in terms of their dimensions and the unique ongoing atmosphere of the locality. The subtle design unfolds the singular openness and expanse of the existing landscape of industry and nature as a new cultural landscape, offering expansive areas for recreational activities and counterbalancing the lack of open spaces in adjacent parts of the city. The park illustrates how complex technical infrastructure and architectural components of high merit can be developed complementarily in the urban realm to create liveable, enjoyable cities.

Here, modern, integrated and sustainable flood protection not only fulfils technical requirements but also provides the city with a new destination of high urban quality. 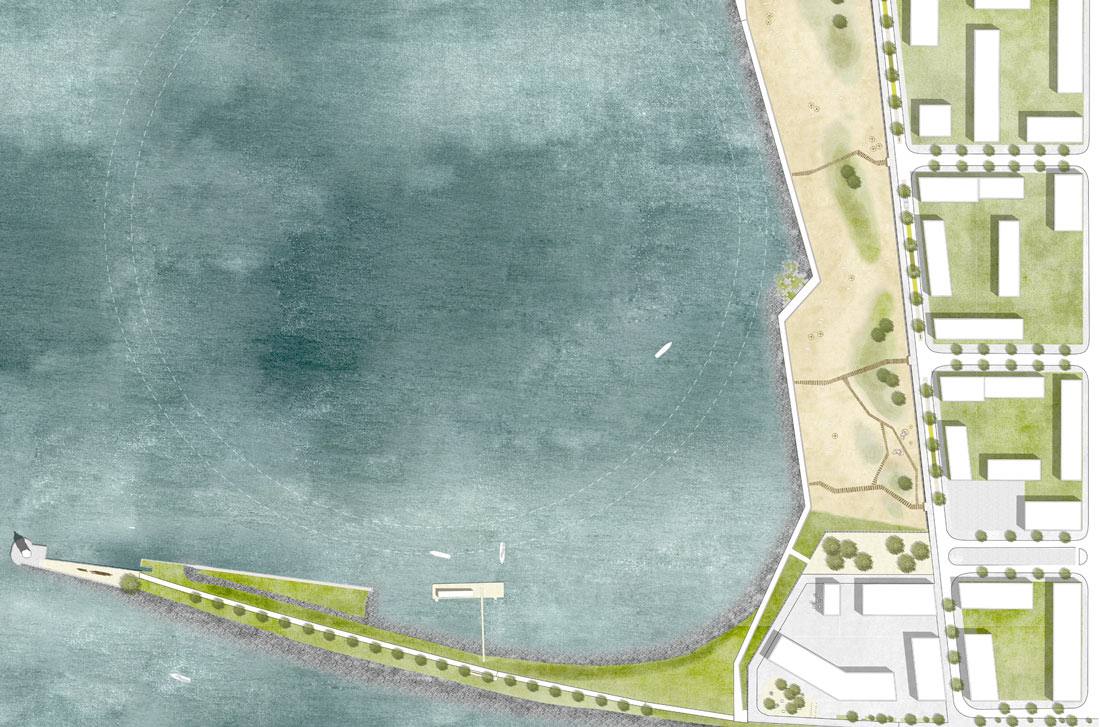