#nevicata14 was the experimental pedestrian configuration of piazza Castello, Milan, during Expo Milano 2015. 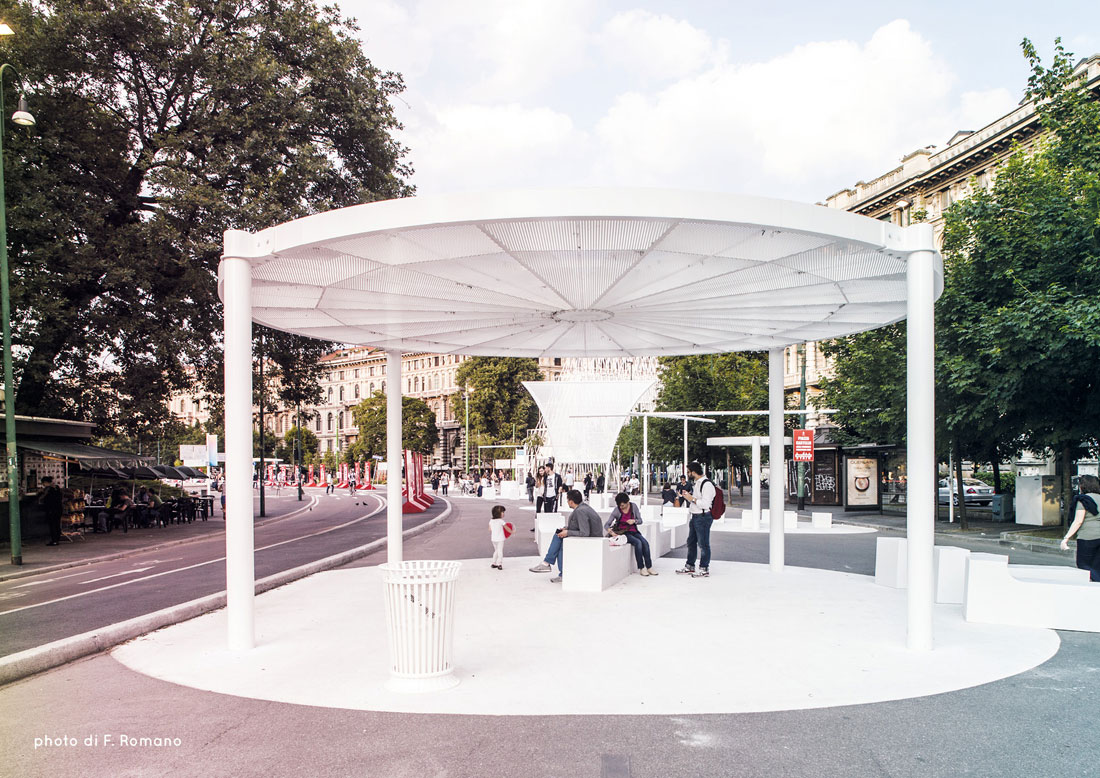 Piazza Castello is the second most important square in the city, dominated by Sforza Castle. It is a gateway between the pedestrian axis of the city centre and its main greenlung, Sempione Park. Yet, for decades, Piazza Castello had been busy with traffic. Nowadays the area is an important hub both for tourists visiting Milan city center, Castello Sforzesco and other points of interest around (Sempione park, Triennale Design museum, 4 national theaters etc) and city users accessing multiple services and businesses in the area. 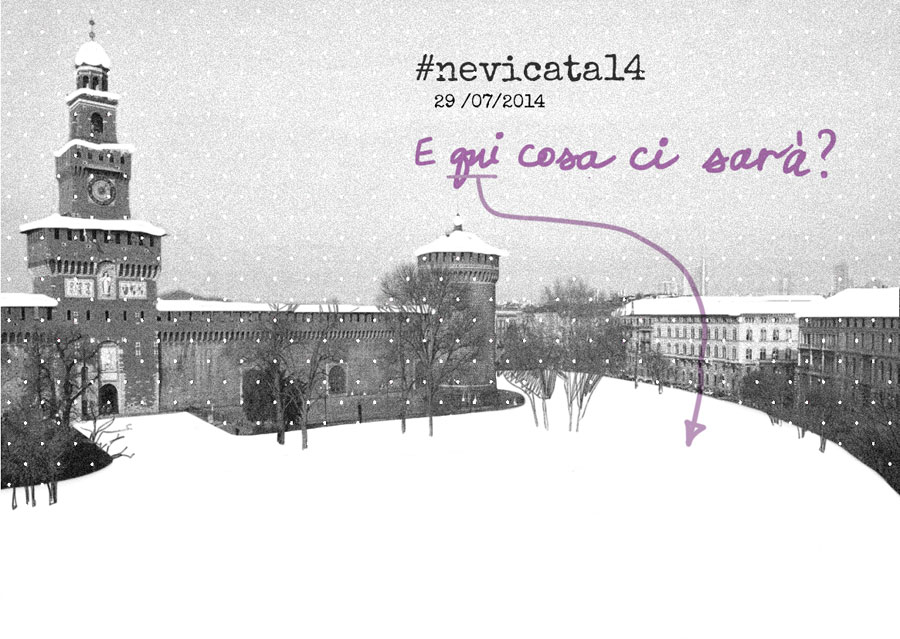 The contrast between the centrality and monumentality of area and it’s vehicular condition led Milan’s administration to render it temporary pedestrian in an experimental way for the duration of Expo Milano 2015. 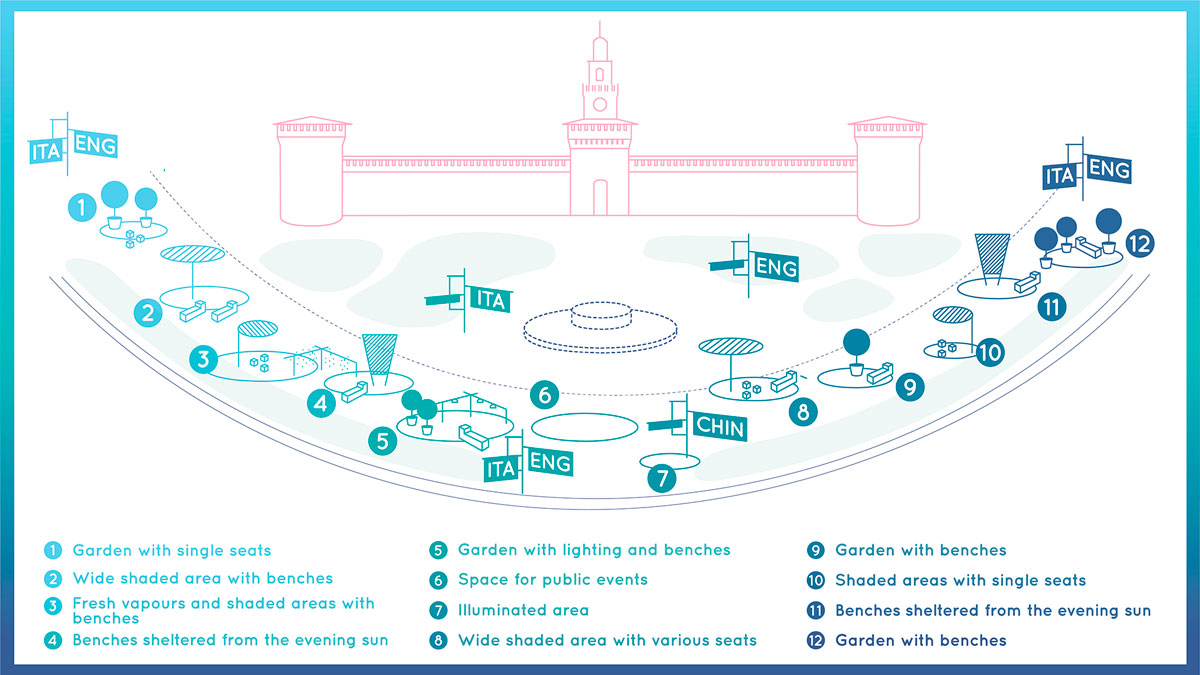 First semester of pedestrianization generated big controversies between local administration and residents of the area, which convinced city government to set up a participatory architectural competition to provide a temporary design (during Expo 2015 semester) for the area. Comune di Milano (city government) via Triennale di Milano (Art/Architecture/design public institution) organized a participatory process involving 11 Milan based design teams and 7000 citizens, at the end of which GuidariniSalvadeo & InterstellarRaccoons’ proposal #nevicata14has been selected for implementation. 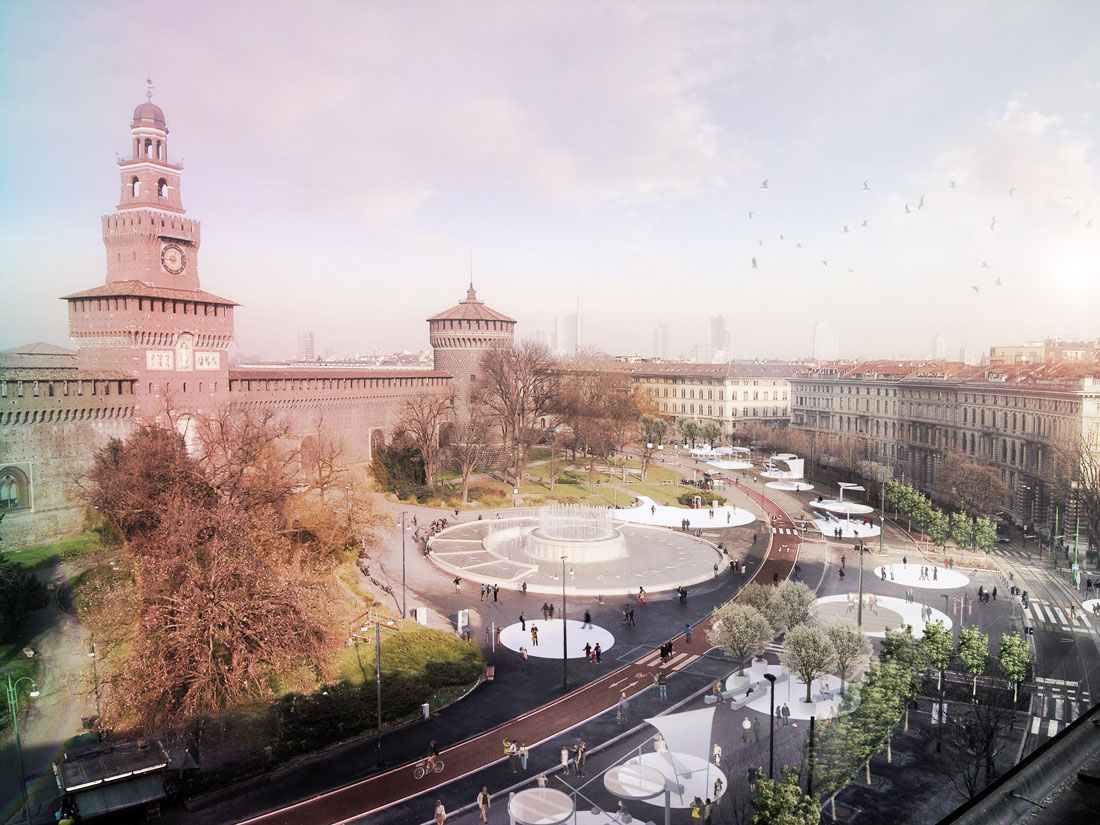 The name, #nevicata14, is the Italian for “snowfall of 2014”, an original idea to artificially recreate what happens when a thick layer of snow covers the city, erasing kerbs, traffics signs, and all the traces that cars leave on the city. This vision shouldn’t be mistaken with the pure architectural proposal, but it was instead the dream of a space supporting multiple uses, a space where everyone could find their way of enjoying the square. Once built, vision has turned into “from imagining (together) to inhabiting (together)” motto. 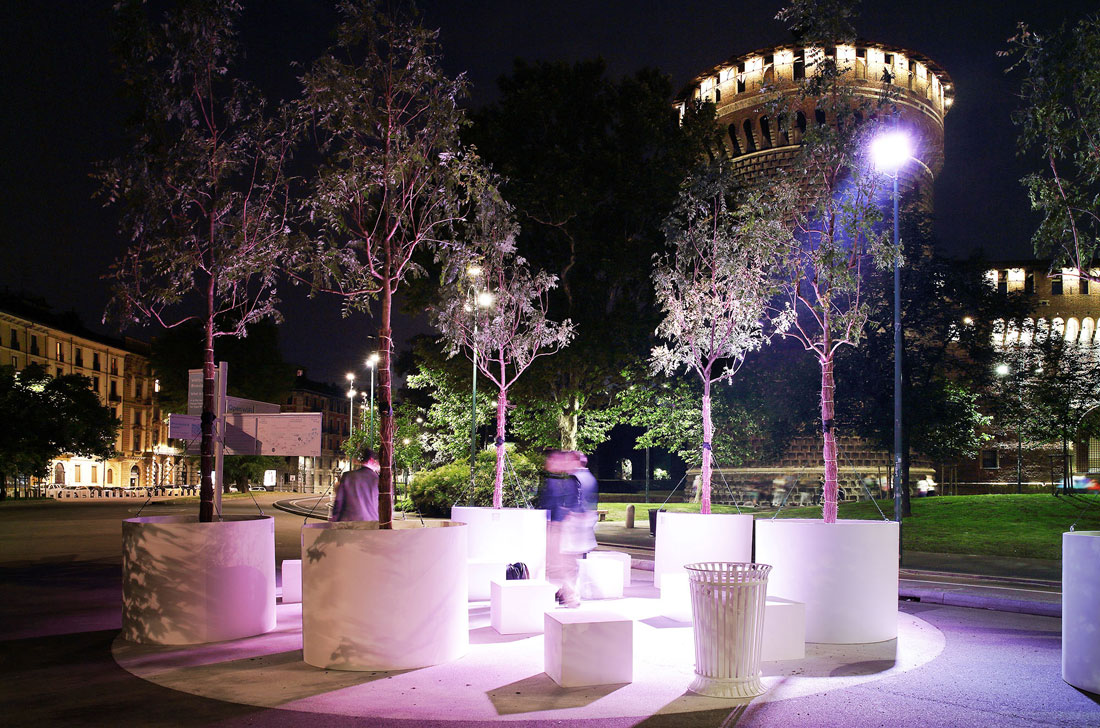 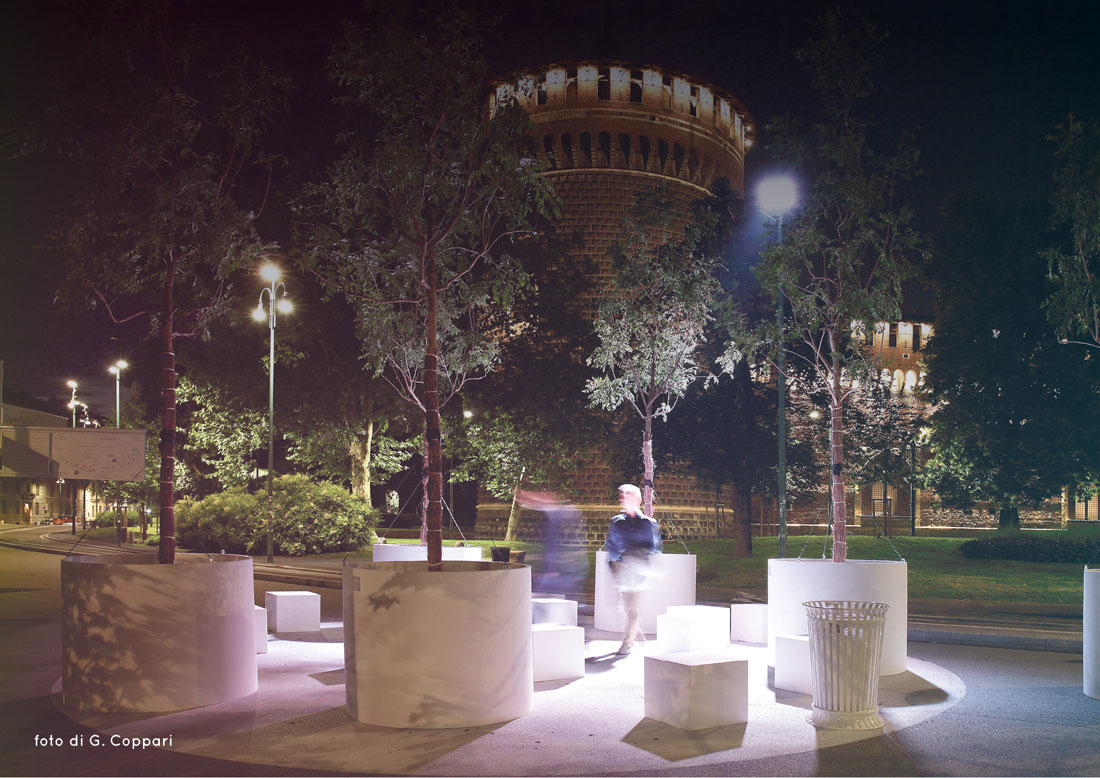 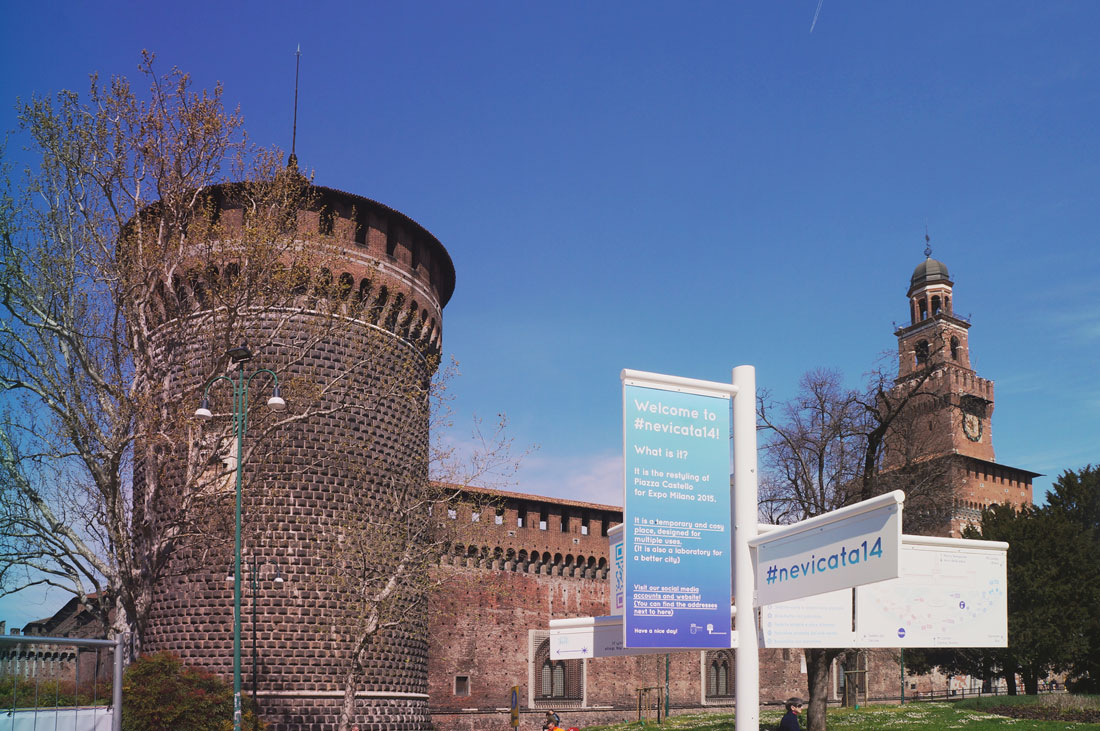 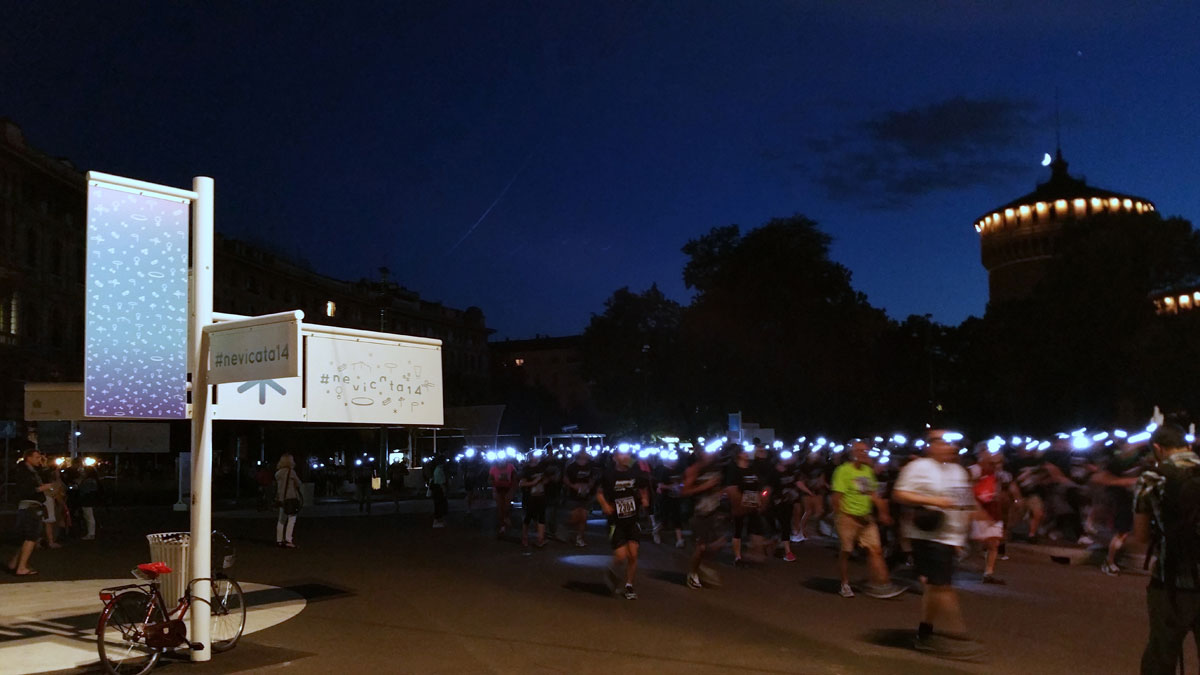 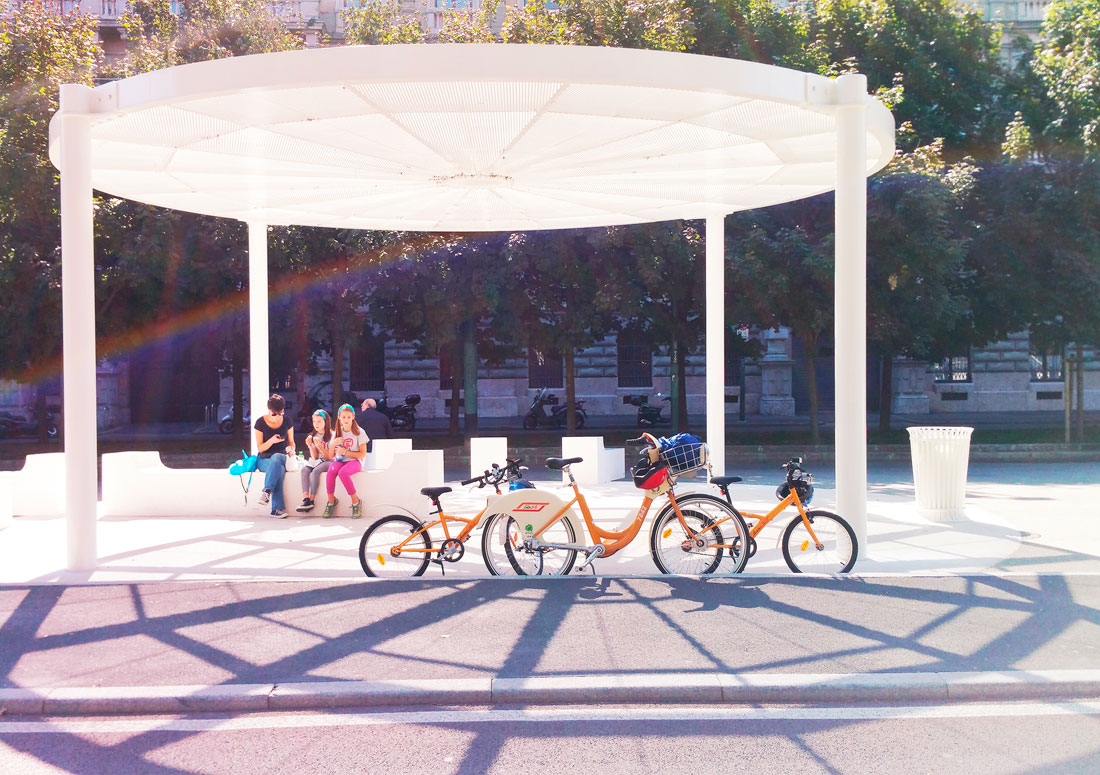 Physical: through the design of structures that defined the space of the square.

Social: through the construction of online/offline processes and services for the involvement and empowerment of the community affected by #nevicata14.

Political: through definition of a new system of rules of participation, for the use and management of the square. 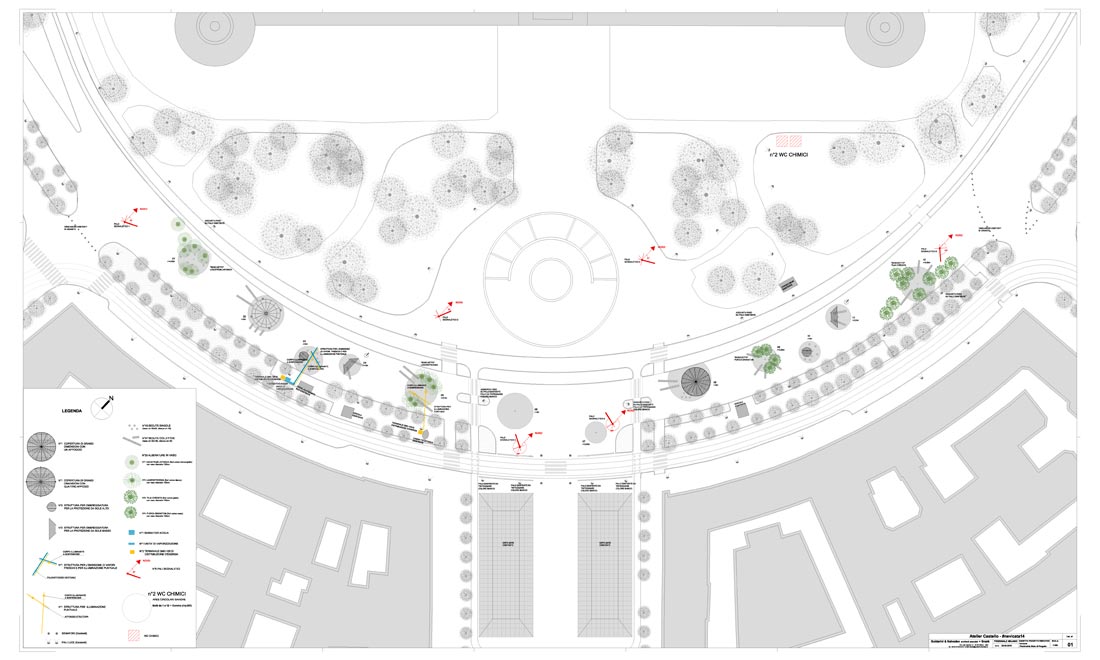 why #nevicata14 was special 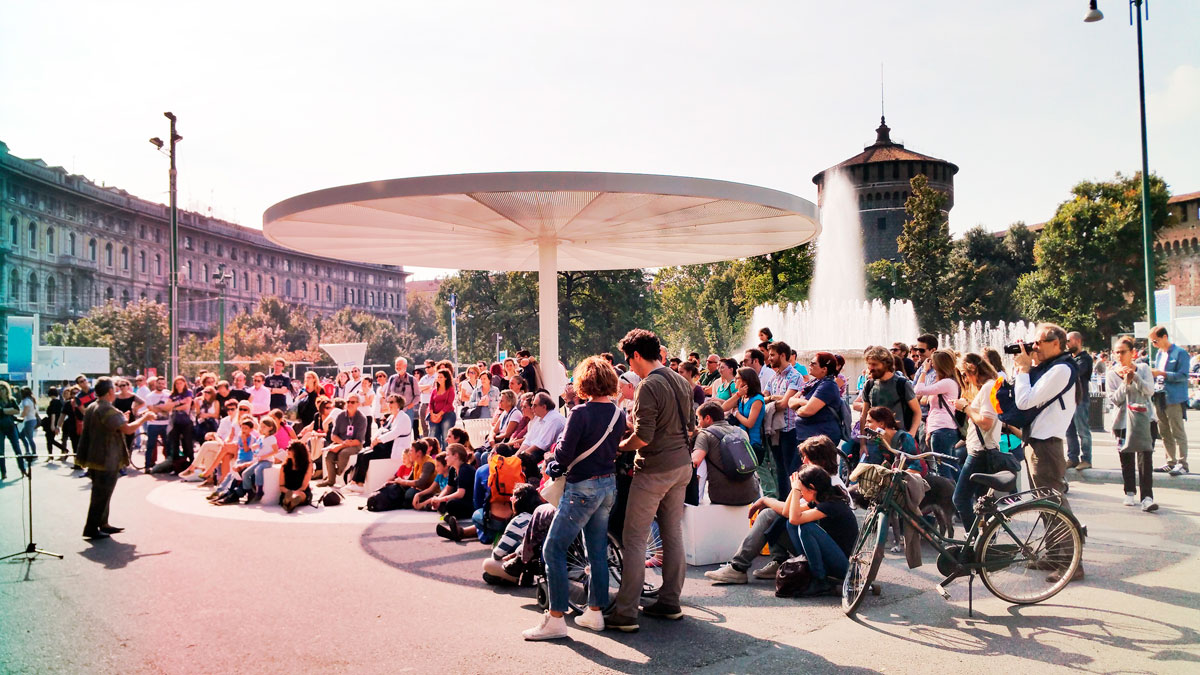 1 #nevicata14 was an experimental laboratory: besides offering a pleasant experience of piazza Castello during Expo, it worked to test a model for temporary pedestrianization of the square with the aim of producing a set of data, experiences, tools and a network of stakeholders to guide future decisions.

2 #nevicata14 was a platform for civic collaboration: in the design phase (since “Atelier Castello”) it was set up as a community of authors who collaborated for a common good: to give a vision for the pedestrian piazza Castello.

3 #nevicata14 was open: it was thought as an open infrastructure, which all citizens could appropriate and carry out activities of any kind in respect of others and the common good.

4 #nevicata14 was a public space with an identity, also visual, a website that provided easy access to all active services, the social channels that allowed maximum content distribution and dialogue with citizens.

5 #nevicata14 had a system of services – physical and digital – to support the use of the square: calendars, applications, lighting technology, media library etc.

6 #nevicata14 had a schedule of events, active since January 2015, a program of meetings to bring citizens to the project, explain and gather information, but also to provide animating activities and entertainment, including a month in Expo Gate as #nevicata14LAB .

7 #nevicata14 was an interdisciplinary project: not only architectural, but also communication, services, social inclusion and economic sustainability that in its wholeness designed an innovative public policy also thought to be replicable. 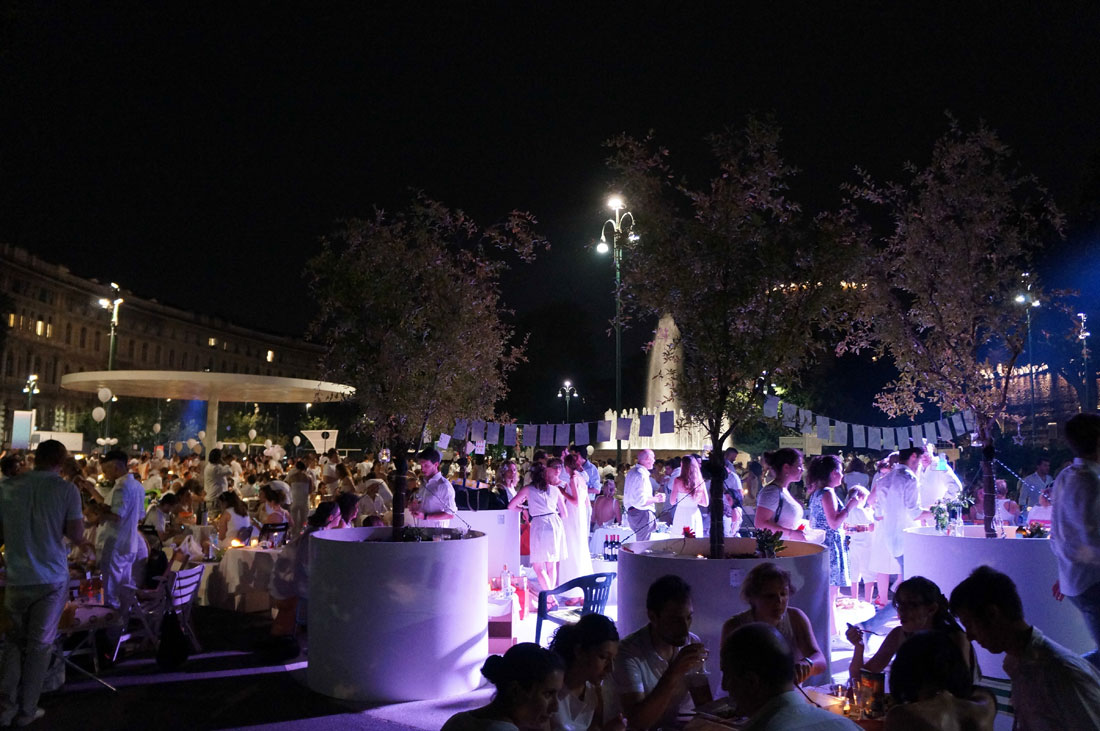 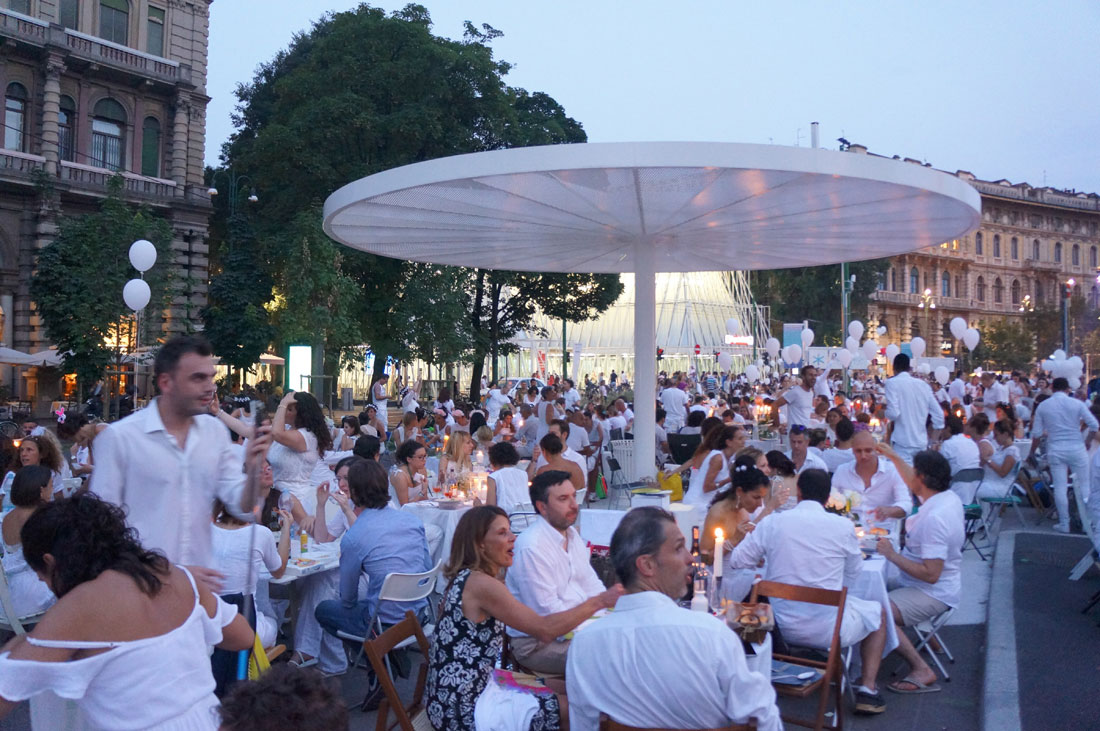 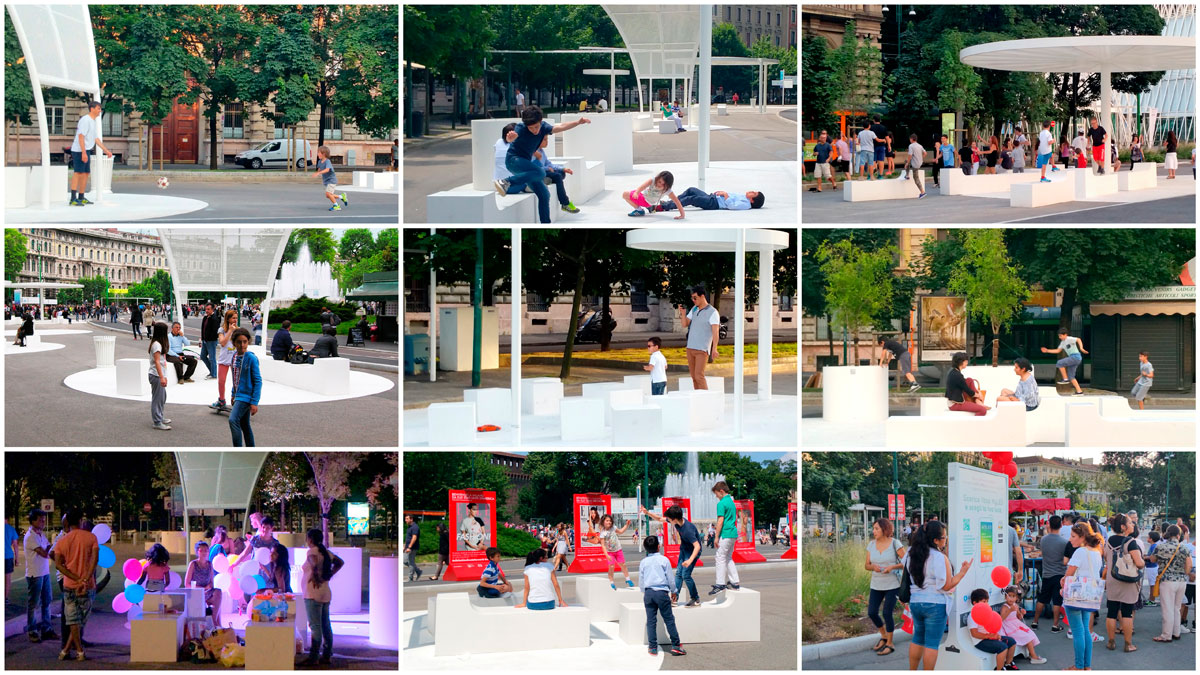 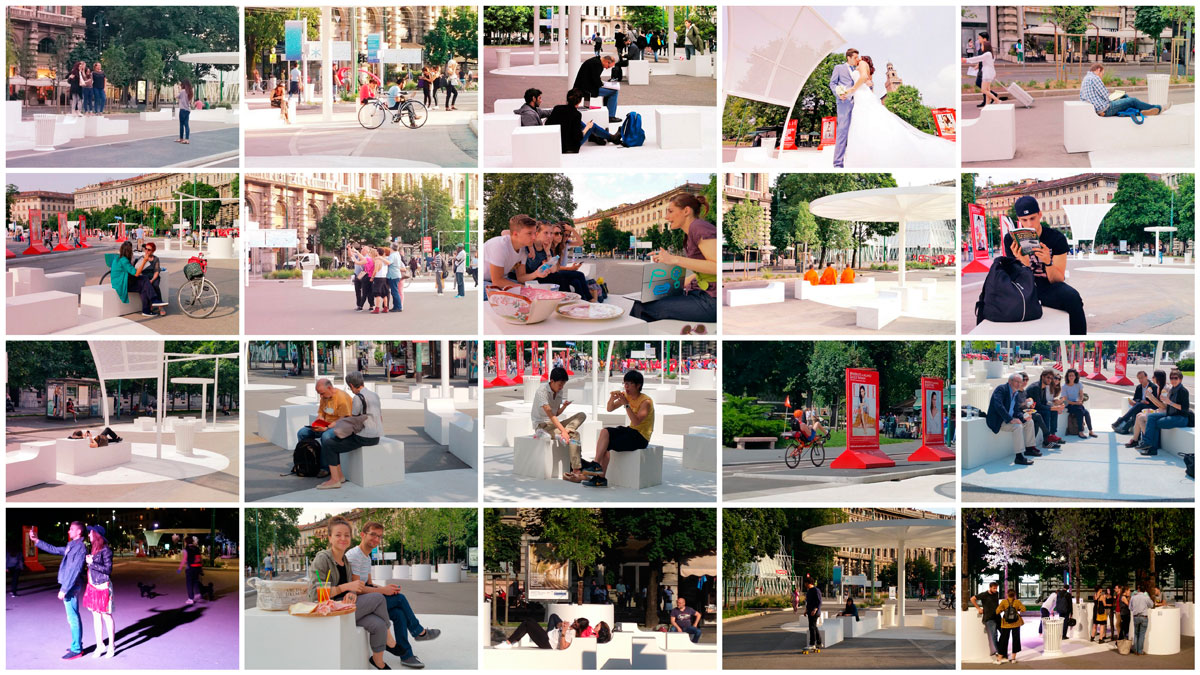