Little Island is a new public park that shelters three new performance venues on the Hudson River. Designed as a haven for people and wildlife, it is a green oasis, held above the water by sculptural planters and located just a short walk across a gangplank from Manhattan’s Lower West Side. 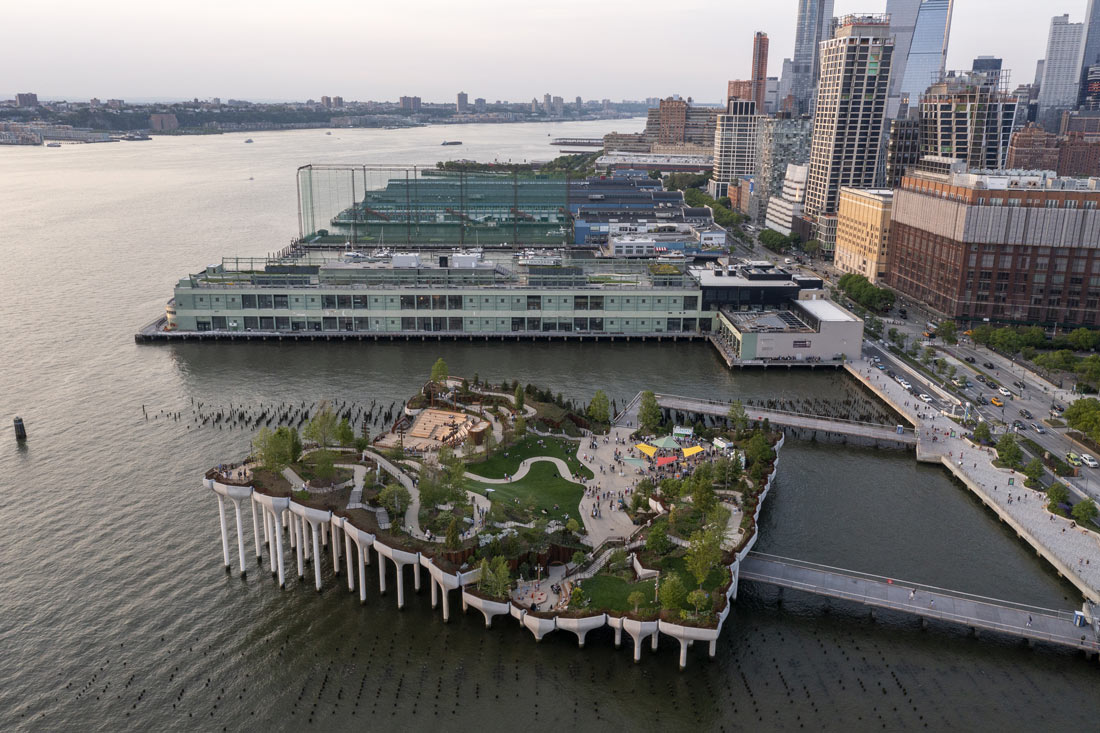 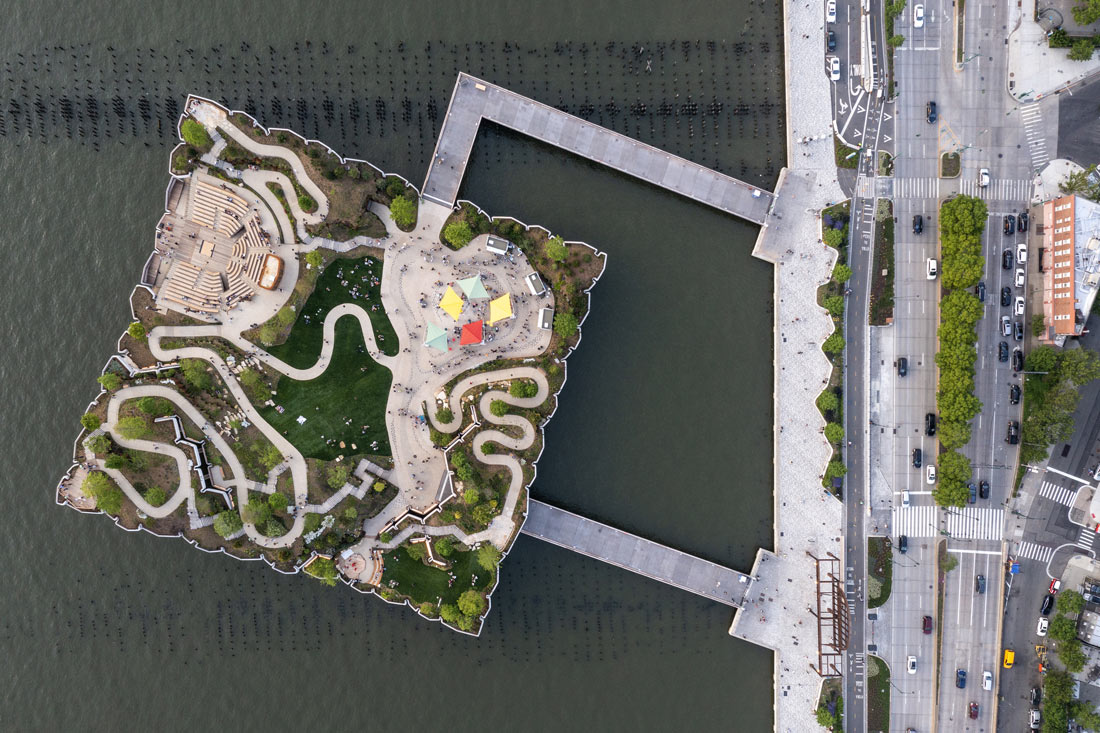 Heatherwick Studio was initially invited by philanthropist Barry Diller and the Hudson River Park Trust to create a pavilion for a new pier off the southwest of Manhattan. Instead of designing a decorative object to sit in the Hudson River Park, the design team saw an opportunity to rethink what a pier could be. The starting point was not the structure, but the experience for visitors: the excitement of being over the water, the feeling of leaving the city behind and being immersed in greenery – inspired by Central Park, where it’s possible to forget that you are in the midst of the most densely populated city in the United States. 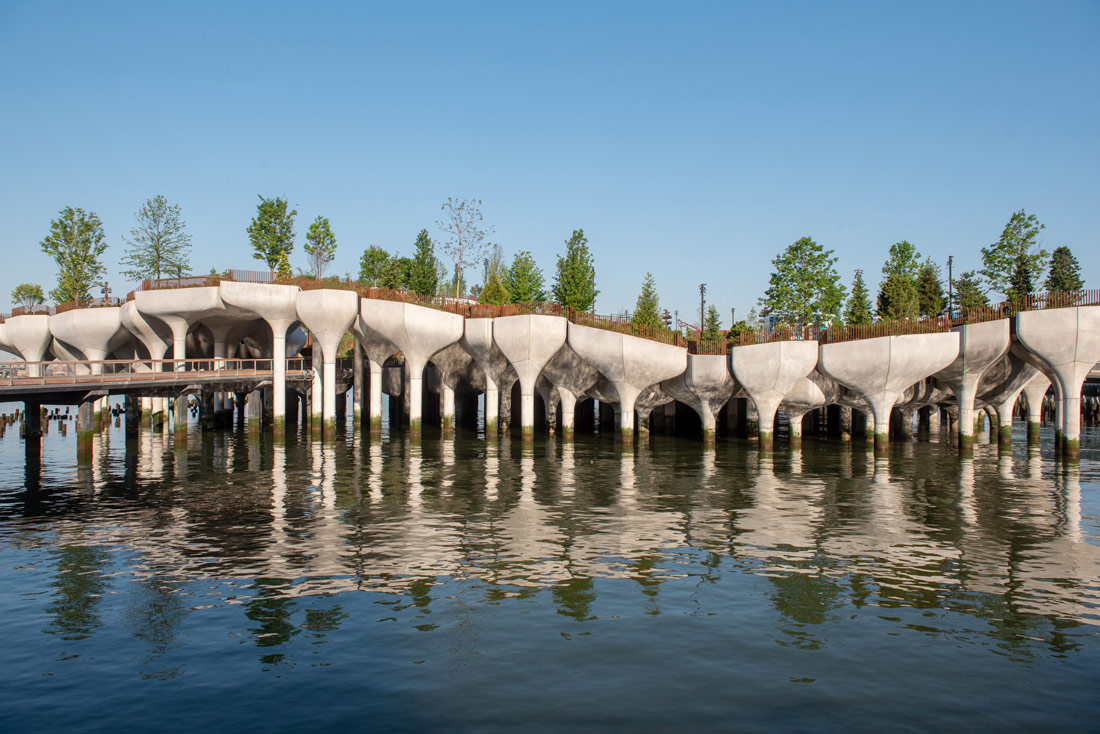 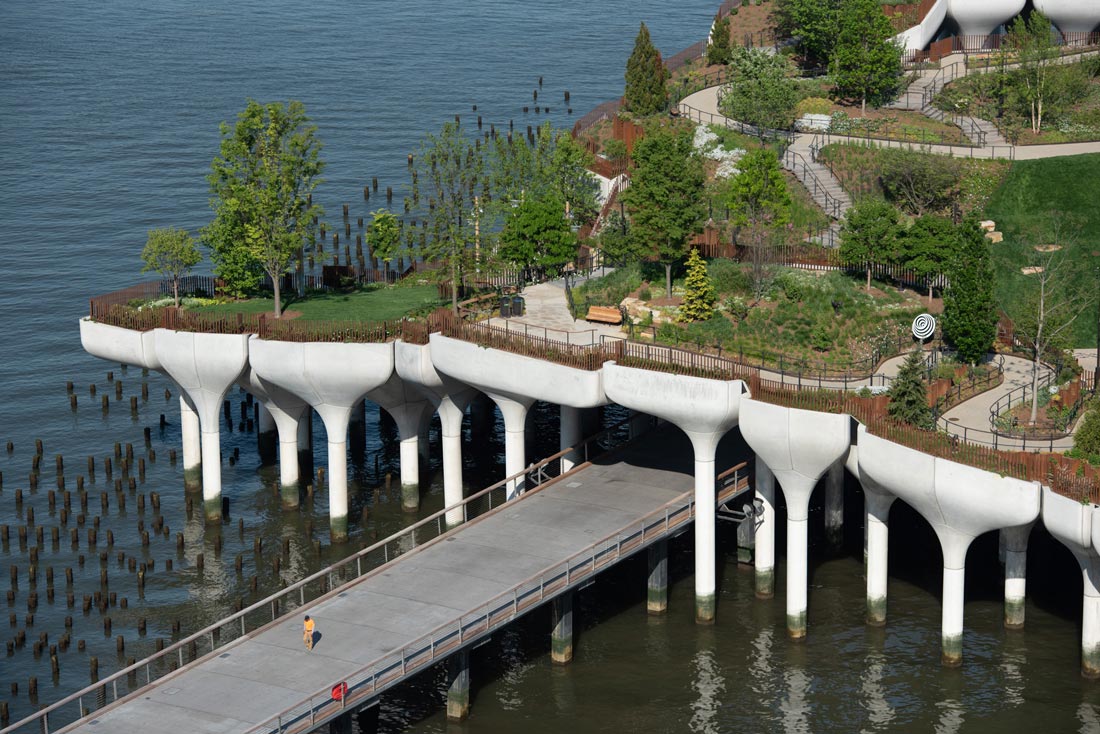 Piers were traditionally flat to allow boats to dock, but did they have to be? In contrast to the flat streets of Manhattan, the design team wanted to create a new topography for the city, which could rise up to shape a variety of spaces. The first iteration was a curled leaf form floating on the water, its veins rising like ribs at the edges to shelter the space from the wind. The idea of raising the park on its foundations came from the existing wooden piles in the water, remnants of the many piers that used to extend from the shoreline of Manhattan. Beneath the visible tips of the wood, the piles have become an important habitat for marine life and are a protected breeding ground for fish. 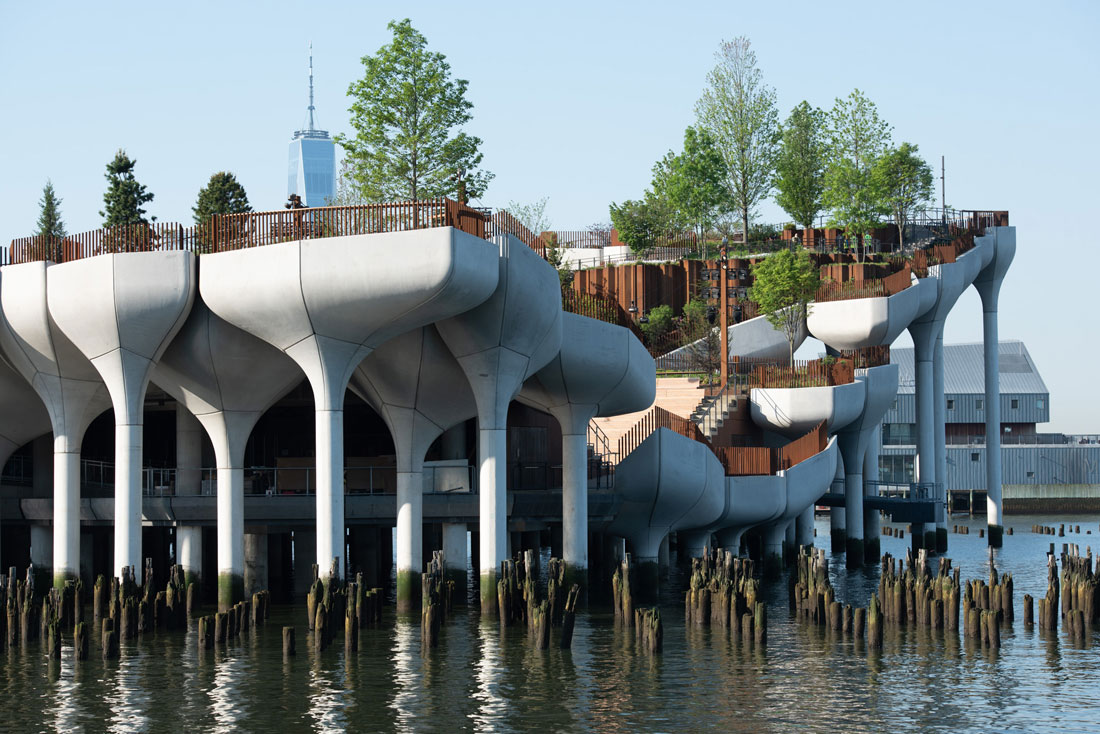 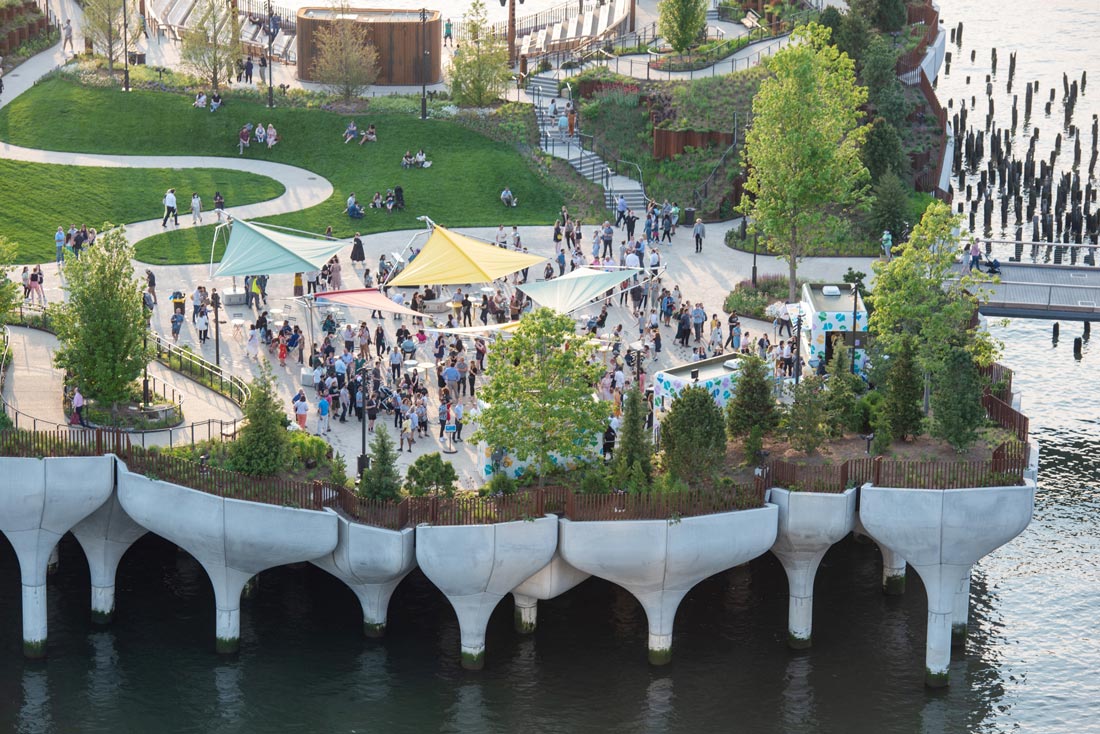 Heatherwick Studio envisaged the pier as a complete experience: a single, cohesive object, rather than unrelated elements stuck together. New piles would be necessary to support any type of pier. Instead of sticks holding up a deck, the piles become the deck – they extend into planters that join together to create the park’s surface. The height of the piles varies to create the park’s contours: the corner of the pier is lifted to allow sunlight to reach the marine habitat, and the edge falls to define hills, viewpoints and to carve out a natural amphitheater for performances. In this way, the pier and its supporting structure are one. 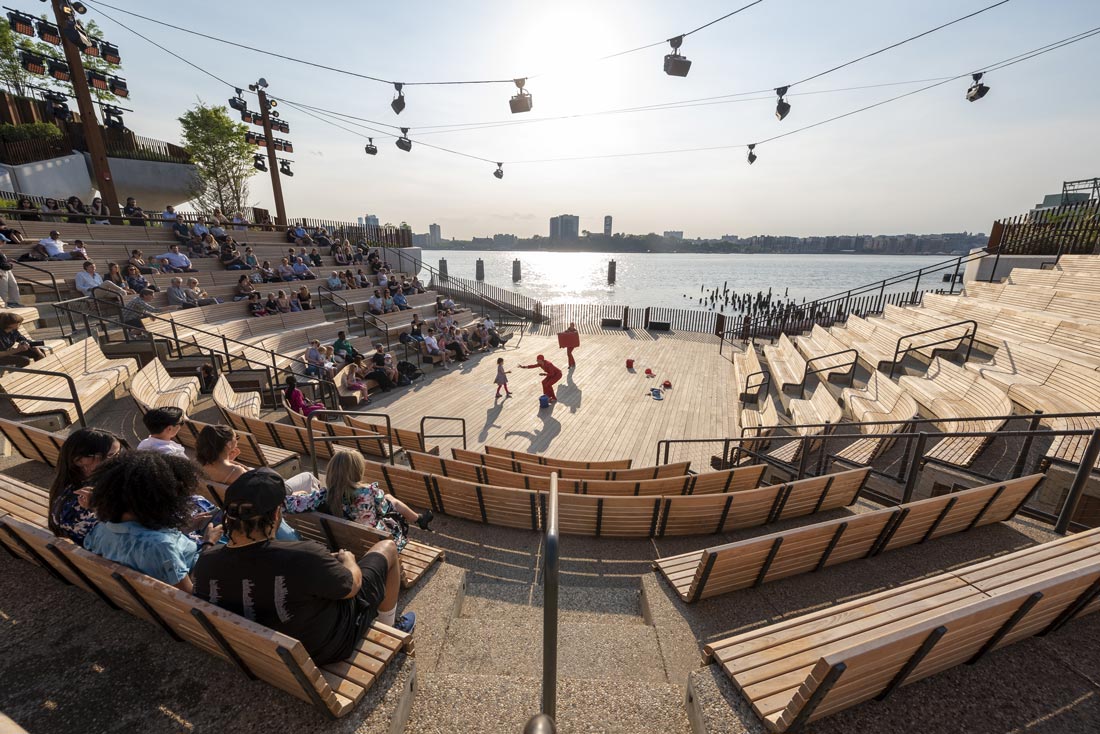 The planters, or ‘pots’ are filled with more than 100 different species of indigenous trees and plants, which encourage biodiversity and are able to thrive in New York’s climate – each corner of the island represents a different microclimate. To determine the pots’ form, the design team looked to nature and the mosaic of ice that forms around the wooden piles when the river freezes. The studio reinterpreted this in a tessellated pattern that appears organic but uses repeated elements that could be standardized for fabrication. Care was taken to vary the angle and repetition of pots at the perimeter, where they were most visible. To give the structural concrete a smooth, tactile quality, Heatherwick Studio worked closely with a local fabricator. The precast components were transported by boats and assembled on site, minimizing disruption to the city. 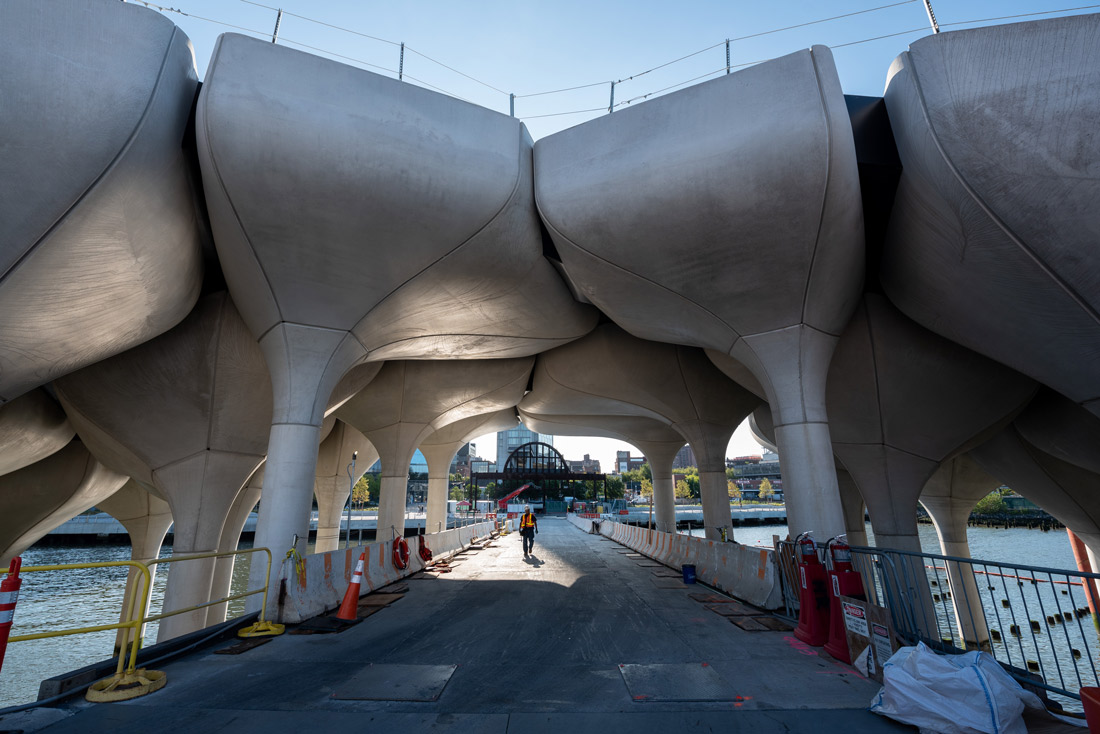 To emphasize the feeling of escape, Little Island’s footprint sits in the middle of the water between piers 54 and 56. Access is via two accessible ‘gangplanks’ and oriented in a continuation of the street grid. Inside, paths wind through trees and grassy seating areas to hidden, unexpected views. Restoring the entertainment venue that was lost when Pier 54 fell into disrepair, the park integrates three performance spaces. On the furthest edge, sheltered by the hills and surrounding trees, is an acoustically optimized 700-seat amphitheater with natural stone seating – its stage is set against the spectacular backdrop of sunset over the Hudson River and views of the Statue of Liberty. To the south is a more intimate, 200-seat spoken word stage. In the center is a flexible venue with capacity for larger scale events – its hard paving brings to the surface the tessellated pattern of the piles. 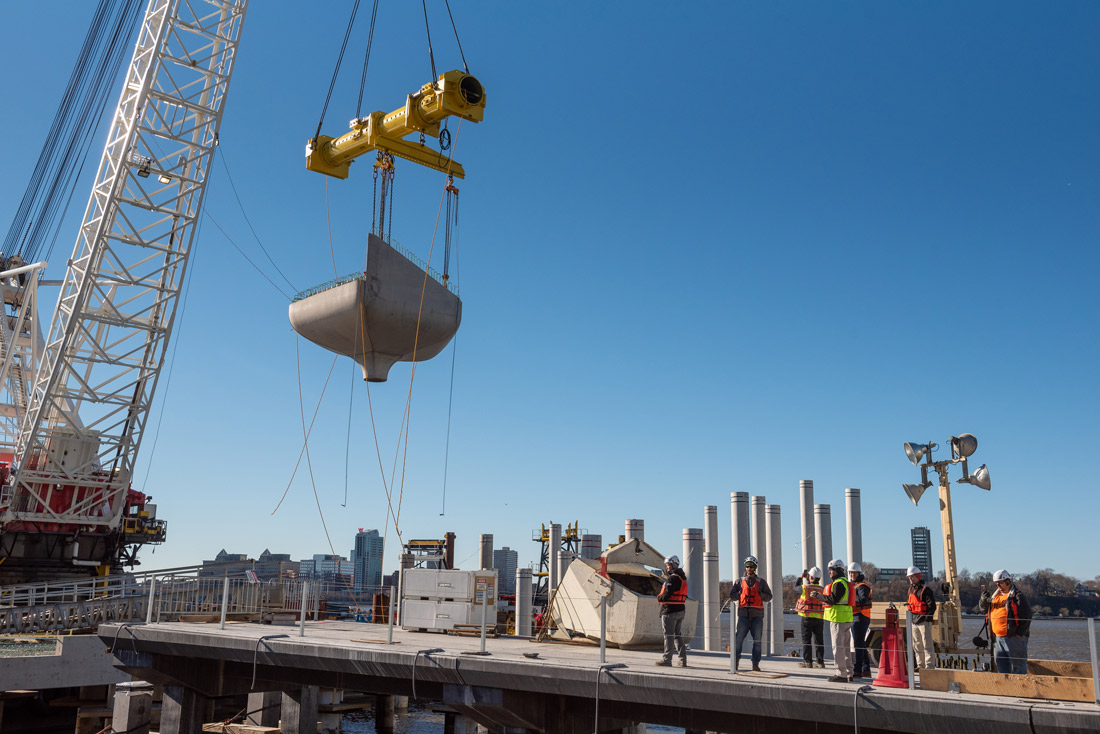