The house was designed as a sanctuary from the surrounding urban environment, as well as a series of memorable architectural spaces, in which the people that inhabit them are their conceptual core. 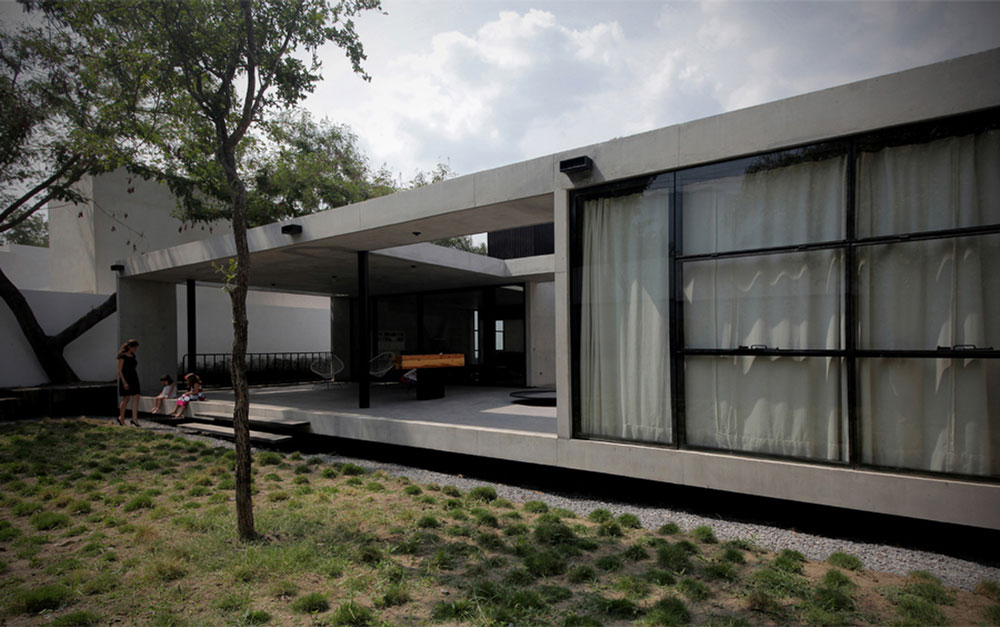 Casa 2G creates sensory experiences and moments that enrich its inhabitants’ daily lives, thanks in part to its sparse materiality and handmade features, which pay tribute to the artisan work of local craftsmen. The nature of this space contrasts with false ideas of human progress in a world dominated by appearances and trends. 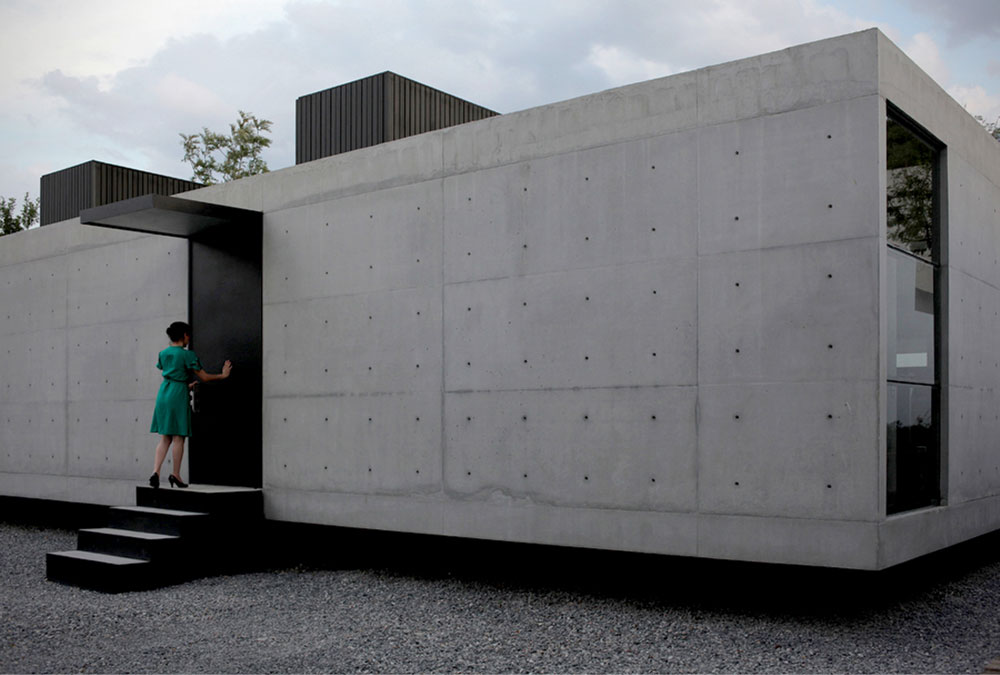 By taking a morning tour of Casa 2-G, viewers are able to experience the special everyday moments spent in the house. As the windows open, we take in the natural changes in the environment and we witness the dialogue between the house and the natural light as it evolves throughout the day.

Come nightfall, the house opens up its spaces so that the light from the fire can fill us with peace as it vibrates over the raw surfaces of the walls. In Casa 2G, ordinary routine is pleasantly interrupted and transformed into memorable moments of harmony and spiritual consciousness. 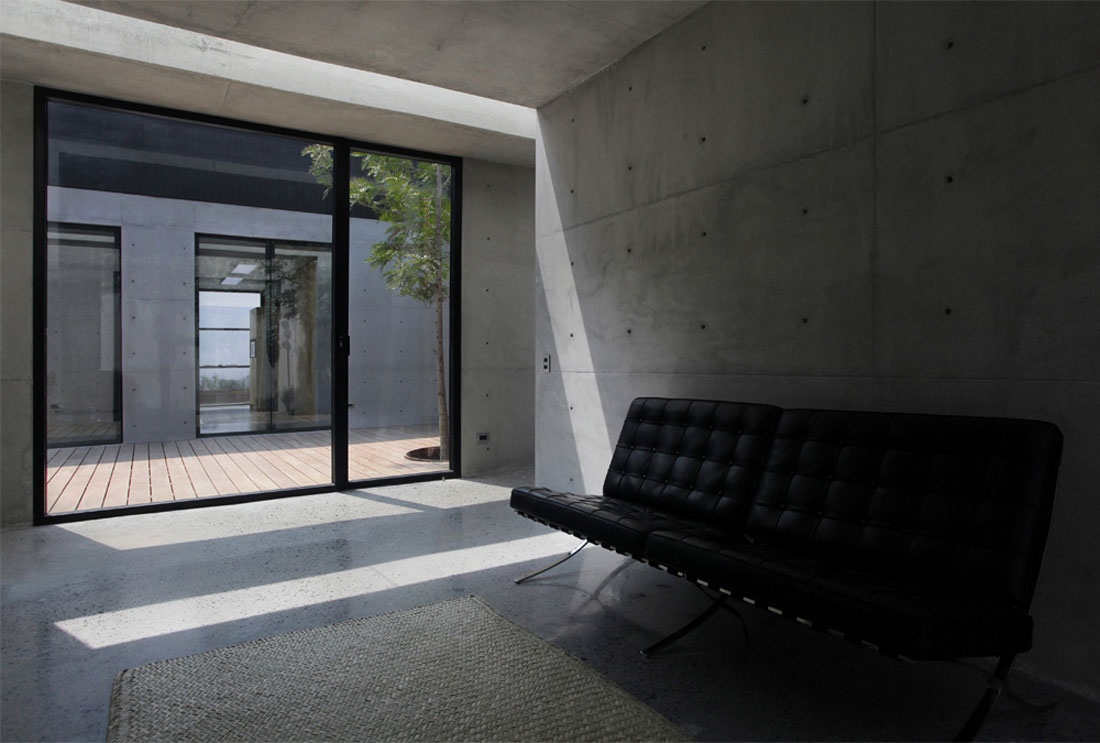 Proposed as a basic house, the project is a simple rectangular volume with a courtyard that divides the social areas from the private area. Located in a residential zone, the volume starts a few meters behind the line of the street, creating a courtyard for pedestrian and vehicular access. 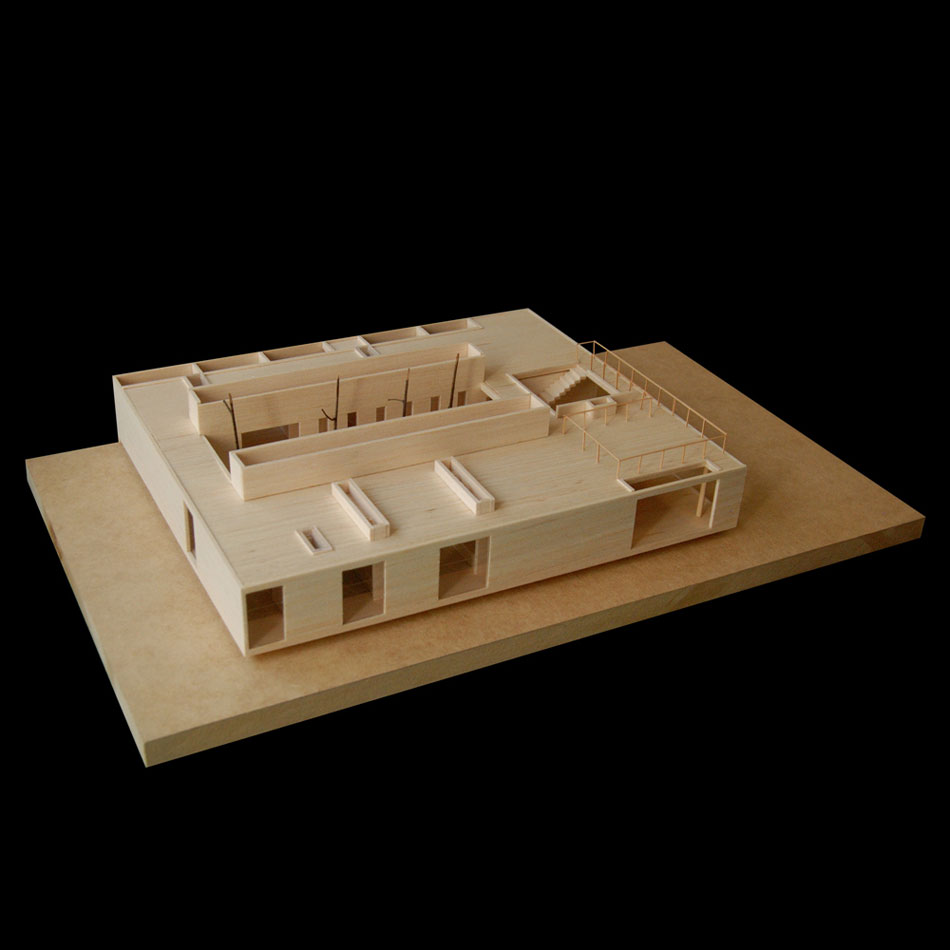 A concrete wall with a door acts to simplify the design of the house’s façade, making it as basic as possible. However, this lack of openings to the street contrasts with a wide-open interior space, which visually connects the whole social area with the central patio, the backyard and the Sierra Madre Mountains. The interior spaces are filled with light and natural ventilation and a strong dialogue with the landscape is created.

The private rooms are protected by a segmented wall that allows for privacy; also every private room has a private patio to bring in light and for ventilation. The social area is a continuous sequence of kitchen, dining room, lounge and a large terrace that connects to the rear garden. 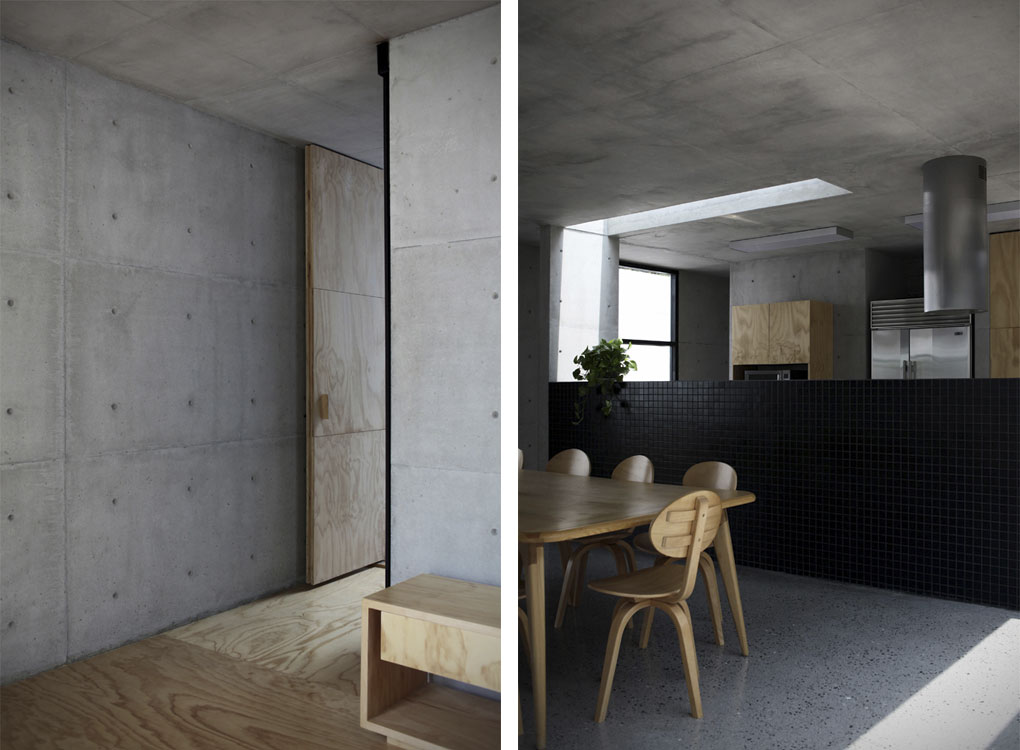 The doors, windows, metalwork and construction systems are kept as basic as possible. The materials are left in a raw and natural way. Many of them have been prepared on site using materials and local labor with the intention of rescuing traditional building systems and jobs that have been displaced by a market of prefabricated materials, which generates low local employment and a type of architecture based on repetition and mass production.

Manual opening systems for windows, skylights and doors were designed especially for the project, developed by working closely with experienced local carpenters and blacksmiths. The architecture of the house invites the users to be part of its material structure. The use of the house generates a direct experience with the materials, creating tactile sensations and a different consciousness of the elements that are part of the house at a time of extreme lack of contact between people and objects and also between people and architecture.

Thus, 90% of the components of the house were made by local labor and only a minimum of industrial materials were used to preserve the essential idea of the project. 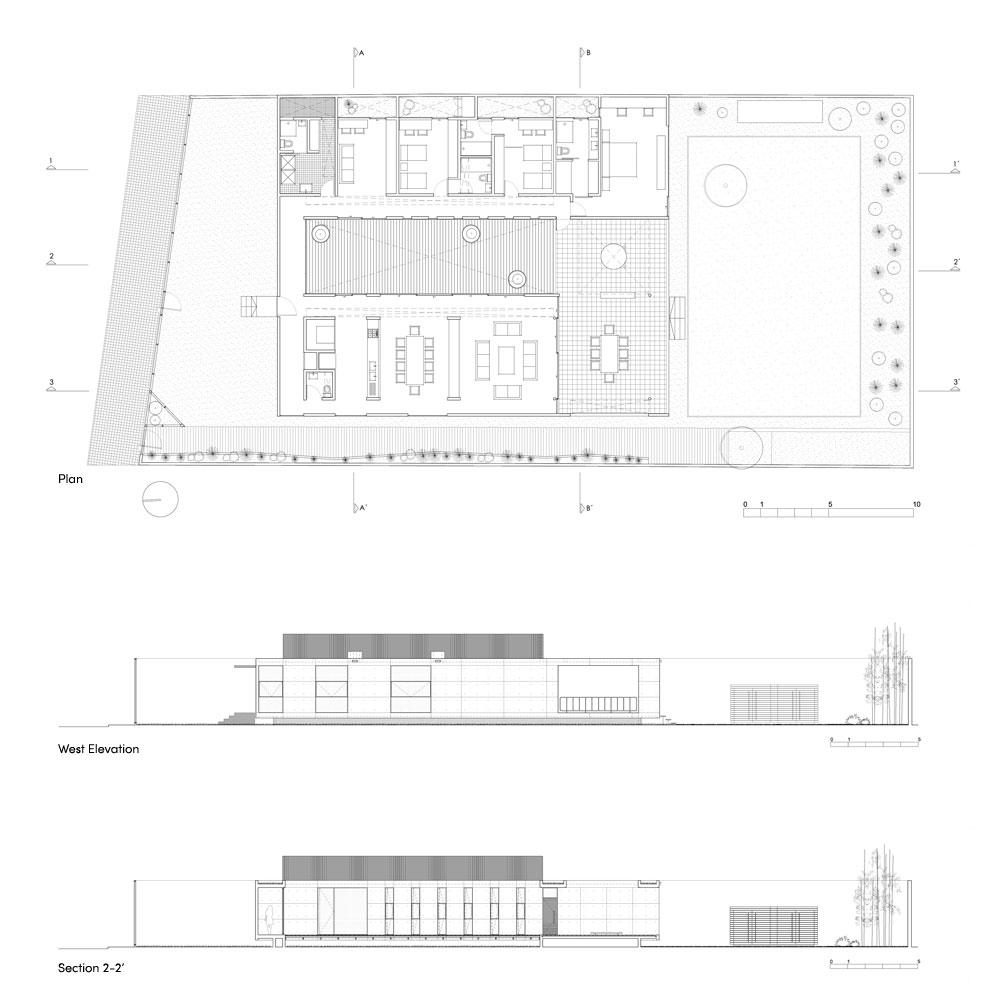 Structurally, the whole volume of reinforced concrete cast on site (walls, slabs and inverted beams) floats on a platform, which helps to provide insulation for the interior space. Also, the orientation of the house ensures the protection from incidenct solar radiation, taking advantage of the existing trees on the site and the higher volumes of neighboring houses to provide shade. 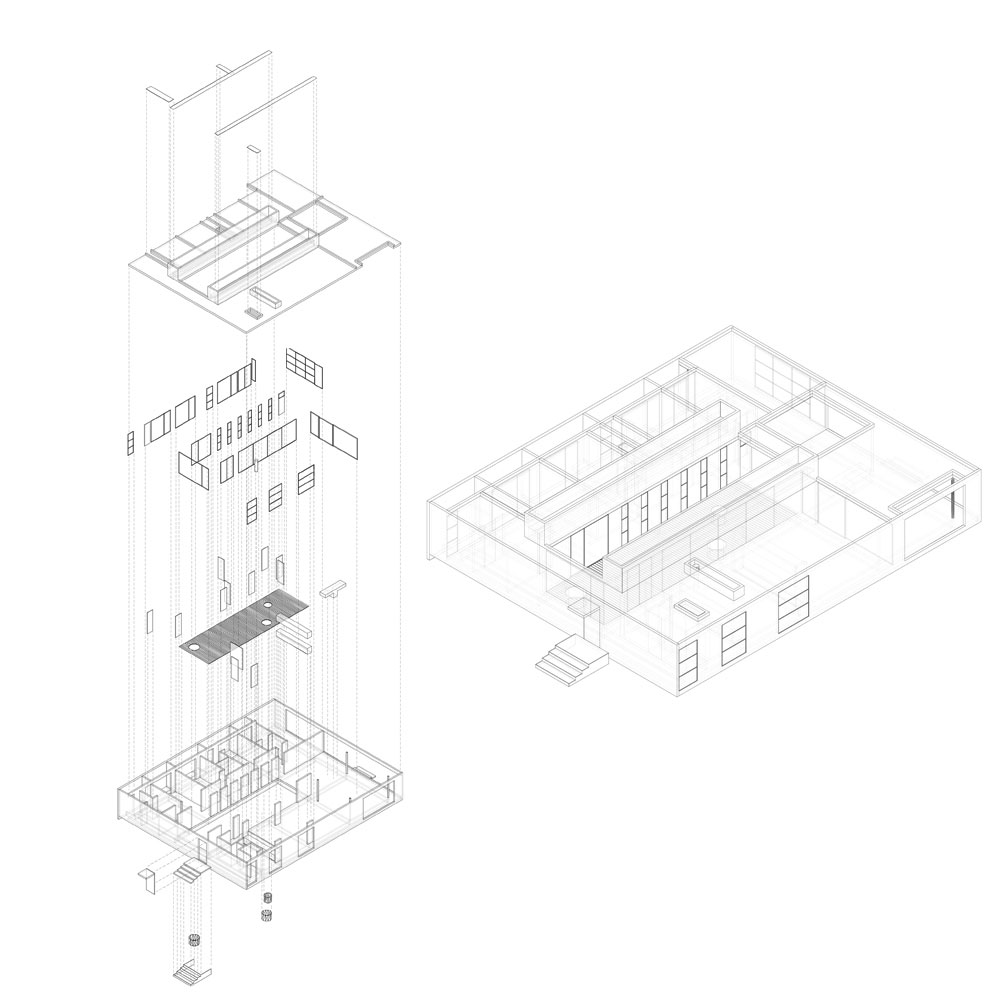 The house is a reinforced concrete monolith that has been perforated to create the interior space, which is then defined with a glass membrane to emphasize the continuity of the material in the floors, walls and slabs. In this way, its qualities are gradually transformed by the movement of the light and the shadows, which occurs both inside and outside of the house during the course of the day.