The Scarborough Civic Centre Branch, the 100th for the Toronto Public Library, demonstrates what a library can be in the 21st century. Technologically adaptable, welcoming to an ever-growing and diverse population, and celebrating design, the branch transcends its primary role as a local community hub and acts as a point of pride for the city at large. 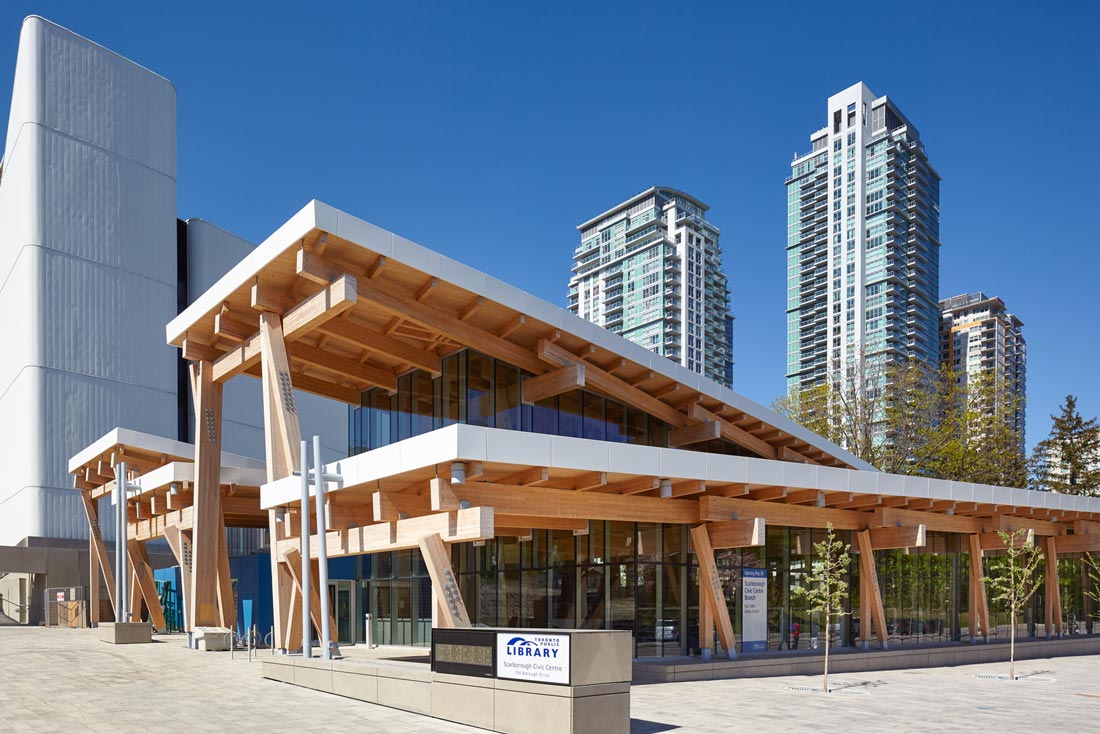 The library unfurls at the southern side of the Scarborough Civic Centre, an icon of soaring white shapes designed in 1973 by Moriyama & Teshima. Like the juxtaposition of the sheer cliffs and horizontal shoreline of the nearby Scarborough Bluffs, the new structure contrasts the Civic Centre’s vertical faces with its low, sprawling roof bands. 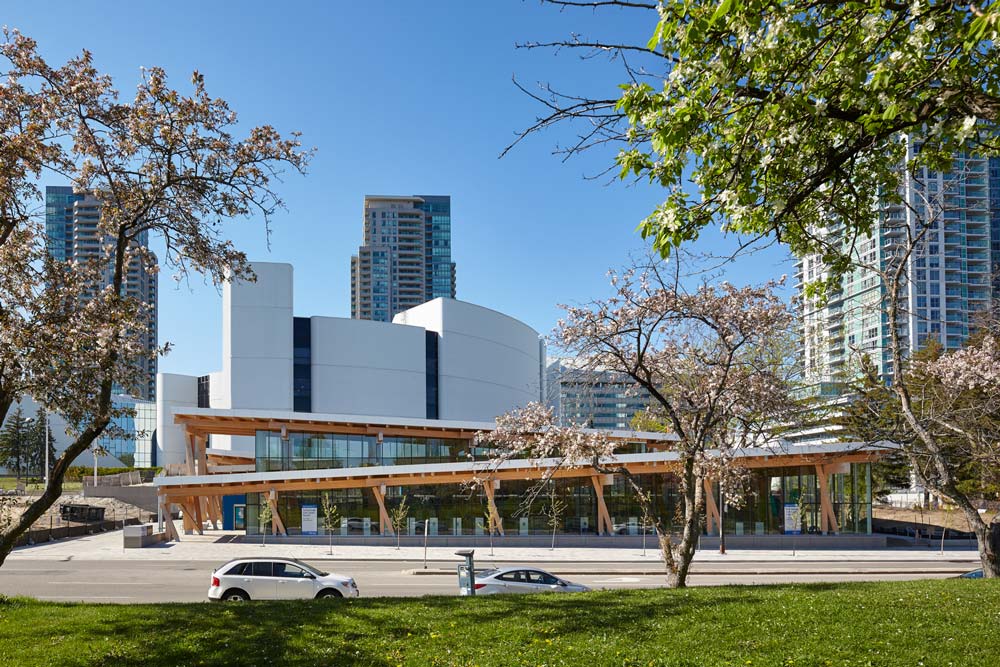 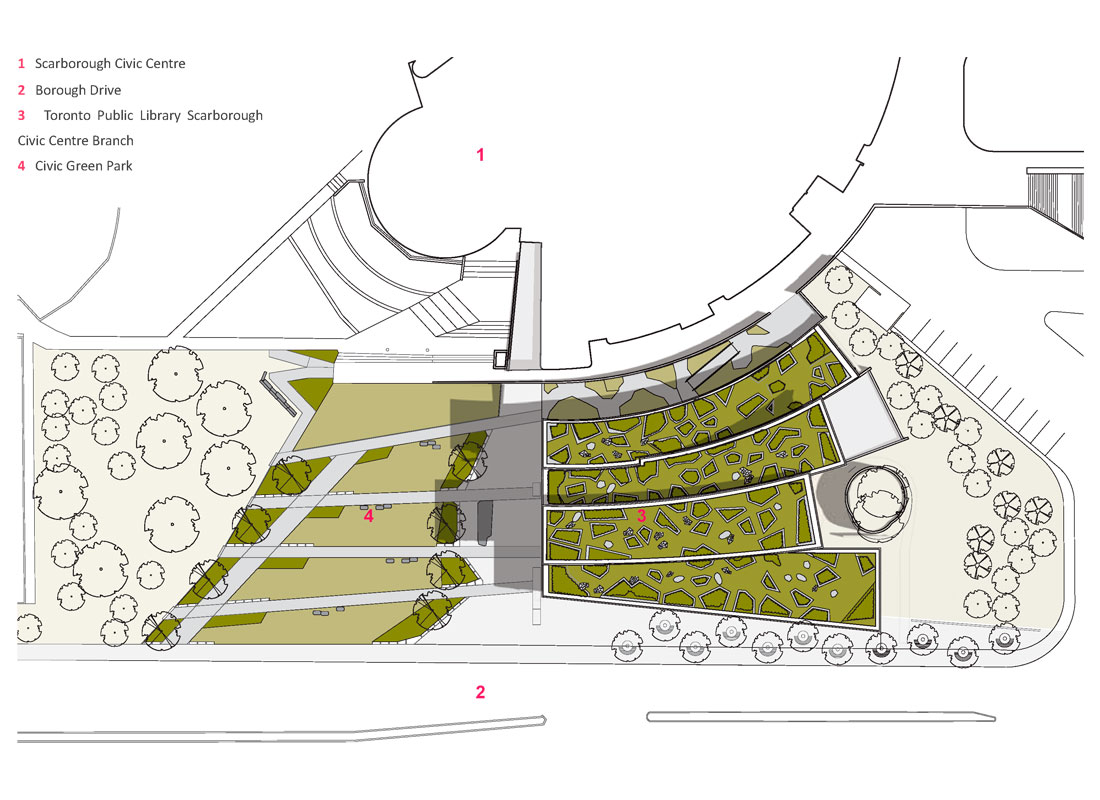 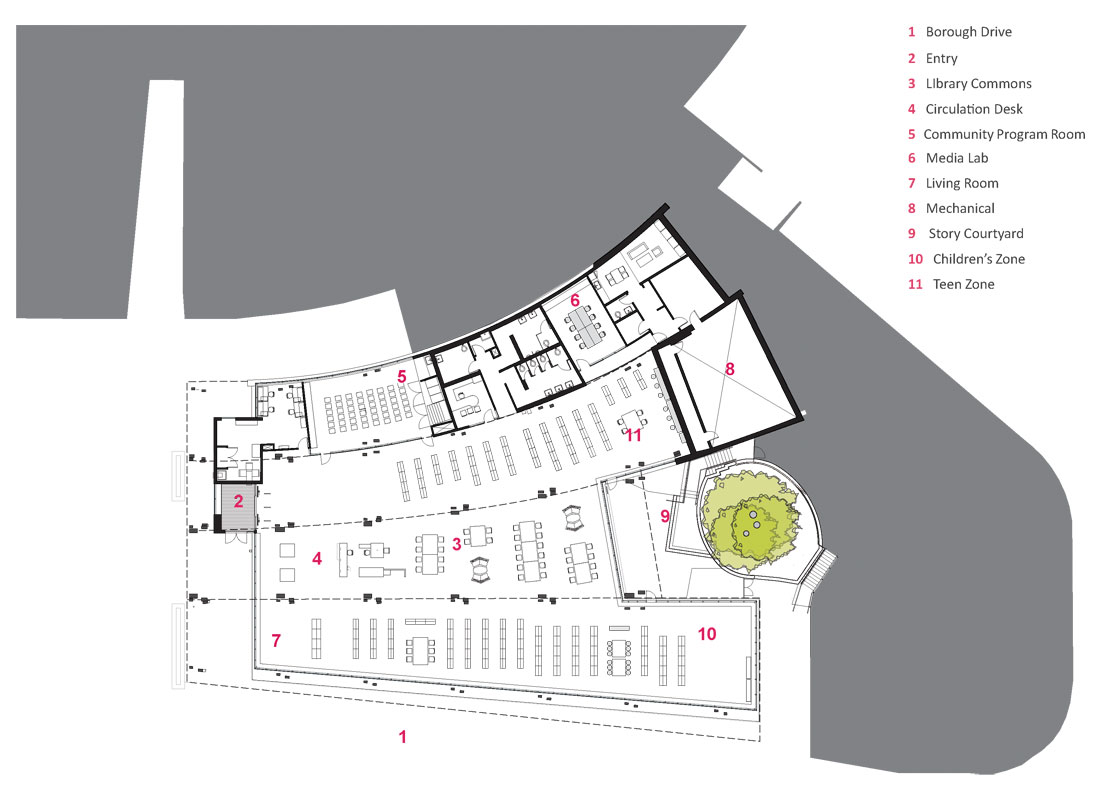 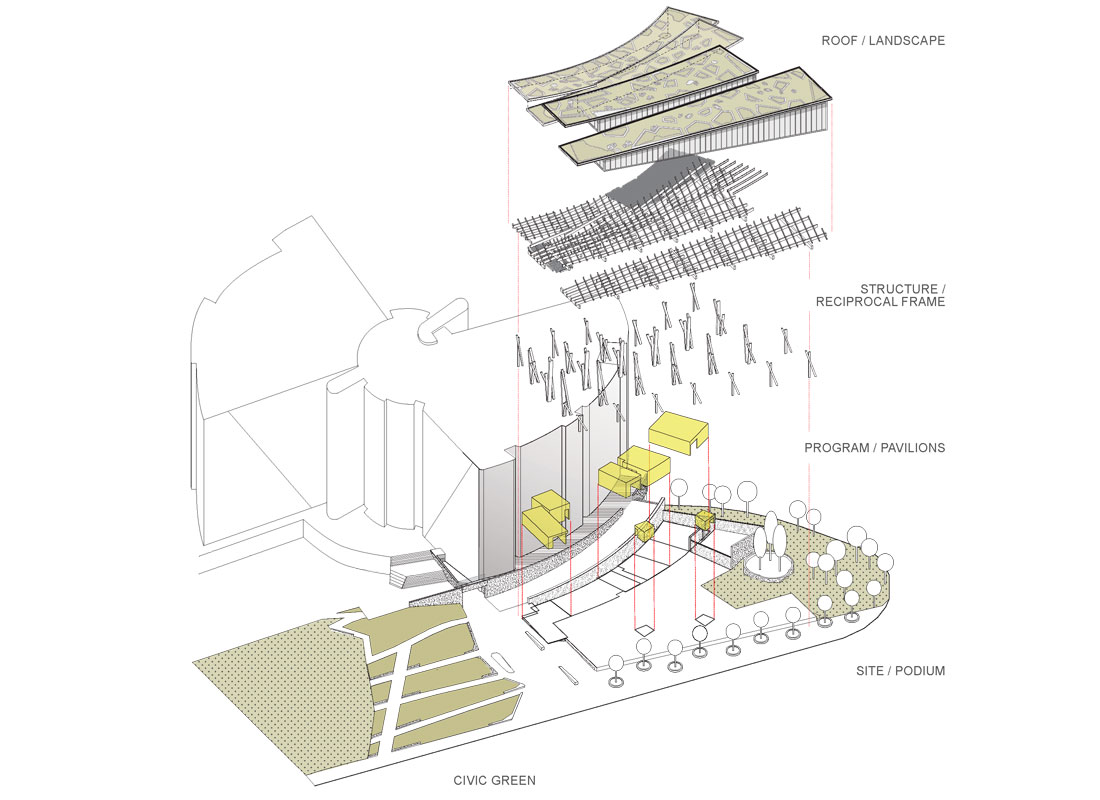 The architecture was conceived to create a green respite within the immediate, heavily urban context. Four roofs, each a ribbon-like band and planted with local vegetation, will, once-rooted, be stirring to both passers-by from the street and people within the library, who will see the ornamental grasses and plants through the building’s many clerestory windows. With much of the roof planted, the building replenishes the grassy hill it supplants.

The library’s strategic position at the south end of the Civic Centre further animates the surroundings by creating several distinct zones and connections. Near the library’s main entrance, slanting columns enliven a new plaza along Borough Drive. At the west end, a new urban garden graces the edge of a grand pedestrian walkway and creates a second front entrance to the Civic Centre. To the north, a gently sloped and planted ramp provides barrier-free access to the Civic Centre’s Albert Campbell Square (as well as a view over the lowest part of the roof structure). To the east, the building envelopes three existing oak trees, showcasing their slender grace through expansive windows, echoing their trunks with the interior columns. In the warmer months, the courtyard adjacent to the children’s area provides a furtive nook for young minds. 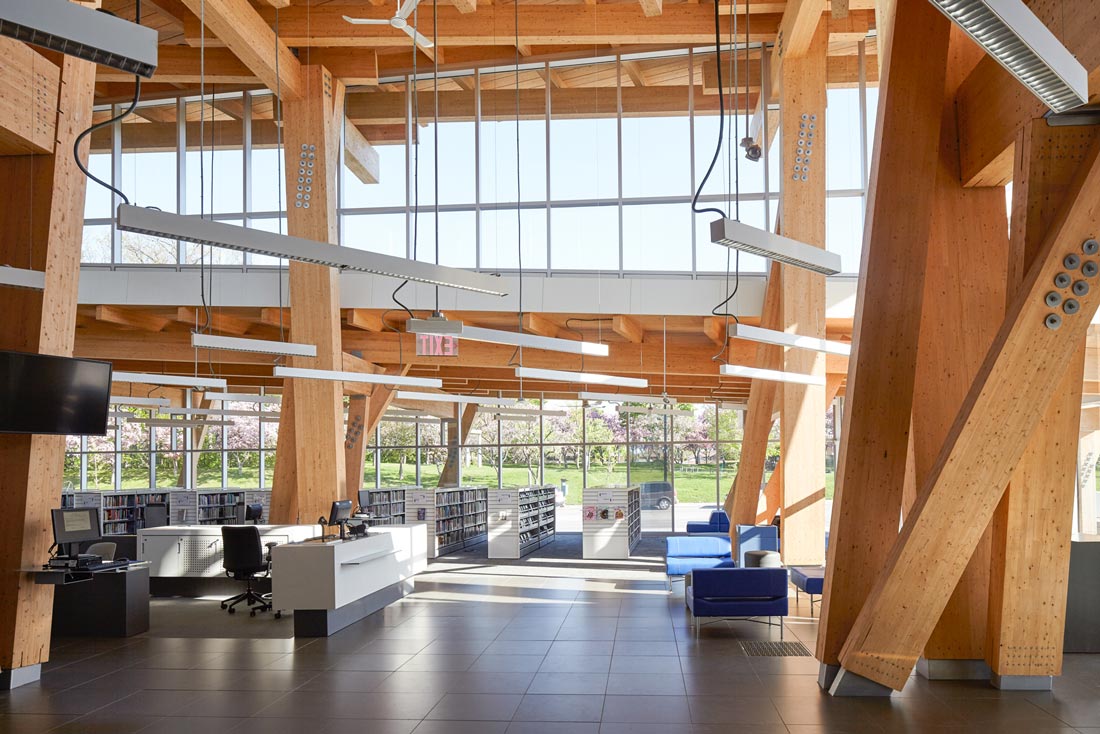 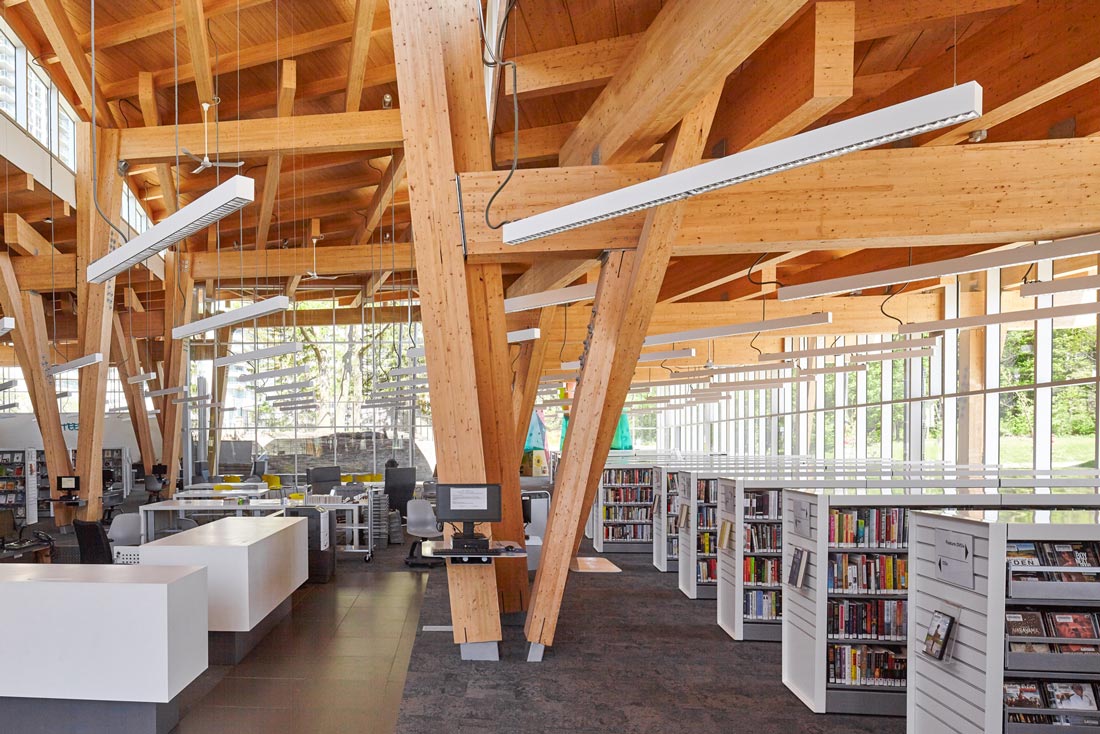 Much as the greenery will constantly change, the library itself will also be ever evolving to suit the needs of the surrounding, quickly densifying community. To ensure maximum flexibility (as well as barrier-free accessibility), the open-concept, 14,500-square-foot branch rests all on one floor. All the tables and all the stacks are on wheels for easy reorganization. The raised podium floor has a grid of moveable electrical and data connections that can be re-arranged as needed. Even the two separate rooms adjacent to the central hall — the innovation hub (with 3D printer) and the multi-purpose room — are portioned with glass walls to allow for visual continuity. Although the stacks are currently arranged by age, they all ring a central gathering space and are in close proximity to one another. That way, serendipitous meetings can occur between different demographics, and the space can help bring the community closer together. 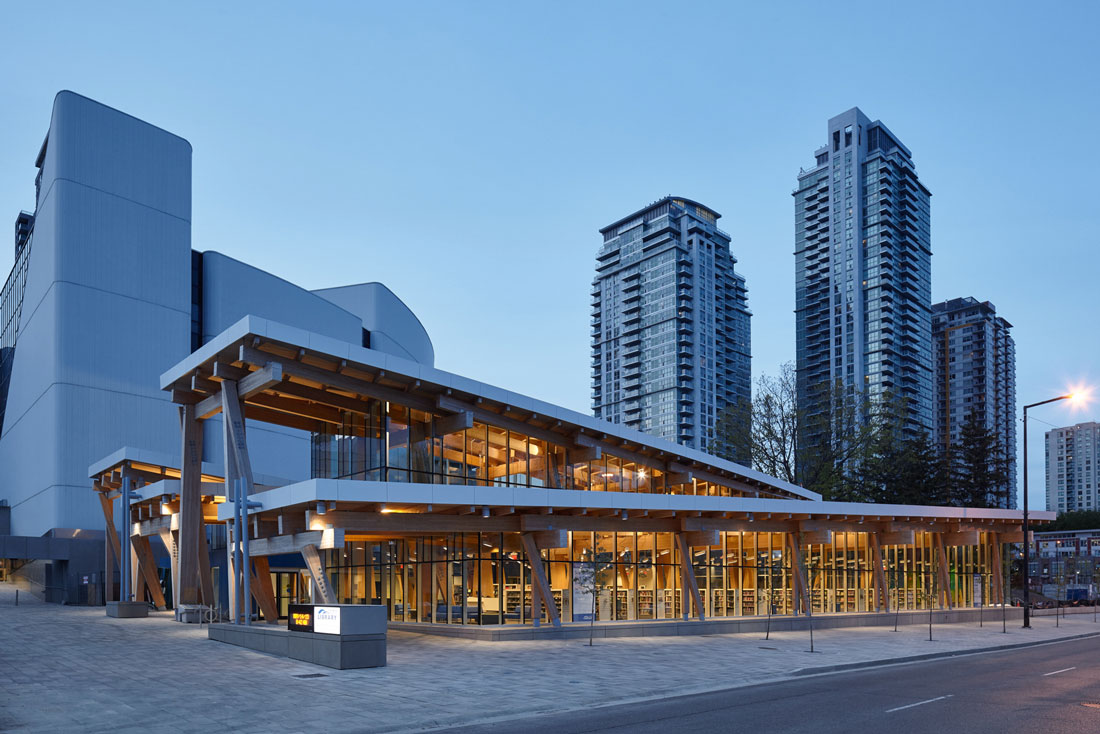