Re-urbanizing the area known as SAPÉ was an initiative of the Municipal Housing Secretariat of São Paulo. The action involved 2,500 families living in precarious dwellings. The design concept for the urbanization of Sapé was to promote the urban stitching of both banks of the watercourse by designing public spaces. A survey of the physical and social characteristics of the surrounding community showed urban discontinuity in various stages of deterioration and precariousness. Thus, the project becomes a tool for inclusion to the extent that its actions would offer opportunities for connecting people, allowing social reunions and exchanges within the urbanized social space. As infrastructure and housing projects converge in urban design, spaces are created to improve urban mobility, environmental quality, housing, recreation and work that will enhance the sense of belonging and cooperate to preserve and improve quality of life in the city.

The main goals of urbanization are namely to remove families in situations of risk, to implement urban infrastructure in existing dwellings and to build new houses in the area. Therefore, beginning with the areas spared from mandatory removals, other possible settlement areas adjoining the green promenade alongside the Sapé watercourse were surveyed. With the re-urbanization, three areas for new buildings were created, while public space was maximized by creating connecting points in the community encompassing the neighborhood and schools. 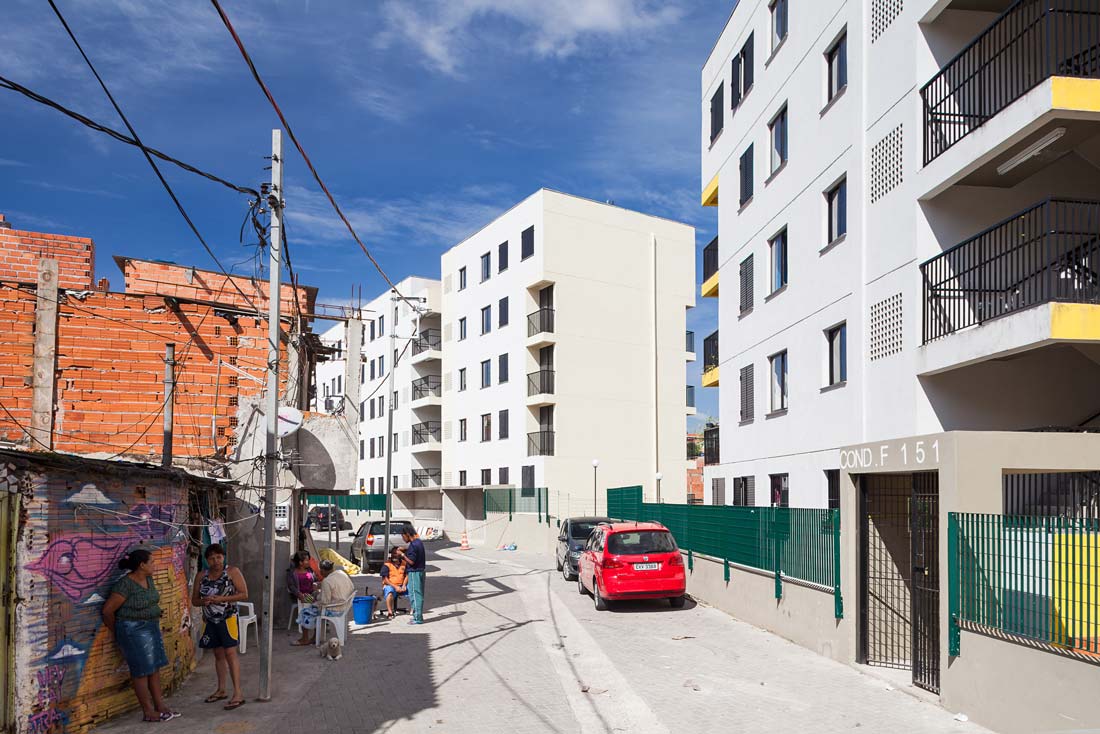 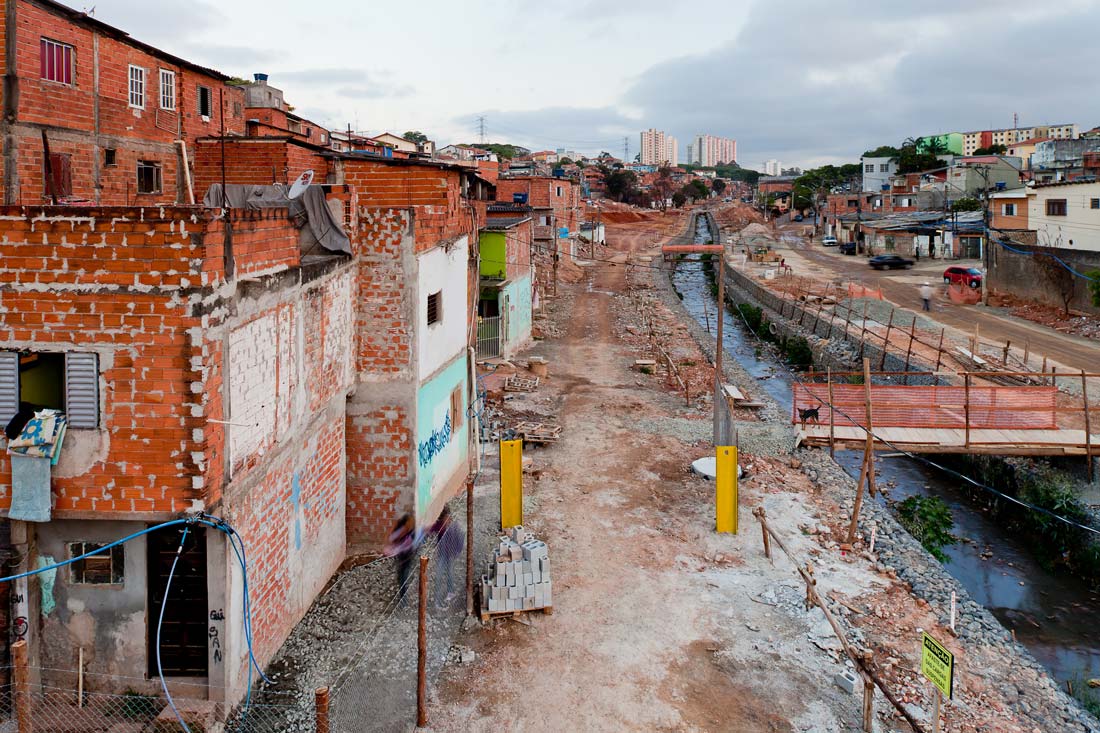 Owing to the slight slope along the path, we proposed to build a bike lane along the left bank that would be connected to the projected bike lane leading to Avenida Politécnica and the Butantã Public School. This would allow a longitudinal integration along the 1,800 meters of the promenade. Transversally, the project established two new roadways¸ improved pedestrian walkways and access to the remaining dwellings. Several bridges were built to allow easier crossing of the watercourse. All inner roads are shared, paved with interlocking concrete blocks and feature low curbs, much like the Dutch woonerf where pedestrian traffic is prioritized and car circulation is controlled through urban design and landscaping elements. 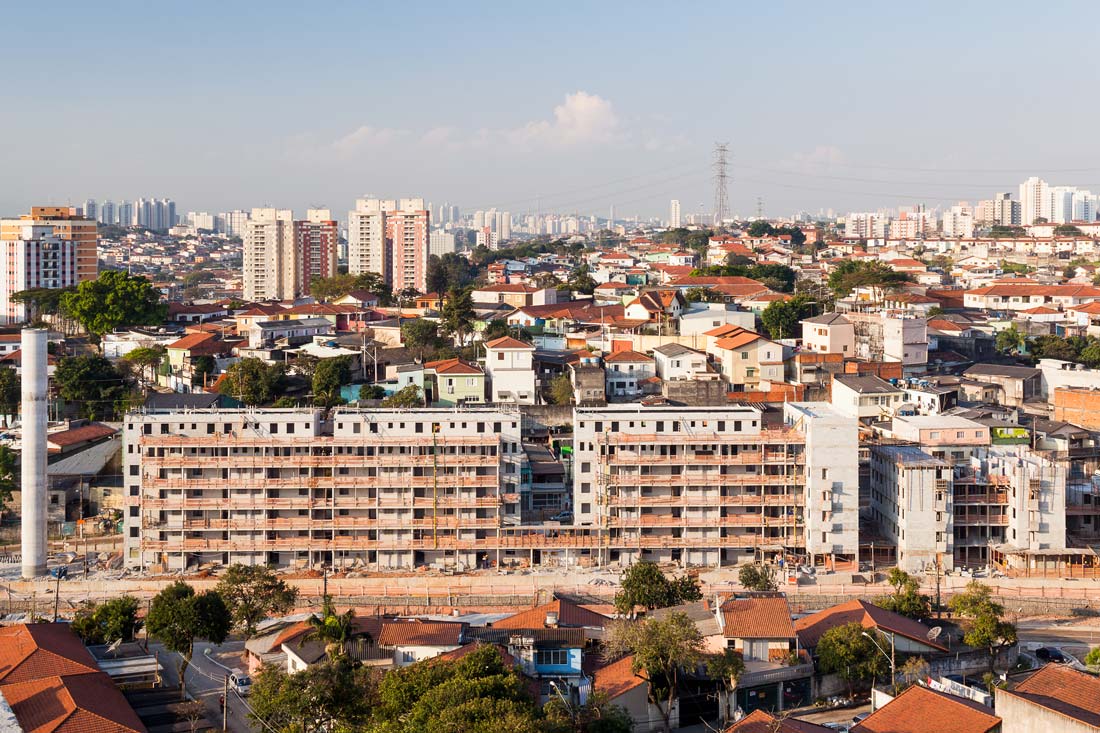 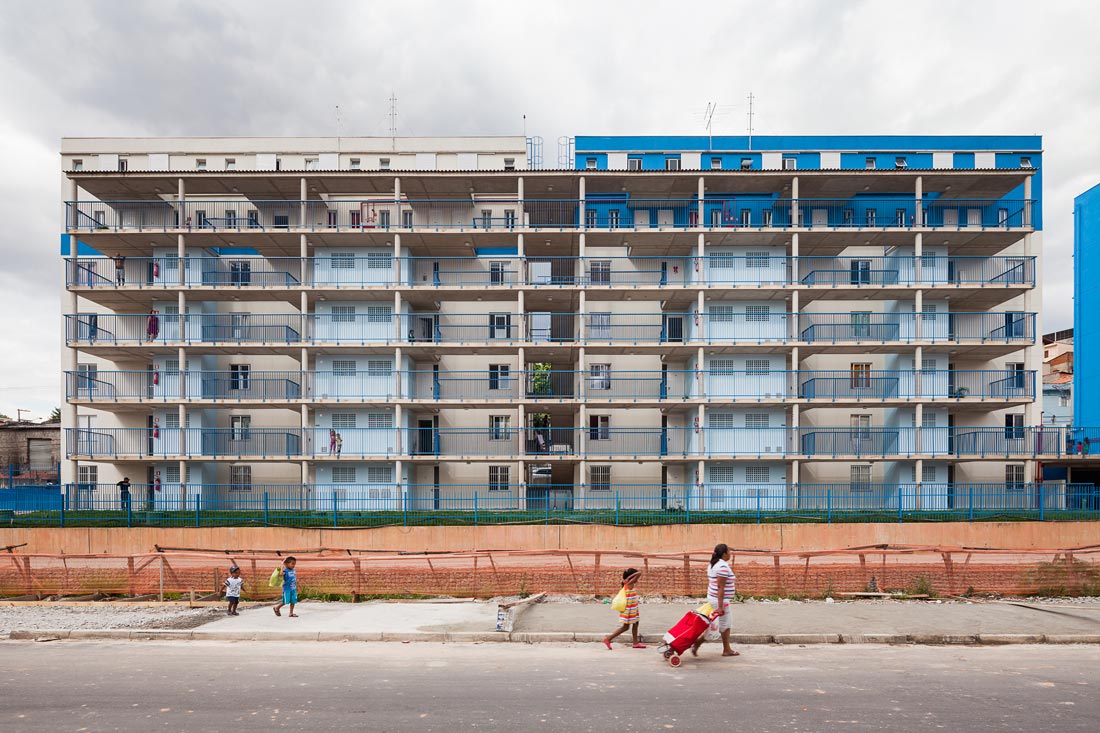 The project provides strong permeability among public, collective and private spaces. In places with steeper slopes and where retention was required, a low concrete parapet was built (up to 120cm high), thus introducing a physical element that provided articulation between spaces, without causing undue segregation and at the same time solving the retention problem. The cantilever wall retains the foundations of buildings alongside the riverbed and the green promenade, where gardens, staircases and ramps were inscribed in the urban design; at the same time, it outlines the boundaries for the new condominium buildings. All these urban design strategies and interventions at different levels helped to bring the concept of public spaces, mobility and recreation closer to the buildings, the pedestrian areas and to the small squares shaped by the infrastructure interventions. 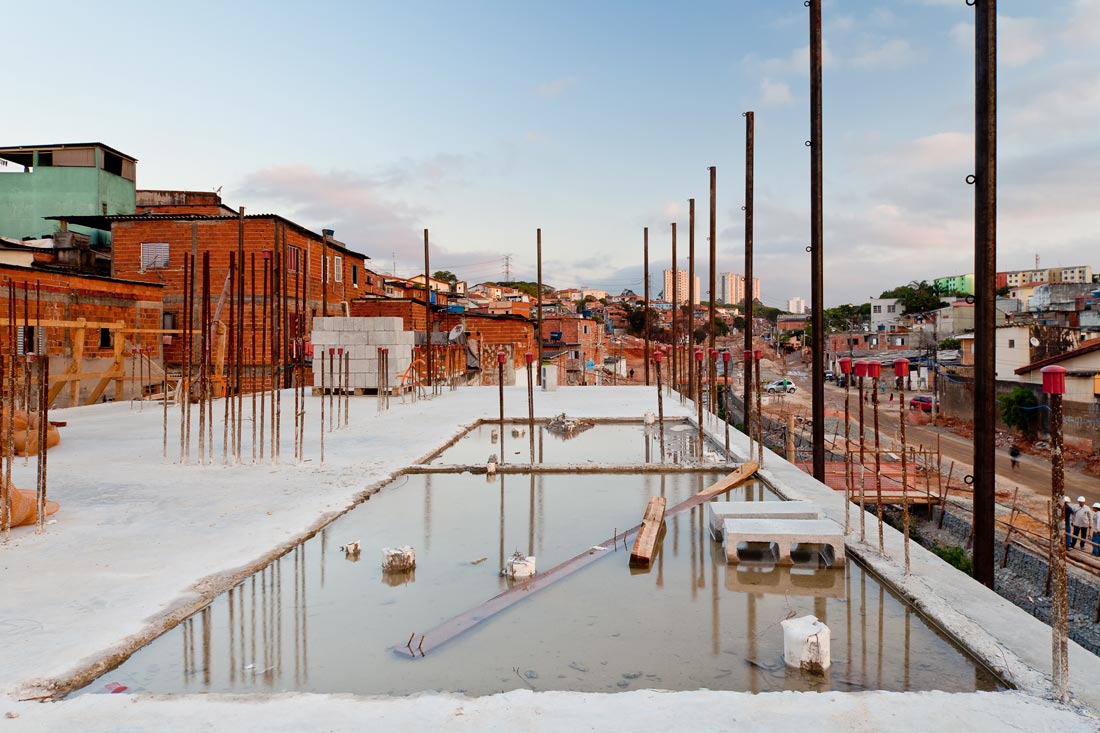 The preliminary social diagnosis highlighted the precarious economic situation of the population in the area. Urban action was therefore also aimed at tapping vocations and opportunities. To this effect, the urban project took into consideration the multiple uses of spaces and created areas along the green promenade so that uses related to services and the existing stores (as well as to the new recreational spaces and the bike lane) would be fully integrated and provide income opportunities and act as urban tools for physical and social integration. Even in the early periods of construction, it was possible to detect that merely in widening the sidewalks these opportunities naturally arise. 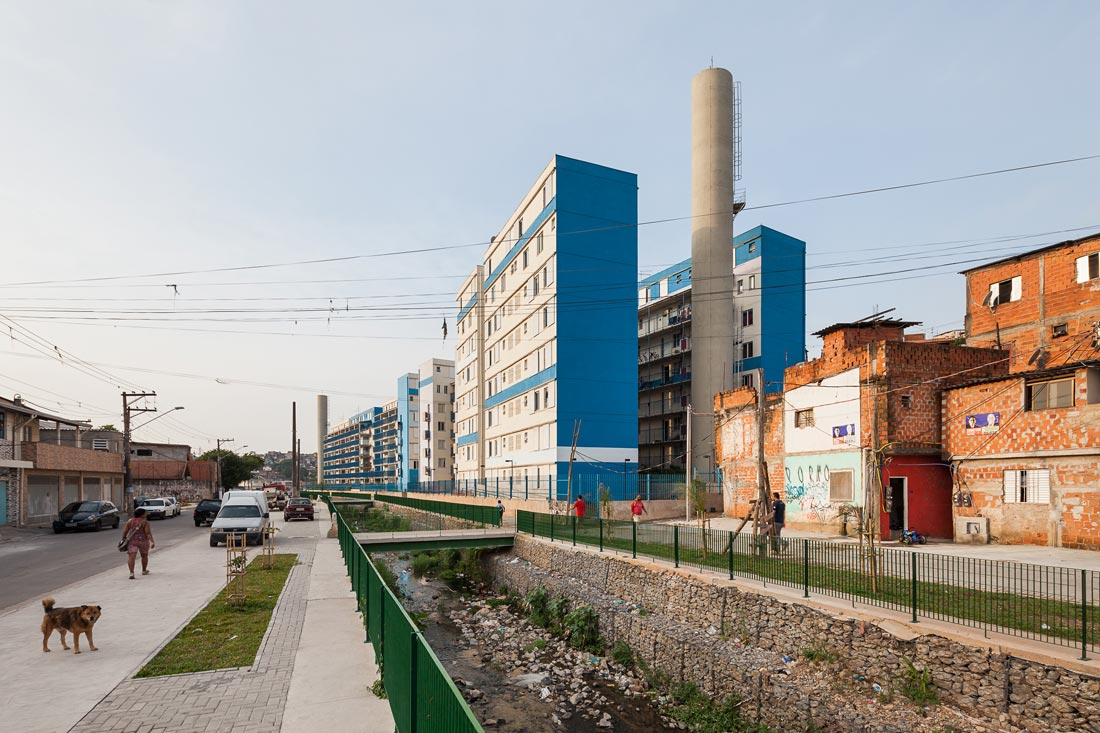 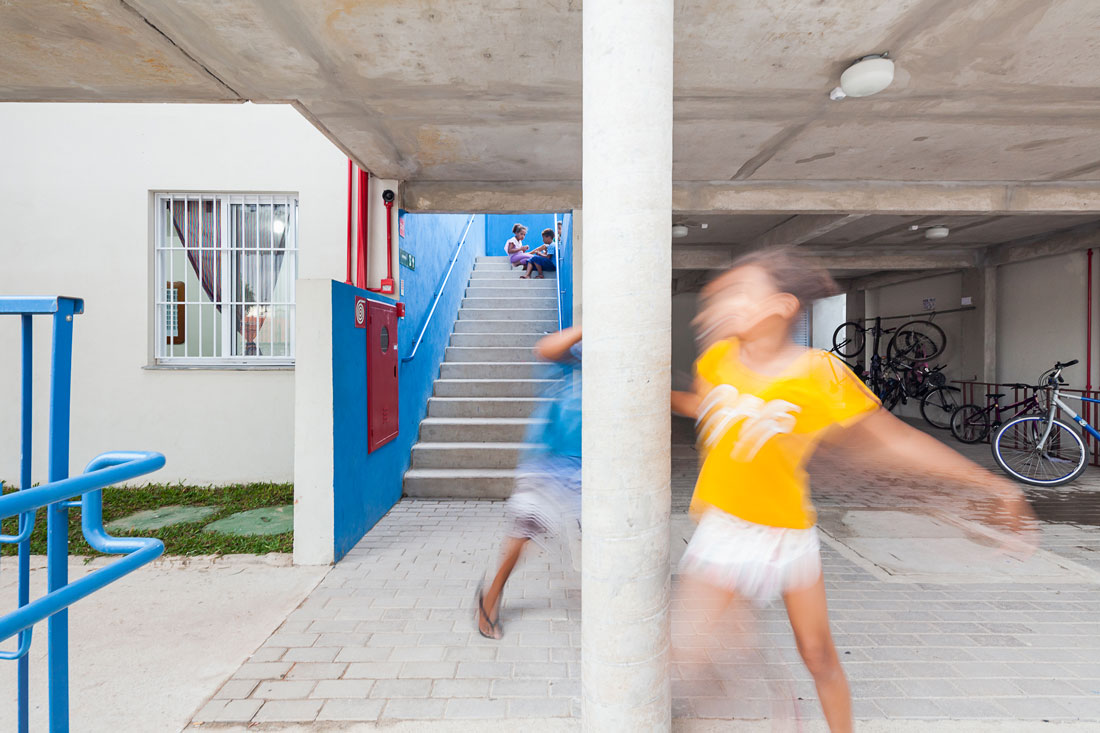 The architectural project for Sapé is grounded on the two following considerations:

Unit to building: the project envisages seven different types of housing units, besides commercial and services units. The number of each type was determined through the survey of families as the construction progressed. Shared collective porches for circulation allowed more conviviality in the walkways at ground level and created a space for social exchanges among families living on the same floor of the buildings.

City to building: the structural separation of buildings for horizontal circulation and vertical intervals, as well as definition of building volumes was of the essence to achieve flexibility in the implantation of buildings. Articulation between these elements generated an implantation that was adapted to each particular terrain, its relationship vis-à-vis the surroundings, and the situation of each lot in the landscape. By incorporating the landscape into the green promenade between each building, all spaces were integrated and helped to shape the transition between public and private areas. There was an ever-present concern to allow access to houses either at street level or via the green promenade. In order to adapt this concept to the actual topography, buildings were “poised” on the terrain, creating underground units directly connected to the green promenade. 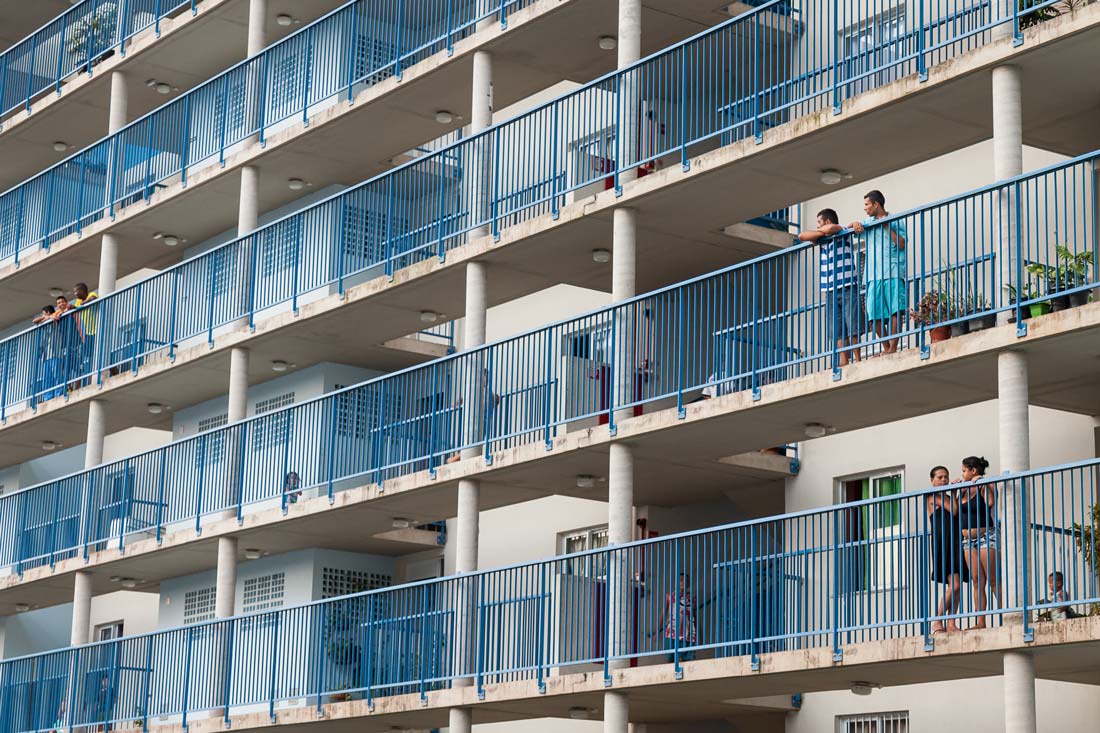 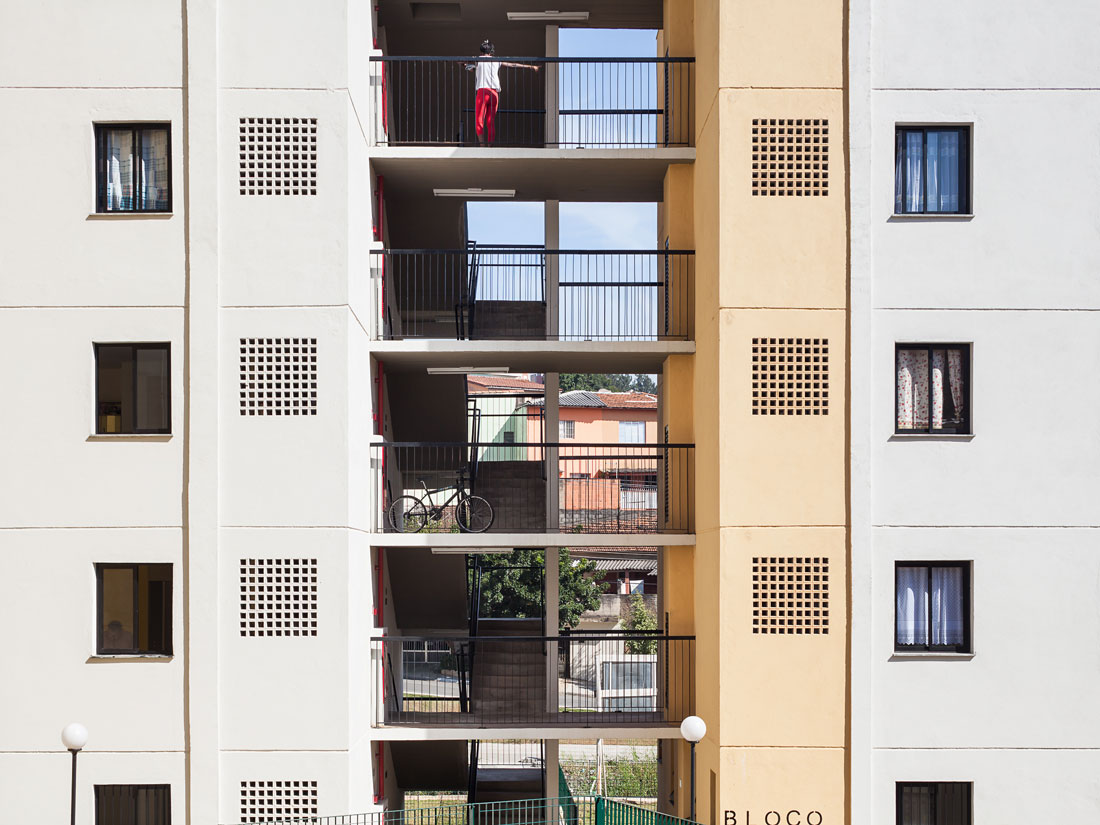 « Tadeo House: Harnessing the Site and its Resources
Mitrovicë-Mitrovica »