This project consists of building a path for pedestrians and cyclists to link Barcelona’s Avinguda Diagonal with Avinguda dels Països Catalans in Esplugues de Llobregat at one of the most challenging points in the metropolitan road network: the junction of the B-20 ring road and the B-23 expressway and the cloverleaf formed by the various links and accesses to the two cities. This road junction has been a barrier for pedestrians and cyclists for 60 years. The new cycling path now offers the most direct crossing possible, with a firm commitment towards soft, non-motorised mobility and to a biophilic city: healthier, less polluted and more accessible. 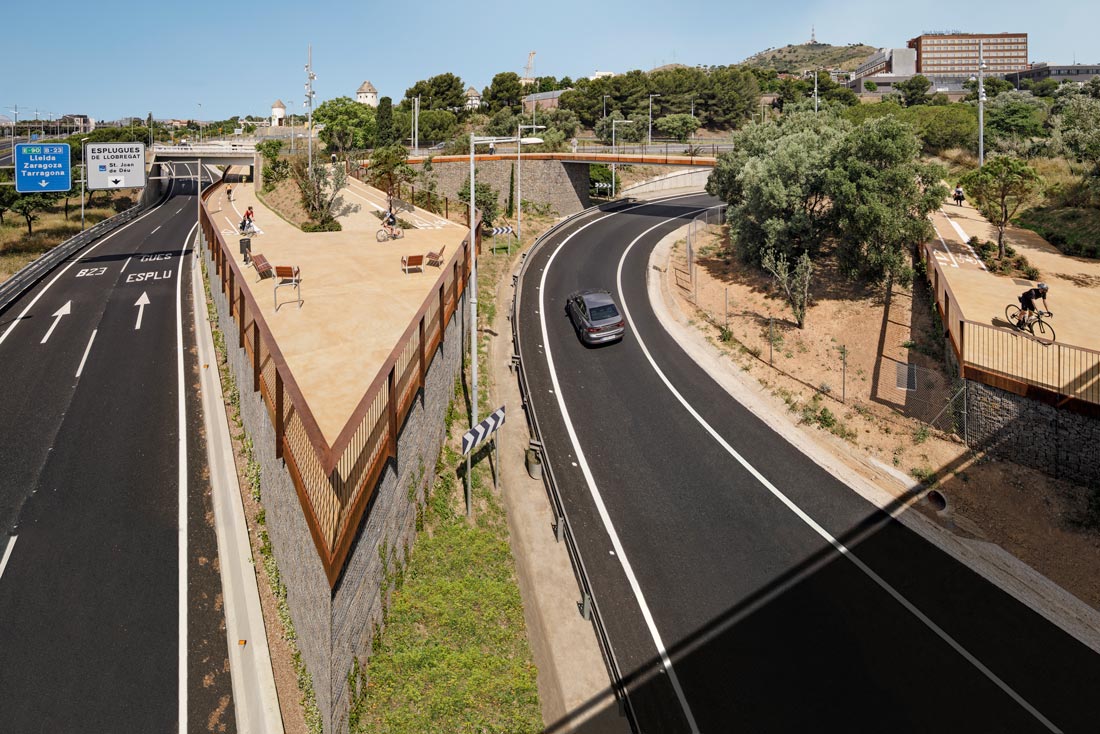 The new passage, which is 880 metres long, brings the two municipalities closer together by cutting almost 500 metres off the route, with a gently sloped layout ideal for cyclists and pedestrians, in a re-naturalised landscape that provides a vantage point over the city. The path also connects the urban network of cycling and pedestrian paths with the system of open spaces in Collserola Park by means of the Camí de les Aigües track through the Finestrelles neighbourhood, one of the shortest and gentlest slopes in the city.

The new cycling path, a green corridor with pacified traffic, is a very charming and extraordinary space. Used for practical and recreational reasons alike, it is reminiscent of country lanes beyond the city limits and major road infrastructures, transforming a forgotten and neglected space into a meeting place and a source of urban continuity for the metropolitan community. 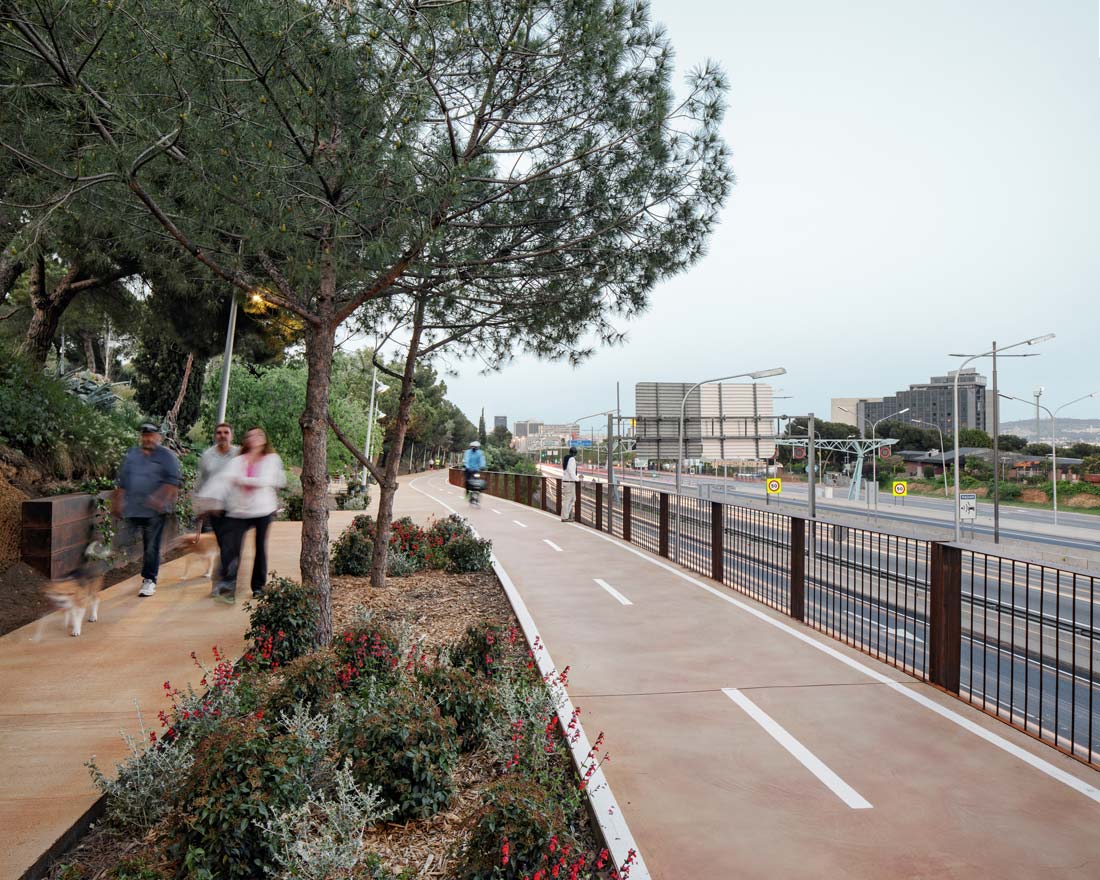 The connection between the cities of Barcelona and Esplugues de Llobregat has historically relied on the construction of large infrastructures for vehicular use, negatively impacting the pedestrian and bicycle routes between the two cities. Road infrastructure such as the B-23 expressway and the B-20 ring road (Ronda de Dalt) have formed barriers for more than 50 years. This leaves unused routes that are more than a kilometre and a half in length, with sidewalks that are not fully accessible and have steep slopes, as the only alternative. 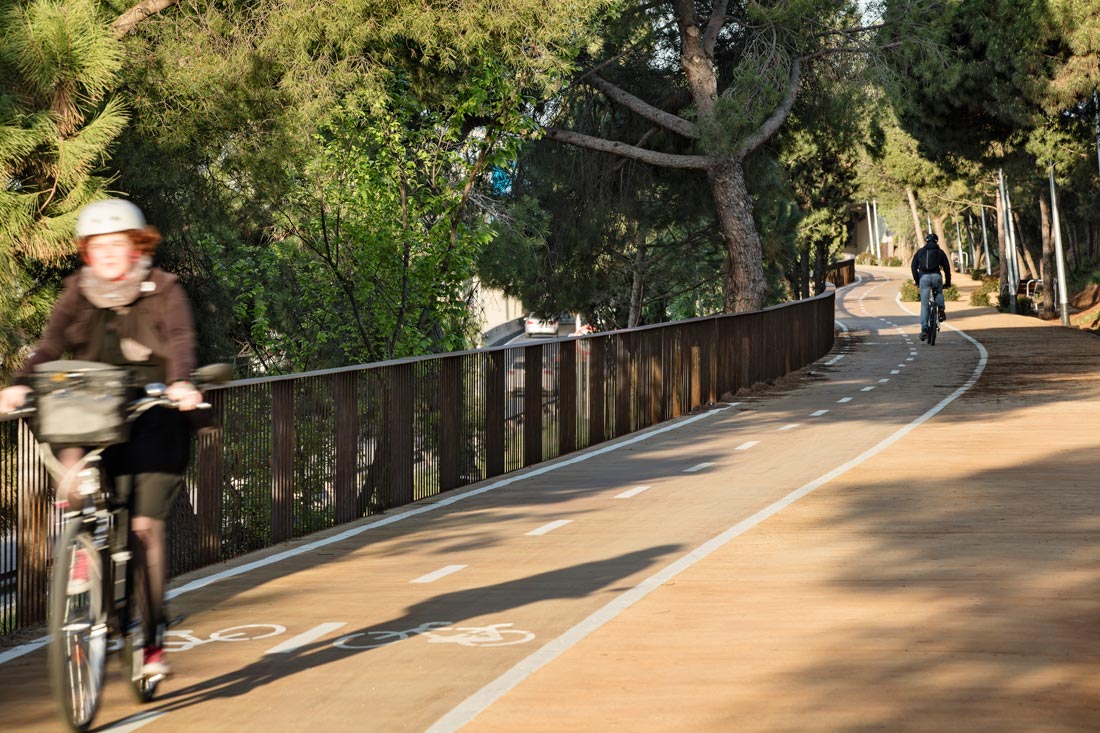 The new path for pedestrians and bicycles has made it possible to shorten the distance between the two cities by almost half a kilometre, guaranteeing gentle slopes of less than 6%, which significantly improves accessibility throughout their journey. Its layout intentionally runs through the green areas on the margins of the larger road infrastructures and incorporates shrubbery and climbing vegetation. This makes the route pleasantly scenic and also relates the urban network of bike lanes and pedestrian paths to the system of open spaces in the city and the Collserola Natural Park. The route is a new green corridor that reduces the landscape impact of the road junction and restores the residual spaces to form a walkway for people’s enjoyment, with a sinuous and gentle transition between the different levels of large infrastructures, ultimately achieving a renaturalised environment.

« The Foundations of the Future Urban Legacy Lab
Xiamen Bicycle Skyway: Bringing Biking Back to the People »