Concealed between the soft lines of its rural surroundings, this singular housing is an example of how to design sustainably while giving priority to the landscape. 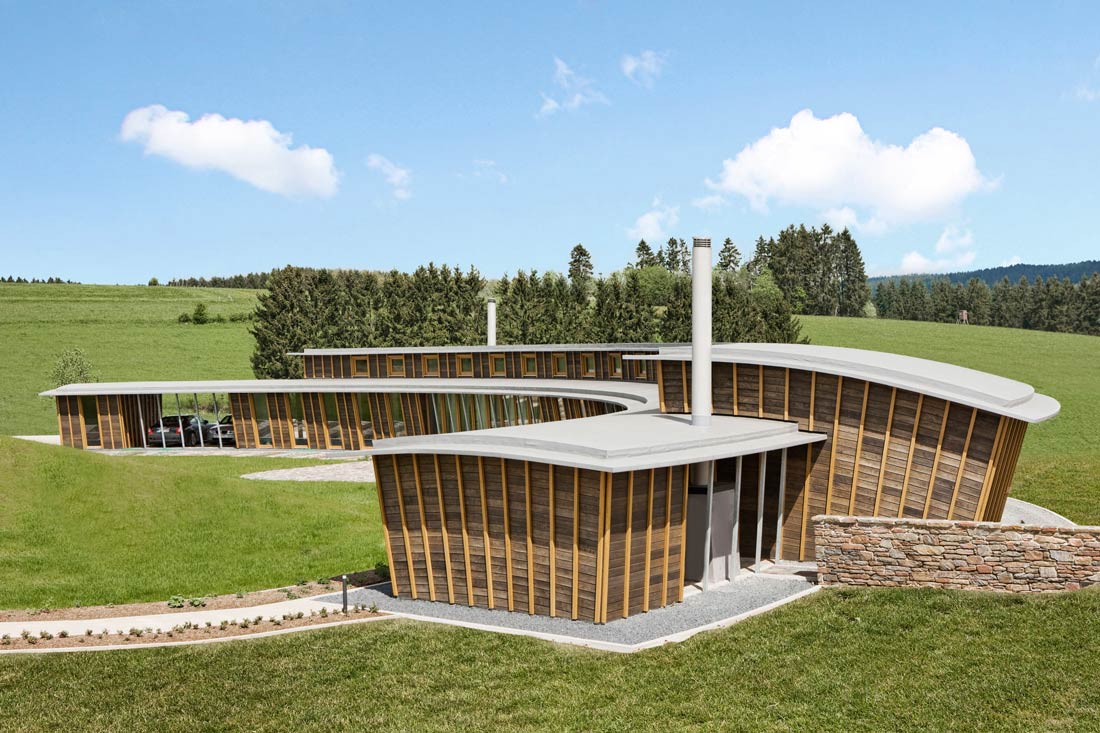 The land is situated close to a small village in the East Cantons. It runs at a steep gradient into a small valley enclosed by a wooded slope in the distance. The view is spectacular, showcasing a rural landscape. The visual and ecological quality of the site must be preserved and developed as far as possible.

The aim is to build a house that is environmentally friendly in the broad sense of the term. The architectural intention, in particular, is to integrate the house in the best way possible, not only into the landscape – with minimum visual impact – but also into the rural and local environment. 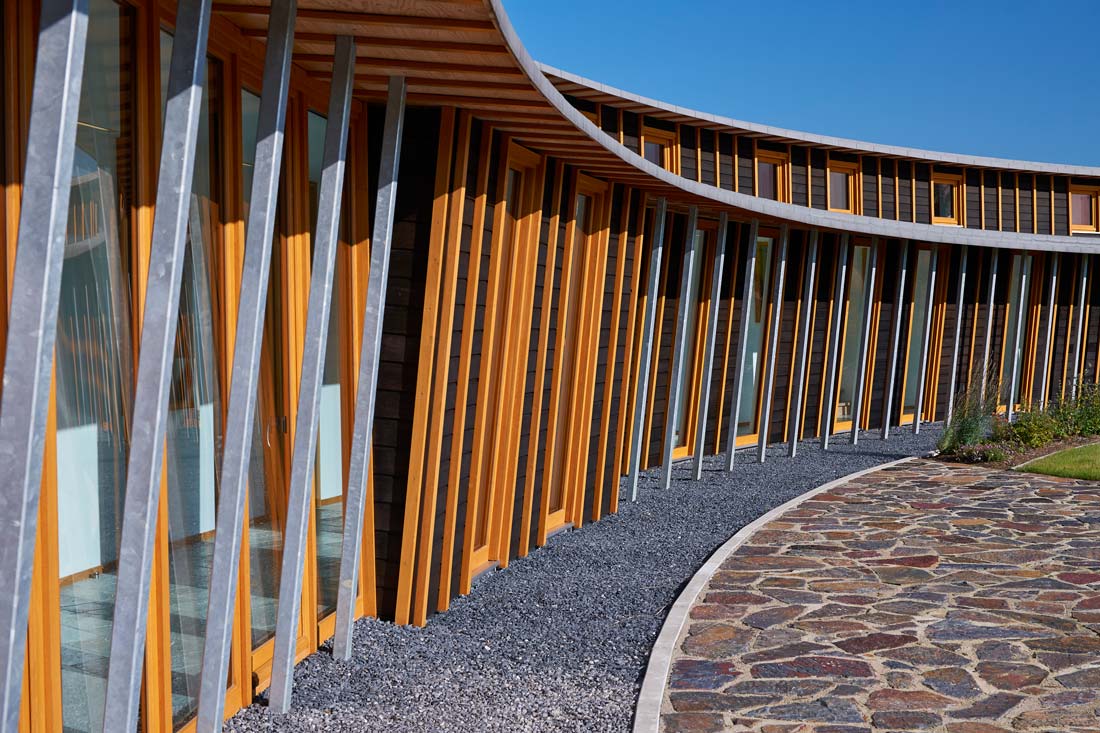 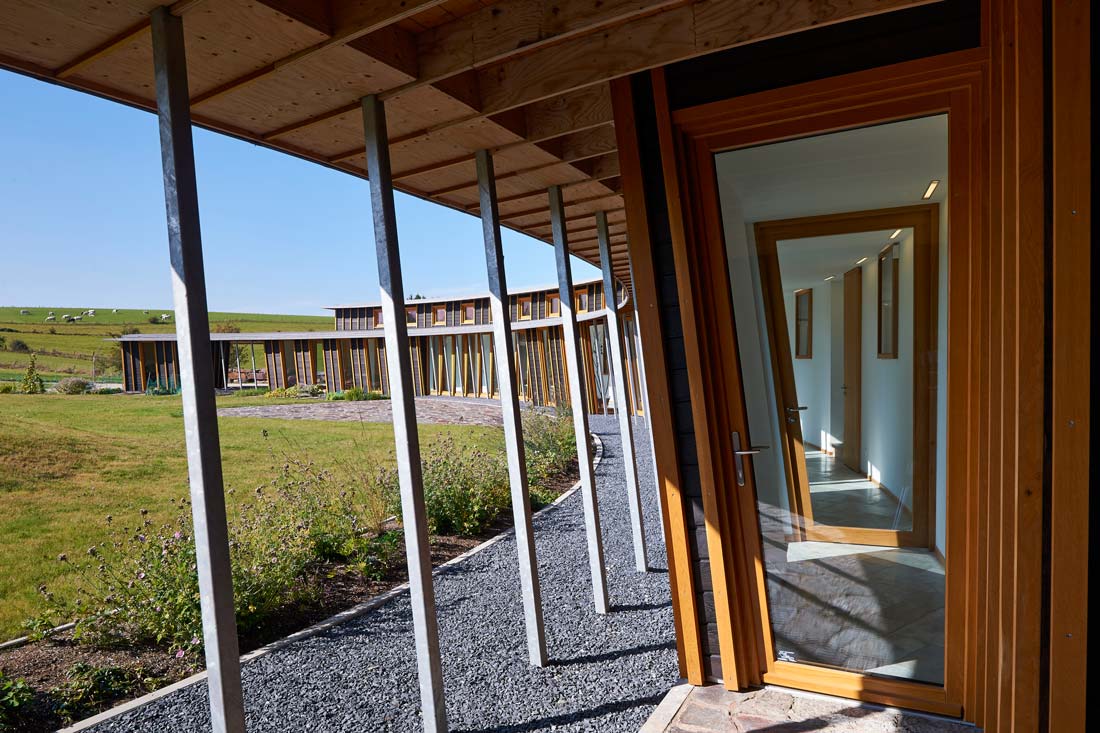 The single-storey house is built at the back of the lot. From its position on the slope, it blends in with the landscape. Indeed, the top of the property is almost three metres below the communal path, meaning that the view for walkers and existing or future neighbours is not obstructed by the house.

The garden is in the style of a farm with an orchard and a vegetable garden, positioned on the edge of a field at the end of an access road. It is circular, making it highly space efficient. The access road joins the curve of the pergola which encircles the garden and is lined with a row of native trees, providing a visual link between the house and the public domain. The entrance to the access road, marked by three walnut trees, is set back in order to be close to the centre of the hamlet. 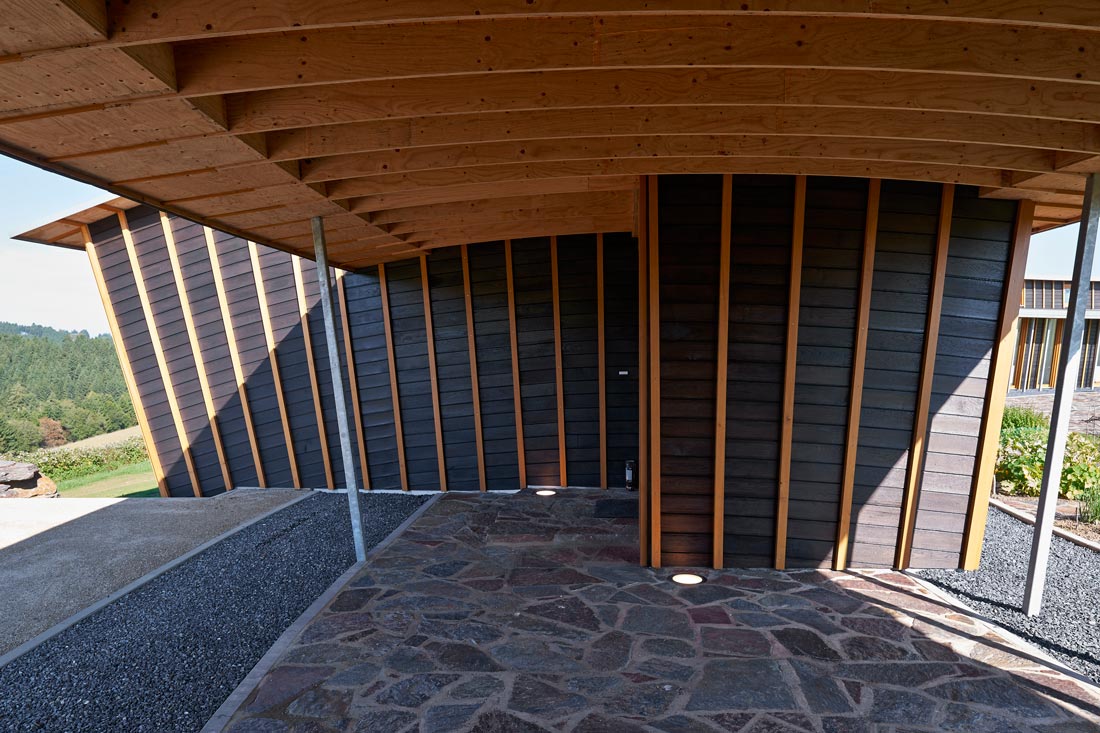 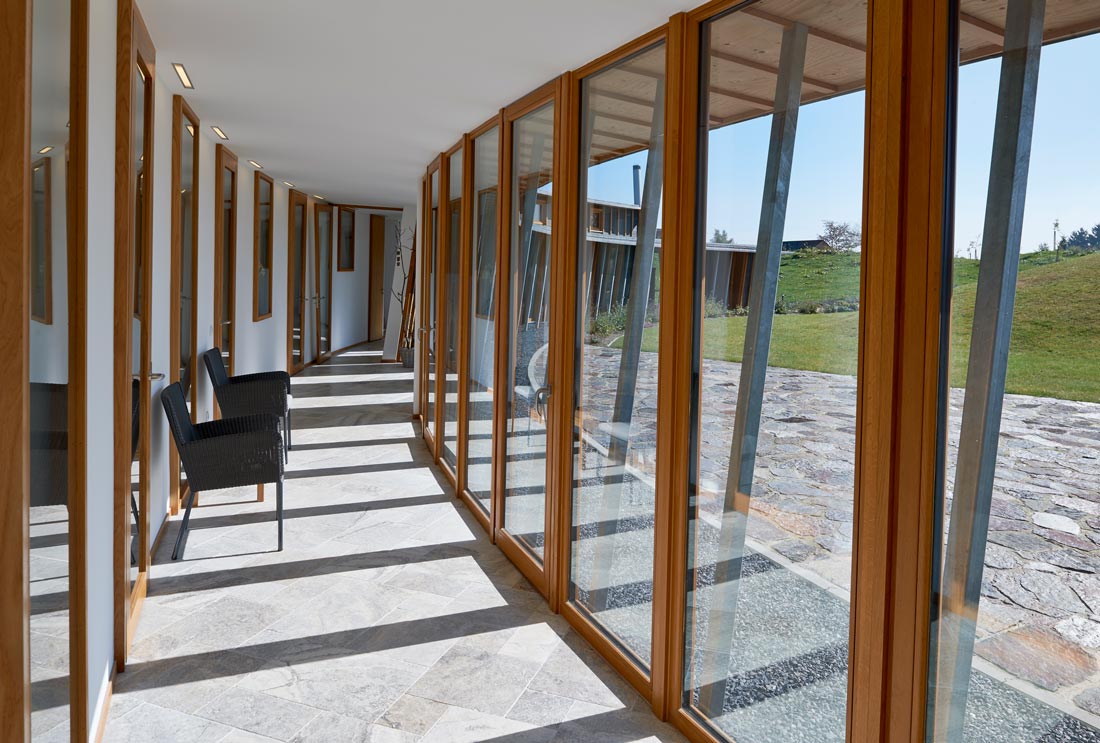 The house extends around the circle of the garden. The curve provides residents with panoramic views to the north, over the valley.

To the south, the house closes into a more private terrace that is protected from the wind and extended by the garden. The house is formed by the main building which is extended by two roofs. These roofs act on one side as a carport and on the other side as a covered terrace.

The main building is formed from two parallel arches. To the south, a glazed gallery is protected by eaves. Unheated, it serves as both the hallway to the different rooms in the house and as thermal buffering for the north part of the house. The north part is formed from a building with substantial thermal insulation, containing the living rooms with exceptional views to the north.

The rooms are laid out from west to east – from public to private. The entrance, the office, the “Bierkeller”, the living room, the dining room and the kitchen open onto the largest area of the gallery. An airlock separates the public areas from the more private area, which contains the bedrooms and a “thermal” area (hammam and shower) located at the east end of the house. The house is completed by an outdoor spa bath with views over the landscape. The eye glides over the rounded roof, preventing any clash with the landscape. 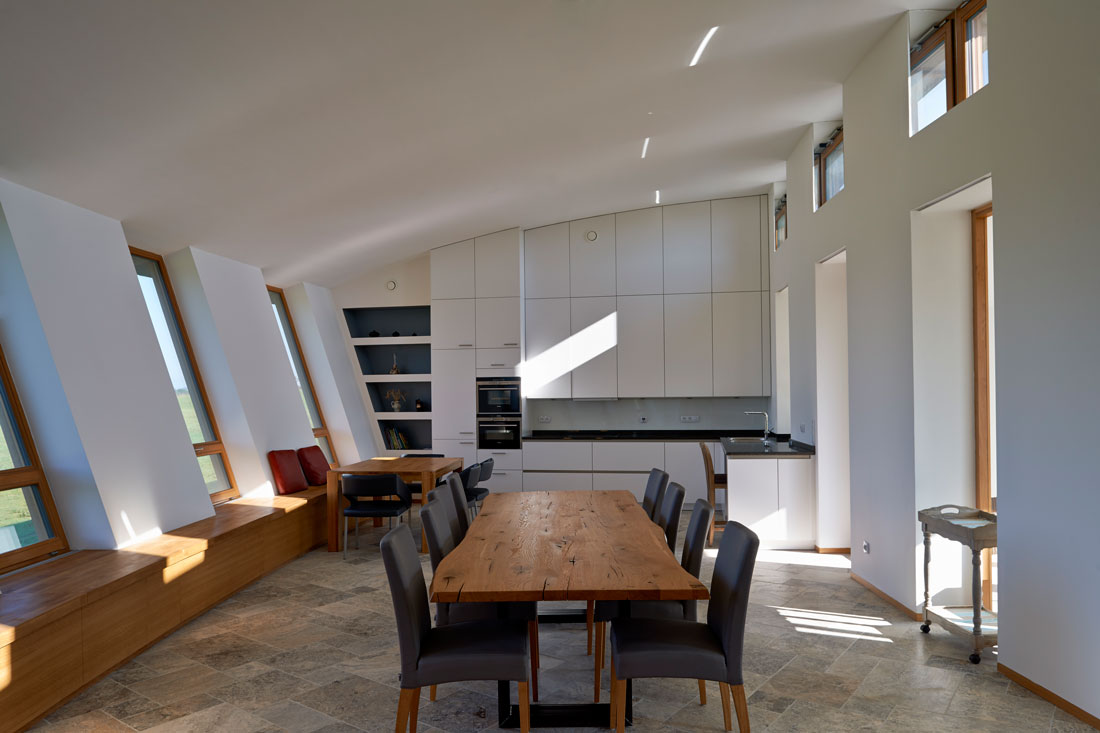 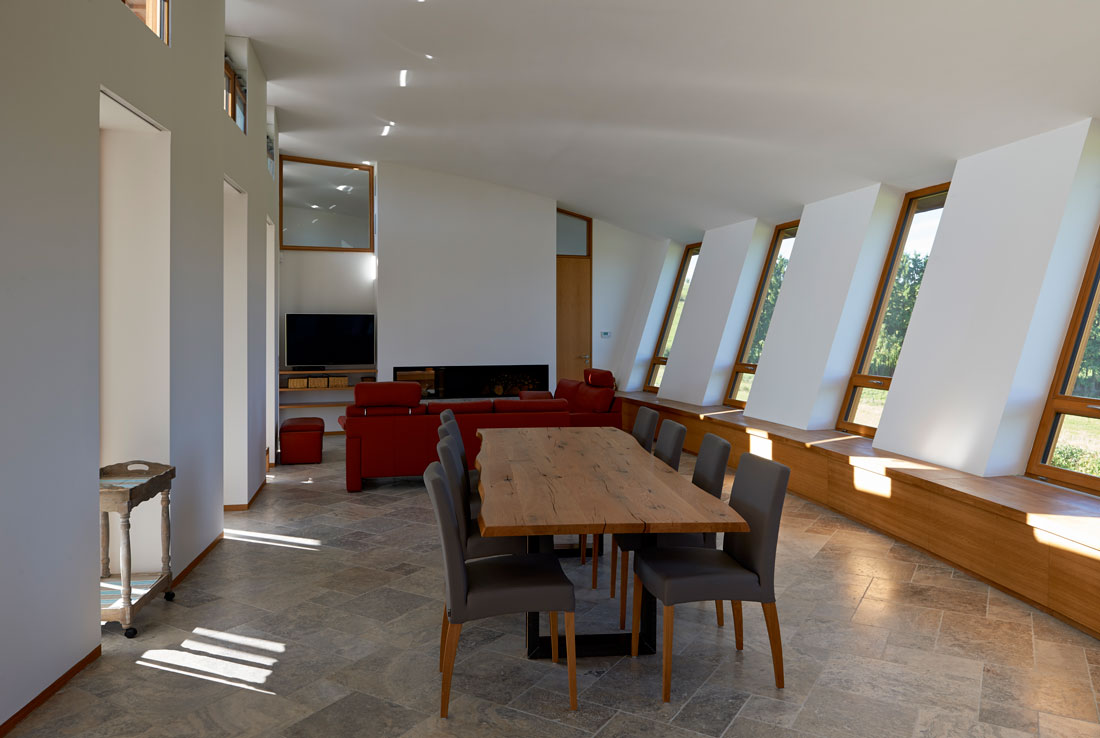 The aim for the house is an energy performance in line with the passive standard: high-performance insulation, air tightness, controlled mechanical ventilation with heat recovery, rainwater recovery and the use of renewable energy sources.

The structure, the façades and the external joinery are formed from wood, the curved roof is coated with a grey membrane. 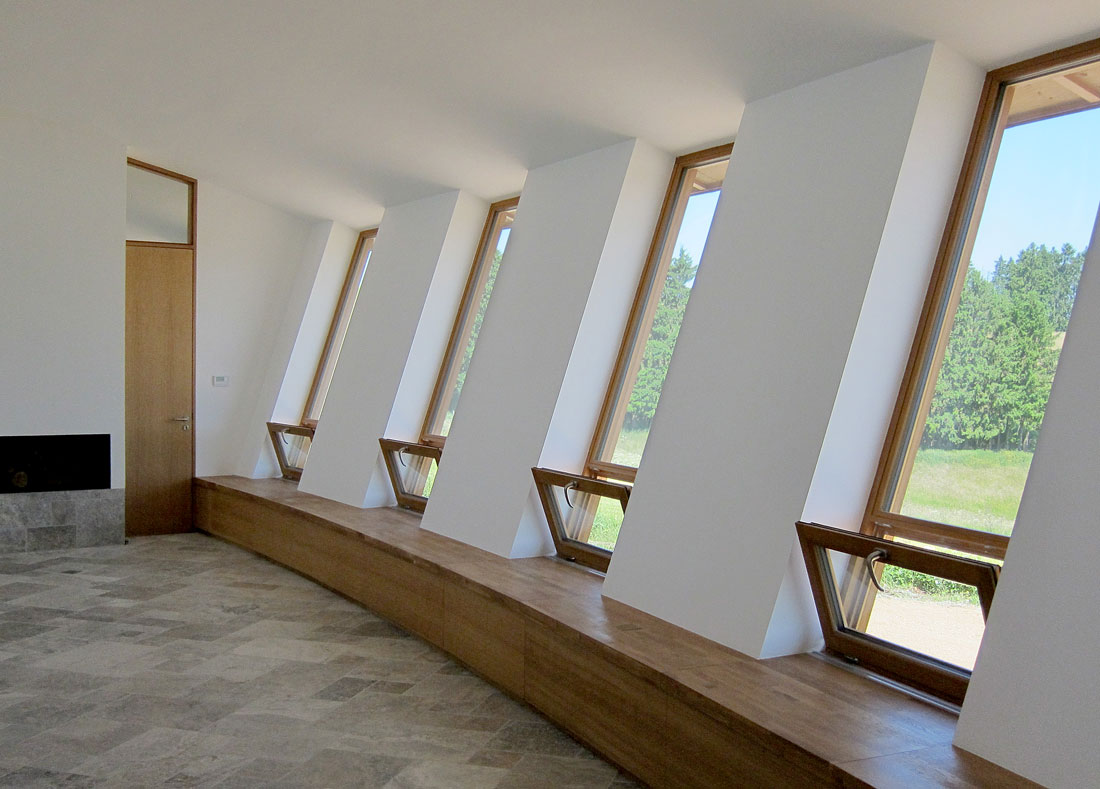 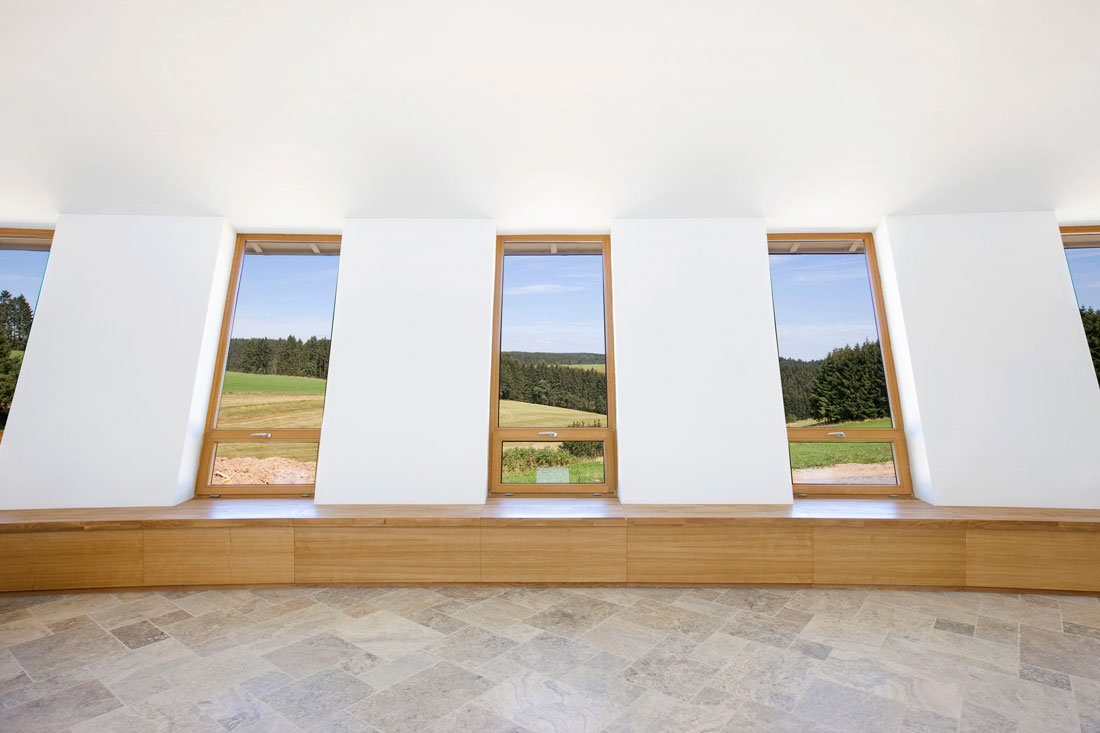