After the salt field’s bankrupt and its consequent disuse, this project gave to the site a second bloom. It multiplied the habitat conditions and transformed the salt fields into a sanctuary for the animals and a liquid landscape for the tourists. 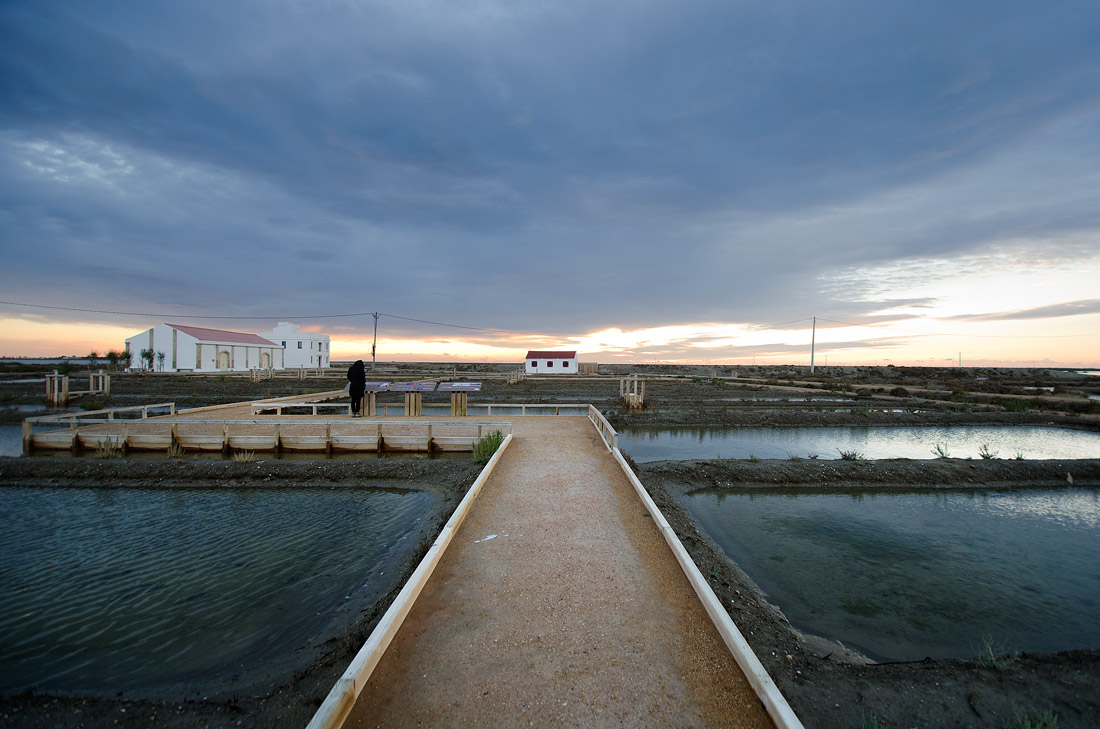 The ‘La Tancada’ project site is located at the southern tip of the delta formed by the Ebre River, the Iberian Peninsula’s most important river. The delta is a crucial stop along bird migration routes through Western Europe. Over the last century, the site has undergone numerous transformations. Originally, it was a salty intertidal lagoon. At the beginning of the 20th century, it was transformed into productive salt fields. In the 1980s it was turned into a sh far. The business subsequently collapsed and the site became the property of Catalunya Caixa Bank. 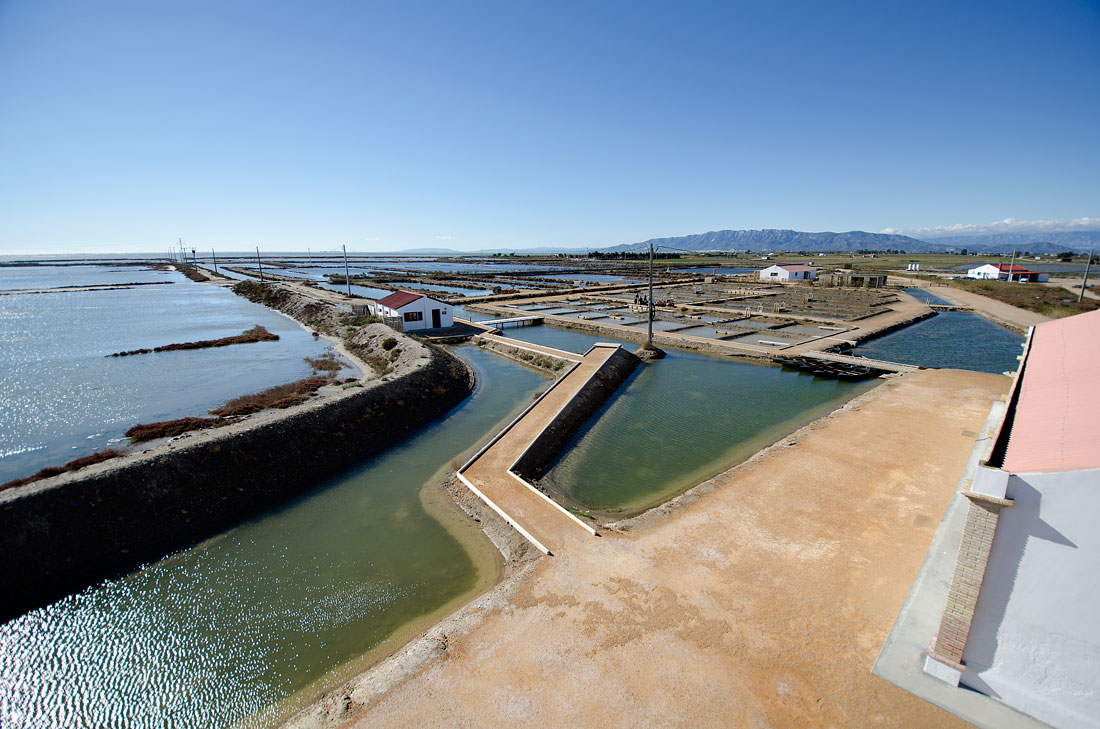 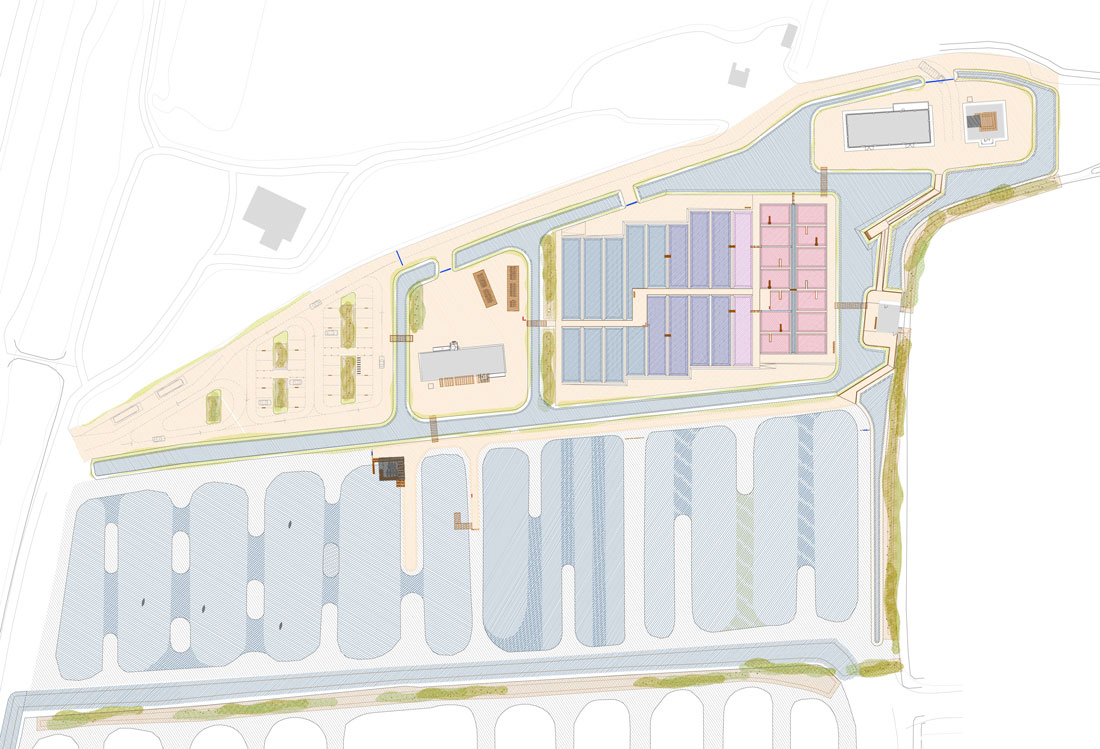 In 2009, the Catalunya Caixa Bank nature foundation + the Spanish Ministry of the Environment + Delta de l’Ebre Natural Park + IRTA (Institute of Agricultural Research) succeeded in getting funding from the EU LIFE program to restore this site and other nearby natural areas. 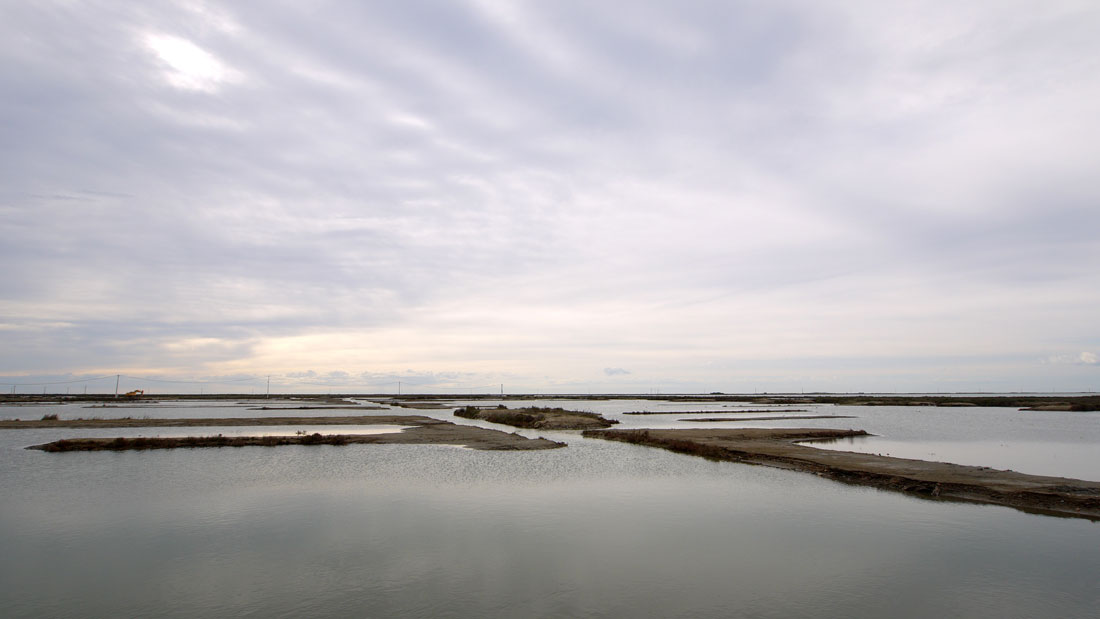 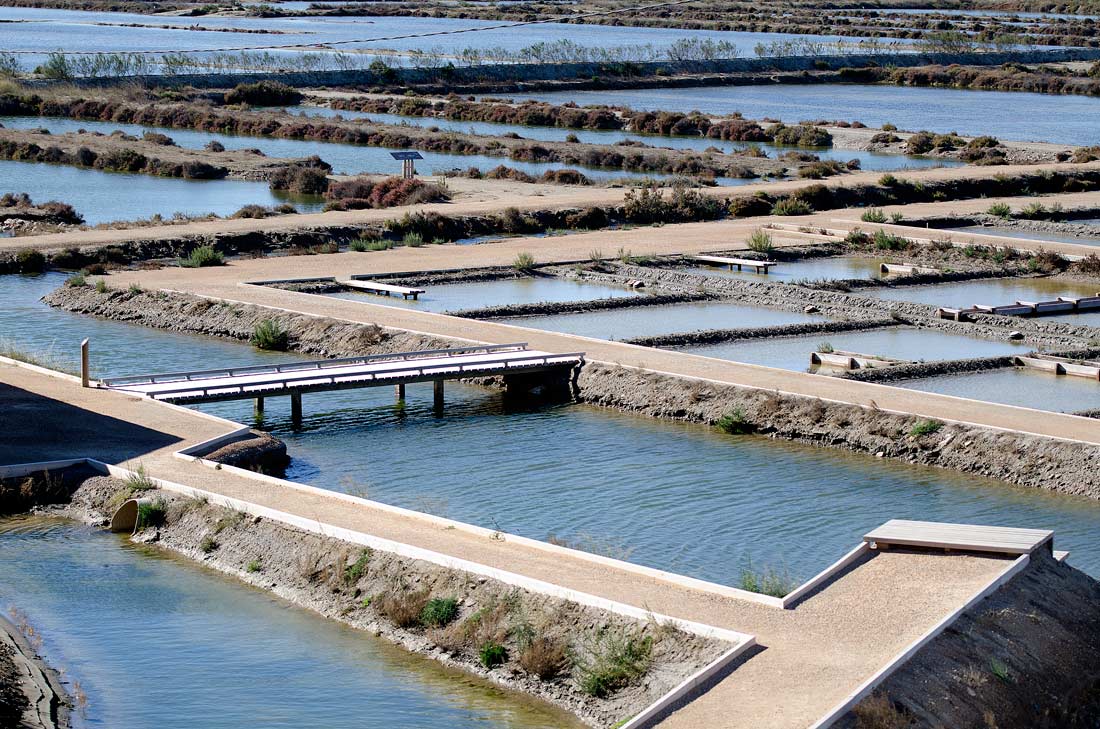 The scientists in charge of the mission highlighted the need to diversify the land-water ecotone in order to multiply habitat conditions. Thus, by redistributing the sand of the dikes, the project implements four distinct cross-section types with diverse lagoon depths, regimes of flooding and slopes.

The Delta Lagoon life project aims to provide a habitat for targeted protected fauna and flora species: for example, the Aphanius iberis, among the EU’s most endangered species, has a sanctuary in this artificially created habitat.

Mediterranean salt steppes with Limonium; there are three EU-listed species found on the site
Feeding and nesting island for populations of waders & terns
Feeding habitat for Flamingo

The concept for the interpretation centre was to transform the extremely exposed existing esplanade into a liquid landscape, built as an archipelago of four islands/peninsulas containing and sequencing the proposed interpretative program. Since the water table was only 50 cm below the surface, this was an extremely effective and low-cost tactic to organize visits and to create some drama when crossing to the islands, as well as substituting fencing with water canals. Above all, it celebrates the salty liquid landscape and sets up a magnificent interplay with the light cycle. 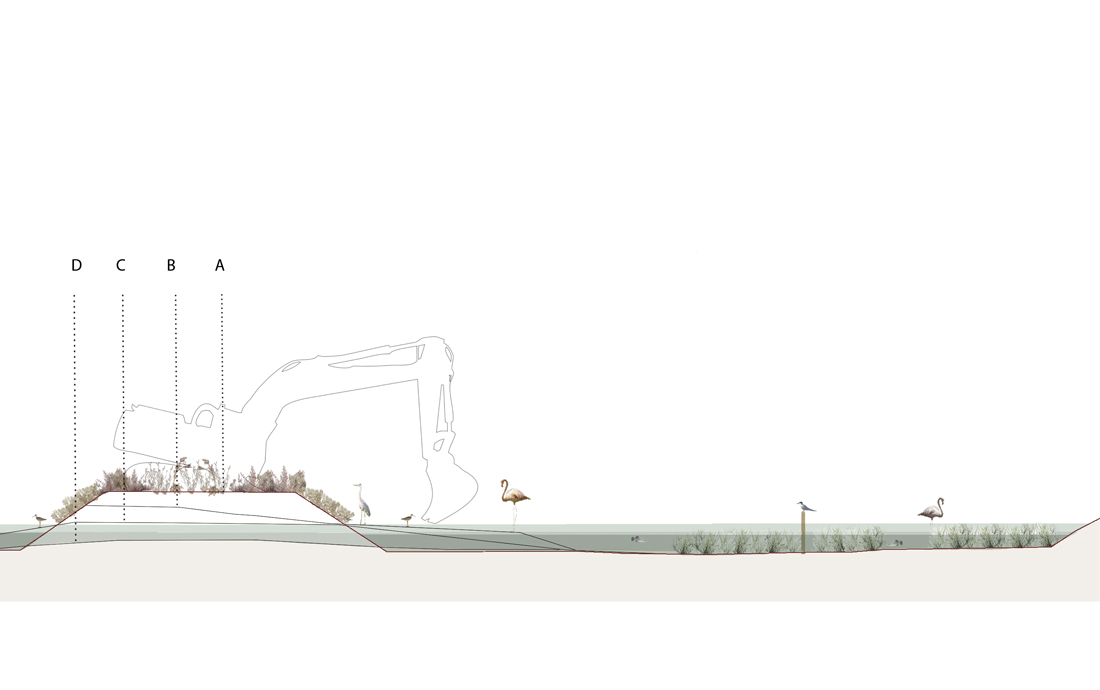 Through necessarily low-cost actions, the design skilfully constructs a hybrid of nature and culture that celebrates the site’s characteristics, both in terms of a manmade performative ecosystem for endangered species and as an attractive landscape for tourism. It proposes ways to choreograph on-site visits through a narrative that invites visitors to explore what is unique to this peculiar landscape: intertidal lagoons, salt fields and crystallisations, flamingos, terns, etc. 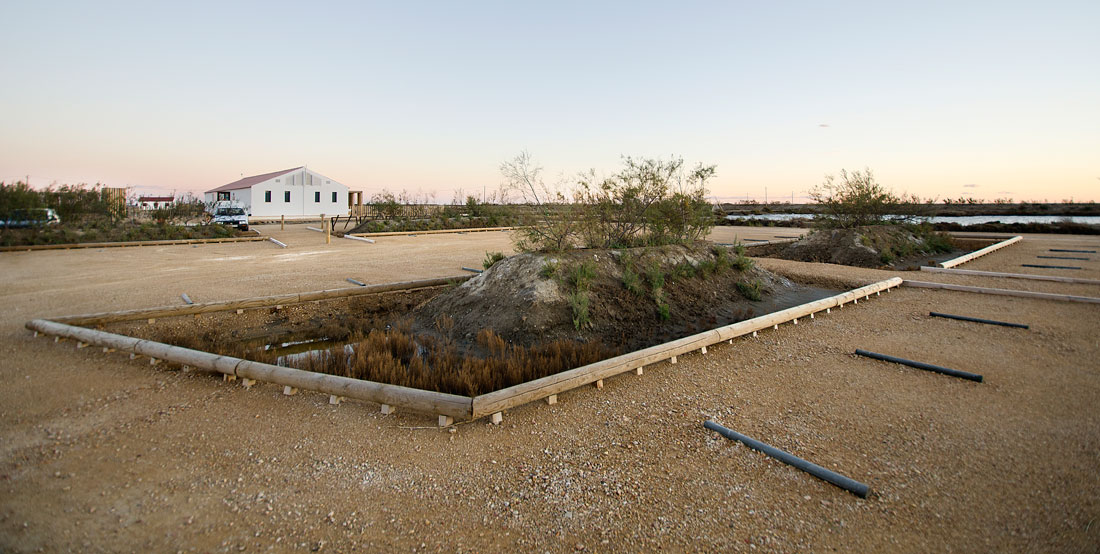 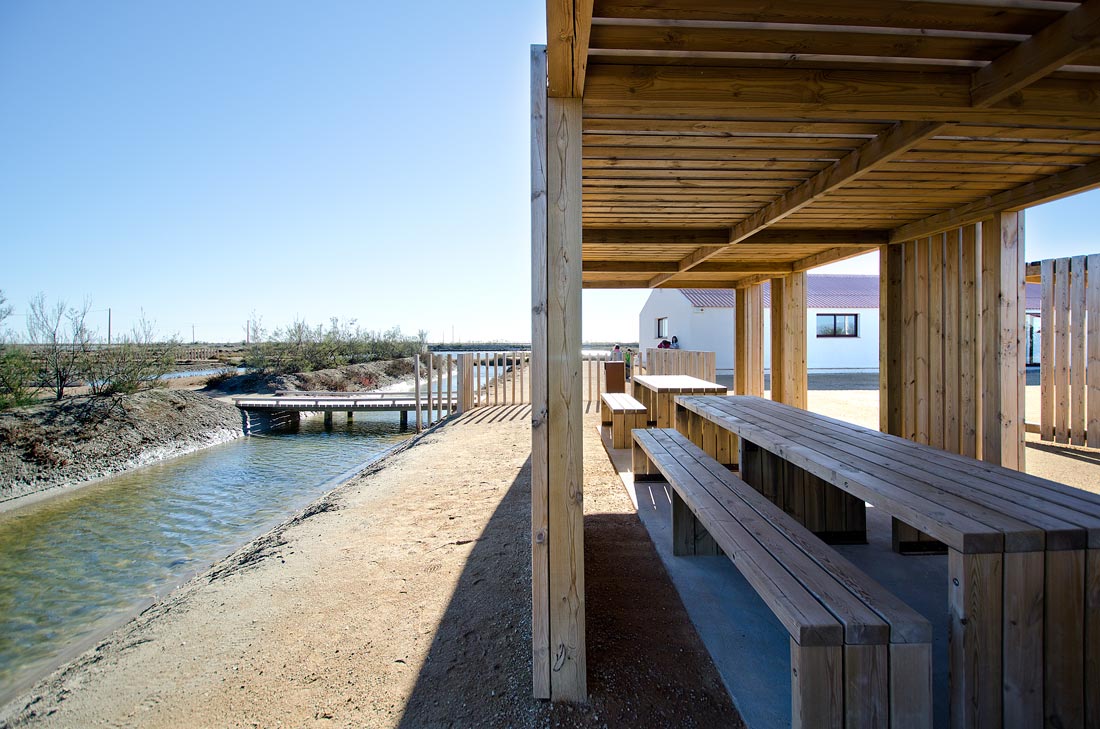 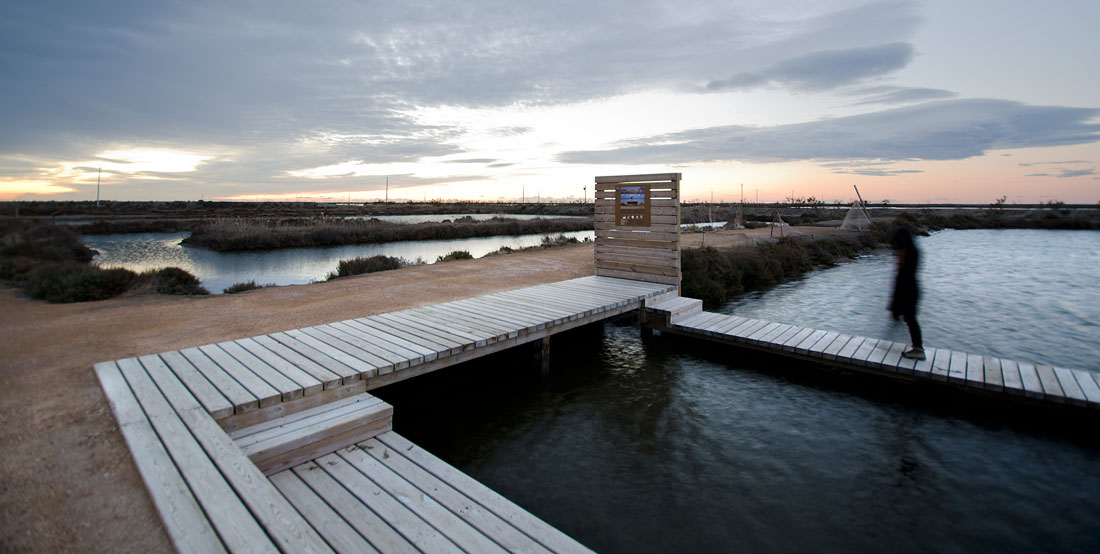 « Solana Ulcinj: an Habitat for a Thousand Species
FXCollaborative »