The architecture of Southern California has exemplified the advantages of its benign yet adventurous environment. From the spread-eaved bungalows garlanded with sleeping decks, to the post-war Case Study homes with their walls of glass and economical post-and-beam construction, the buildings of Southern California have matched available technology and environmental bounty with grace and efficiency. Until recently, that is. The once private frontier is now over-occupied with the suburban McMansion—replete with its supersized cost as well as its material and spatial excessiveness. Today’s homebuyers have shifted their focus from delight to investment, and space is counted rather than appreciated. 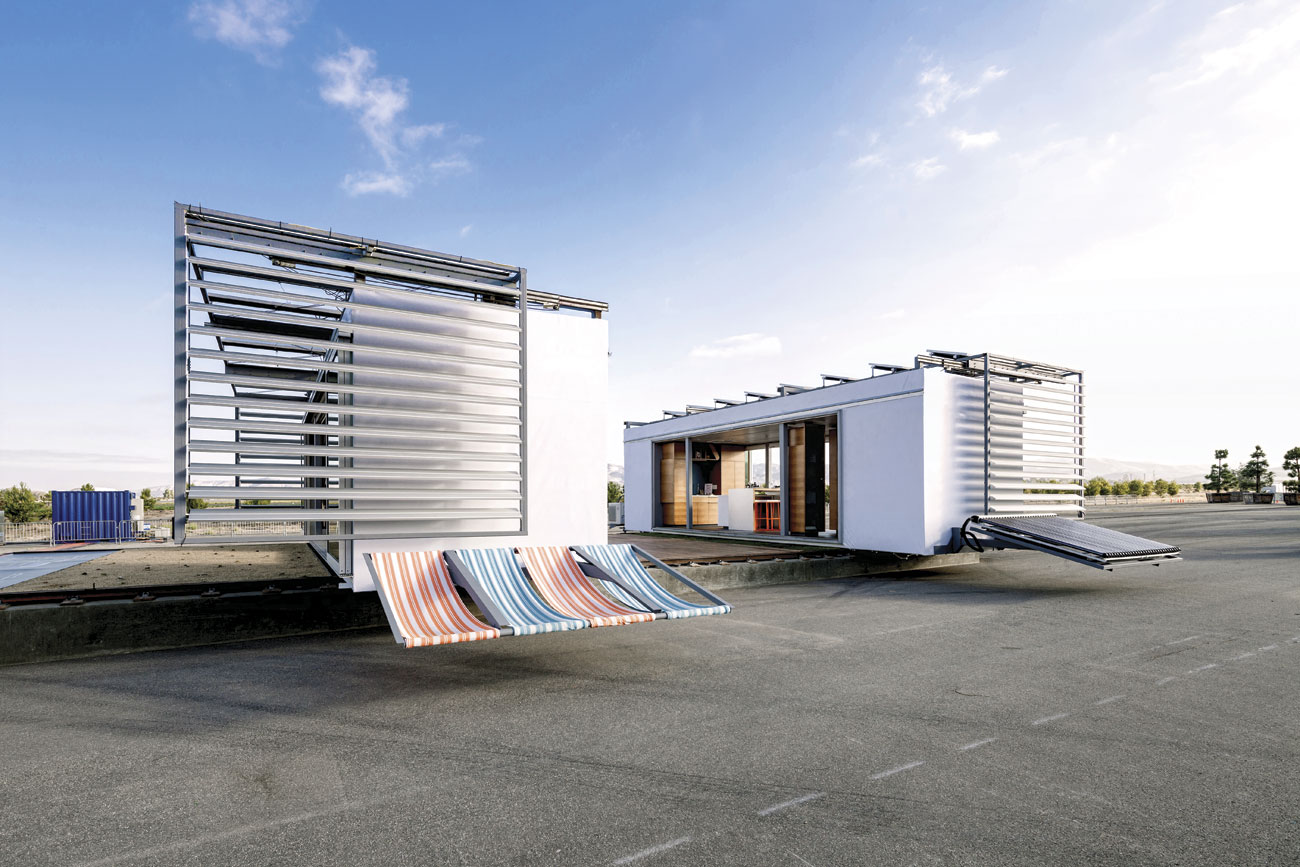 Within this context, DALE, the Dynamic Augmented Living Environment, is a small-footprint dwelling prototype that attempts to reclaim the spirit of Southern California by embracing its sublime climate and active lifestyle while still “living large.” Using the sun’s unlimited supply of energy along with the latest generation of solar technology, DALE is a house that shape shifts to amplify its occupants’ living needs. It looks beyond “sustainability” toward thrivability—making it a dwelling that can be actively enjoyed. At a minimal 600 sq. ft., DALE expands: it is comprised of two movable, prefabricated modules that, at the push of a button, open up to allow the outdoors to become integrated into the house—creating an in-between yard and tripling its inhabitable square footage. 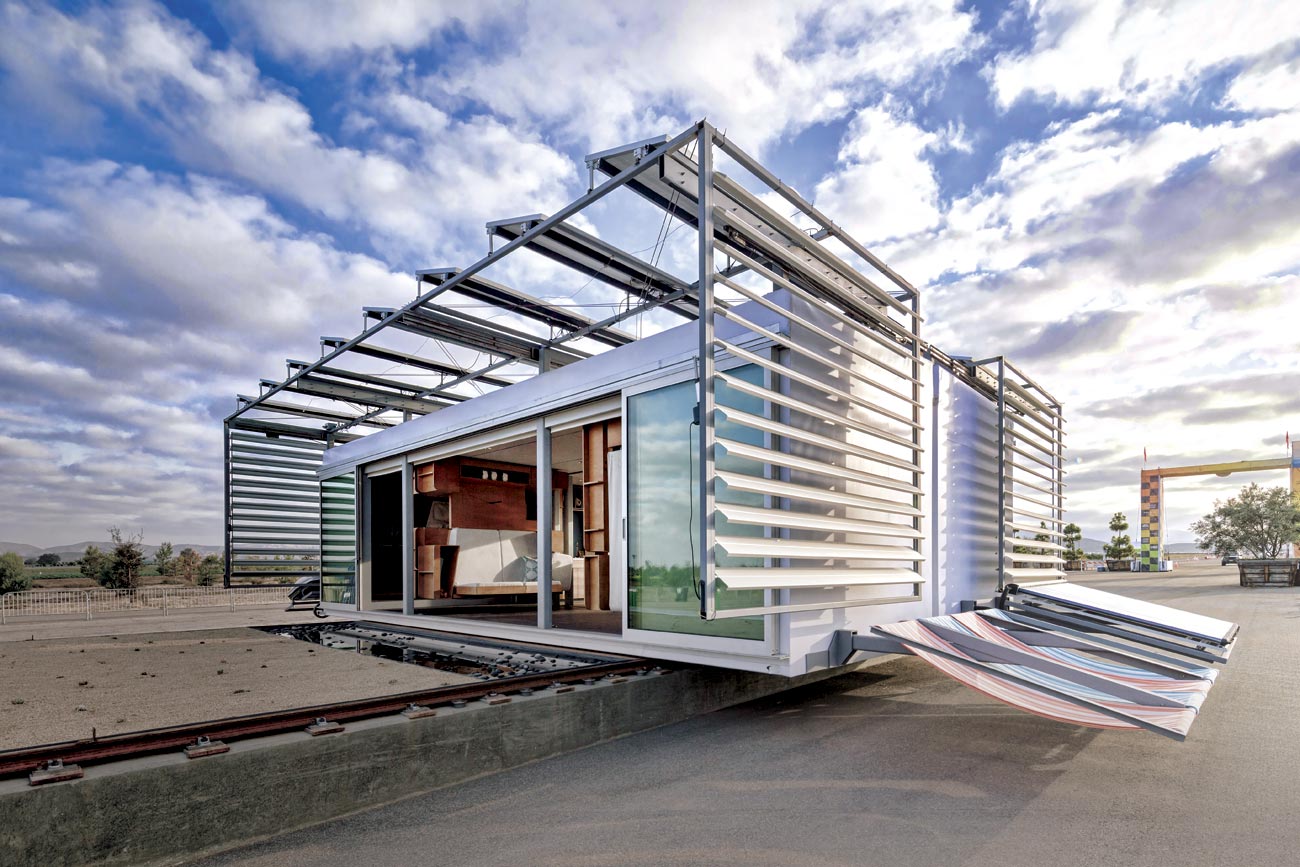 DALE is an unprecedented dwelling that has the ability to move, and through its movement it becomes a spatial, environmental, and economical solution that takes net-zero living to the next level. While its exterior configuration opens up and expands as its two modules freely traverse across its rail system, its interior organization complements this exterior flexibility in order to deliver maximum spatial flexibility. Two movable programmed partitions suspended from ceiling tracks within the living module divide the home into a bedroom, living room, and home office. The occupants are thus able to use all three rooms simultaneously when they are activated. However, by simply tucking them away, they can enjoy a single large living area. The core module, meanwhile, houses the mechanical room, bathroom, and (most surprisingly for a minimal-sized house such as this) a commercial-sized kitchen. Offset from each module is a sliding canopy comprised of an array of solar panels overhead and a pair of vertical louver panels on its sides. These canopies can be repositioned—independently, or in combination—in order to provide desired levels of shade, ventilation, and privacy for the modules as well as the in-between yard.

Each of DALE’s two modules operates on a pair of motorized bridge crane end trucks that are embedded in its steel superstructure. These modules are also interconnected through an array of industrial spring-loaded cable and hose reel assemblies. Each cable and hose has a fixed connection to a municipal power and water source on one end, and is connected to the modules at the other end by means of a spring-loaded reel. Accordingly, each hose and cable is able to move with the modules as they travel. 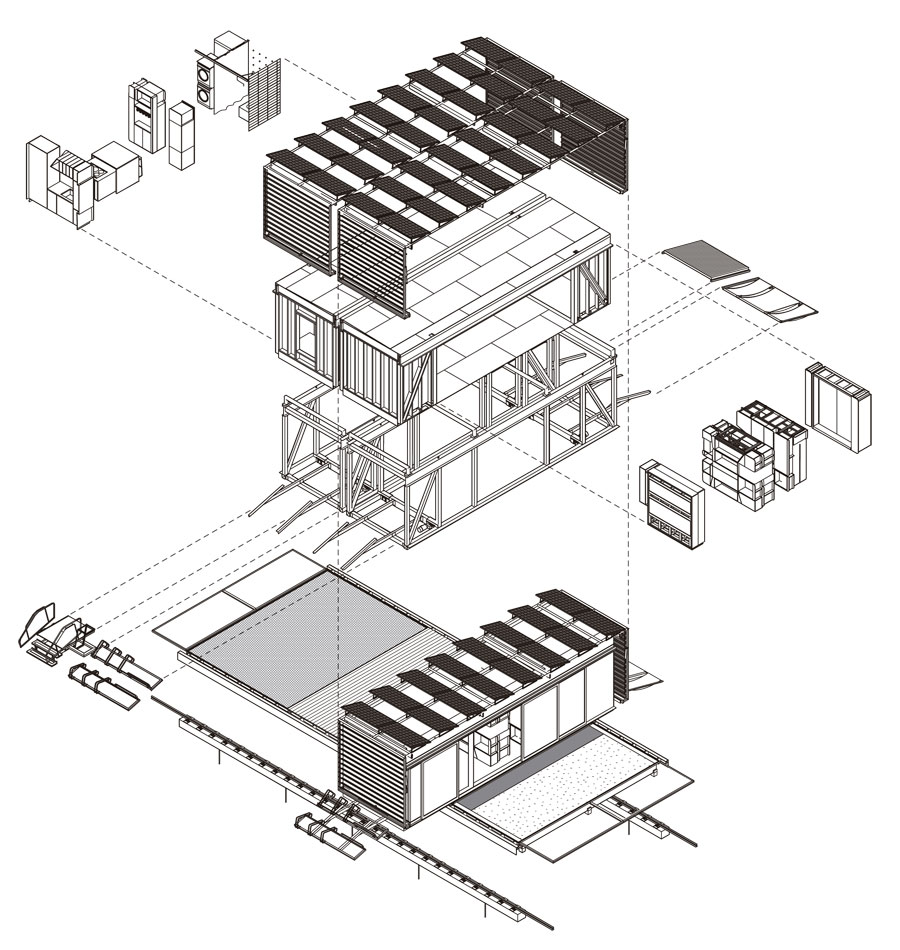 To ensure that these modules can move as desired while still offering a safe and energy-efficient living environment, DALE includes a precision positioning system and a variety of safety mechanisms. As part of the precision positioning system, each of the mobile modules is equipped with a rotary encoder—an electro-mechanical device that measures position based on the number of rotations of the motor shaft. A central controller uses input from these rotary encoders to calculate the absolute position of each module and the distance between them. When the modules are close enough to form a water- and air-tight seal, a limit switch is triggered, which signals the controller to stop the movement of the module(s). 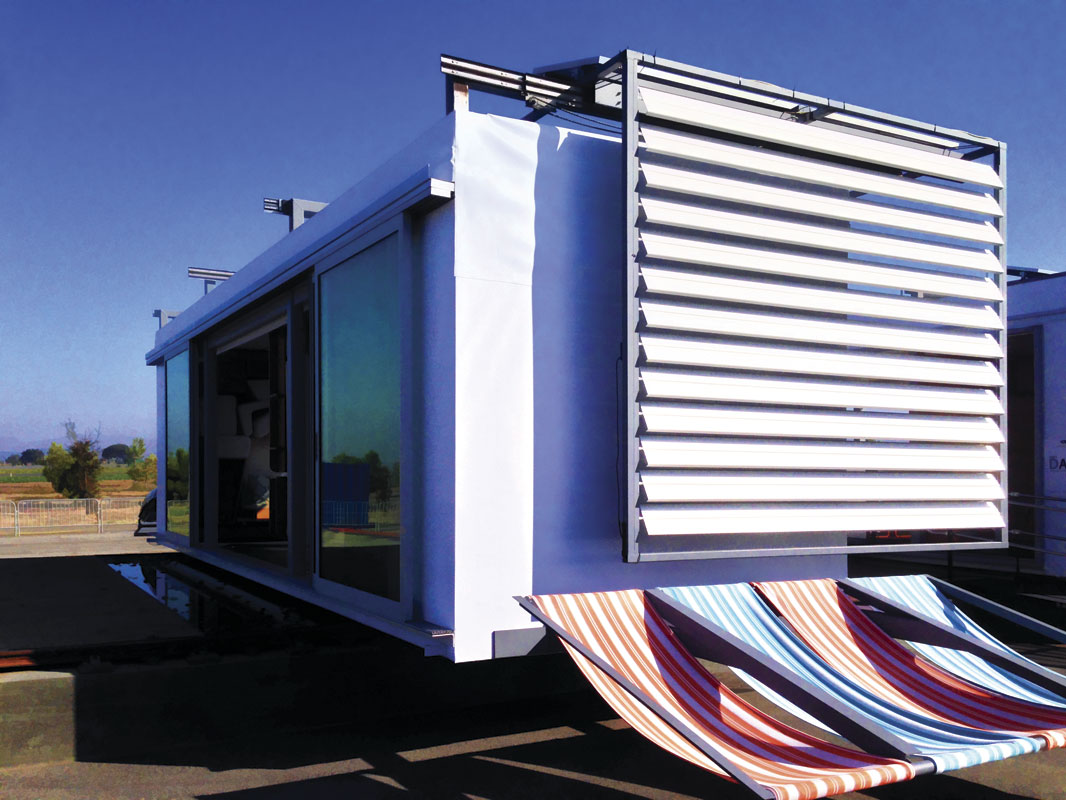 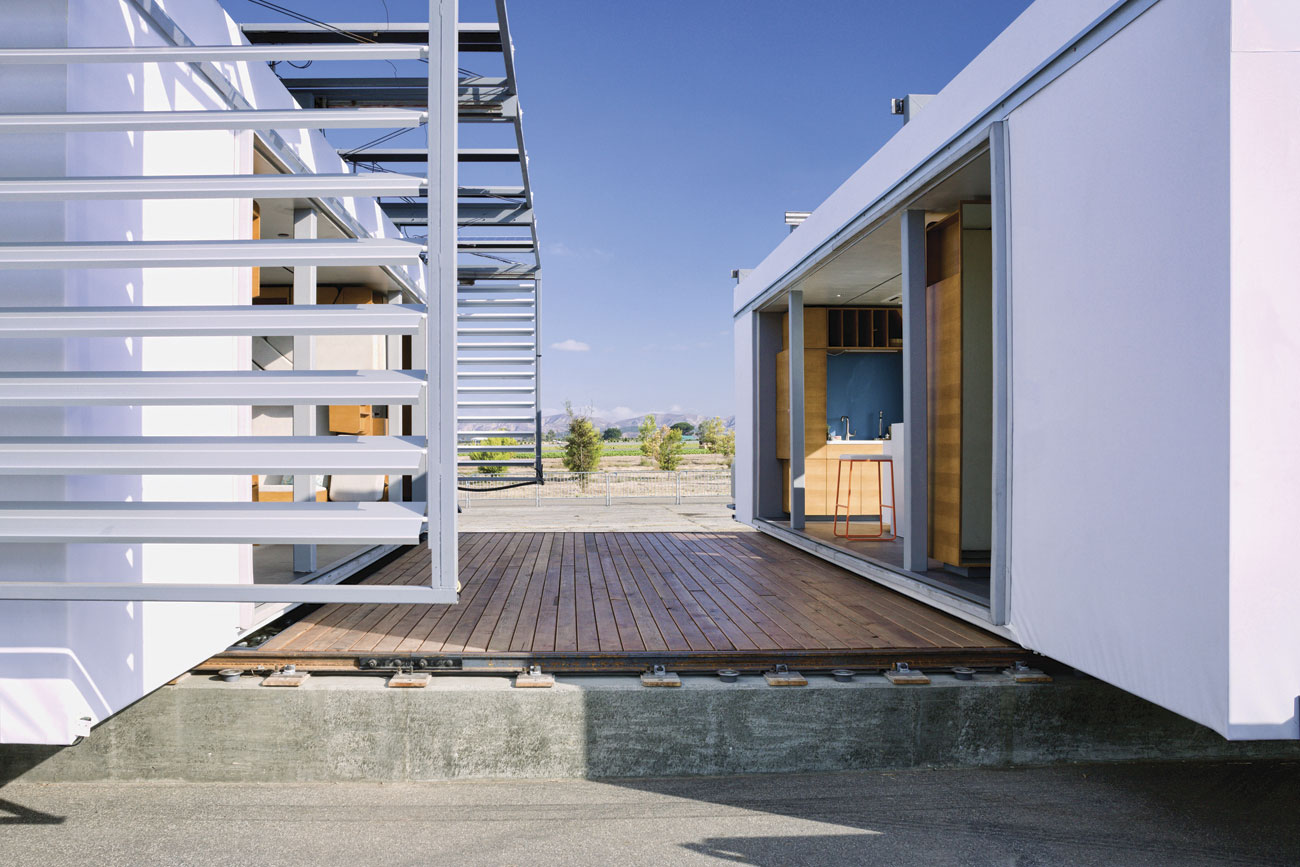 The safety system, meanwhile, is designed to support DALE’s movement by eliminating potential hazards. Light curtain pairs are located on the internal and external faces of each module. These include a transmitter on one side, which emits horizontal beams of low-level light, and a receiver on the opposite side. In addition, pressure sensors are mounted on the vertical edges of the canopies and exterior platforms. If the light from the light curtain is interrupted, or the pressure sensor is activated by a person or object entering the path of movement, the system will trigger the motor to brake, thereby halting the movement of the modules. In addition to the safety sensors, rubber flaps are installed along the lower edges of the modules to prevent small objects from being swept beneath them. Video cameras are also located on the top of each module to provide a live feed before and during movement—thus enabling the occupants to ensure that the path is clear. Finally, each module contains a manual emergency stop button in an easy-to-reach location. 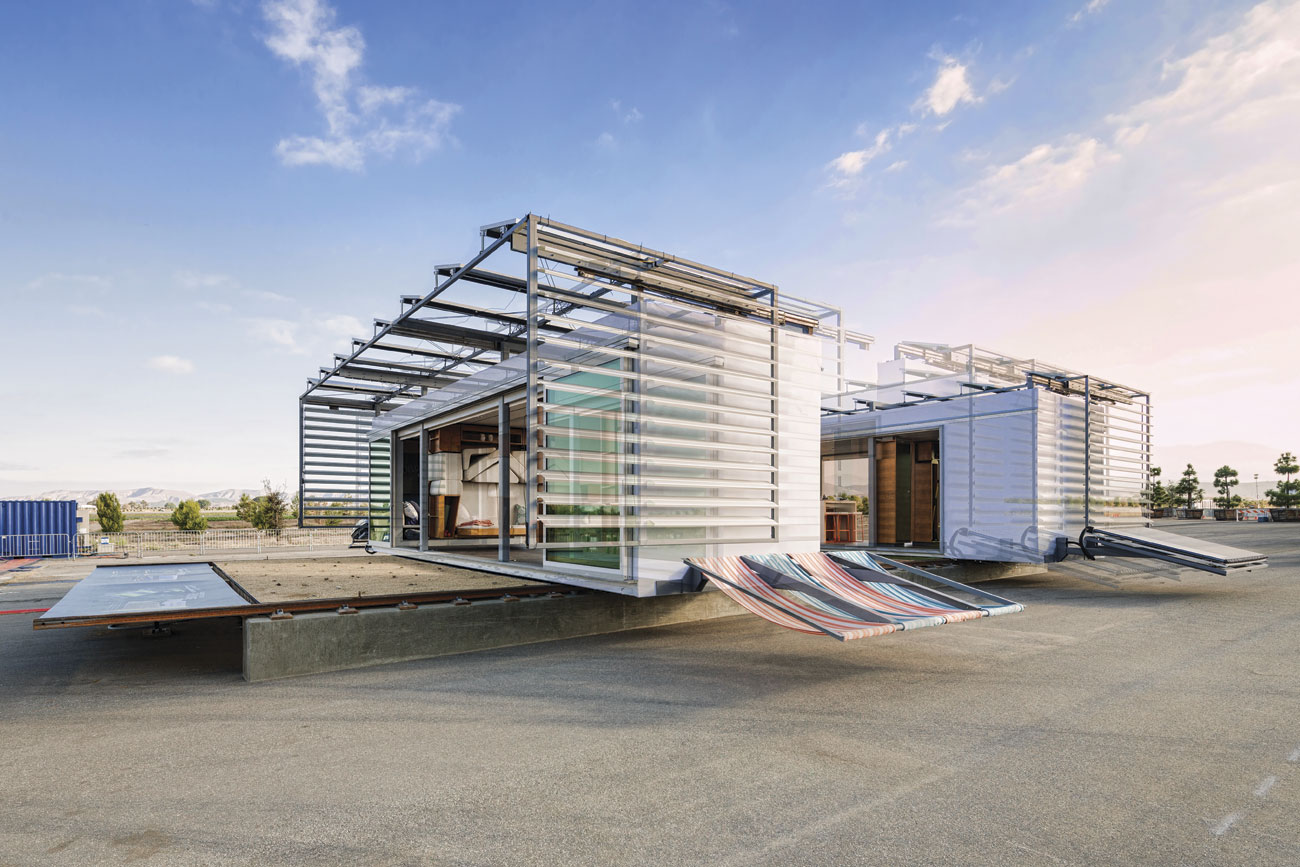 In addition to its moving components, DALE incorporates features that further invoke Southern California’s sublime climate, outdoor culture, and progressive outlook. Its exterior landscape apron is comprised of natural elements (grass, sand, wood, and water), allowing the occupants to enjoy a sampling of California’s diverse geographies. In addition, a pair of programmed interchangeable racks cantilevered from each module near ground level provide the infrastructure necessary to further capitalize on California’s environment. These racks include a solar thermal collector, a sports equipment rack, and a hammock. 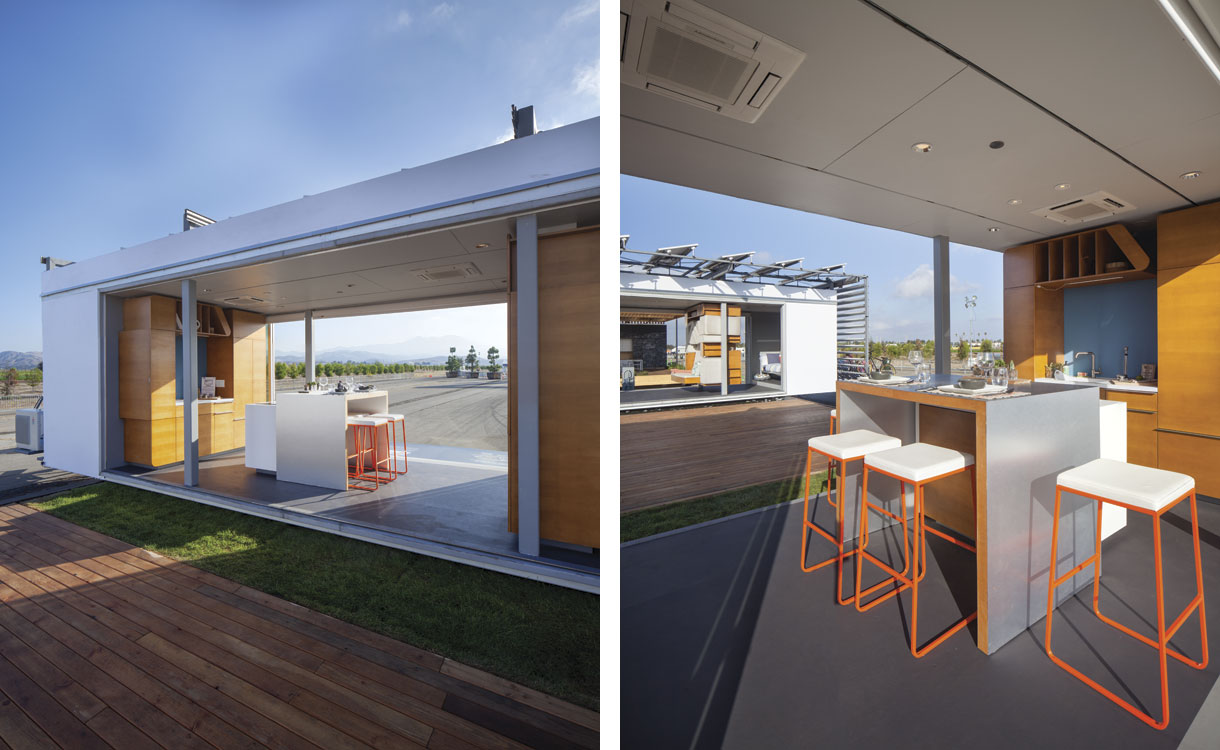 An additional feature is the character of DALE’s exterior envelope, which is an exterior gauge vinyl skin that is wrapped and pulled taut around the faces of the modules. This all-in-one building envelope functions as a continuous waterproof membrane, and thereby eliminates the need for typical exterior sheathing and finish materials. 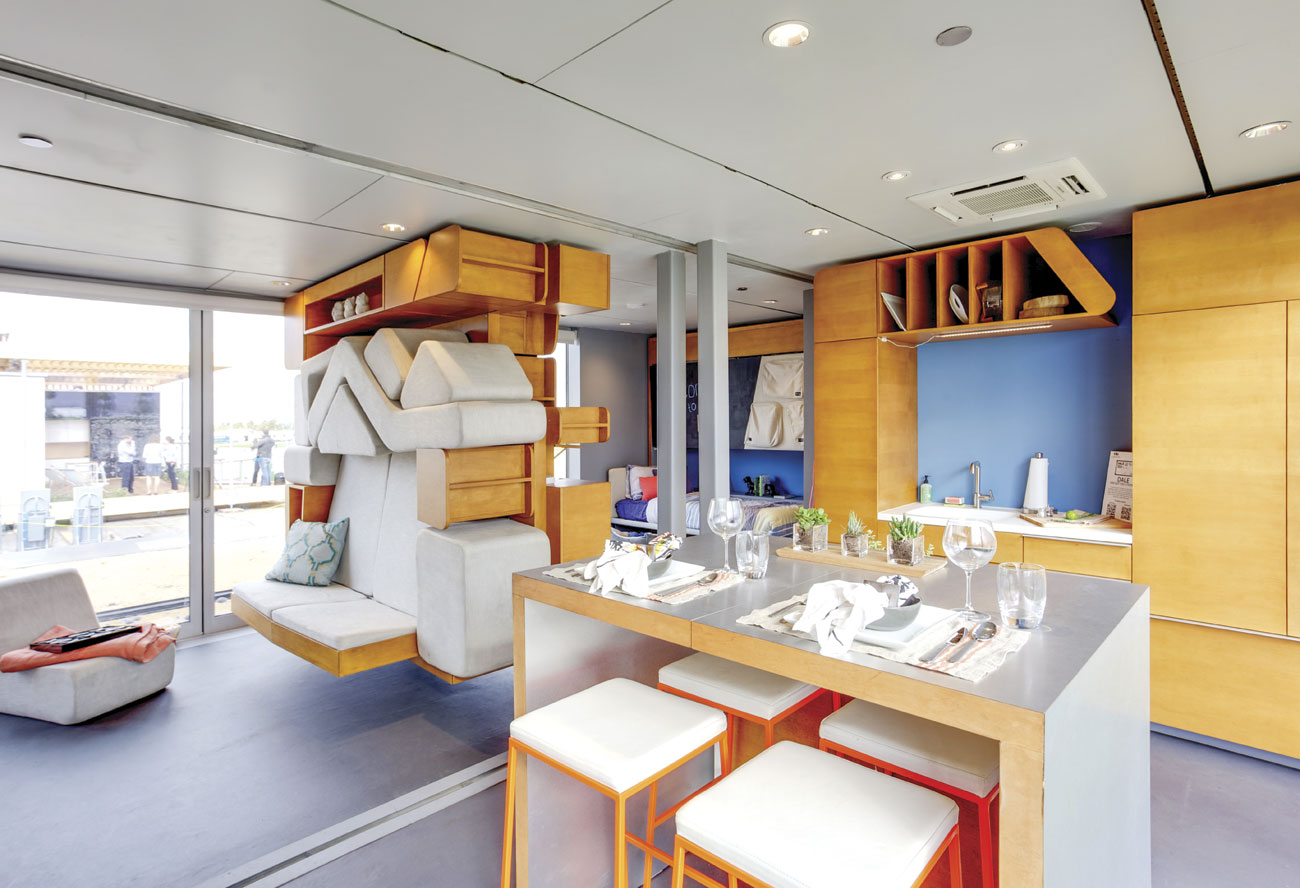 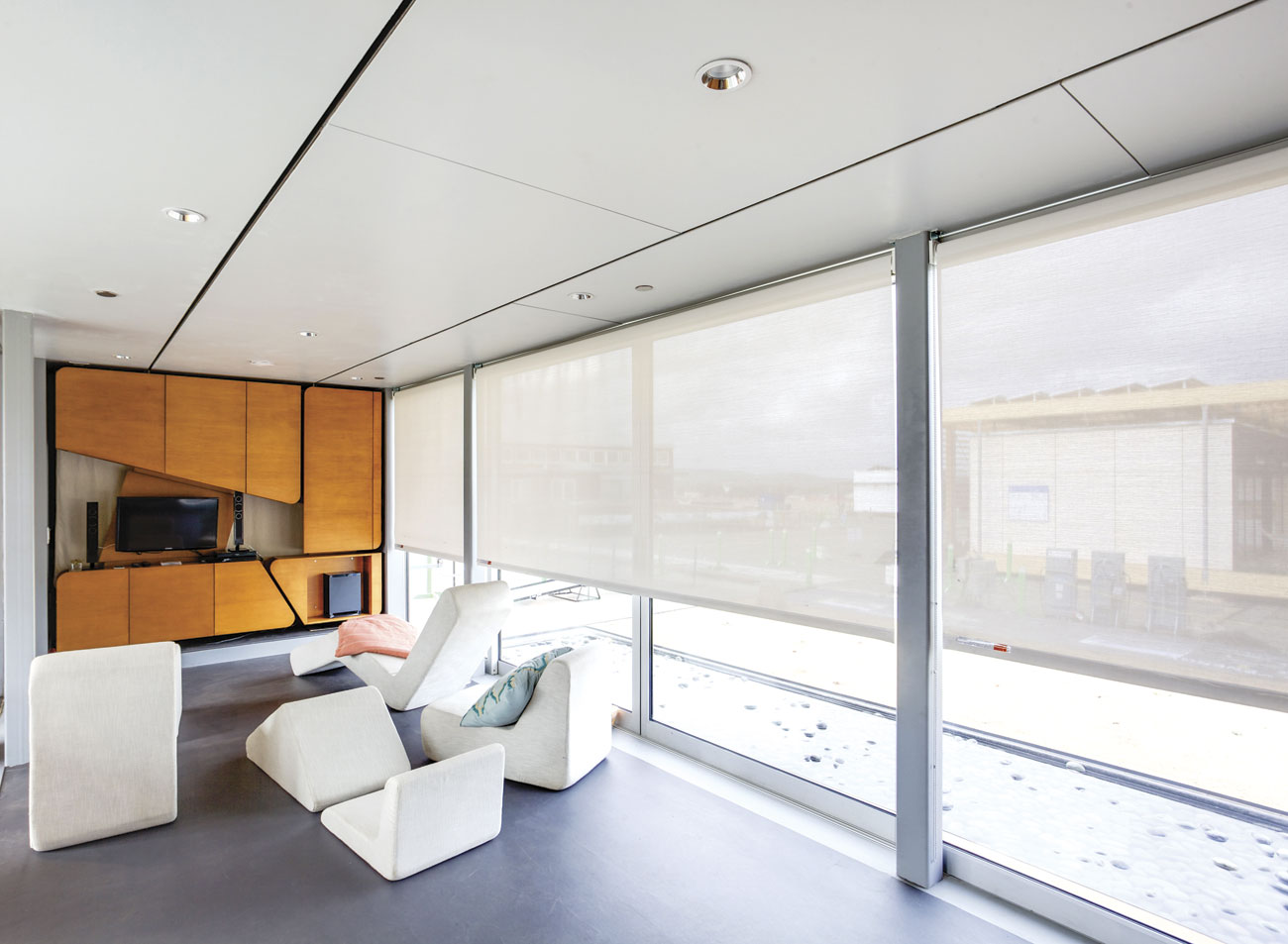 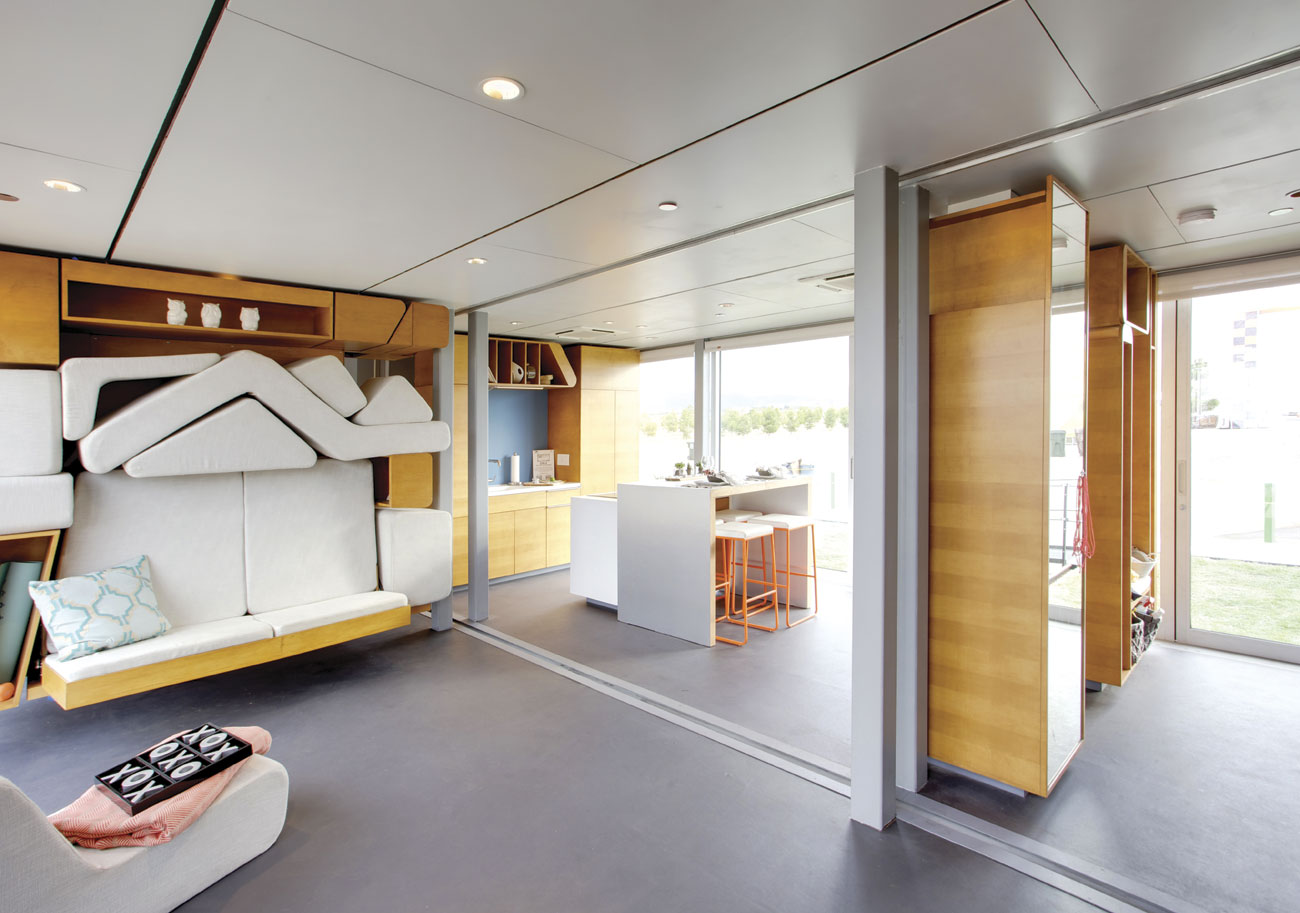