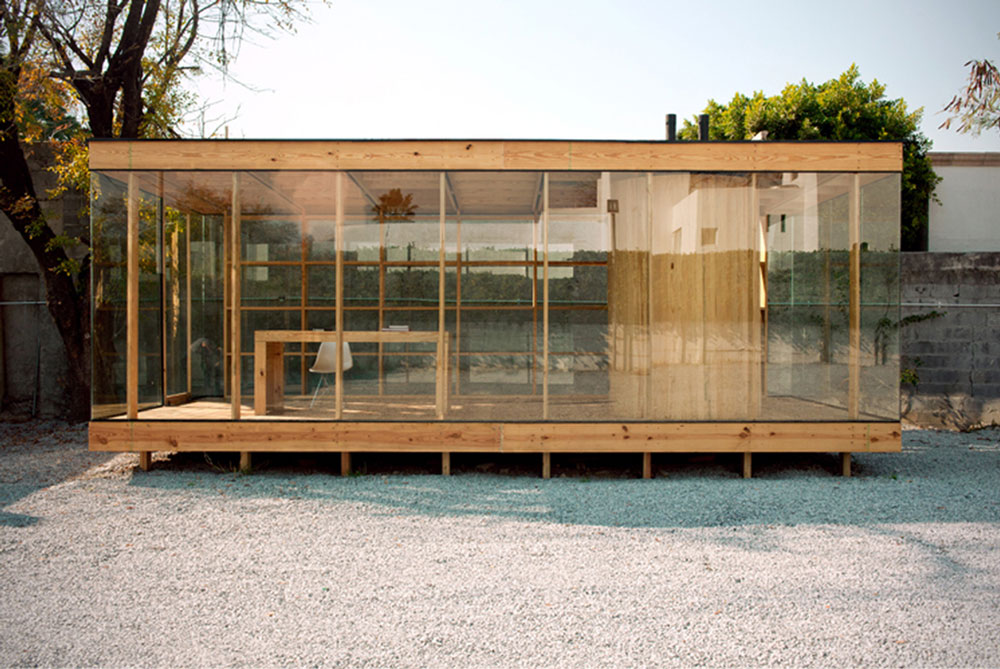 A constructive exercise was developed based on elements of wood of 2″, 3″ and 4″ thick starting from a foundation based on concrete cylinders cast in place surrounding 16 4″x4″ wood columns placed 1 meter apart each other. A grid of beams is set on the columns to give support to the floor decking. 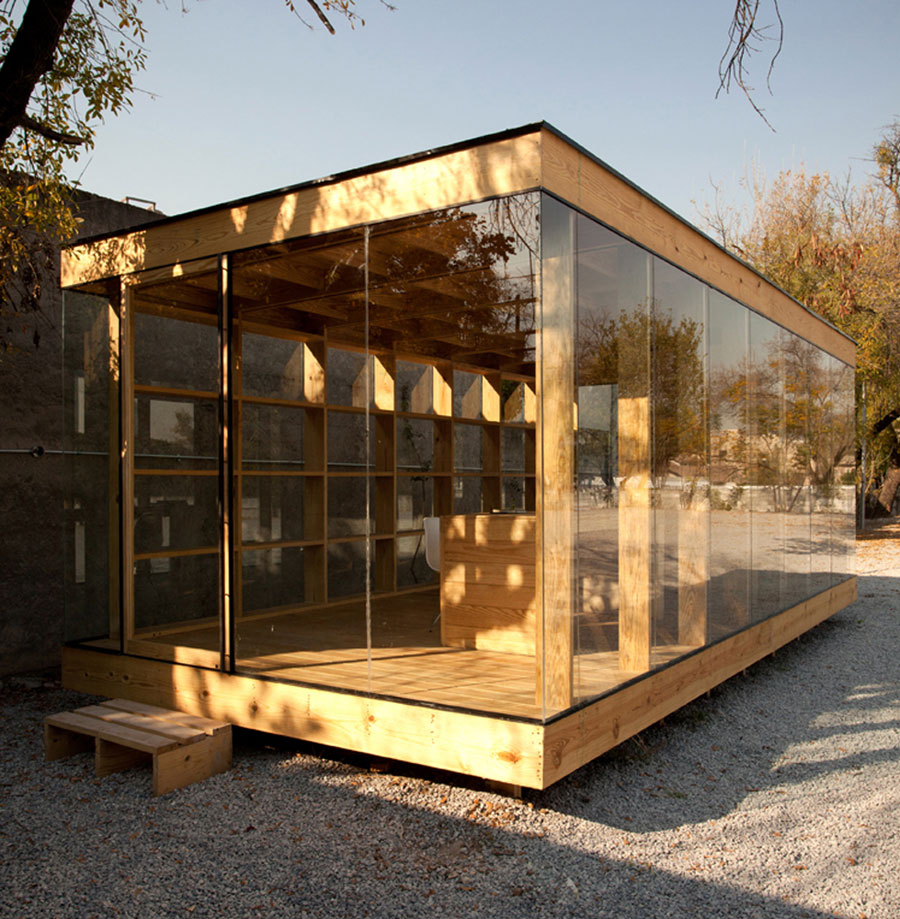 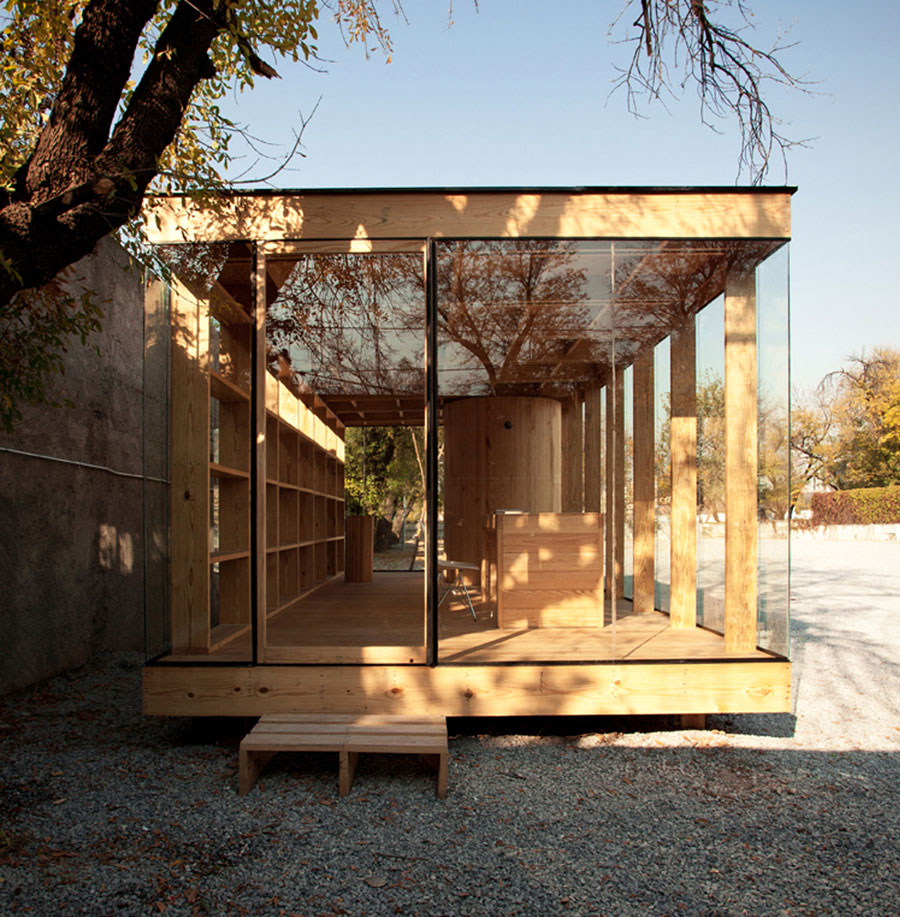 In one side of the construction the supports for the roof are a row of thin wood columns placed in the same modulation than lower supports, while in the other the structural support is a vertical grid that also set a piece of furniture throughout the space. On these elements rests another grid holding a light cover of plywood boards, covered with a thermal insulator and a thin sheet metal skin as waterproofing.

Only two elements are placed inside the space: two wood cylinders. The bigger one contains a bathroom area, ventilated by a chimneys system. Another small houses the sink and serves as support for the water pipes. 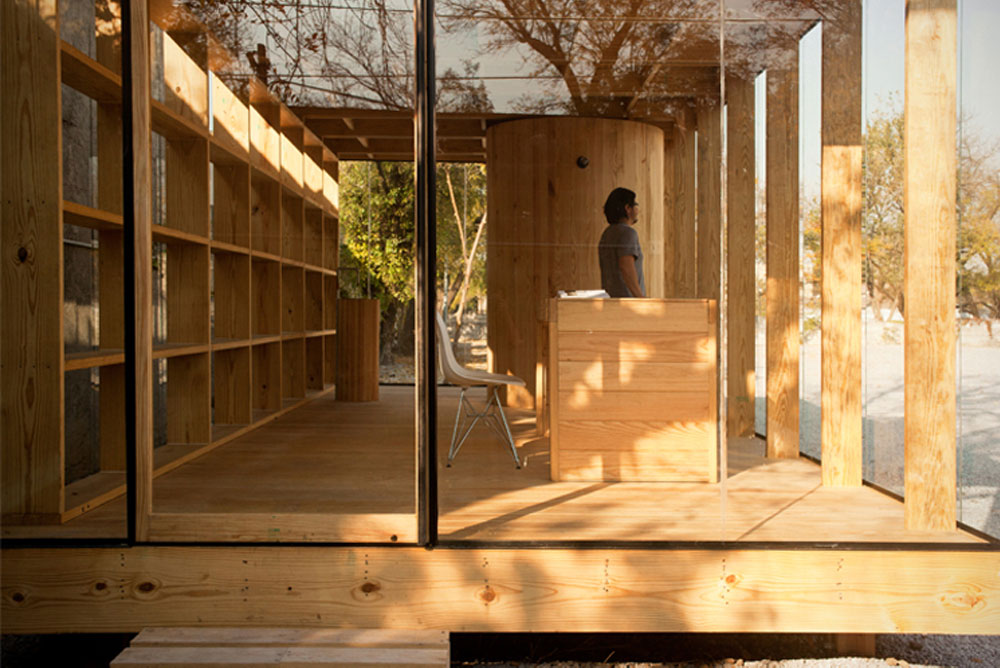 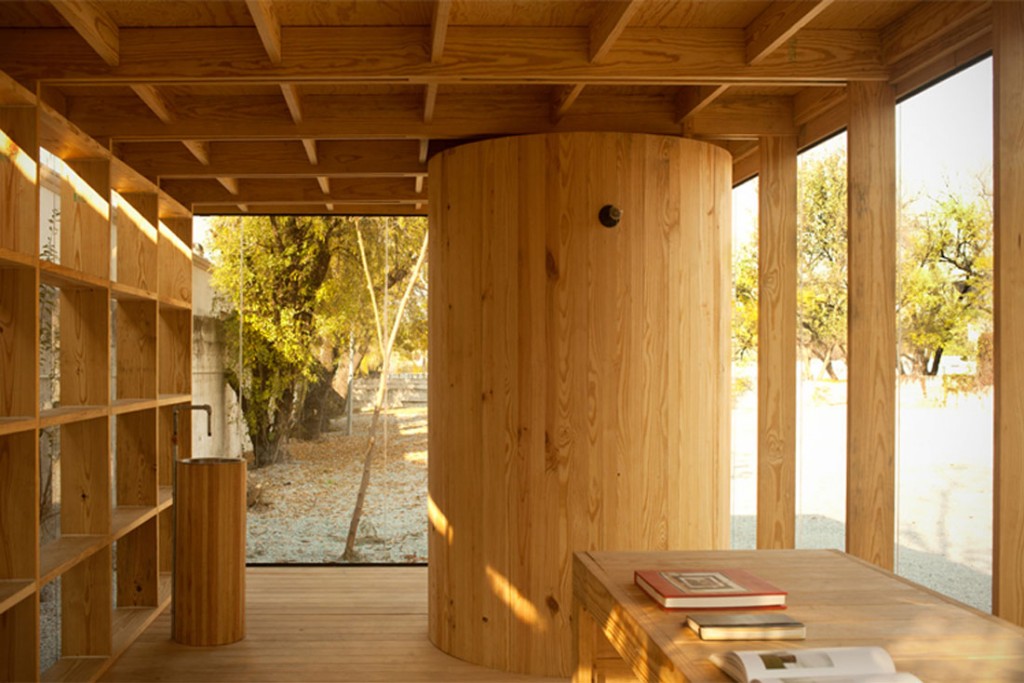 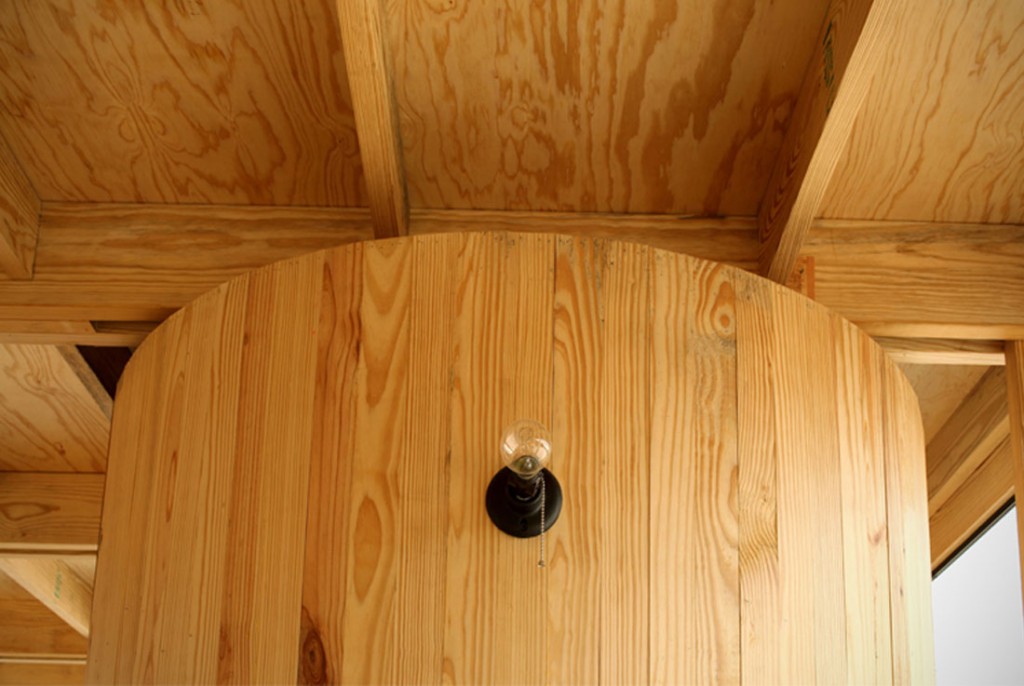 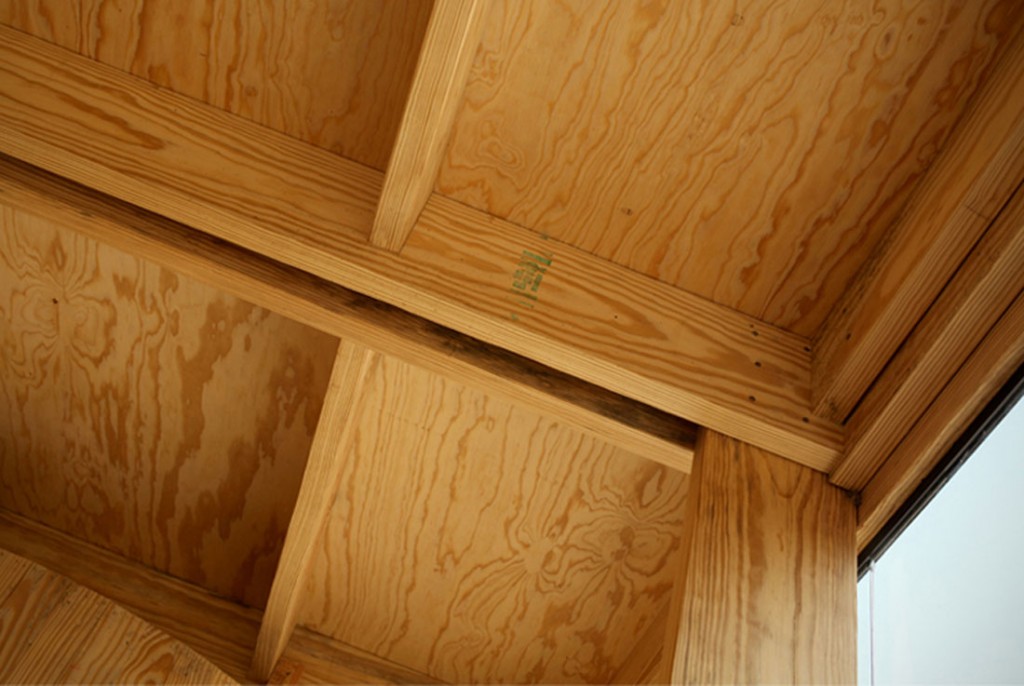 The isolated object serves to house a space program reduced to a mono-environment: study and bedroom.

This is an experimental basic house. This house is for one person or for a very small family. This house is all made of wood and is floating over the site to reinforce the construction expression of its structure. The exterior limits of the house are panels of clear glass to create a transparent space to see the site. The site is a plot yet unbuilt inside the city. 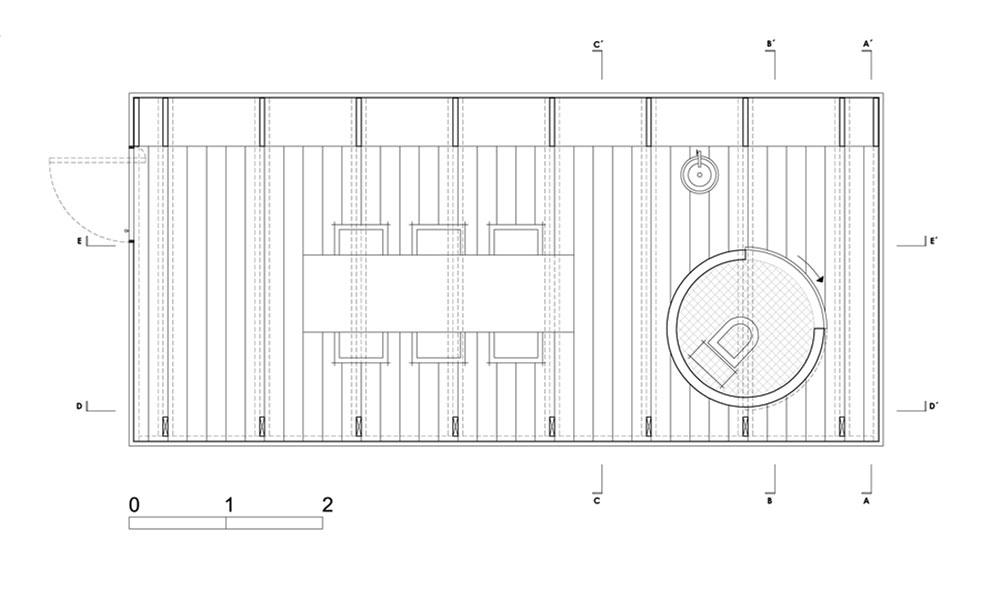 This is a reaction about the action of over building the city.

The work makes a different understanding about the use of land and about the question of build or not and how much is necessary to build within the city. Within this big amount of buildings that appear every day in the city this consideration also speaks of sustainability because the results we see by the overbuilding are not being good. Using this idea of sustainability we decided to make a minimum housing using inexpensive materials and very basic cooling systems. Basic but at the same time very logic: protect the space from the sun or lift it from the ground allowing the movement of the wind to help to cool it. Using a very tight budget to reach a more poetic space and talking more about the emptiness rather than the filled and more about an architecture more transparent than opaque. The work is also transparent in its structure and the honesty in which the materials have been used. 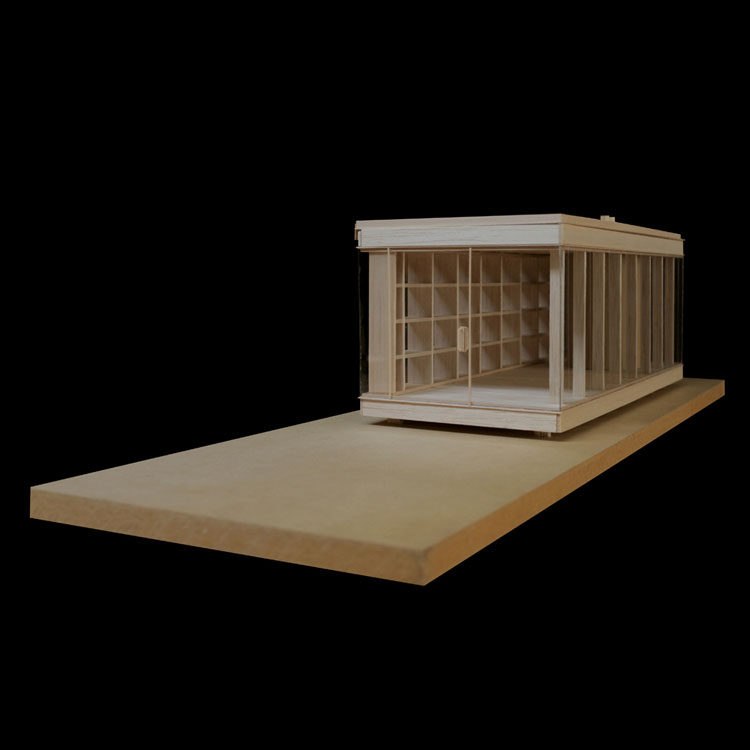