The Iceberg’s sharply drawn silhouette with its 11 white peaks is a significant addition to the skyline of Aarhus – both from the landward and the seaward side. The project is located at a prime location on the outmost harbour front in Aarhus’ new quarter, Aarhus East, and consists of 208 apartments. Like many other worn-out industrial harbour areas, the former container port of Aarhus is being transformed into a vibrant new neighbourhood with a variety of functions: housing, educational institutions, offices, retail, sports and leisure. The Iceberg is among the first completed projects in an area that, in the future, will be home to 7,000 inhabitants and will provide 12,000 workplaces. Its total site area of 800,000 m2 makes it one of Europe’s largest harbour front city developments. 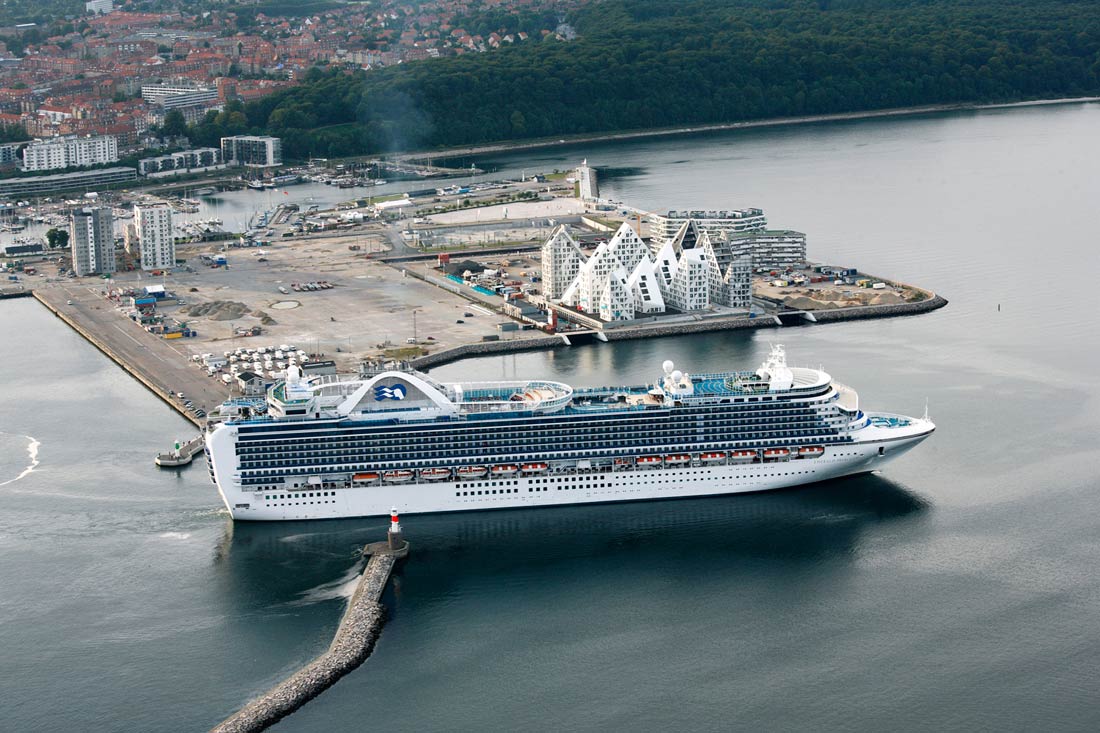 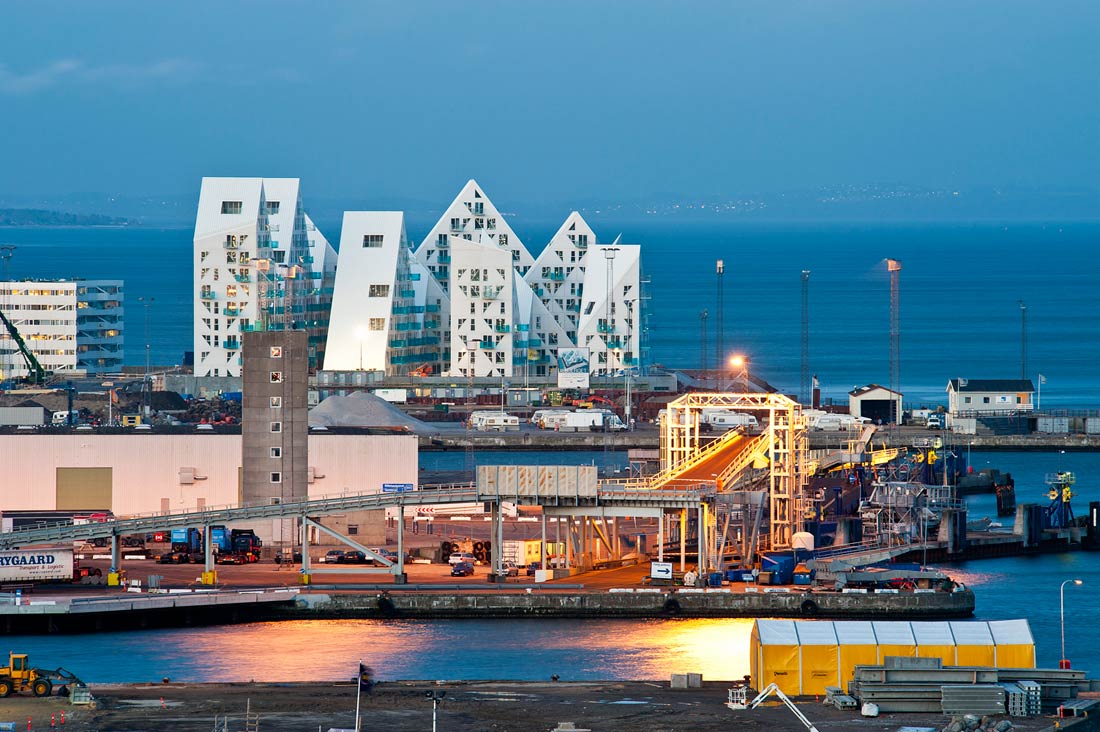 The team’s ambition and the starting point for the building’s characteristic design was neither to create an iconic form nor to make a building that looked like an iceberg. Instead, the project originated from very rational considerations and classic architectural virtues. The inspiration for the Iceberg came primarily from the site’s extraordinary location with spectacular views over Aarhus Bay. Thus, the seemingly simple task was to maximize views and sunlight conditions for every single apartment and, at the same time, respect the inland urban context. By turning well-known architectural elements upside down and combining them in different ways, these rational basic considerations resulted in an extraordinary and forward-thinking residential complex. 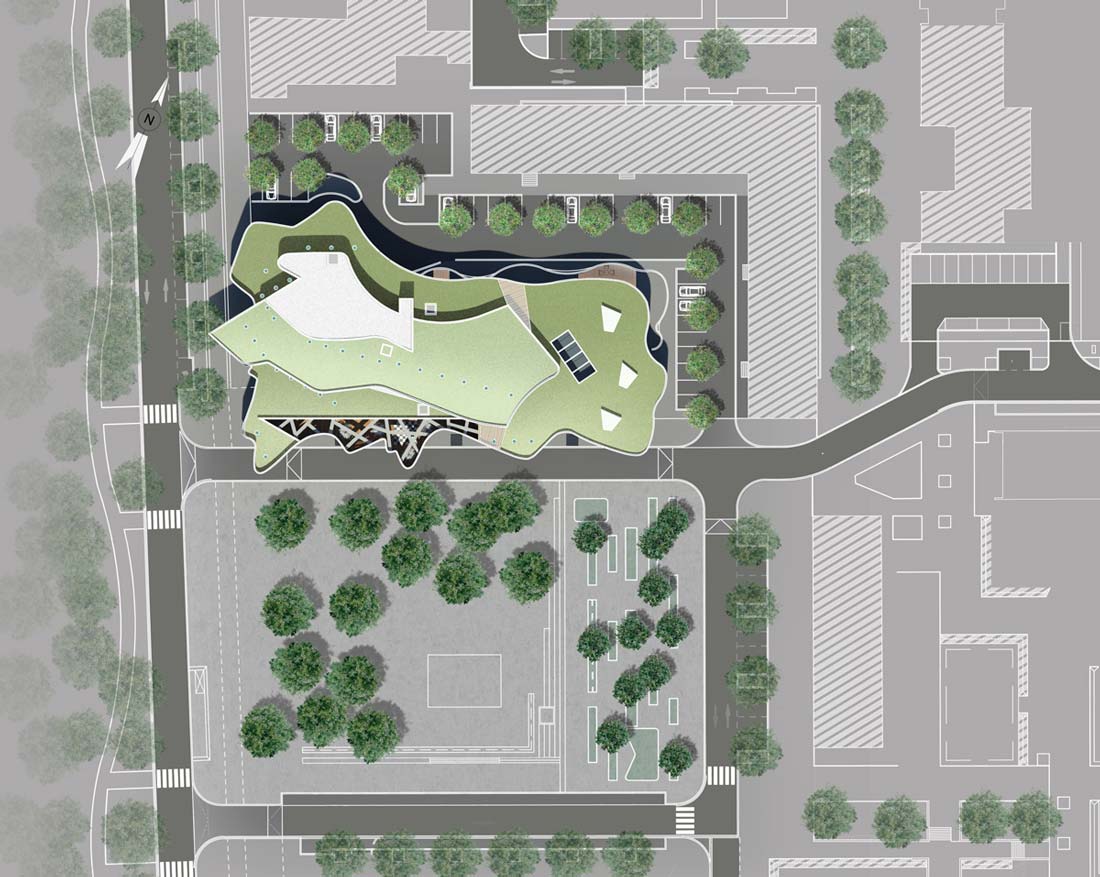 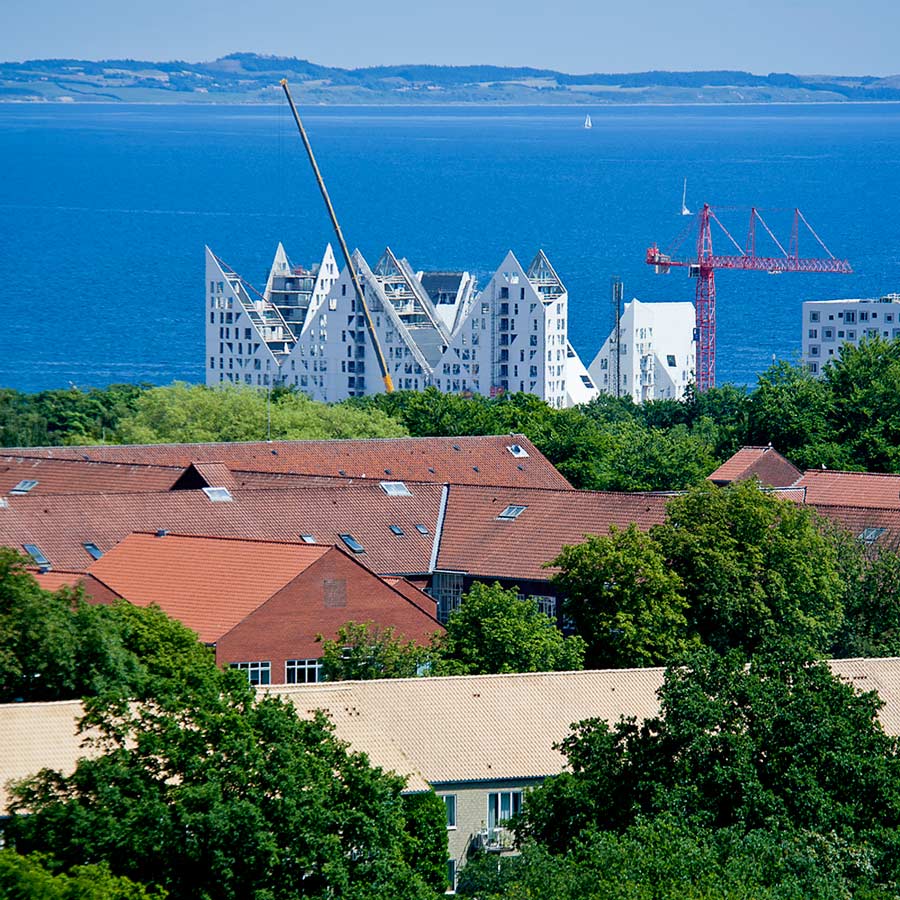 In order to obtain these positive features throughout the entire complex the design team had to challenge the restraints imposed by the district plan, including the high building density and the relatively low permissible building height. Instead of following the master plan, which was dominated by traditional closed blocks with central courtyards, the Iceberg is laid out as four L-shaped wings, where the spaces in between open towards the water. In order to obtain optimal daylight conditions and views over the bay, these angled building volumes are cut up by jagged lines. By remaining well below the height limit at many points, while exceeding it at others, the architects succeeded in keeping the project’s average height within the permissible limits. 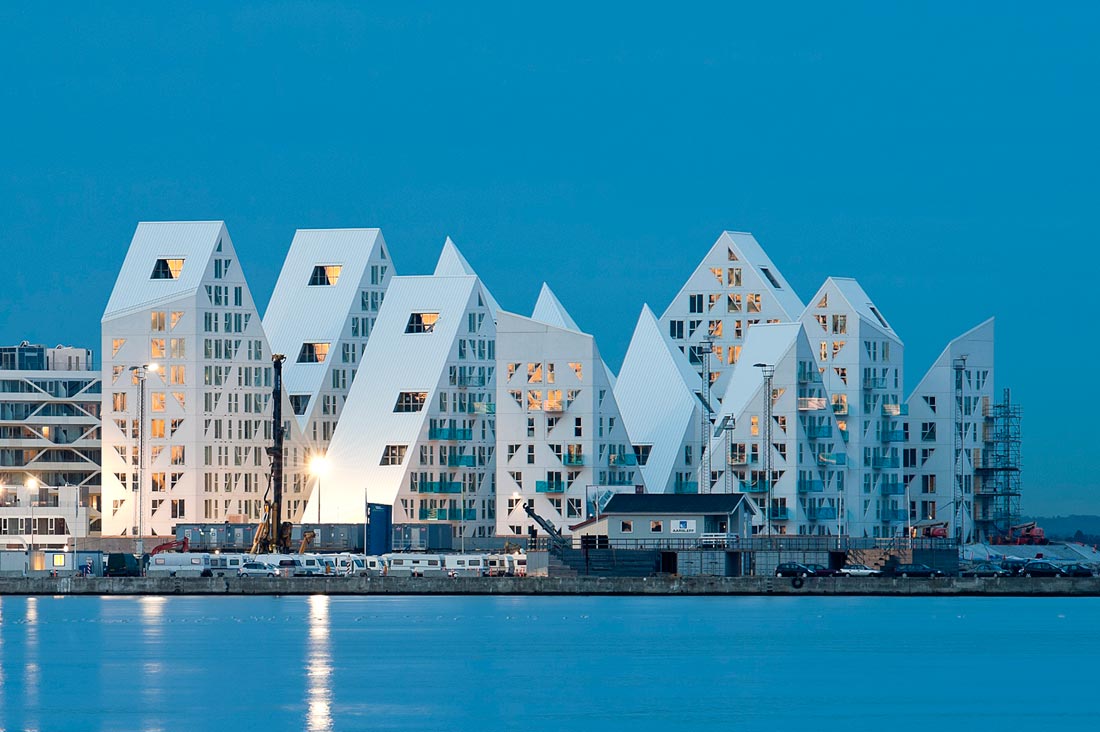 The roofs rise and fall into peaks and valleys, which create visual passages across the individual volumes ­– like floating icebergs that constantly refract one’s gaze. Thus, even the back wing’s residents can enjoy the view and generous natural lighting. The principle of dividing each building into tops and valleys contributes to adapting the scale of the building volumes to both the surroundings and the interior spaces. Instead of being considered as a block turning inwards, the complex is experienced as an open extroverted structure, creating an increased architectural appeal. 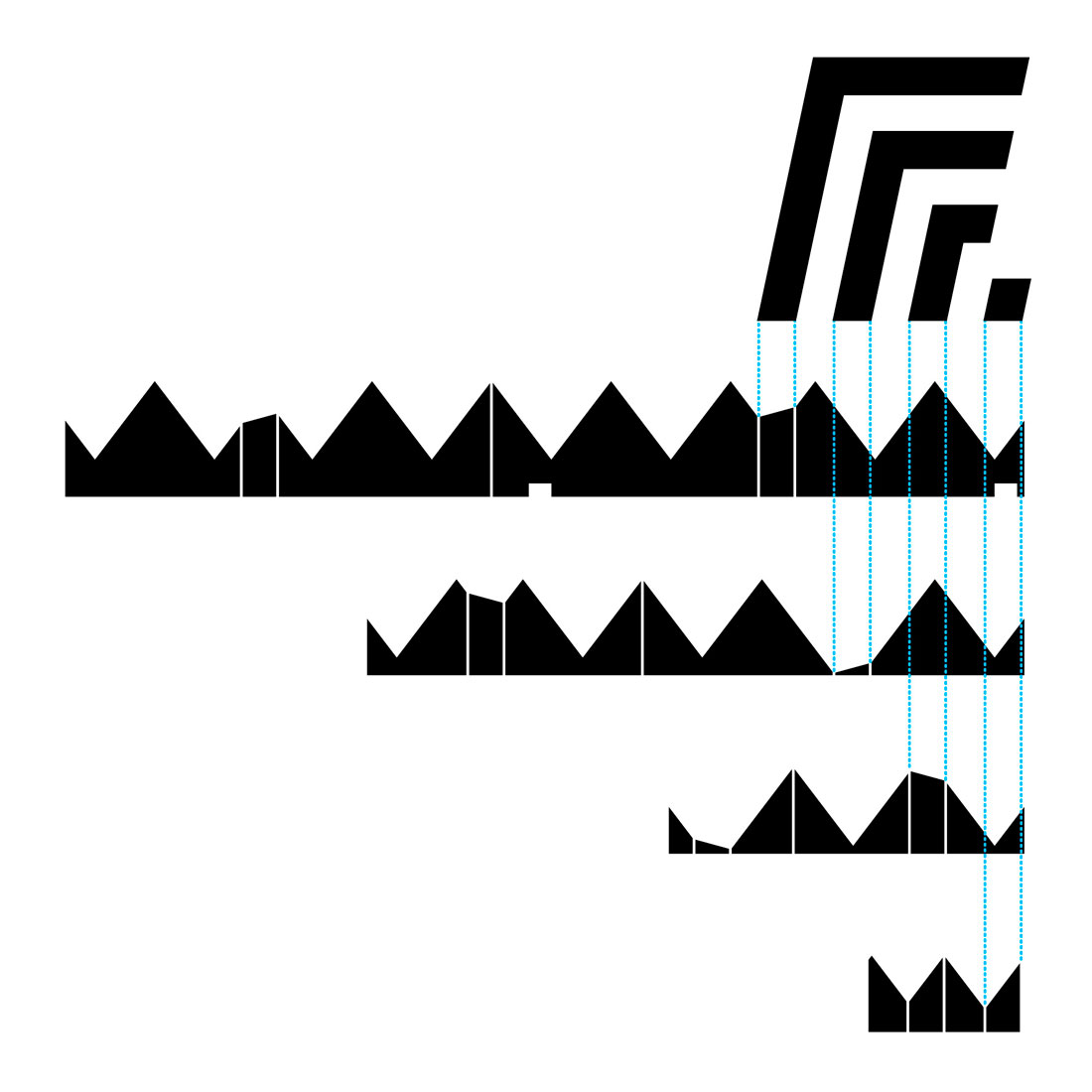 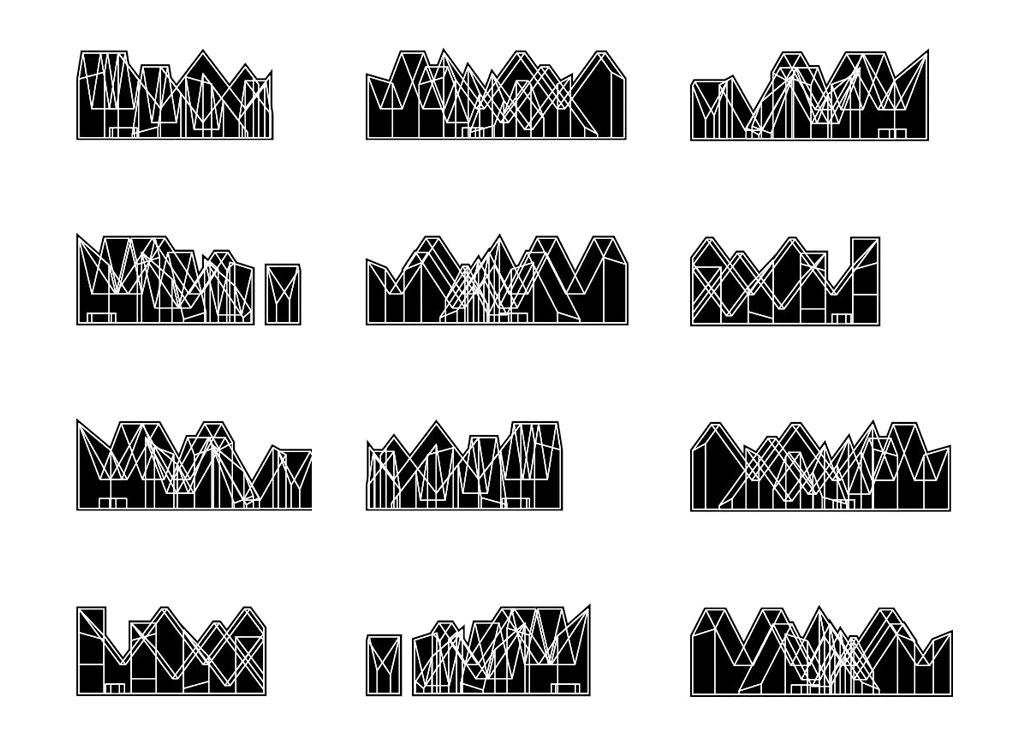 In selected areas the structure of the building is pressed down towards street level to create a harbour-oriented character and scale, which will interact with the future seafront promenade and public spaces. In other areas the structure is pulled upwards to create more urban qualities, which are oriented towards the city and the Iceberg’s landward neighbours. City and harbour meet in one common idiom. 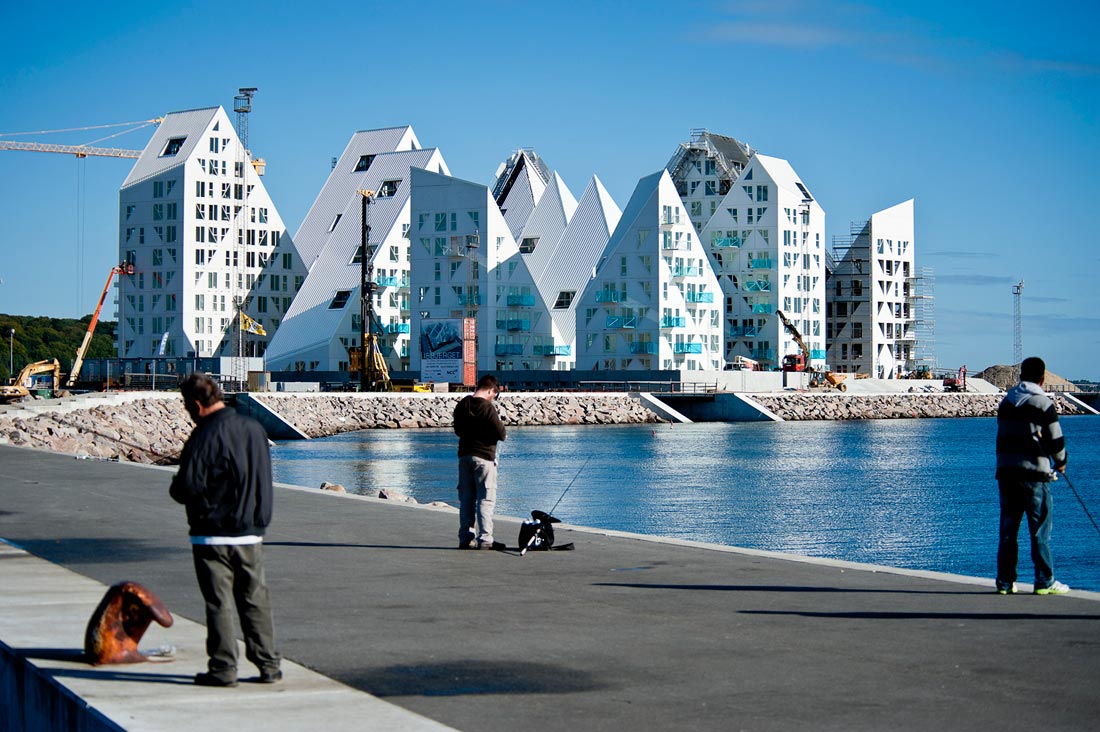 The varying and spectacular forms that derive from this simple algorithm resulted in a spatial complexity, which made it possible to fit a varied range of different dwelling types within the complex. The outer geometry changes upwards through the building, and consequently also from one apartment to the next, ranging from 55 to 227 m2 including two-storey ‘town houses’ and affordable smaller flats as well as exclusive penthouses in the peaks. 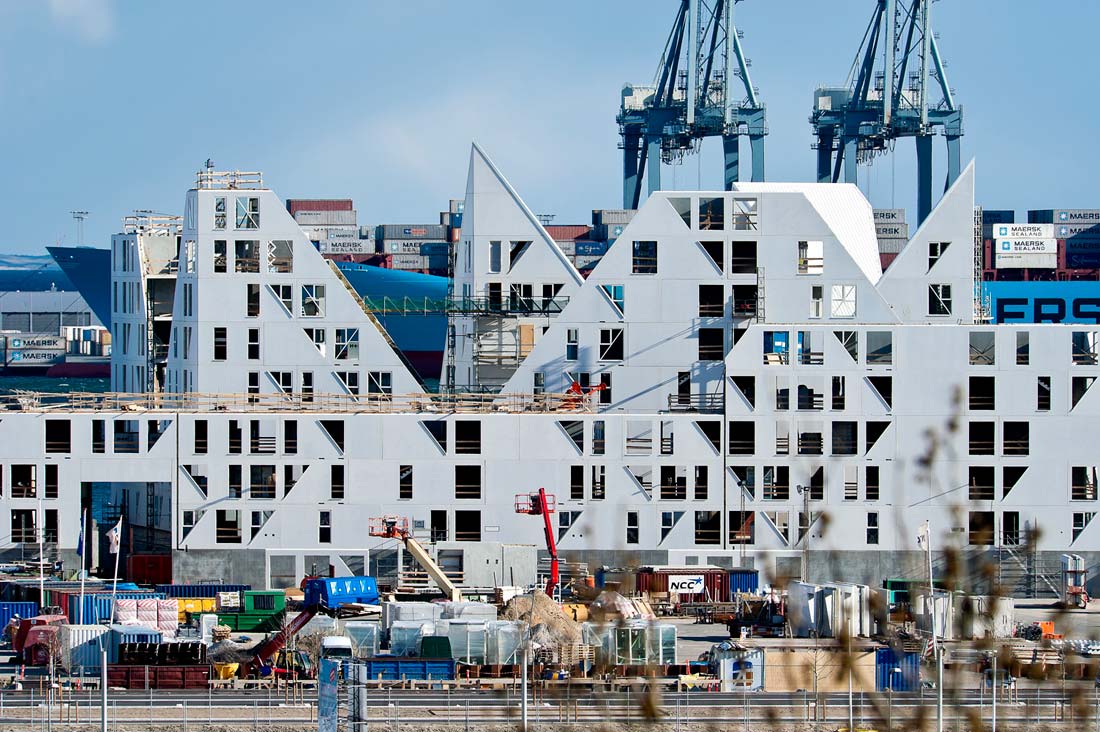 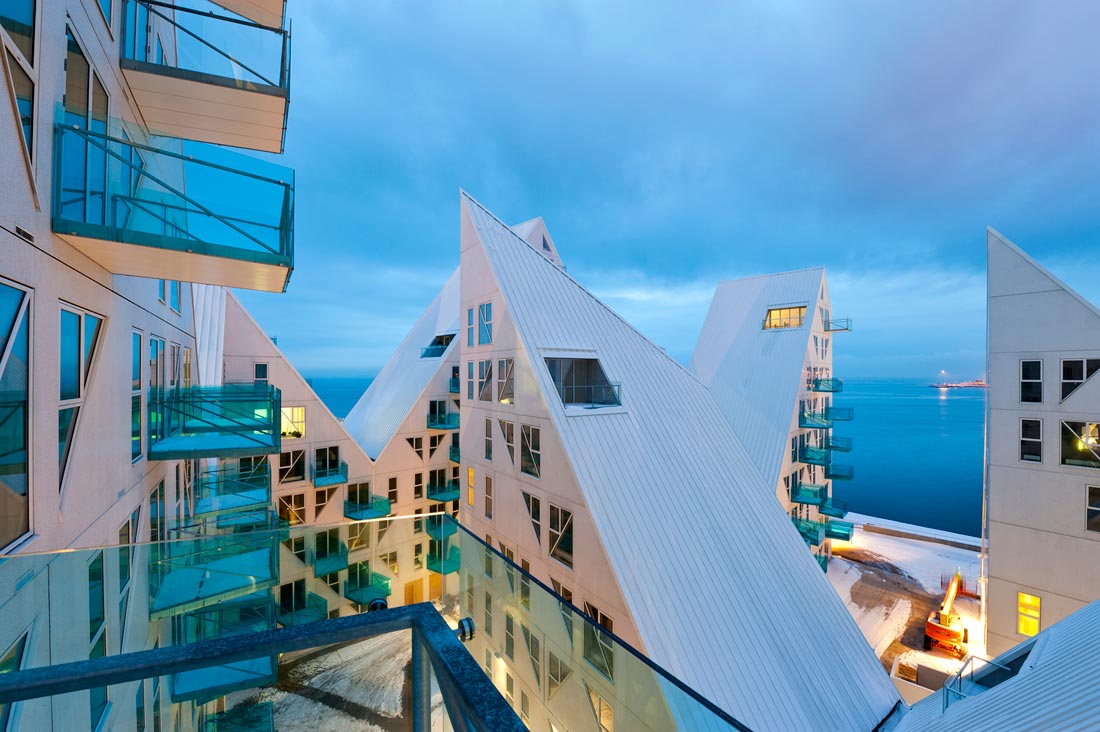 The variety of residences with different balconies, shapes and orientations, as well as the combination of owner-occupied and rented flats, aim at creating socially diverse urban surroundings that form a lively local community: the building complex becomes a neighbourhood instead of a mere series of housing blocks. 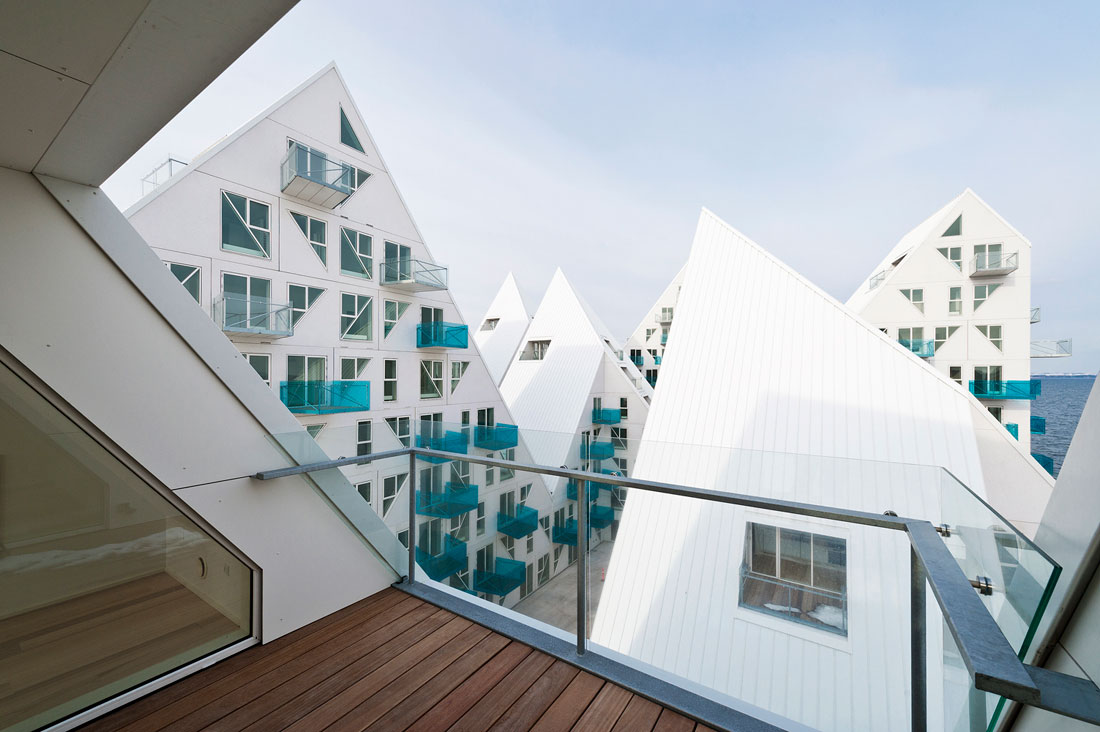 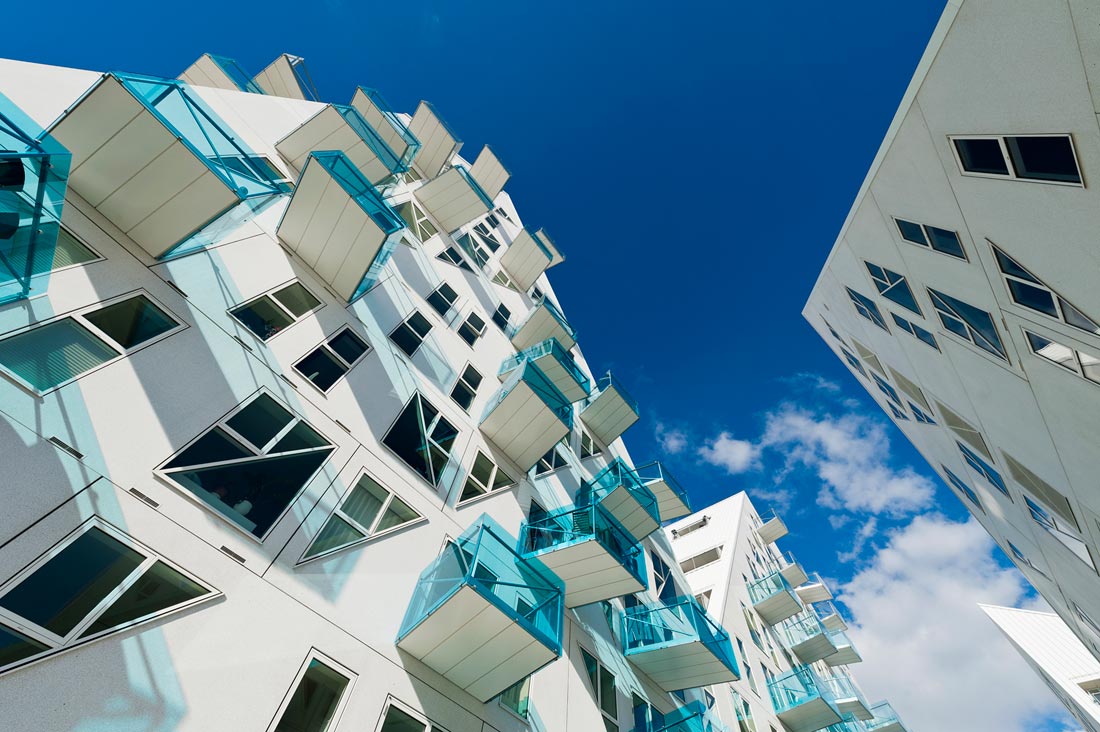 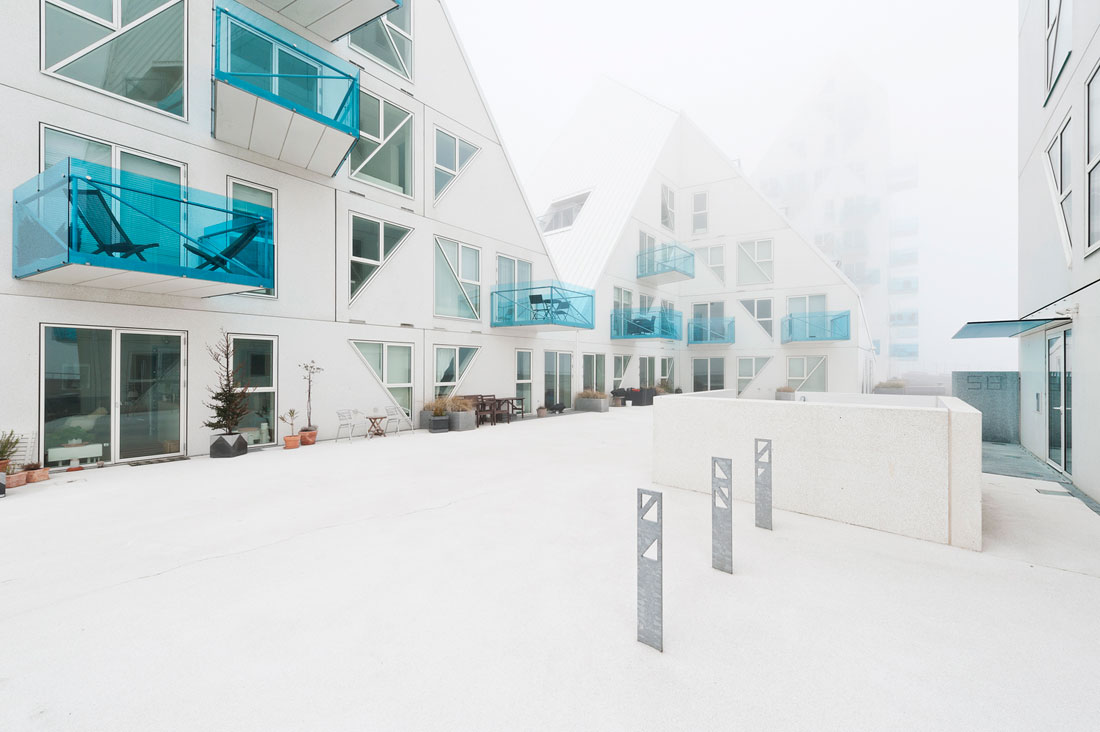 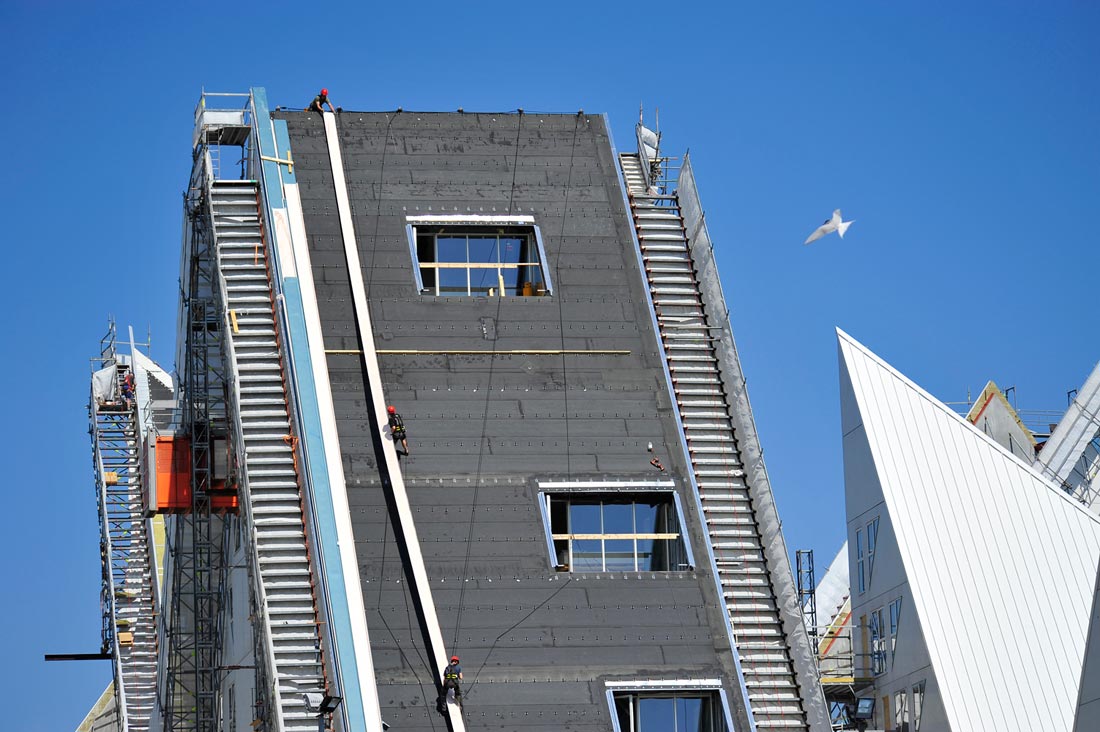 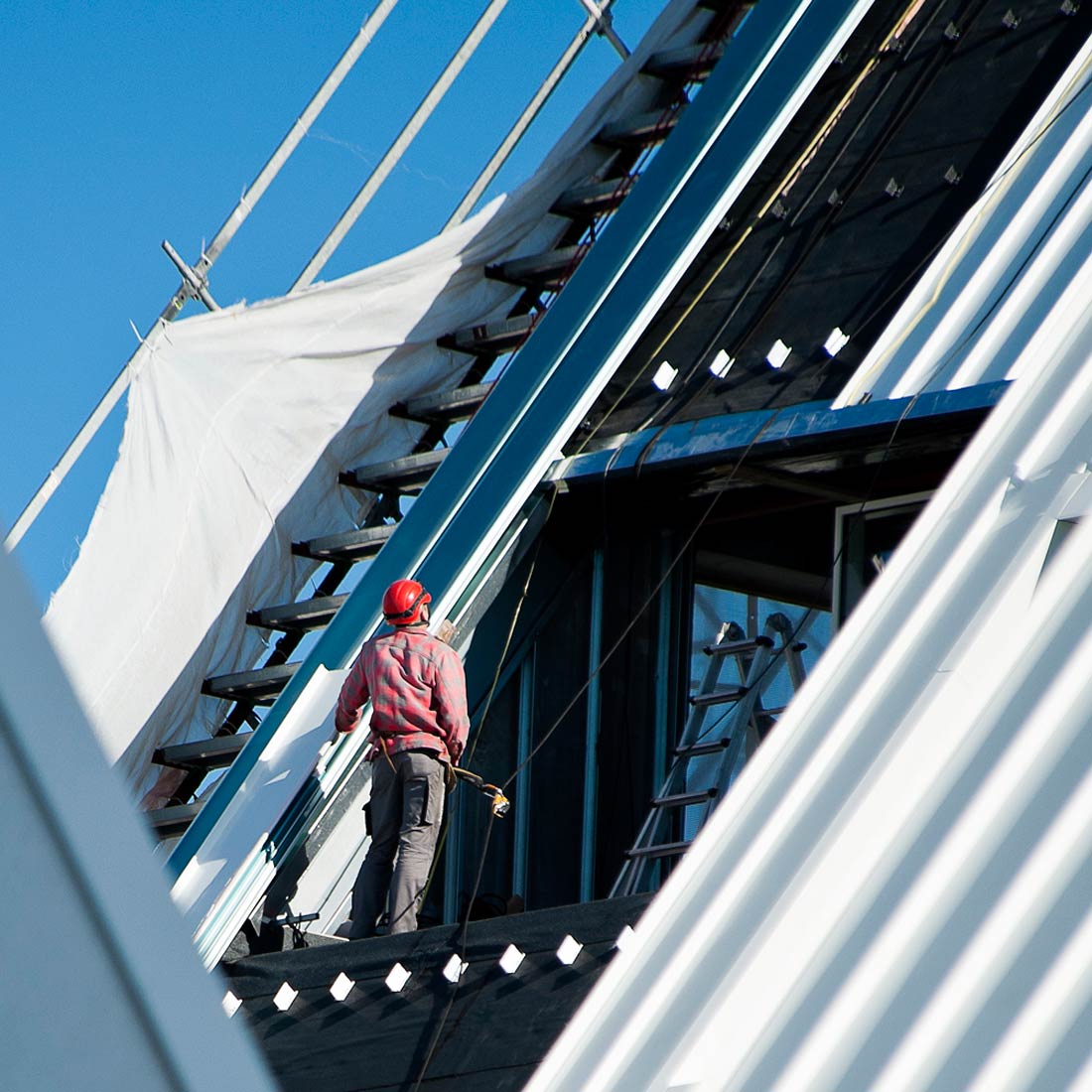 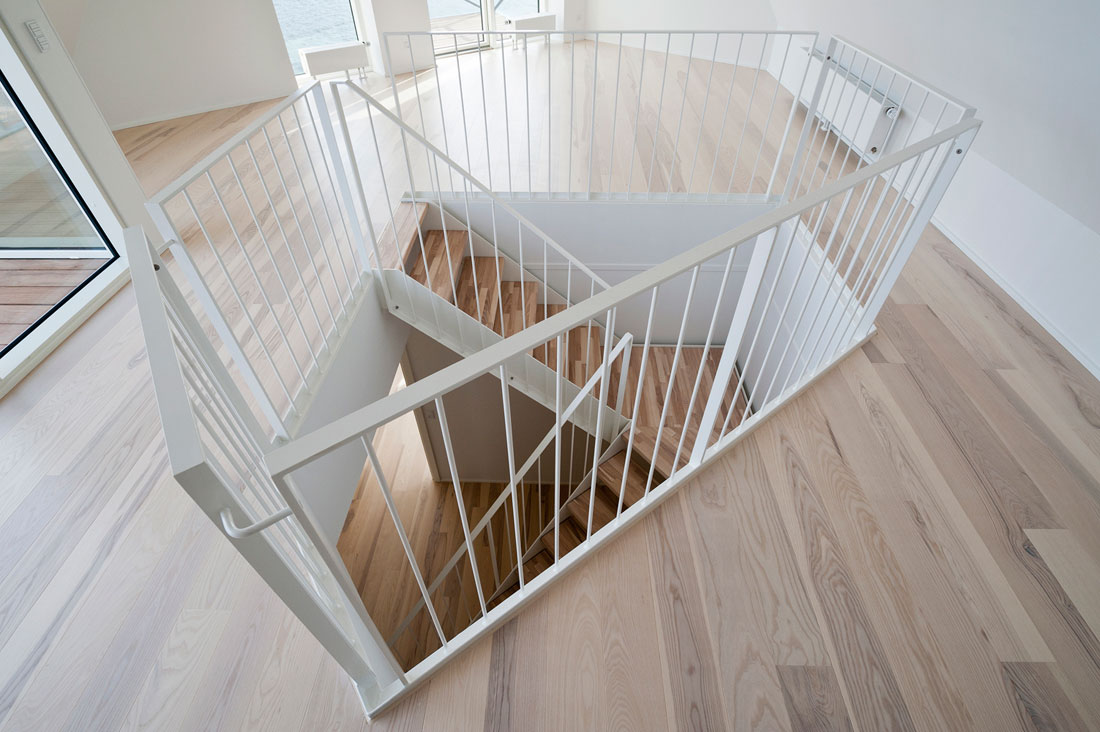 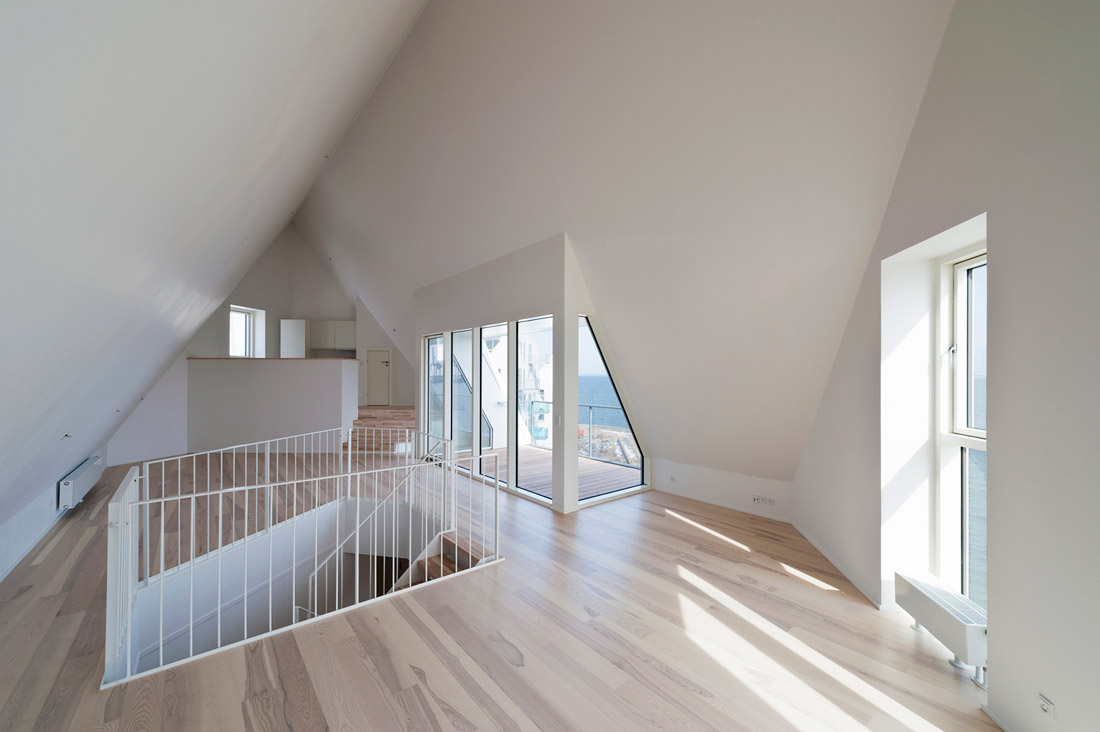