Researchers from ETH Zurich are using a new method for digital timber construction in a real project for the first time. The load-bearing timber modules, which are prefabricated by robots, will be assembled on the top two floors at the DFAB HOUSE construction site. The Spatial Timber Assemblies project combines architecture with robotics and craftsmanship. 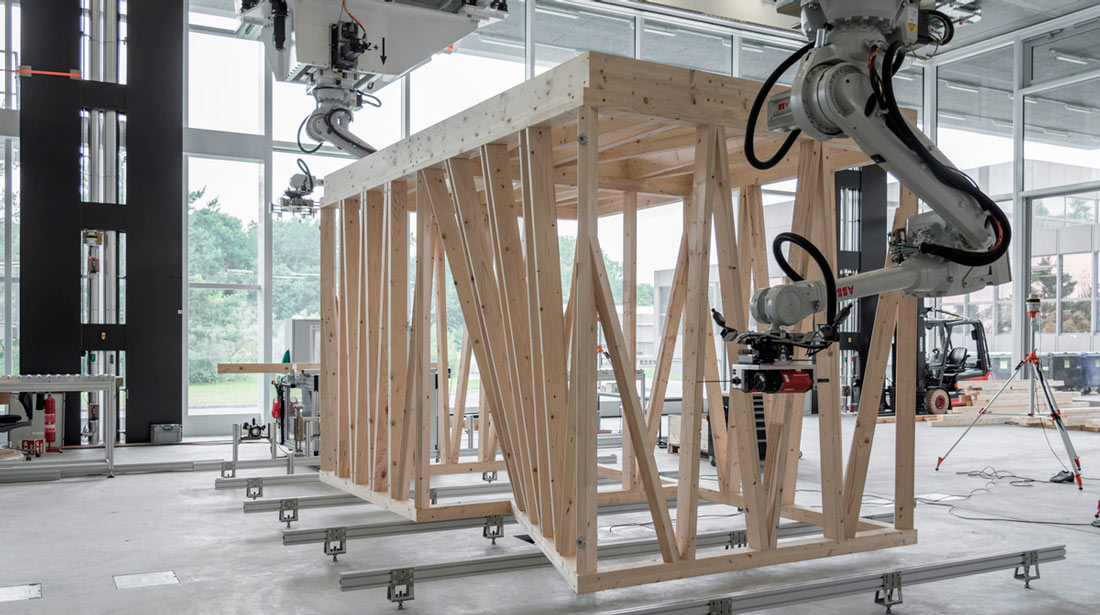 Digitalisation has found its way into timber construction, with entire elements already being fabricated by computer-aided systems. The raw material is cut to size by the machines, but in most cases it still has to be manually assembled to create a plane frame. In the past, this fabrication process came with many geometric restrictions. 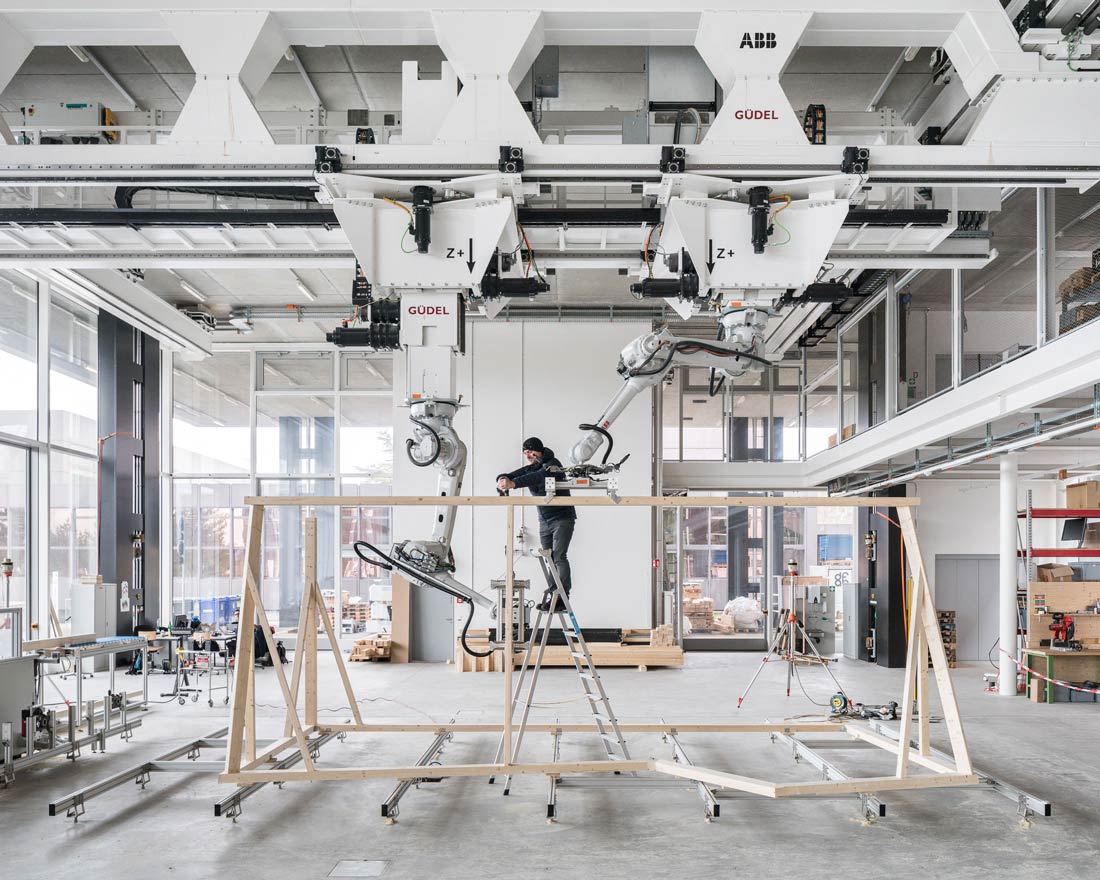 A project member manually bolts the timber beams together that have been jointly preplaced by the two robots. 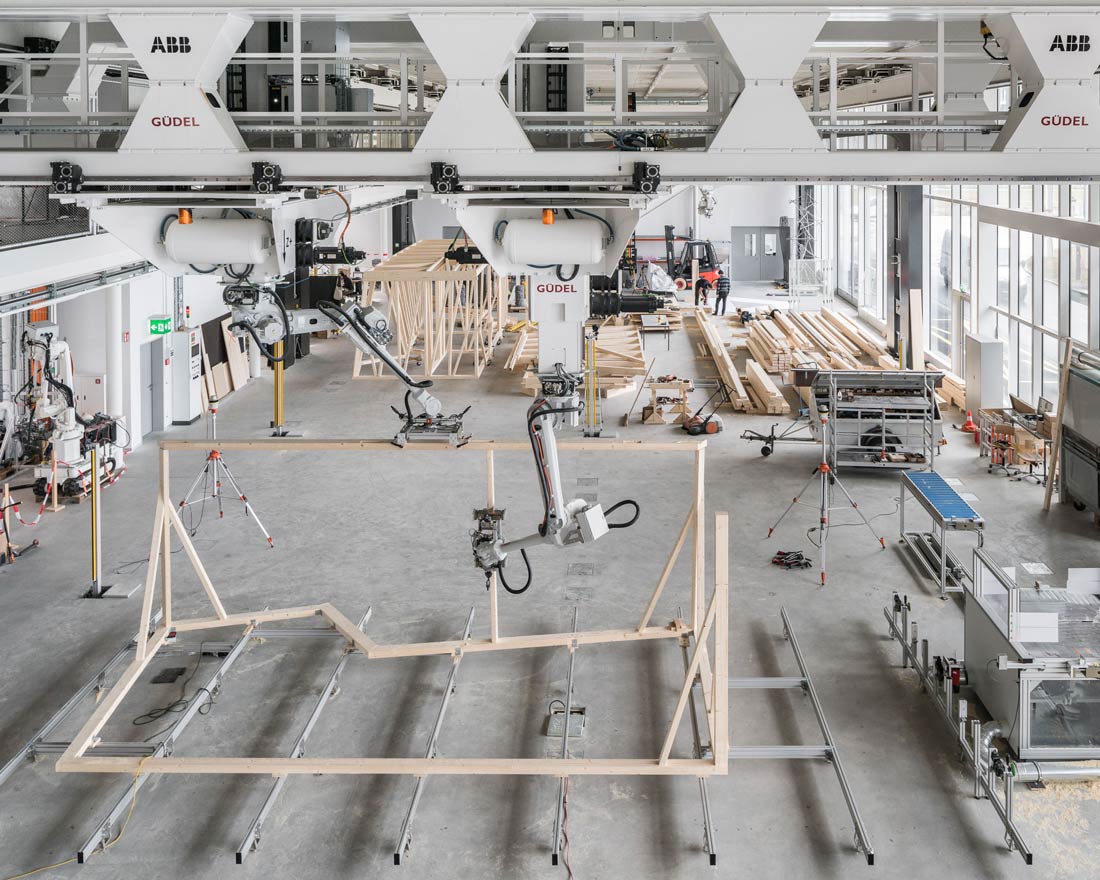 The Robotic Fabrication Laboratory of ETH Zurich is the world’s first research platform for large-scale robotic prefabrication in architecture.

Under the auspices of the National Centre of Competence in Research (NCCR) Digital Fabrication, researchers from ETH Zurich’s Chair of Architecture and Digital Fabrication have developed a new, digital timber construction method that expands the range of possibilities for traditional timber frame construction by enabling the efficient construction and assembly of geometrically complex timber mod-ules. Spatial Timber Assemblies evolved from a close collaboration with Erne AG Holzbau and will be used for the first time in the DFAB HOUSE project at the Empa and Eawag NEST research and innova-tion construction site in Dübendorf. It is also the first large-scale architectural project to use the construction robots developed by ETH Zurich’s new Robotic Fabrication Laboratory. 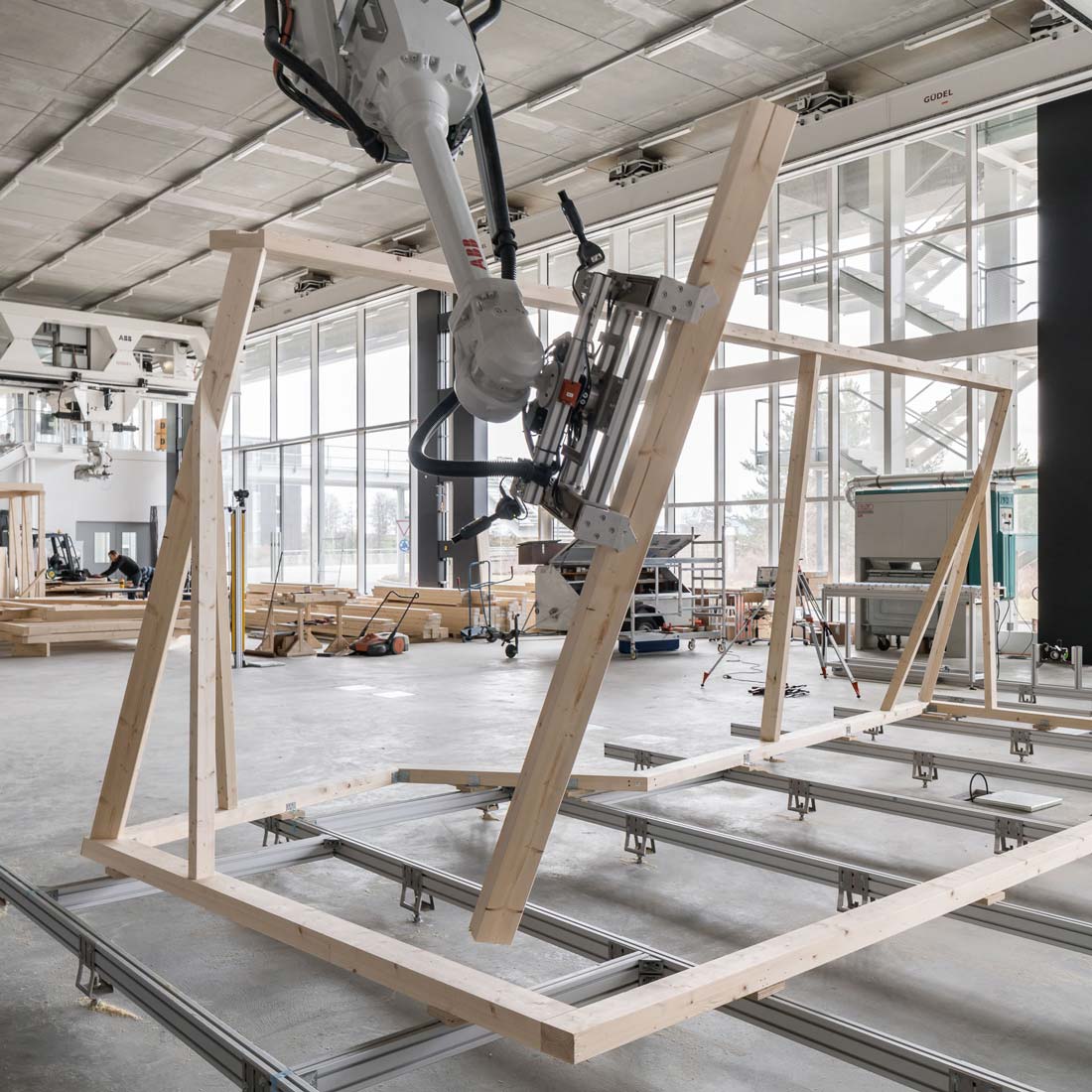 Highly precise robotic positioning of a timber beam according to the computational design.

The robot first takes a timber beam and guides it while it is sawed to size. After an automatic tool change, a second robot drills the required holes for connecting the beams. In the final step, the two robots work together and position the beams in the precise spatial arrangement based on the computer layout. To prevent collisions when positioning the individual timber beams, the researchers have developed an algorithm that constantly recalculates the path of motion for the robots according to the current state of construction. Workers then manually bolt the beams together. 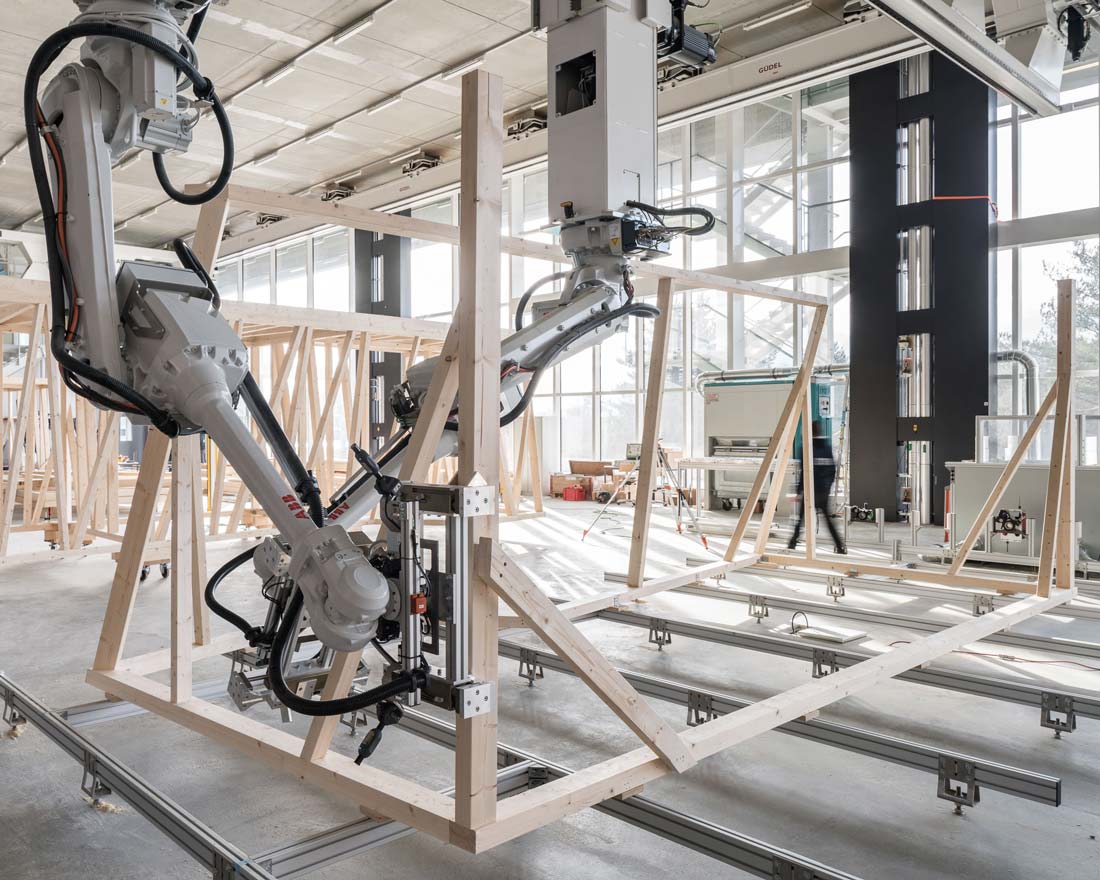 The two cooperating robots precisely position the timber beams in the spatial arrangement predefined by the computational design without colliding.

Unlike traditional timber frame construction, Spatial Timber Assemblies can manage without reinforce-ment plates because the required rigidity and load-bearing result from the geometric structure. Not only does this save material; it also opens up new creative possibilities. A total of six spatial, geometrically unique timber modules will be prefabricated in this way for the first time. Lorries will then transport them to the DFAB HOUSE construction site at the NEST in Dübendorf, where they will be joined to build a two-storey residential unit with more than 100 m2 of floor space. The complex geometry of the timber construction will remain visible behind a transparent membrane façade. 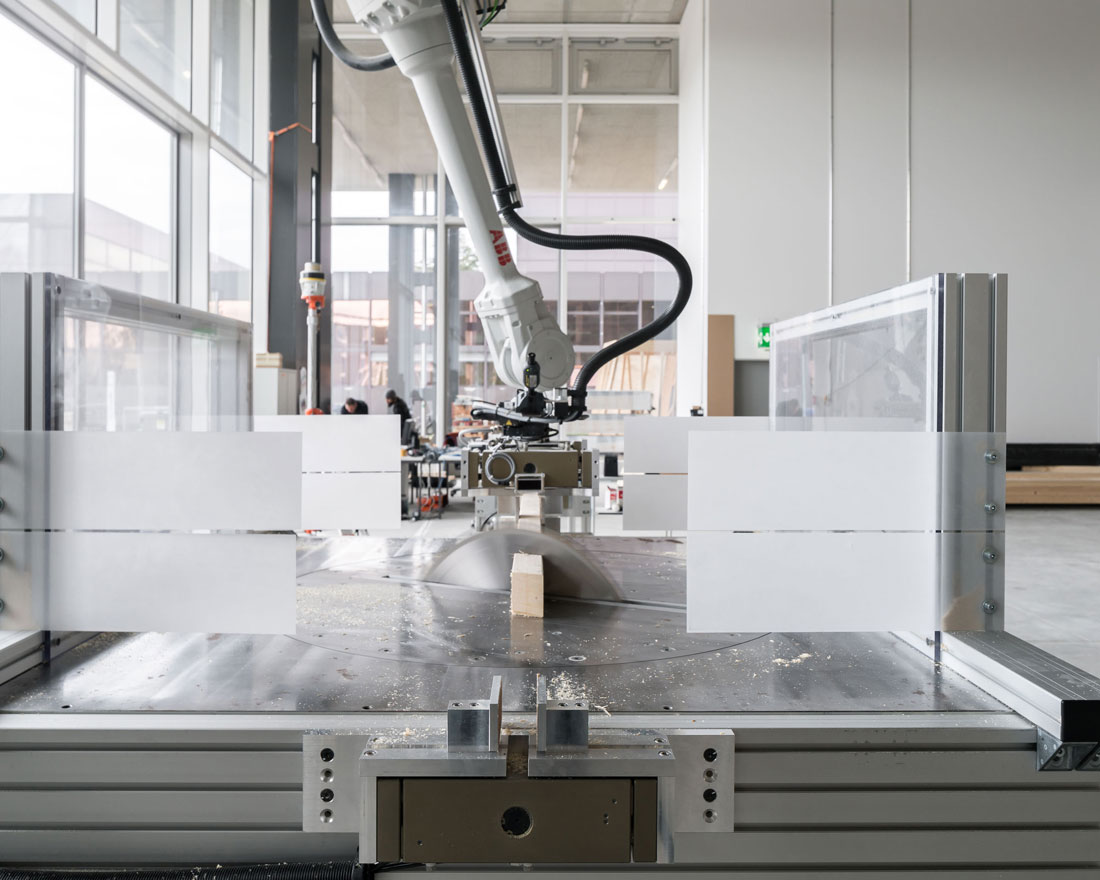 One of the robots taking a timber beam to the saw in order for it to be cut to size.

The robots use information from a computer-aided design model to cut and arrange the timber beams. This method was specially developed during the project and uses various input parameters to create a geometry consisting of 487 timber beams in total.

The fact that Spatial Timber Assemblies is being used for digital fabrication and also in design and planning offers a major advantage according to Matthias Kohler, Professor of Architecture and Digital Fabrication at ETH Zurich and the man spearheading the DFAB HOUSE project: “If any change is made to the project overall, the computer model can be constantly adjusted to meet the new requirements. This kind of integrated digital architecture is closing the gap between design, planning and execution.” 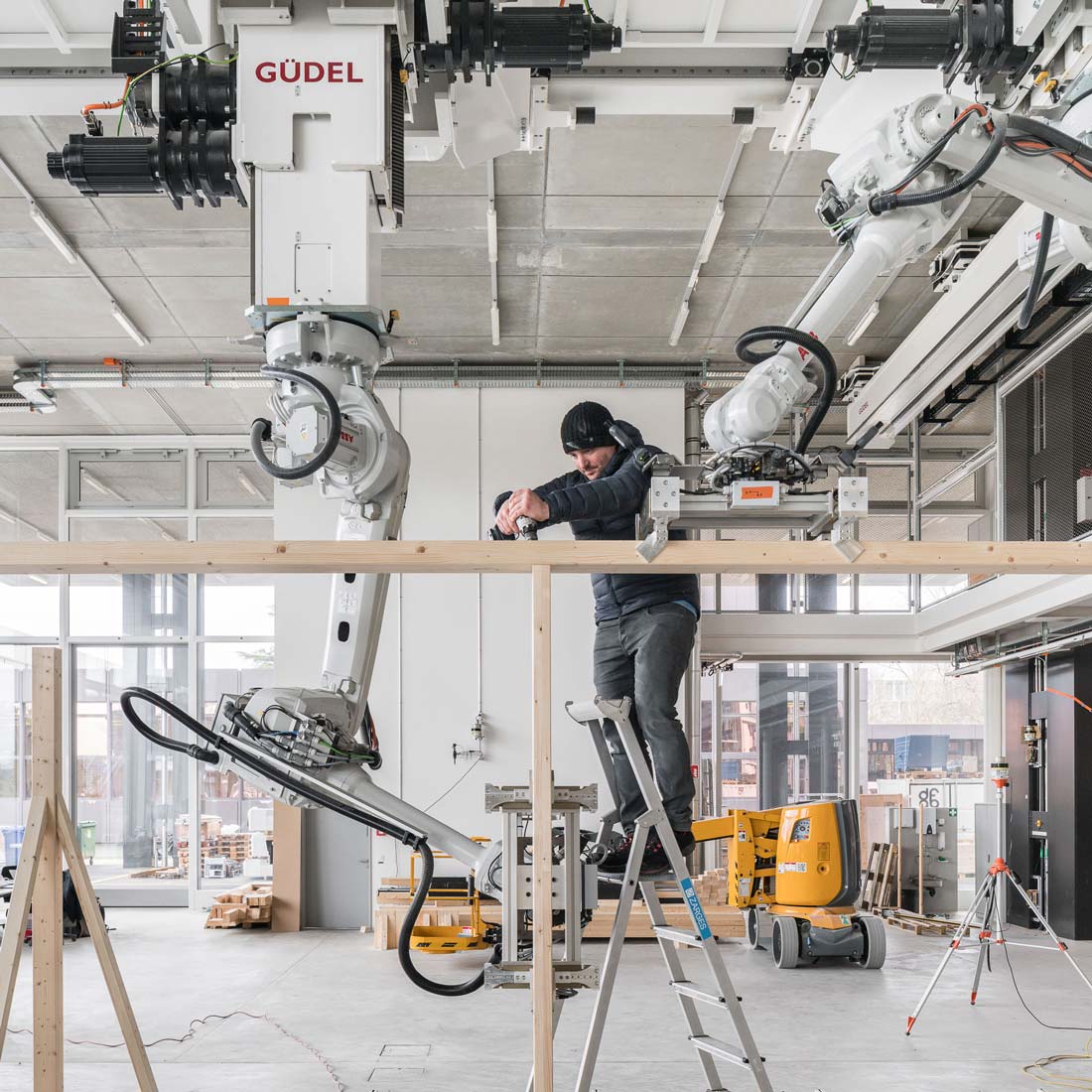 A successful concept for sharing knowledge

ETH Zurich has already completed a successful collaboration with Erne AG Holzbau on the robot-built timber roof of the Arch_Tech_Lab at the Hönggerberg campus. Thanks to Spatial Timber Assemblies, the company’s expertise in timber construction will make yet another contribution to ETH research.

Kohler believes in the synergy effect brought about by the partnership: “Digital fabrication depends on the tremendous expertise required for craftsmanship. Conversely, digitalisation can improve craftsman-ship and open up new opportunities.” Kohler also says the fact that scientific disciplines go hand in hand with industry is essential if technologies are to be used in real architectural projects after such a brief time. 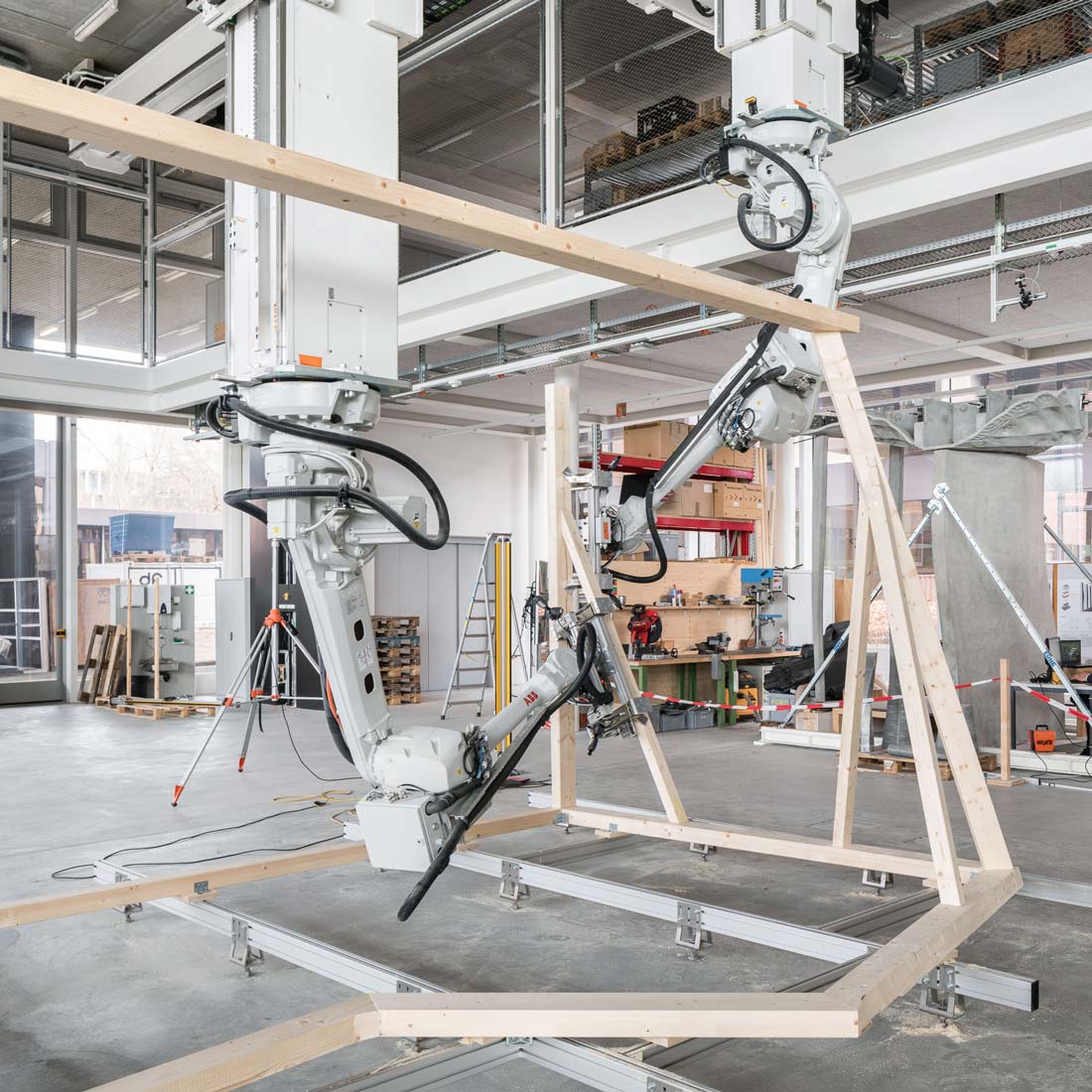 Eight ETH Zurich professors are working together with industrial partners to build DFAB HOUSE, a three-storey residential unit that is part of Empa and Eawag’s NEST research and innovation plat-form in Dübendorf. The fabrication of the mesh mould wall in May 2017 was the starting shot for the world’s first building to combine multiple innovative digital construction processes under a sin-gle roof. Since then, two other digitally designed and fabricated building components were made ready for production and coordinated digitally within the overall project. The automated Smart Dy-namic Casting coordination system has already been used at ETH to prefabricate concrete façade posts designed specifically for the loading conditions of the building’s glass façade. A so-called “smart slab”, a statically optimized concrete floor slab, is currently in pre-production. Researchers are using large-format 3D sand printing for its formwork. By bringing these elements together with Spatial Timber Assemblies, a unique combination was materialised at DFAB HOUSE – have a look at the project here.

Computer generated visualisation of the DFAB HOUSE on the modular research and inno-vation building NEST of Empa and Eawag in Dübendorf.