Since Art Historian Ragnar Josephson started to gather an archive documenting the artistic process about 80 years ago, Skissernas Musuem, Museum of Artistic Process and Public Art, has gradually grown to a large cluster of buildings that, apart from housing the world’s largest collection of sketches, is an important carrier of the identity of the Museum. This is the first extension in the museum’s history that solely addresses its interface, with foyer, restaurant, shop and a multi-purpose hall. 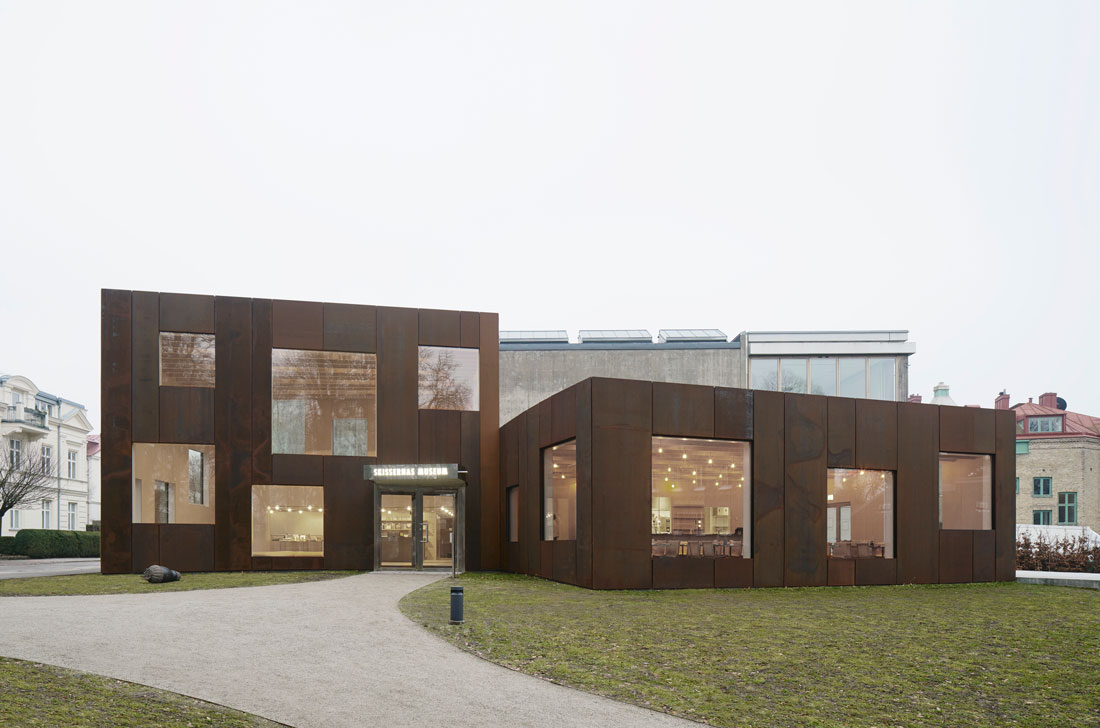 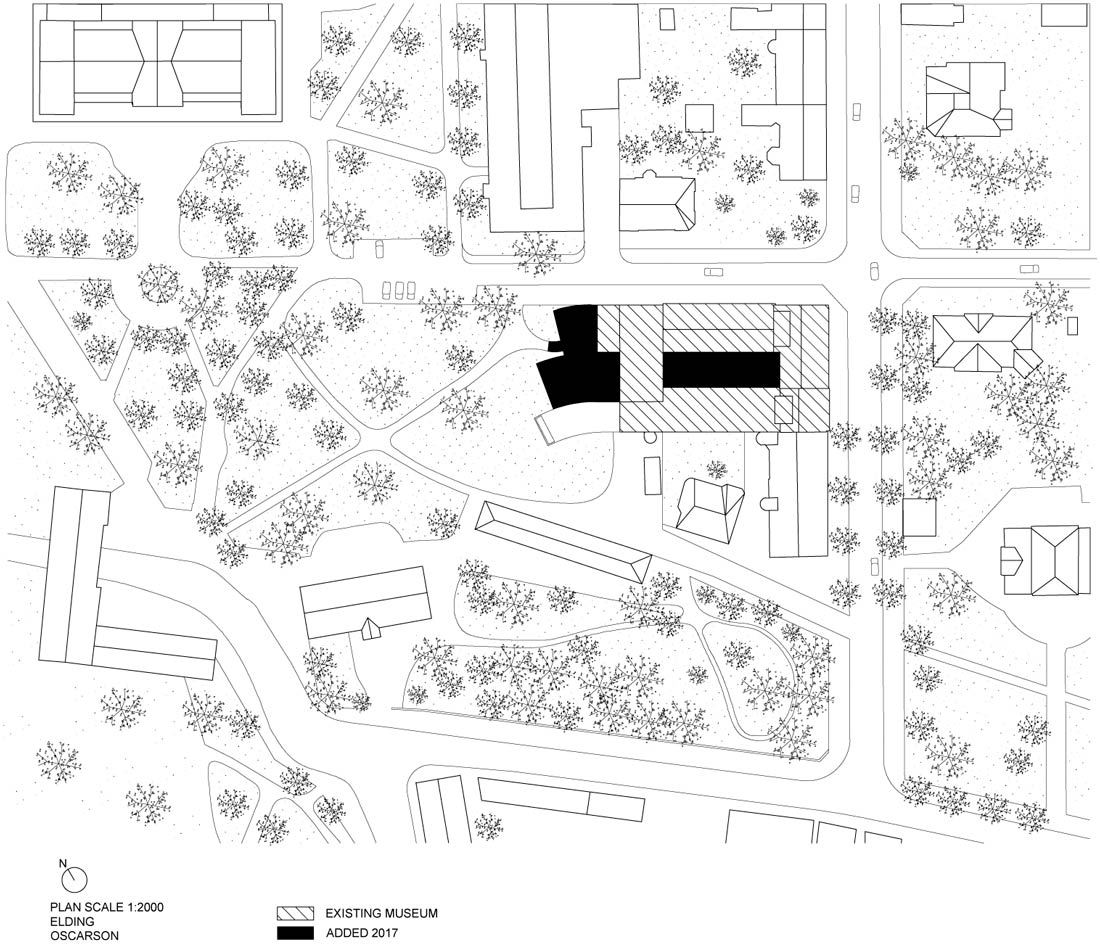 The new addition of slightly bent volumes projects into the existing sculpture park, releasing its grip on the street grid and instead latching on to the diagonal approach through the park. This is the axis of entrance that the large extension from 1959, by architect Hans Westman, was designed for. The new foyer space is very tall to take in both this existing board formed concrete volume and the tall trees in the park, but also to be able to stand up next to the rather massive existing museum volumes. The new restaurant, however, draws on respect for a more recent addition from 2005, by architect Johan Celsing, and is kept low so as not to intervene with the previous extension’s large window facing the park. The original entrance volume from 1959 becomes integrated as a shop and reception. 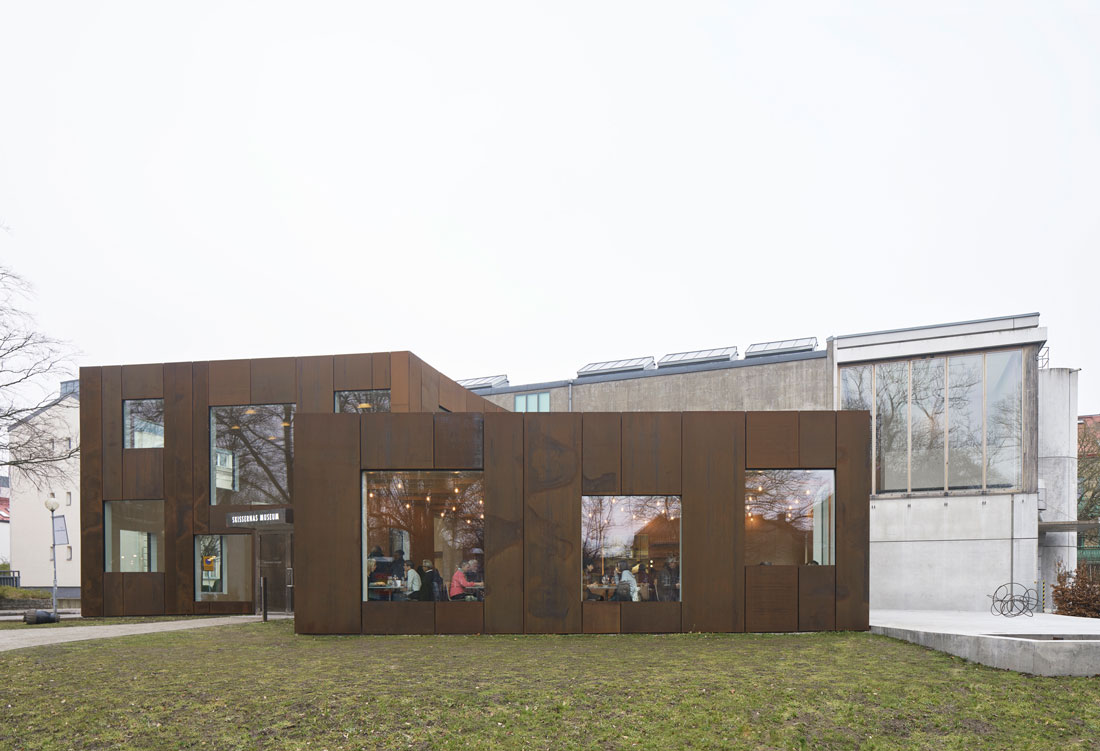 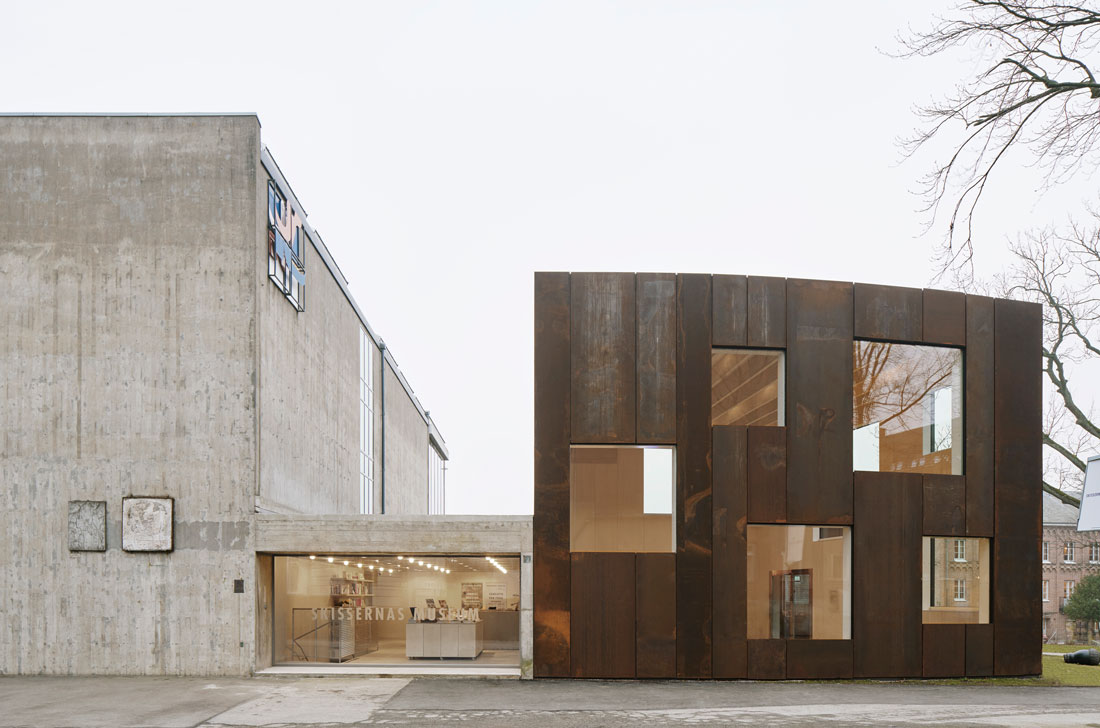 The corten steel, favored by sculptors ever since the material was invented, handles the adjacent historic red brick architecture as well as the rough materiality of the existing concrete volume, yet contrasts to these with the potential of sharp detailing inherent in a panel material. The free arrangement of the façades is composed carefully to get particular views from, into, and through the added building volumes – to reach a transparency without an actual large surface of glass. 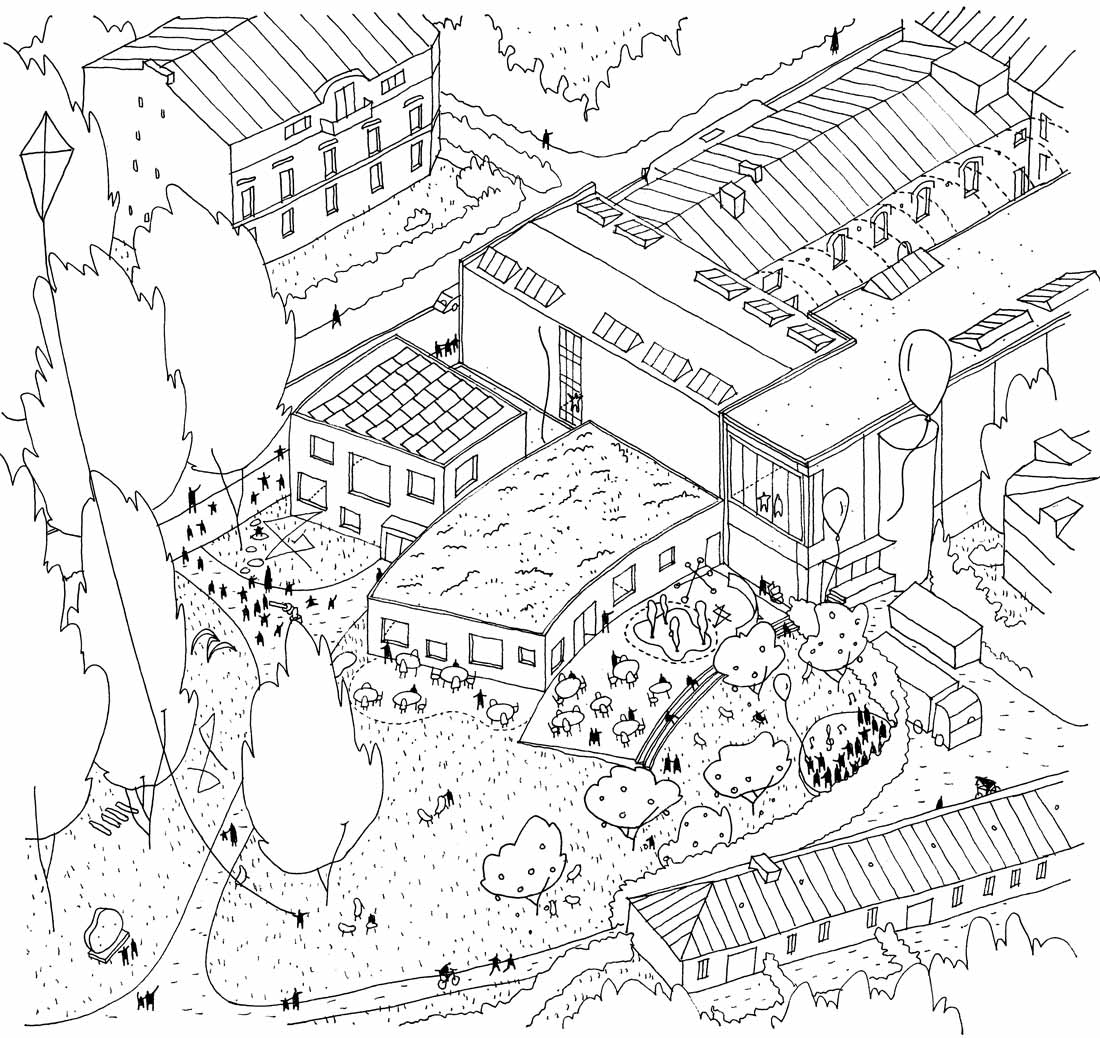 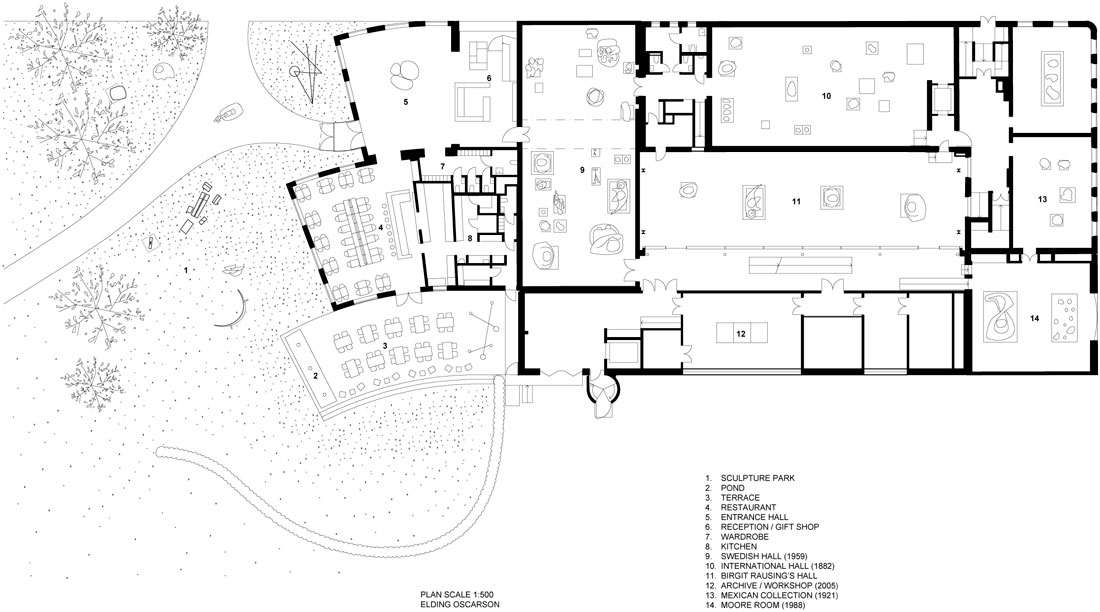 As for the multi-function hall in the existing inner courtyard of the museum, a great variation in height of the surrounding buildings and a problem of how to support loads in the underlying structure – as well as a desire not to disturb the existing façades around the courtyard – led to a solution with a roof soaring high, resting on four columns, and surrounded by clerestorial light. The roof spans 27 meters and its ceiling is a hovering plate of mirroring aluminum, all intended to achieve a spatial experience that is not entirely indoor, but rather maintains some of the character of an open inner courtyard. 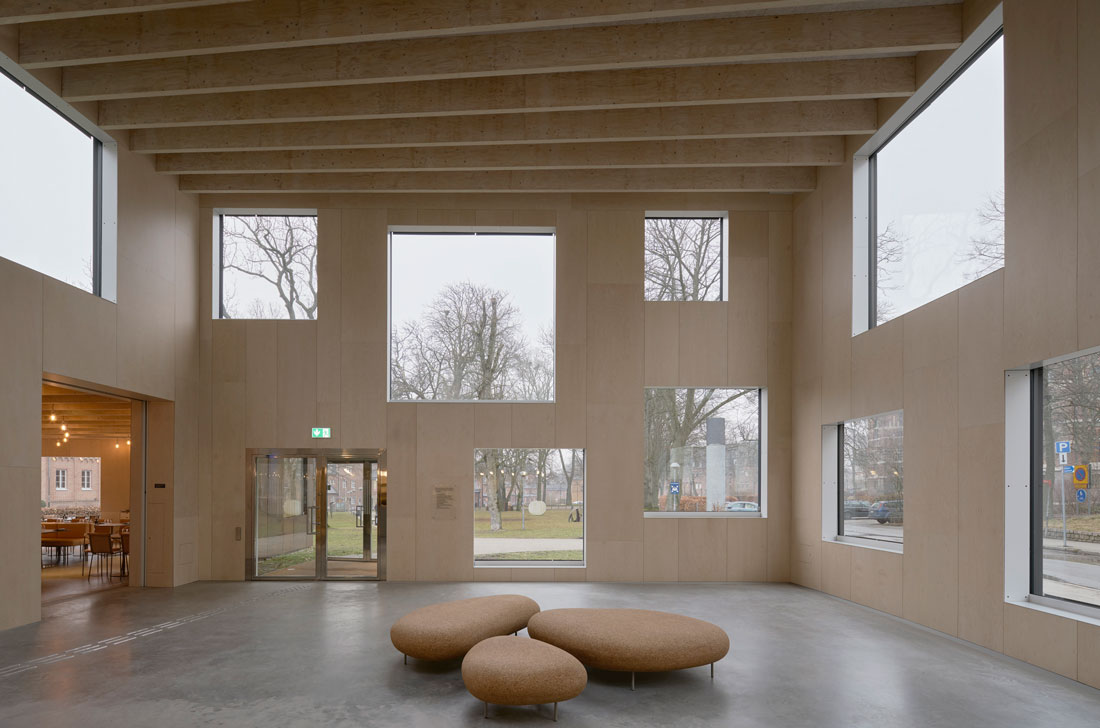 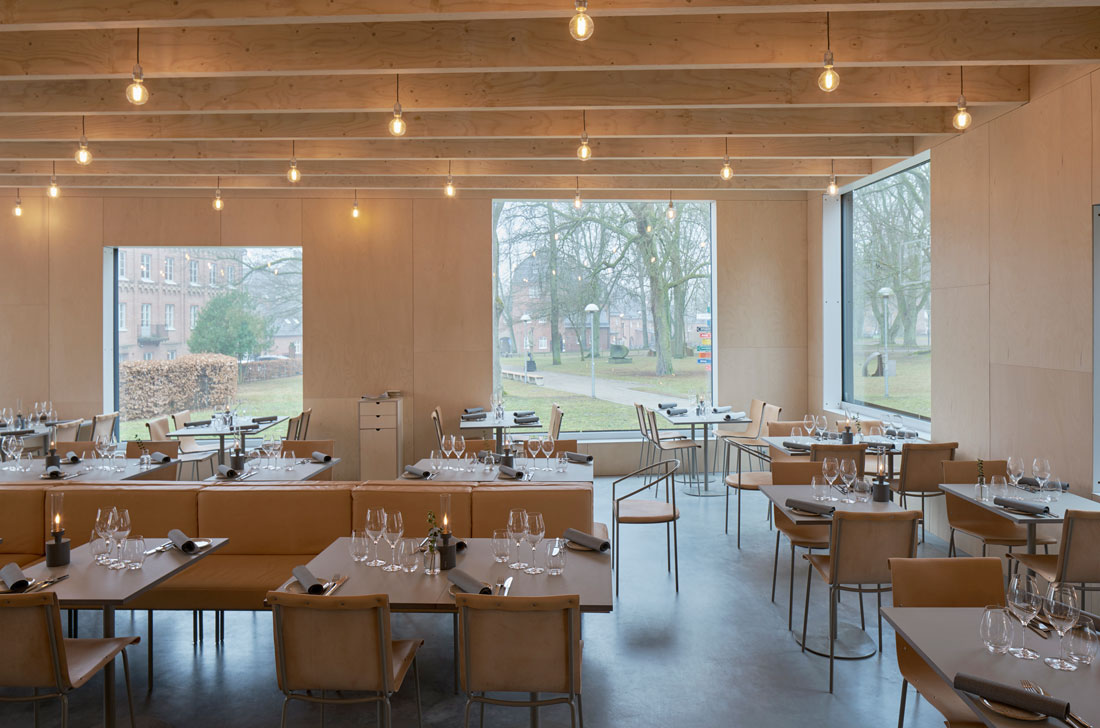 The furniture of the restaurant, foyer, and shop were all designed by Elding Oscarson, and they deliberately transmit the unfinished character of a sketch, or prototype. Overall, the intention is for the new addition to add a valuable experience of architecture within the park, as the Museum gets an updated interface, becoming a more functional place for people to meet.