Saraceno’s Model of Models: The Magnificence of Aerocene

Tomás Saraceno’s Aerocene is astonishing for many reasons. Foremost is the degree to which his experiment manifests the salient principle of thermodynamics as the motor of its operation: the universe abhors a gradient.[1] What is so cunning and breath-taking about this project, though, is how it deploys this principle. It projects the work of habitation and mobility aloft in the most abundant but lowest quality gradients on the planet: the dynamics of aero-solar exergy gradients in the atmosphere.[2] 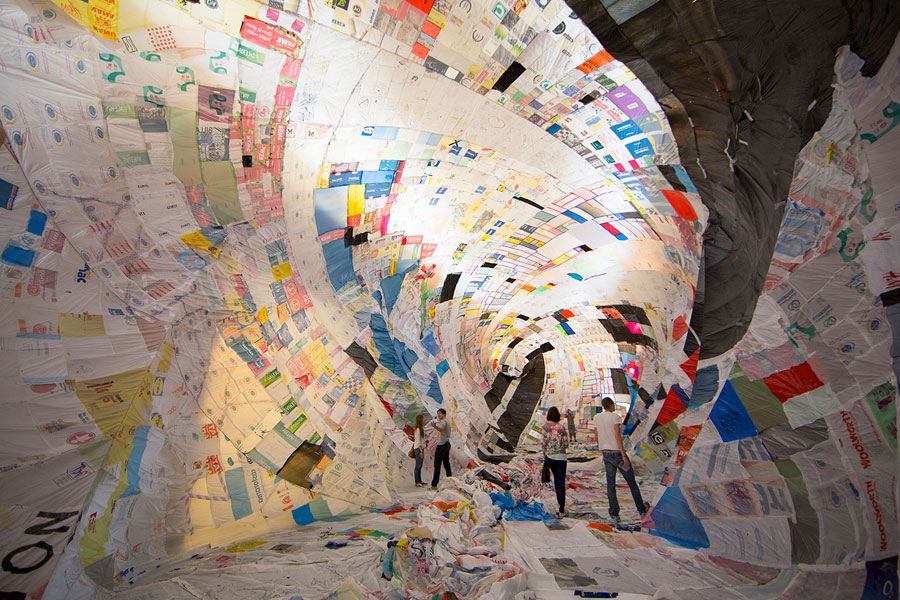 [1] A gradient is an energetic difference. The universe tends to obliterate such difference, seeking an equilibrium it will never achieve. For all intents and purposes here, we live in constitutionally open and coupled systems. All forms in the universe can be understood as emerging from constitutionally open and coupled dynamics. [2] Upon initial inspection, Aerocene seems to exploit the subtle thermal gradient on each side of Saraceno’s plastic bags. Further examination will reveal not only sensible heat gradients but latent heat gradients, boundary-layer fluid dynamics, and humidity all driving the pressure differences which produce the relevant buoyancy in this case. [3] Thermodynamic depth refers to the degree of coupled subsystems in a thermodynamic system. [4] It might well be that art and architecture finally come to learn the profound difference between form and formation in this century. [5] Radiative forcing dynamics are what otherwise are characterized as climate change. The “climate change” characterization over-simplifies the topic and fetishizes carbon as the sole culprit. This occludes matters of theoretical, practical and political significance. The reality of radiative forcing dynamics provides a more varied and valid conception of how we might best design in this century. [6] Every day, in every task, in every thought, the cosmopolitan twenty-first century citizen might well inquire, what is the appropriate system boundary at hand, and why? [7] Humans collectively utilize about 16.5 terrawatts of exergy annually. The incoming exergy is on the order of magnitude of 165,000 terrawatts. It is difficult to construe an exergetic scarcity here, but rather only a scarcity of valid models, like Saraceno’s, for how to best squander this superabundance. [8] A model is at once a unique object and an example of a world-view. Every physical object carries with it an entire view of the world. Ideally, an exemplary model would be both an exemplary object and afford an exemplary view of the world. Such models are rare. The Pantheon in Rome is one, Aerocene appears to be analogous. [9] Any system will be open, closed, or isolated. The difference gauges the type of exchange, or lack of, amongst the system and its surroundings. Intimidated by vitality-inducing complexity, modernity tended to prefer the reassuring comforts of isolated models. Oops. [10] In this sense, it would be suffice to discuss the state of any system or model. [11] Above the cobblestones, the air! [12] What causes something to appear the way it does?

Energy and sustainability | Essay | No Density | Technology and fabrication