This research is an excerpt of Terra-Sorta-Firma by Fadi Masoud, published by Actar Publishers

Land reclamation has been a part of urban expansion and transformation for centuries. In most cases it was deemed a necessity and systematically linked to broader hydrological and infrastructural networks in other, more recent cases it is a speculative real-estate practice that results in outlandish formal schemes. The Atlas showcases projects or districts from a diverse global and historical perspective. The Atlas illustrates the progression of each site, and traces it back from its current condition to its original hydrological state (pre-infill), highlighting each district’s socio-economic, architectural, infrastructural, and cultural contexts.

As the only large settlement in the Maldives, a nation comprised of 28 natural atolls and 1194 islands, Malé plays a critical role in the national economy. It developed as a strategic trading location along trading routes between the Middle East and south Asia, providing a main source of cowrie shells – an ancient currency – and served as the seat of Maldivian ruling dynasties. After Maldives gained independence from colonial powers in 1965, much of the historic city fabric was demolished and the monarchy abolished. Since then, pressures from tourism and an expanding economy have resulted in the maximal expansion of Malé and its airport over their respective reefs. Today, as one of the poorest and densest cities in the world, Malé has embarked on the large-scale reclamation of Hulhule and Hulhumalé Islands to further expand its airport and address the contemporary challenges of housing, industry, and rising ocean levels. The country, which has a maximum elevation of 2.4 metres, is the lowest in the world. 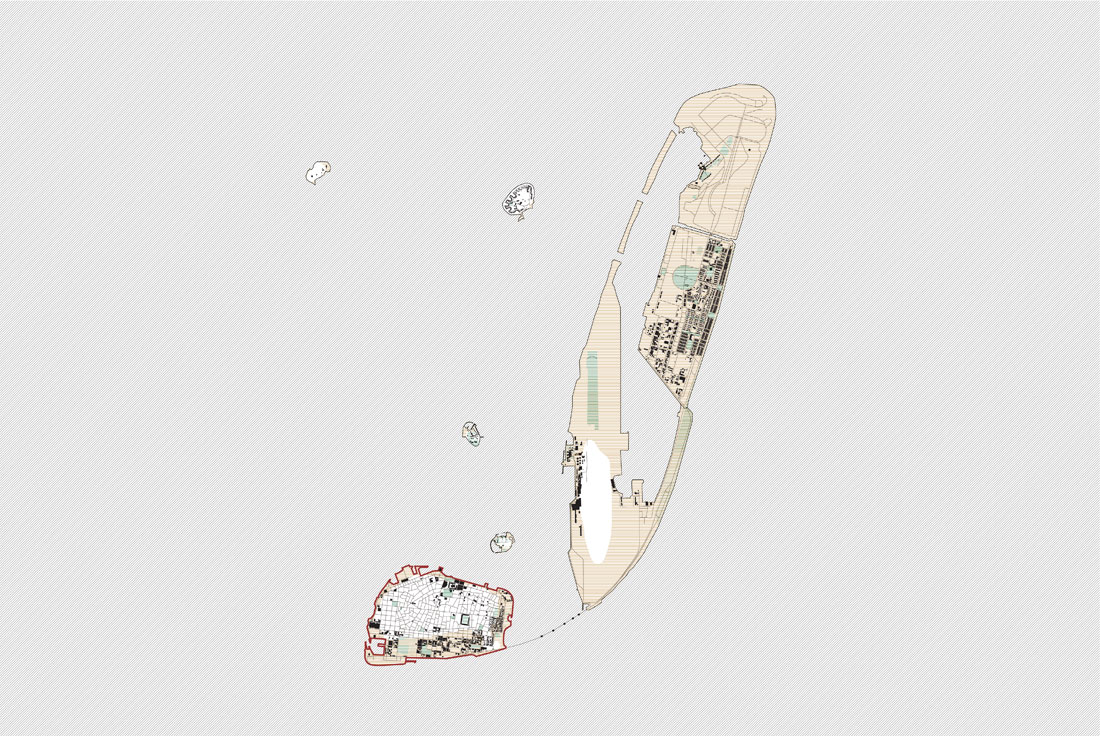 During the 16th and 17th centuries, Amsterdam emerged as a major centre of international trade and the seat of a powerful new merchant class. Over the following two centuries, as a result of improved windmill and water pumping technologies, private investors from this wealthy merchant class began draining peat lakes across the Netherlands to create leasable land over which they could acquire lordship. The first of these projects was De Beemster, a large peat lake in North Holland, drained by a group of 123 private investors from Amsterdam and the Hague between 1609 and 1612. The polder, which was drained using four tiers of forty-three terraced windmills, created 207 new farms and over 50 lavish new estates on nutrient rich peat soil below sea level. Still an agricultural landscape, the Beemster polder has remained largely intact for over 400 years and is now a UNESCO world heritage site. Water is continually pumped out of the polder to prevent flooding. 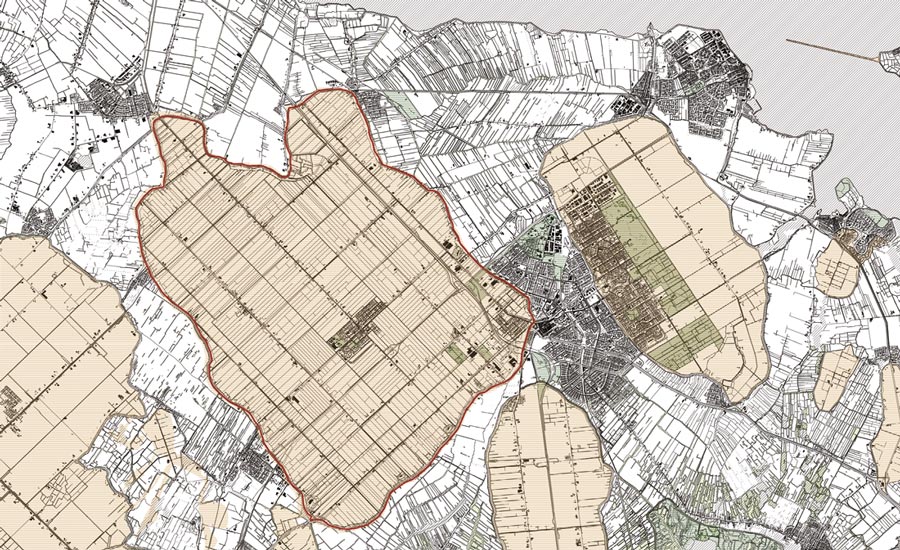 Steep slopes and limited developable land within its territorial geography have historically driven the extension of Hong Kong’s shoreline. Land reclamation projects can be traced back as early as 206 BCE where beaches were reclaimed into fields for salt production. Inland reclamation occurred when early settlers from Mainland China opened a river valley for the purposes of rice cultivation. Today, approximately 40% of the developed land in the city is on reclaimed land, with land uses ranging from residential, commercial, industrial, and recreation. Hong Kong’s Victoria Harbour, an active and busy fairway for marine transportation, experiences an increase in accident rates for sea navigation due to the increase in wave effects caused by the continued expansion of land into the harbour. Hong Kong International Airport covers an area of 13 km2 of reclaimed land formed by connecting Chek Lap Kok and Lam Chau islands. 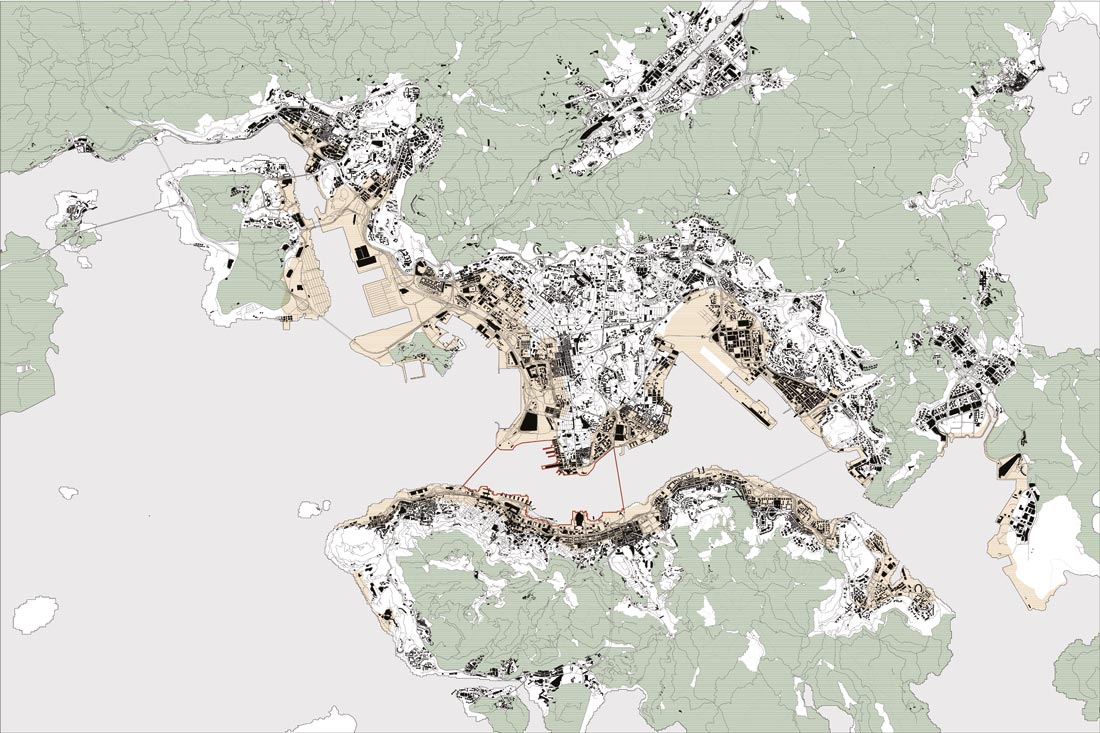 Founded in 1718, “La Nouvelle-Orleans” was established by the French along the fertile banks of the Mississippi River.
Here, sedimentation from the Mississippi created natural levees suitable for construction and agriculture. As the city grew, surrounding swamplands were drained for urban and agricultural expansion, as well as for easier transport of goods and troops between Lake Pontchartrain to the north and the Mississippi River. At this time, numerous drainage canals and artificial levees were constructed to protect the young city from regular flooding from the Mississippi, and many early buildings were constructed several feet above ground on natural embankments. Early reports and mappings indicate the city was historically ravaged by several severe hurricanes and periods of major inundation. Today, much of the city lies 2-10 feet below the level of Lake Pontchartrain, and despite modern flood control efforts, still suffers periodic destructive flooding. Most recently, Hurricane Katrina breached four levees and flooded 80% of the city. 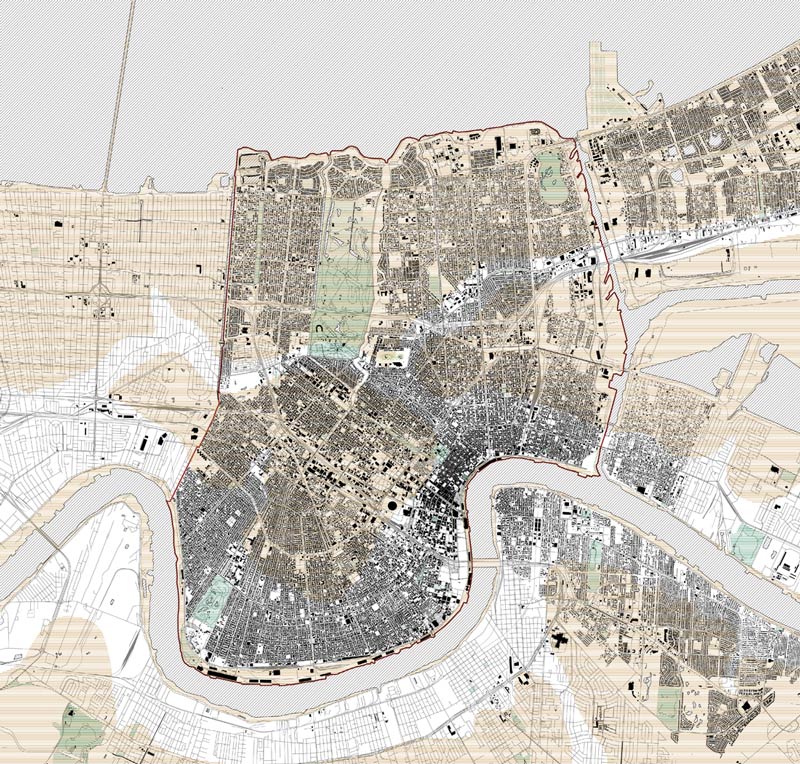 The Pearl-Qatar is an artificial island constructed off the West Bay Lagoon in Doha, south of the planned city of Lusail. It is the first land on Qatari soil that was made available for ownership by foreign nationals. The city is designed to contain 12,000 luxury residential units as well as commercial districts. The name for the project is derived from the area’s historical use as a major pearl diving site and is designed to resemble a string of pearls.
The island was created through the use of a 10,000 horsepower cutter-suction dredgers, which excavated soil, gravel, and rock from Persian Gulf. Approximately 15 million m3 of land has been excavated and reclaimed for the creation of the island. The development of The Pearl is said to preserve and enhance environmental conditions through the creation of new shorelines that provide opportunities for marine life to grow. 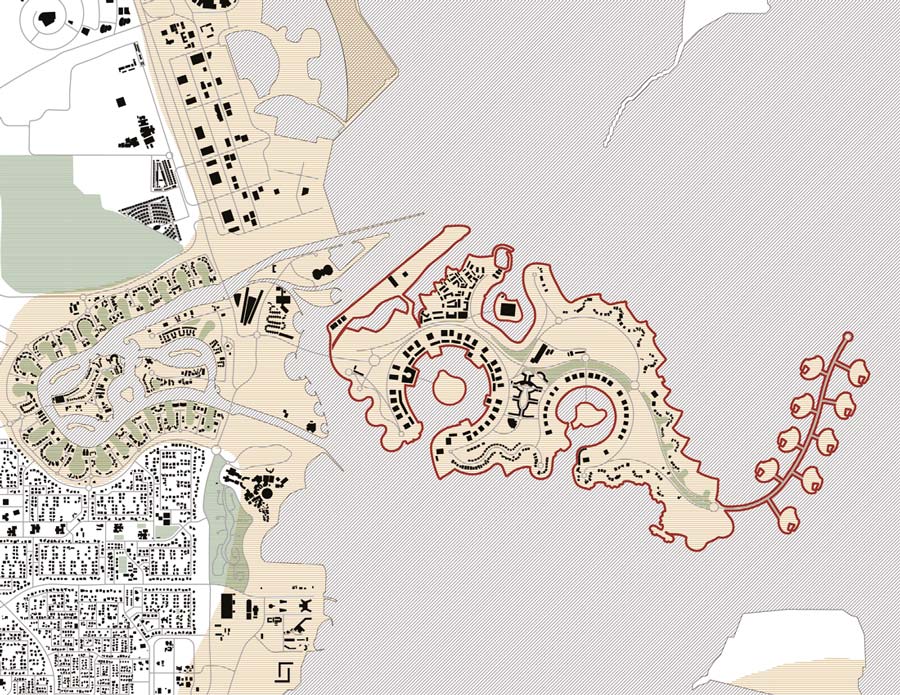 With a waterfront of 72 km, Dubai is the largest city in the UAE. It was established at the mouth of the Dubai Creek in the 1700s as a fishing and pearling village near the Persian Gulf. Unlike neighbouring Sheiks, the Sheik of Dubai encouraged trade, positioning Dubai as an important trading port in the early 1900s. In 1966, an offshore oil field was discovered off Dubai’s coast, bringing much wealth to the city. New oil revenues were invested into major infrastructure projects, including a new airport, luxury hotels, two ports, and an international free-trade zone. The resulting growth in commerce and tourism was explosive, catalyzing a number of largescale ocean reclamation projects to bring more beachfront to Dubai’s luxury real estate market. The palm islands, designed for beachfront maximization and cultural relevance, began in 2001 and are now iconic. Nonetheless, to date, only one such project has been completed (2011). The others, faced with erosion challenges, environmental concerns, and new financial uncertainties, remain unfinished. 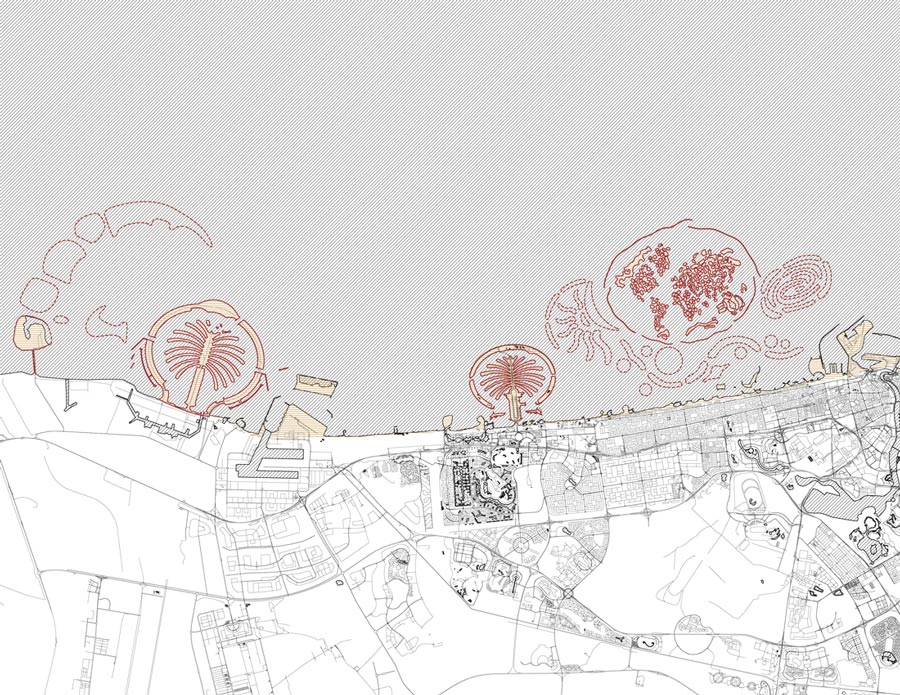 Originally one of the most productive wetlands of the Great Lakes, the marshes at the mouth of the Don River were rapidly degraded by the 1800s. Regular dumping of sewage, garbage, and livestock carcasses into the Don River transformed the marshlands into a source of stench and disease. At the beginning of the 20th century, with ambitions to transform the city into a major deep water port, the new Toronto Harbour Commission initiated its Port Lands Reclamation Project. This saw the marsh and adjacent islands reclaimed, stabilized, and reconfigured and connected to ship docks and rail lands also built on fill south of Front Street. The Commission’s ambition for a thriving port, was never realized however, its breakwater, the Leslie Street Spit is now considered one of the Great Lakes most ecologically sensitive aress. Today, the Portlands and the rest of the waterfront, is the site of major redevelopment centered around the restoration of the mouth of the Don River. Waterfront Toronto is mandated with the transformation of 800 hectares of brownfield lands. The agency is leading the redevelopment with landscape and design excellence , as well as advocating for innovation, resilience, and robust public engagment. The project is one of the largest waterfront redevelopment initiatives ever undertaken in the world. 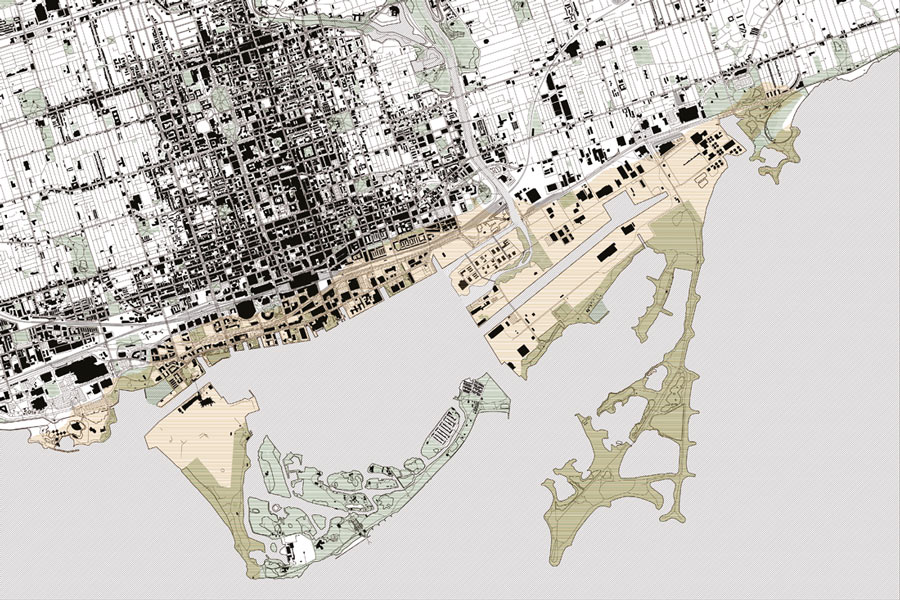 Following the city’s re-establishment as Norway’s capital in 1814, Christiania grew substantially, particularly during world war years. During this time, the waterfront was expanded to create more land for wharves, industry, rail, and highways. Today, development pressures have forced Oslo to redevelop its reclaimed port districts into mixed-use extensions of the downtown. Accordingly, Aker Brygge, a former shipyard, and Sørenga, a former container dock, were transformed in the 1980s and 2010s respectively into trendy residential and shopping districts, the latter resulting from Oslo’s 2000 Fjord City Masterplan. Today, a park directly adjacent to Sørenga celebrates the original site of Oslo and its historic shoreline.
Both districts are popular destinations in Oslo, and have invested heavily in sustianability measures as well as robust public open space masterplans. 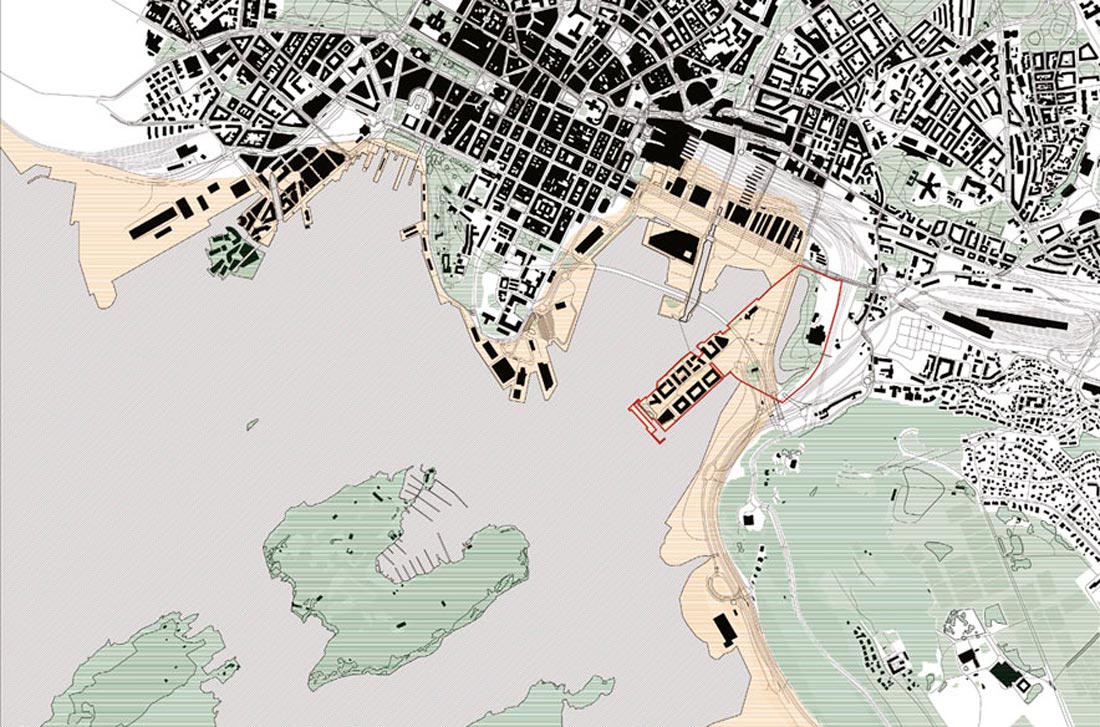 Originally the largest alluvial plain in Japan’s Kinki region, the large flat area upon which Osaka sits was created by the sedimentation of several rivers, namely the Yodo River. As early as the sixth century BC, rice farming along the Yodo plains became popular, and the settlement soon gained high economic and political importance. By the third century AD, Osaka had become a major hub for maritime trade in Japan, and despite shifting political priorities in the region throughout history, has retained this function until today. In 1868, the port was opened to foreign trade, and was provided significant funding to modernize its facilities shortly thereafter. During World War II, however, following years of expansion and a booming shipping industry, much of the port was heavily damaged, and usage slowed considerably. Despite this, a reconstruction plan was developed in 1947 and numerous expansion and restructuring projects ensued in the following decades. Today, Osaka’s port is part of the second largest urban-industrial zone in Japan. 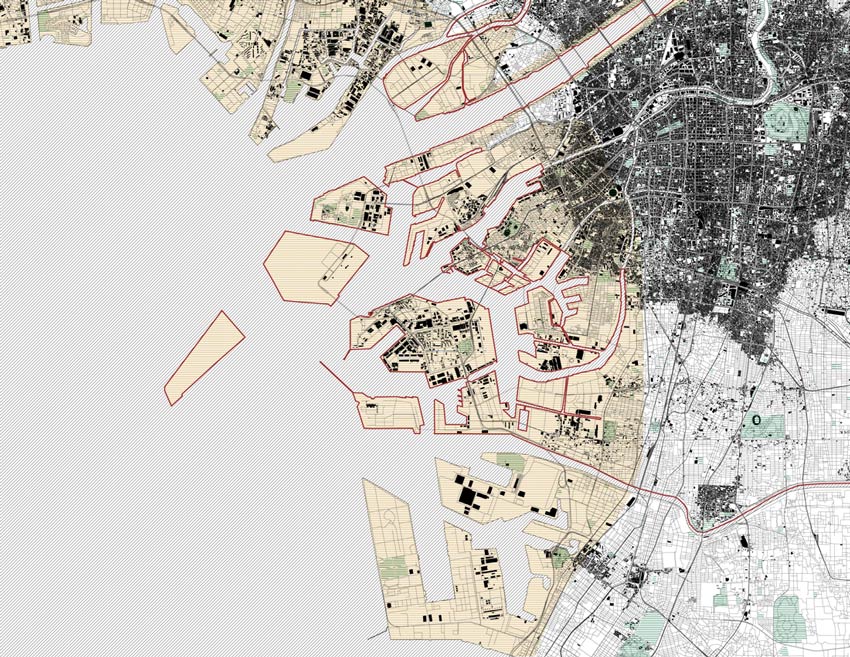 Located on Zwijn Estuary, Bruges was a landing area for seafaring merchants as early as the 7th century AD. By the 12th century, Bruges obtained city status as the seat of the counts of Flanders, and with a monopoly on English wool, became a major hub of trade in Europe. As the Zwijn river channels silted up in the 1500s, the importance of Bruges as a maritime trade hub began to decline. It remained a sleepy medieval town until the late 1800s, when Belgium decided to construct a new outer port at Zeebrugge, along with a new inner port at Bruges and a canal to connect them. The port brought new trade, tourism, and industry opportunities to the city. Despite heavy damage in both world wars, the port continued to expand, particularly in the 1960s, to accommodate larger ships and new technologies. By the 1980s, the port had new outer port facilities for the reception of tourists and the handling of large cargo items. Today, the port is the foundation of Bruges tourist-based economy, with major reclamation projects planned to expand the port’s capacity 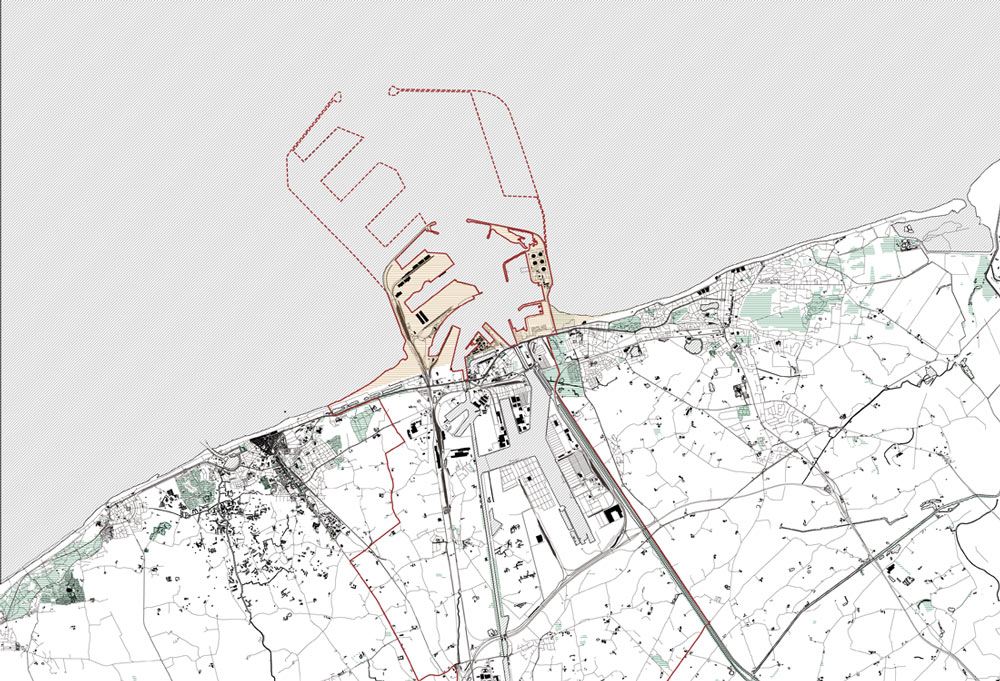