The deep-seated global transformation currently underway has challenged assumed notions of the relationships between people and their environments. Urban in character and based on everyday life observations and visual documentation, the images in this essay speak about the triggers of this transformation in New York City: namely the pandemic and social movements in 2020 after the lockdown was lifted. Taken close to the one-year anniversary, from this temporal vantage point these images are illustrative, not in a comprehensive way, but as a snapshot of the awakening to economic stress, psychological and cultural shock, and social justice. Overarching in tone and impact, this selection points at the complexity of a reckoning with established patterns, in many instances forced and prompted by the cultural transformation provoked by the pandemic and its concomitant repercussions, collectively phased.

The miasma of the pandemic generated an atmosphere that evolved from terror, sadness, acceptance, and unity. The quarantine reduced the vibrant character of the city’s outdoor spaces to an already uncanny atomistic existence inside the home. The consumption-led pseudo-public space of the city, and the everyday masks of symbolic interactions in a neoliberal society, already concentrated experience in the individual realm pre-pandemic. Officially extended and justified by a health threat and a disaster that dragged down the economy, staying home, remote work and instruction have become generalized indicators of the pandemic’s impacts globally. The remote and virtual habitus generated by globalization made that transition unequivocal, as digital platforms were an a priori already in place for the transition. The already blurry boundaries between public and private were further eroded. The management of safety and fear in public generated a fatigue dictated by a completely different set of decisions and considerations for otherwise-overwhelmed urban dwellers caught in a novel forced transition. 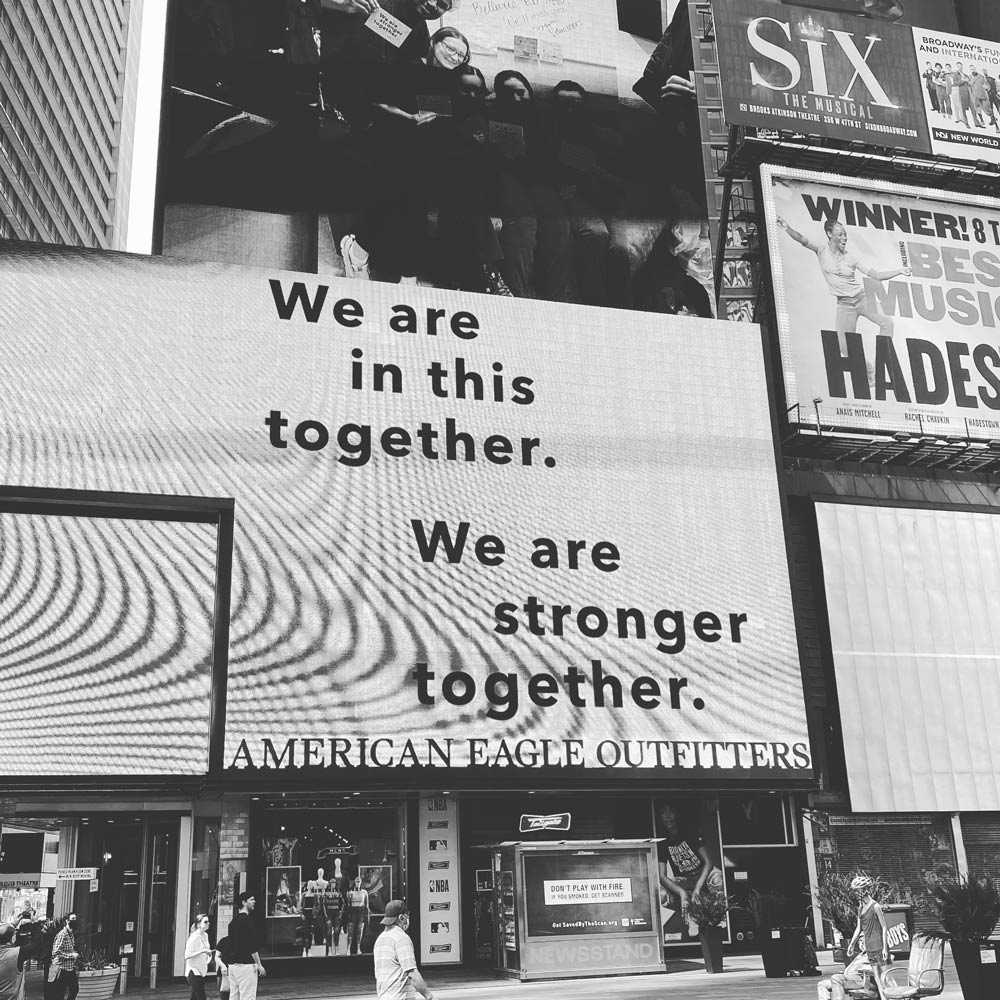 The observation of an increasing and convenient appropriation of a hit-and-miss pandemic policy implementation – which is still spotty, erratic, and shifting – resembles pre-pandemic urban development patterns. A desire for unity still lingers despite a misplaced divisiveness, fanned by a patriotic sentiment at the national level that consisted of rigid in-group thinking in a cultural arena of presumed differences. A collective mindset and perspective from the experience of the pandemic carries the overarching seduction of a common ground.

The pandemic has created an environment of multiple threats, from existential to economic, and even though they have been pushed to the back burner, concerns about climate change are still evident. Piercing through symbols of security, the experience of the pandemic has certainly shaken commonly held beliefs and produced an anxious culture. In my book Governing Disaster in Urban Environments: Climate Change Preparation and Adaption after Hurricane Sandy I argue for resiliency as the ability to face dramatic transformations triggered by extreme climate events based on adaptability and flexibility. The pandemic has made those skills emerge in a different context. For both climate change concerns, which have been slightly obscured by the impact of the pandemic, and the pandemic itself, a large degree of adaptability and flexibility are required. There is a common thread that runs through them and that has accelerated this dizzying reality of a transformative existence, addressed so eloquently and impactfully by Virilio (2005) in the notion of globalized velocity, which lagged during the pandemic. 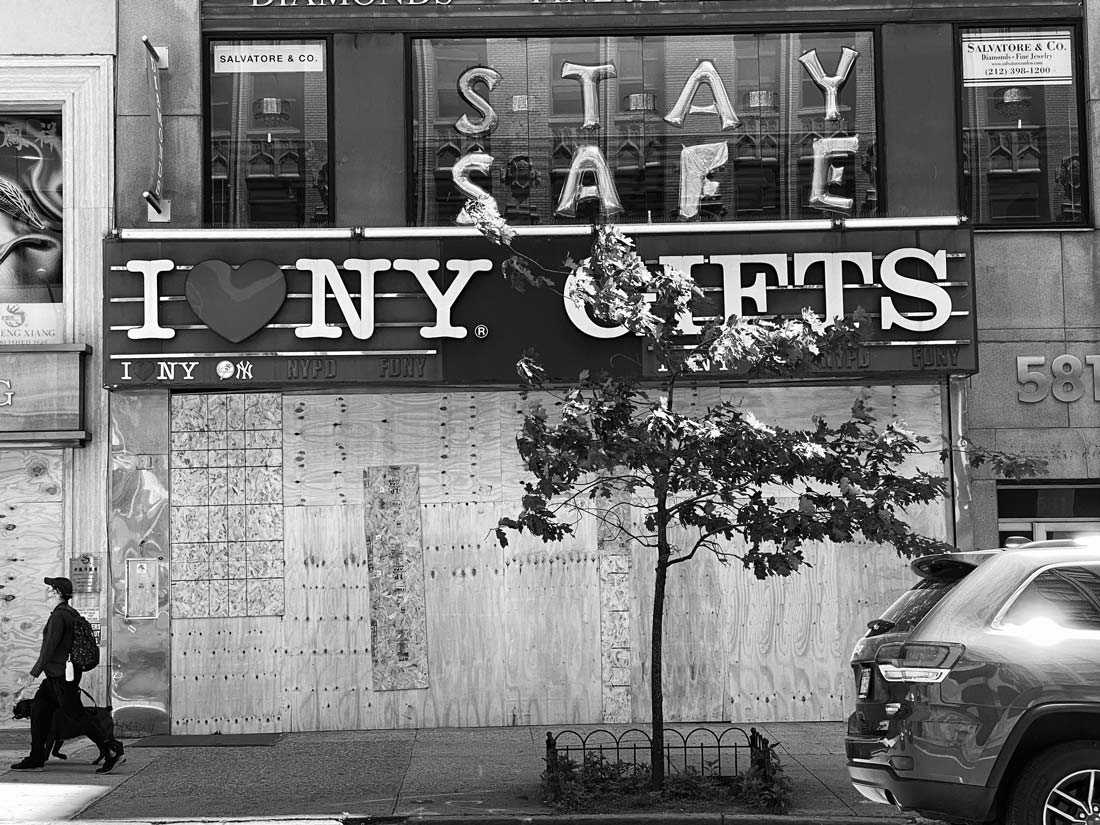 The ontological insecurity that prevails was already hinted at by the precarious effect of retrenched welfare state austerity measures. During the pandemic, however, the role of the welfare state and of democratic institutions had to be revisited, forcing critical considerations about the importance of and need for government leadership in the provision of basic resources in an inclusive way and in the logistics that need to be implemented to manage populations under crises. The inability to predict outcomes in the near future and the need for such attempts at prediction show how the legacy of modernity might still haunt us and the limits to accounting for an immutable totality. The shifting context that the pandemic created made clear that modernity’s desire for prediction in such a fluid set of circumstances should, in my view, be substituted with a shift in focus, instead, toward an understanding of context in the expansive complexity of the pandemic’s impact. Issues of race, gender, ethnicity and class emerge as important points of comparison.

For the same reason that the pandemic engulfed the globe, namely globalization, the experiences of this change have produced similar points of comparison. Government interventions globally have been similar: including lockdowns, curfews, social distancing, mask use, decision-making and policy development based on big data, and at least in Times Square, NYC advertisement screens echoing the safety measures of a sanitary and solidary culture. A comparative framework is necessary to account for the different ways and temporal variabilities of pandemic-related measures implemented in different locales around the globe. In Peru, men and women were assigned different days of the week to be outside in public to run basic errands during lockdown. 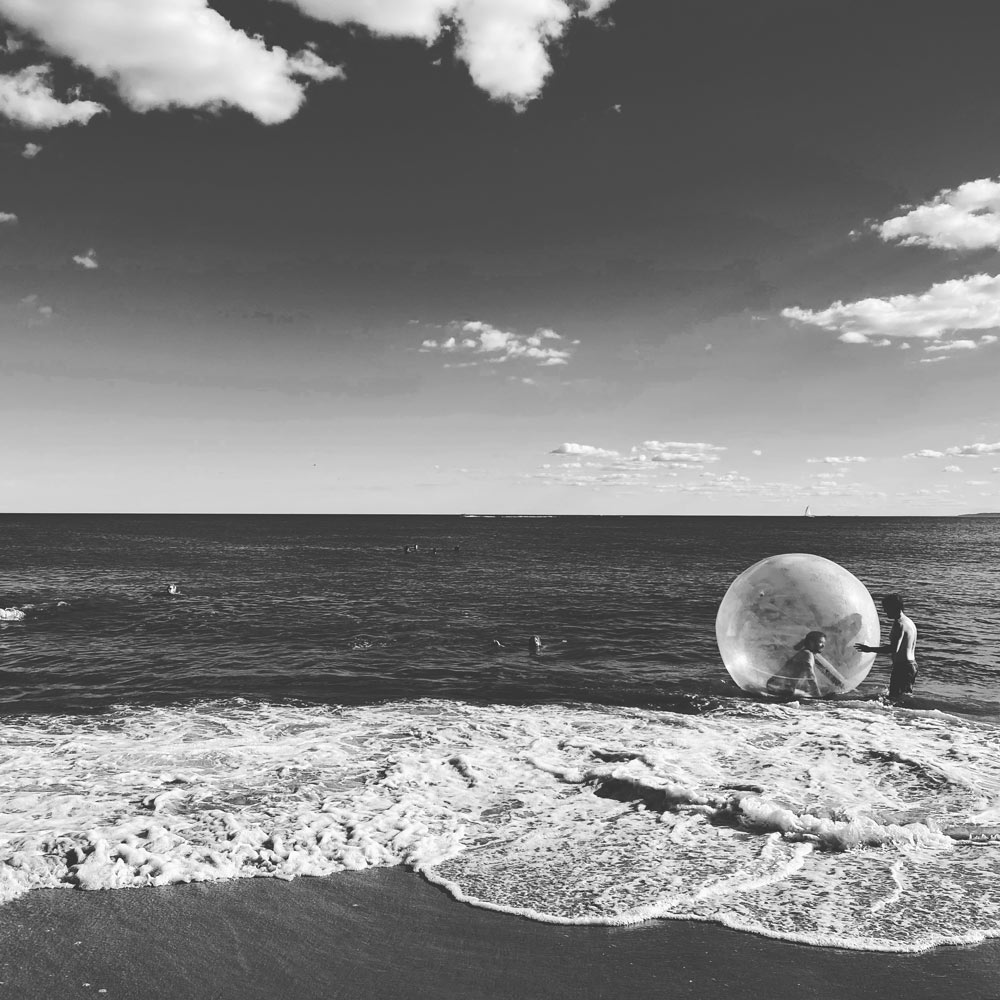 The use of public space in the most traditional sense – including parks, streets and beaches where different people gather – intensified. Central Park, Hudson River Park, Morningside Park, Prospect Park, and the Rockaways, to name just a few, became places where people exercised and carried out conversations (socially distant and masked) that helped them understand the challenges faced by all simultaneously. There has also been an intensification of neighborhood life, mainly due to the lockdowns and the circumscribed areas to venture outside. The use of neighborhood parks became a refuge and a facilitator of a supportive culture in the many conversations that take place there, still today, but certainly during the lockdown when parks were open for use (with the exception of playgrounds and the ban on group games like basketball). It was on the park benches, in the grocery store lines and on the street that a recognition of ourselves in others provided the opportunity to somehow make sense of and process the shock and fear we were experiencing. 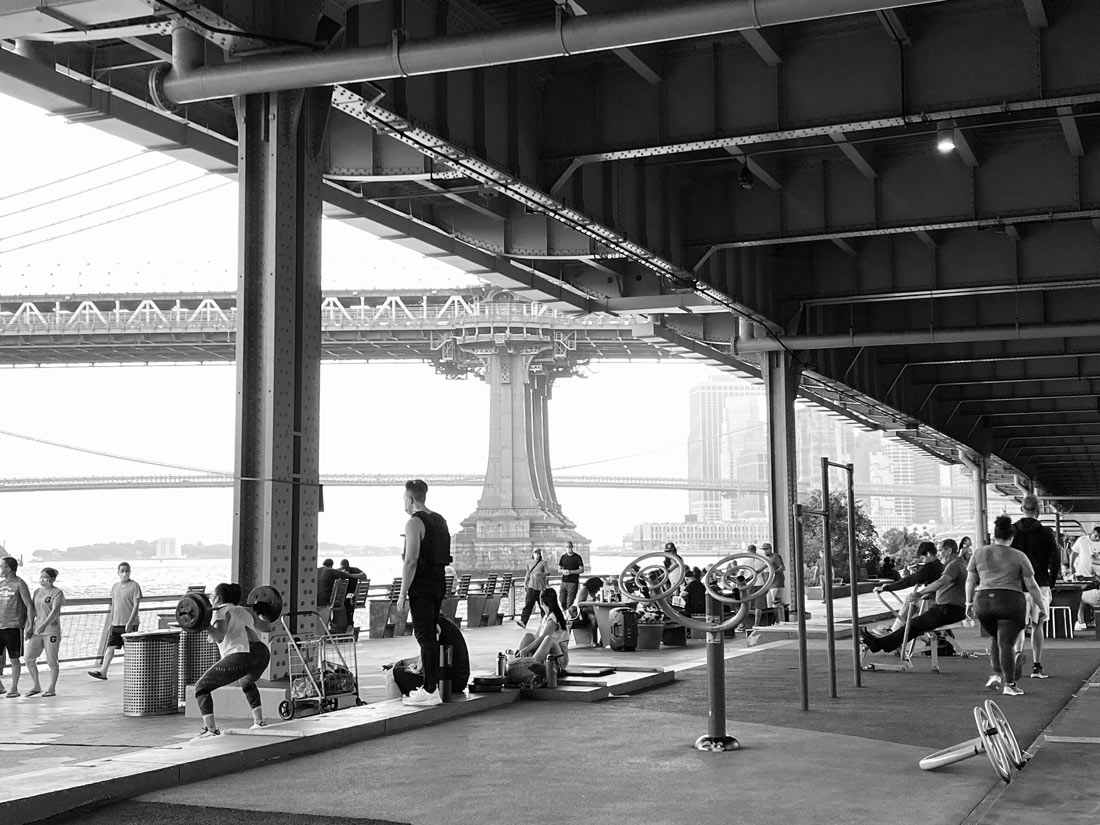 It was also in the public space of the streets that Black Lives Matter demonstrations for racial justice engulfed the city neighborhoods. Likewise, restaurants expanded into the streets that had been emptied of car traffic while the use of bicycles became pervasive. Many street closures provided for pedestrian and cyclists use. Cycling – one of the “safest” activities to avoid COVID-19 contagion – noticeably grew as an outdoor activity. Even though the city was already moving in the direction of creating more bike lanes, similar to many cities around the world as part of pre-pandemic sustainable and creative city urban development, bike culture in NYC has improved dramatically. There is more awareness of cycling and more cyclists in the streets. 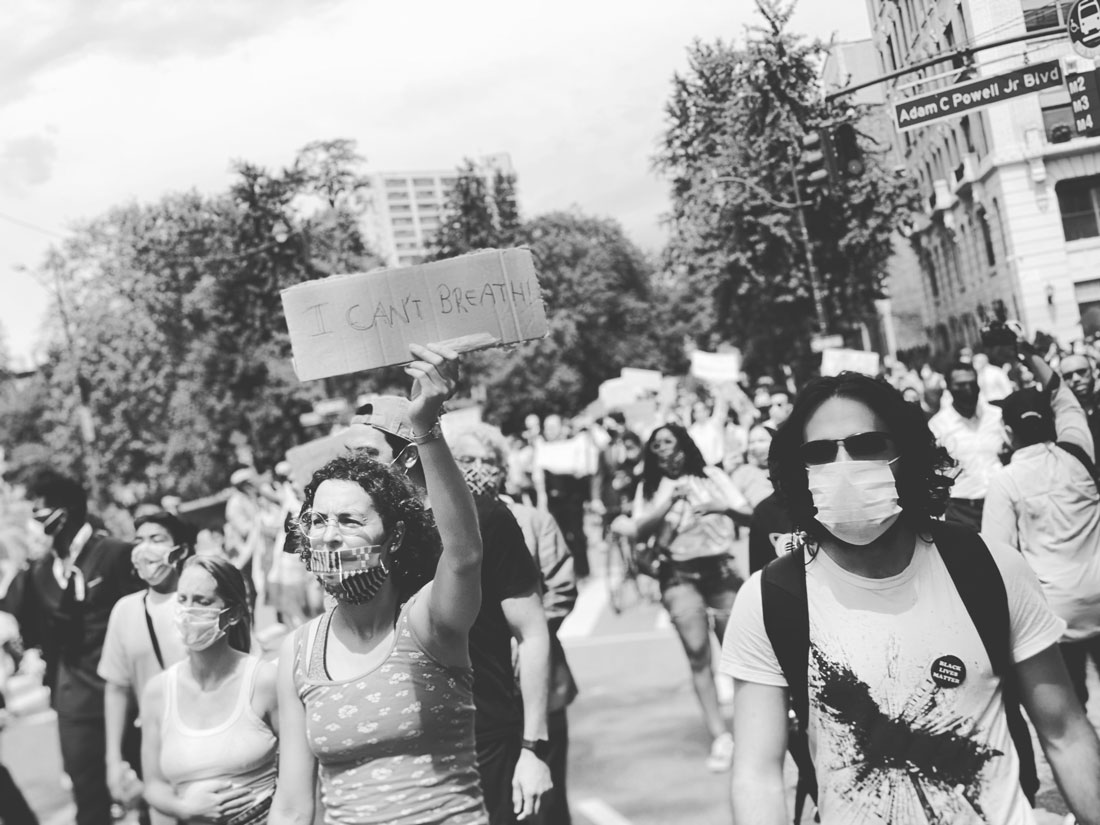 The riots during the demonstrations after the pandemic lockdown prompted businesses to board up their windows. In Soho, street art emerged spontaneously on the boarded up establishments. It was a labyrinth of street art that somehow substituted the closed museums. Many businesses subsequently closed. Vacant Midtown offices and apartments can also be included as casualties of the pandemic. The homeless crisis has become more visible as well. Hotels were used to house the homeless when the shelters became dangerous spaces that could propagate infections in their enclosures.

As the vaccination process slowly progresses, the city is still slowly emerging from the effects of the pandemic that has left us reeling, not only in NYC but globally, with differing degrees of intensity.