Pontsteiger Residential Building: A Public Space Within Itself

Pontsteiger (‘ferry pier’) is a large-scale residential project in Amsterdam, NL. The building is located at the end of a 200-metre dam that projects into the water of the River IJ. The ‘Big Friendly Giant’ foreshadows Amsterdam’s growth of high-rise buildings around the River IJ. The design creates not just an iconic object but a public space within itself. 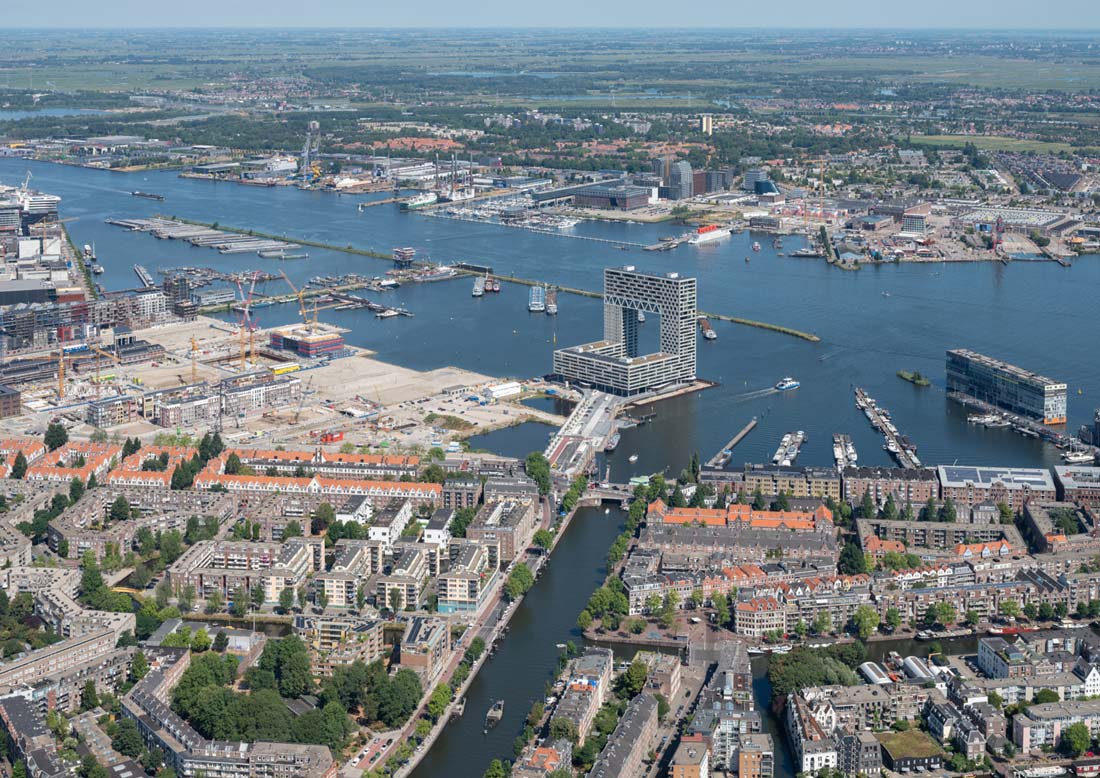 The building consists of a six floor low-rise block that wraps around a plaza on the waterfront. Two slender 60-metre-high towers at the open end of this block frame the river view. The towers carry a bridge spanning 48 metres, rising to a height of 90 metres above the city. The building is elevated 7 metres and set upon a base of four pavilions. The pavilions accommodate lobbies, restaurants, bars and cafes. A marina is located on the west side. The public space on the ground level provides access to the water on all sides and creates views across the river in every direction. Despite its scale, the building’s elevated volume creates an astonishing light-footed presence on the site and a constantly changing appearance that is different from every part of the city. Pontsteiger contains 366 apartments, 2000 m² of commercial space, and a parking garage with 338 spaces. 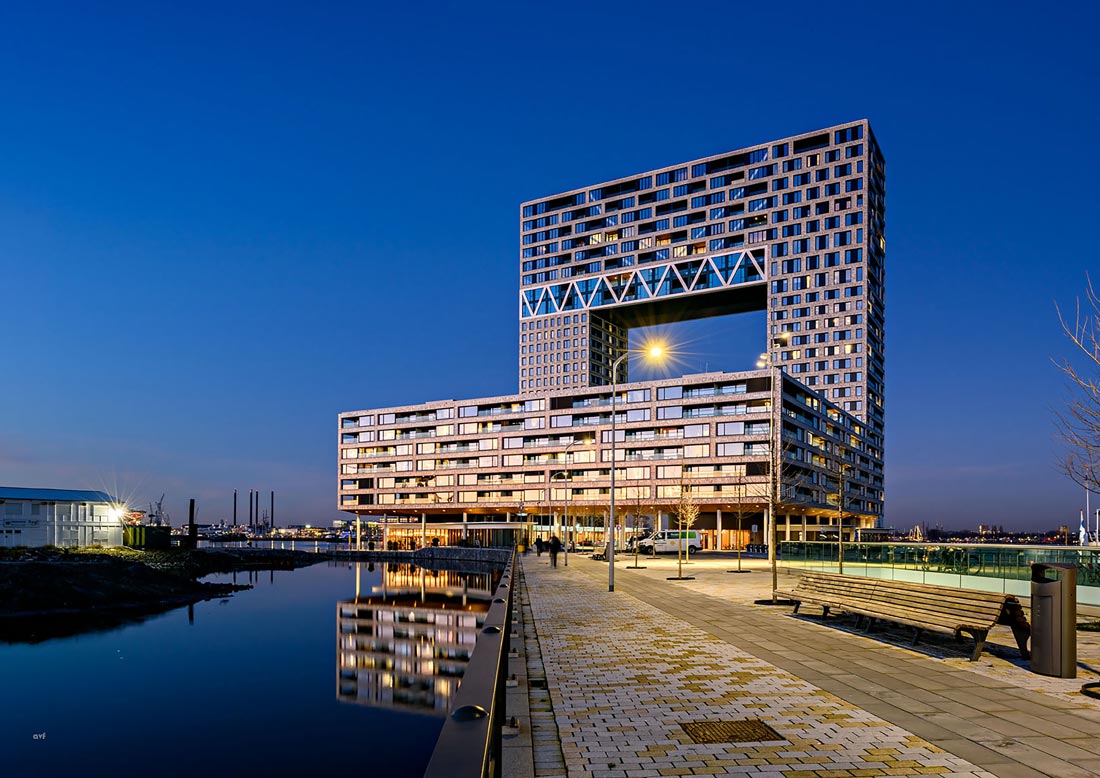 The unusual form was designed with apartment dwellers’ preferences in mind: residential demand is highest either at the top of high-rises (penthouse views) or at the base to connect to the liveliness at city level. In Pontsteiger the part in between is simply minimized. The volume is adjusted to its context: low where it borders on the city’s low-rise new town ‘Houthavens’ (Timber docks) and high where it meets the large expanse of the river. 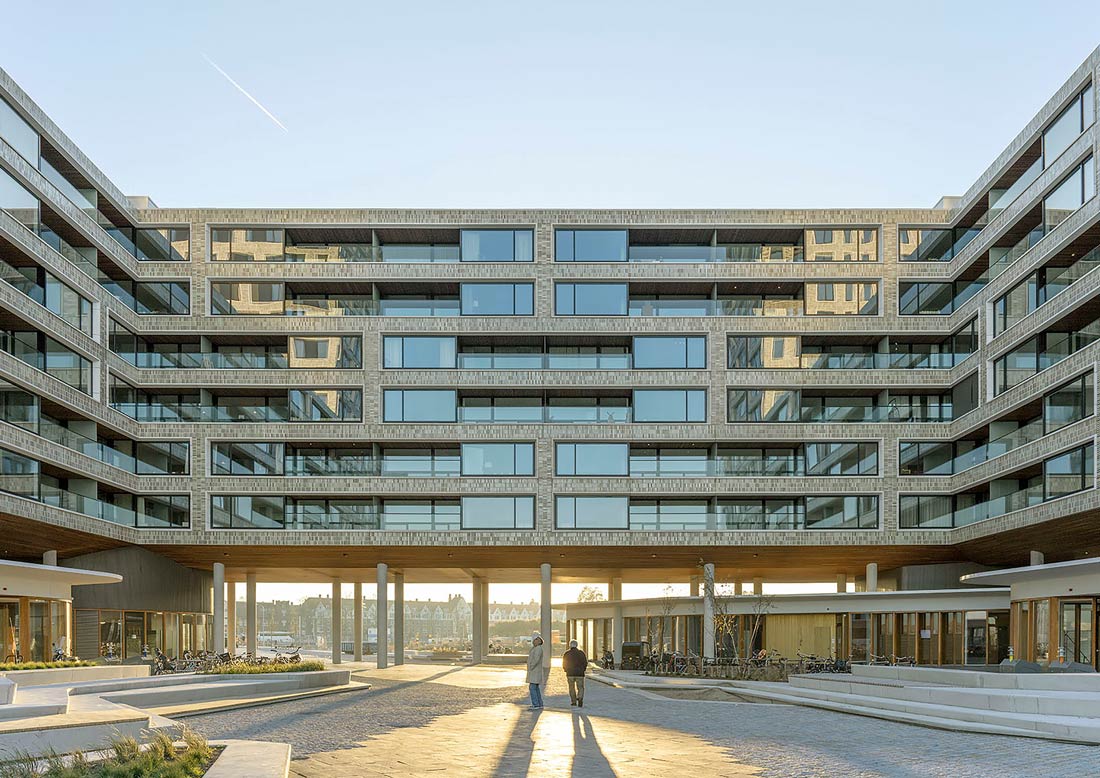 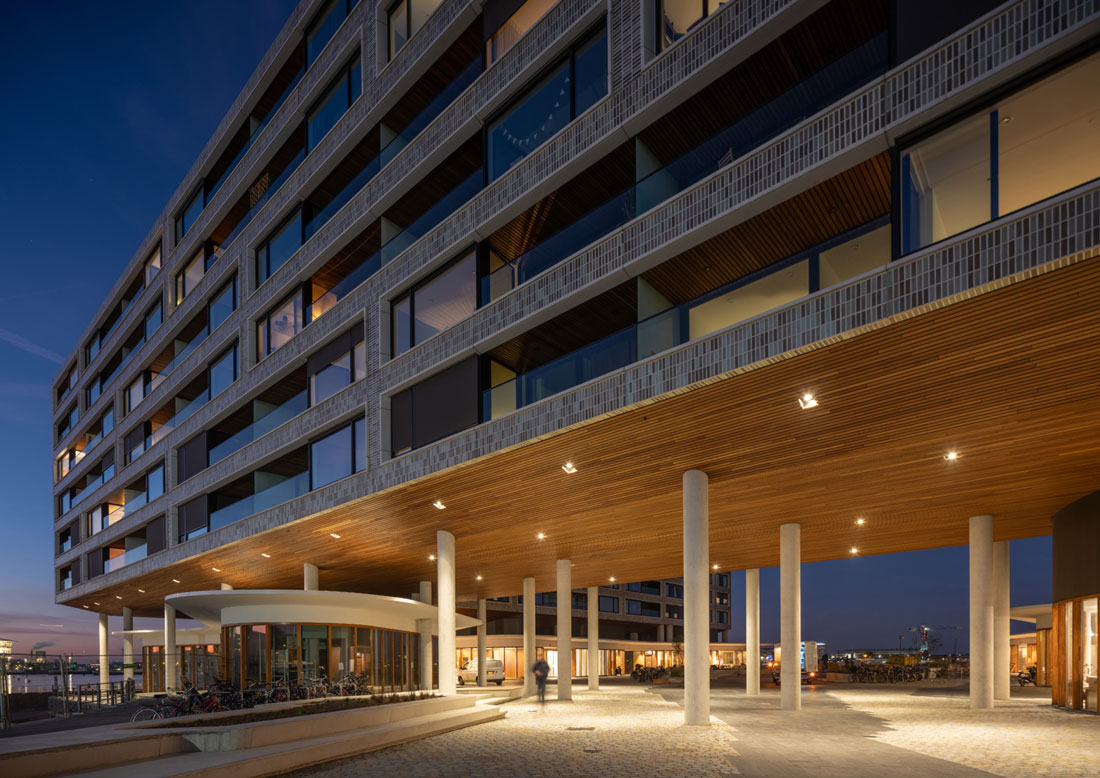 Flexibility has been key in the design, which dates back to 2007. Seven totally different residential programmes were designed in the 13 years of its making. The original concept proved to be capable of adapting to extreme market forces throughout the project (the global financial crisis and the resulting Dutch residential crisis) while retaining the same proportion and appearance. Its 22-metre thickness allowed for a variety of circulation types, resulting in a highly adaptable and everchanging mix of floorplan typologies. In the final project the sizes of apartments range between 65 m2 and 410 m2. The ‘for sale’ apartments in the bridge have flexible floorplans to be customized by the buyers. 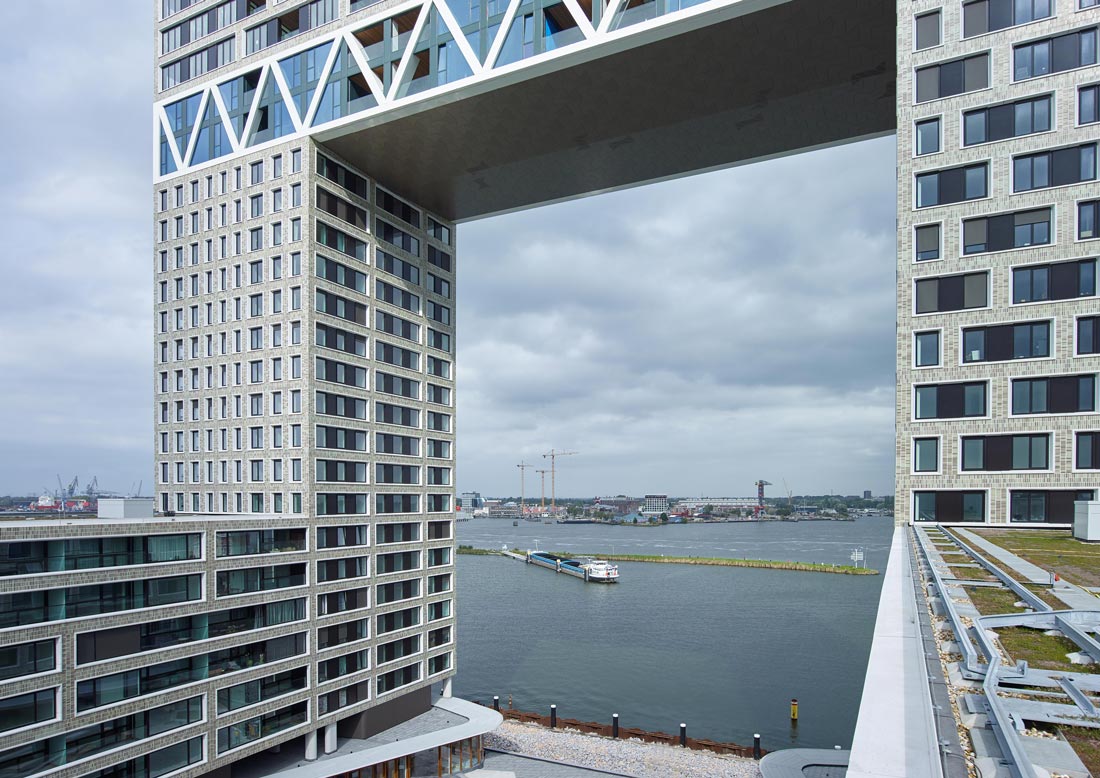 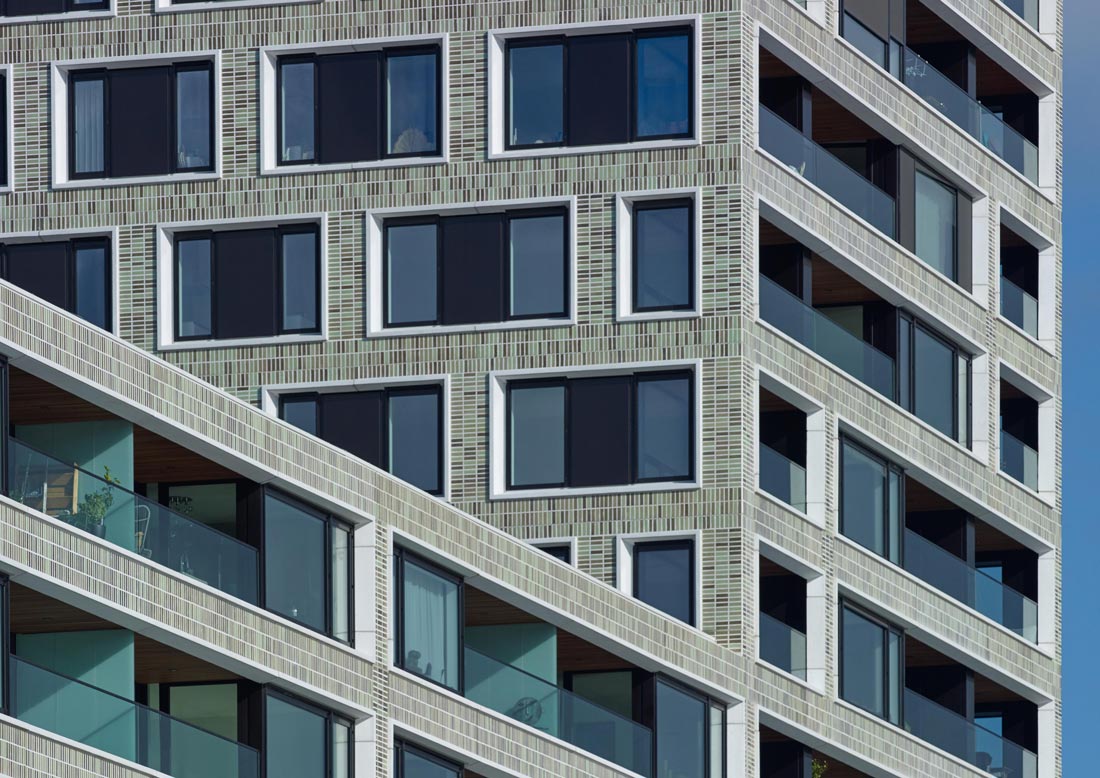 The main structure is concrete. The bridge’s structure consists of four 78-ton steel trusses with four diagonal braces each. Extra insulation, low-energy elevators, LED lighting and hot-fill dishwashers and washing machines bring the energy demand for heating and electrical power to half of what Dutch building law demands. The roof is covered with 2600 m2 of PV and 1800 m2 greenery. 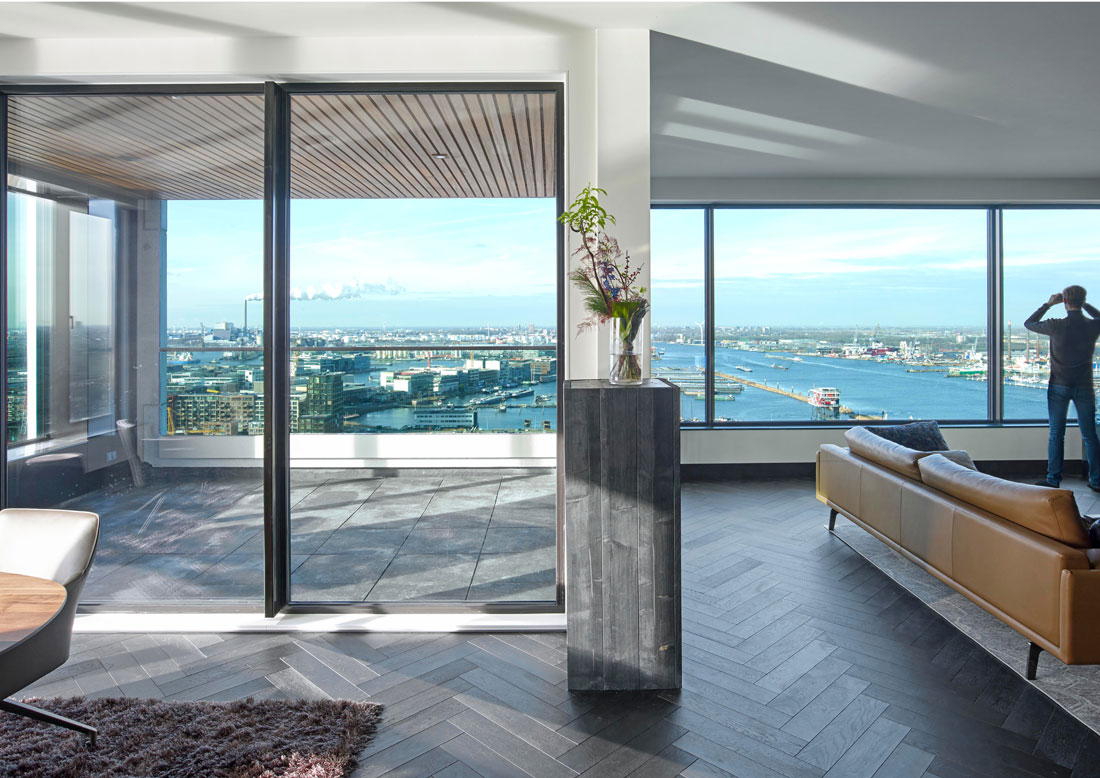 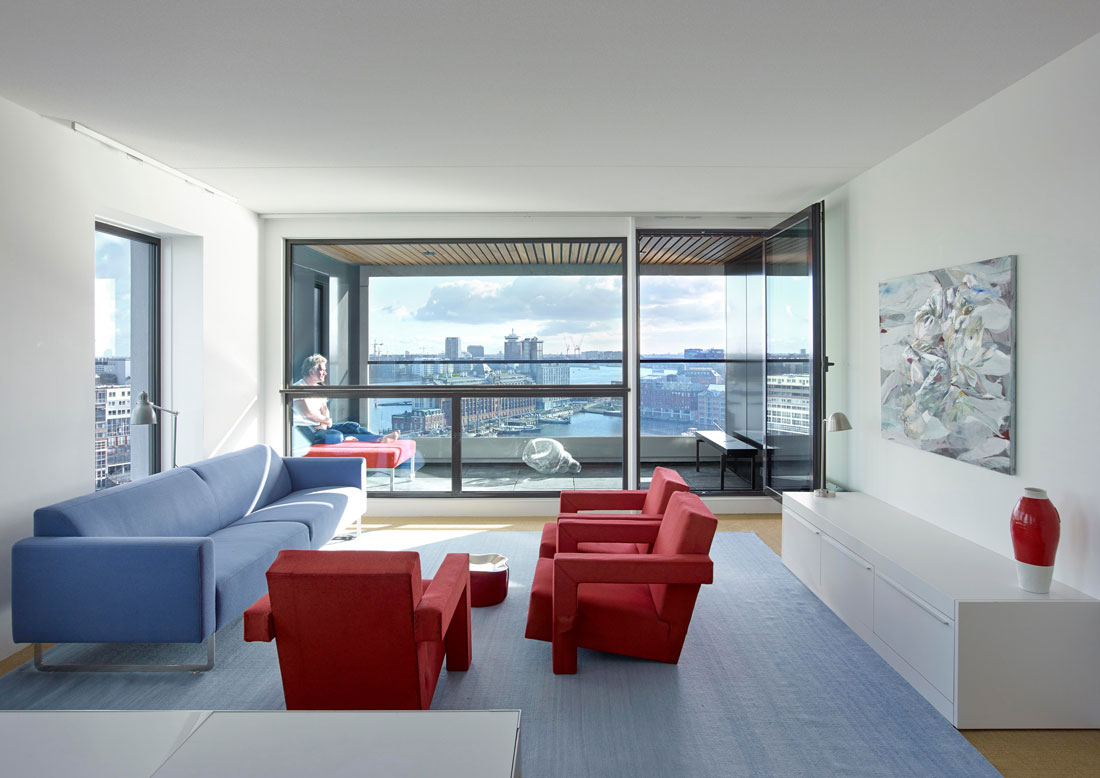 In the façades of Pontsteiger a playfully patterned grid of marble-white concrete is set with artisan glazed bricks. The chameleonic tones of green and bronze create a façade that changes with the light and time of day, just like the surface of the waters that surround the building. XL aluminium framed windows open onto spectacular views all around. The large balconies are set within the building volume and are protected by large glass windscreens. All exterior ceilings are clad in timber lending the building a warm atmosphere while referring to the location’s history of timber docks. The glazed pavilions around the plaza have sensuous curves and are constructed with sturdy timber window frames. The canopies bring a smaller scale to the ground floor and shield from occasional downbursts of wind. 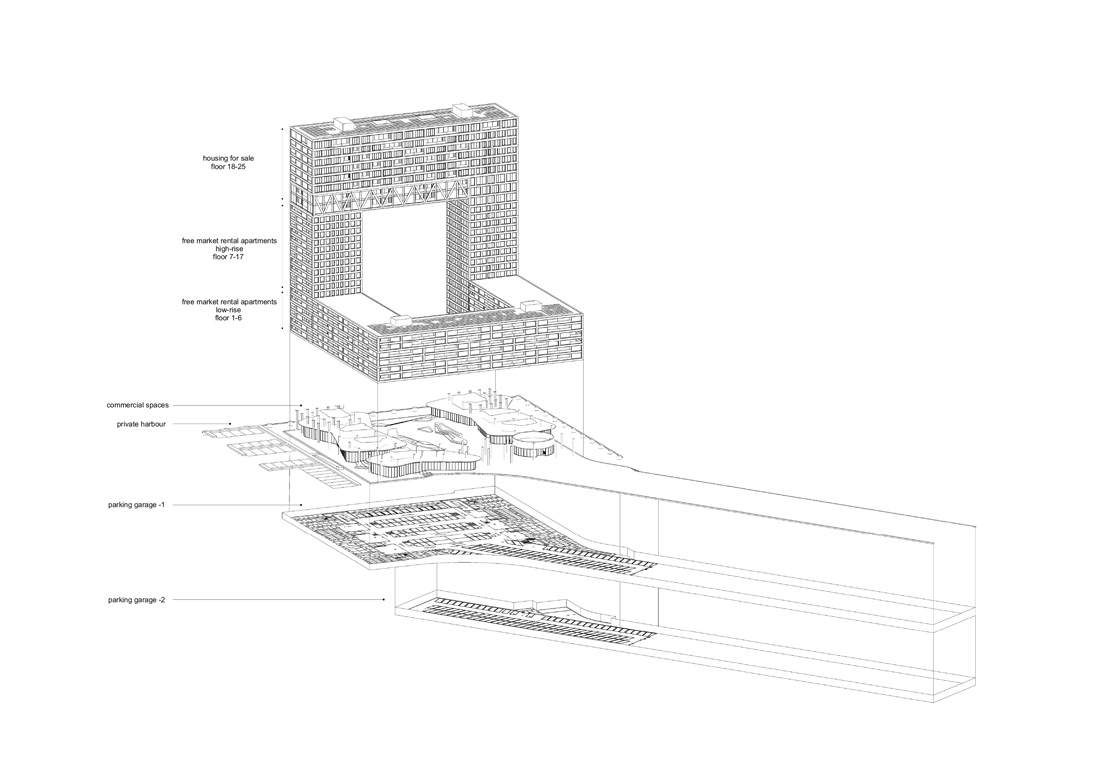 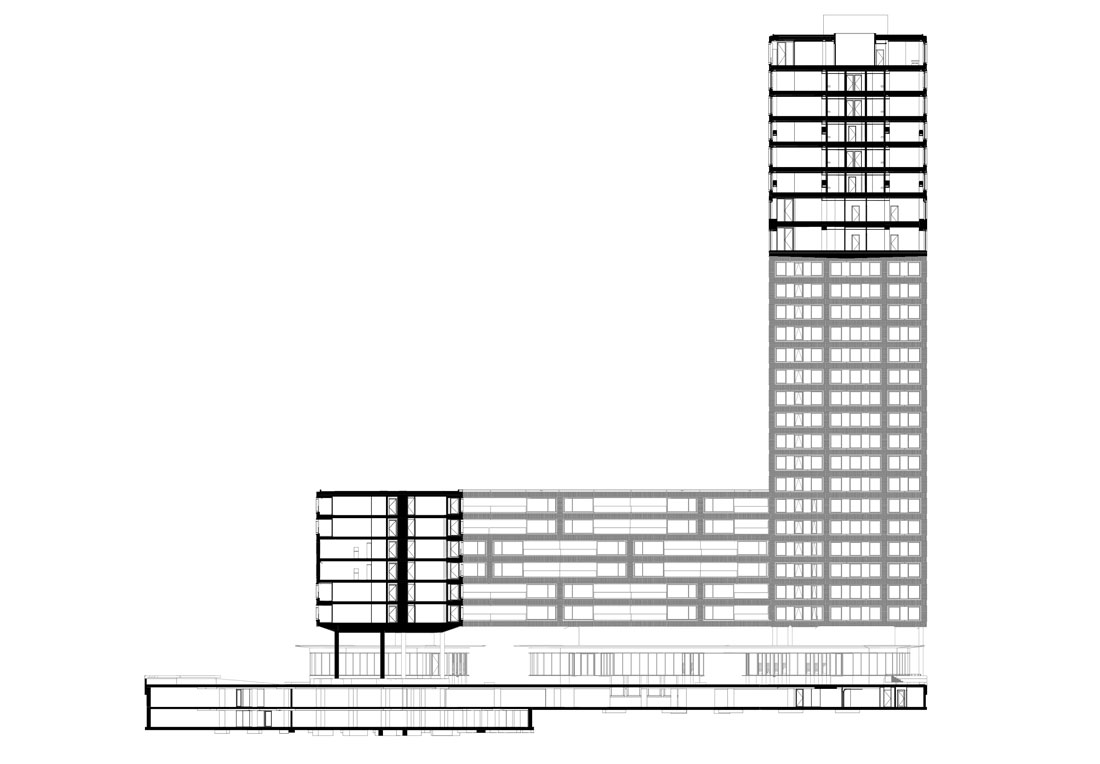 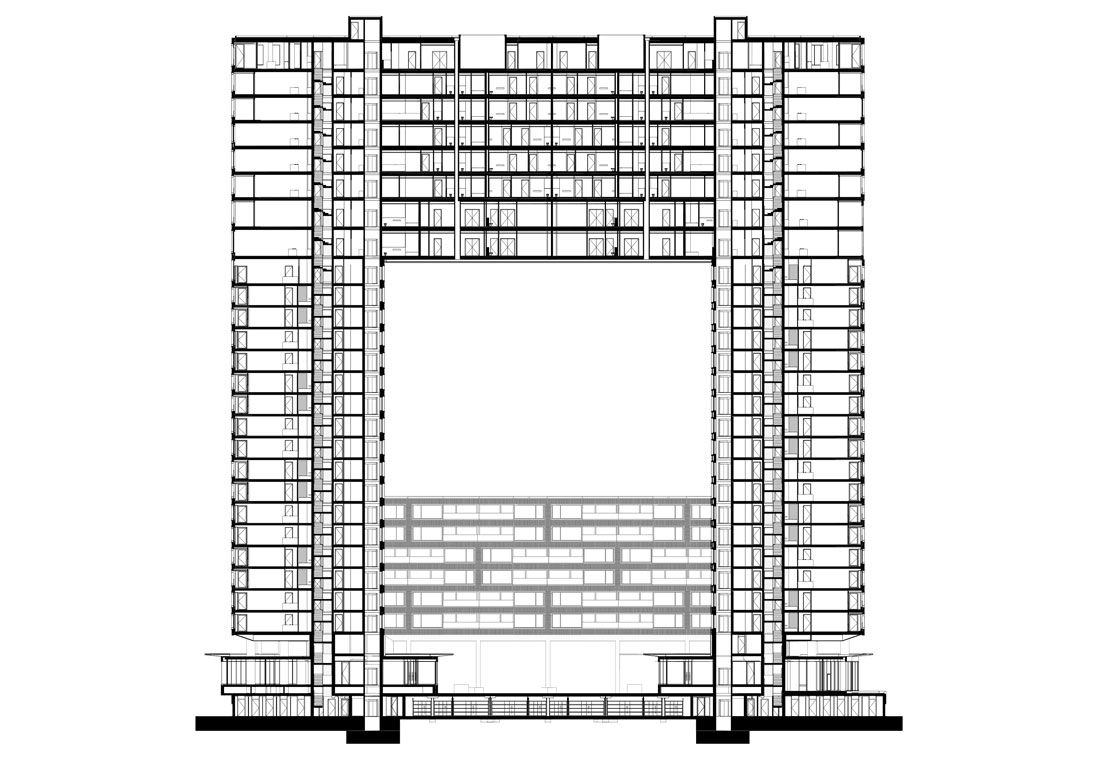 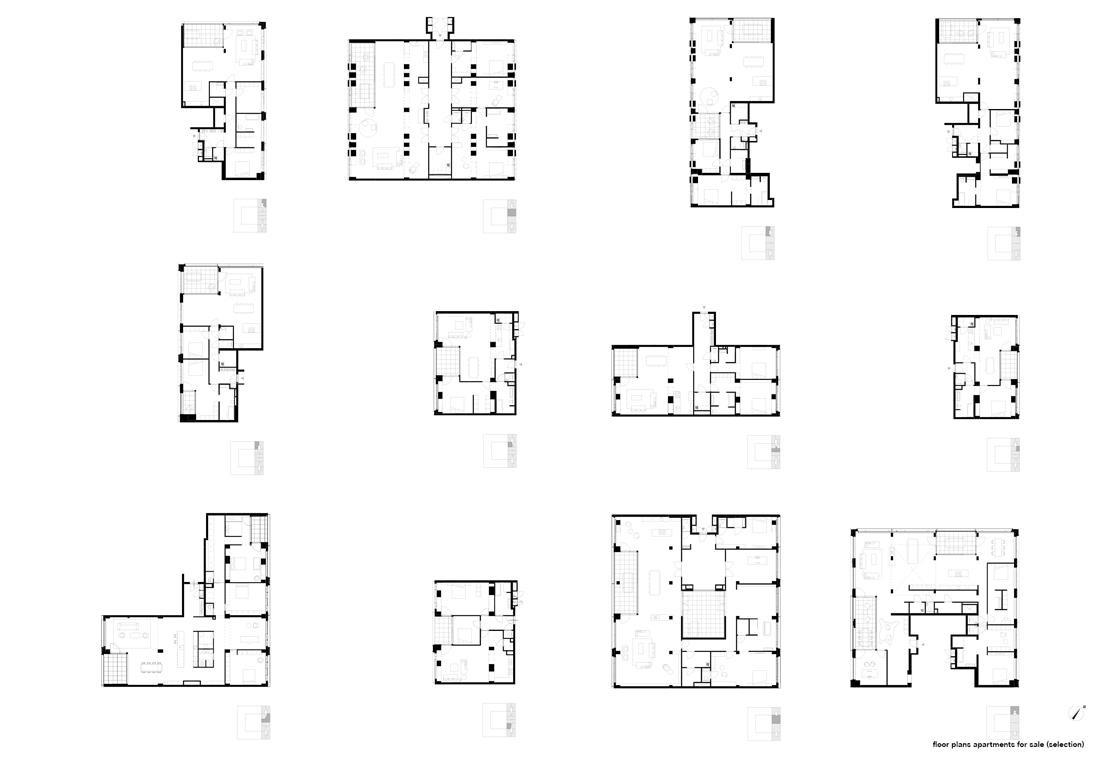 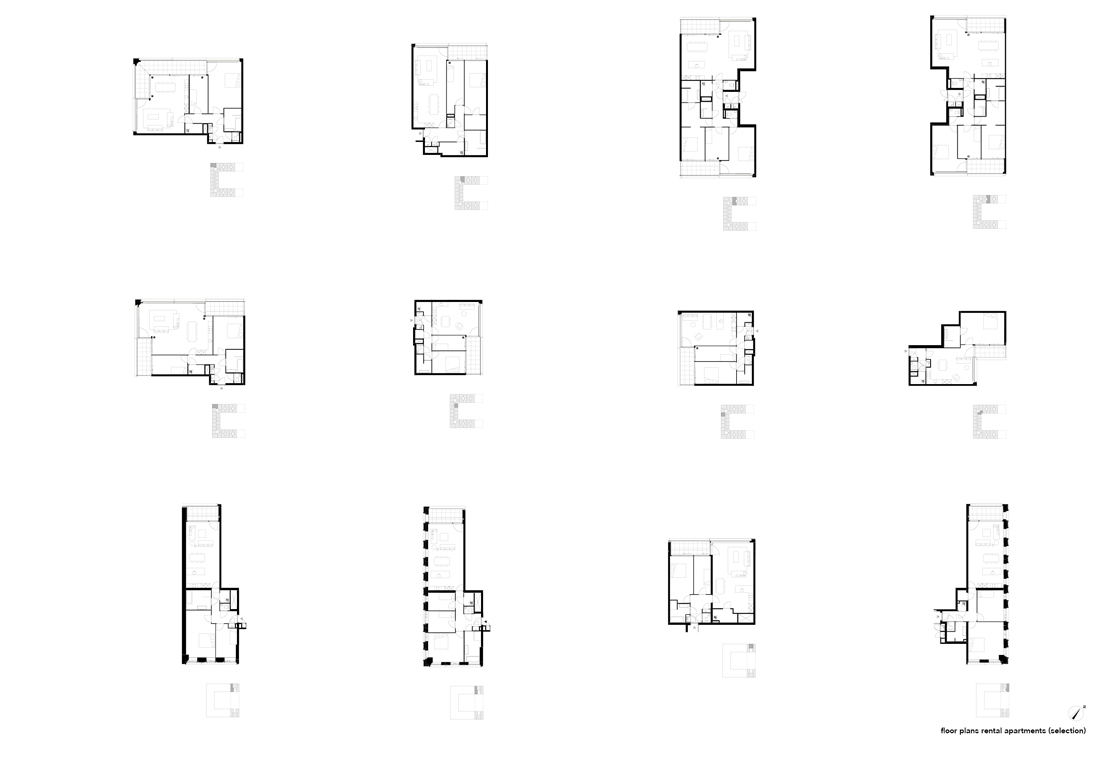