Marcos Cruz and Marjan Colletti have been working together for the last fifteen years; founding the marcosandmarjan studio. They met each other in London at the end of 1998 at the Bartlett School of Architecture. In both cases, Marcos and Marjan whether in their individual or joint design work, come up with a new world of habitation full of comfort, service, atmosphere, emotional touch – that is real and virtual, complex and not pure. A hybrid of things, all acting well together and morphing gently from one to the other. 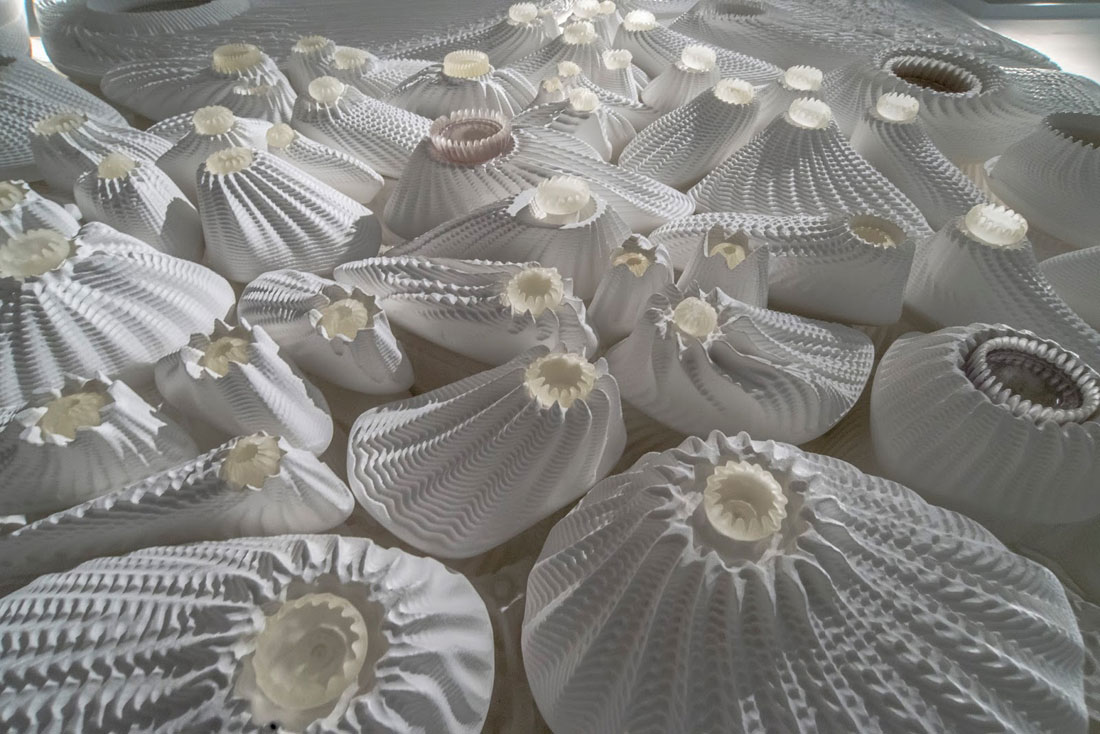 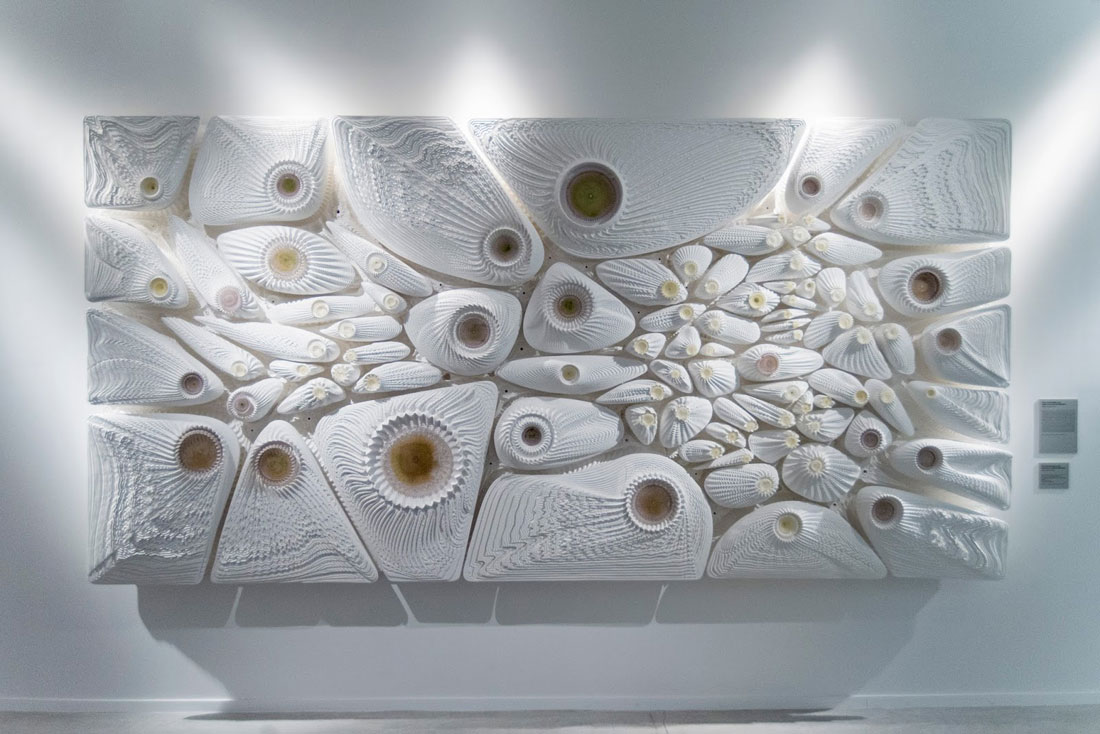 Algae-Cellunoi, installed at the 2013 ArchiLAB exhibition Naturalizing Architecture, is an ornamental wall structure for external use. It is composed of numerous cellular foam components resulting from a computational Voronoi pattern that determined the size and complexity of each cell. A sequence of lofted surfaces follows a gradient of punctuated lines and indentations that vary according to the geometric inclination
of each surface, similar to growth layouts in sea barnacles and shells. To achieve this, the milling path of each cellular component was digitally controlled and manipulated. The result has multiple patterns with gaps and crevices. Each cellular component is seeded with terrestrial algae
that grow in the ridges between the components. The selected algae strains are Neochloris texensis, a soil based algae of the Neochloris genus and Trentepohlia. Furthermore, each cellular component is also designed to host a variety of Objet 3D printed flasks, in which liquid algae
can grow for ground fertilization or for creating a varied natural ecology on the wall. 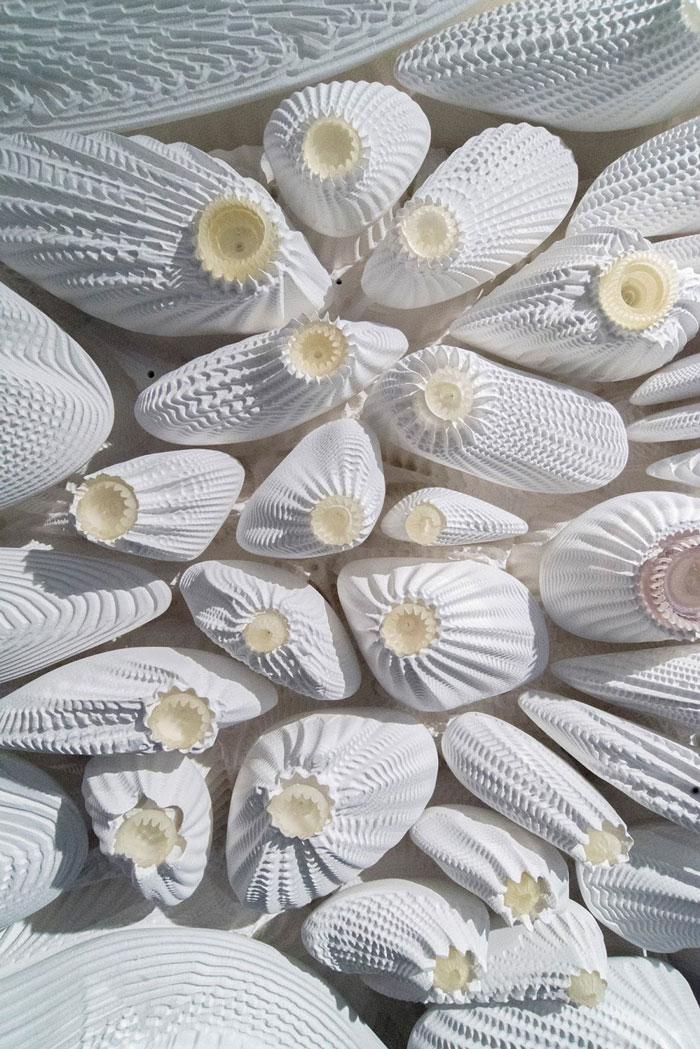 Located at Euston Square Gardens, this installation consists of a large decorative canopy-structure, a Gazebo. The concept of the Gazebo follows an English tradition in which such filigree construction becomes a jewel that punctuates the landscape, creating a small gathering or viewing point that in turn organizes the natural setting around it. The steel structure also fits in the tradition of exposed steel paraphernalia – gates, fences, fountains, pipe work etc. – which distinguishes and enriches so many UK cities. The complex patterns of the surface create a unique ornamental structure that evokes a sense of delicacy and elegance, with an ever-changing effect of light and shadows. 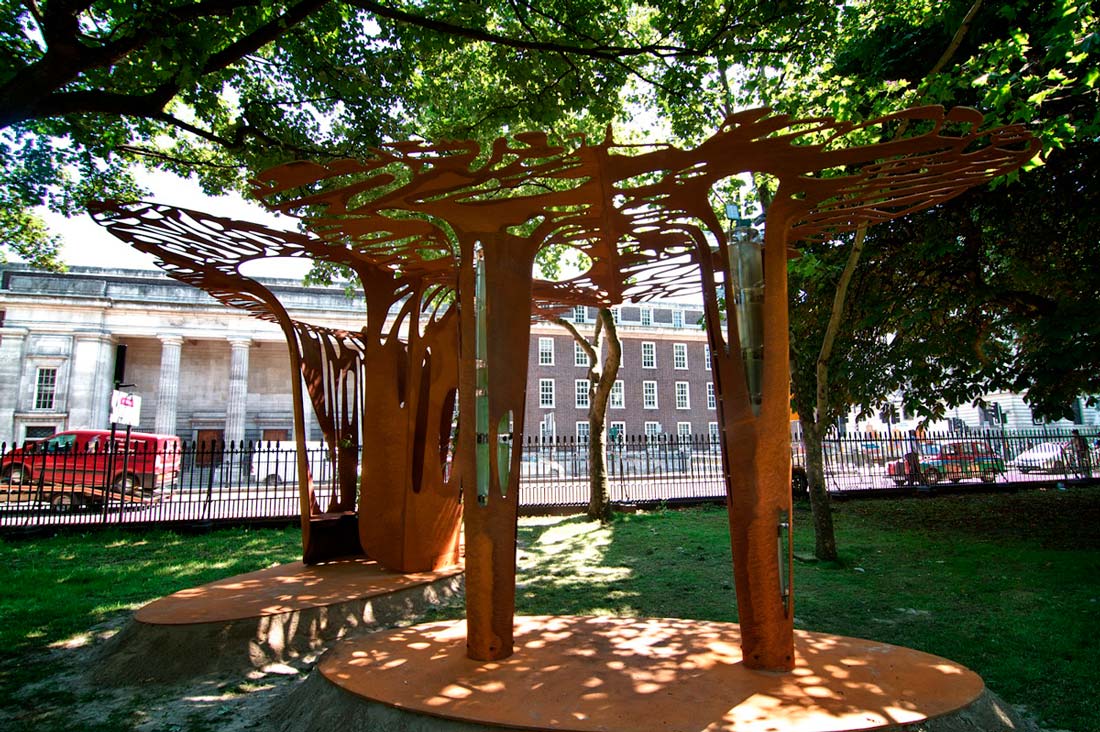 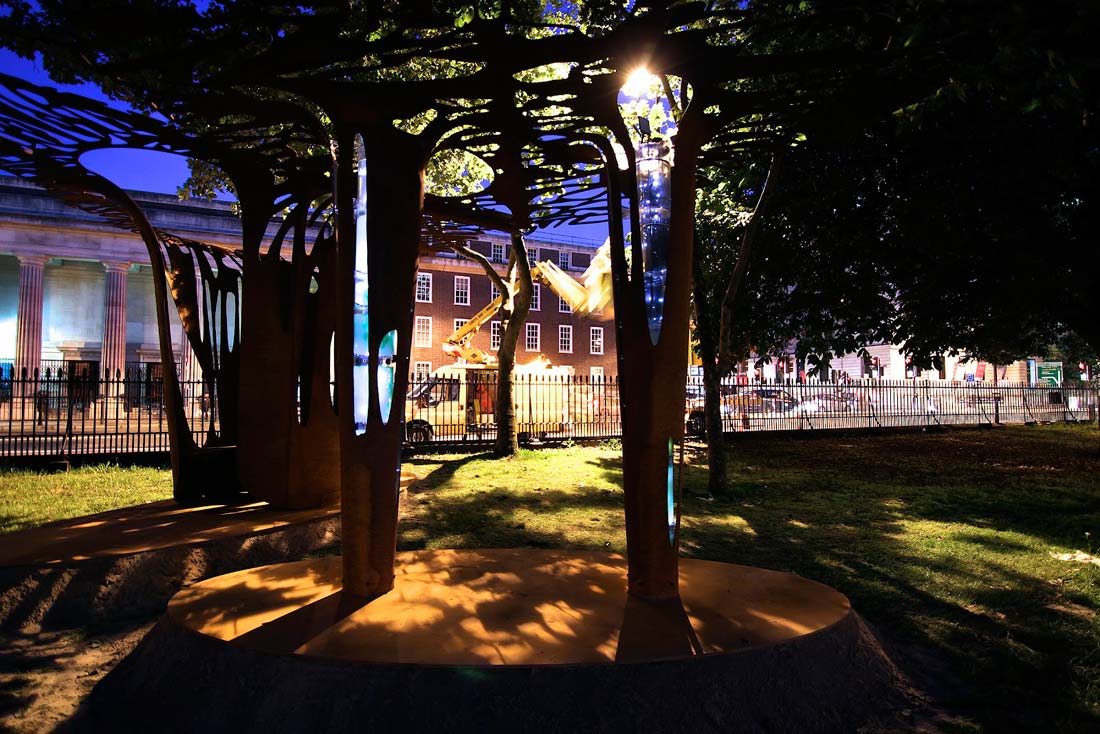 The internal space functions as a sitting facility for visitors to rest and gather or simply contemplate the surrounding views. The permeable boundaries of the structure, also allows for an endless play of framed vistas through and in-between it. The Gazebo also triggers associations of dynamism, indeterminacy, transparency, as well as joyfulness, festiveness and community, all of which, combined with the recyclable materiality and biotechnological augmentation of the structure makes it a potentially iconic landmark within the London Olympic setting. 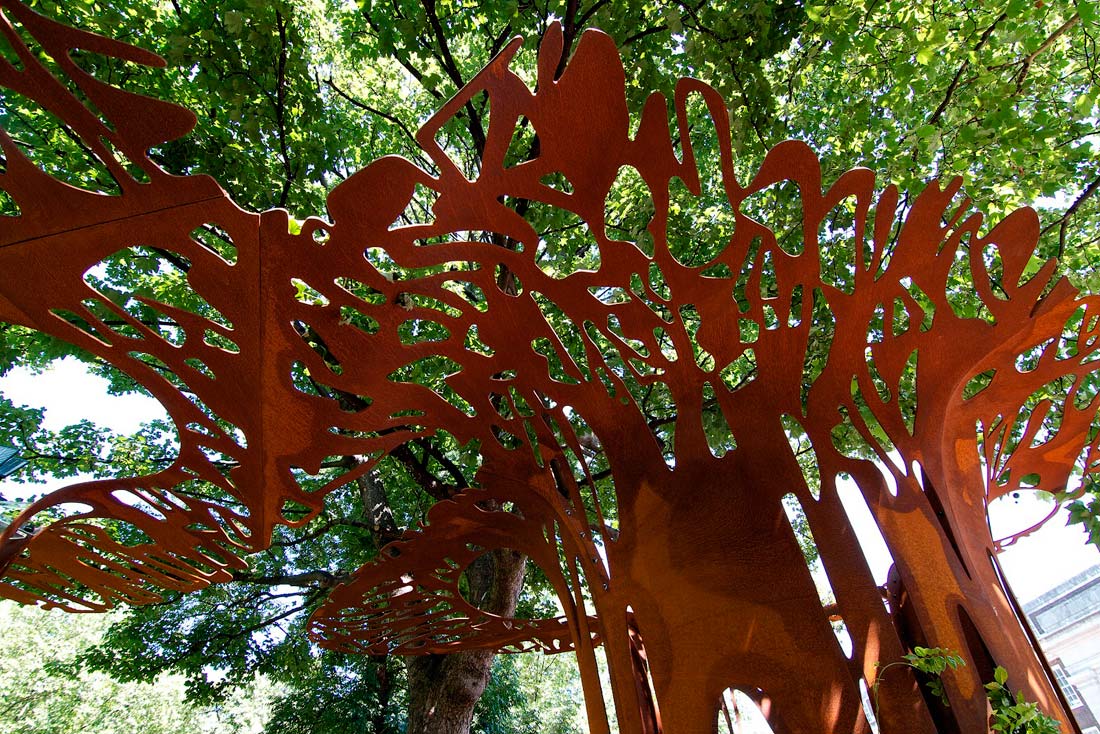 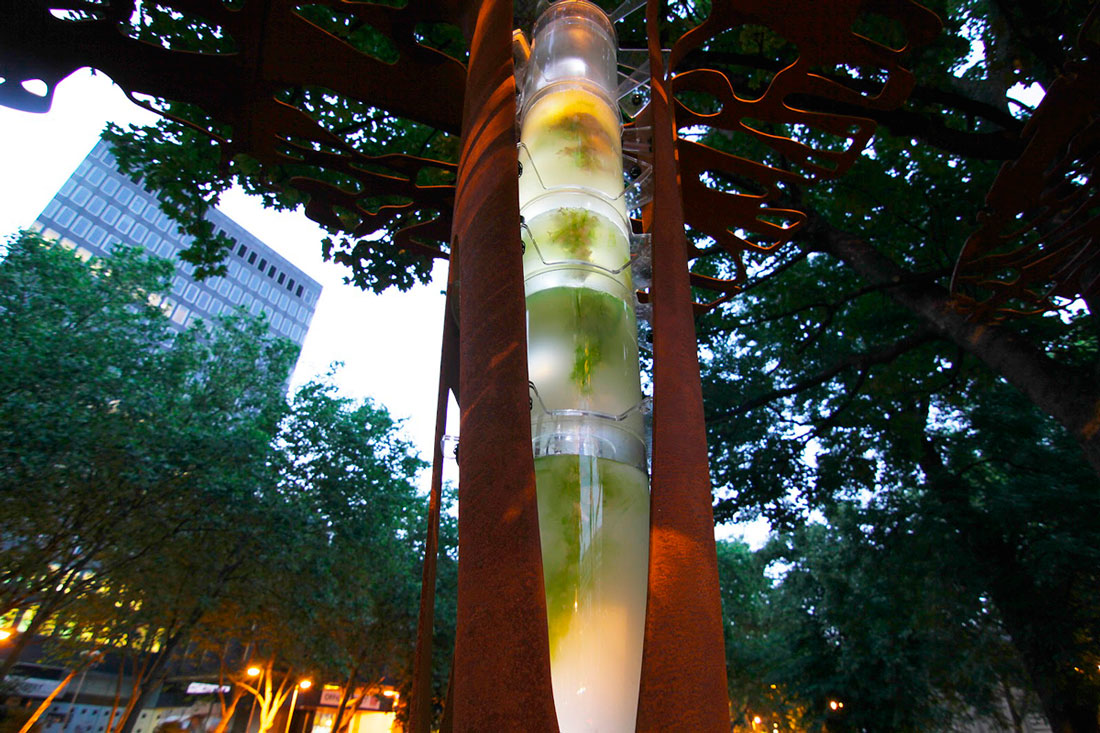