Longs Peak, the tallest and most iconic mountain in Rocky Mountain National Park, has become one of the most frequented “fourteeners” in the state of Colorado. To better deal with human waste on this historic trail, the National Park Service (NPS) installed their first backcountry toilet in 1983. Since its installation 35 years ago there have been few technological advances, while visitation to the park has nearly doubled: from 2.5 million visitors in 1982 to 4.5 million people in 2016. The aging technology has deteriorated in the harsh climate to the point that waste is now required to be removed by the shovelful, placed into five-gallon buckets, and carried down the mountain using llamas. 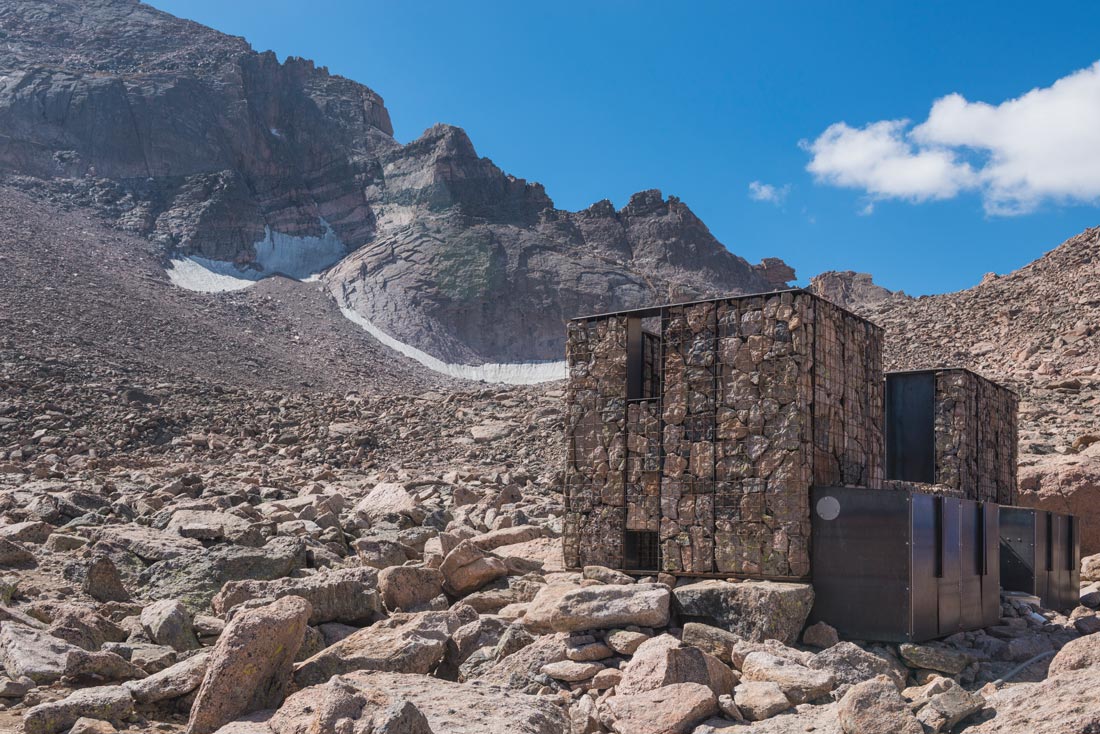 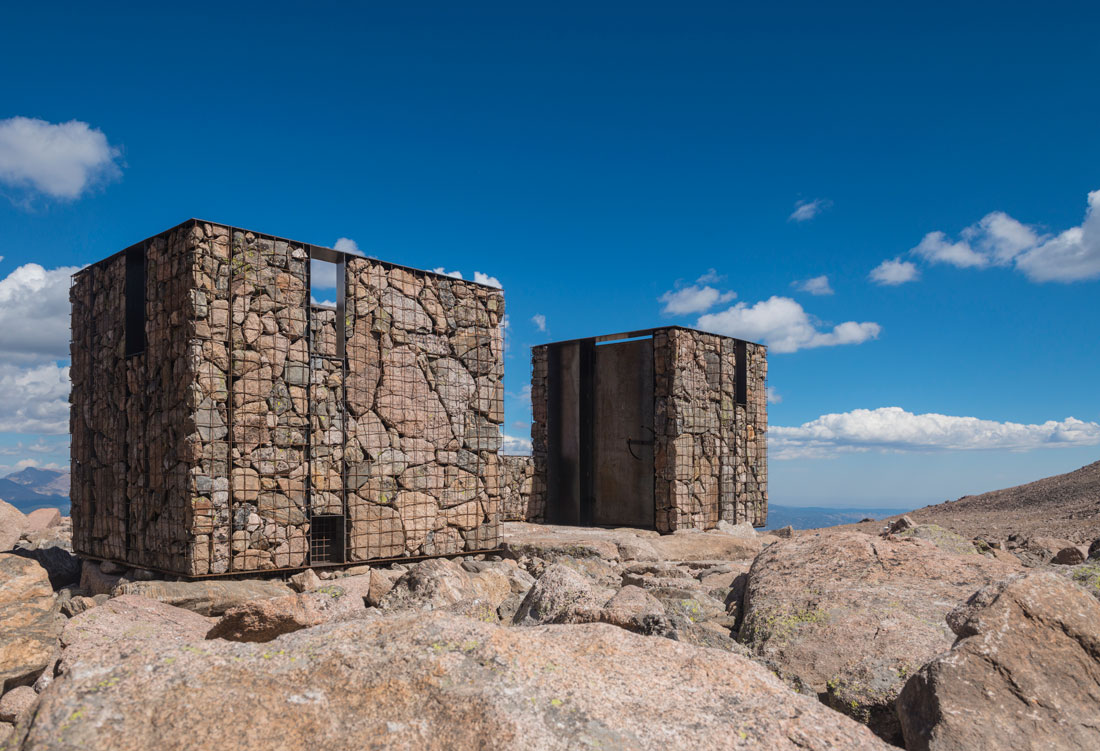 Determined to find a better privy design, and a more humane solution for collecting waste, NPS collaborated with ColoradoBuildingWorkshop, the design-build program at the University of Colorado Denver, to redesign and construct new backcountry privies. To ensure the project’s success, NPS created an interdisciplinary team (IDT) to provide feedback to the students throughout the process. Colorado Building Workshop additionally reached out to a structural engineer, a welding engineer, and the National Renewable Energy Lab (NREL) to provide additional consultation during design and construction. 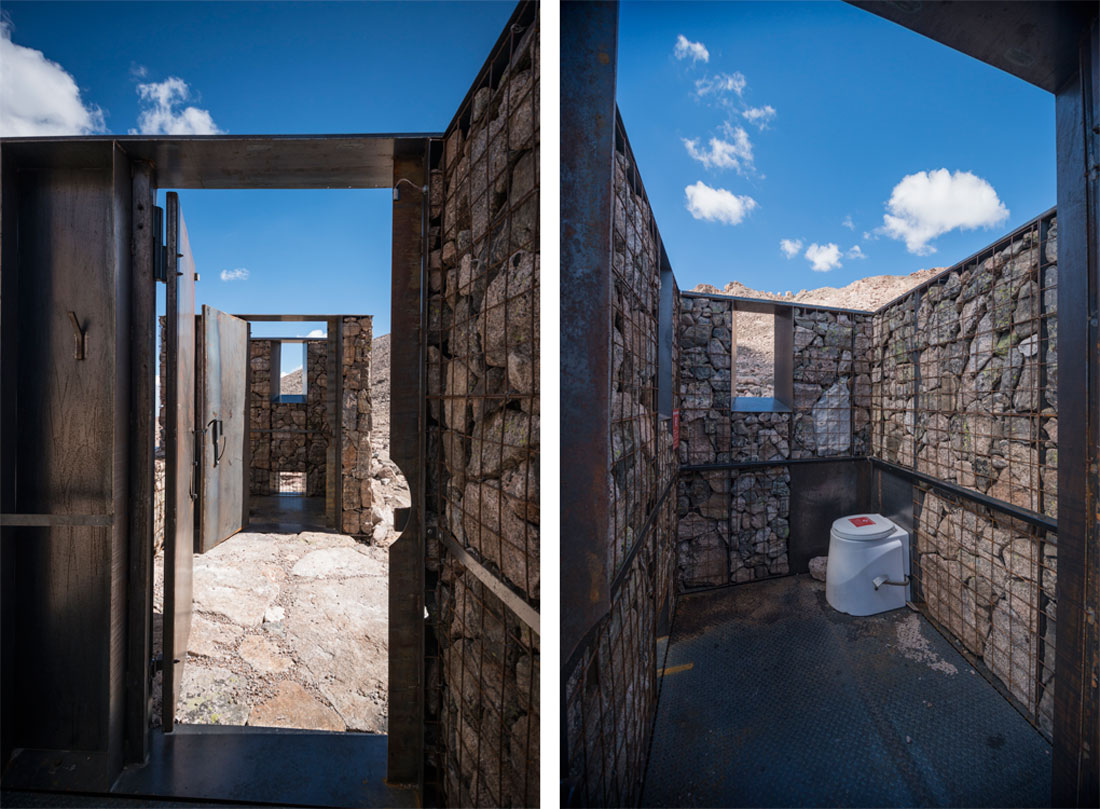 The new Longs Peak Privies explore lightweight prefabricated construction and emerging methods of waste collection to minimize the human footprint in Colorado’s backcountry. The final design solution is a series of prefabricated structural gabion walls. Within the gabions, a series of thin steel plate moment frames triangulate the lateral loads within the structure, while stones, collected on-site, are used as ballast. This innovative construction assembly allows for rapid on-site construction (the project was erected in eight days) and an architecture that disappears into the surrounding landscape. 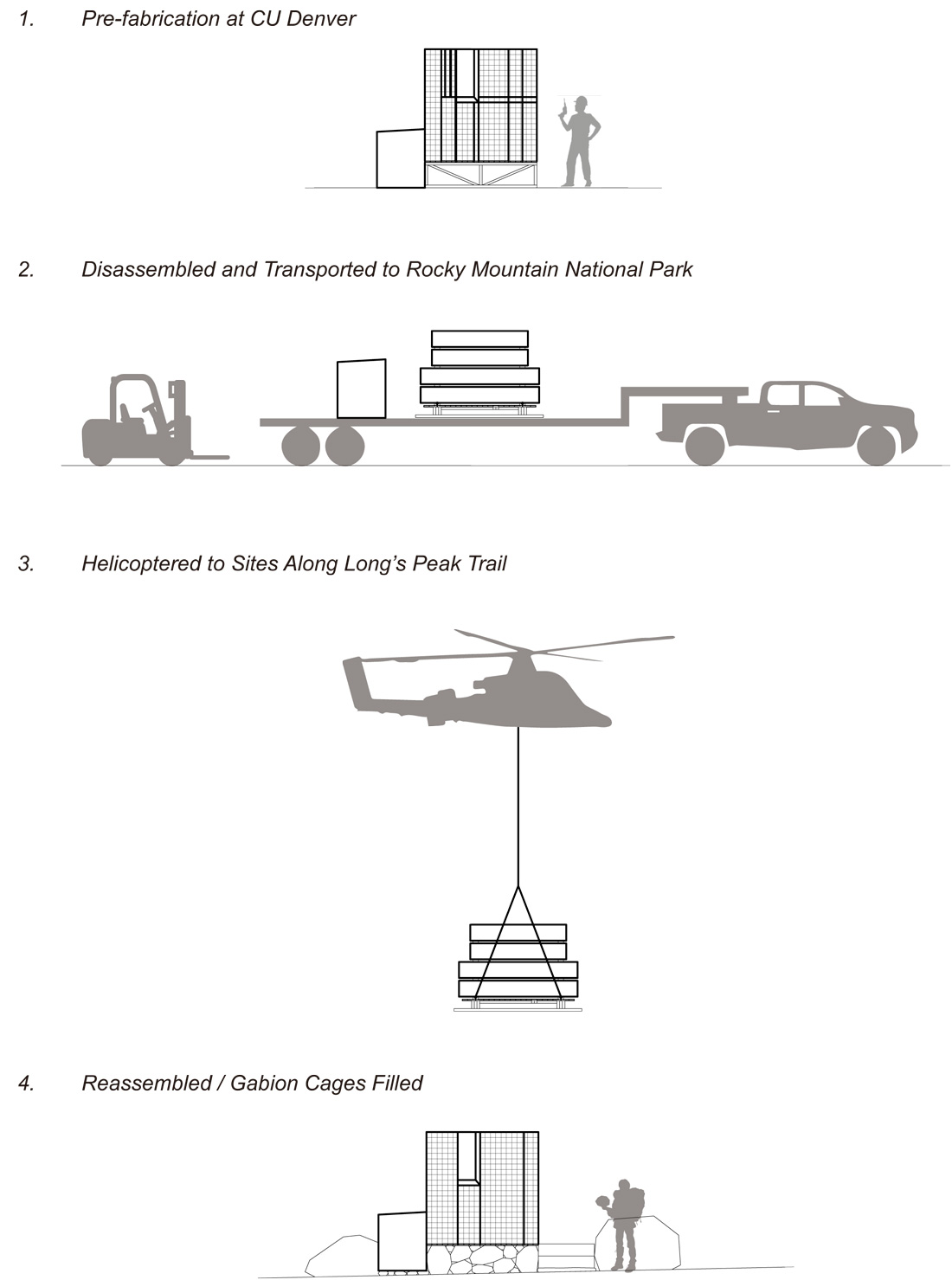 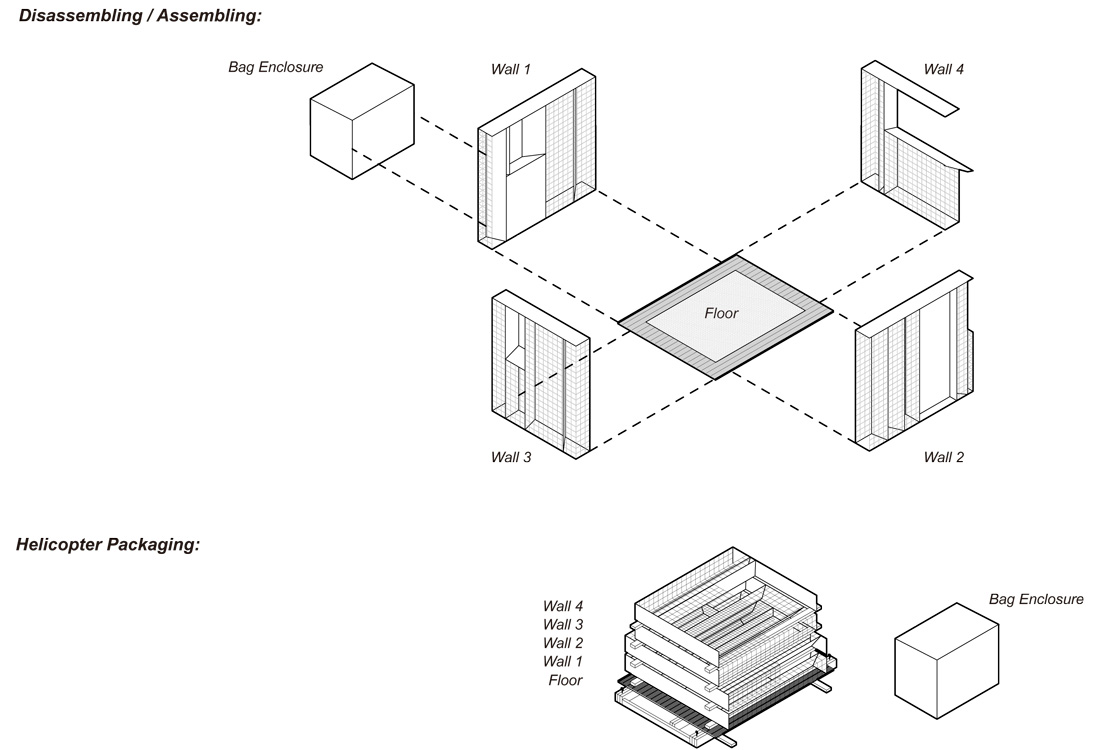 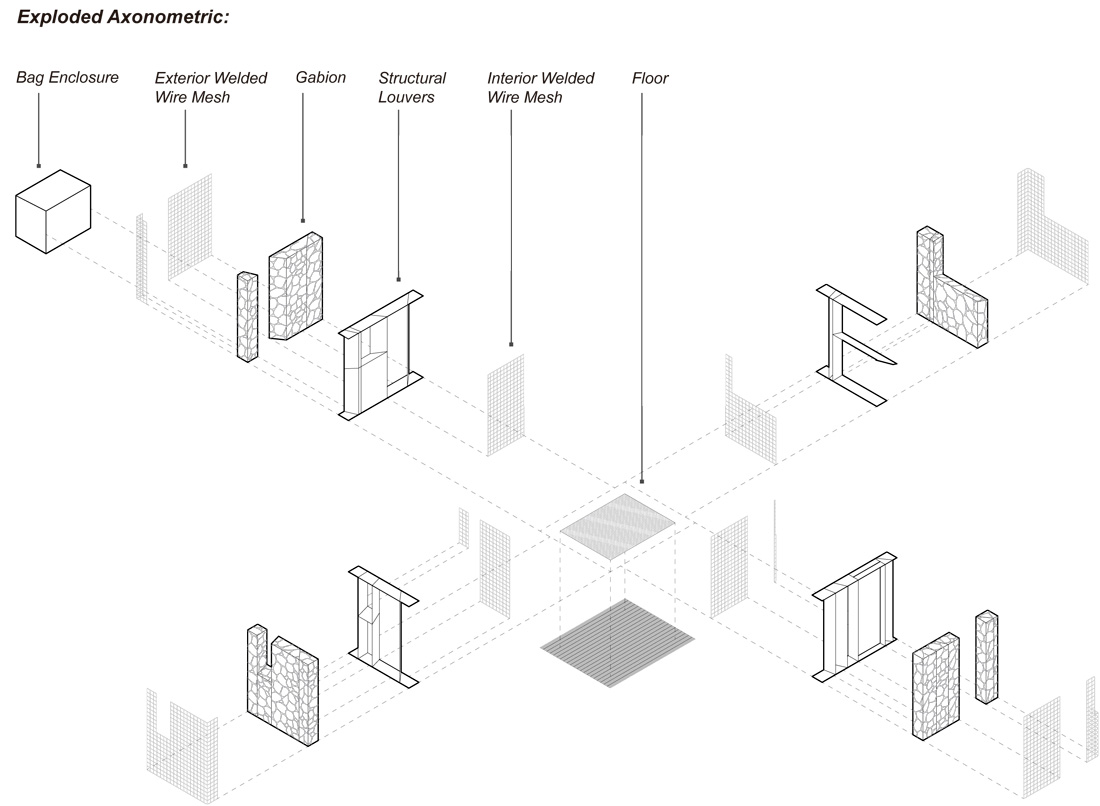 Based loosely on Toyo Ito and Cecil Balmond’s structural solution for the Serpentine Pavilion in 2002, the ROMO Privies used 1/16” steel plate louvers as moment frames. Light enough to be lifted by a helicopter but strong enough to sustain winds in excess of 200 miles per hour, each structure is comprised of four walls and a waste enclosure box. Each of the steel fins between the gabion modules act as moment frames connected by a ring plate above the walls. The ring transfers the lateral loads from one leg of the moment frame to a matching plate on the opposite wall. To keep the structure as light as possible, the rocks in the gabion are collected on site. The stones act as ballast for the structure and laterally brace each of the 1/16” thick steel plate moment frames to prevent them from deflecting. The system allows the gabion walls to be reduced from the recommended 18 inches in thickness to 12 inches. This minimized the on-site construction and rock collection, reducing the impact on the flora by 33%. 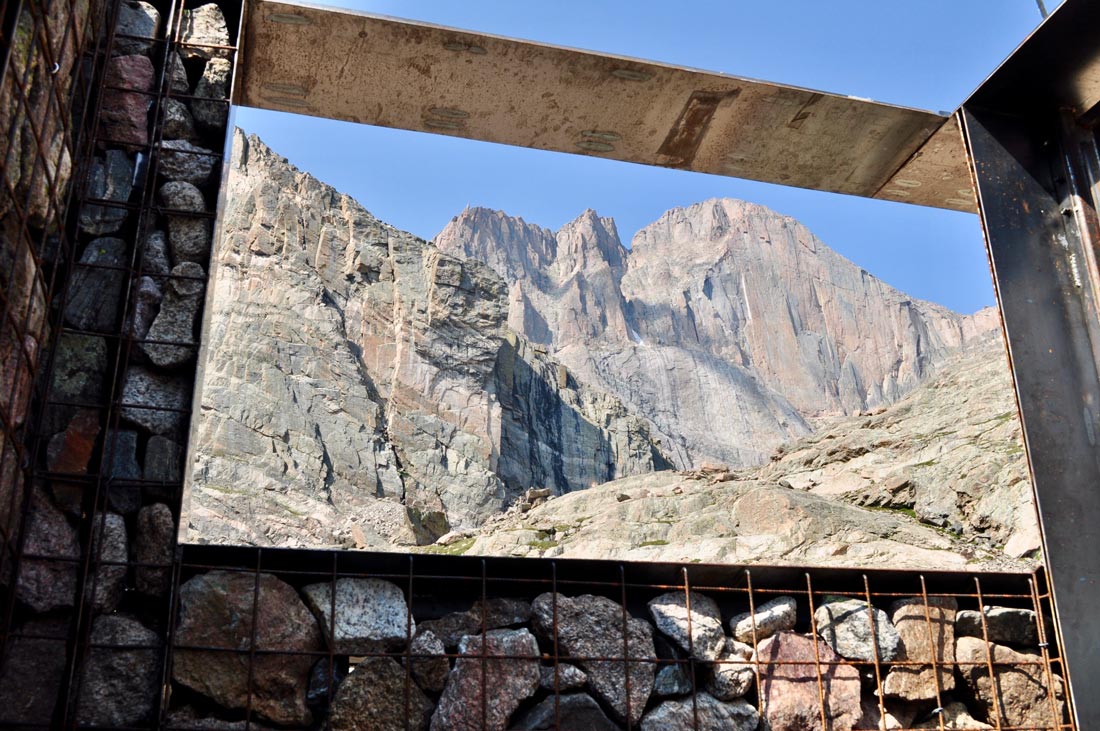 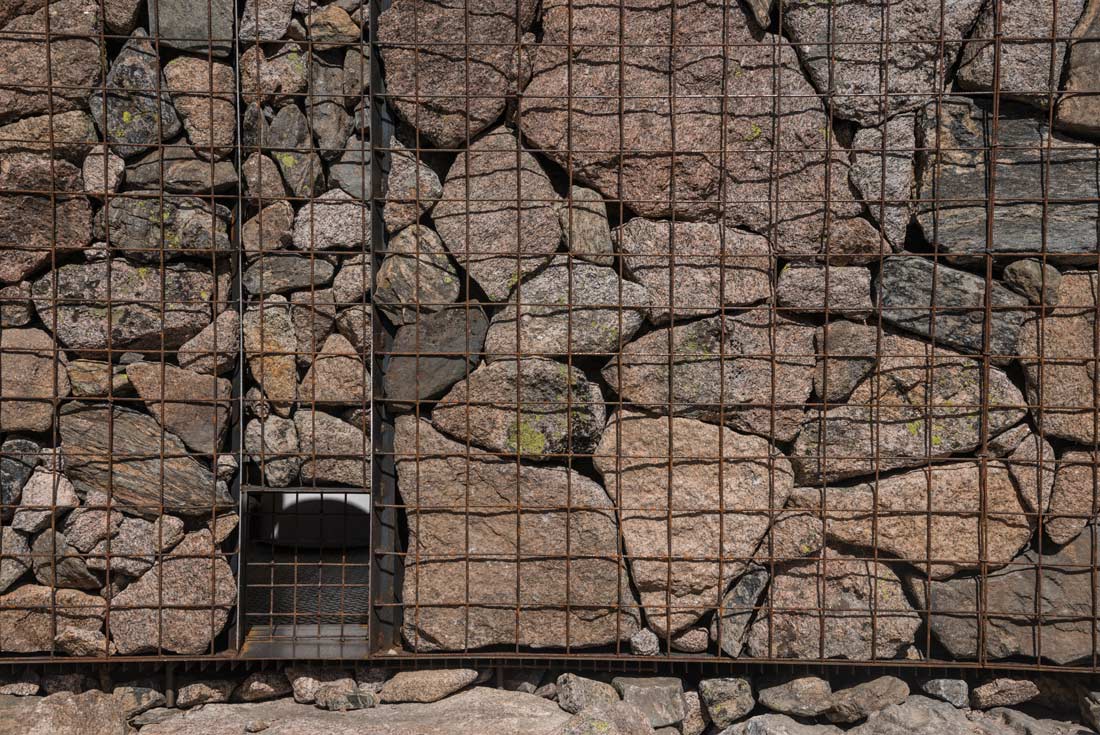 The new waste collection system utilizes urine diversion technology. The equipment separates the solids from liquids to minimize the overall weight of the waste collected. The urine is diverted into a filtration system, while the solids are carried on a conveyor belt to the waste bag enclosure on the back side of the structure. Since the system does not allow the ammonia in the urine to mix with the solids, the smell that most people associate with a vault toilet system is minimized. The lighter weight also allows NPS staff to reduce the number of trips up to the sites. The plastic bags that hold the waste create a more humane way for staff to collect feces by limiting their interaction and eliminating the need for shovels. 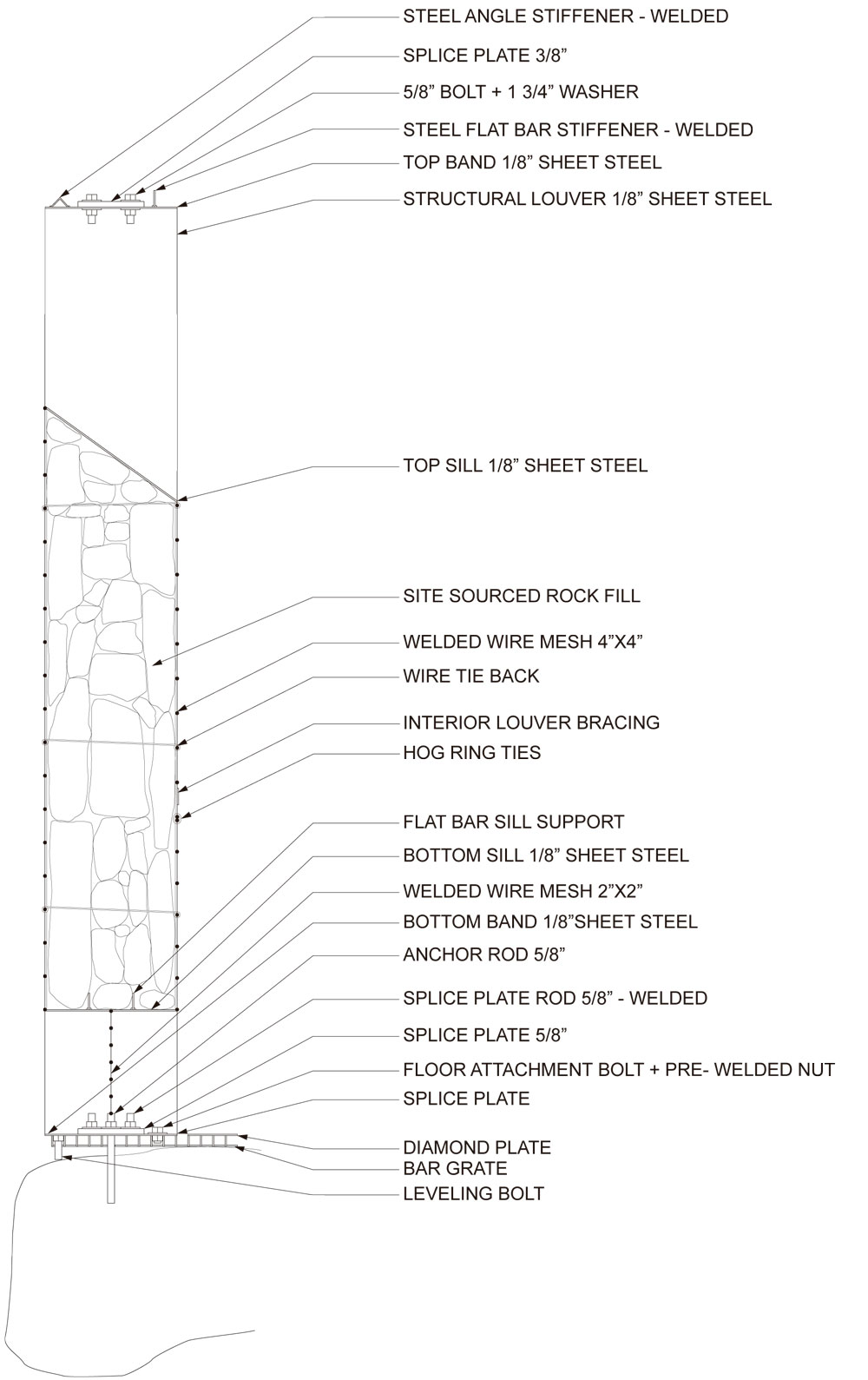