The City of Ghent is larger than Ghent itself. Ledeberg, Muide, Meulestede, Gentbrugge, Brugse Poort: these are some of the urban districts that have been amalgamated into the municipality of Ghent. What was once the Town Hall of Ledeberg is today designated as a Municipal Services Centre for the City of Ghent; an extension of the city’s administration, a welcoming hand held out to its newer citizens.

This has been the case for many years. In 2006, the city decided that the former town hall was due for a comprehensive renovation. The building was marked by the ravages of time, but it merited a new lease on life. 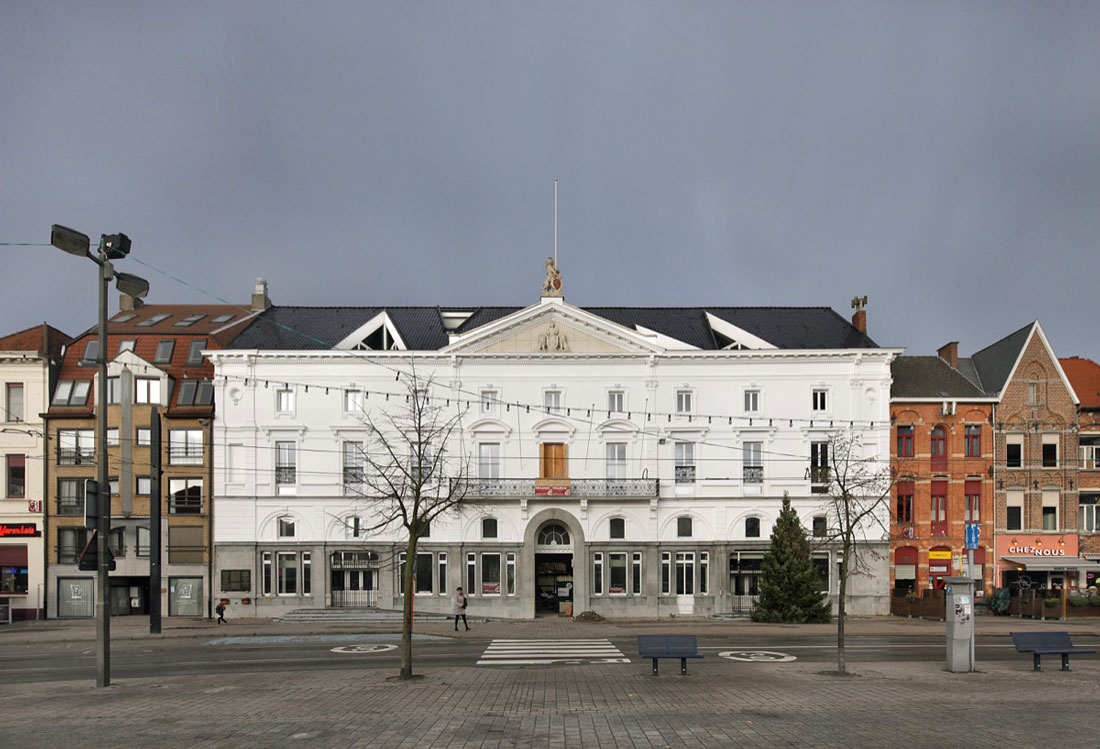 Before it became a borough of Ghent, Ledeberg installed a wedding hall and a magistrates court in the building, as well as a reception hall, with a stage, filling the whole of the first floor. The various municipal services occupied leftover spaces between the larger amenities. The mayor’s office was a remarkably long, narrow chamber at the front of the building.

When the building became a Municipal Services Centre for the City of Ghent in the 1970s, a local police station was added to the existing utility structures at the rear of the Town Hall. Like the other structures, it was a nondescript shed.

The Town Hall had undergone countless alterations over the years. Nothing was original except the front façade. The stately classical façade masks the original four-part design and all the later modifications. In its heyday it also sported a splendid cast-iron entrance canopy. This frontage, together with the church and the bandstand, set the tone of Ledeberg: an air of grandeur, a place full of life. As for the reception hall in the Town Hall – that was the festive heart of Ledeberg. 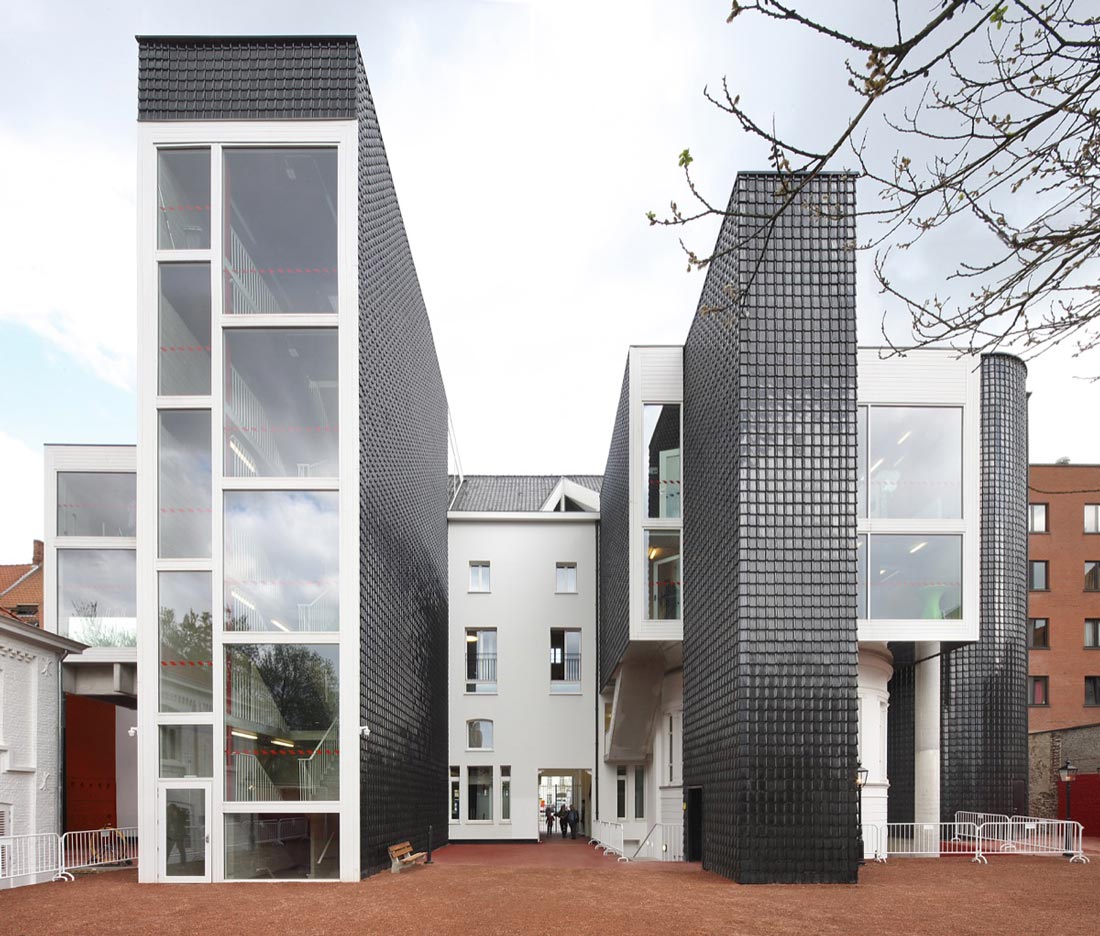 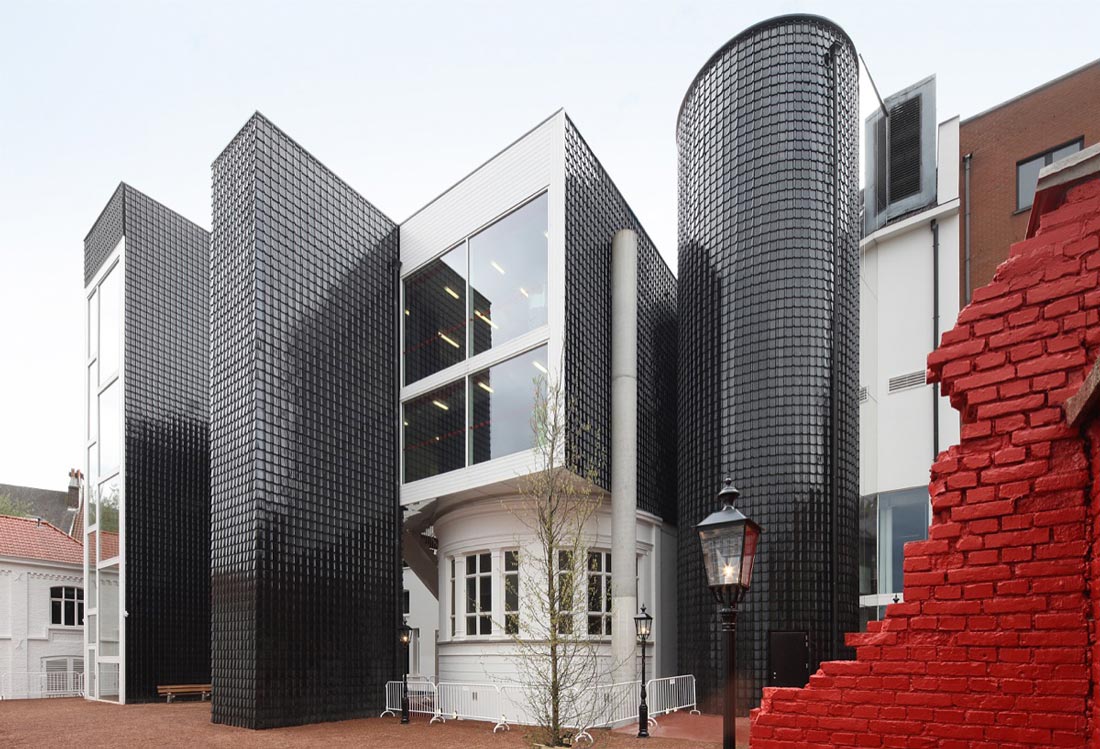 And so it was until 2006, the year of the closure and the renovation plan. The brief for the renovation, drawn up in 2006, also addressed the interior of the block behind the Town Hall; a new building was required to replace all the nondescript 1970s structures in the courtyard.

The City of Ghent was aware of the imperative to retain the reception hall, the very soul of Ledeberg, in the renovated building. The marriage hall and the courtroom, on the other hand, were to be repurposed

to meet municipal service needs. The Registry Office and the police station also had to be re-housed – the police especially.

In the proposal, these ambitious requirements were just the starting point for even greater ambitions. It was evident from the outset that constructing a new building in the courtyard invited questioning. At least, introducing those doubts such was a legitimate initiative.

Clearly, the existing building was an improbable tangle of corridors, rooms, mezzanines, hidden staircases and unused cellars. It even had a little old gaol. Trying to inject all the city’s new requirements into the already overstuffed body of the old Town Hall must have been seen as overambitious: hence the new building at the back. A purely arithmetical review confirmed an initial conjecture: there was actually enough room, but disentangling the puzzle seemed insurmountable. 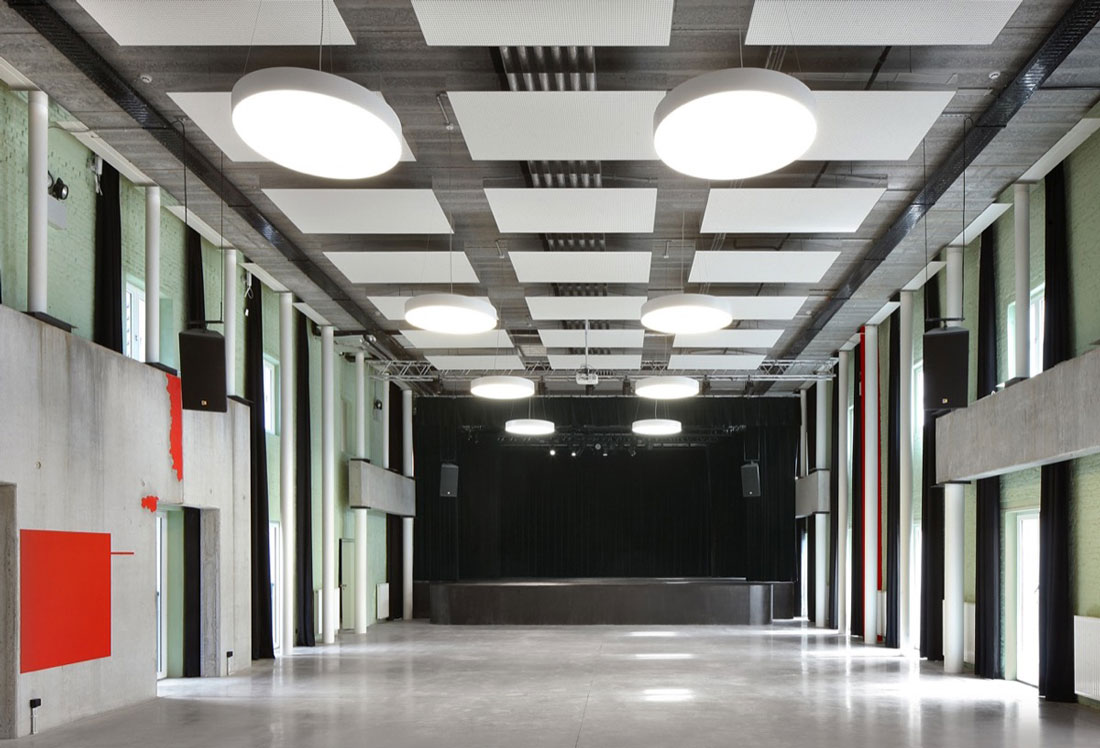 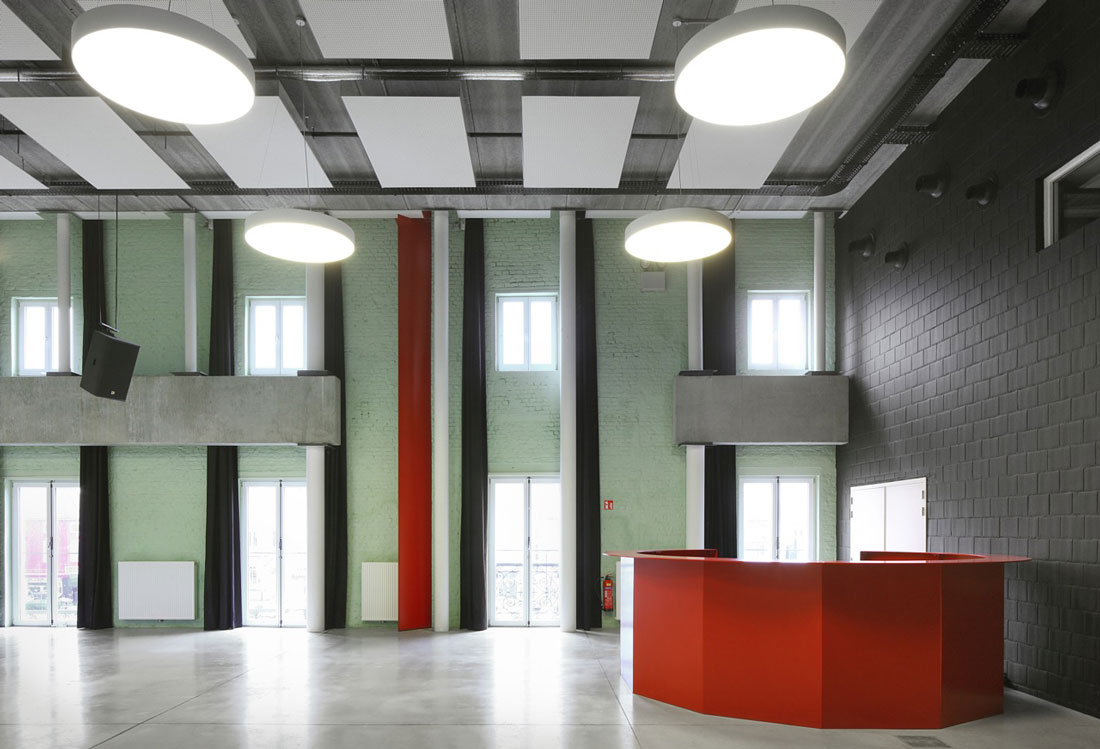 Optimism must have been the driving force. With calculation and some clever chess moves, the puzzle had some prospect of solution. An inauthentic three-metre-deep extension across the whole width of the rear was mentally excised to make way for a strange juxtaposition of ostensibly disparate elements – which nonetheless seemed to go together. Stairs, lifts and auxiliary rooms, such as a foyer for the reception hall, were arranged along the length of the original building’s oblong volume. Each had its own logic and proportions, but they were joined nonetheless. The rear façade was now deeper than before in some places, but much less deep in others. Perhaps this idea was prompted by the old marriage hall, for its rounded transverse extension already protruded into the block interior. And these protrusive bodies are equally part of an already strange collection of buildings at the rear of the building. Everything falls into a composition. The existing building did not fully reveal its past until construction was in progress. The suspected four-part design was confirmed. However, the condition of the structure proved worse than had been expected.

An almost-too-simple idea was sufficient: a structural concept of stacked tables reinstated the diversity of heights of the floors, stacked up over the old marriage hall and law court, leaving the entire floor space of the reception hall free. The legs of the tables – the columns – are closely

spaced. This is not only an advantage for the foundations, but it makes the intervention graphically clear. It also makes it possible to use relatively slender columns. Finally, the columns all have different cross sections – not only per floor, but also between the columns on each floor. In that respect, each column expresses the forces it must bear. 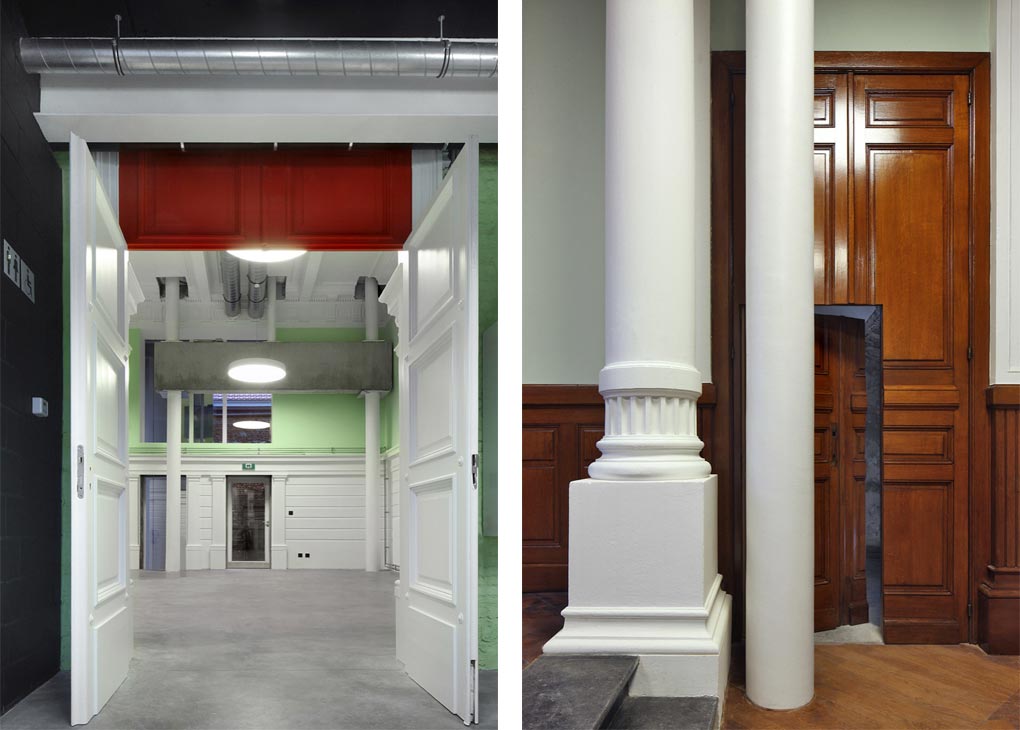 The strategy was to accommodate all the intended users in the building without erecting anything new in the block interior. Thus, the police were assigned a place at last: the previously unused attic, a virtual ship, is their new eyrie. With the table-top floors and the added sections on the rear façade, the attic is no longer really worthy of the name attic. It has become a comfortable, reachable top floor where its occupants can work undisturbed. The distance from its public presence on the ground-floor level is bridged perfectly by the staircase tower and by the intervening service floors.

The front façade gets back what it deserves – its dignity. The return of the canopy in a new configuration (the old one survives only in photographs) puts a frame around the dignified façade as it was formerly meant to be, and has been made possible today. The building deserves it. The public square deserves it. Ledeberg will have its City Canopy (Ghent has its City Hall).

An additional building was avoided. Optimal utilization was achieved, as sustainably as possible. 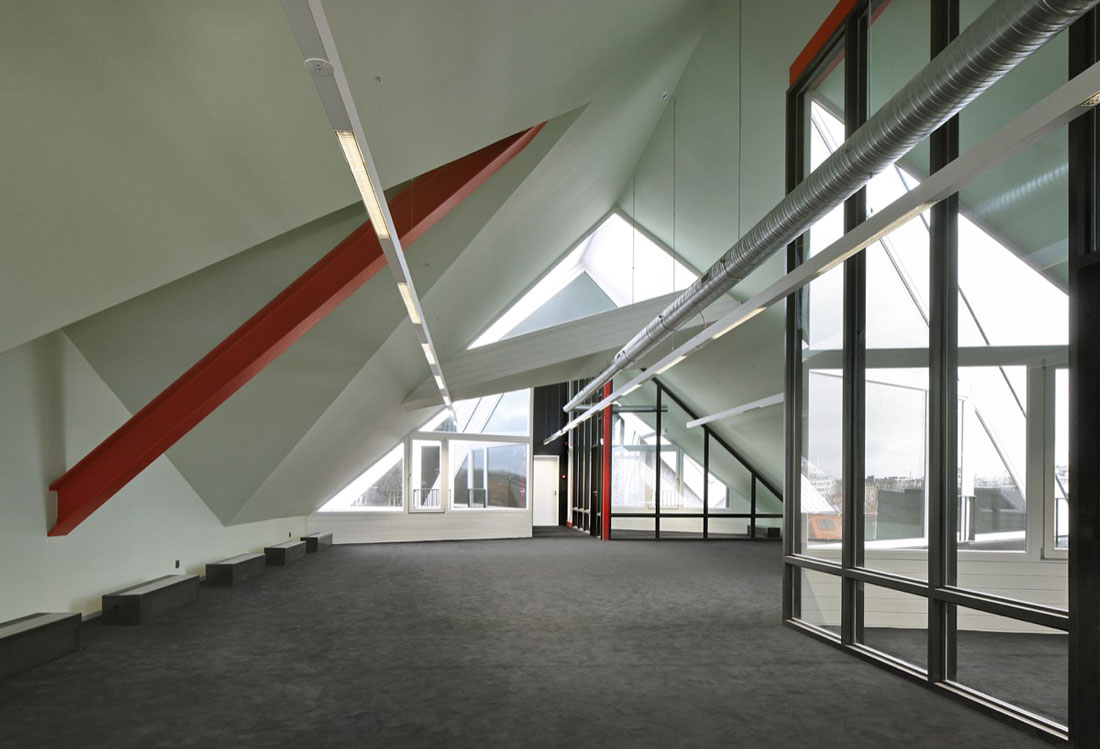 The old Town Hall forms one side of an urban block. At the request of the City of Ghent we drew up an idea for that building. The question was how to provide access to the interior of the block. Could everything be organized differently in that interior area? At present, the area is filled with decrepit garage sheds. The assumption in the brief – although non-explicit – was that the area could be used for public gardens and a children’s playground. However, a scheme emerged which may be better suited to the wishes of the neighbourhood. A tree-shaped drawing of an access route and the redivision of the area into no-nonsense allotment gardens yielded unexpected fruits: everyone gained a different bit of garden and an individual gate to it. A paved area may serve just as well for parking the car as for a summerhouse. It’s what people want.