The reorganisation of the space bounded by Itàlia Avenue, Mònaco Avenue and Verdi Street in Badalona begins with a municipal site that has been unoccupied since 2013, with trees lining the streets (plane trees and nettle trees), which were to be preserved. The architecture project responds to a twofold interurban and local scale. In the interurban fabric, it aims to strengthen the continuity of the green axis that joins various parks and plazas near the river Besòs before connecting with the parks in Montigalà. At the local scale, the aim is to articulate the routes that converge here and create a play area for children of different ages, given the space’s strategic situation near the district’s schools and pre-school centres. 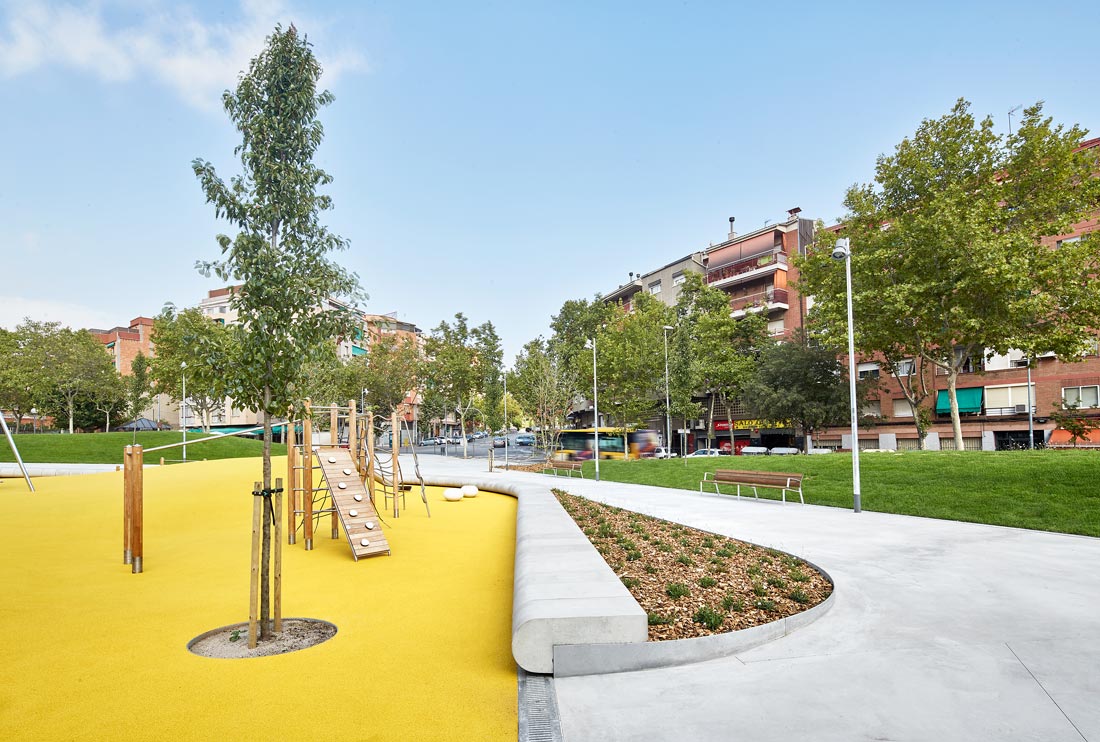 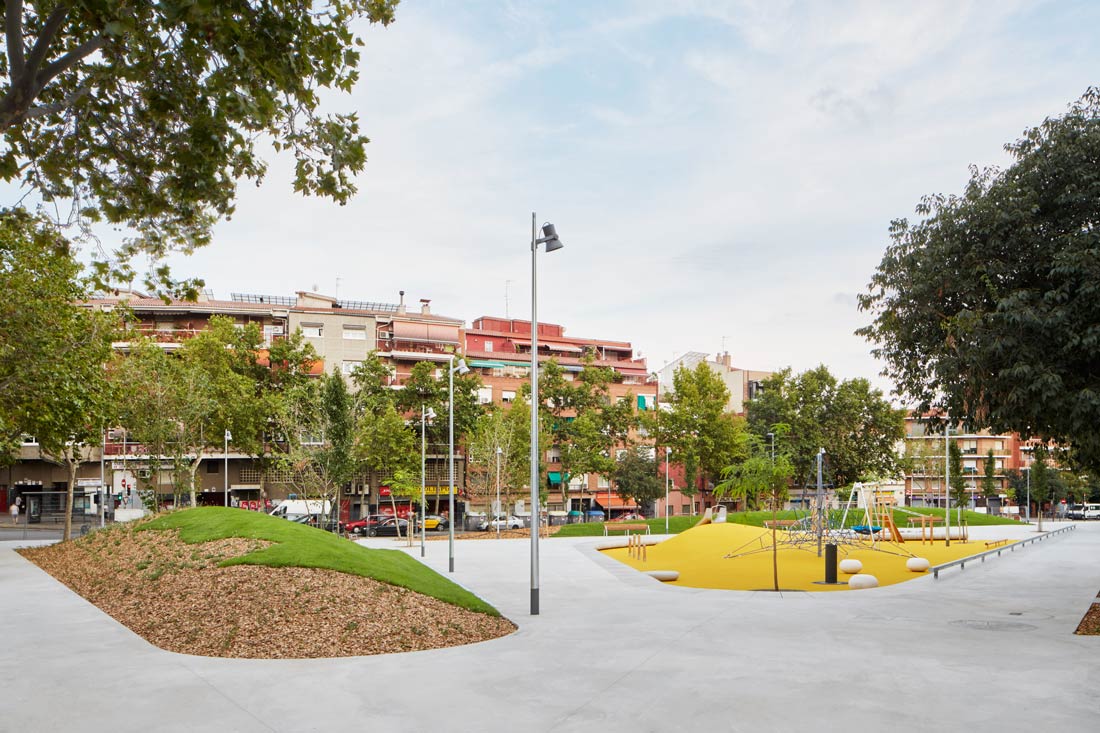 The project offers topographical continuity that eliminates architectural barriers, connecting the existing zebra crossings with diagonal paths that are long enough to create practicable slopes and widen at points to create spaces where people can sit and enjoy the space.

The natural topography of the site is modified to accommodate the proposed programme. Two dunes, planted with grass, creepers and shrubs, offer protection from traffic and a changing landscape with the passing seasons; the play area, marked out by a gentle hollow, takes the form of a yellow rubber dune, a soft material to cushion falls, which, like a game board, invites children to join in. 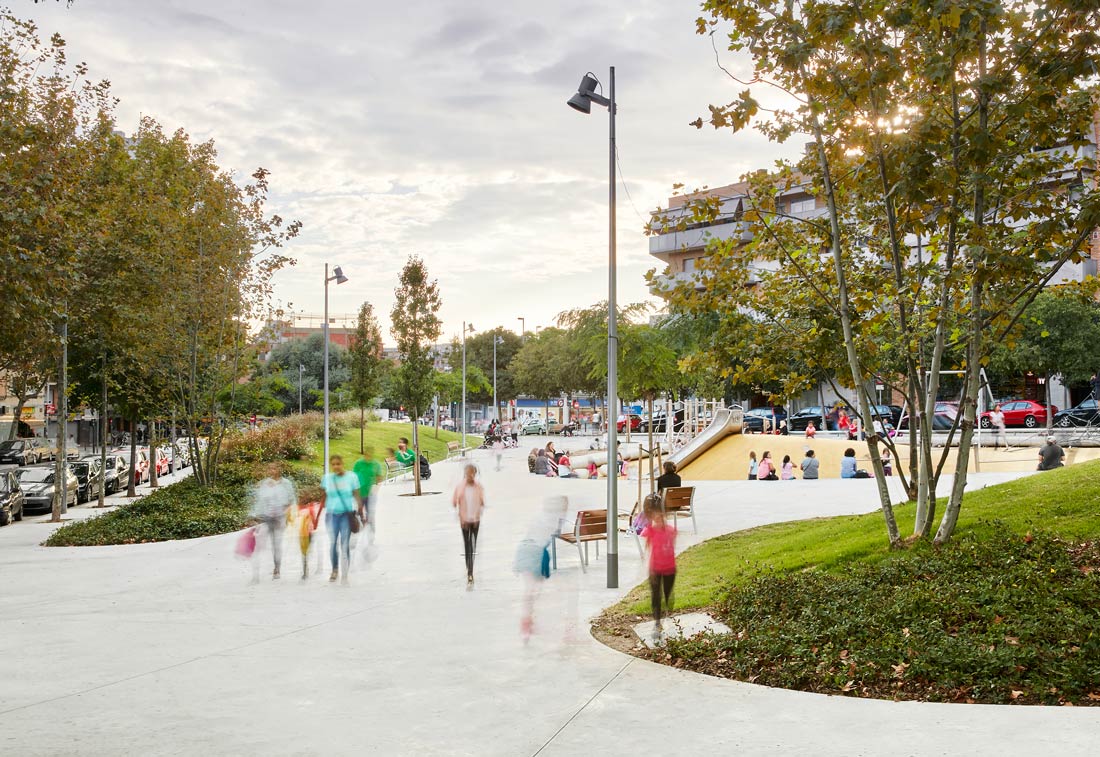 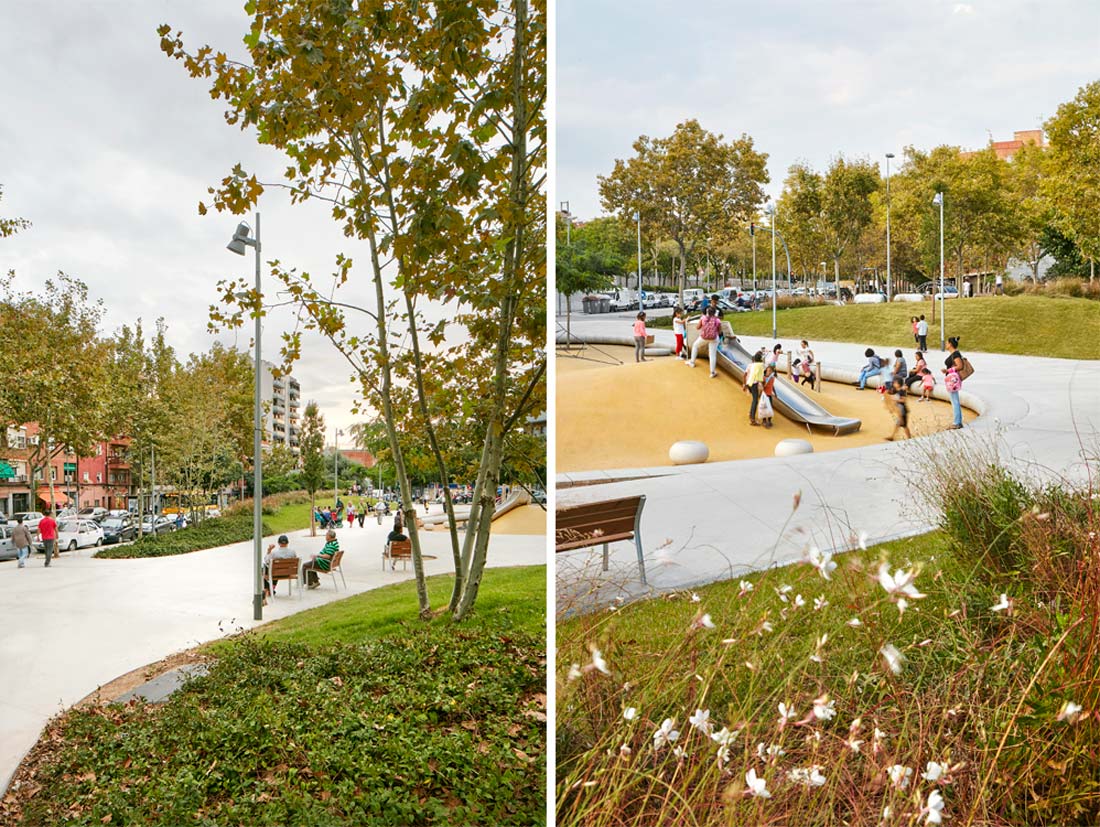 Prefabricated concrete is used to make up the difference in level in the play area, its geometry lending itself for use as a bench, as well as stimulating children’s imagination so that they appropriate public space. In this way, the fences separating children from adults are eliminated in an integrative, intergenerational solution. The games offered are collective to encourage participation rather than individual play; transparent to allow adults to keep an eye on activities, and abstract to give free rein to the children’s imagination. 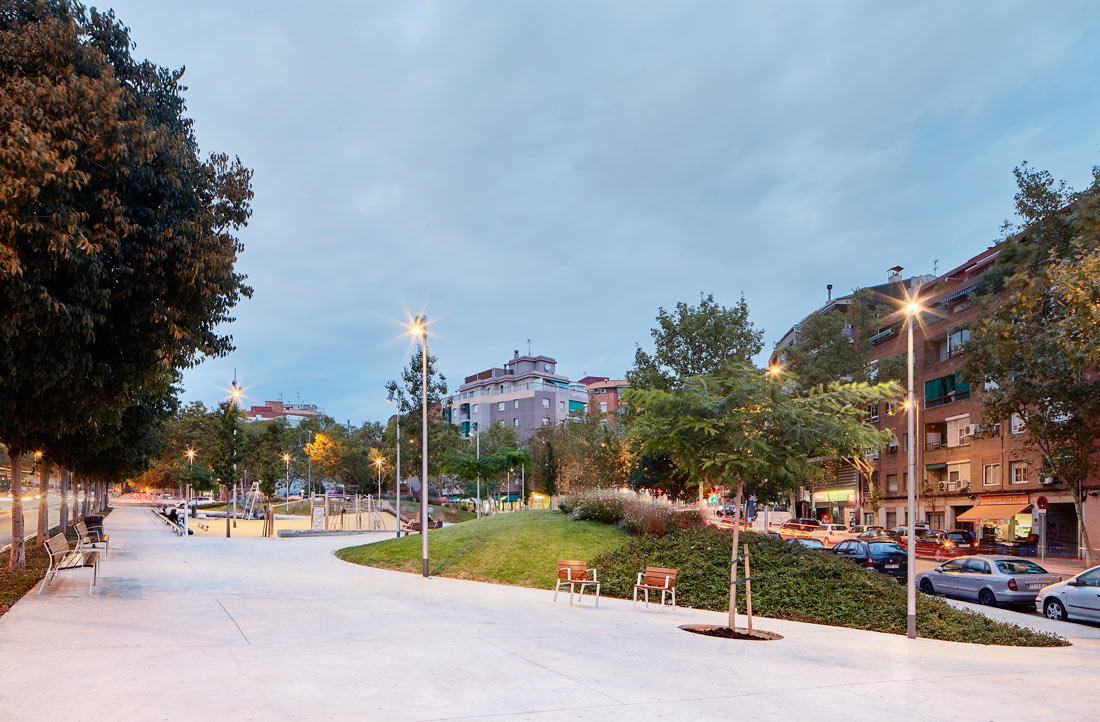 To create an arboreal mass that muffles the passage of traffic at this point and softens the straight line of the street, more trees are planted of the existing species (plane trees) and rosewoods are introduced to connect with the surrounding parks and guarantee the systematisation of this green interurban axis. 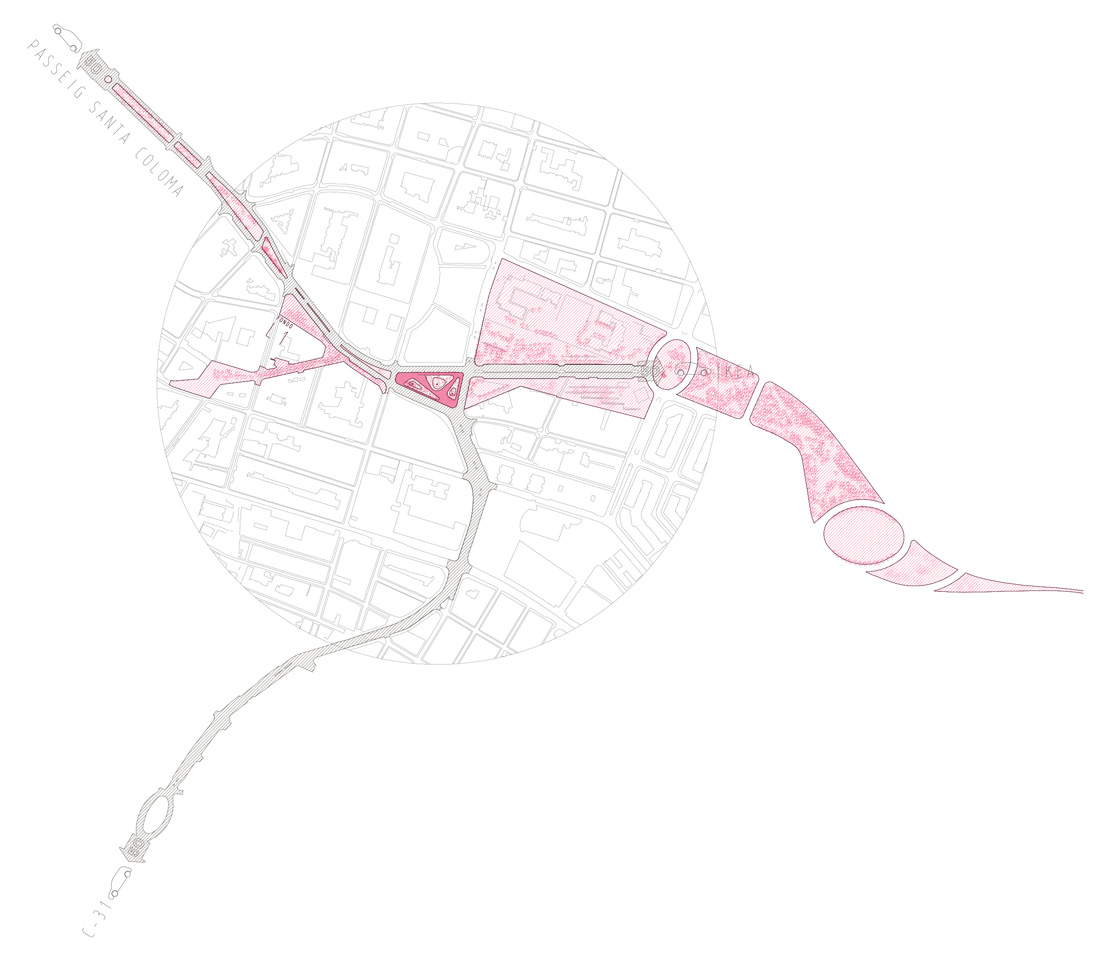 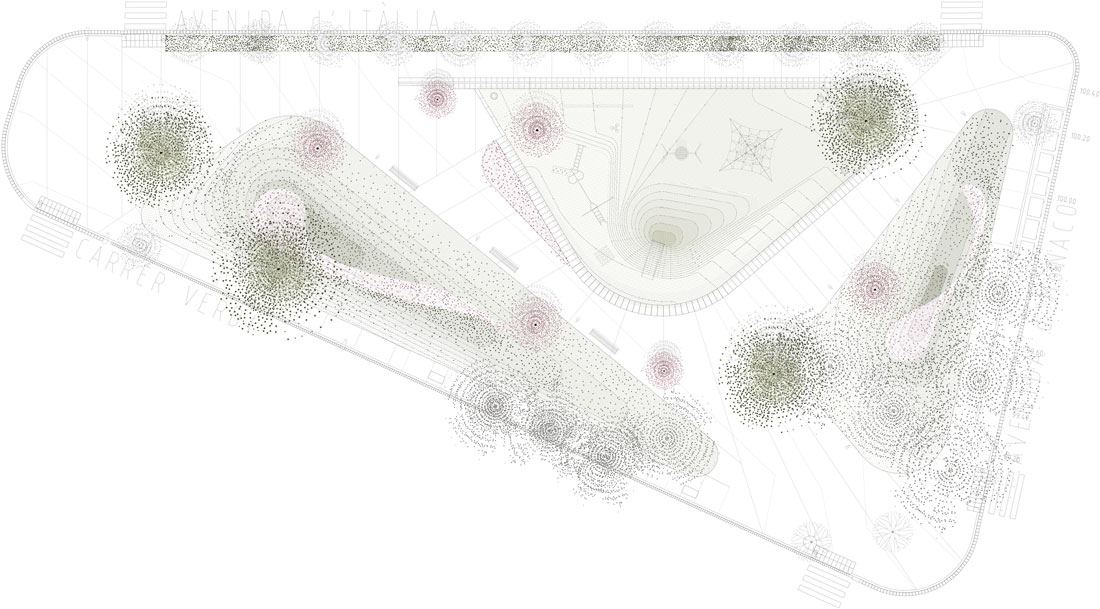 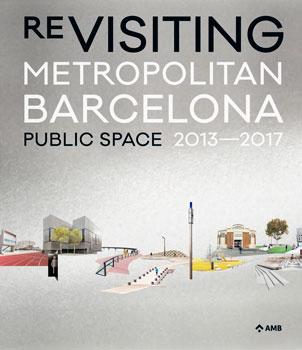 « From Transitory Urbanism to the Laboratory of Indifference
Urban Park Tultilan »