Freyming-Merlebach is a town with a substantial industrial past, in a part of Lorraine that developed in the 19th century, driven by the coal mining industry. 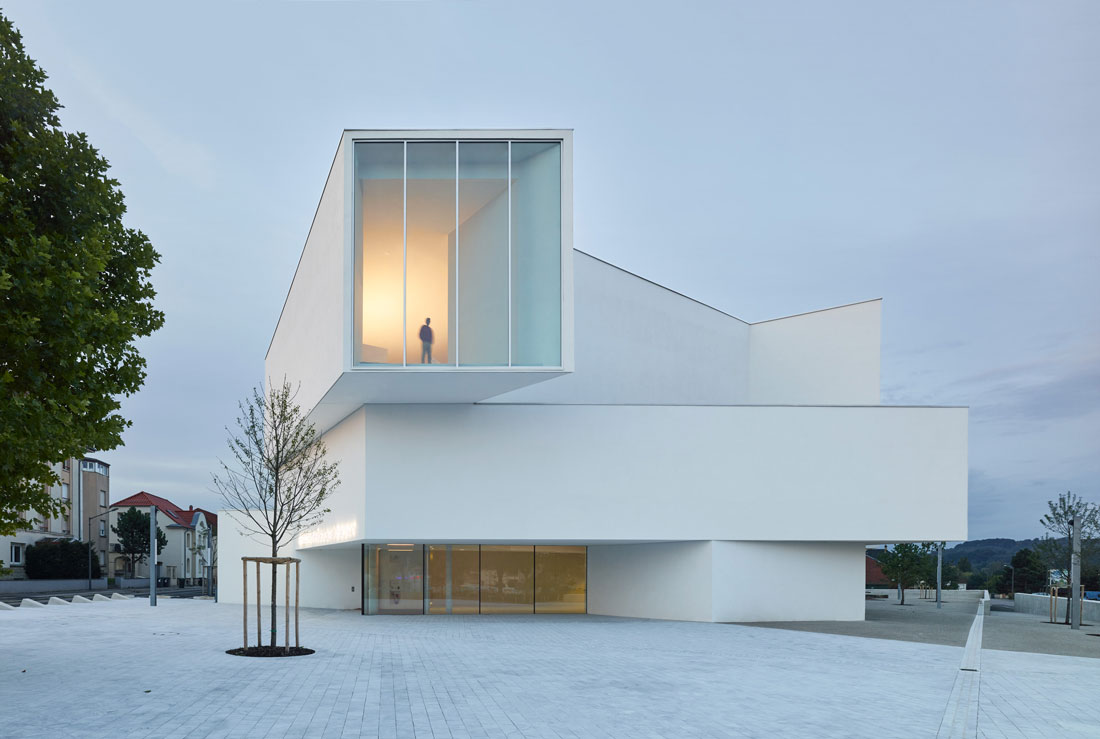 Since the closure of the mines in the 1990s, this part of north-eastern France has seen a sharp increase in unemployment, and culture is seen as one possibility for resolving the accompanying social and economic difficulties in the town, as has been the case in the neighbouring Ruhr region. The historic theatre in Freyming-Merlebach had deteriorated, and a number of cracks had appeared as the result of disused underground tunnels. The old 500-seat auditorium needed to be replaced, and it had also become too small.

The site decided on for the ‘Théodore Gouvy’ theatre is on the Place des Alliés, in Freyming-Merlebach. The municipal authorities were keen to give a new boost to this evolving sector, which is close to the town centre and next to the new town hall and a shopping centre. It is a prominent location, with sufficient parking capacity for the use of audiences. The theatre has become a symbol of the town’s renewal, and its position is generating a new public space in the town centre. The theatre’s programming is pluri-disciplinary, covering every area of live performance: classical theatre (including the use of large-scale sets), contemporary theatre, musical theatre and opera, dance, etc. The ‘Théodore Gouvy’ theatre offers local residents a 700‑seat auditorium, with dedicated areas for performers and logistics. 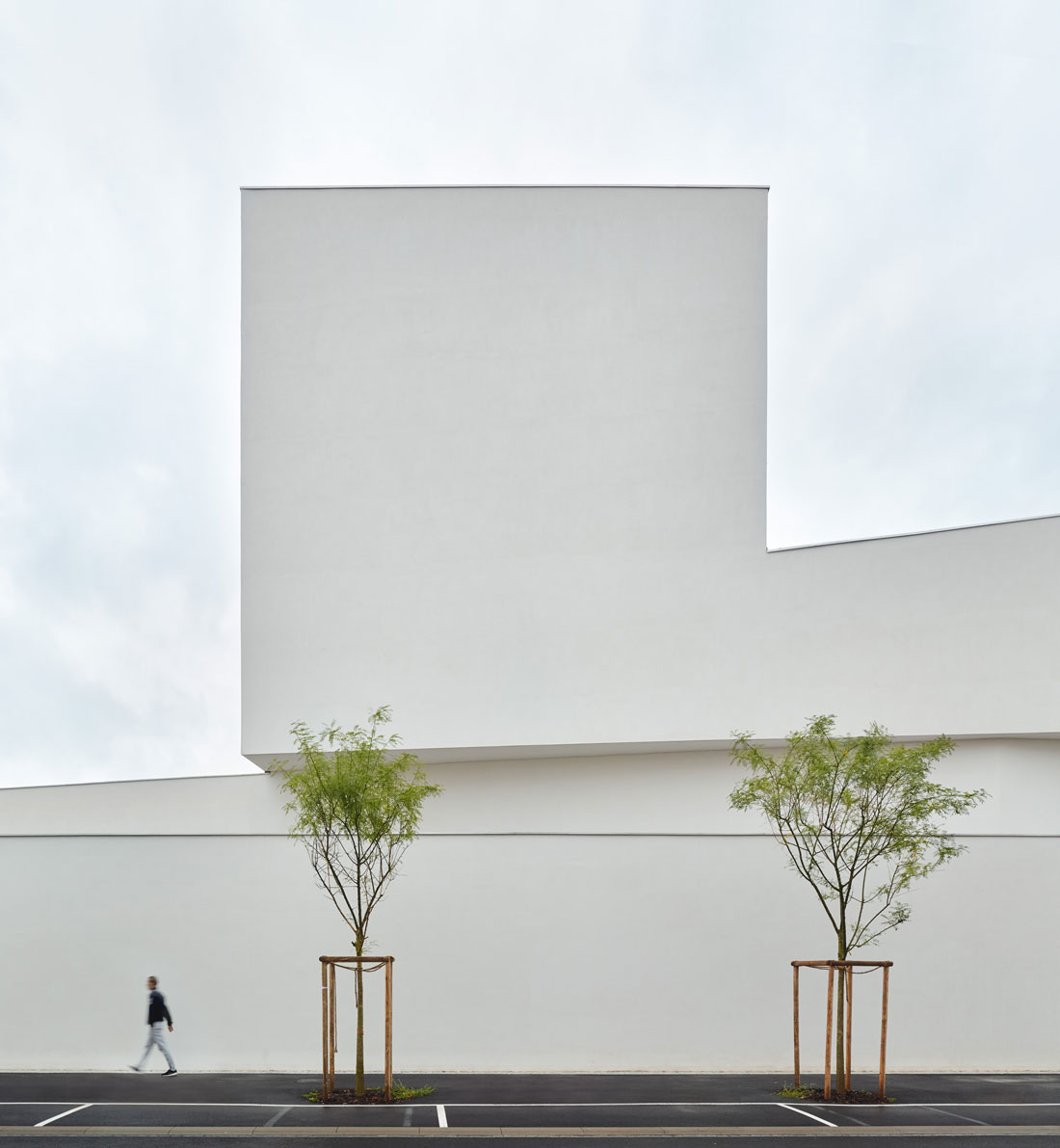 The theatre sets up an energetic dialogue with the heterogeneous urban landscape, shaping itself to fit the context and the logic of existing circulations. It stands on a base, alongside the new municipal offices; its unusual shape and dimensions give it a streamlined silhouette, the lines of which ensure visual transition between the various parts of the programme while keeping on the same scale as the town. The visitor’s interest is caught by the animation of the volumes: in the upper part, the foyer is offset to indicate the entrance, while in the lower part, transparent elements allow glimpses of the wealth of interior routes and invite the visitor to enter. 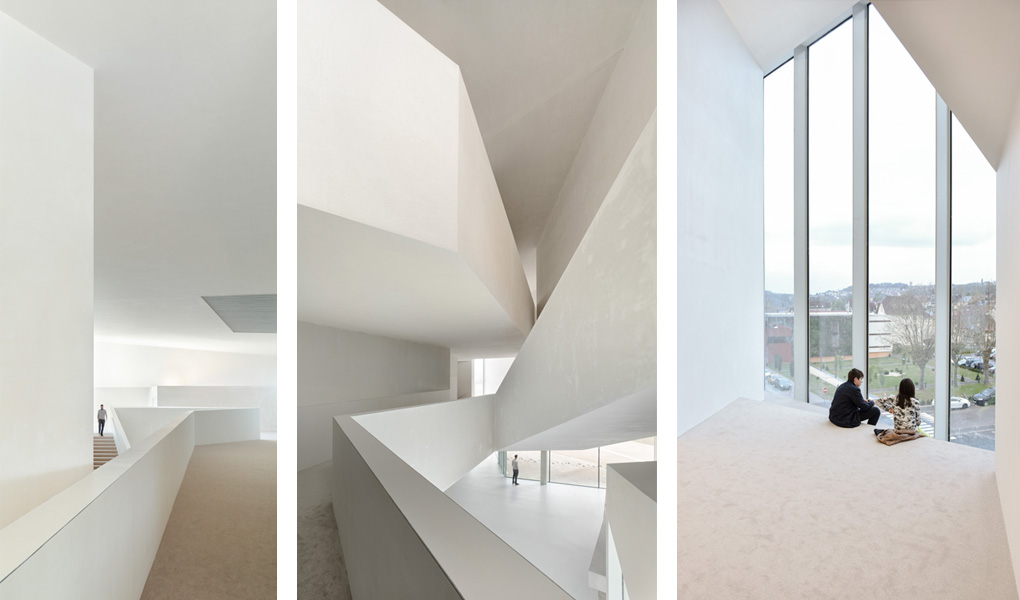 The foyer occupies a vertical space with a route through an apparent intertwining of staircases leading to the auditorium. Oblique lines reiterating the complex geometry of the site cause spaces to expand, creating a feeling of openness.

The uniformity of the untreated plaster and the softness of the carpeted floor contribute to the feeling of being in some kind of cocoon. Natural light enhances the various façades and reveals the building’s shape and dimensions.

The route to reach the auditorium is therefore deliberately spectacular and theatrical.

The auditorium stands out in strong contrast with the nuanced surfaces of the outer envelope. The building faces the town with an immaculate white façade, while the foyer is in shades of beige. The 700-seat auditorium constitutes a complete break with the foyers. Red, pink and orange lend density to the space, affirming it as the main feature of the project, with colour sanctuarising the idea of performance. 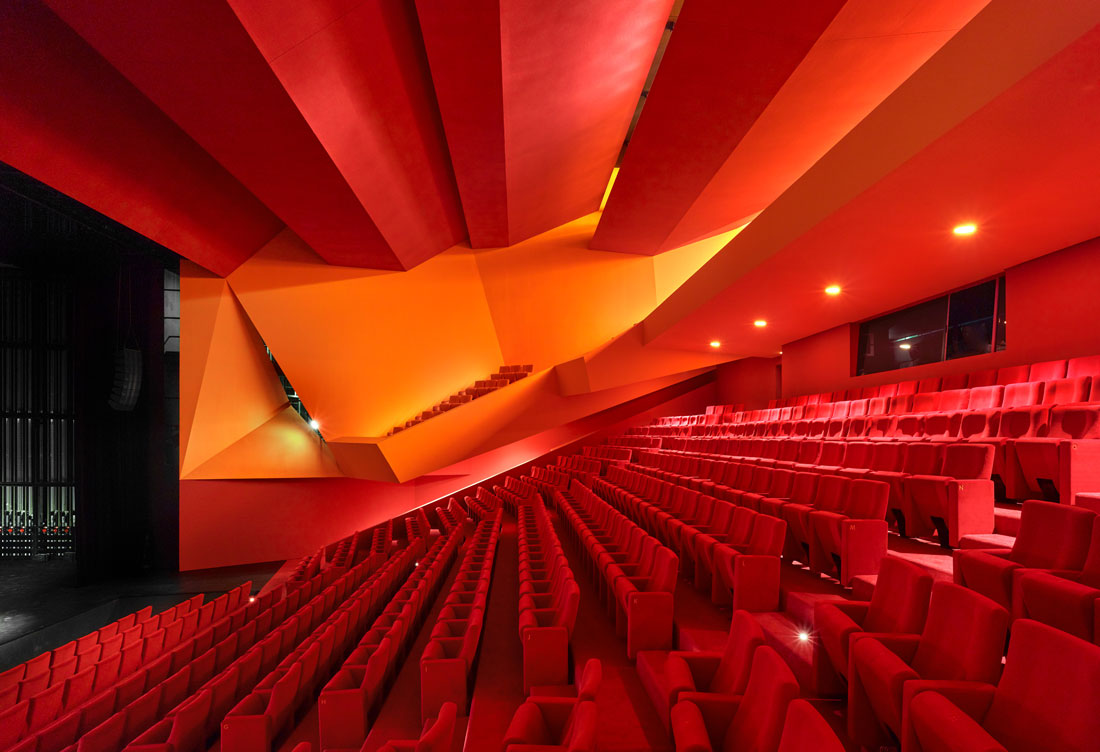 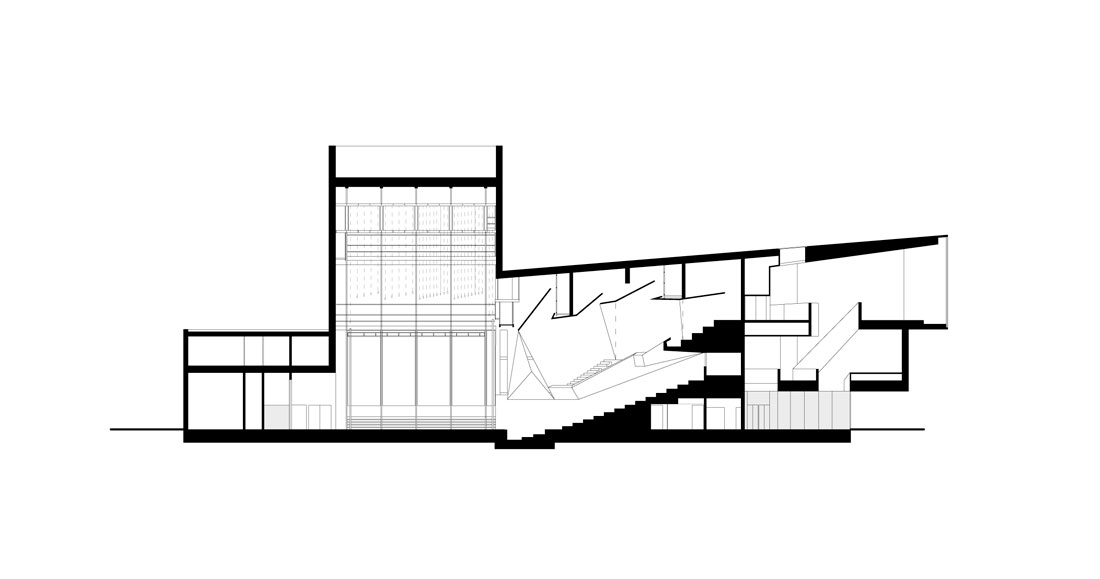 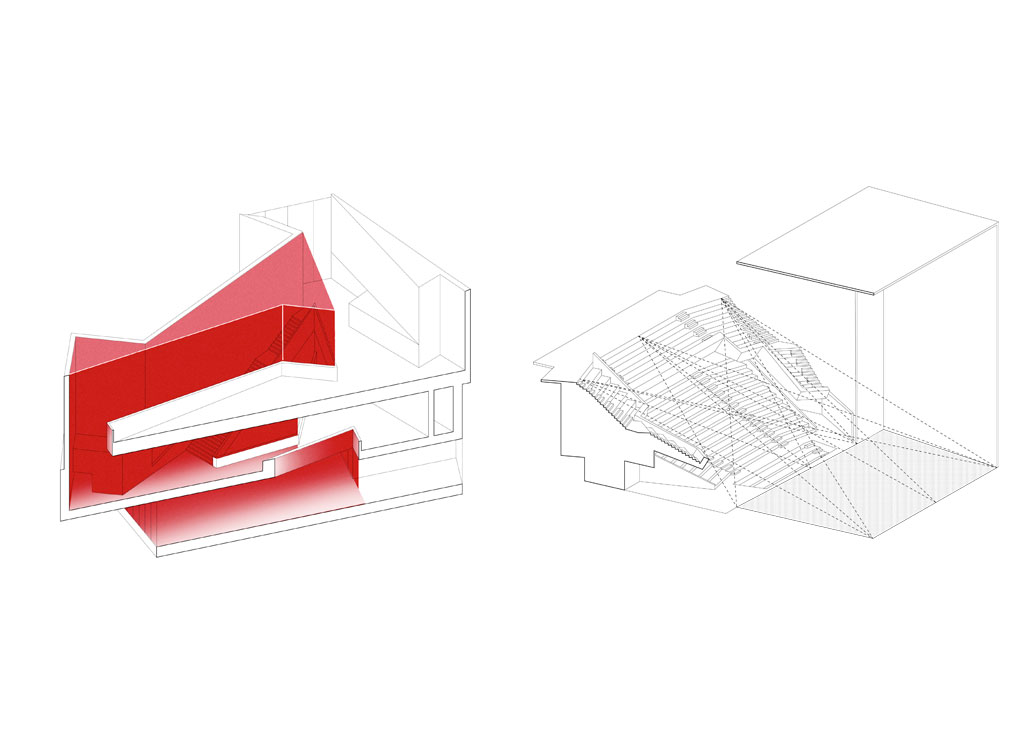 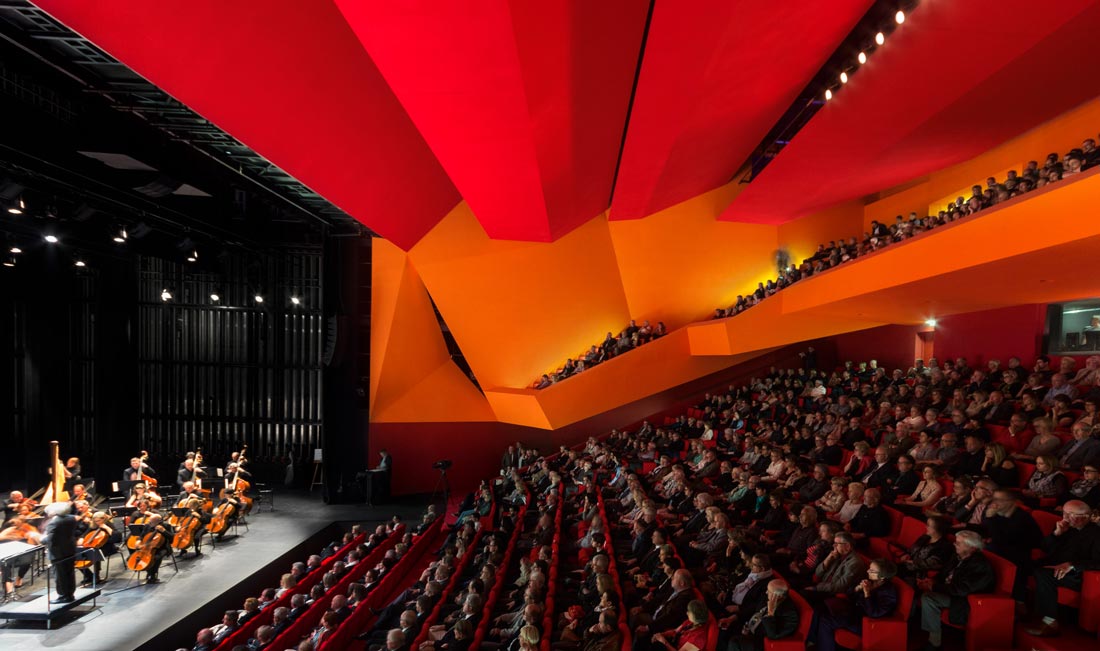 Visibility is optimised in the 700-seat auditorium: the most distant spectator is only 20 metres from the front of the stage. The foyer and public areas are flooded with natural light, varying throughout the day with the course of the sun. This evolving, dynamic spatial staging echoes the very image of the theatre.

The ‘Théodore Gouvy’ theatre offers exceptional acoustic and stagecraft properties; the stage house is 24 metres high, with a grid at a height of 17 metres and an upper grid at a height of 19.50 metres, a catwalk, and two bridges. These technical fittings are arranged around a stage measuring 22 x 14 metres with a proscenium measuring 14 x 9 metres. 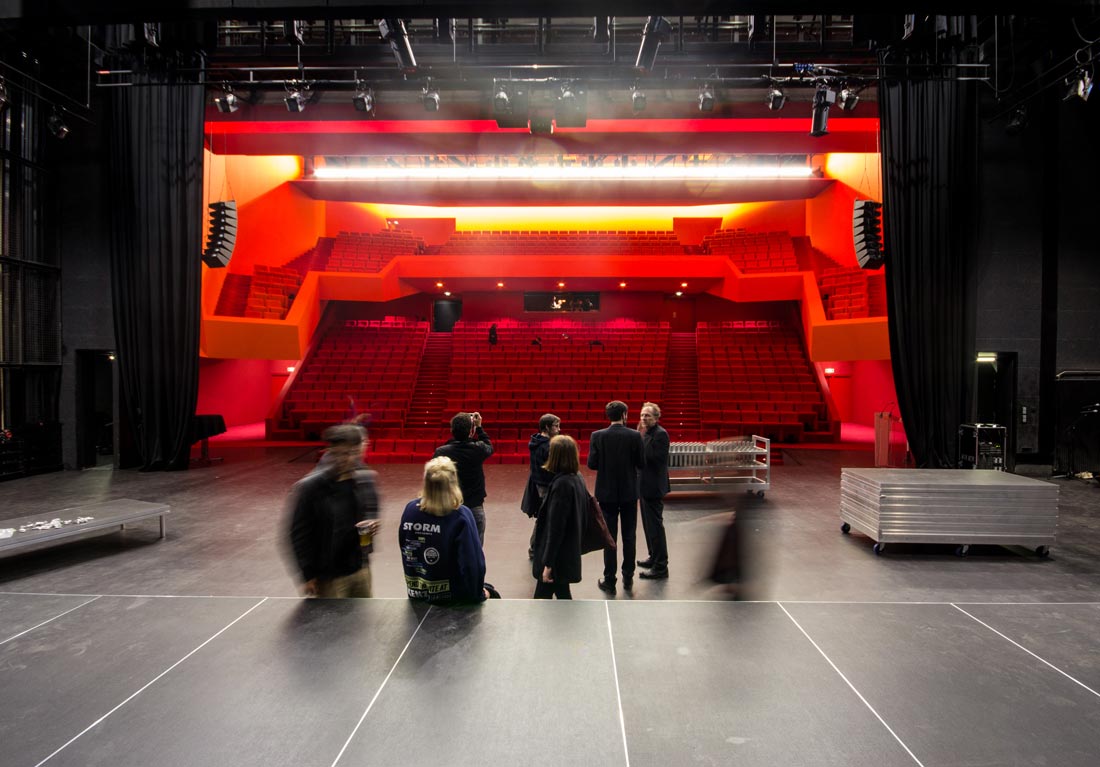