Hamburg has a new cultural landmark: the Elbphilharmonie, which has opened its doors on January 11 and 12, 2017 in Hamburg’s HafenCity. On the banks of the river Elbe on approx. 1,700 reinforced concrete piles a building complex has emerged, which, in addition to three concert halls, will encompass a hotel, 45 private apartments, and the publicly accessible Plaza with a 360° panoramic view of the city. The centrepiece of the Elbphilharmonie is also one of the most exciting structural challenges in Europe at the moment: A world-class concert hall at a height of 50 metres with seating for 2,100, which is decoupled from the rest of the building for soundproofing reasons. The Elbphilharmonie is the perfect symbiosis of architecture and music at a unique site within the historic city port. 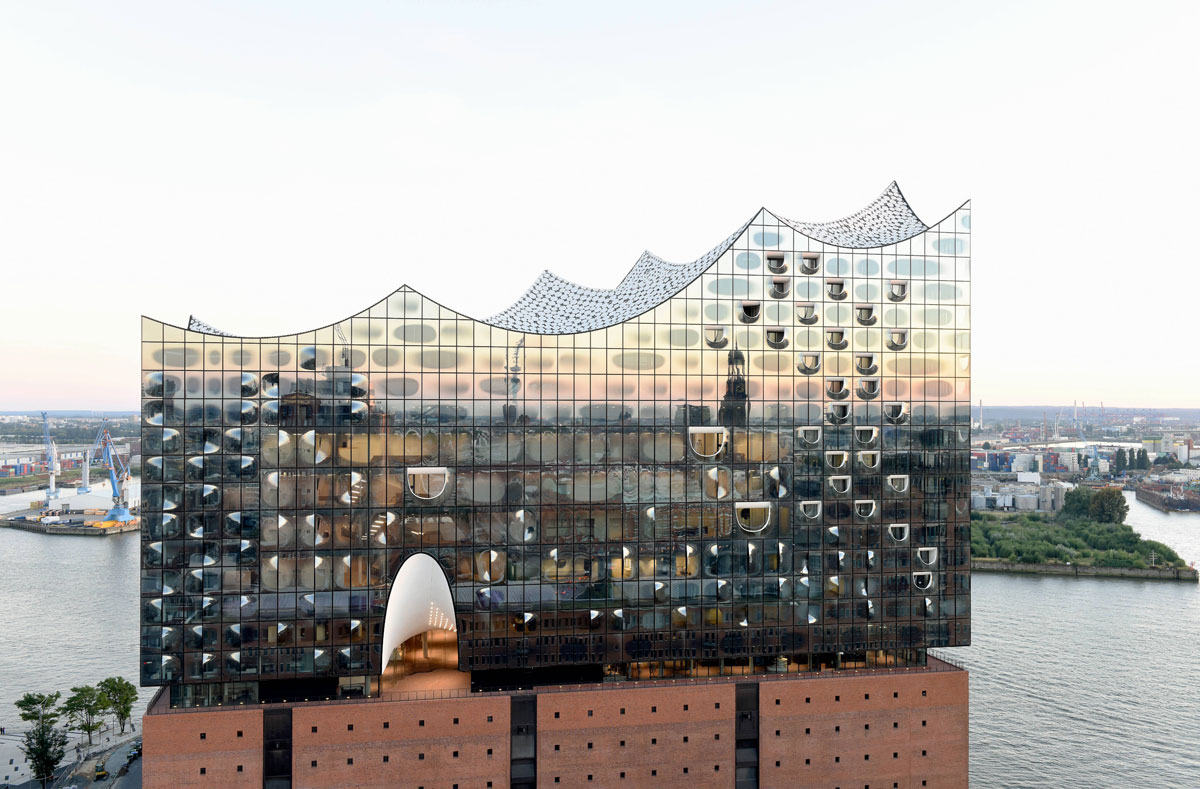 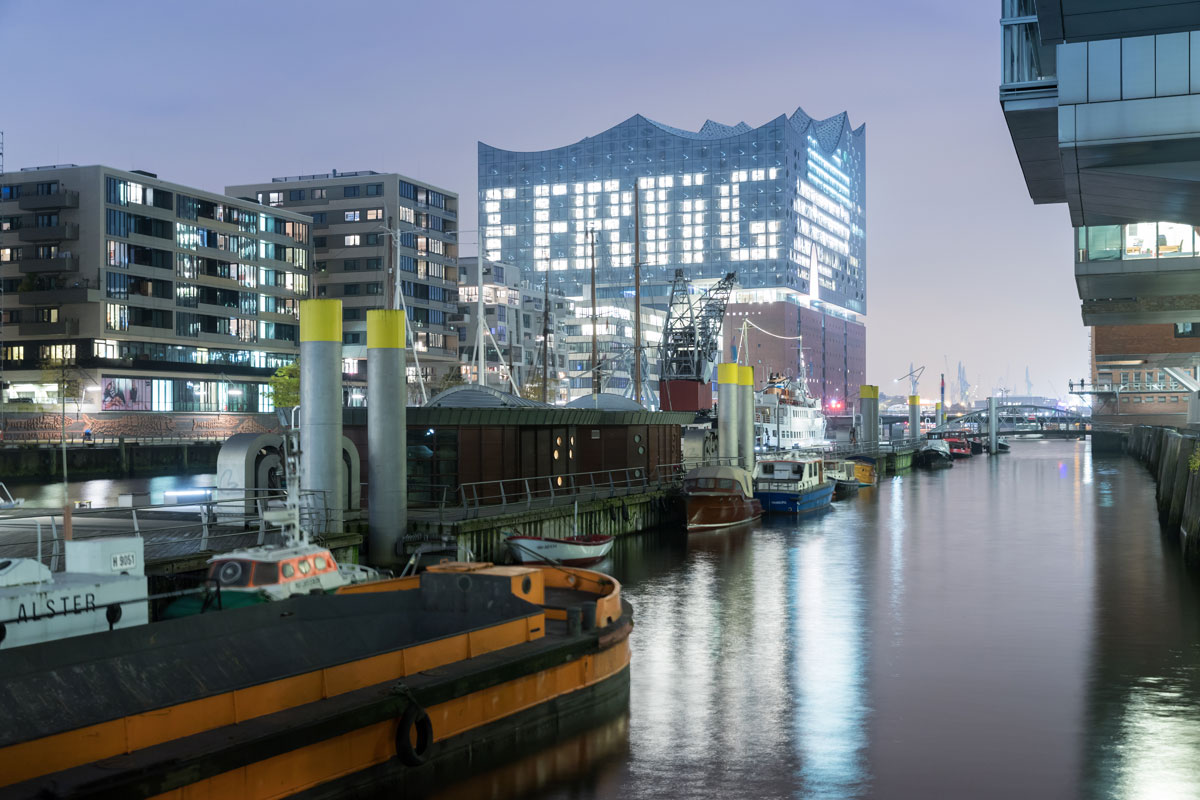 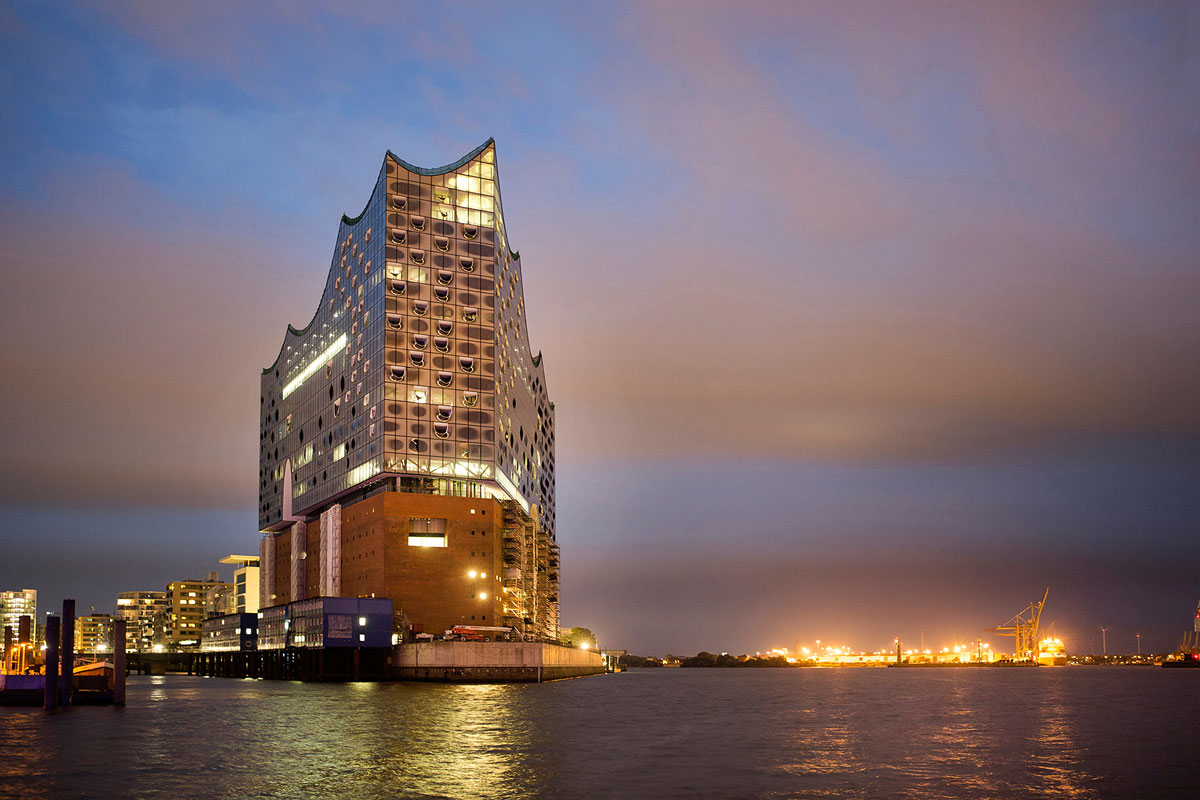 The interplay between the archaic appearance of the former warehouse known as the Kaispeicher A and the bold curve of the dazzling glass corpus is the architectural calling card of the Elbphilharmonie. Old and new conjoin in an exciting synthesis. Between the warehouse and the new construction there is an area accessible to the public, the Plaza. Nowhere else is the link between the docks and the city revealed as impressively as here. Visitors will be treated to a unique 360° panoramic view of the city from a height of 37 meters. Measuring about 4,000 square metres, the Plaza is almost as big as the one in front of the Town Hall and is an ideal place for Hamburg’s citizens and tourists, concertgoers and hotel guests to stroll. On the outside, there is a walkway around the entire building. On the inside are the foyers leading to the Grand Hall and the Recital Hall, a café and the hotel lobby. The Plaza will be accessible to any visitor, with or without a concert ticket! The Kaispeicher A itself will be used as a multi-storey car park with approx. 500 spaces. It also houses the spa facilities and conference rooms of the hotel, the music education area, several backstage rooms, and, not least of all, the third auditorium with seating for approx. 170. All this is contained within one building, whose impressive entrance is reached via an 82-metre long escalator. The escalator has a concave arch so its end cannot be seen from the beginning. The visitor is thus immersed into a glowing spherical tunnel. Glass sequins that reflect and refract the lights set the mood for the special ambience of this building. 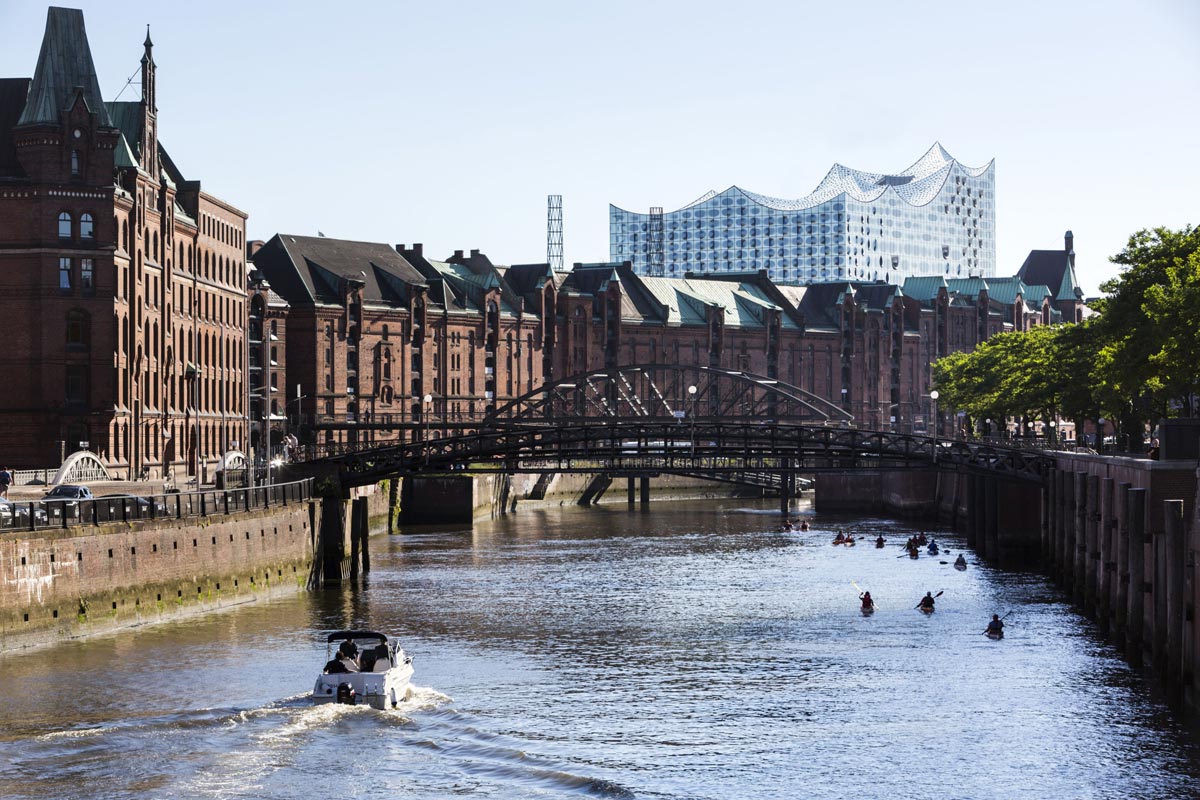 The Elbphilharmonie Hamburg is built in a historically significant place: in the Sandtorhafen docks. 1875 saw the construction of the first warehouse in Hamburg Docks here: the Kaiserspeicher. The magnificent neo-Gothic building quickly emerged as the city’s landmark while the city became a major centre of international trade. Almost completely destroyed in WW II, the Kaiserspeicher was detonated in 1963. In 1966 the Kaispeicher A was erected on the same site, based on a design by Werner Kallmorgen. Cocoa, tea and tobacco were stored here until the 1990s. With the rise in container transport, however, the warehouse dwindled in significance and ultimately stood empty. 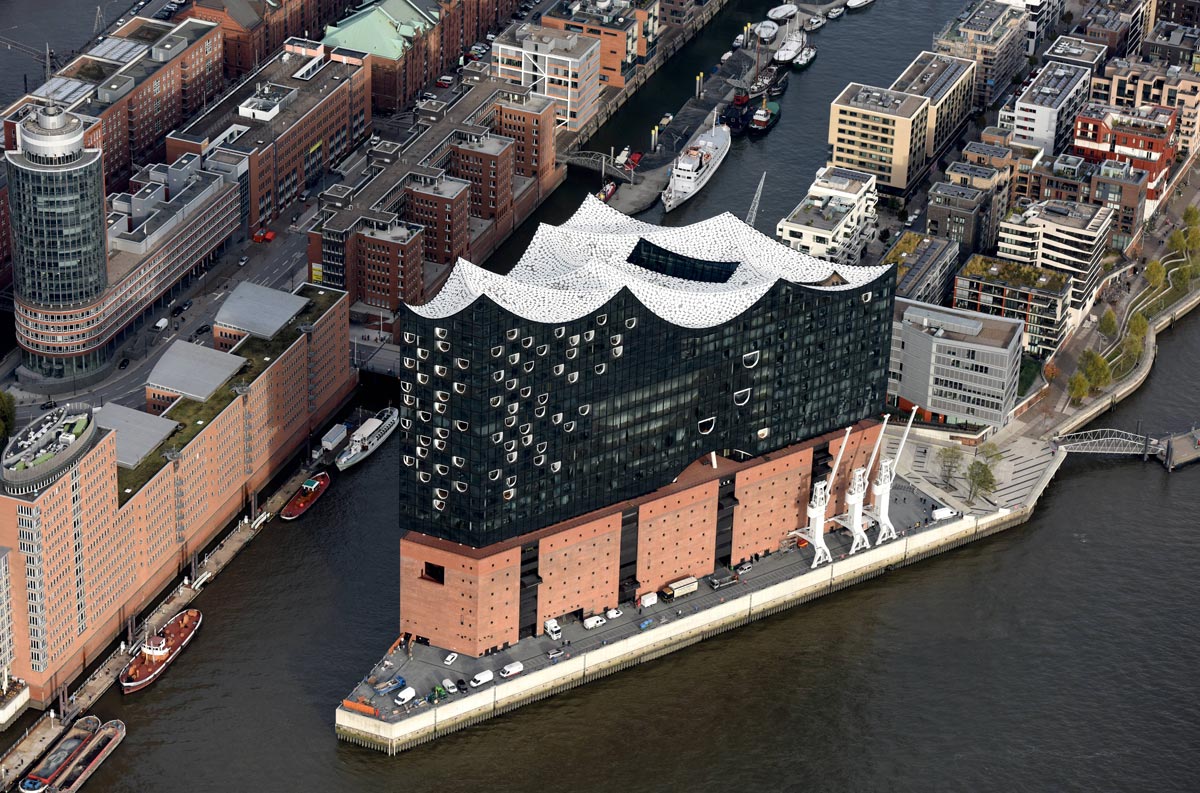 The Grand Hall, 50 metres from ground level and with 2,100 seats, is the heart of the Elbphilharmonie Hamburg. Following the concept of vineyard architecture the orchestra sits in the middle of the auditorium, with the rows of seats rising up in steep tiers. It is structural masterpiece: for soundproofing reasons the 12,500-tonne hall rests on 362 giant spring assemblies and is thus decoupled from the rest of the building. To ensure that the acoustics are perfect, a special material has been developed by internationally renowned acoustics specialist Yasuhisa Toyota. This is known as the White Skin. A four-manual organ with 65 stops, from the organ-workshop Klais in Bonn, completes the Grand Hall of the Elbphilharmonie Hamburg. In contrast to the Grand Hall, the Recital Hall follows the classic concept of the »shoebox«. With its flexible podium technology and seating for up to 550 visitors, it is suitable not only for chamber music, but also for numerous other uses. The Recital Hall is located in the glass corpus as well and, resting on 56 spring assemblies, is also acoustically decoupled. The third auditorium, the Kaistudio 1, for approx. 170 visitors, is in the interior of the Kaispeicher and is an ideal venue for contemporary and experimental music. 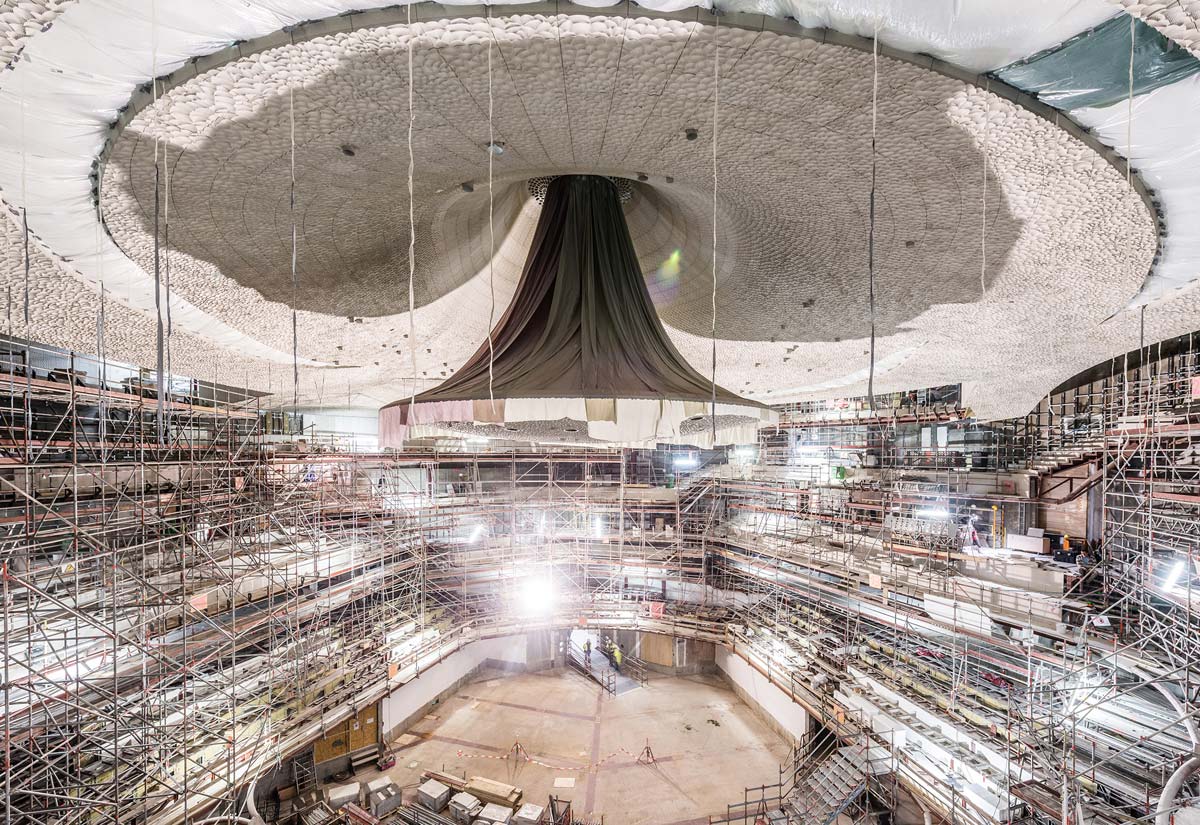 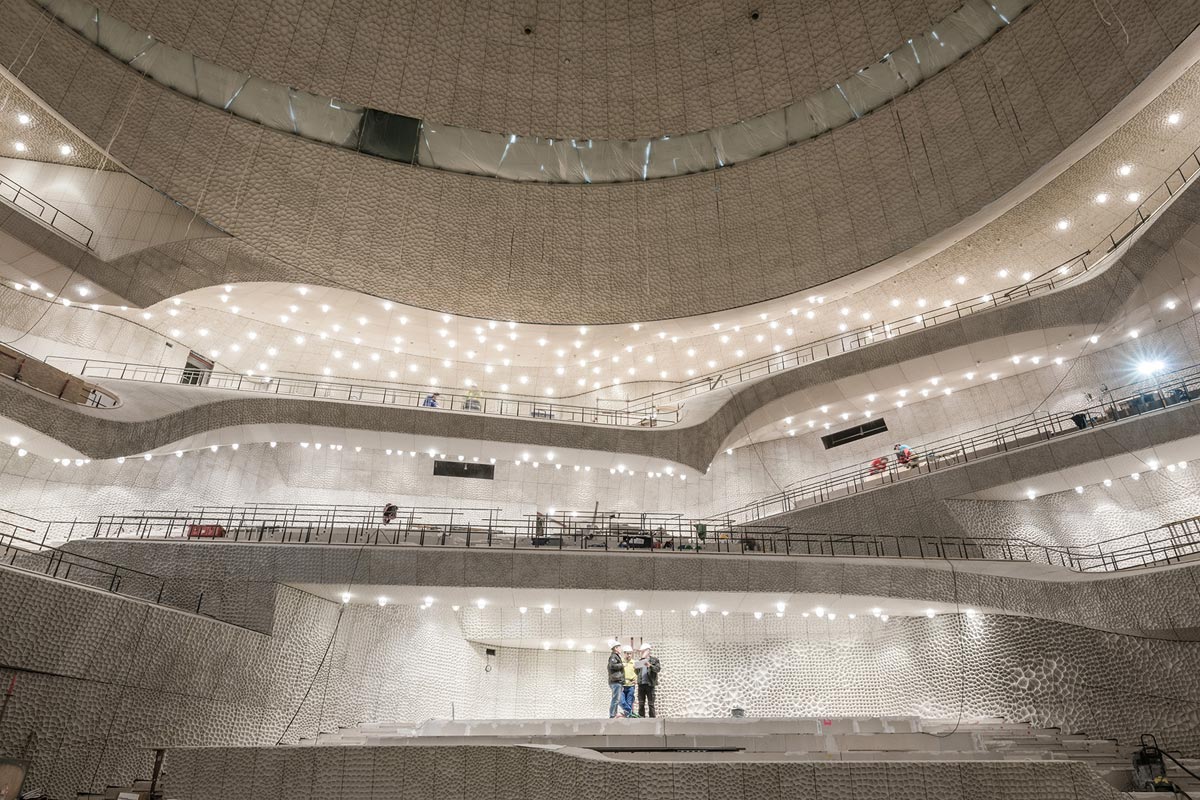 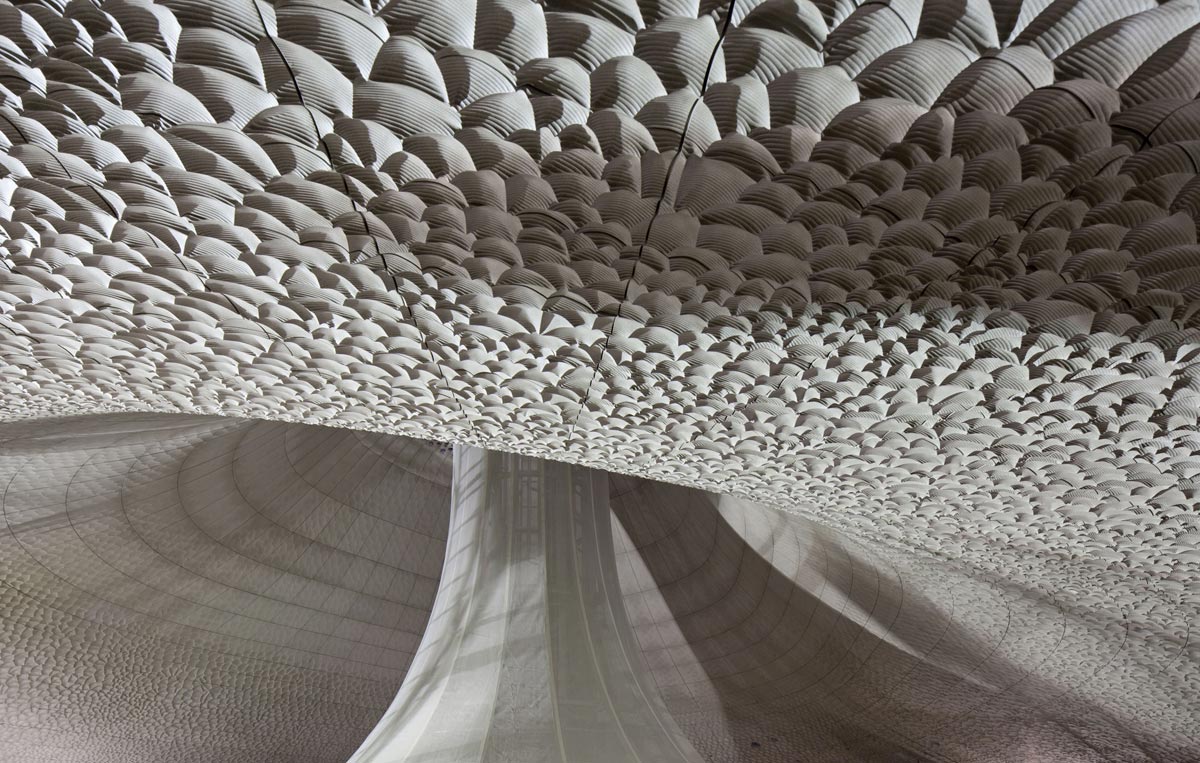 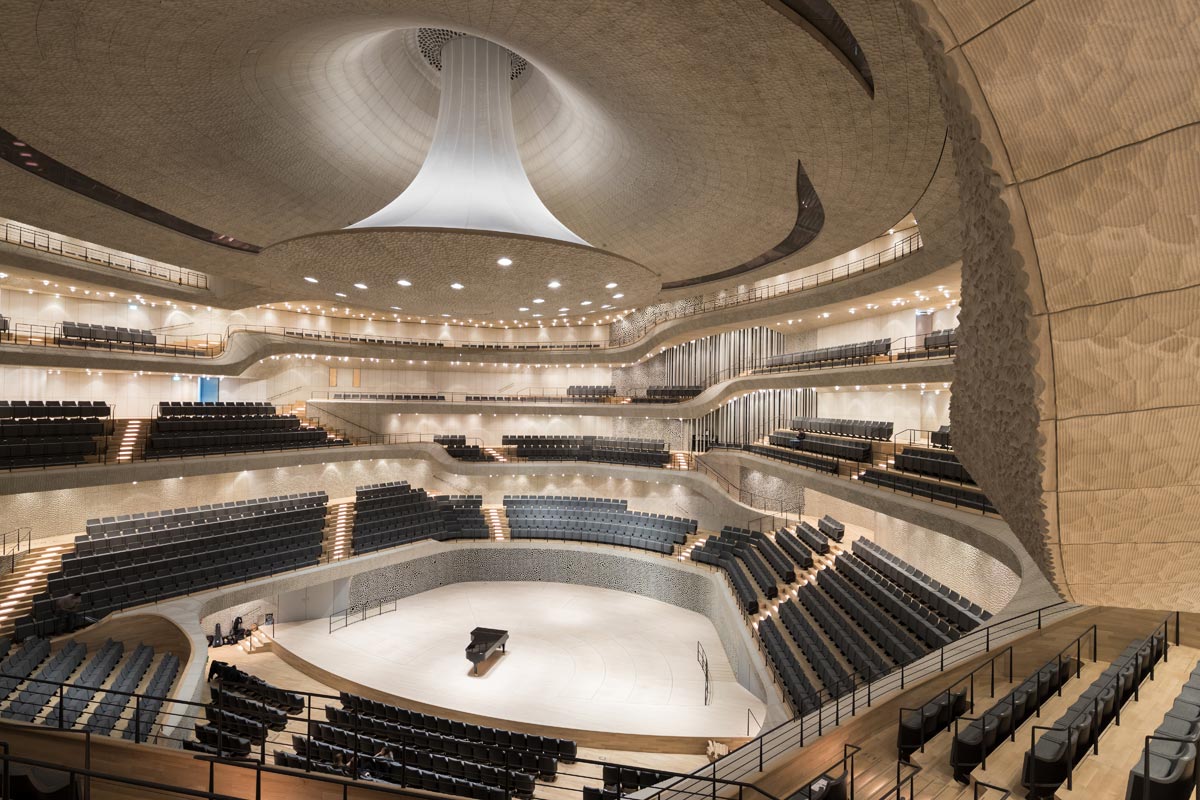 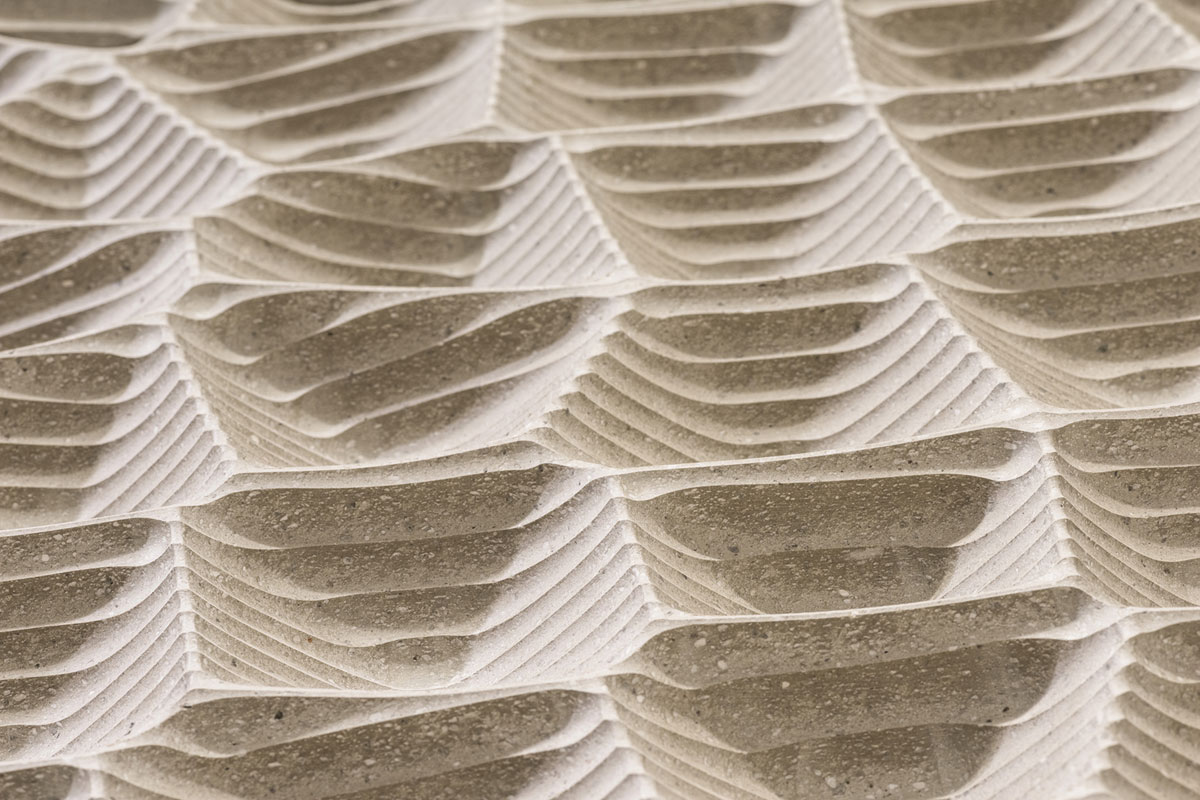 The White Skin ensures that the acoustics in the Grand Hall are perfect. It consists of a total of 10,000 gypsum fibre panels composed of a mixture of natural plaster and recycled paper. The panels are milled according to intricate 3D calculations und produced exactly to the millimetre dimensions given, to obtain an acoustically optimal surface structure. They fulfil the highest requirements regarding acoustic quality, weight, fire protection and durability. The panel surface, precisely shaped by a computer-operated device, maintains an organic, almost hand-carved look. The depth and shape of the surface structure differ according to the position of each panel and its corresponding acoustical needs. The surface structure was programmed especially for the Grand Hall and consists of approx. one million cells, each of which is perfectly matched to the spatial geometry of the hall. For optimal and targeted sound distribution, the surface structure plays a crucial role. Such highly effective acoustical microshaping is achieved by precise milling to the nearest millimetre and is characteristic for the White Skin. The panels weigh between 35 and 125 kilogrammes, depending on their thickness and size. The White Skin was developed by the architects, in close cooperation with the acoustician Yasuhisa Toyota, fire safety experts, and the manufacturing company Peuckert (based in Mehring near Munich). Prior to the production there was a thorough research of possible materials, and numeric and sample studies were conducted. By virtue of the precise planning, the walls and the ceiling merge into one another and appear like a single piece of skin the size of 6,500 square metres. 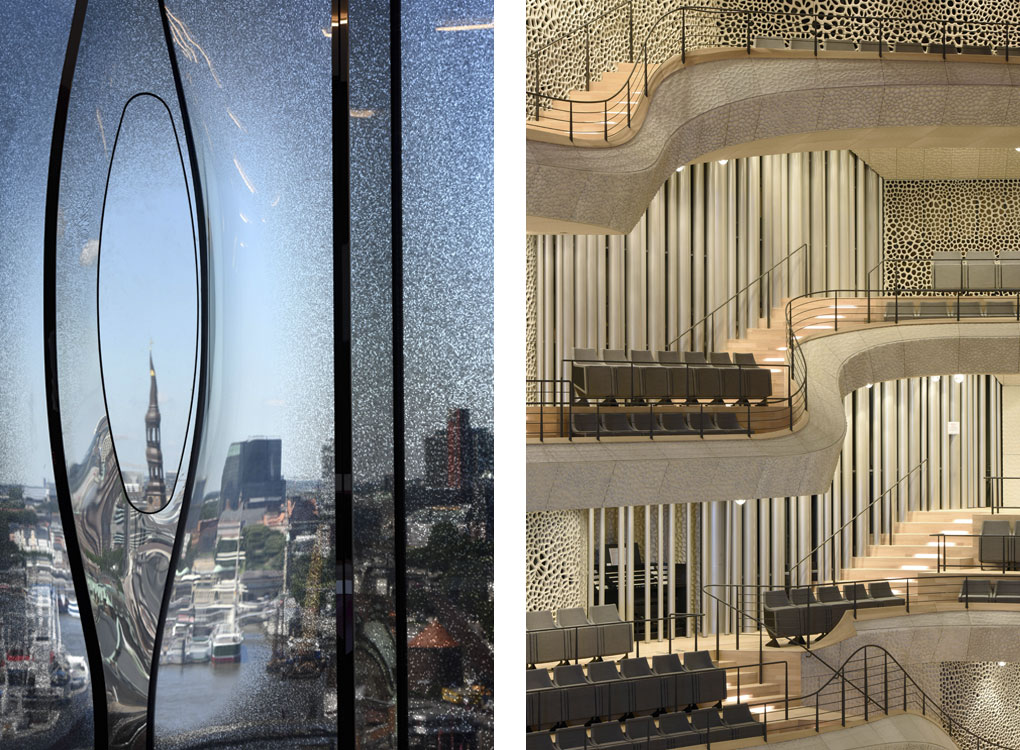 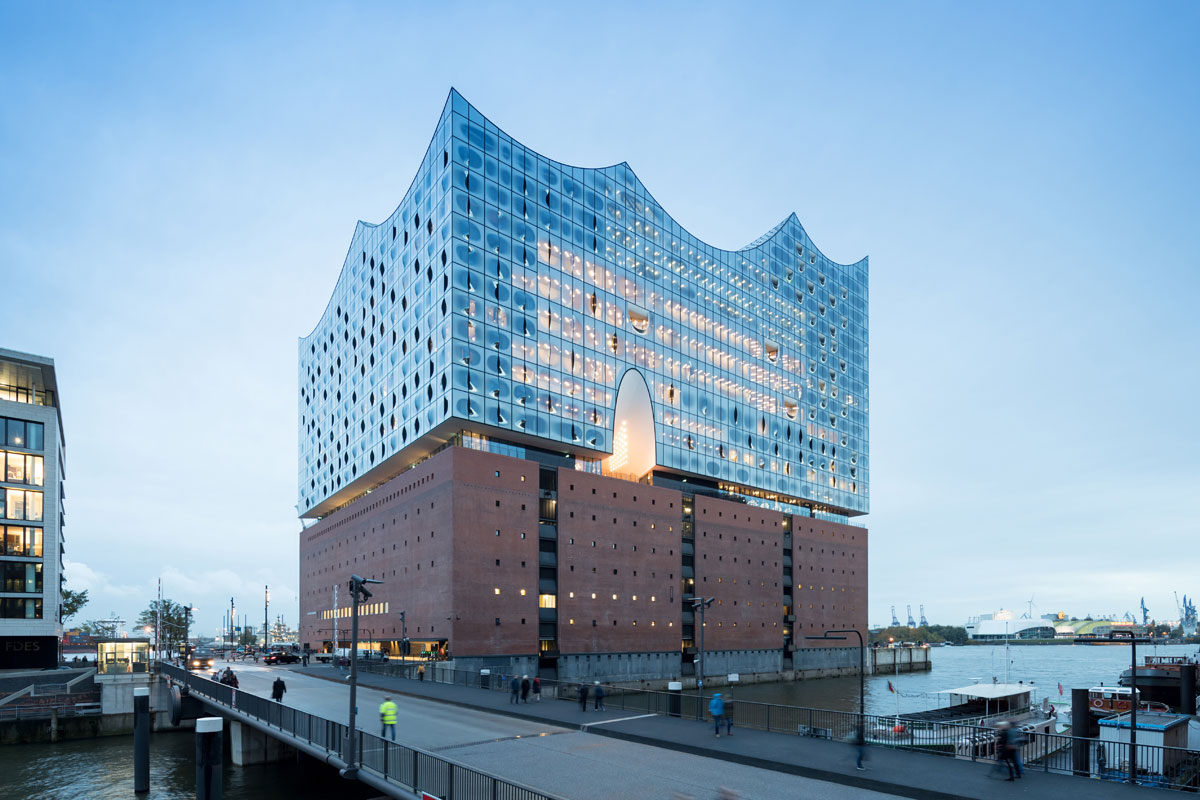 The dazzling glass facade of the Elbphilharmonie is unique. It consists of 1,100 individual panes, each measuring four to five metres wide and over three metres high. In the foyer area they are even more than five metres in height. The windows themselves are a masterpiece of engineering. Most glass panes were separately shaped with millimetre precision at 600° C, then marked with small basalt grey reflective dots. This prevents the structure from heating up due to sunlight while at the same time it creates a special shimmering effect. To achieve an optimal effect the configuration of the dots is computer-calculated for each glass pane based on the respective mounting positions. The curvature of each pane depends on the particular area of the building. Hatches resembling fish-gills characterise the hotel and foyer while horseshoe-shaped recesses, which look like tuning forks, form the balconies for the flats on the westernmost tip of the building. Each glass element weighs about 1.2 tonnes. In quality-control tests the glass panes withstood gale-force winds up to 150 km per hour and torrential downpours with ease. The glass surface of the Elbphilharmonie covers 16,000 square metres, a size equivalent to two football fields. It was completed in January 2014. 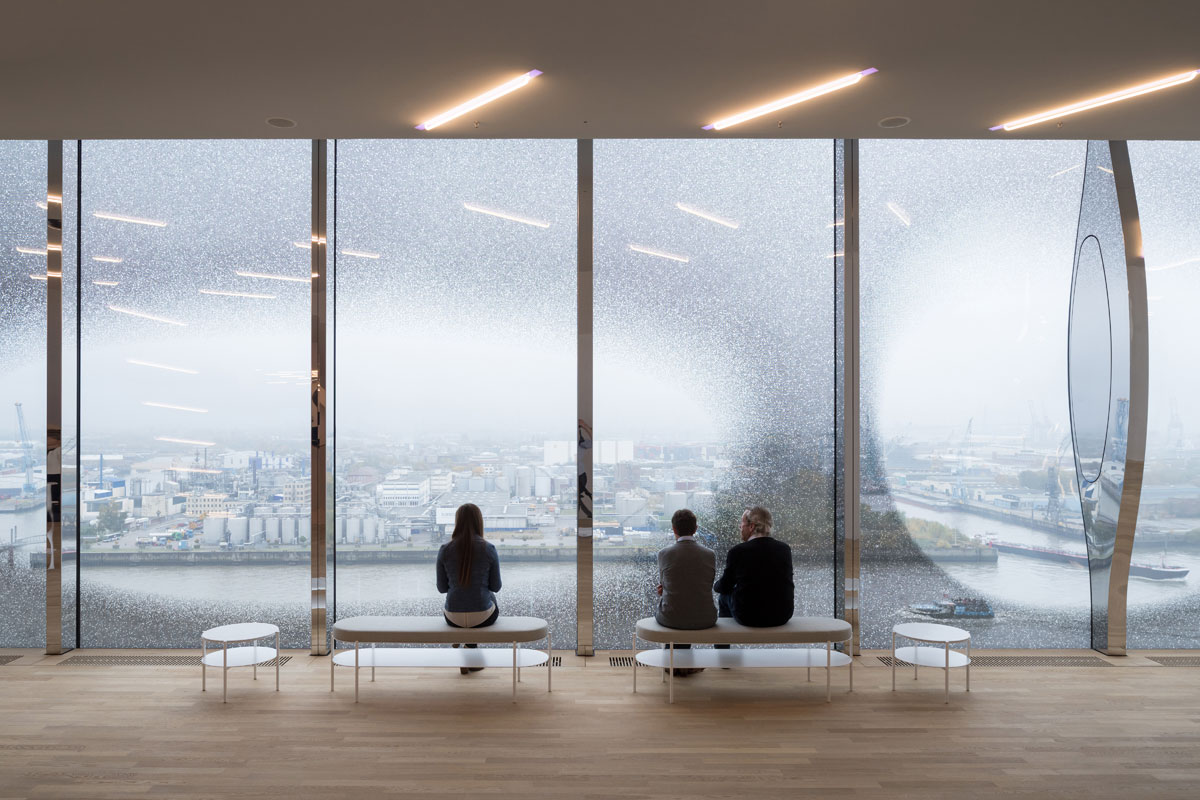 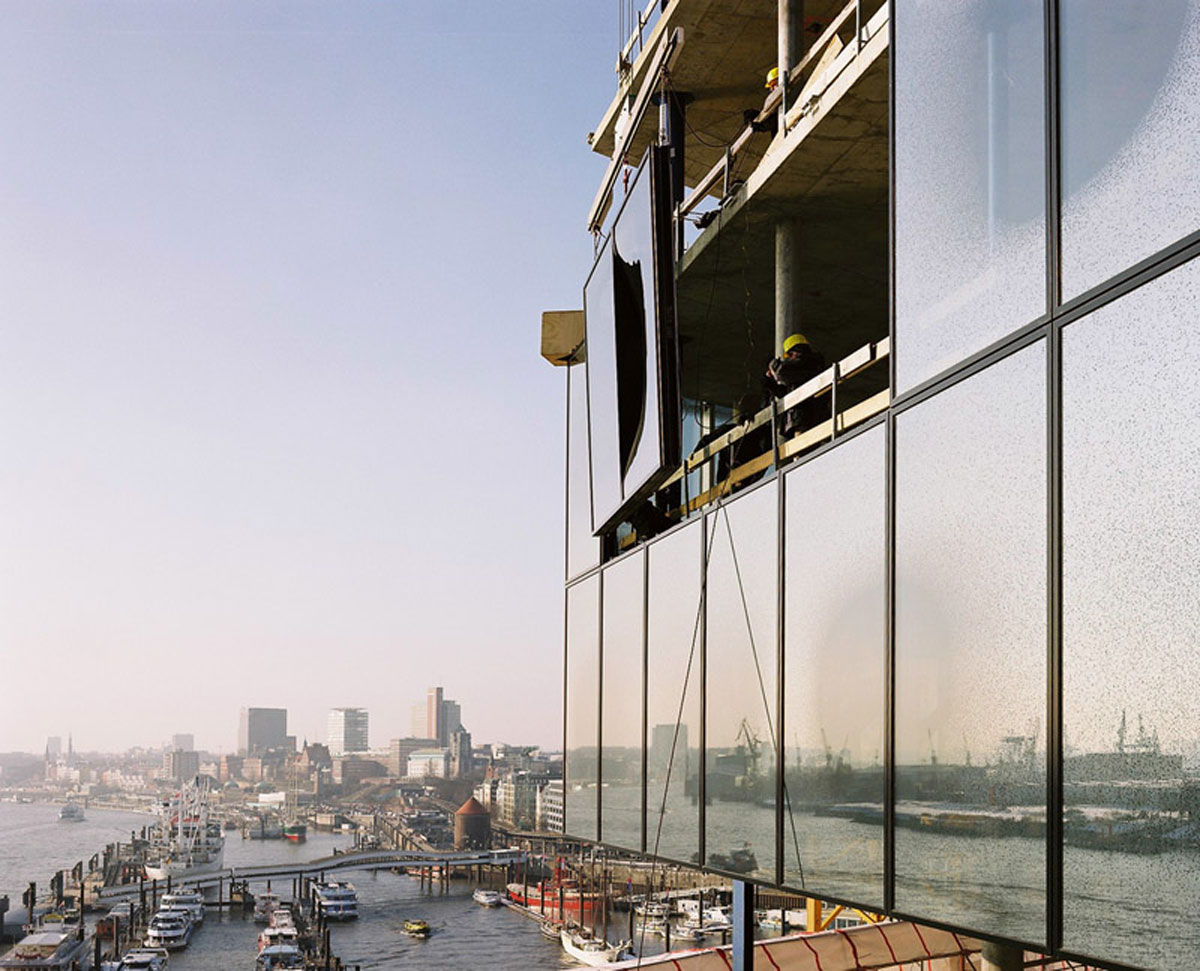 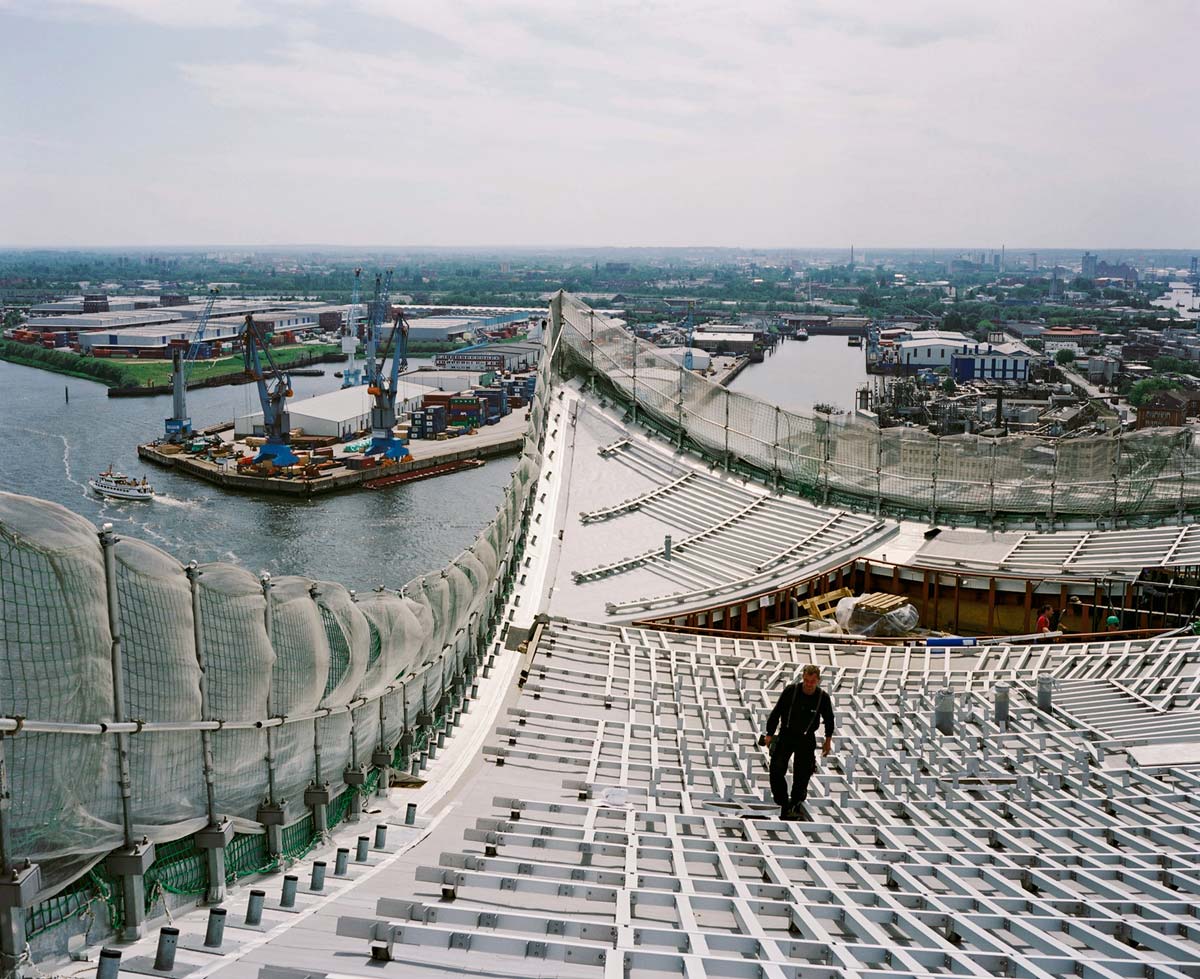 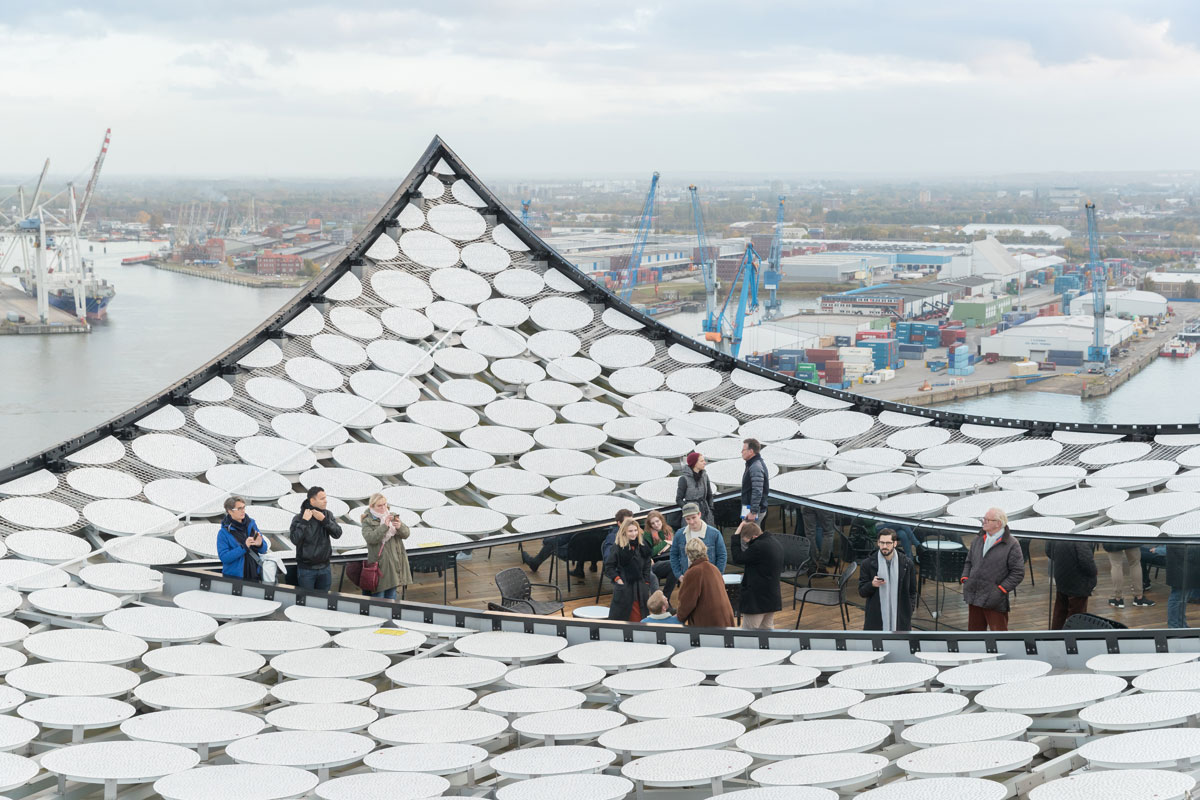 The 7,000-square metre roof of the Elbphilharmonie consists of eight spherical, concavely bent sections that form a uniquely elegant curving silhouette. In addition, 6,000 shimmering giant sequins have been applied to the roof. The roof structure, with its steep curves and high peaks, itself weighs 1,000 tonnes and covers the complex star-shaped steel framework that carries the Grand Hall without any supporting pillars. The roof of the Grand Hall is made up of a steel framework, each element measuring up to 25 metres in length and weighing up to 40 tonnes, the outer and inner shell, floors for the technical equipment, the White Skin with the reflector as well as additional loads. Altogether the roof weighs 8,000 tonnes. 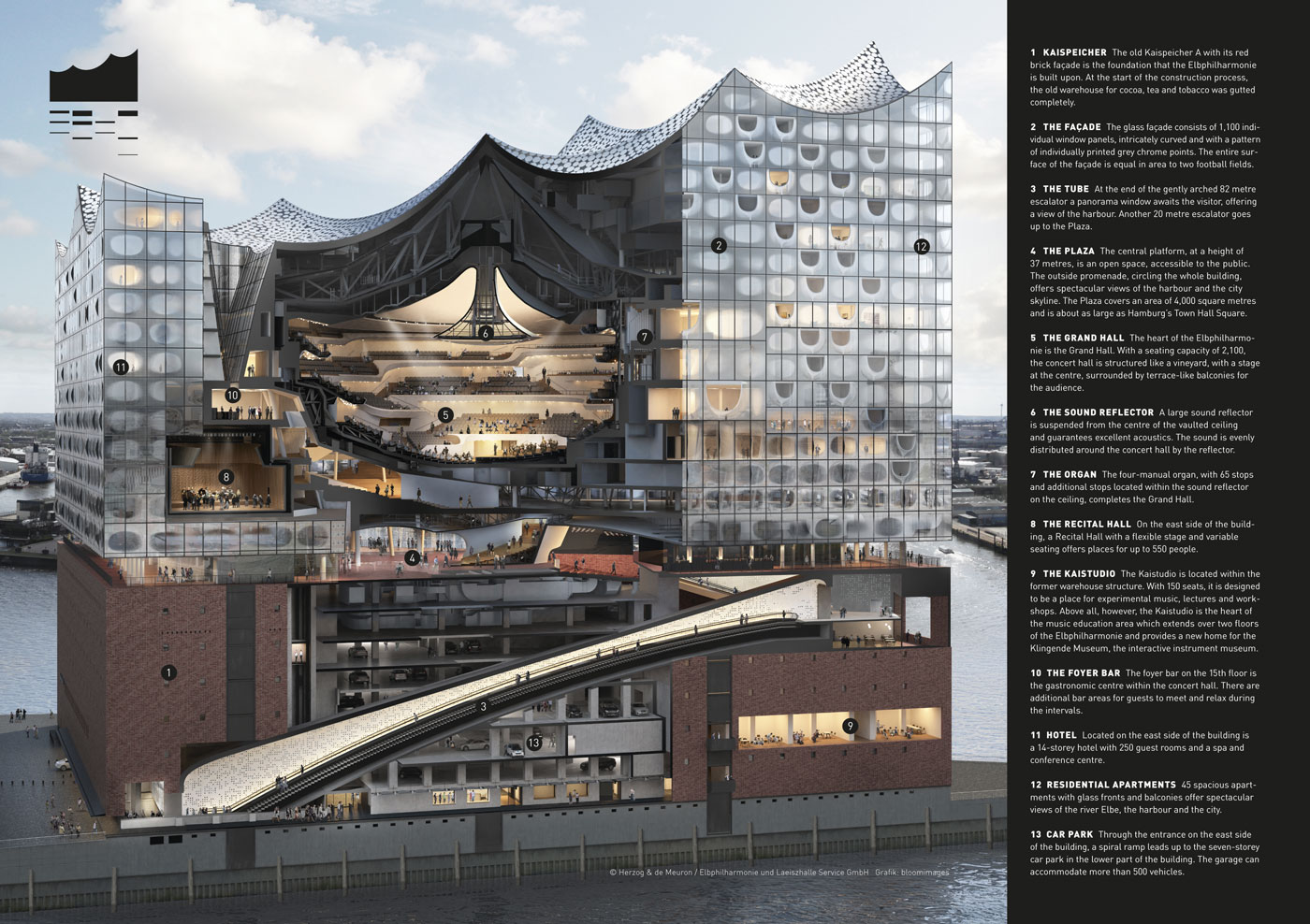 The initial idea for rejuvenating Kaispeicher A was of the construction of the MediaCityPort – an office building for the media industry, which was to tower up to a height of 90 metres on top of the Kaispeicher A, with a gross surface area of 50,000 square metres. However, the end of the dotcom boom and the subsequent drop in demand meant it was never actually built. Originally commissioned by the project developer Alexander Gérard, the star Swiss Architects Herzog & de Meuron came up with a project sketch – the groundbreaking idea of a »Hamburg Philharmonie« – the construction of a concert hall on the historical warehouse, surrounded by commercial facilities and a publicly accessible Plaza. The spectacular design elated the Senate, the city government and the public. In May 2004 the ReGe Hamburg, a project development company owned by the city, was installed as the developer of the Elbphilharmonie Hamburg. The feasibility of the project was assessed and a utilisation concept was prepared, and then the private partners for the construction, the financing and 20 years of operation of the object were determined by means of a European tendering procedure. The contracts were assigned to Commerz Real AG and Hochtief Solutions AG within the property company Adamanta GmbH & Co. The approx. 45 freehold apartments entailed by the project lie in the responsibility of Hochtief as the property developer, who in this specific field cooperates with Quantum AG in a company named Skyliving GmbH. 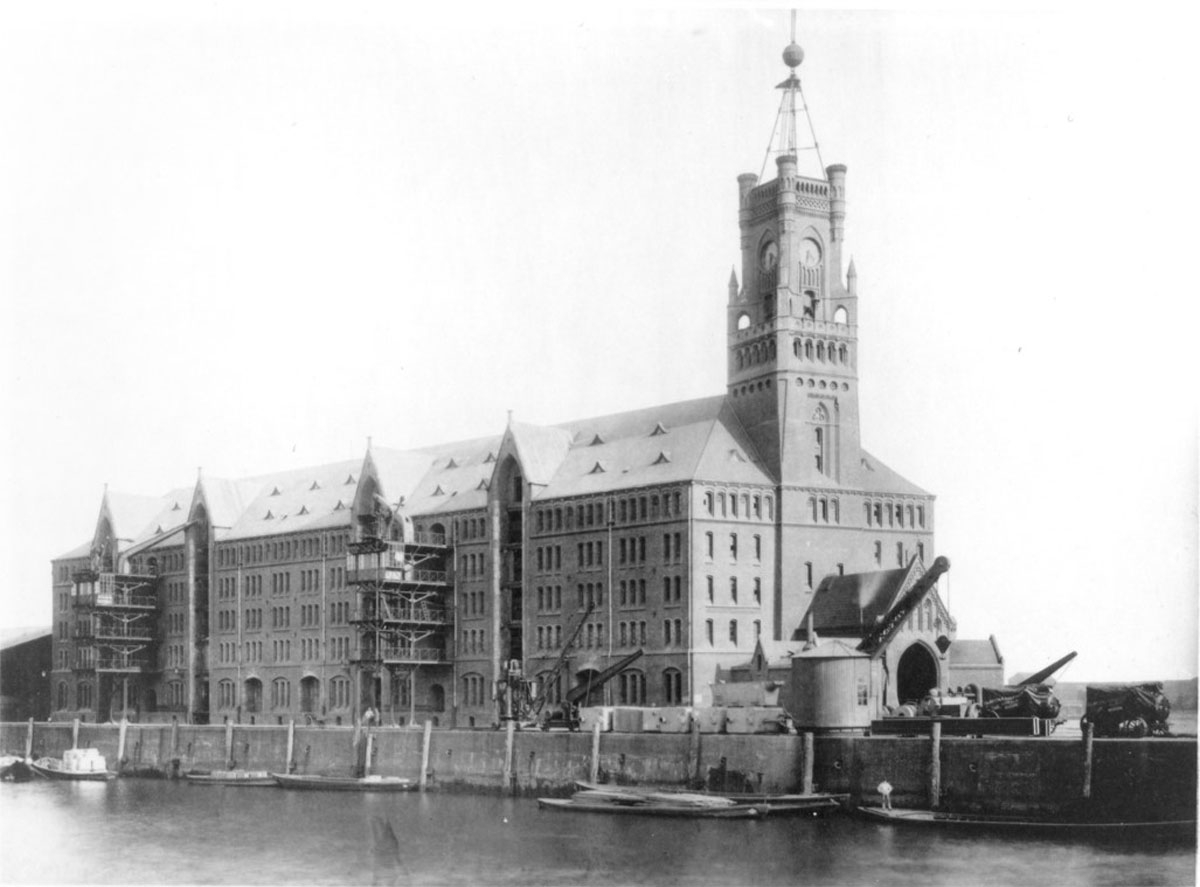 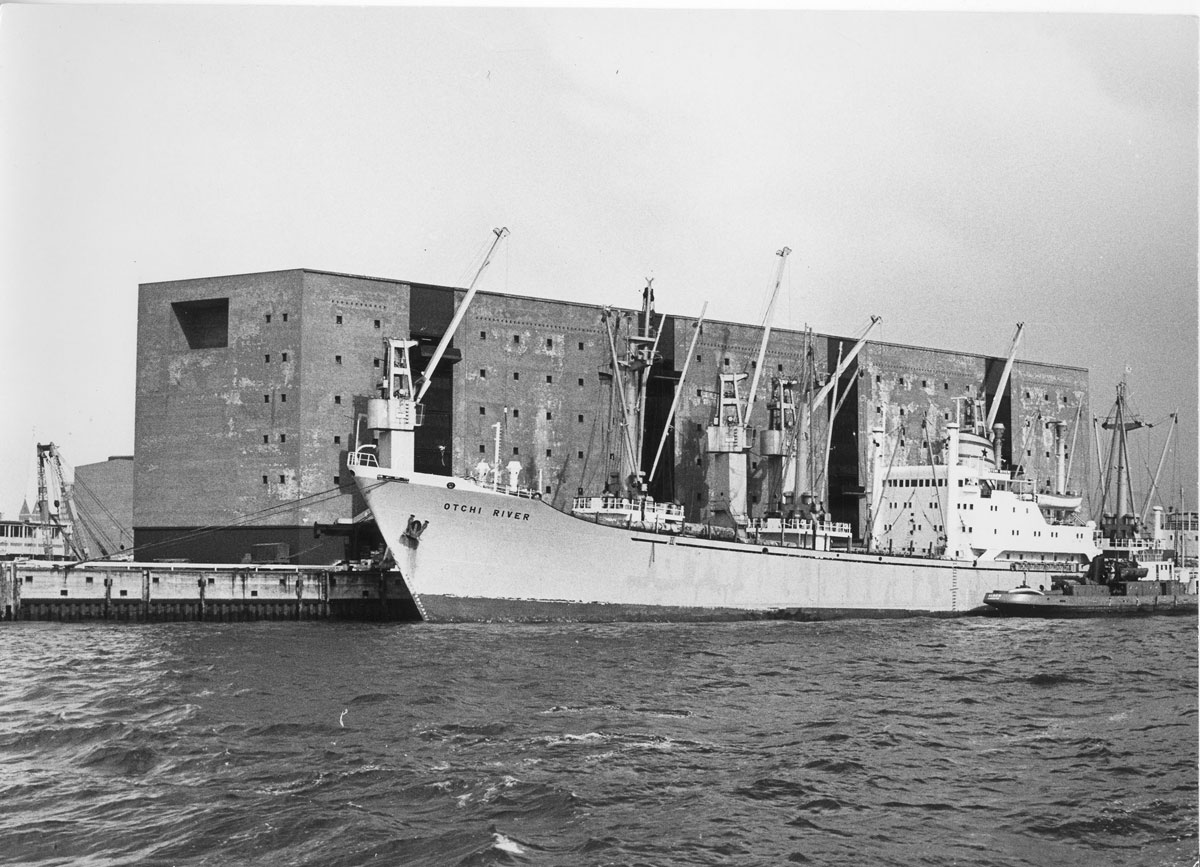 Following the unanimous approval of the city government, construction work began on 2 April 2007 with the laying of the foundation stone. The Kaispeicher A was first completely gutted, with just the brick facades remaining intact. Then a further 650 reinforced concrete piles, in addition to the existing 1,111, were rammed 15 metres deep into the mud of the River Elbe, so that the building could support the 200,000 tonnes of the Elbphilharmonie Hamburg. On completion of the 26th storey, the last one in the bare brickwork, the topping-out ceremony took place in May 2010. The shell construction was completed in November 2013. The installation of the White Skin in the Grand Hall was commenced in December 2013. The facade was completed in January 2014; the roof was sealed in August 2014. The Elbphilharmonie will be inaugurated on 11 January 2017, although the Plaza will already be publicly accessible from November 2016. 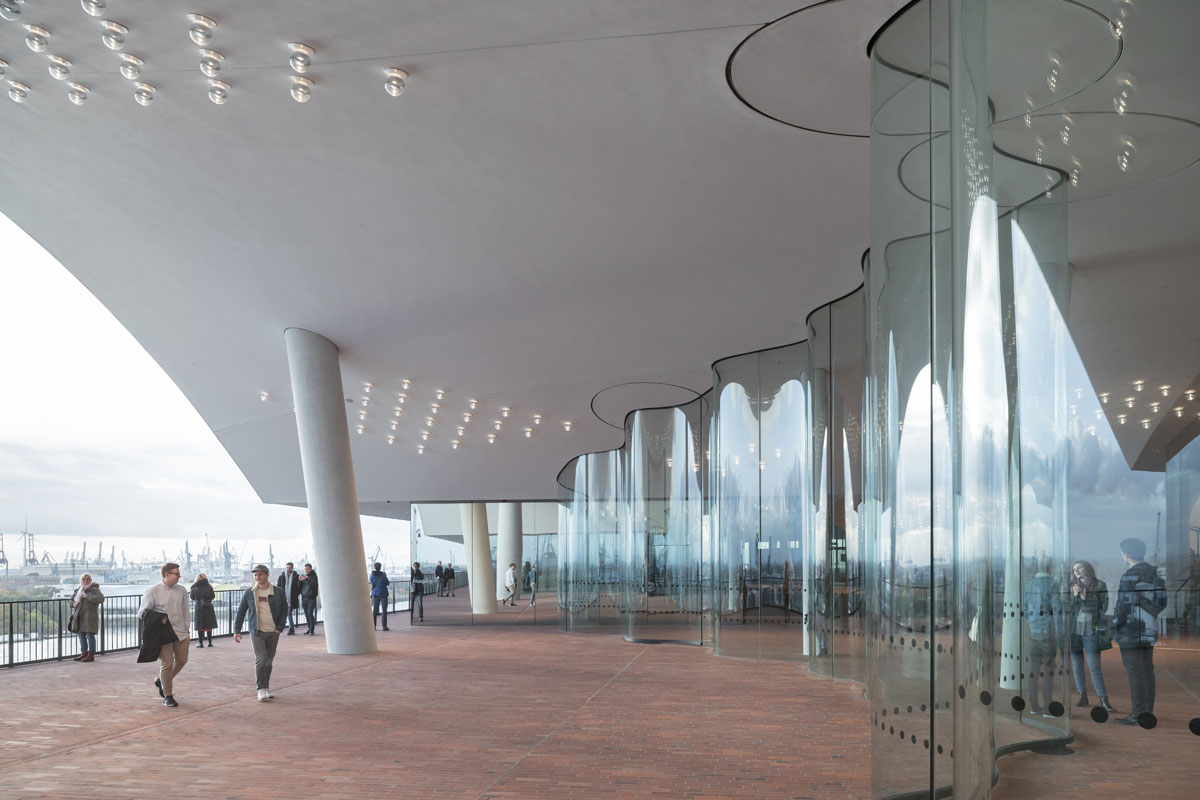 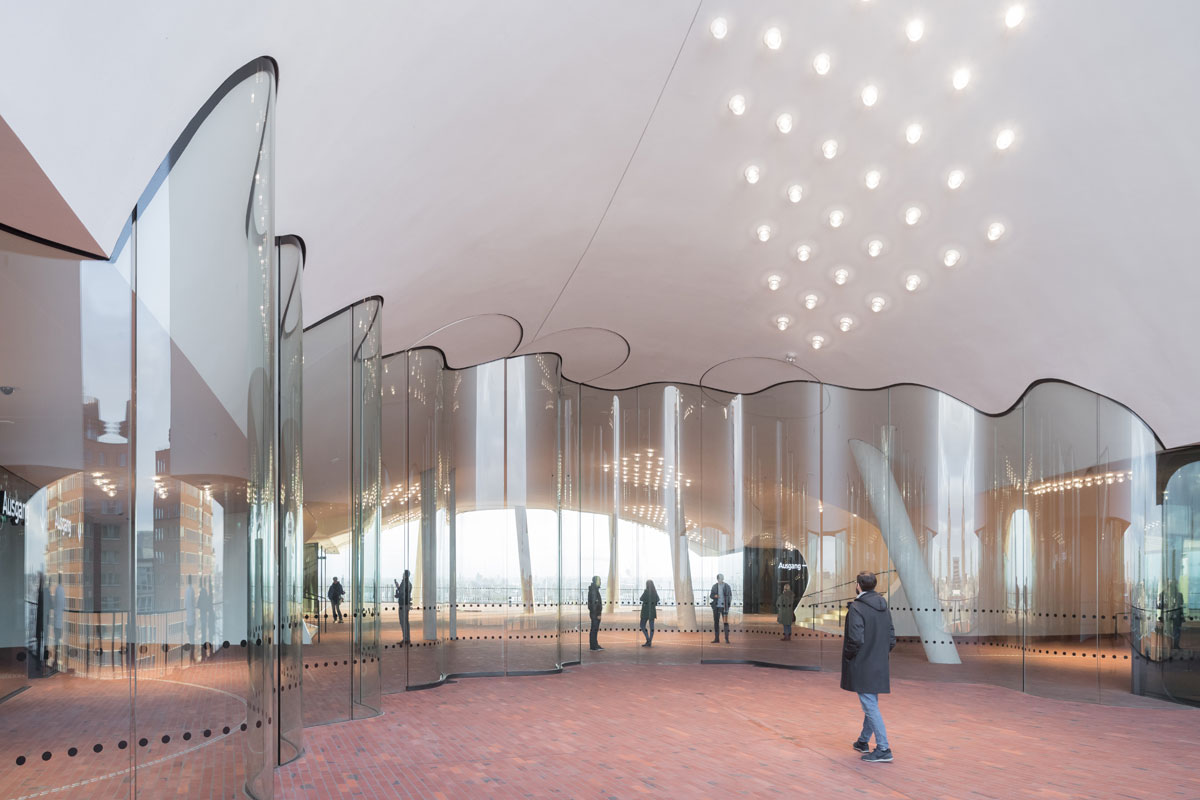 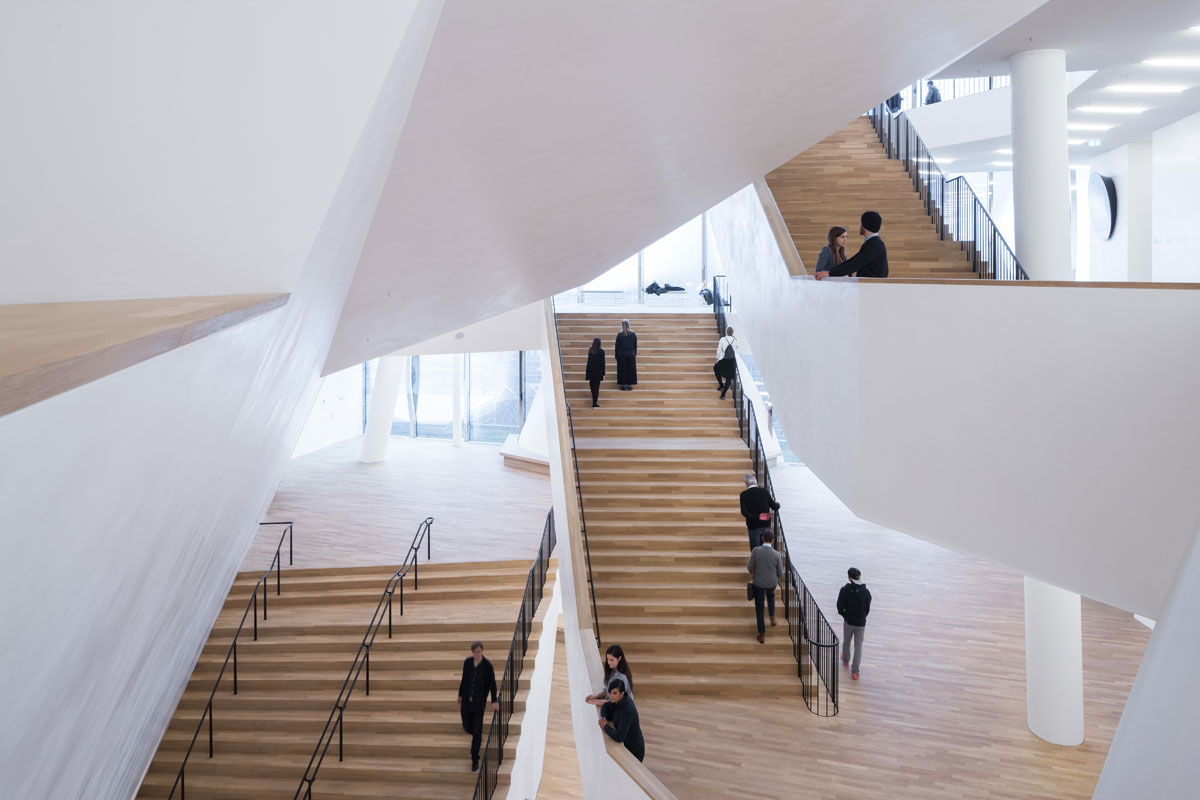 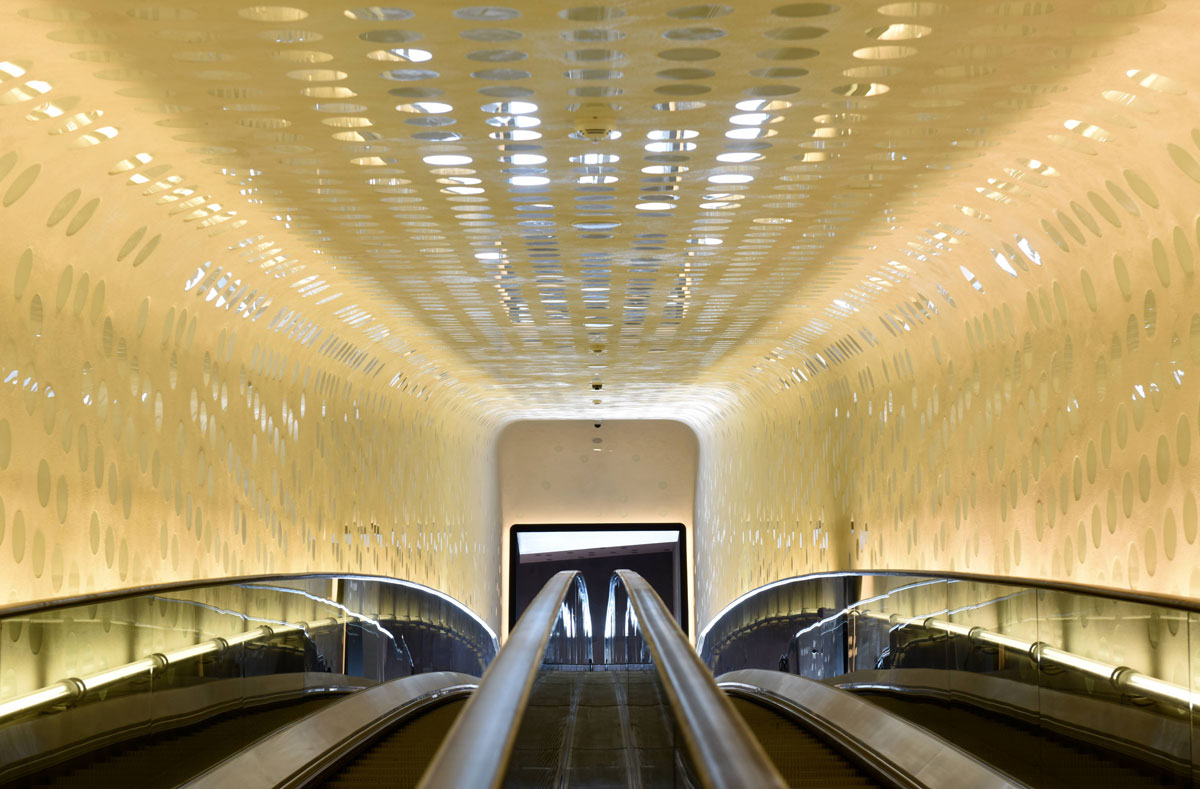 The building of the Elbphilharmonie Hamburg was accompanied by disputes between the municipal Elbphilharmonie Bau KG and the property development company Adamanta until summer 2013. Supplementary negotiations ended in November 2008 with a settlement (Amendment 4). At this time the costs of the project increased to 495 million Euro for the city and 30 November 2011 was agreed upon as the new completion date. In 2010 the Hamburg state parliament launched a parliamentary committee of inquiry in order to determine the causes of the increase in costs. At the beginning of 2010 Hochtief announced that it was not able to fulfil its contractual obligations. In March 2011 the general contractor predicted that the building could not be handed over until November 2013 and in October 2011 ceased construction work on the roof of the Grand Hall. In April 2013 the project partners signed an agreement for restructuring of the project, after which construction work was fully resumed. The restructuring agreement stipulates among other points:

– Additional responsibilities assigned to Hochtief (assumption of any risks related to planning and construction, participation in a newly founded consortium with the architects, guaranteed meeting of quality requirements from the architects and the acoustician Yasuhisa Toyota, contractually warranted intermediate deadlines, as well as a binding date of completion)

– Additional costs for the City of Hamburg (256.65 million Euro for the additional services executed by Hochtief and the architects). 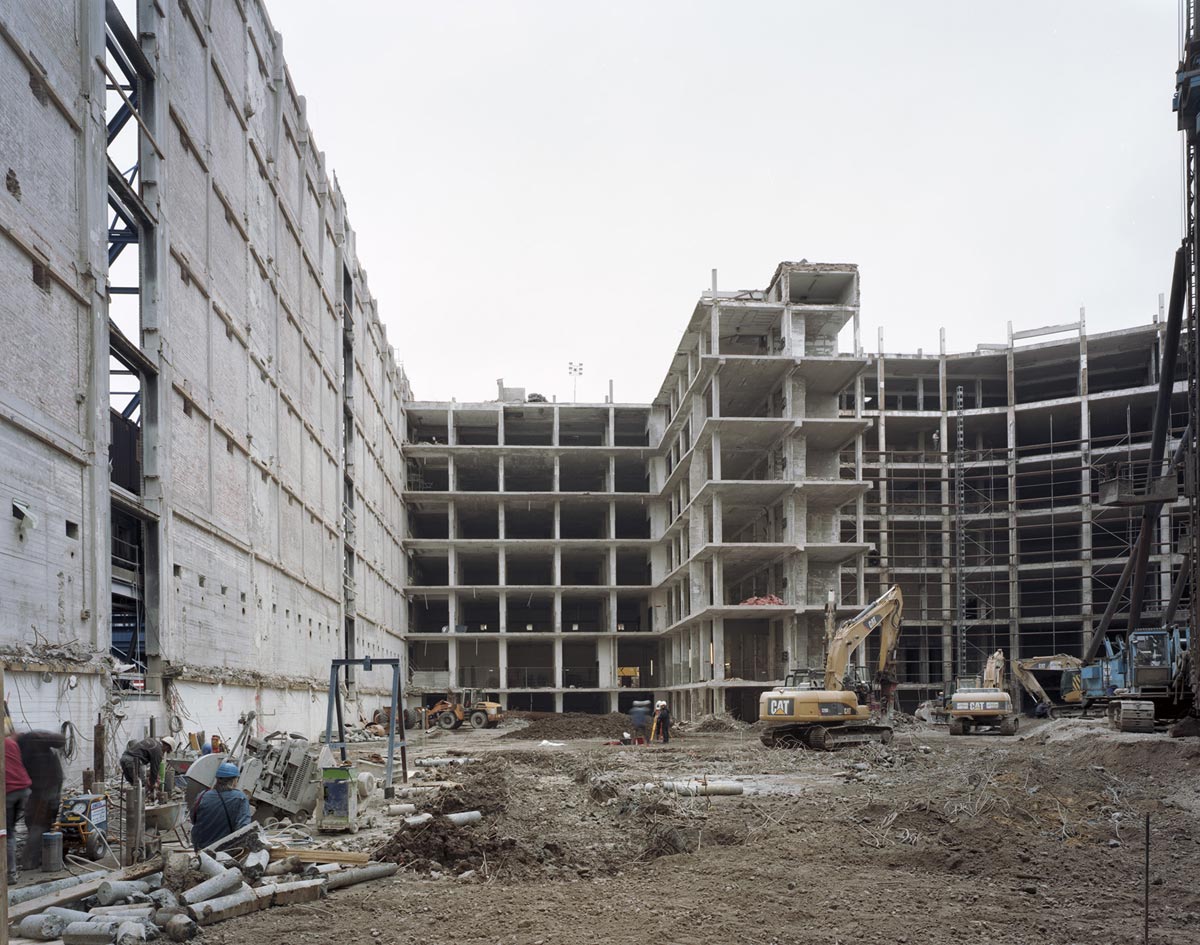 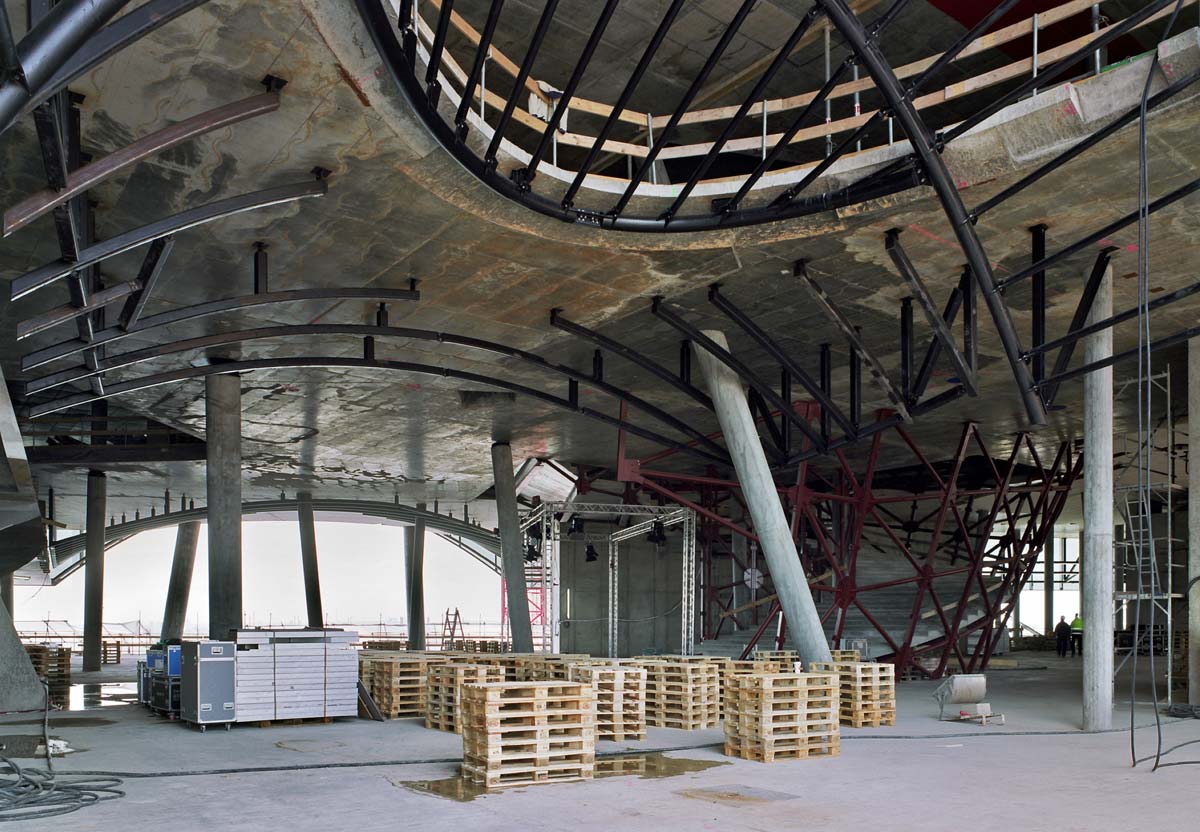 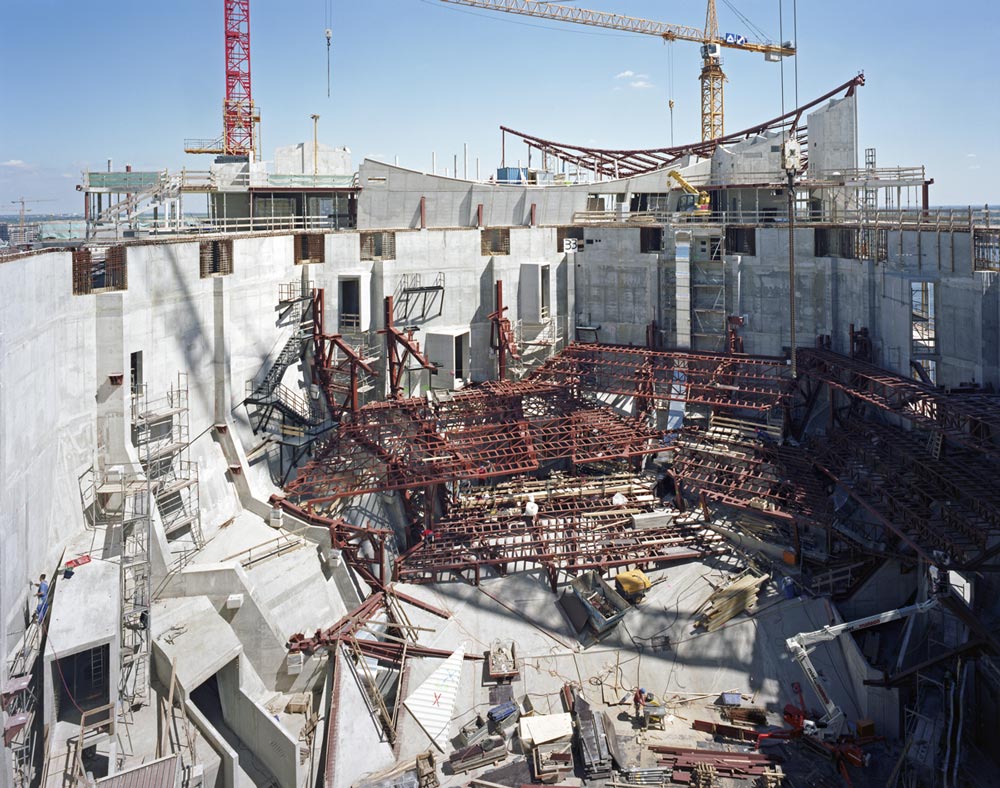