The architectural teams of META, advvt, NOA and OFFICE, working in collaboration with Project², present a building block that possesses an indirect but recognizable uniformity, yet does not forsake its own strong identity. KAAI 37 is the first passive group housing project to be certified by Pixii.

META, architecten de vylder vinck taillieu, noAarchitecten and OFFICE Kersten Geers David Van Severen have each designed a building for the KAAI 37 block in the Cadix district of Het Eilandje in Antwerp. Together with Project², the four offices won the design competition formulated for the block by AG Vespa.

The complex consists of 4 buildings with a total surface area of ​​8,500 m² that group 72 apartments and duplex apartments, 5 houses and 4 commercial units around a courtyard. 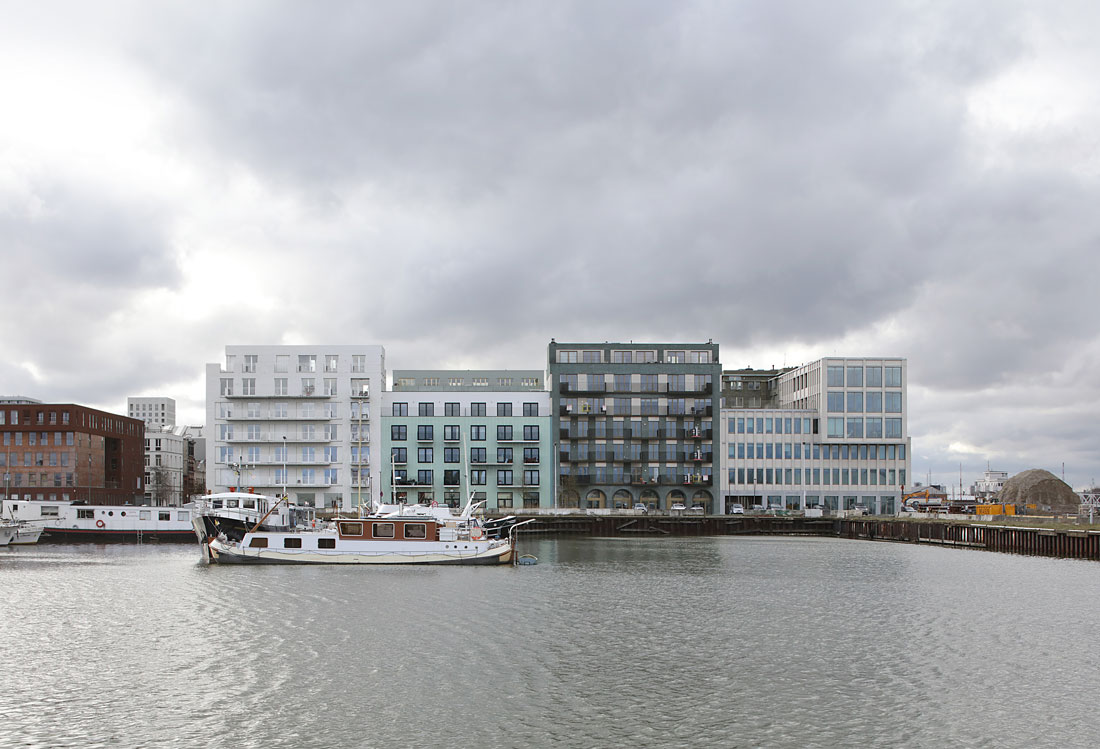 The context, position and visibility of the ensemble required a specific approach to the materiality of the façade. The underlying grid, which is tailored to the warehouses in the district, creates an indirect uniformity. Mineral materials with subtle colour nuances enhance the idea of ​​the ensemble. For example, the glass façade cladding, prefabricated concrete elements and glazed tiles were all elaborated in shades of green. This colour was even extended to the masonry work on the façade. 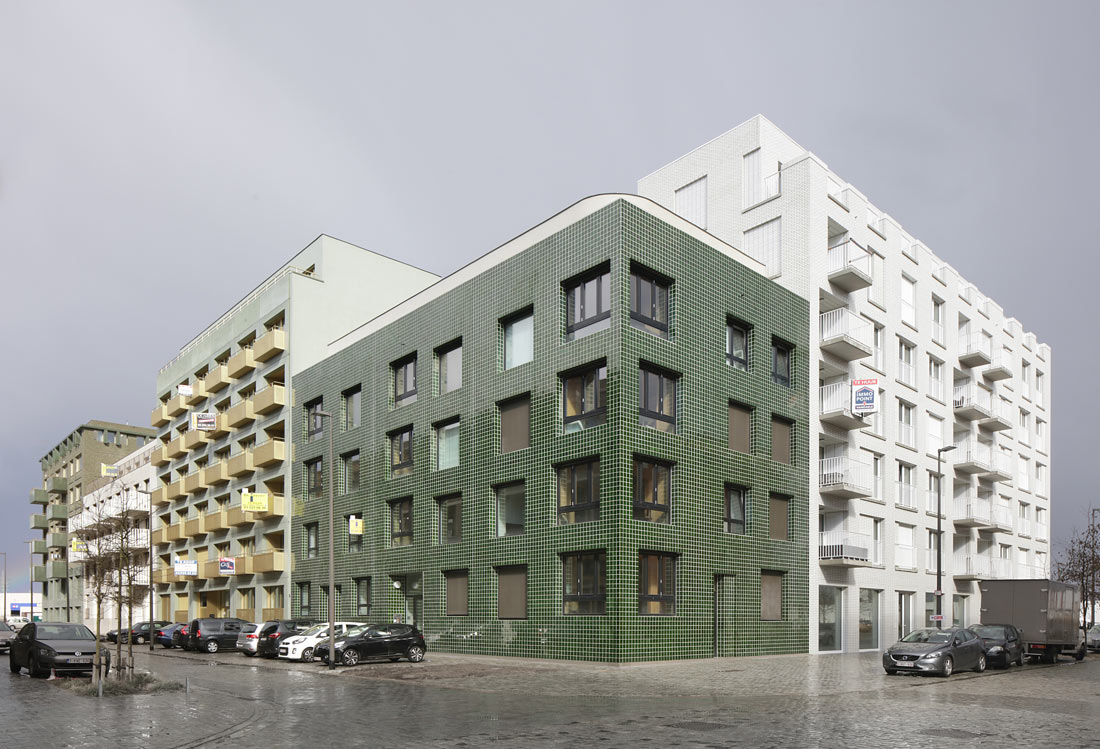 KAAI 37 is the first passive group housing project to be certified by Pixii (formerly the Passiefhuis-Platform). Not only were the energy requirements of the building taken into account, but also the correlation between its needs and the supply of energy from renewable sources. This analysis occurred at all levels, ranging from the individual home to the building as a whole, and extending to the wider neighbourhood. 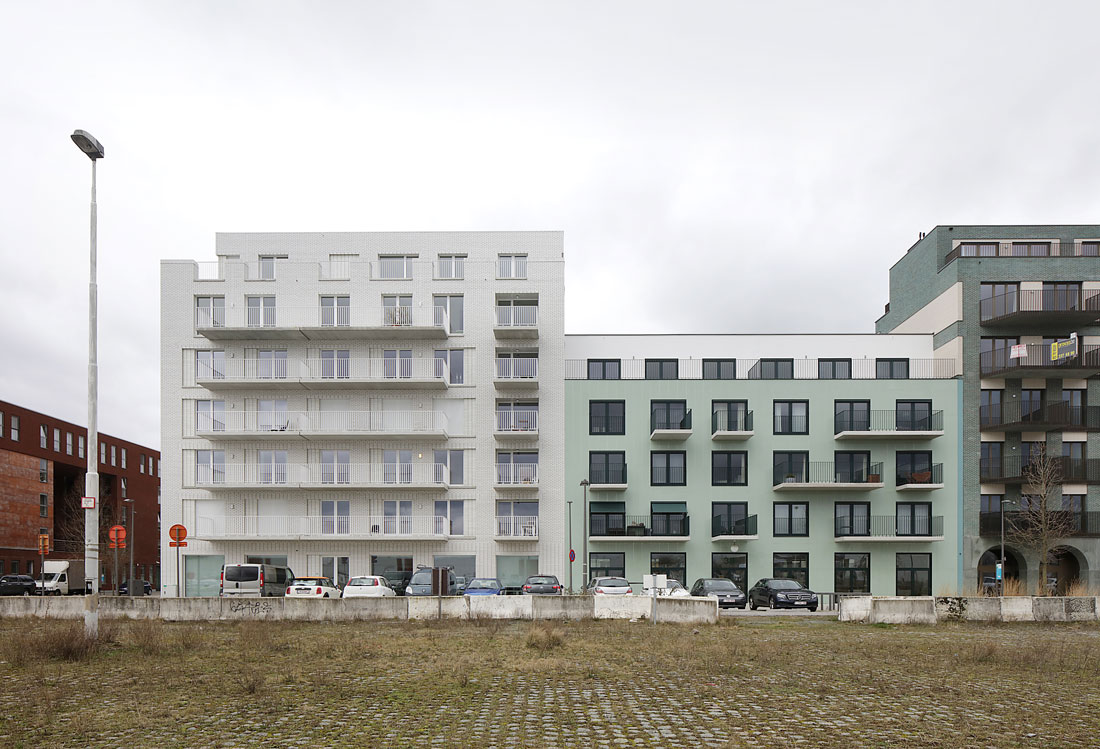 Great attention was paid to the integration of terraces and balconies. The exteriors of the buildings have a refined and static appearance. On the inside, the emphasis was placed upon the creation of a pleasurable plant-filled courtyard. This was carefully divided into private and communal outdoor areas. 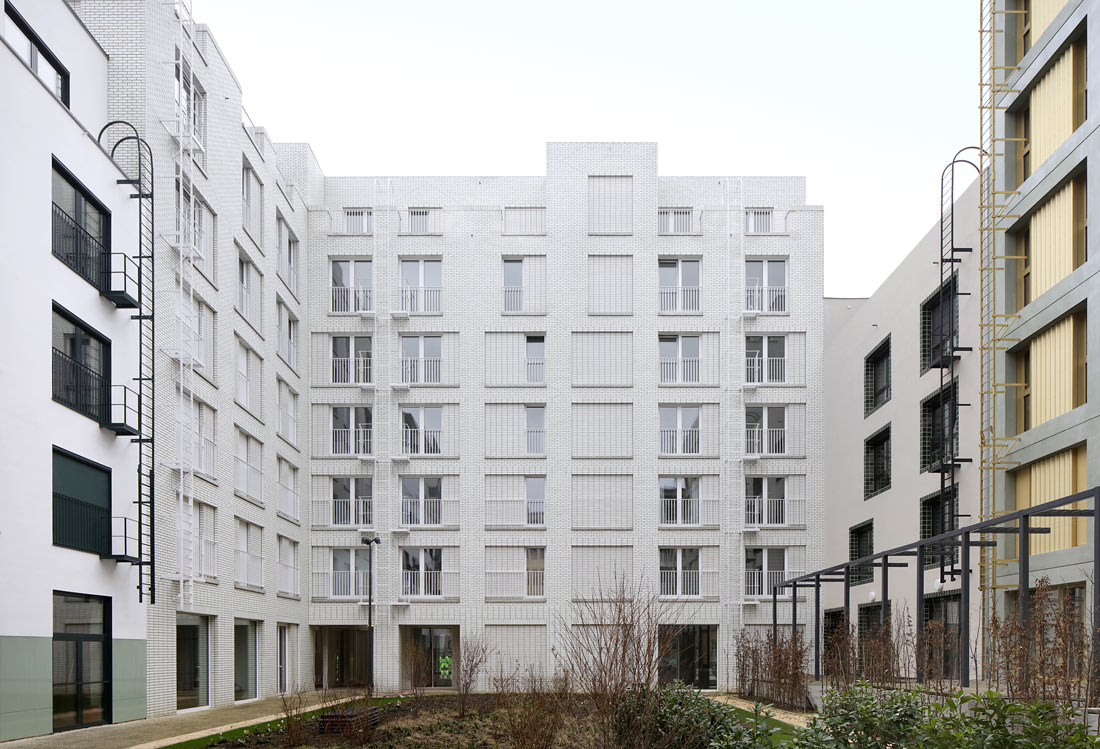 The project is the result of an intensive collaboration between the four offices. A series of common principles was established and honoured, including the decision to use a glazed or reflective finish for the exterior and an agreement about how the façade grid would be organised. Moreover, the team consulted the designers of the north building block and agreed that West 8 could design the entire courtyard. 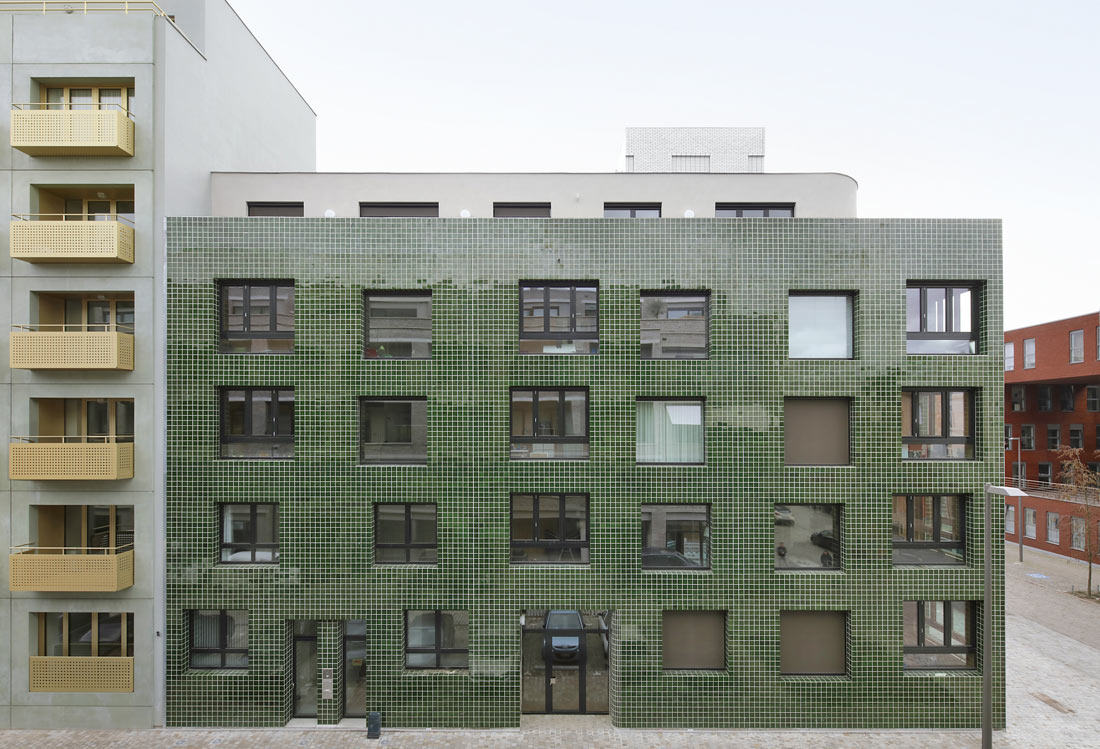 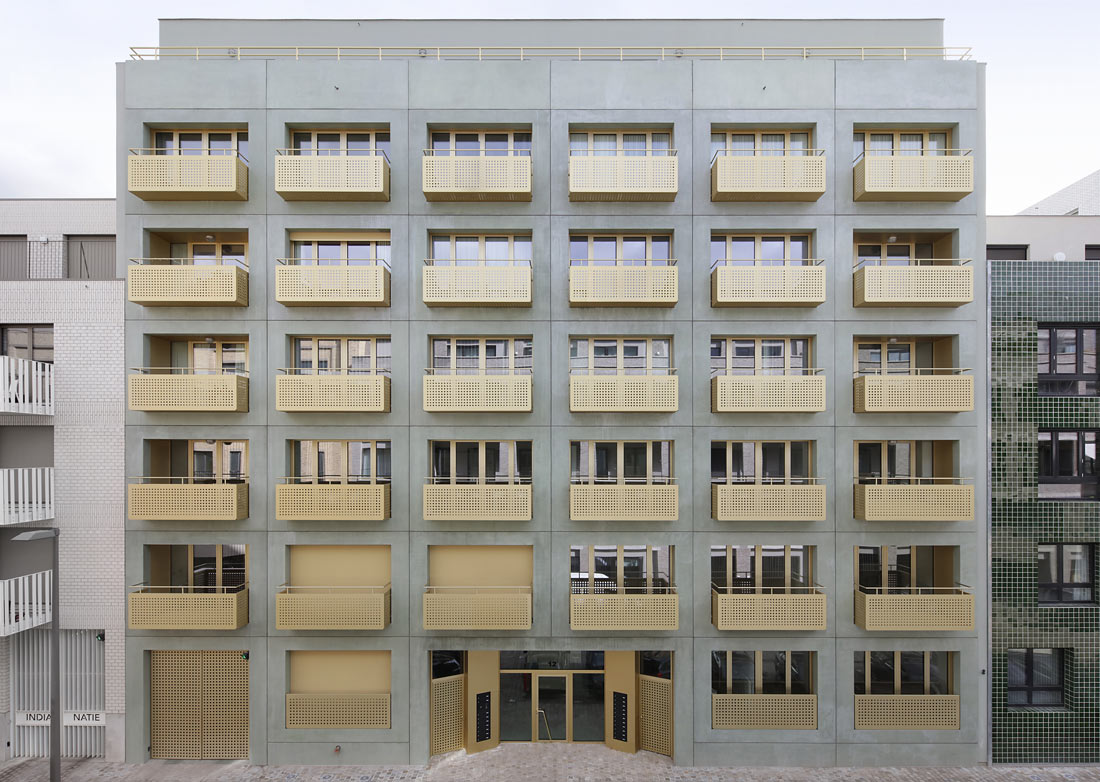 Unique in the Port District

With its rectangular street pattern and exceptional location on the peninsula, the former harbour district is a unique site within Antwerp’s urban fabric. With KAAI 37, the historic evolution of the building block pattern within Het Eilandje is completed and the street pattern is extended right up to the quayside. The public space has also been completely renewed.

Sunny appartments, a game of light

A façade in white stone. Sometimes matte. At other times glossy. And green grouting. Fresh. But at the same time, like a drawing. And not just because of the coloured joins, but also because of the lintels. If the façade is a dressing, then the lintels are a stack of bricks.

A tight matrix of windows. Then full windows again. And then windows with a semi-blind niche. The tight matrix continues until the last building layer, which has a deeper recess. Yet still the matrix continues. In the incline of the parapet. And in the half windows on the façade.

Sunny apartments ensure that day-to-day life is shaped by the city and the courtyard. The sun does not just play across the façade, with its glossy and matte surfaces. It also plays through space. From front to back. 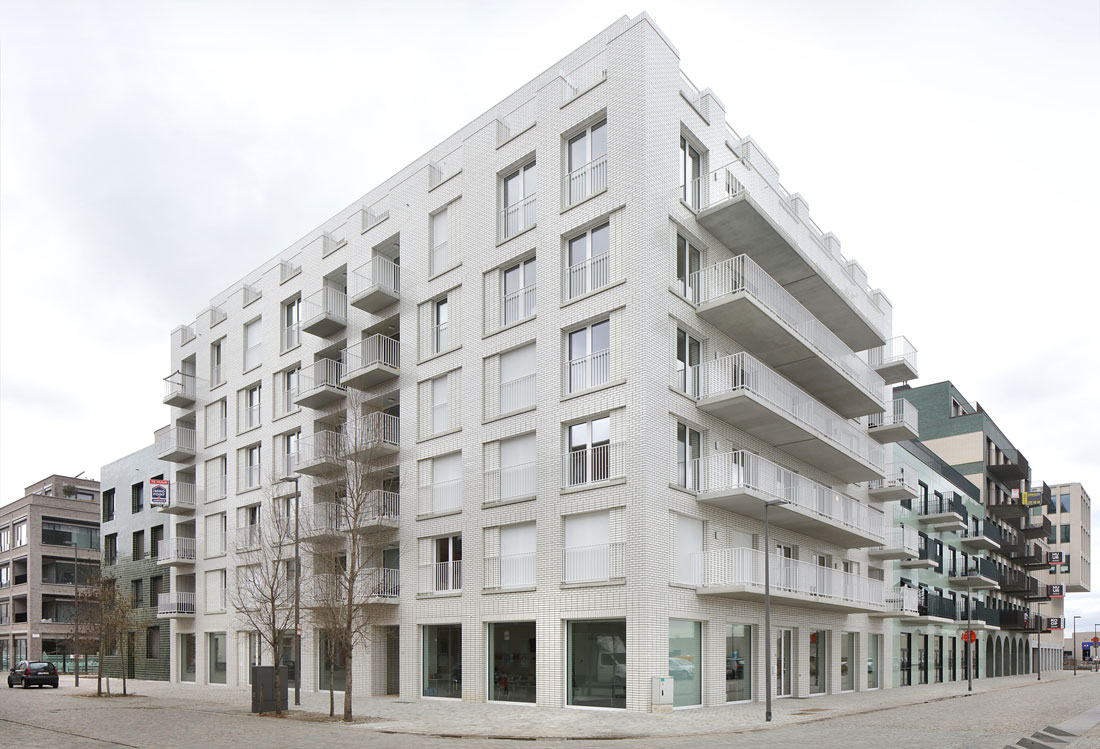 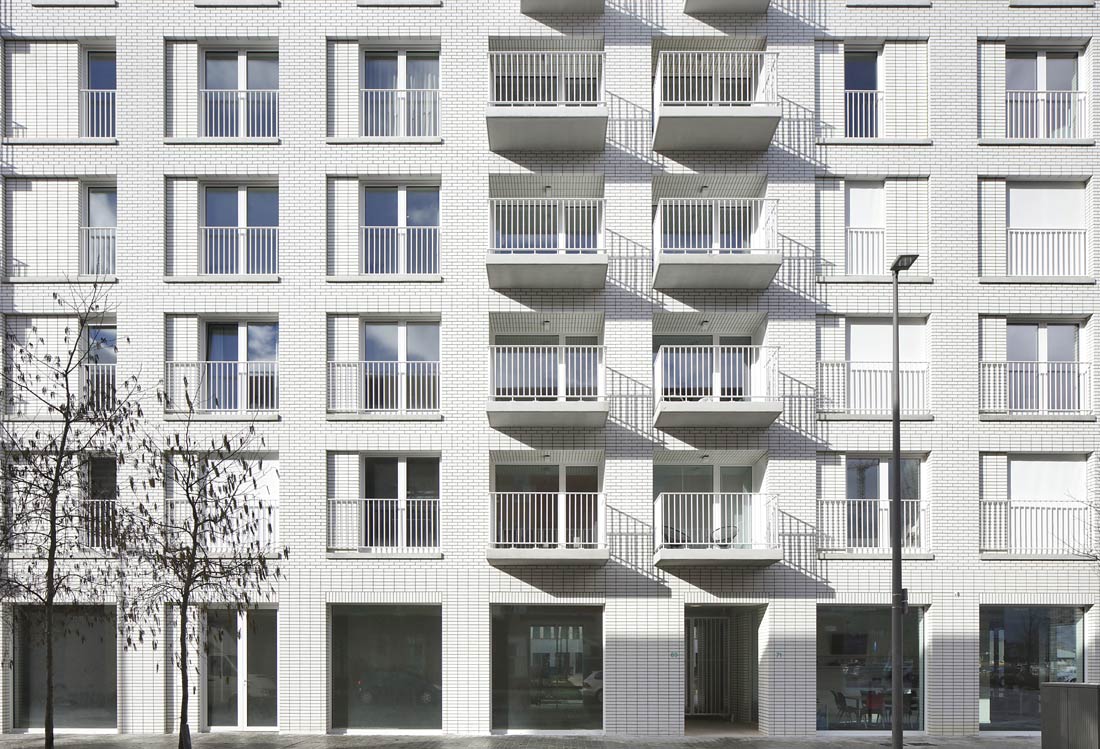 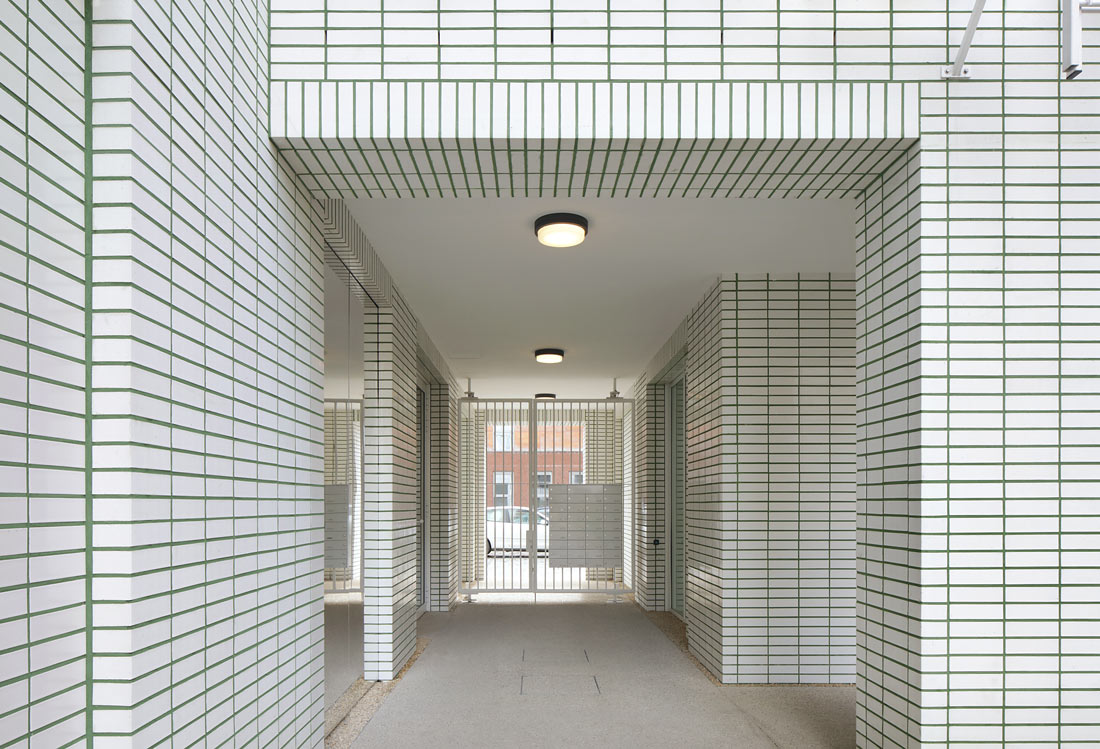