The Zollhallen Plaza in Freiburg, Germany is a new, dynamic urban counterpart for the conservation-listed customs hall which was restored in 2009. The plaza has been transformed from a freight train terminal, and then a wasteland, into an integrated multifunctional social resource for the local neighbourhood. 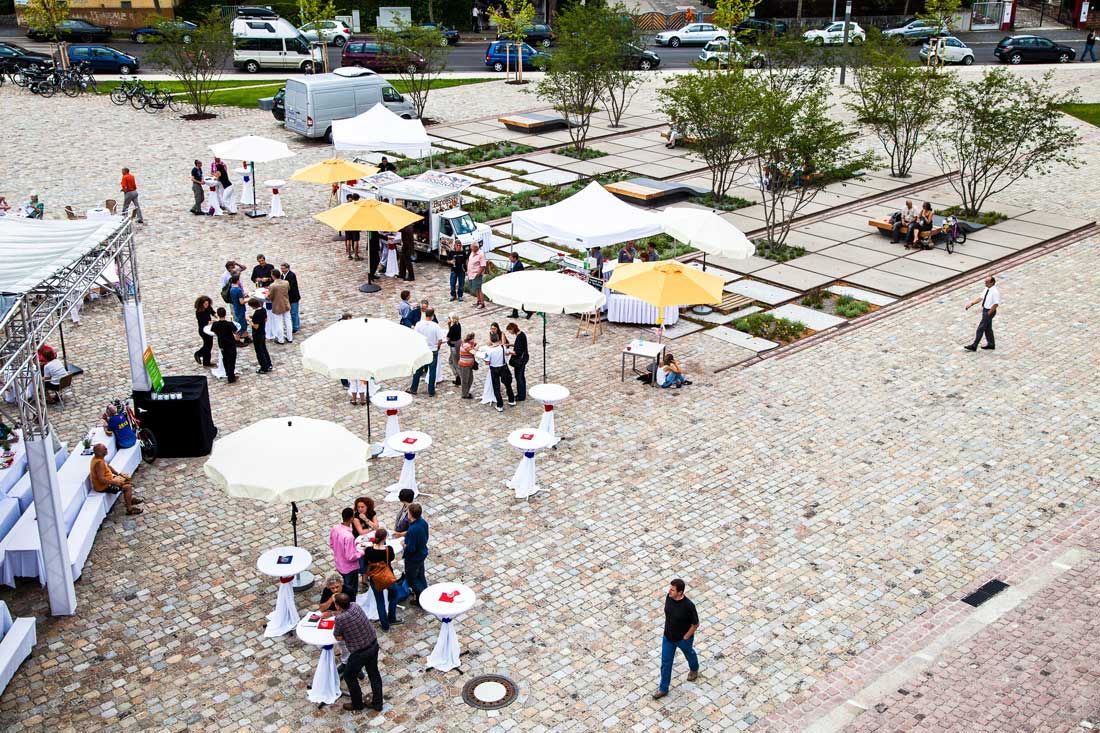 Every plaza has the potential to be a climate adaptation tool. To the relief of the city government, Ramboll Studio Dreiseitl started by disconnecting the site from the local combined sewer system, which is already over-capacity during storm events, a disaster waiting to happen. We saw the potential for the plaza area to contribute to reducing the heat island effect by using permeable paving with creeping thyme and planting pockets. These permeable surfaces can breathe, increasing evaporation and cooling the city, thus providing a micro-situational mitigating of the heat island effect which increasingly causes sudden, heavy downpours in summer. This effect has been extensively researched by the Technical University of Berlin, and we can see parallels worldwide. The plaza is in part amphibious, with the bench-planting area designed to flood during heavy rain events that exceed the soil infiltration potential, ensuring safety zones in worst-case scenarios. 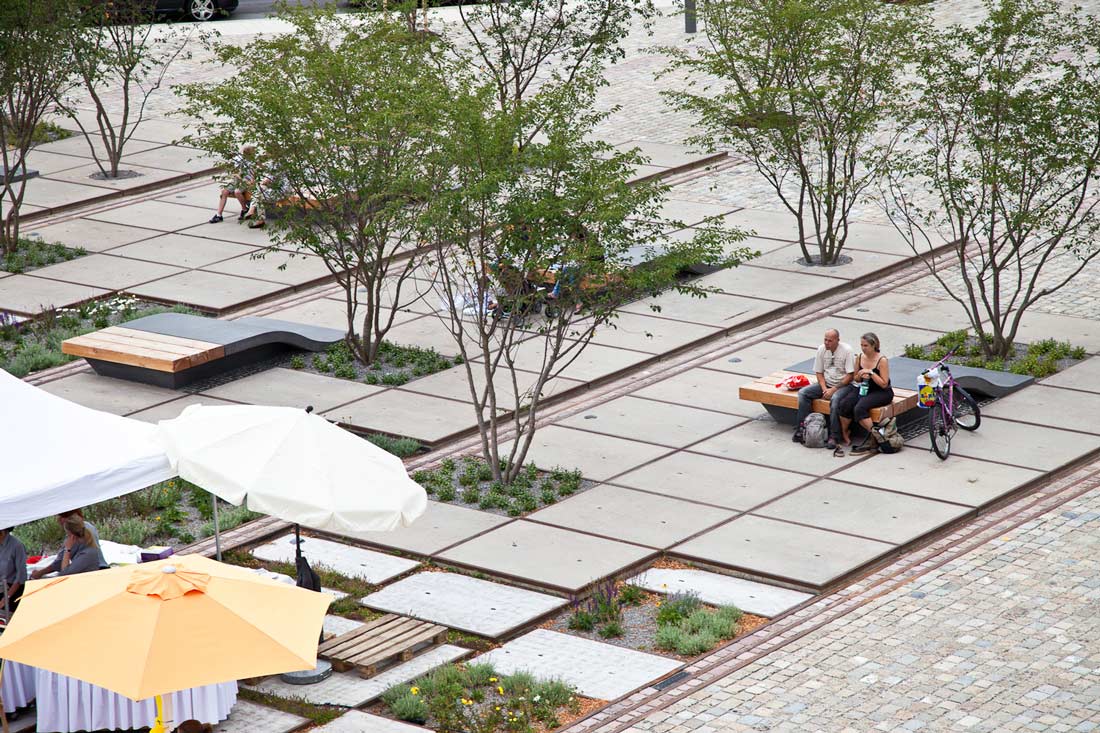 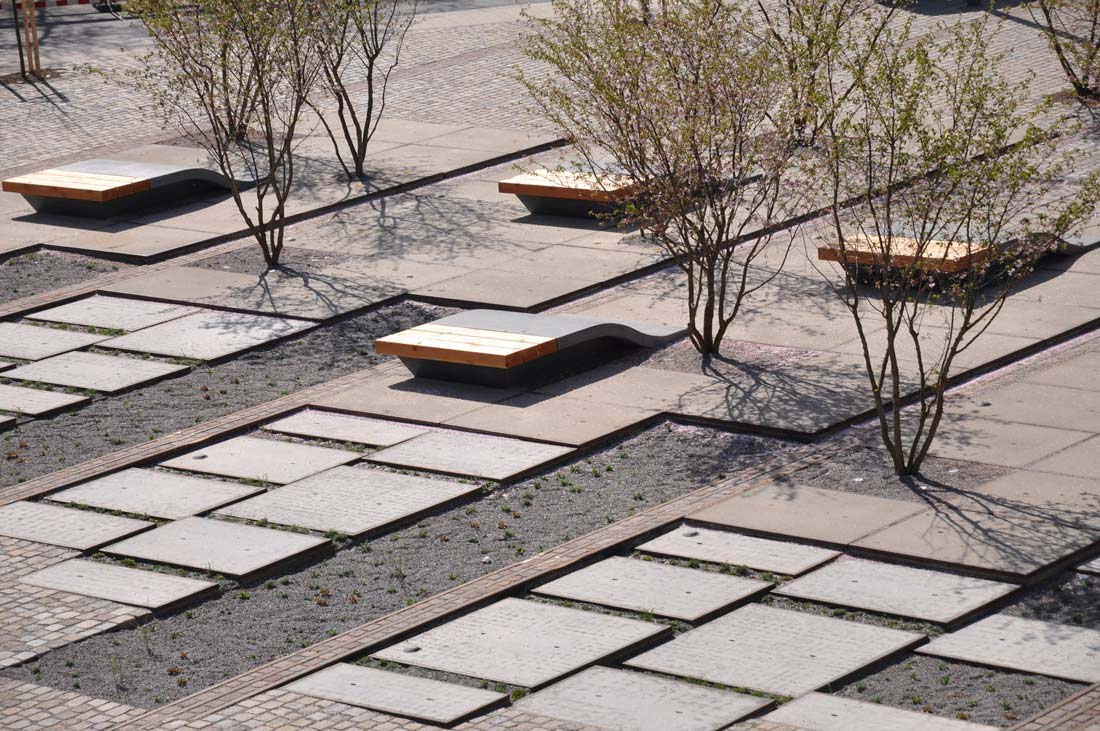 Low-maintenance beautiful planters are actually cleansing and infiltration points for a large subsurface gravel trench, from where the rainwater can recharge the groundwater table. Using this innovative, load-bearing filter medium reduces the hydraulic overload on the sewer system. No rainwater is fed into the sewer system; instead the groundwater table is recharged. 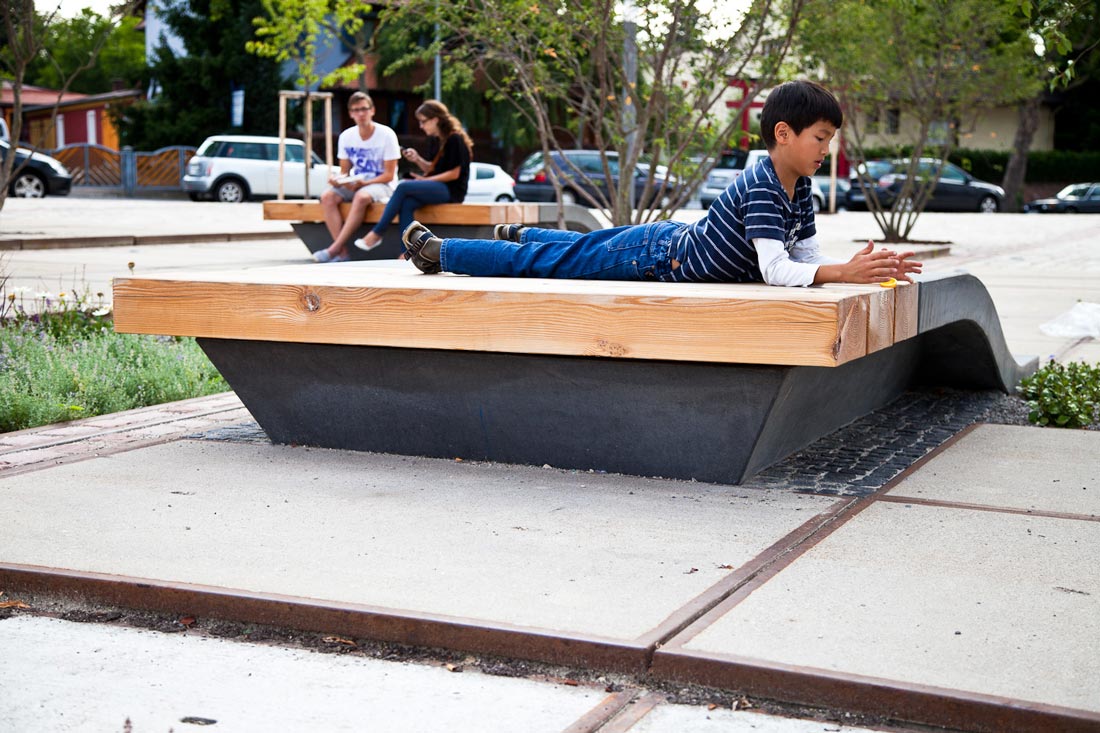 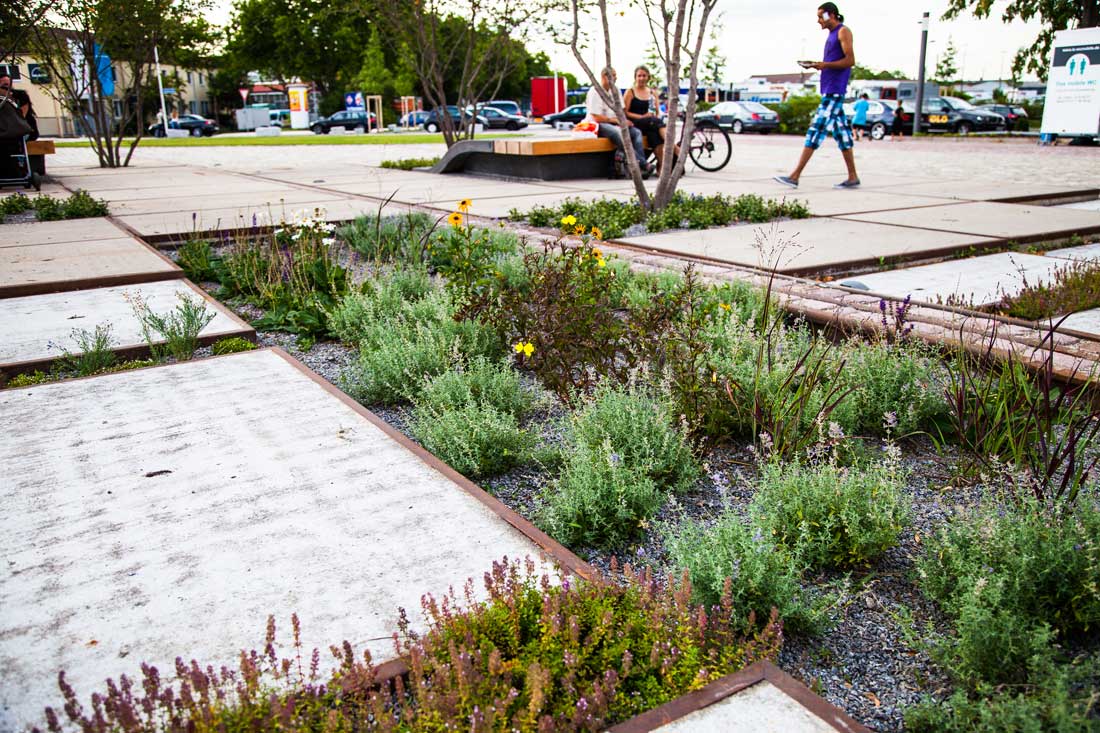 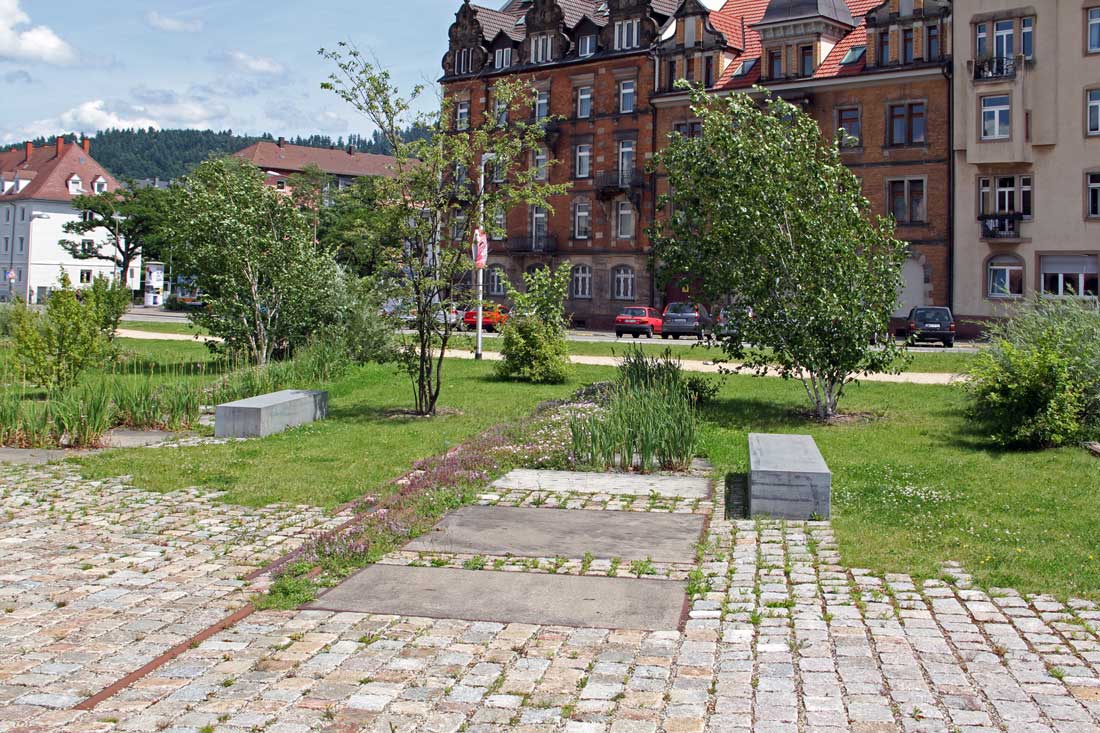 Design elements on the plaza playfully recall the historic past of the site, which was a freight railyard. The benches are oversized so that several people can sit together, or individuals can spread out and find peace and space in a dense urban city. Healthy cities are fun cities: the importance of nearby park experiences has been extensively documented as a positive resource for mental and physical health. The benches are profiled to recall the breaknoses of railroad tracks and are softly shaded by a grove of multi-trunked serviceberry trees (amelanchier). Original railroad tracks were salvaged and recycled as paving inlays. Laid out as intuitive spatial distinctions, a paved area is a functional surface for markets and local events to take place, and a grassy corner is a pocket park which provides the summery feeling of soft grass underfoot. A new café anchors the bench area, where the bright, modern façade provides a vibrant juxtaposition to the historic customs hall. 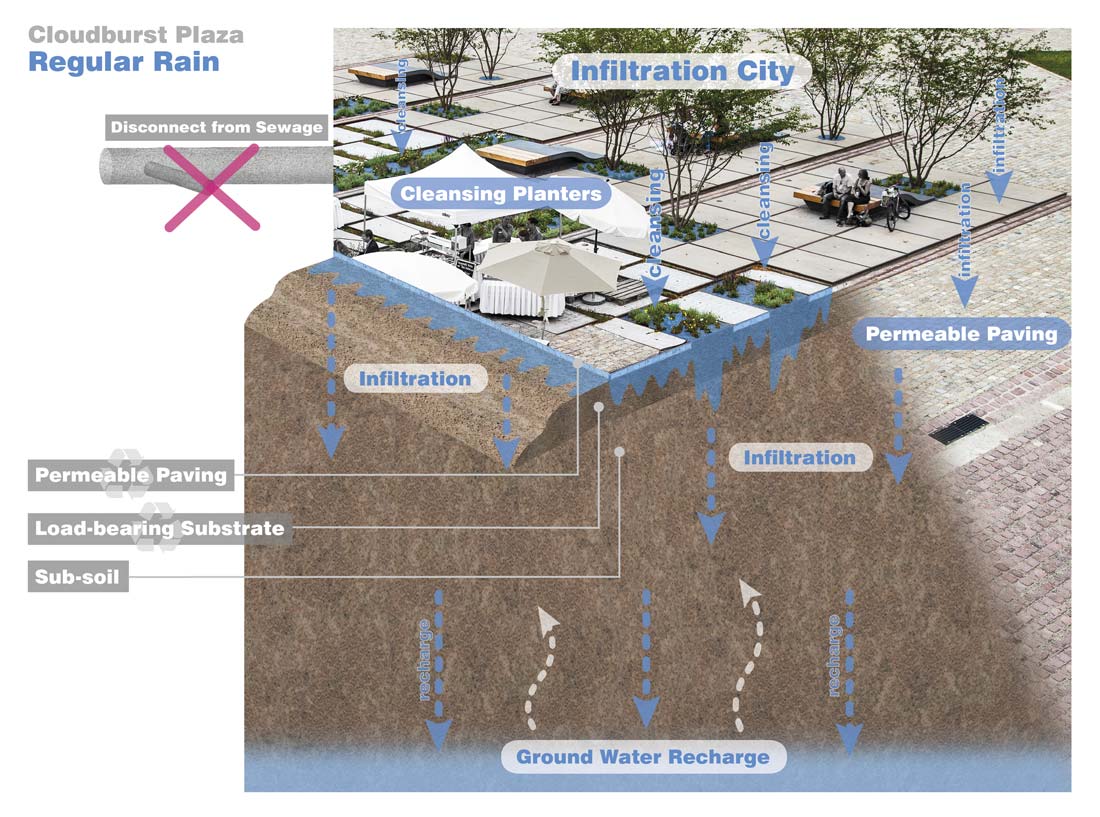 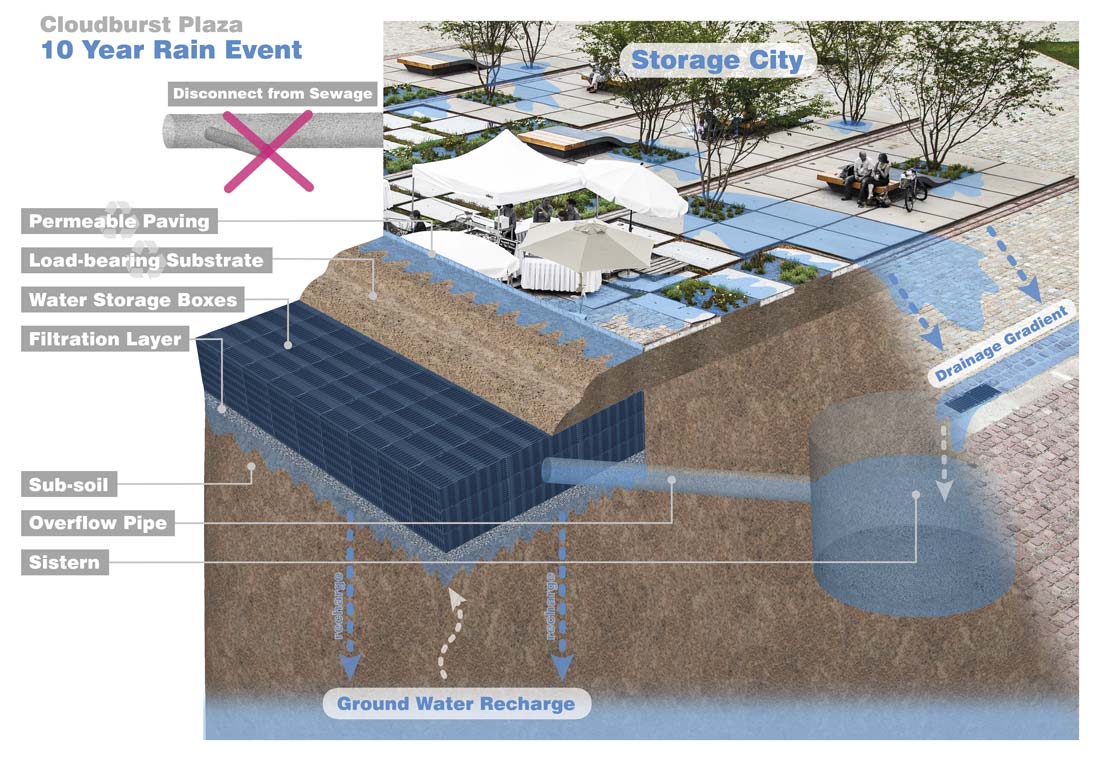 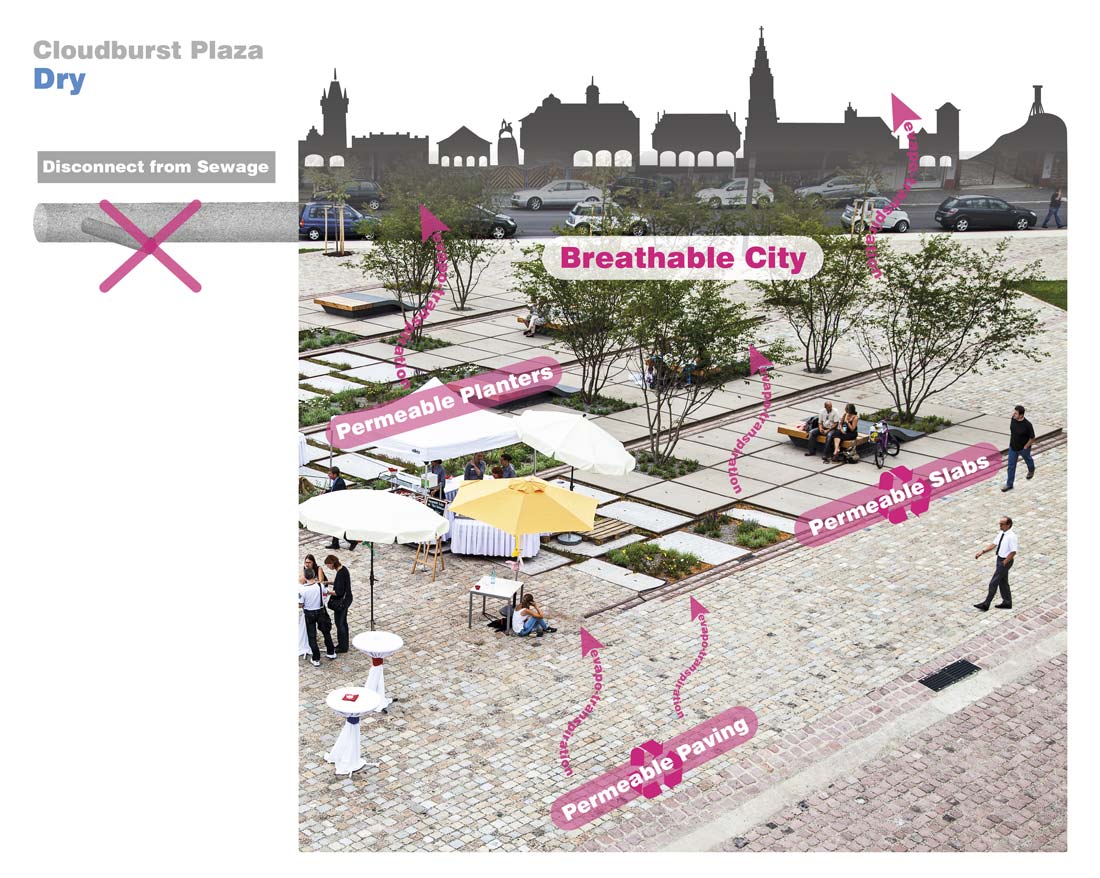 100% of the hardscape materials are high-quality demolition materials recycled from the old railyard. This makes sense not just from a resource management point of view; it also harmonises the new clean modern design with the historic architecture of the customs hall. The feeling of the plaza is creative and light. The Zollhallen Plaza is an implemented vision for climate adaptation, where city infrastructure is affordable, low-maintenance, multi-functional, and a cultural asset supporting people in their daily lives.

« Nordhavn: a New City from an Industrial Past
Ogden Centre for Fundamental Physics: a Spiral of Collaborative Cosmology and Space Science »