The Dutch know how to live with water. The Zalige bridge is the proof of this. The bridge is slowly submerging under the rising water and is reachable only through stepping stones. It becomes the ultimate place to experience high water. In the Dutch city of Nijmegen, where the bridge is located, water levels of 11.50 m NAP+ have been measured. Such a height has only been reached once in the last 15 years. In the past this would have been a threat; but now the high water becomes an attraction. People walk over the bridge and through the river park to see and experience the high water. 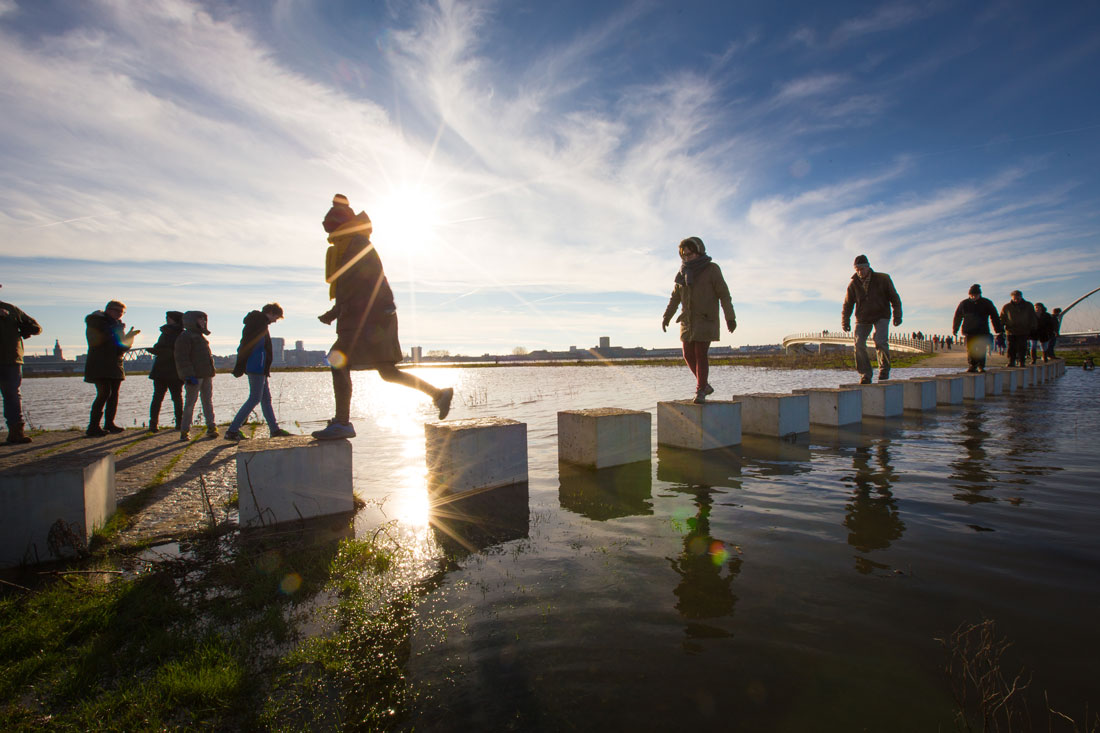 The Zalige bridge was completed in March 2016, but only now it is able to show its real strength as an integral part of the path structure of the urban river park in Nijmegen.

“All designs by NEXT architects start from the unique characteristics of a place. This bridge is built on the floodplains; this fact was used to design a bridge that strongly connects and interacts with the river landscape as a path over the water.”

Michel Schreinemachers, partner at NEXT architects 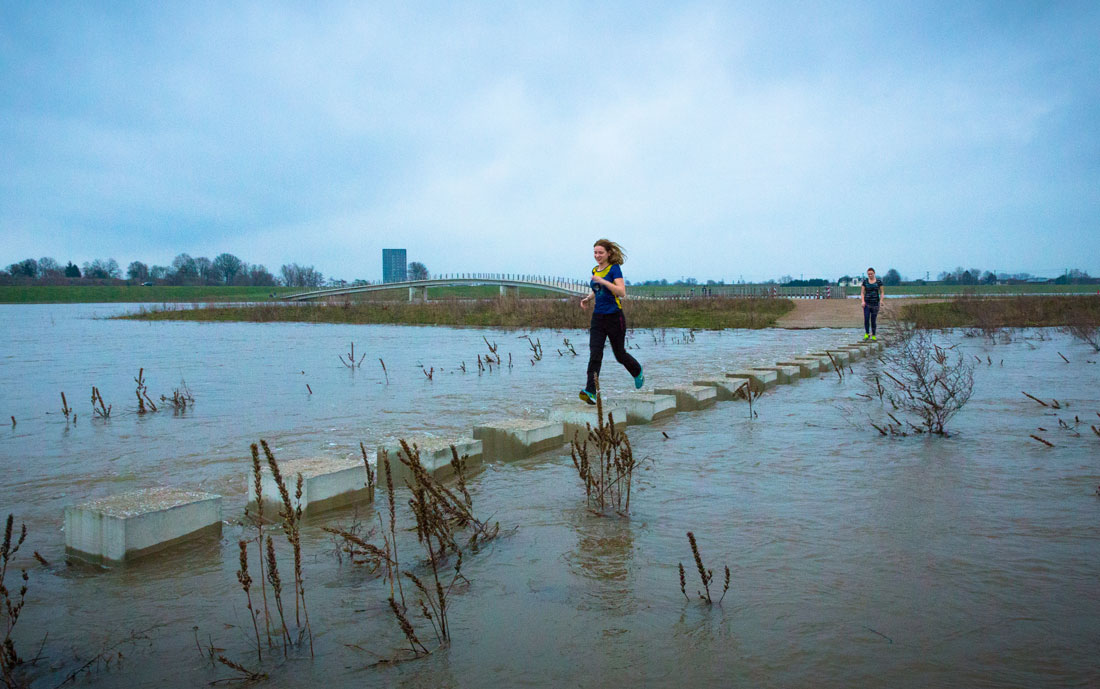 Normally, the river has an average height of 7 m NAP+ and the bridge stands high above the water. The bridge landings and the stepping stones were designed to be perfectly aligned with the profile of the landscape. When water levels rise, some parts of the bridge submerge, changing its appearance and its use. “It makes people experience the changing water levels,” says Schreinemachers. 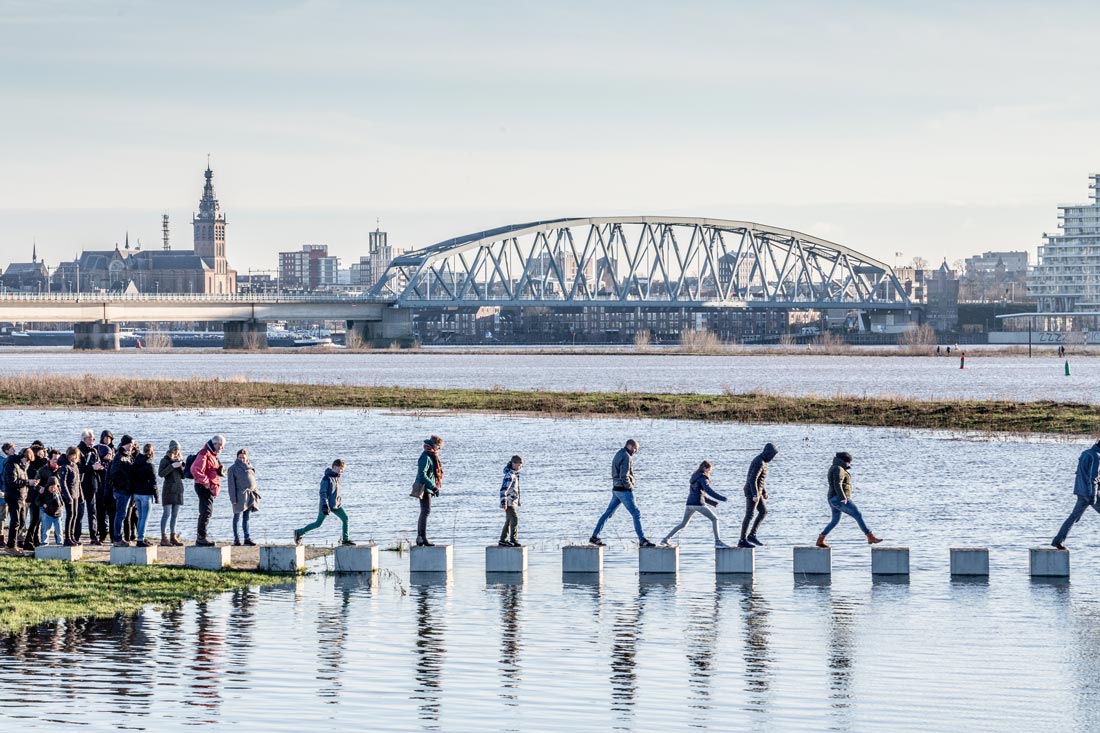 The Zalige bridge is part of Room for the River. This is a nationwide project, initiated by the Ministry of Infrastructure and the Environment in collaboration with provinces and municipalities, that prevents flooding by giving more room to the river. Room for the Waal, by the City of Nijmegen and i-Lent, is the largest project within the national programme and involved relocating the dike and constructing an ancillary channel in the flood plains: a bypass for the river. This is the first time that the newly created bypass has had the opportunity to prove its efficacy. 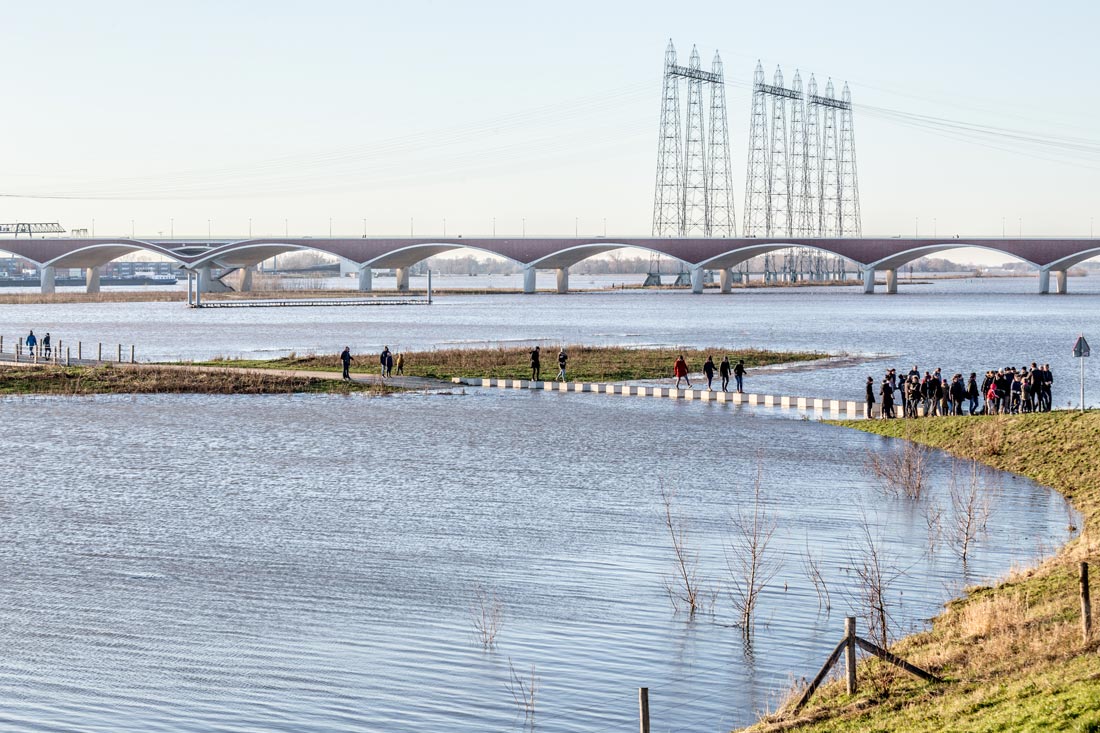 “Awareness of water issues is still low, unfortunately,” said Henk Ovink, first Special Envoy for International Water Affairs for the Kingdom of the Netherlands, a few days ago. “That is why we have to tell more stories to make people understand how important the water issue is.” That is exactly what the Zalige bridge does: this bridge by NEXT emphasizes the dynamic character of water by letting people see and experience the changing river landscape. The attention and enthusiasm for the high water shows how we manage to live with water in the Netherlands, not by restraining it, but by giving it enough space. If you can’t beat them, join them. 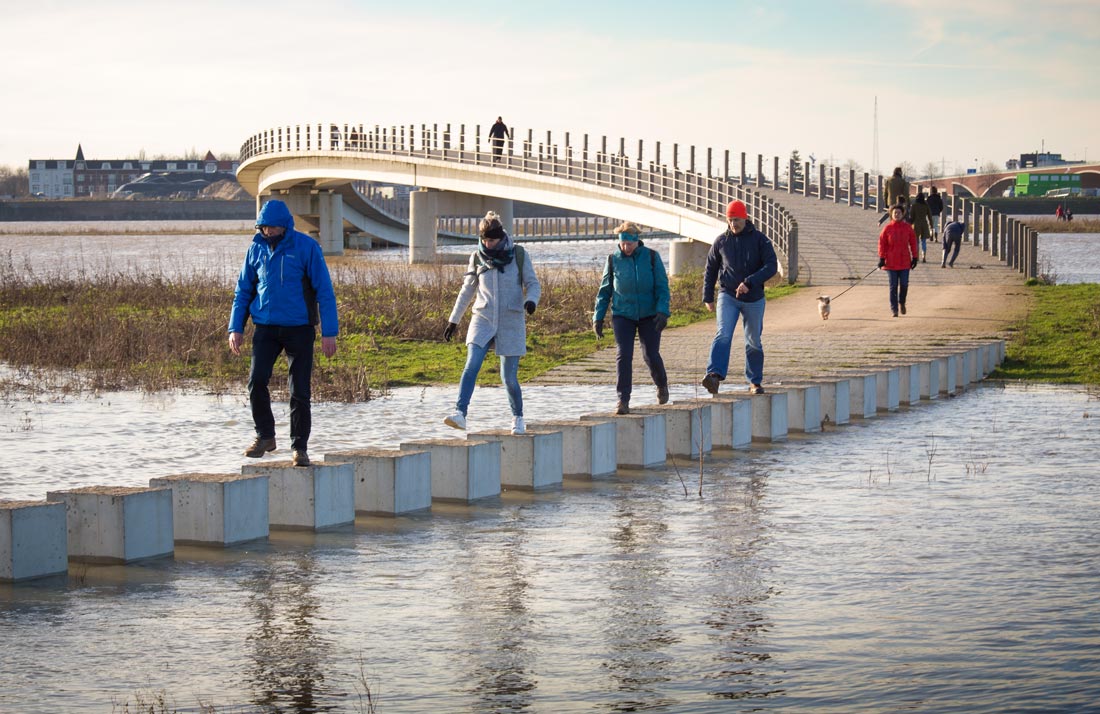 The residents in the river region were confronted with anxious times in 1993 and 1995. The water levels were extremely high and the dikes just managed to hold. A quarter of a million people had to be evacuated. Extremely high river discharges will occur more frequently in the future, and for this reason it was decided to ensure that the rivers could discharge the expected greater volumes of water without flooding. In response, a nationwide project has started: the Dutch Room for the River Program. The goal of the program is to give the river more room to be able to manage higher water levels. At more than 30 locations, measures will be taken to give the river space to flood safely. Moreover, the measures will be designed in such a way that they improve the quality of the immediate surroundings. 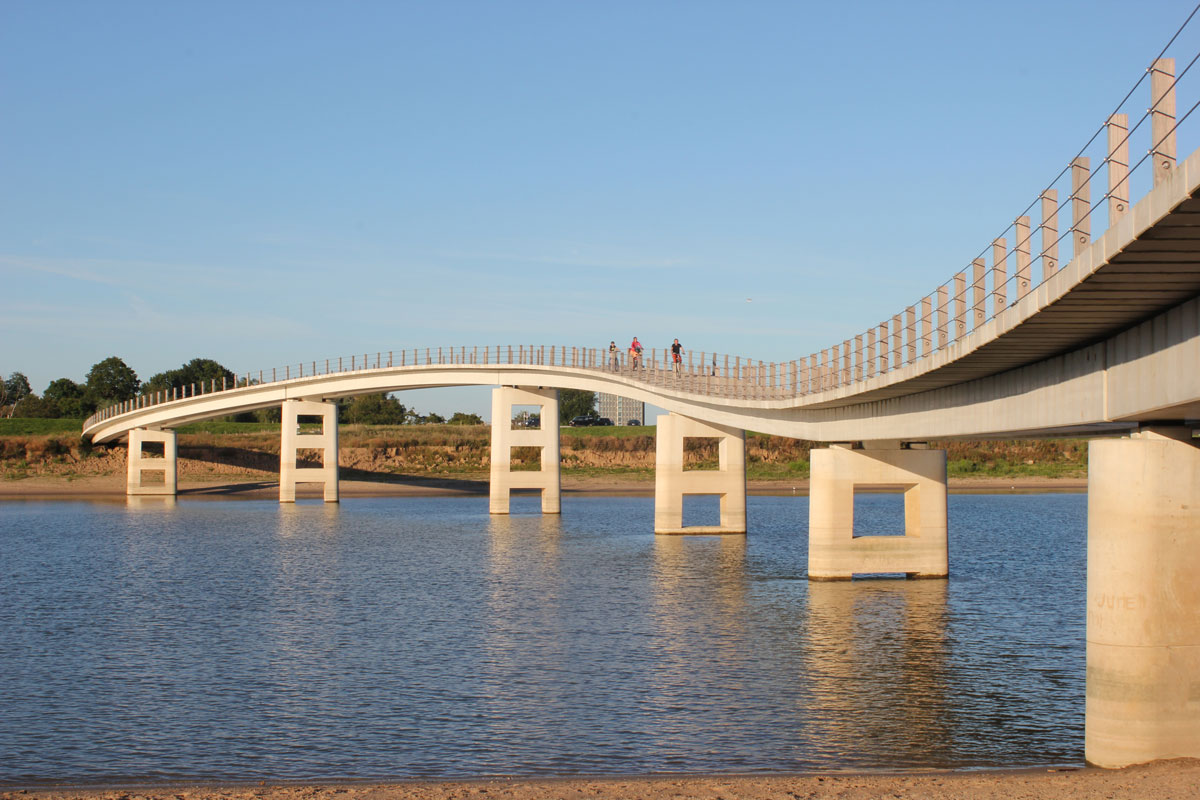 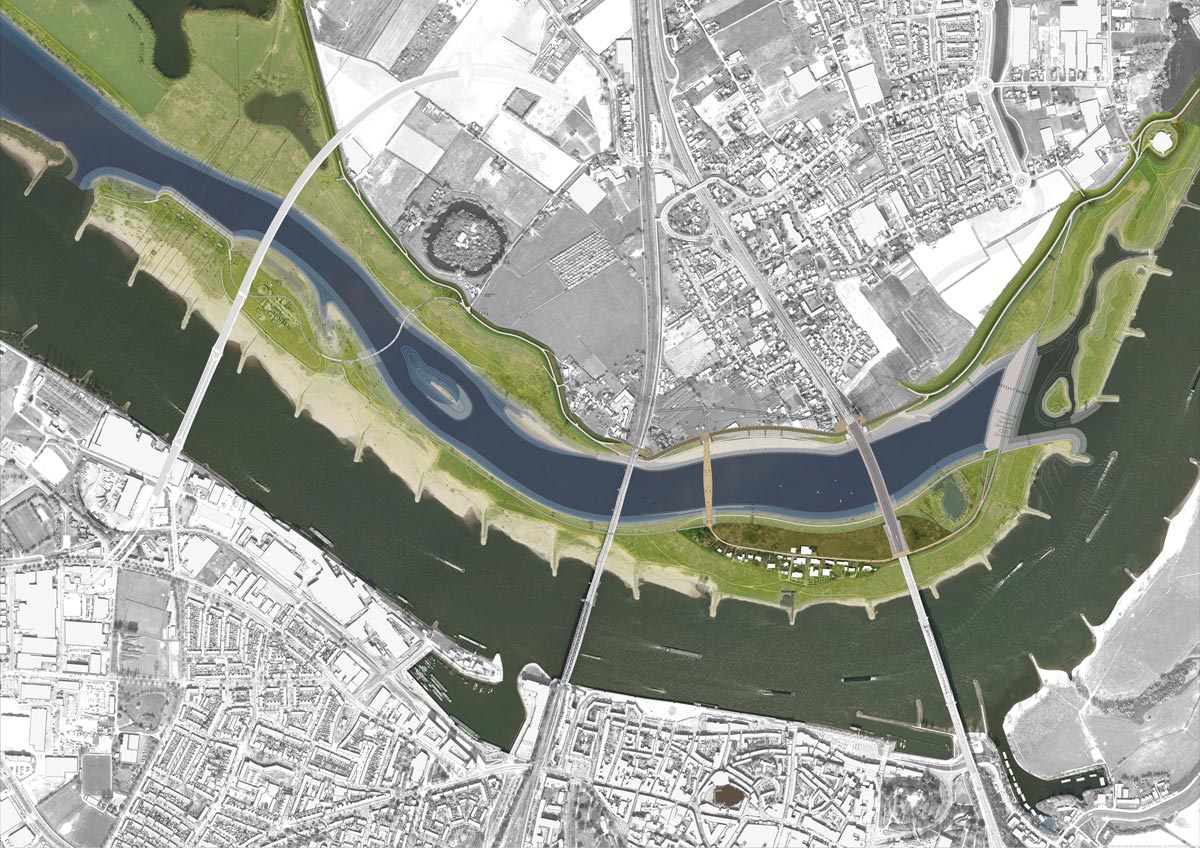 The Citadel Bridge in Nijmegen is part of Room for the Waal River within the national program. By creating a bypass for the Waal River a new island emerges: Veur-Lent. With a length of 700 feet, the bridge connects the island and the northern riverbank. Its location on the floodplain makes the bridge partially submerged in the water a few days a year, with an average fluctuation of about 5 meters. This particular characteristic was used as one of the main design principles for the bridge. 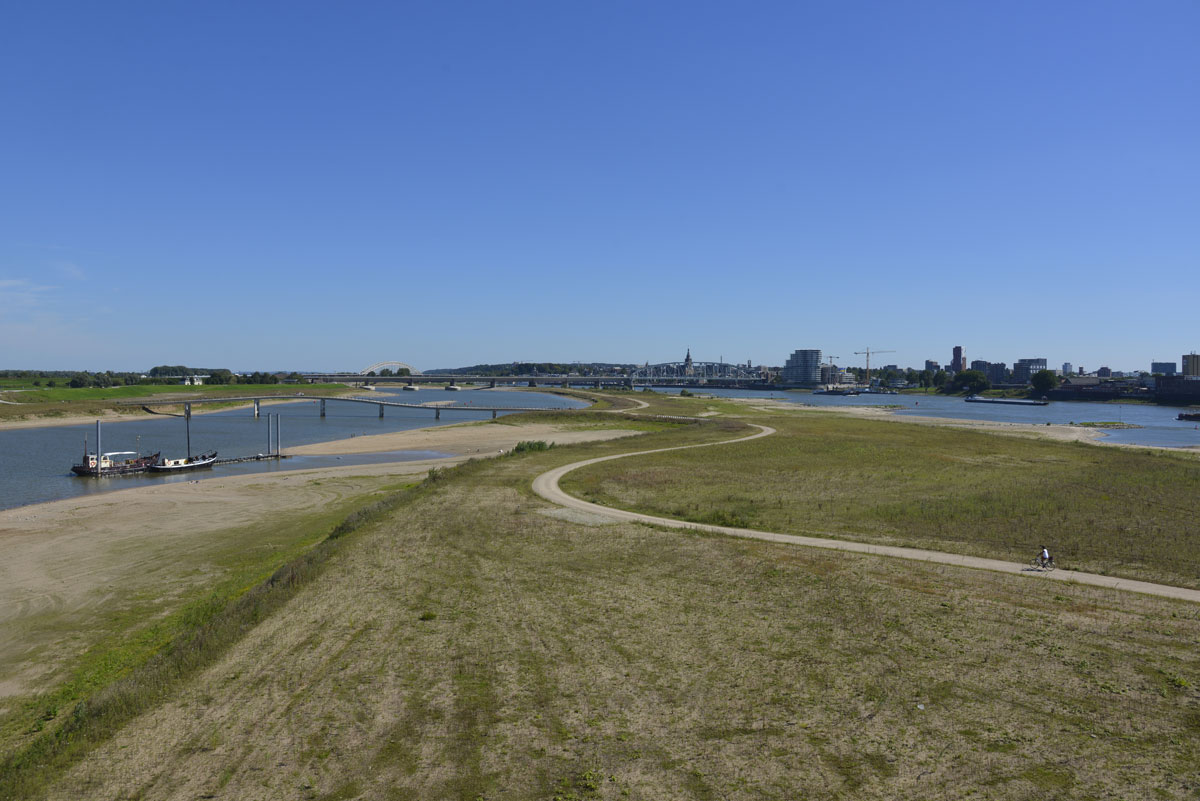 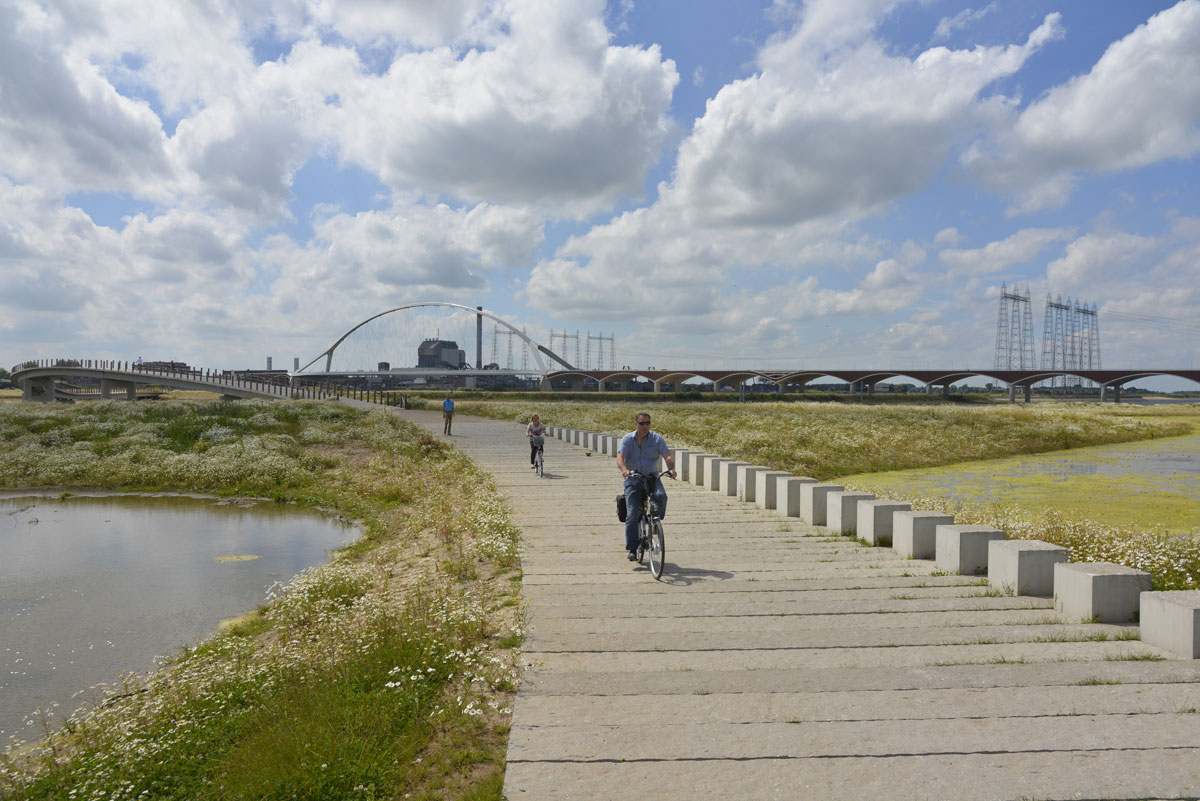 In the Urban River Park, the spatial quality of water safety thinking at the beginning of the 21st century will be made visible. To experience the water dynamics is a major opportunity. The Urban River Park shows that river dynamics are the driving force behind an exciting and enjoyable new landscape. The fluvial dynamics are the basis of a water calendar, which is translated into a typology of the trail system in the park. 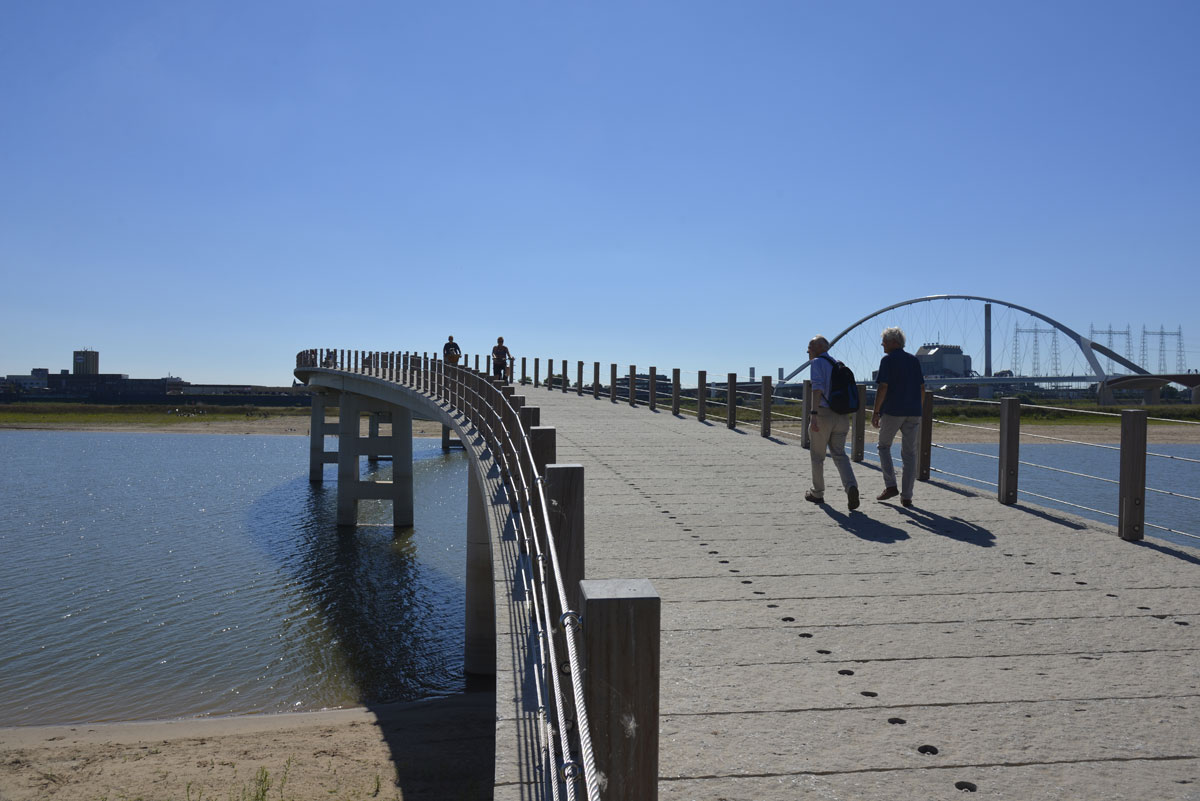 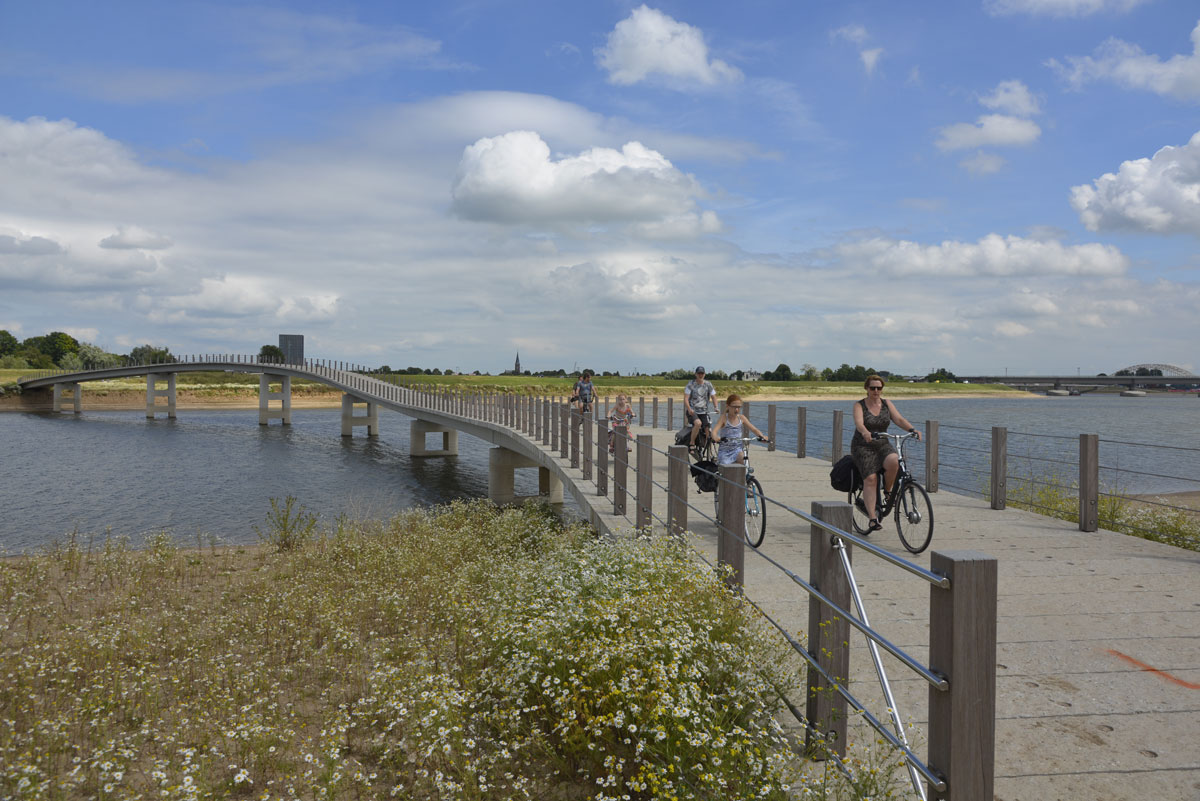 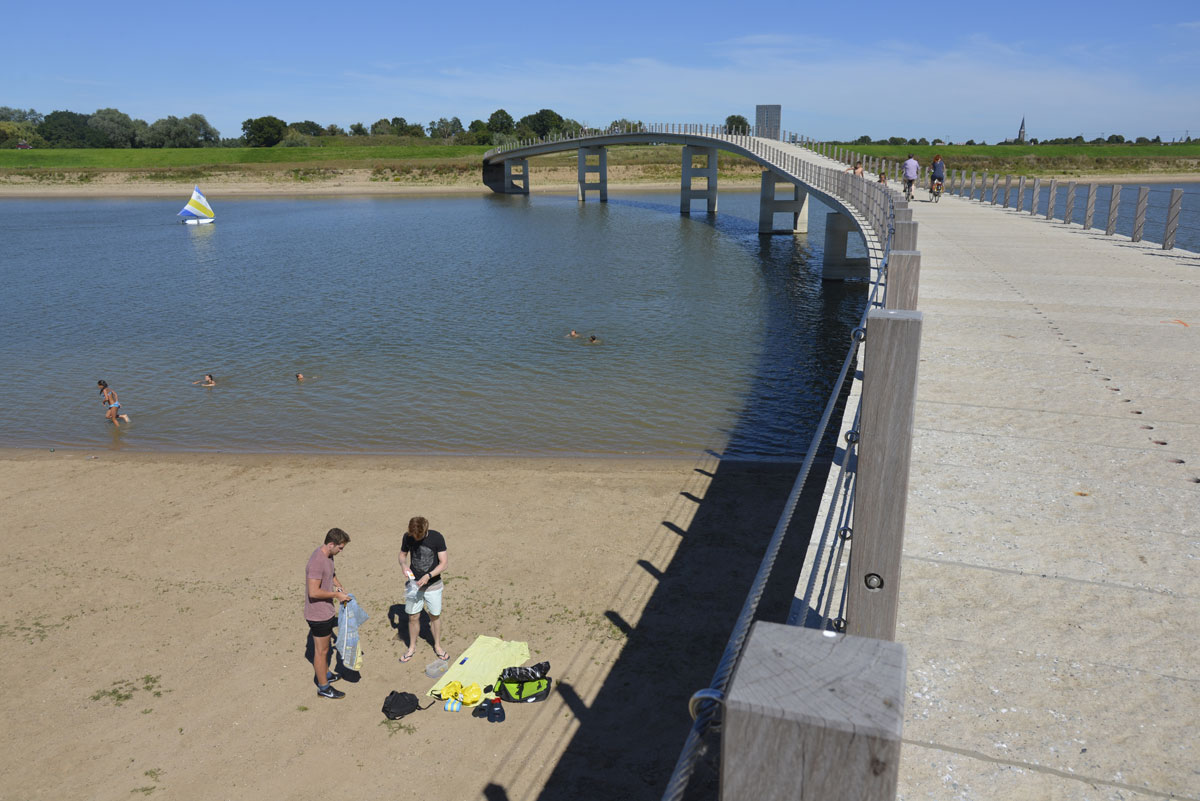 The curved Citadel bridge becomes an integral part of this path. At low tide, the bridge deck rests on land; but with rising waters, the path and bridge submerge. The transition between bridge and path is smooth and gradual, and the longitudinal profile is asymmetrical, making only the lower part of the bridge disappear at high tide. Then the dynamics of the landscape are most visible, and the rising water becomes an attraction as the high part of the bridge appears to float. Stepping stones that also can be used as benches enhance the recreational quality of the bridge. 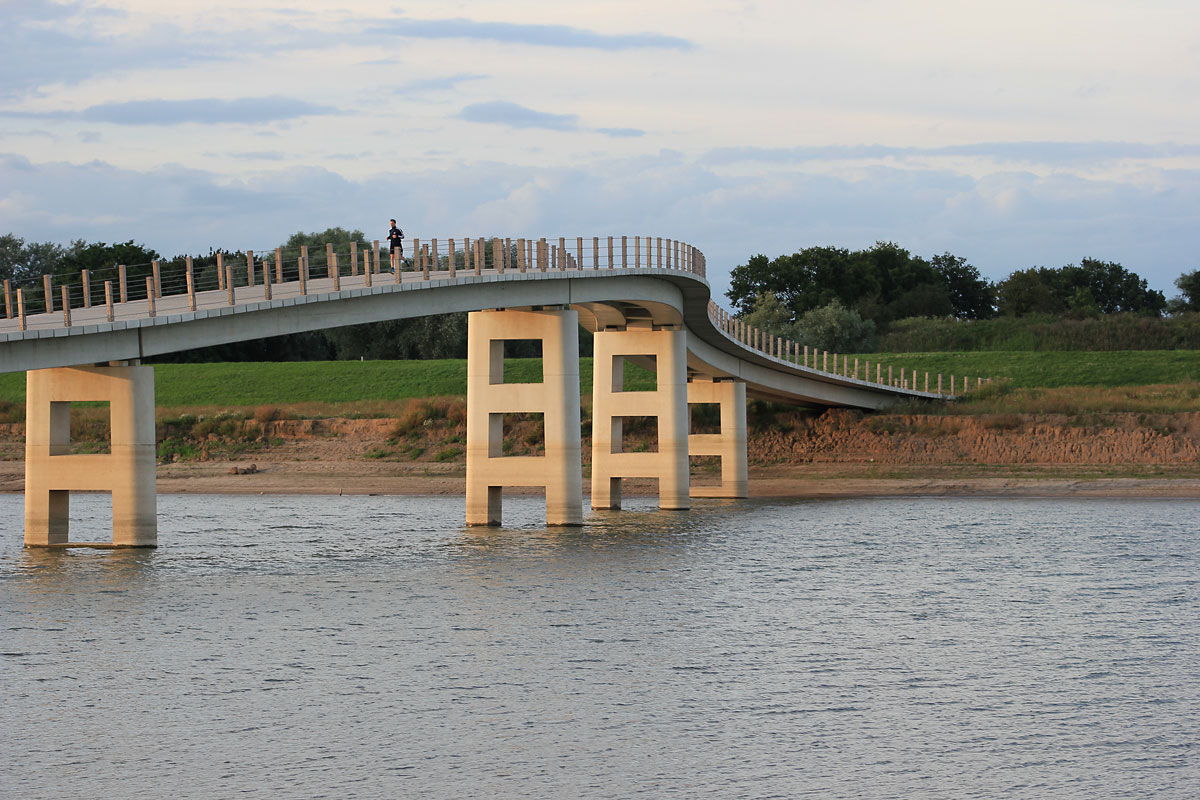