University of Bambey: Looking for Shade and Water

In Senegal, shade and water are everything. This lecture-room block project, a close relative of another project in Gaston Berger, San Luis, which was commissioned by the Ministry of Education and the World Bank, is set in the city of Bambey, located 120 km west of Dakar. With a population of 20,000, Bambey stands out for its peanut and cattle farming, its scarce urban infrastructures and the harsh conditions of the surroundings. 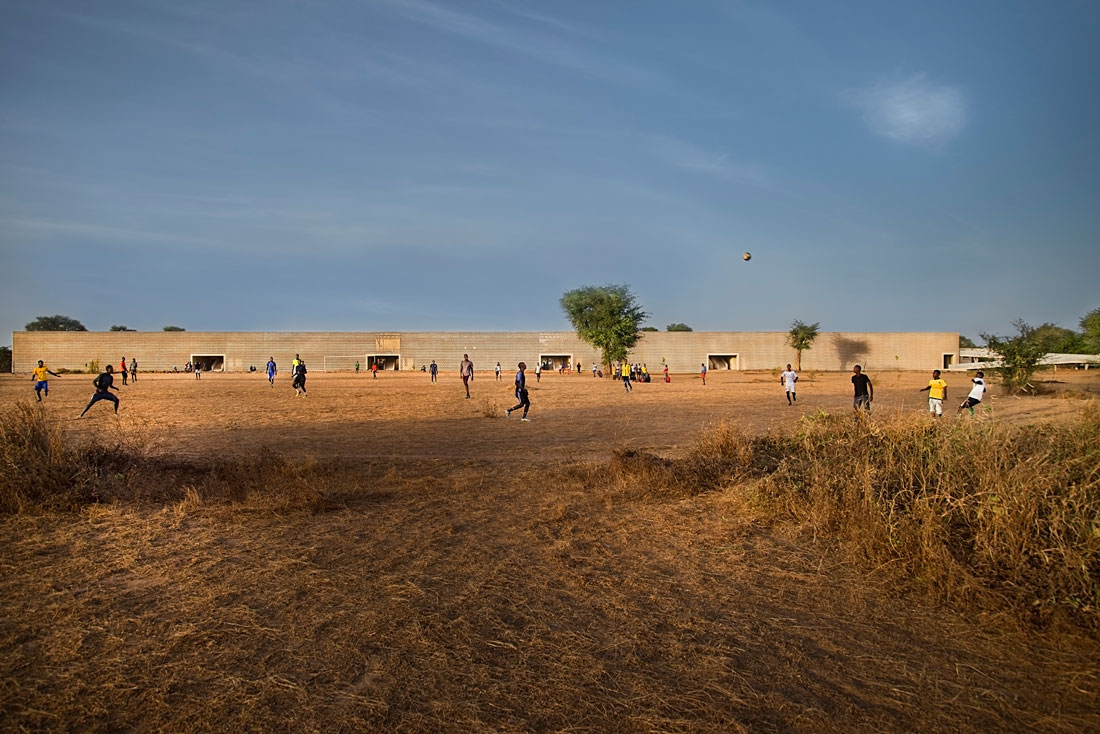 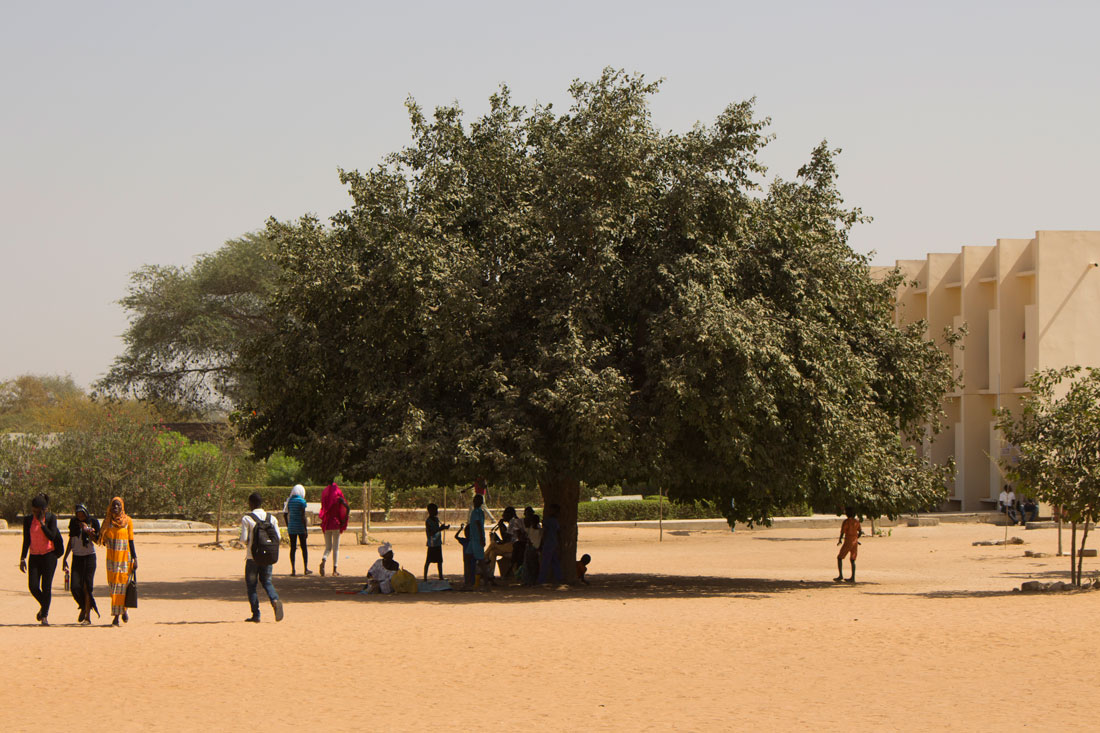 The University of Bambey is about 5 km outside the metropolitan area, occupying an area of 64 Ha and catering to 2,000 students. Its buildings, erected between 2004 and 2007, have seen their capacity reduced due to the growing student body. Therefore, the extension project was calculated for 1,500 students, with lecture rooms for 50 and 100 people, a 500-seat lecture hall, laboratories, computer rooms and offices for the teaching staff, all distributed over an enclosed built-up area of 4,200 m2 with 11,500 m2 of urbanized area. 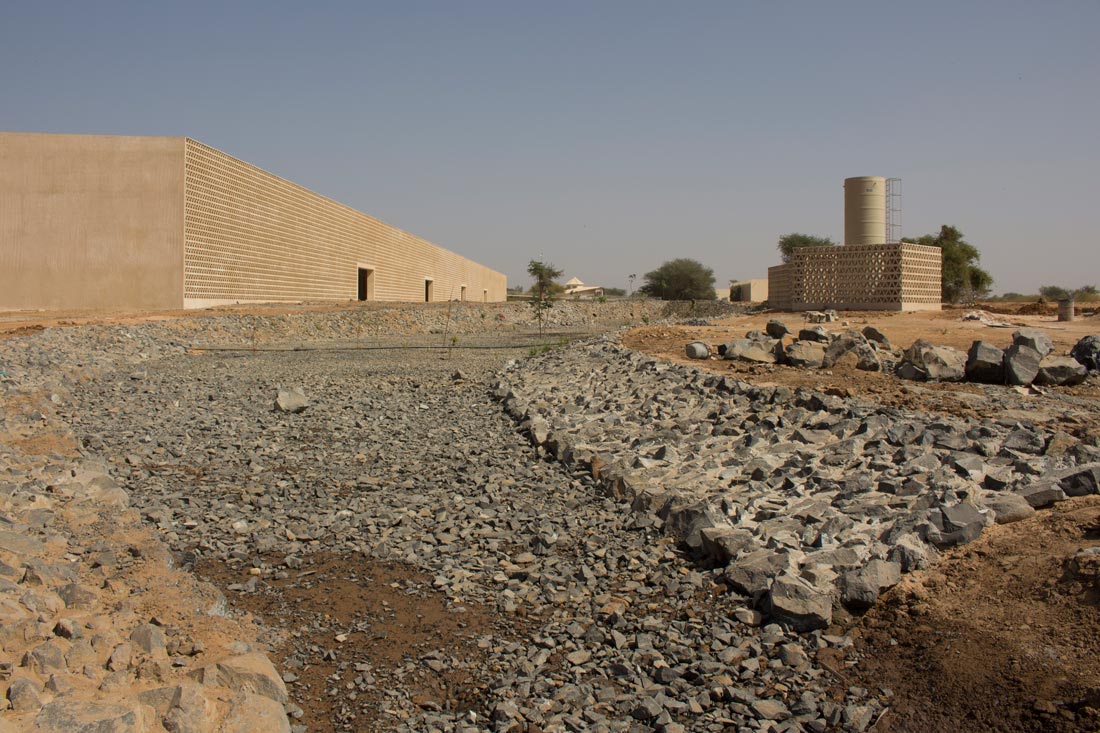 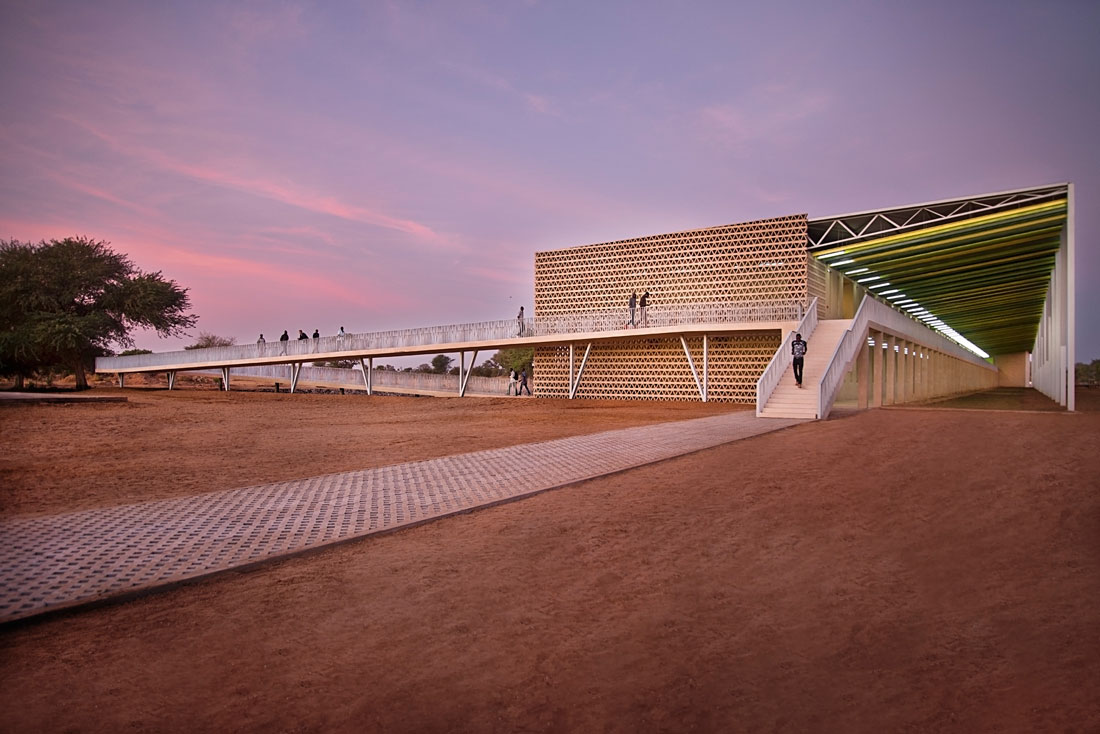 The project aims to respond to this context as a perfect machine, beautiful in its efficiency and without an engine. We found inspiration on campus by reproducing a great tree as a contributor of shelter, which would offer shade, coolness and comfort to its users without energy consumption. We developed the project by drawing on its cross-section, providing the building with a large double roof and a large lattice on the south façade – an L-shaped shield laying on its back, which avoids direct solar radiation but is permeable to air. This shield creates a Venturi effect, generating constant air flow between the building envelope and the lecture rooms, reducing the interior temperature by 10-15º C, a change from the outside temperature of 40-45º C. 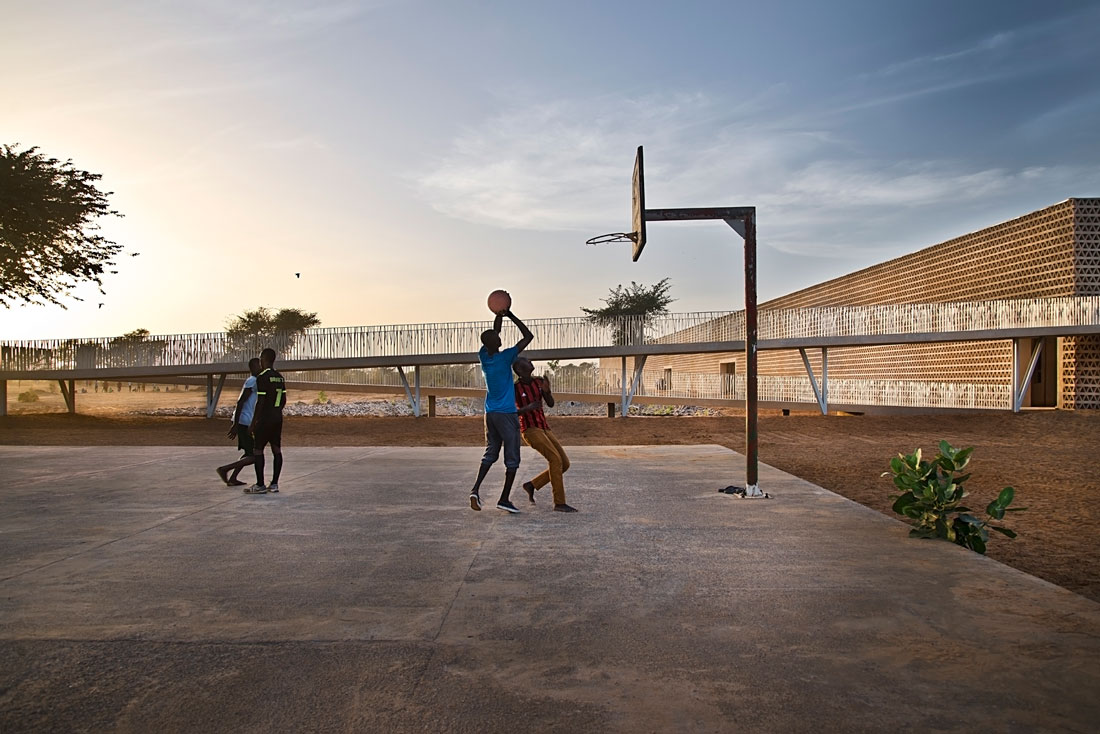 The building is both simple and repetitive in its construction, on a scale commensurate with the campus, very practical and integrated into the environment while generating optimal conditions for protection against the extreme climate. The roof is like a double skin supported by steel lattice beams: a metal sandwich panel with insulation on top, as a first barrier against heat and solar radiation, and a dropped ceiling of mineralized fibers on the inside, generating two layers with ventilation between them. For the south façade, we created a large latticework, permeable to air, which eliminates any solar incidence towards the interior and acts as a filter of solar radiation, which is extreme in this environment. At the same time, it still allows enough light through for the interior functional needs. We planted citronella grass in the cavity between the two skins to avoid the presence of malaria-bearing mosquitoes and to freshen up the space. As a complement, the roof is extended into a 10-meter-long canopy, covering a wide exterior area, sheltering students when they are not in class. 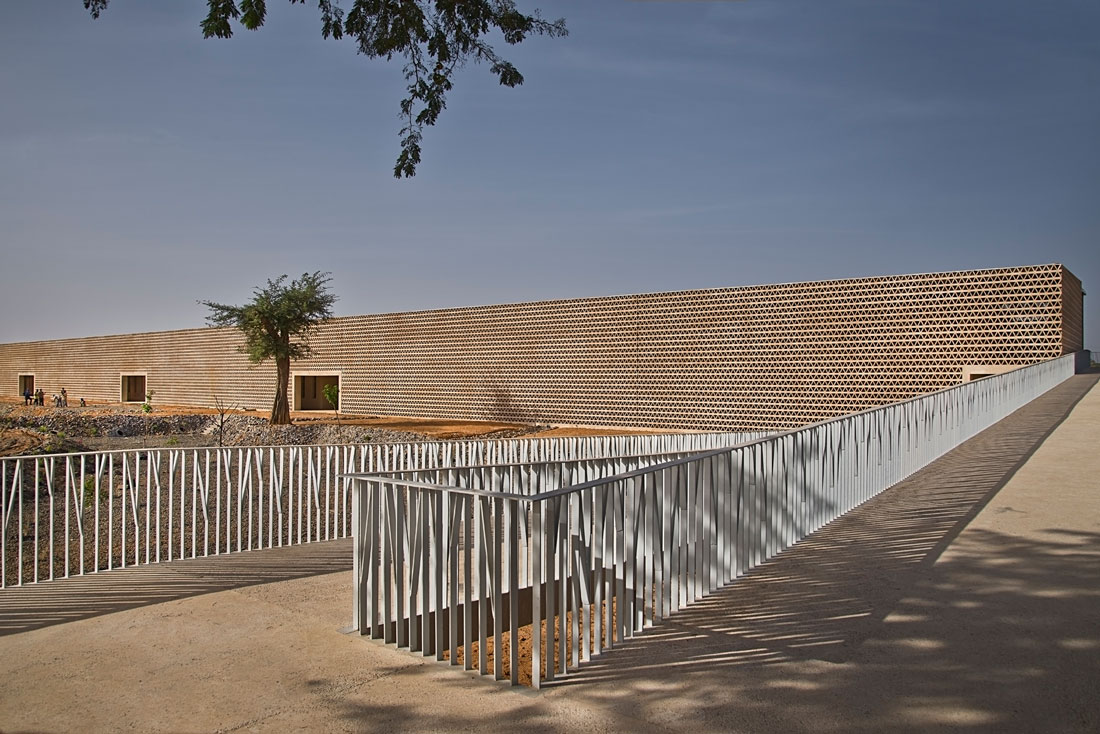 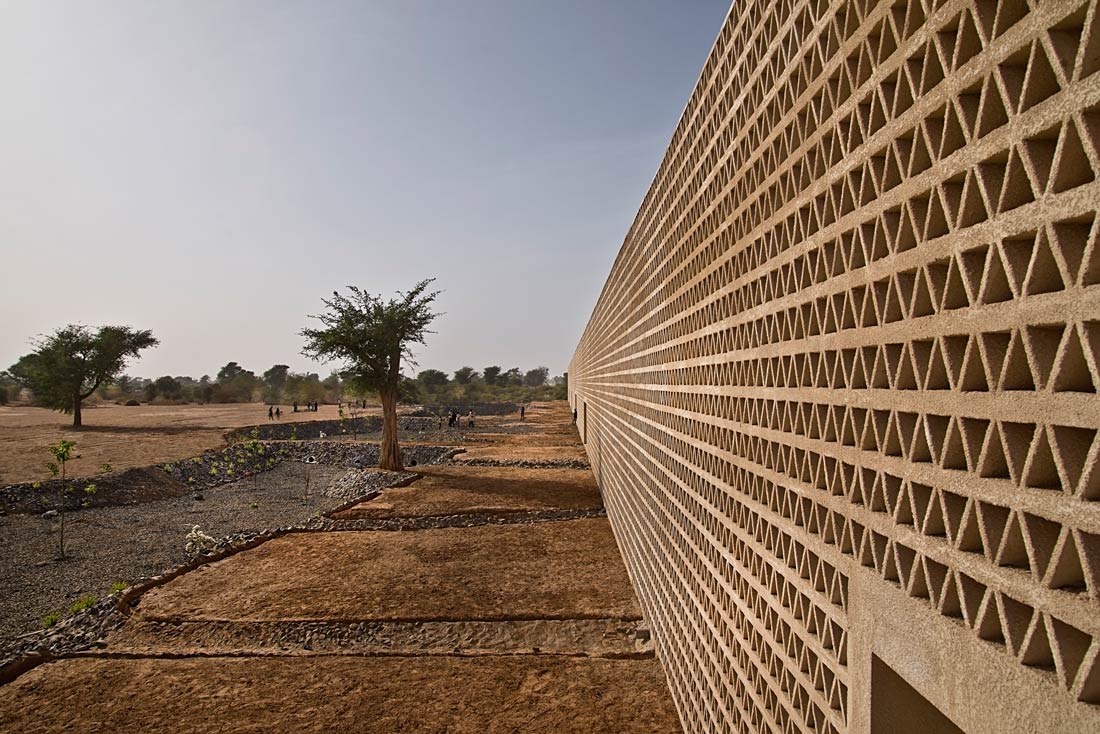 The combination of the double roof and the double-skin façade, with 1-meter and 3-meter cavities respectively, makes it possible to create a breeze: the heat concentrated on the outer skin of the façade ends up flowing under the roof, pushed along by its inclination. This system allows for a high percentage of outside heat to be dissipated while at the same time generating a constant flow of air through the cavity of the building’s envelope. 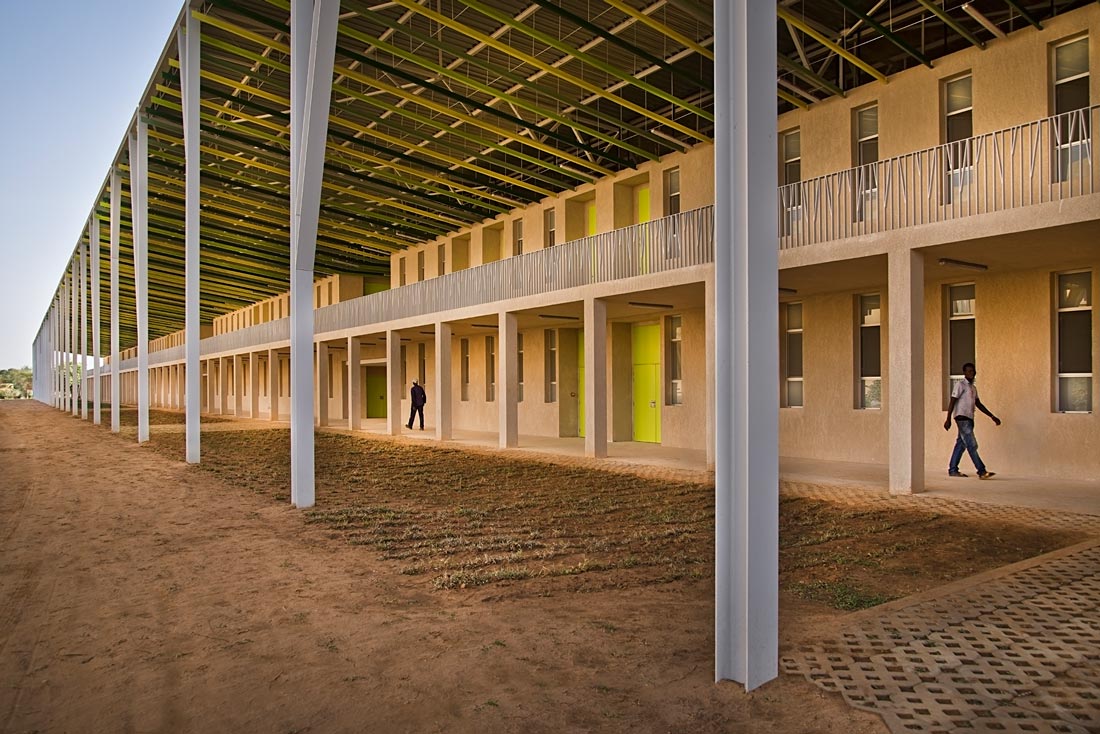 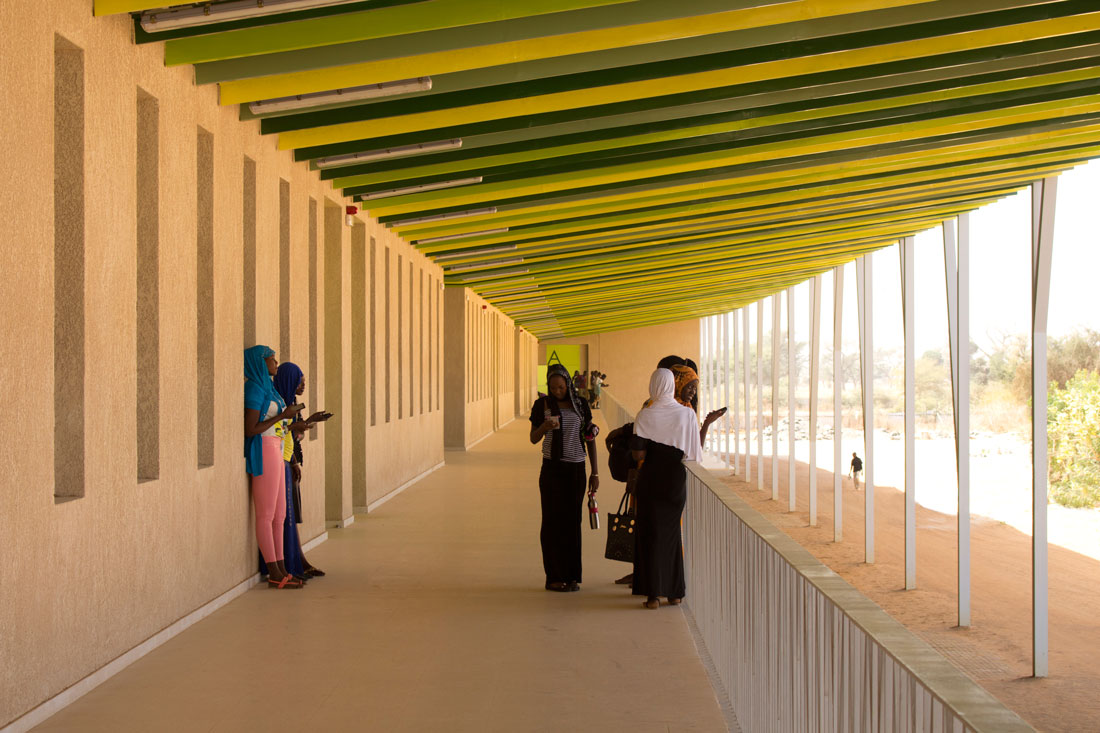 To resolve the lack of sewage and rainwater networks, we incorporated infiltration rafts with vegetation that collect rainwater by means of different-sized basalt-lined exterior canals. These retain sediments and reduce the speed of the water. The rafts can be interconnected in the event of saturation and are laid out in keeping with the surroundings as a natural meander, favoring the natural development conditions of native vegetation. 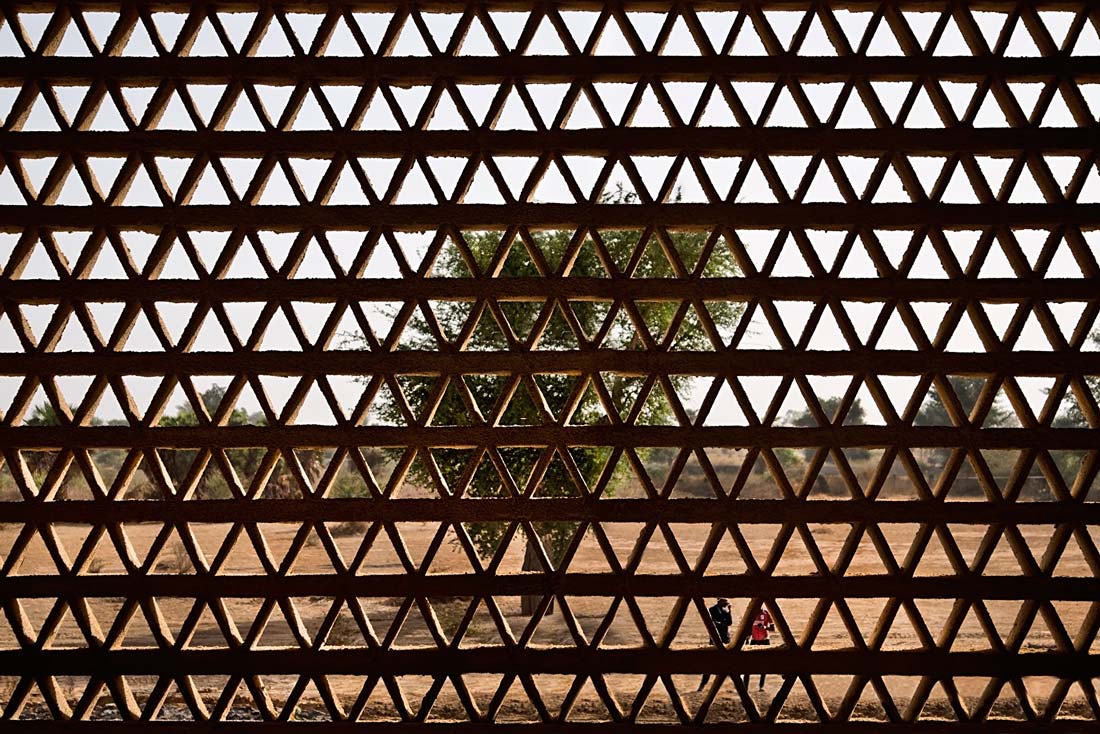 A purification system by means of activated sludge provides for the purification of waste waters, which, once purified, are discharged into the same rafts. The used sludge will be reused as agricultural fertilizer. 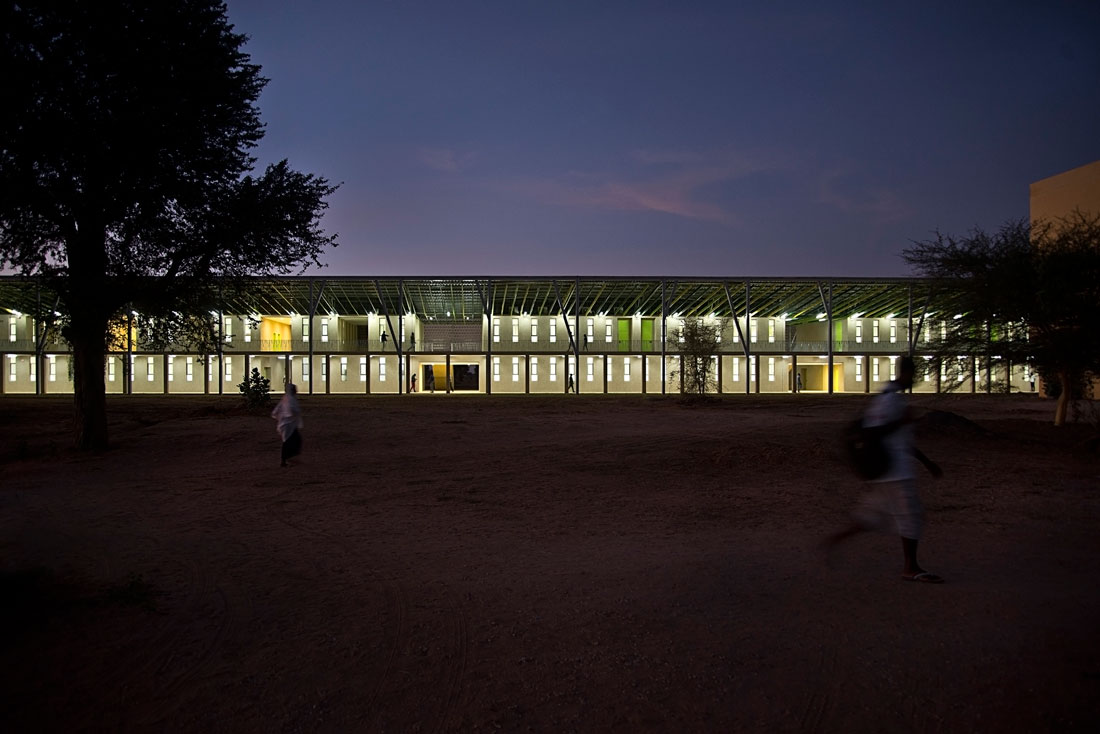 Lastly, we wanted the project to be sensitive to the social component. For this purpose, we designed a façade made up of blocks with triangular perforations that could be prefabricated in situ by the local workforce. As such, the 20,000 concrete pieces, similar in size to a conventional concrete block, were built manually on site by means of a stainless steel mold and then air-dried. The construction of the 2,000 m2 of the south elevation lattice employed over 100 workers from Bambey for six months.