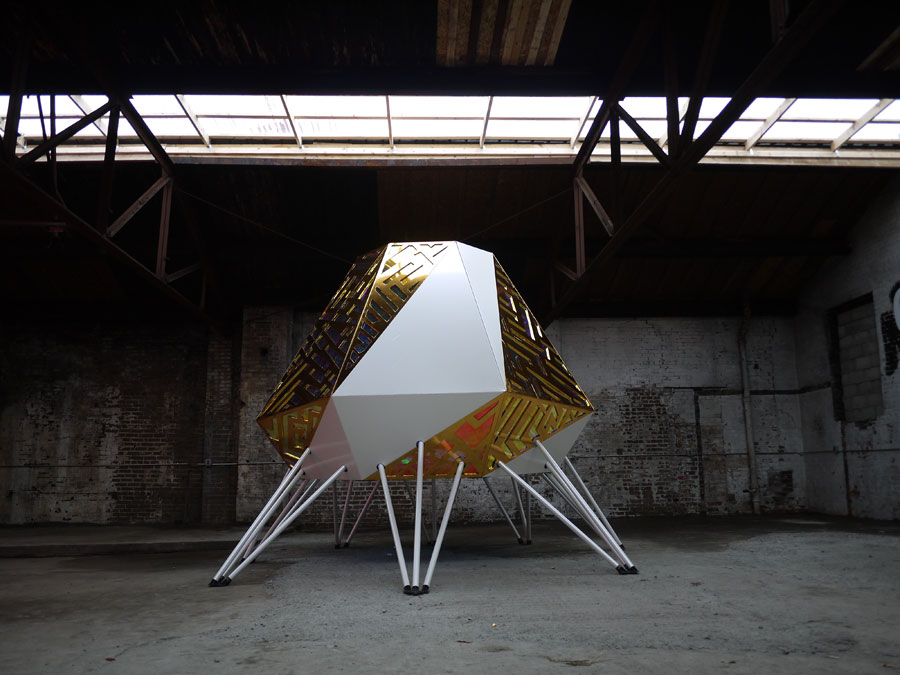 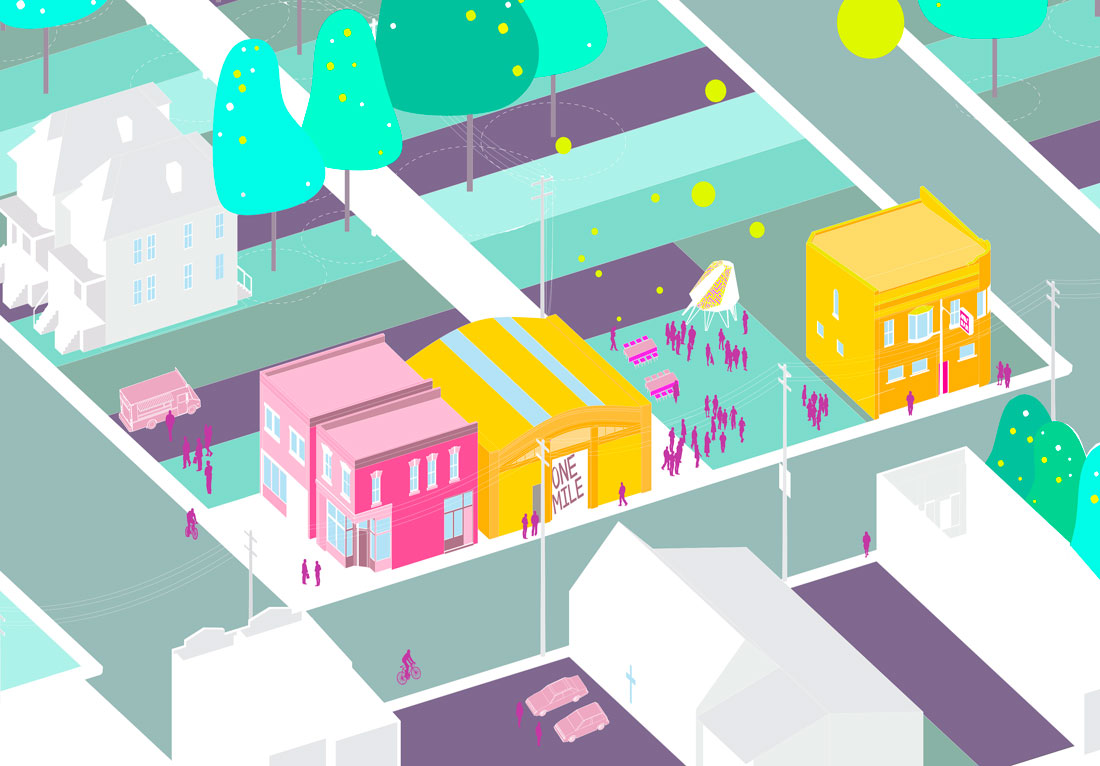 The Mothership at North End 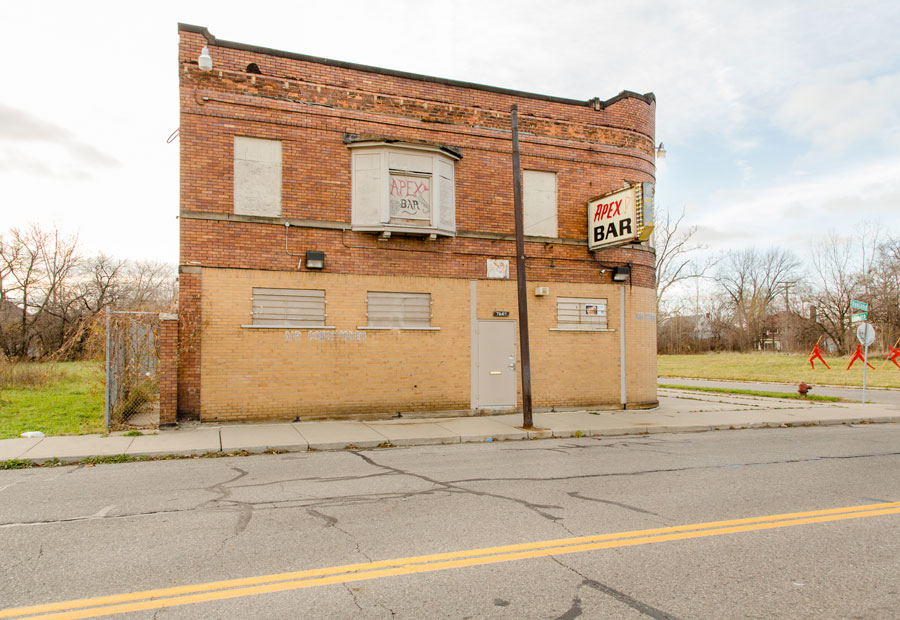 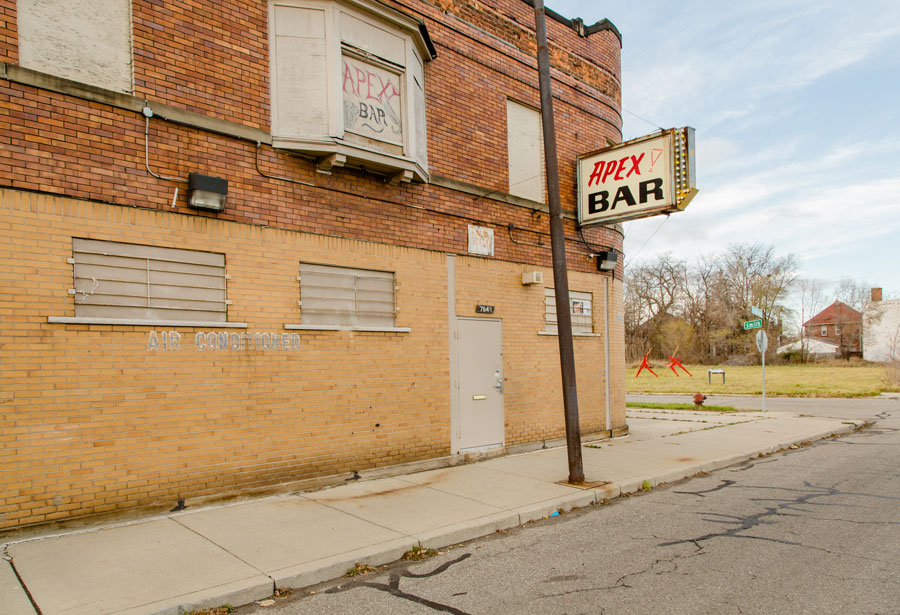 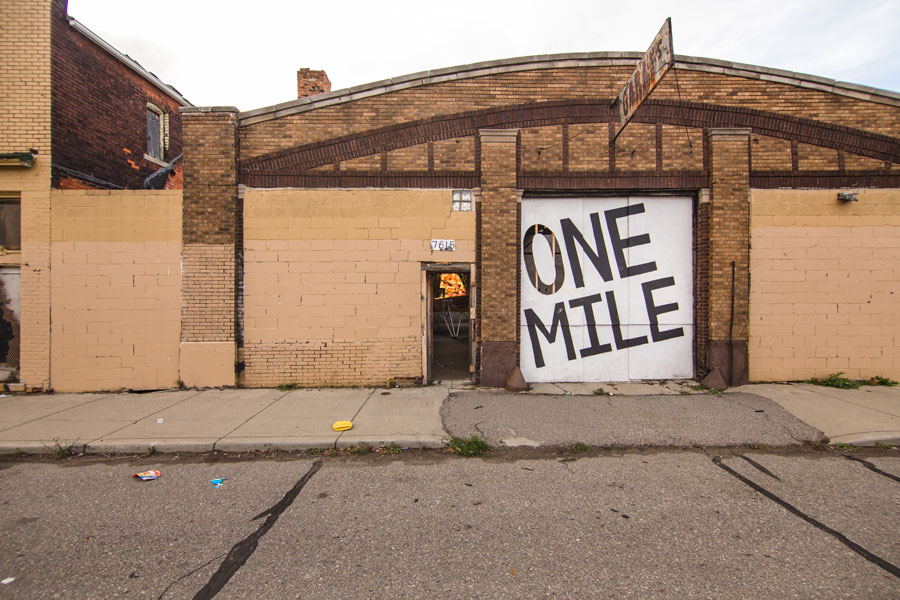 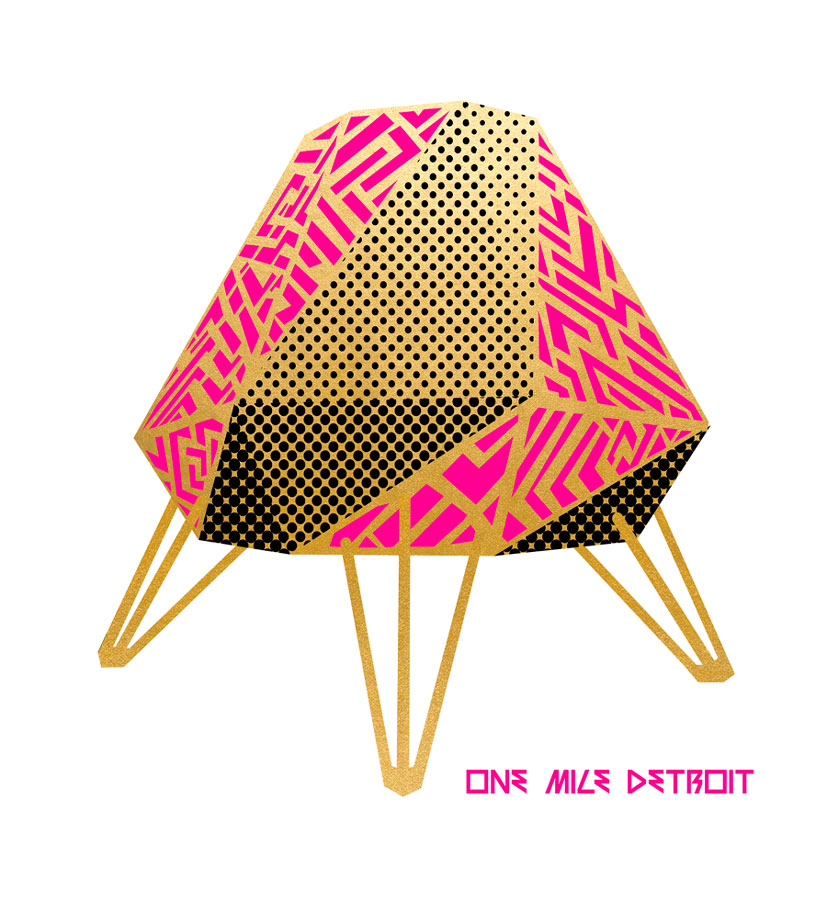 The Mothership is a self-initiated prototype for sustainable urban interventions in economically challenged contexts. By looking to local cultural production as a generative, enduring resource, the project reimagines design as an impactful social practice. 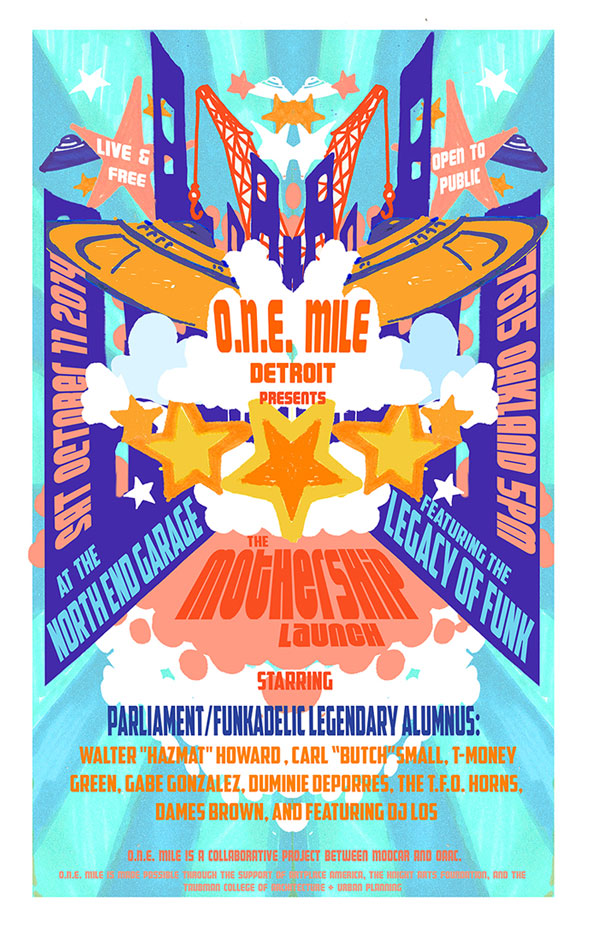 Akoaki designed and fabricated a P-Funk inspired Mothership to serve as a mobile DJ booth and broadcast module in Detroit’s epic North End neighborhood. Channeling the Afro-Futurist sensibility and playfulness of the legendary funk emblem, the Mothership marked the beginning of the O.N.E. Mile project, a collaborative urban scale initiative that stages year-round experimental cultural events. 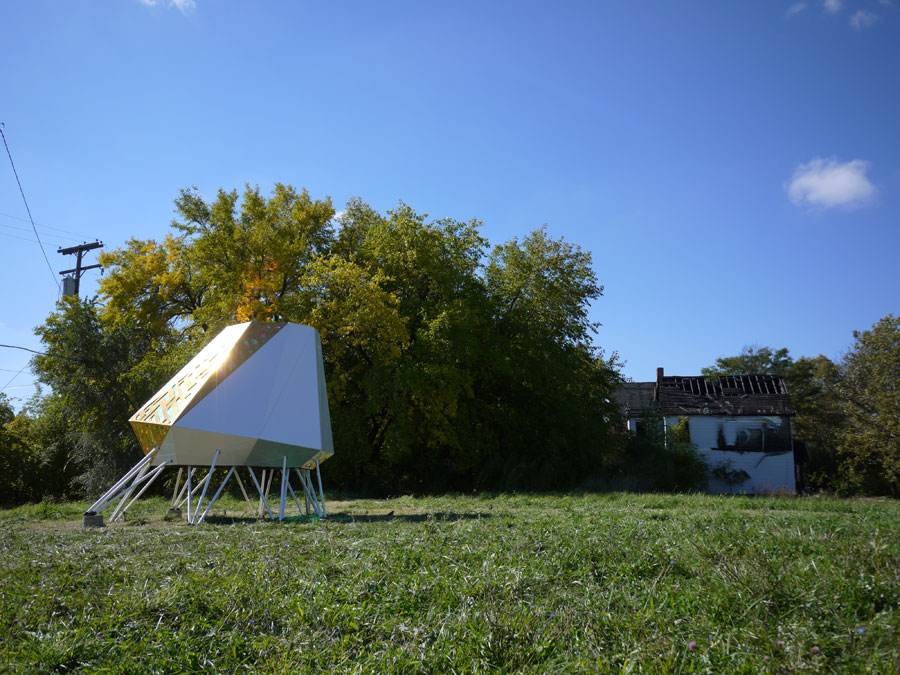 The architects conceived the Mothership as an easy-to-assemble, deployable unit that fastens together using a simple aluminum paneling system and bolts. Sixteen water jet cut panels that fit in a pick up truck attach to produce a self-structured polygonic shape secured to an interior platform. Steel tubing supports the vessel and floats the DJ staging area four feet above the party. 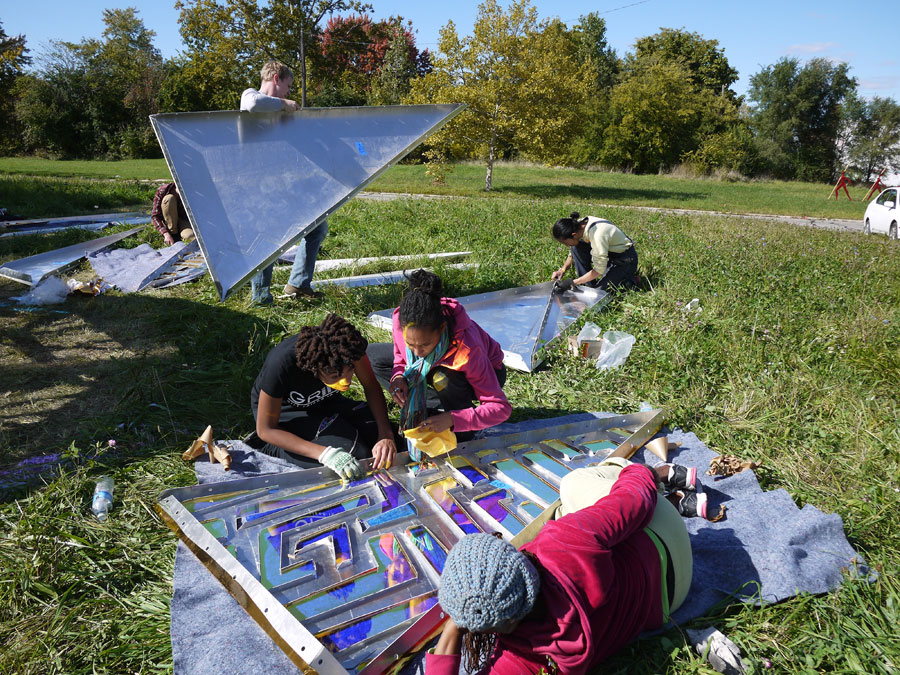 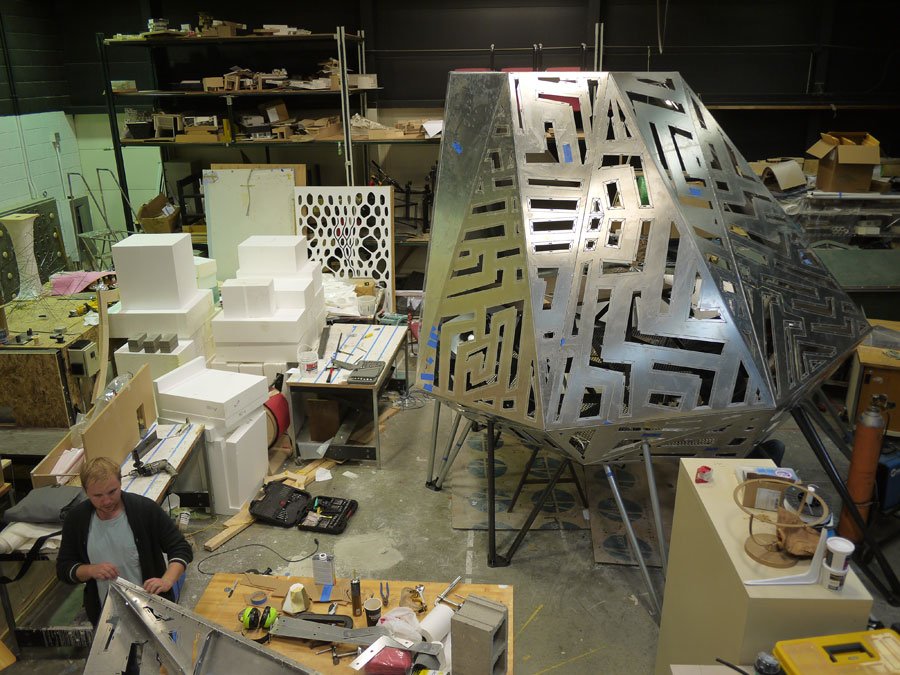 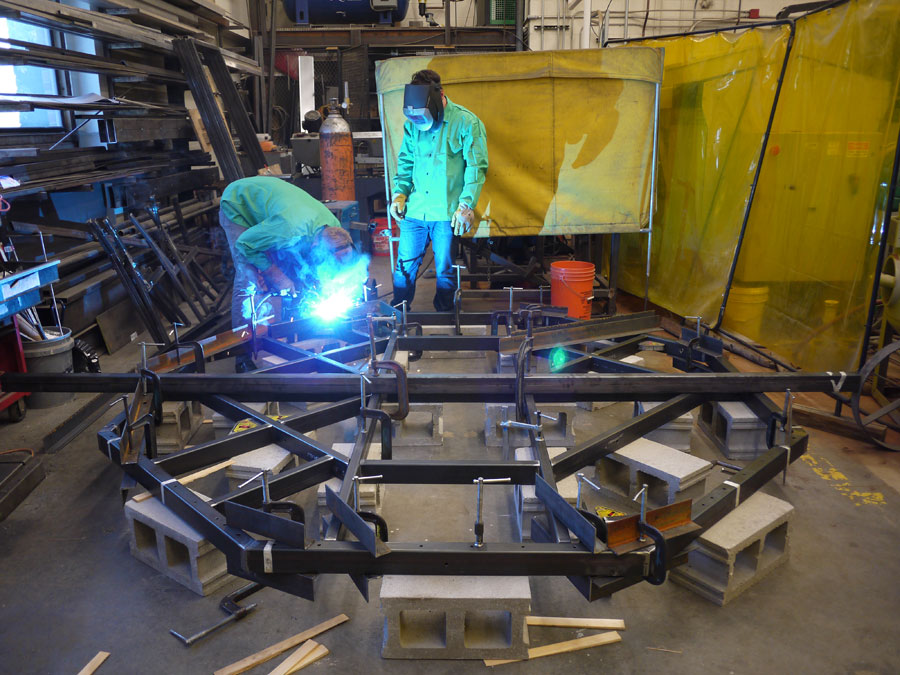 As an urban marker and cultural prototype, the project comes at an important time for the North End. As residents of Detroit know, blight removal across the city is proceeding at an accelerated clip. Unchecked, the broad renewal plan threatens to erase important historical vestiges that connect Detroit and its cultural innovations to a greater national legacy. The Mothership is a physical reminder – an icon that says important things happened in Detroit and its outlying neighborhoods. Rather than plaques, the module serves to signal that Funk music literally started here. 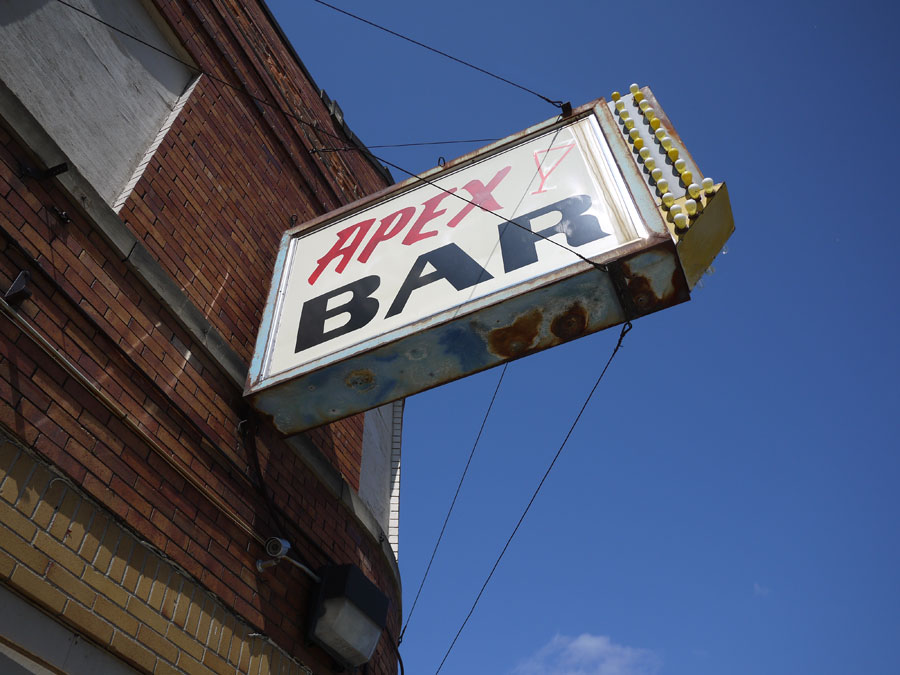 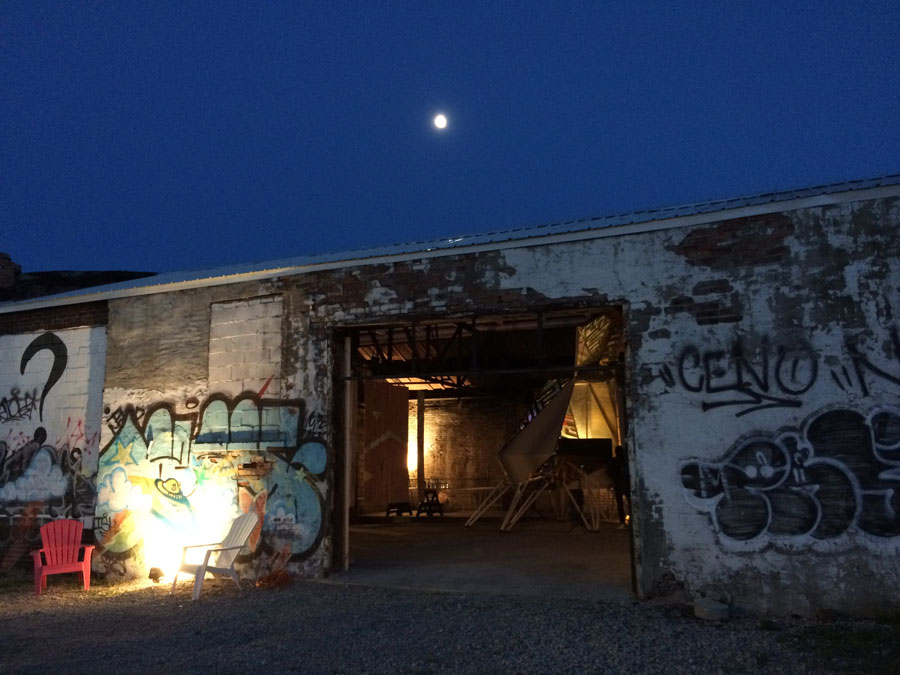 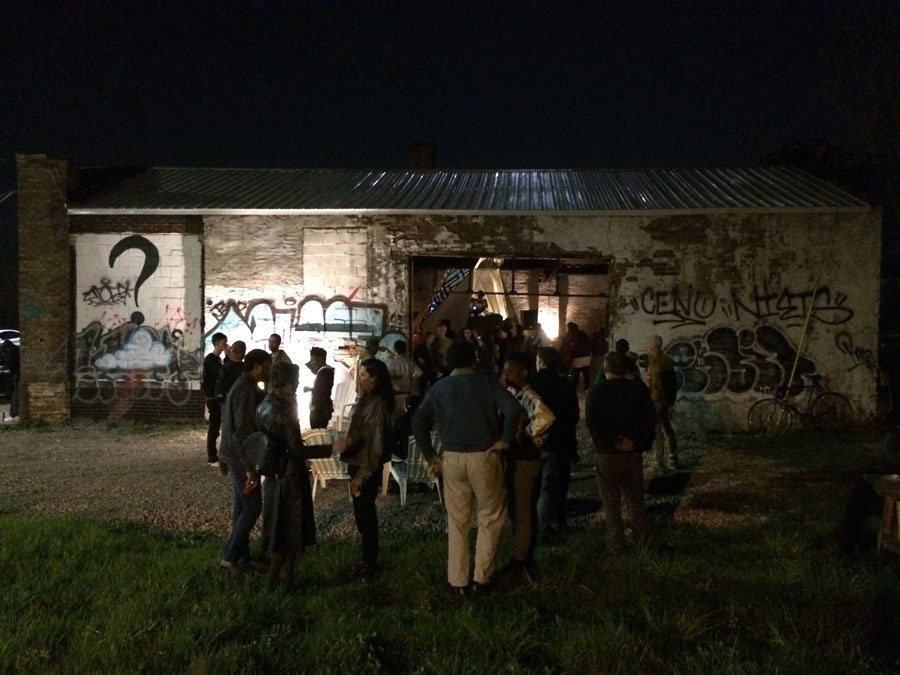 The Mothership made its debut during O.N.E. Mile’s free and unprecedented launch event in October 2014, when twelve former and continuing “family” members of Parliament-Funkadelic staged a special live performance in an unmarked garage on Oakland Avenue. The mobile unit is currently stationed there, but makes public appearances throughout the city. 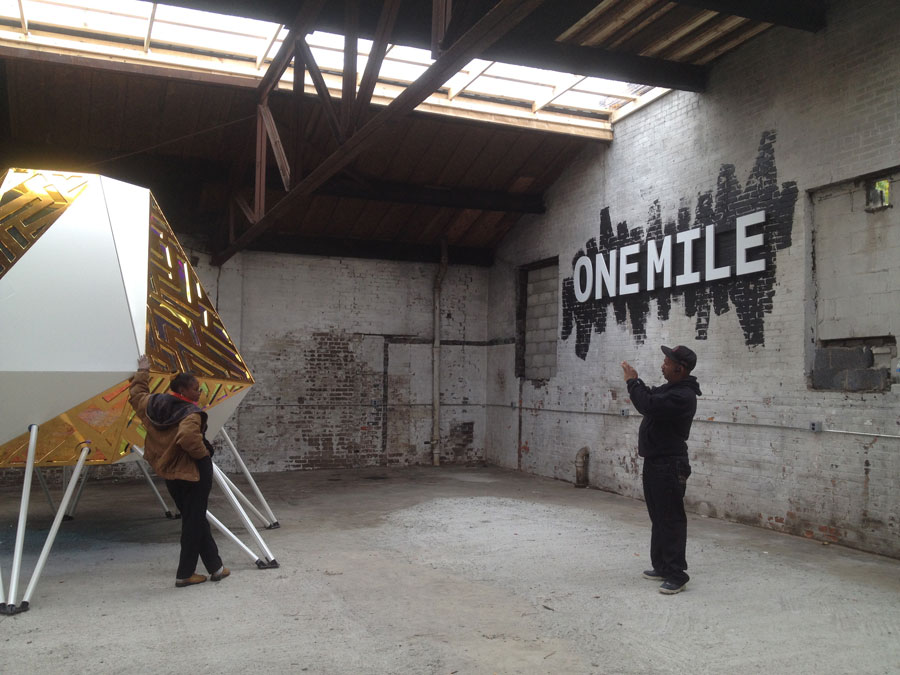 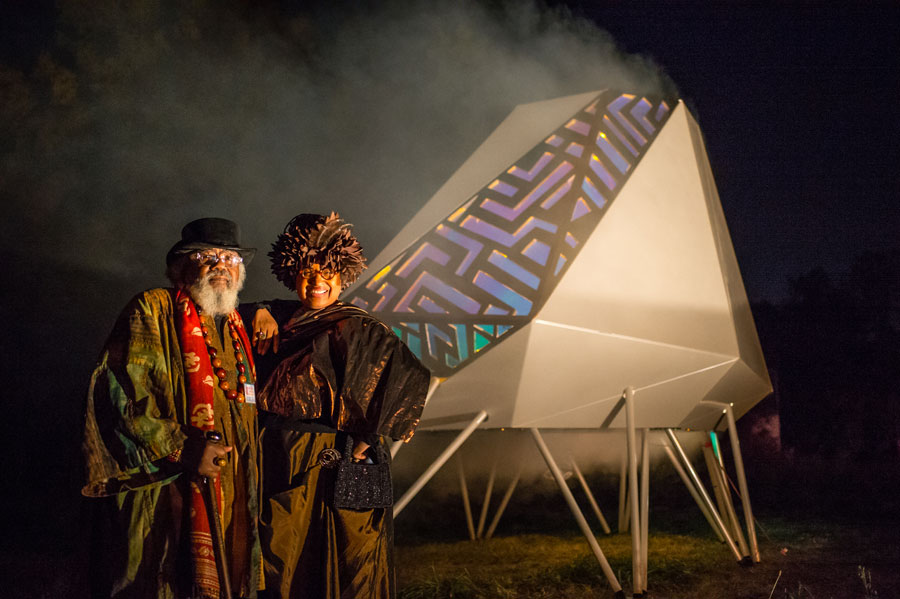 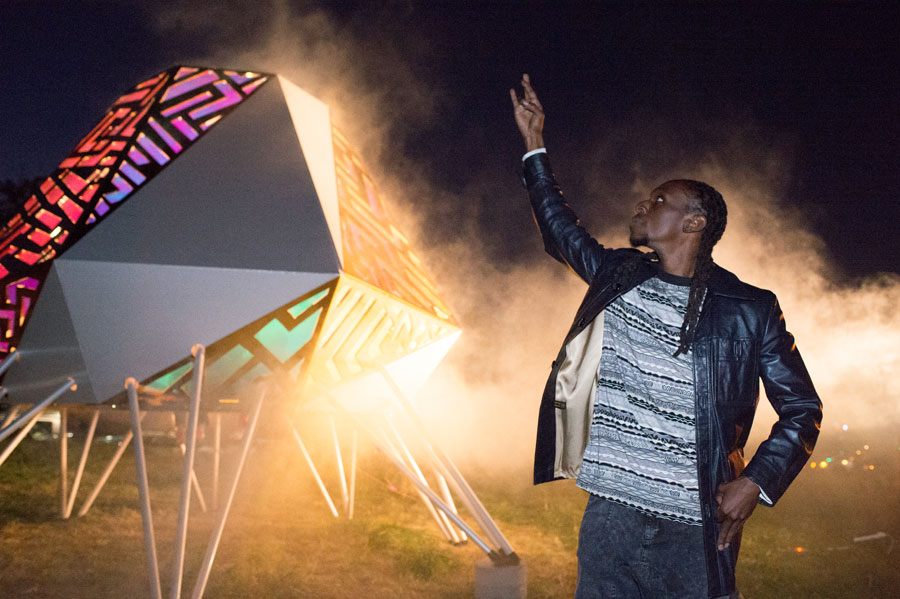 A broad network of artists, architects, activists, and residents created the self-initiated project as the first step in a series of temporary, mobile and experimental design interventions contributing to the Oakland North End Mile initiative, or O.N.E. Mile. With the support of the Knight Arts Foundation, ArtPlace America and Taubman College of Architecture + Urban Planning, O.N.E. Mile has brought together a unique interdisciplinary collective of people who care deeply about their neighborhood and city. Collaborative planning, cross-pollination of ideas, and consultation with the original members of Parliament Funkadelic have all contributed to the idiosyncratic visual and cultural quality of the project. 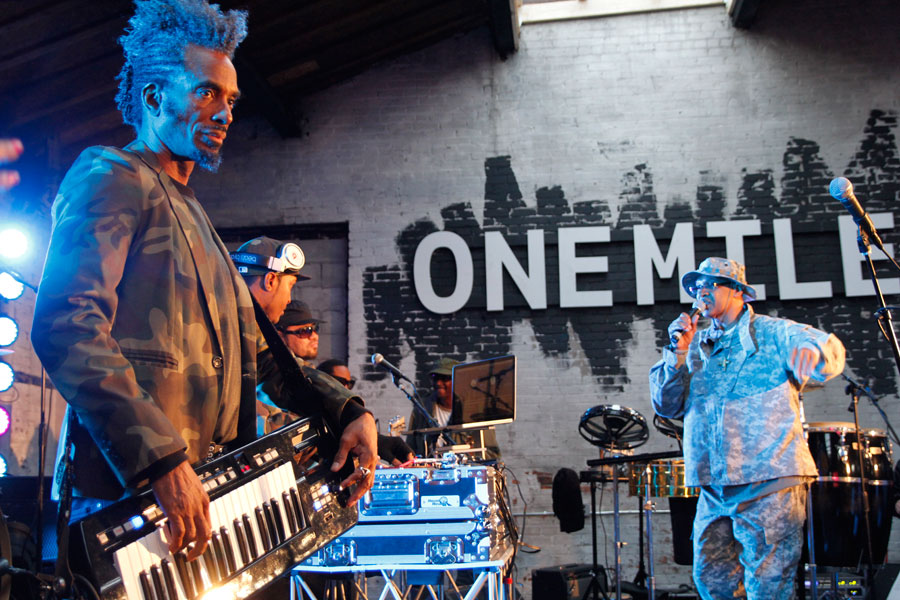 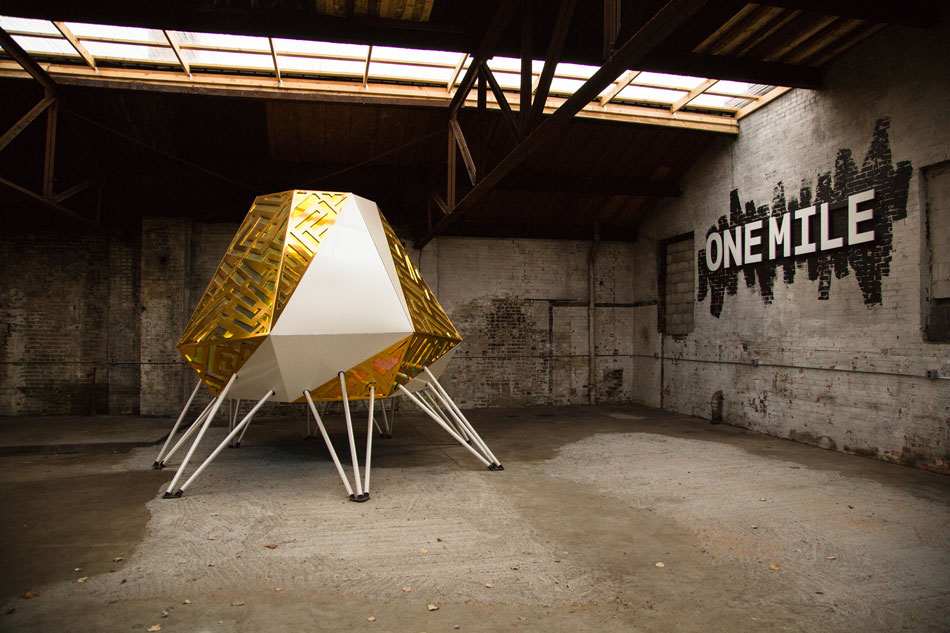 Selected by Eduardo Rega and Daniel Ruiz for urbanNext in November 2015, Detroit

« On Curatorial Approaches
On Broadcasting Detroit as an Asset »