TerraPerforma and On Site Robotics are projects of IAAC, Institute of Advanced Architecture Catalonia, developed within the Open Thesis Fabrication programs in 2016-2017. 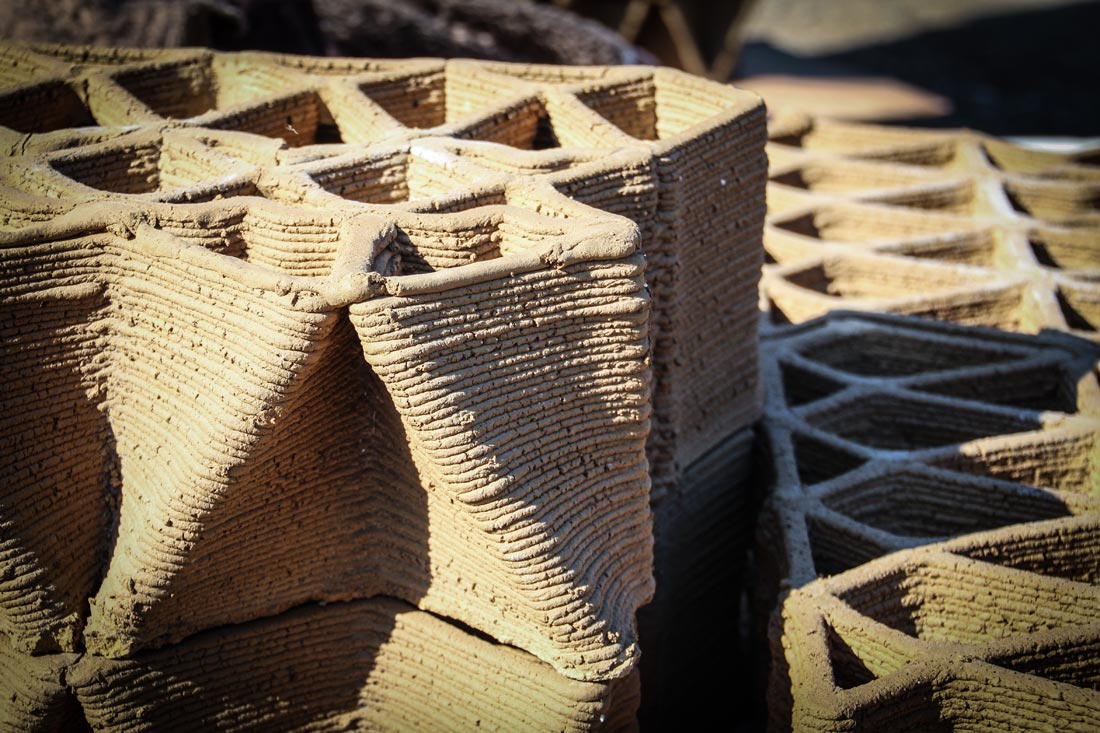 The project focuses on large-scale 3D printing, the influence of additive manufacturing on building with a traditional material – unfired clay – and climatic performative design.

Mud constructions are an ancestral technique, based on the use of local materials, with an ecological footprint close to zero. Mud is a material used worldwide, which provides significant winter heating and summer cooling due to its thermal inertia properties. Additionally, due to its ability to absorb and evaporate, clay offers a self-regulating humidity environment, promoting a healthy indoor climate. However, while clay has been used in vernacular architecture for thousands of years, today it faces the stigma of being associated with only traditional or underdeveloped areas. However, by pairing the material with contemporary technology, the aim of the project was to develop a prototype that would posit clay as a plausible construction material for any type of architecture, relevant to the developing architectural field. 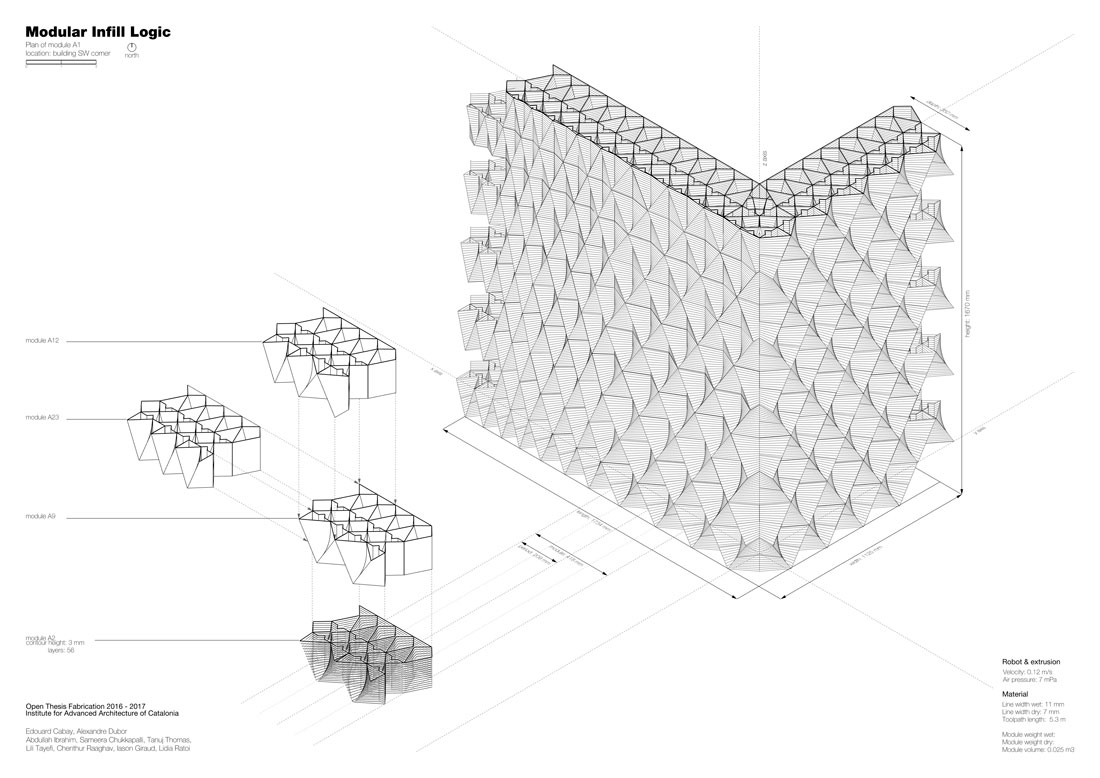 The project combines three variations of 3D printing: robotic fabrication, on-site printing, and printing with clay, examples of which were studied during the developing the TerraPerforma Project.

While 3D printing has allowed for the possibility of creating complex geometries, the intelligence of the design comes from the optimization strategies, as the creation of performative shapes is easier to achieve. 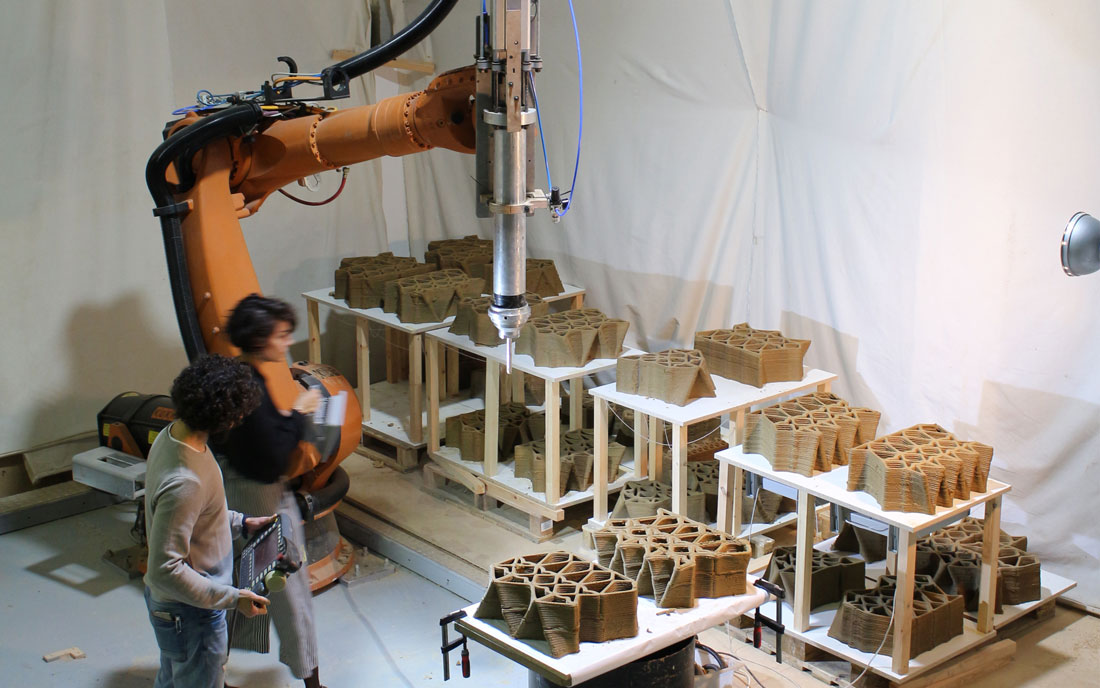 During TerraPerforma, a series of tests were carried out that explored the possibility of optimizing design according to different performance parameters. The development of the project started by researching climatic phenomena and material behavior. Then a series of physical tests and digital simulations were carried out for prototypes of walls testing solar radiation, daylight, thermal conductivity, thermal convection, thermal mass and structural behavior. Software such as RHINO CFD, Ladybug, Karamba was used in order to simulate wind, sun and structural behavior. The team also developed a series of machines, such as the hygrothermal monitoring apparatus and the load machine in order to further develop their studies, as well as doing a light visualization exercise by recreating the sun’s path with the help of the robot. 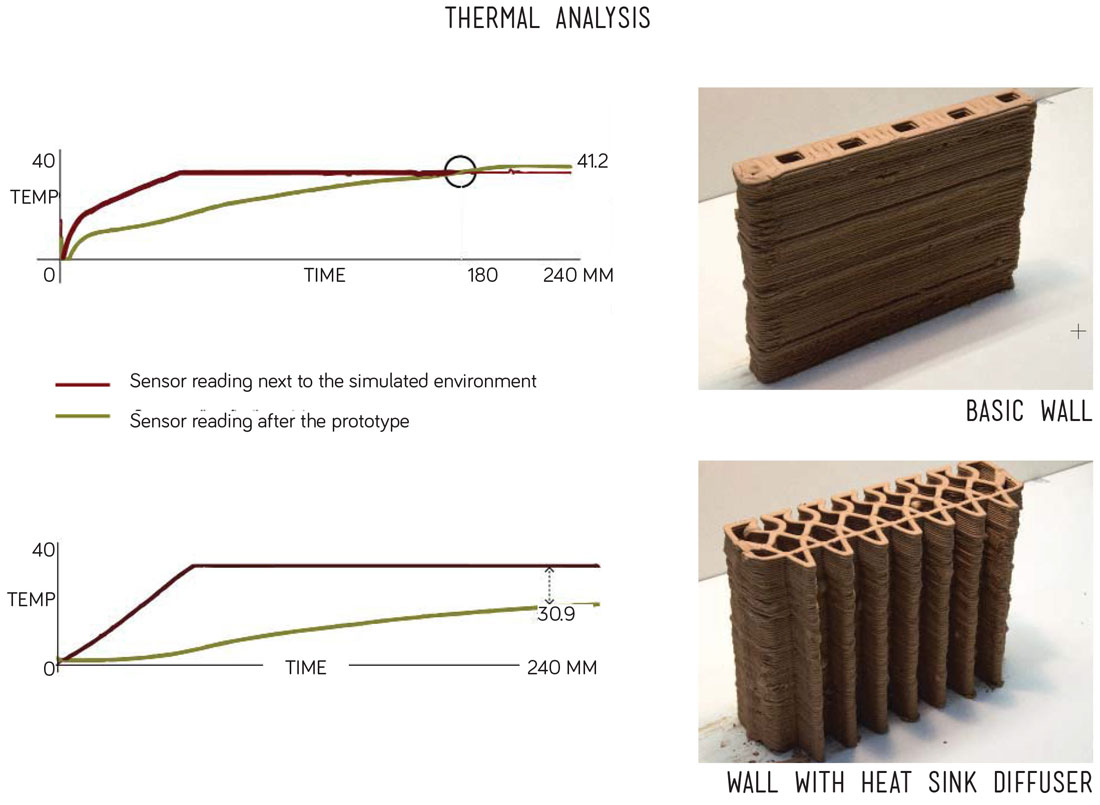 The team also had the opportunity to work within Tecnalia, experimenting with the CoGiro robot, a cable-driven parallel robot (CDPR) owned by Tecnalia and LIRMM-CNRS. Its original point of design resides in the way the cables are connected to the frame, called the configuration of the CDPR, which makes it a very stable design. As a result, the team was able to manufacture the biggest monolithic piece derived from the research.

For the final prototype of the TerraPerforma project, it was concluded that a modular approach would be best, mainly due to the difficulties of bringing a robot outdoors to face hard climatic conditions. The modules are parametrically conceived for optimum performance according to solar radiation, wind behavior and structural 3D printing, both individually and within the design as a whole. The façade was conceived as a gradient in both the horizontal and vertical directions, with various radiuses of self-shading to optimize sunlight from the east and west. Additionally, the modules are designed to incorporate various types of openings in order to maximize the natural daylight potential; the openings are strategically placed and vary from micro openings to full-openings between bricks as light channels. The same channels are also designed to aid ventilation through convection properties, along with the placement of microperforations to direct air flow.

On-Site Robotics is a collaborative project by IAAC and TECNALIA, which demonstrates the potentials of additive manufacturing technology and robotics in the production of sustainable low-cost buildings that can be built on site with 100% natural materials. Combining technological advances in robotics (cable robots and drones), natural materials and CAD/CAM software, the aim of the project is to bring automation to the construction site, as well as allowing the production of high-performance buildings and their monitoring in real time during the construction. 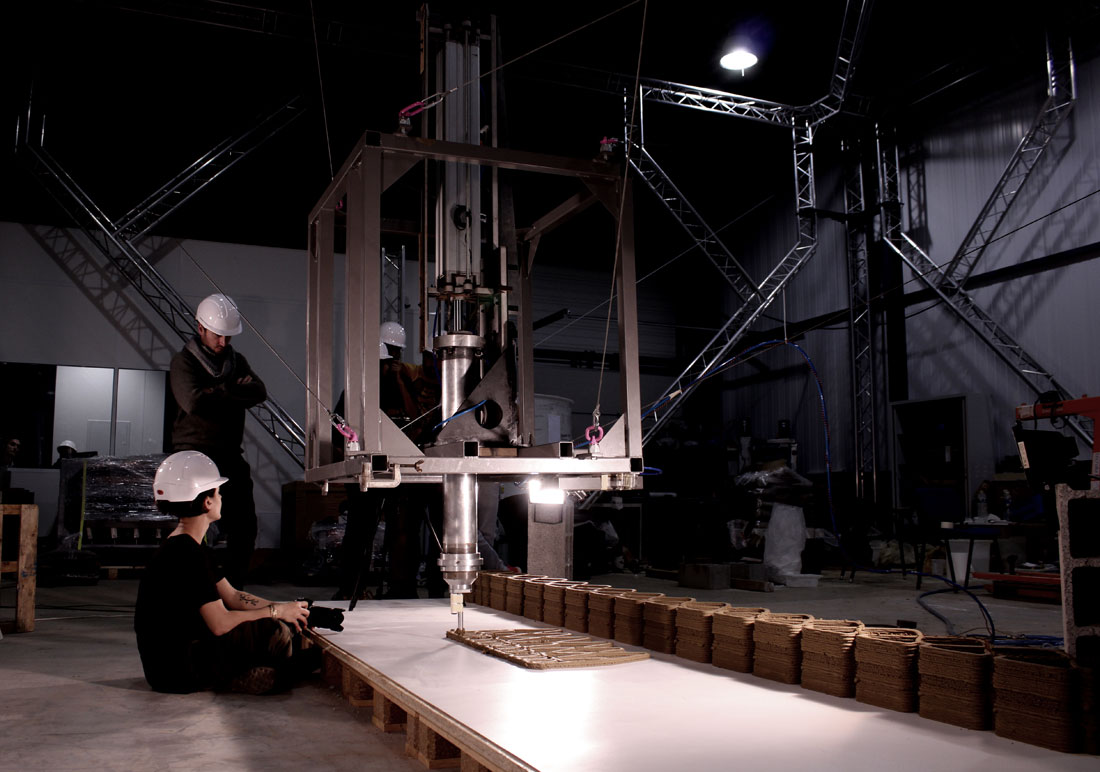 The 3D printing system presented in On-Site Robotics, is introduced to 3D print large-scale construction parts, and even small-scale buildings, made from 100% natural materials. This system includes the cable robot Cogiro with an integrated CNC control, which is able to automate the movement of the 3D extruder with precision.

Thanks to the use of cables operated by servo-controlled winches with easy assembly, maintenance and reconfiguration, the printing can happen in a very wide range of workspaces and even directly on the construction site.

In addition, the On-Site Robotics scenario integrates the use of drones programmed to fly autonomously. Its objective is to participate in the workflow, monitoring the development through multispectral cameras, which, thanks to computational processes, offer thermal information on the drying state of the structure.

This information is necessary to control the printing process, avoiding the superimposition of new layers of material on a still fresh and unstable base. 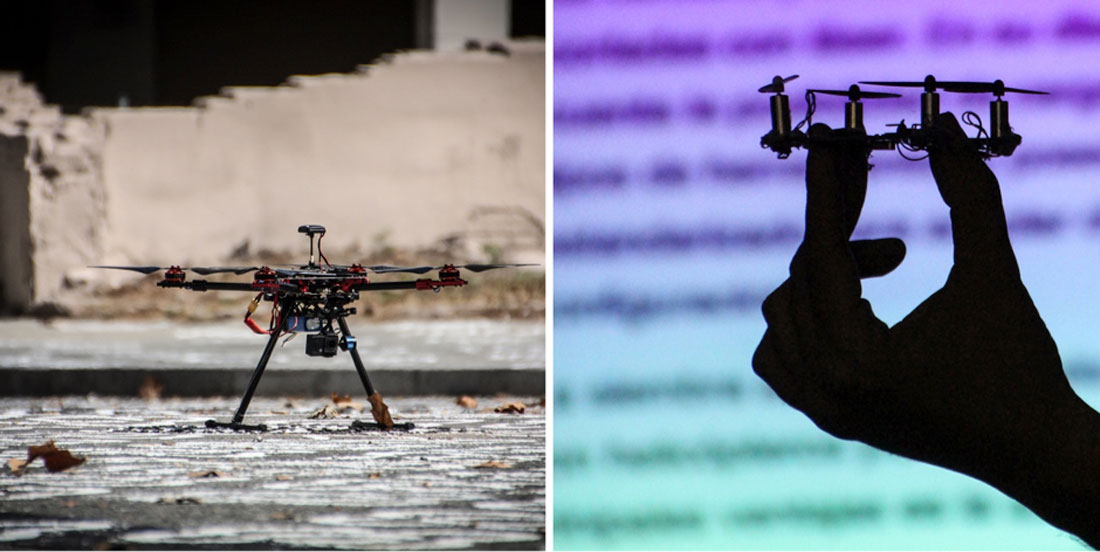 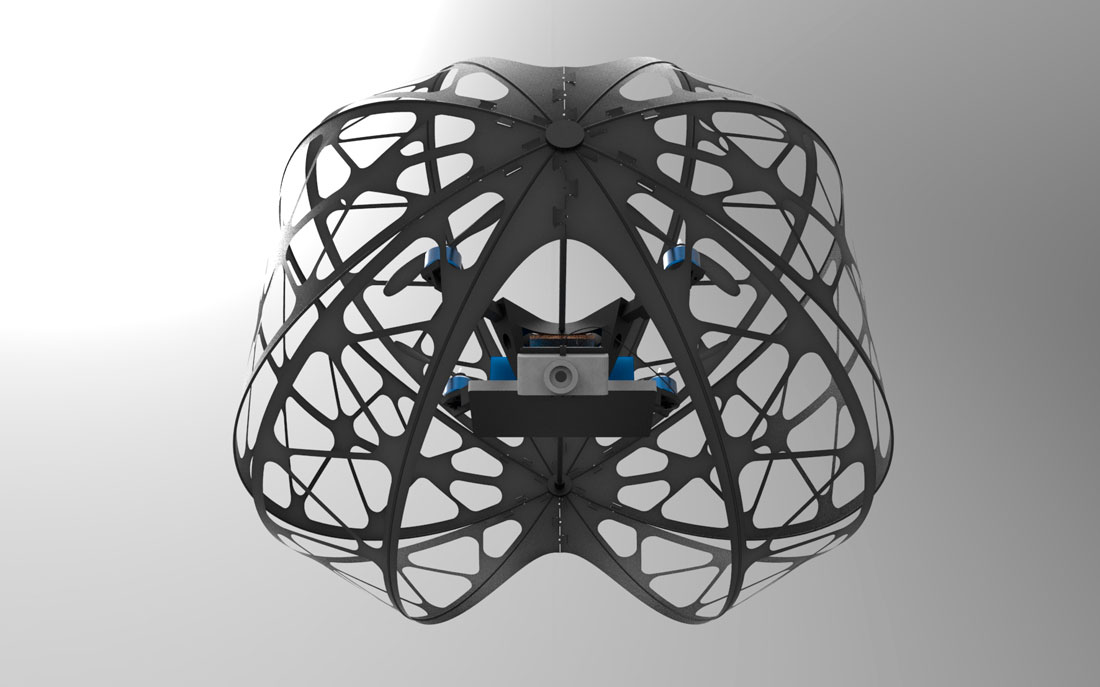 The construction sector, which has traditionally been slow in integrating technology, is now opening up to digital manufacturing, 3D printing, and robotics. The possibility of printing anything that has been previously modeled on a computer lays the groundwork for a true change in the conception of architectural production and in the possibilities of personalizing the final product.

The possible futures that open up thanks to this technology are many: from the printing materials and the design of shapes to the conception and production of the printing machines themselves. CAD software used by architects and used for 3D printing allows for the design of complex geometries, with the possibility of optimizing shapes, material distributions, and building behavior, as well as manufacturing in a quick and accurate way. 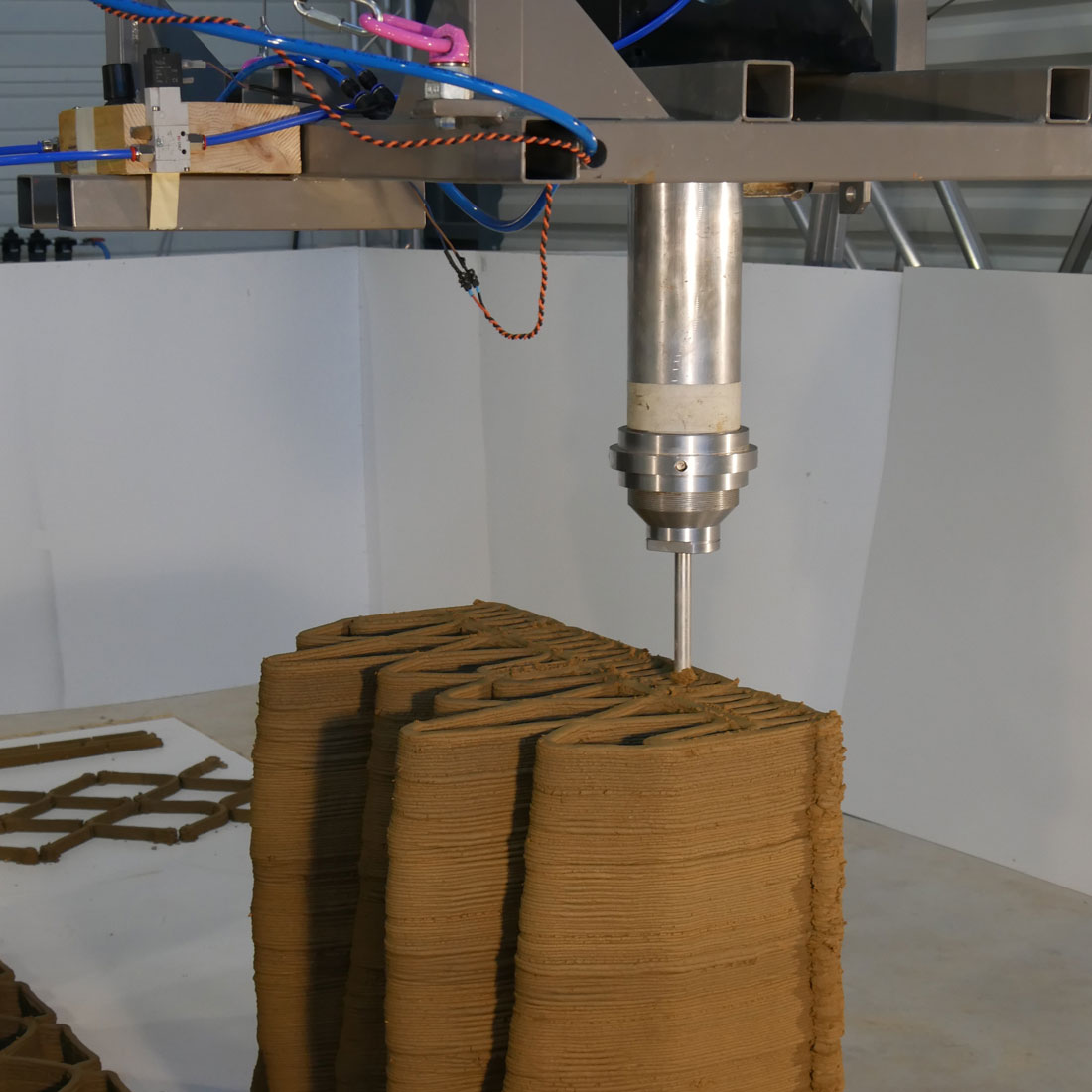 The tendency of 3D printing to print ever-larger pieces involves the use of machines or robots capable of accessing the construction site or large workspaces at accessible costs and with enough precision to guarantee the accuracy of the parts to be manufactured.

The main advantages of using cable-driven robots for 3D printing in construction include: having six degrees of freedom, being easily installable with simple foundations, requiring low maintenance, having a high ratio of useful space to used space, and having a cost that is non-dependent on the size of the installation. 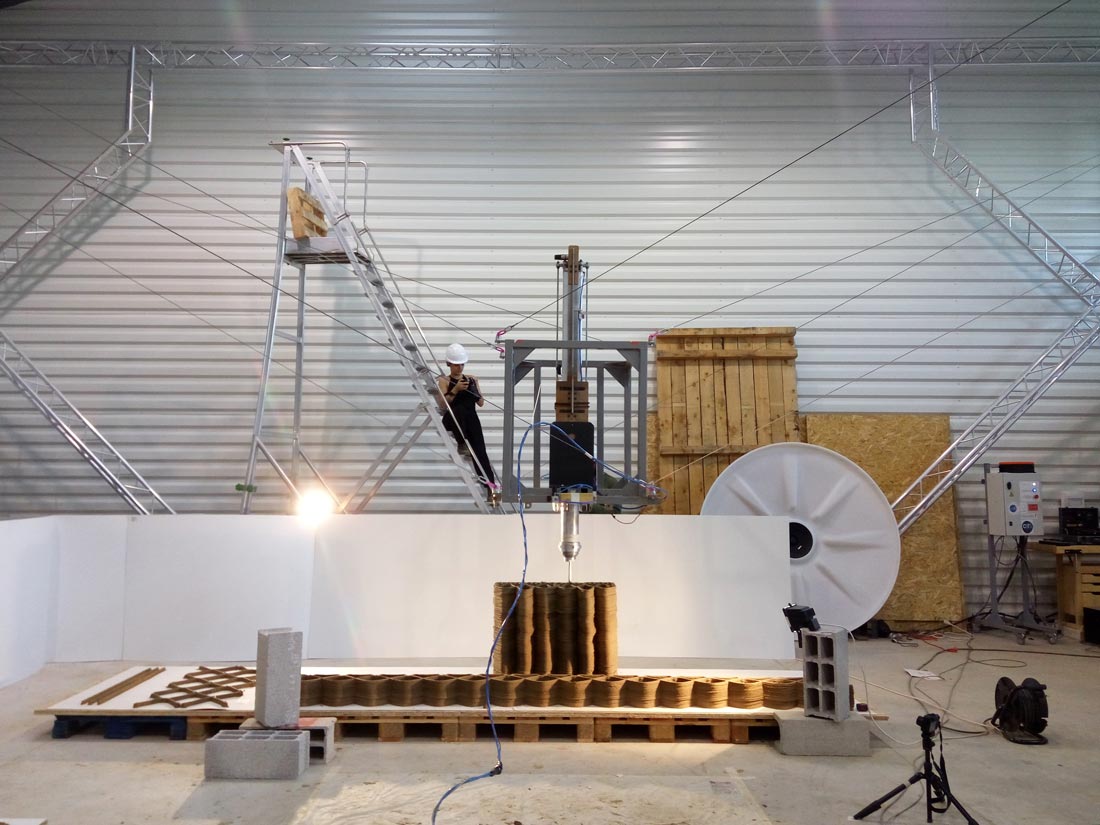 Additionally, the process of 3D printing on site requires a continuous monitoring of the state of the deposited material, the three-dimensional structure, as well as the environmental conditions that might influence its behavior. The aerial robots used on the construction site open up new possibilities for real-time monitoring and direct communication between machines, people and built products.

The system developed in On-Site Robotics aims to revolutionize the construction sector, reducing production costs and offering the inviting possibility of customizing the final product, which can be built on site or close to the construction site. 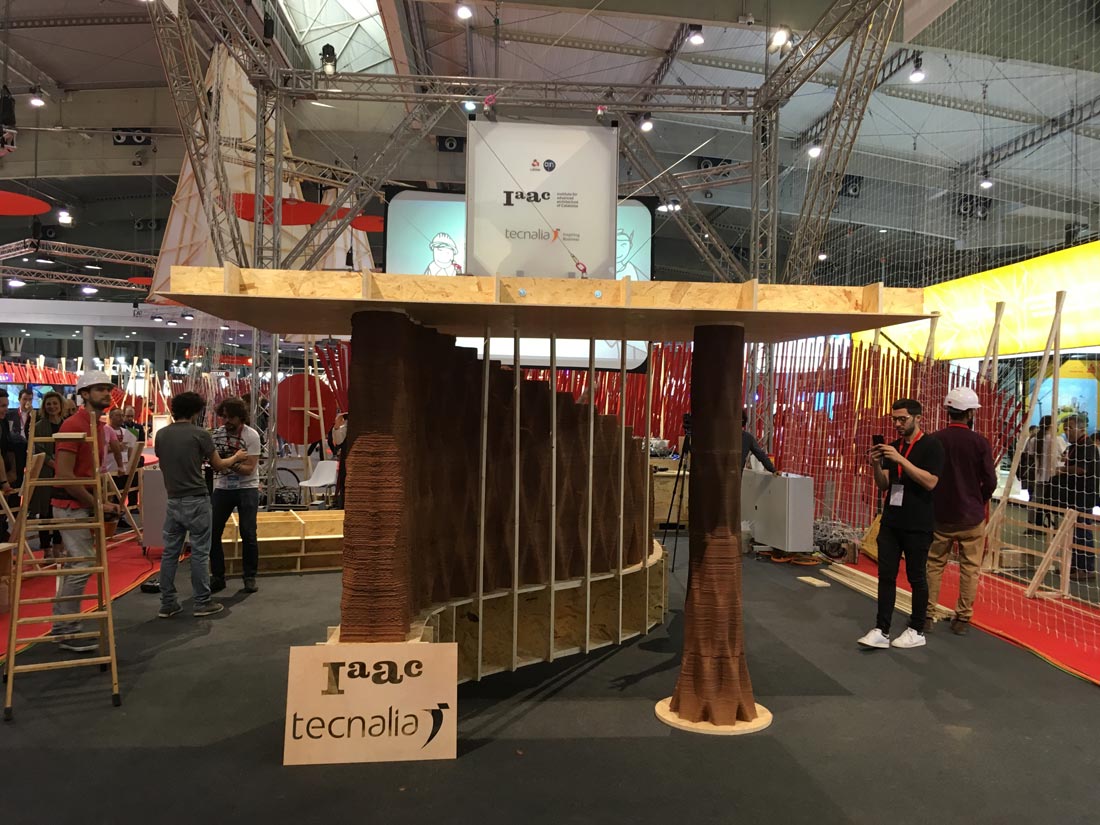 So far, an extruder for clay material has been developed and, in the near future, an extruder for cementitious material will also be available. Thanks to this system, the automatic 3D printing of large architectural elements and small buildings is close to being a reality.