Much has been achieved over the past two decades to transform the Sydney Park site from its former post-industrial history and waste disposal into 44 hectares of parkland and a vital asset for the growing communities of Sydney’s southern suburbs. 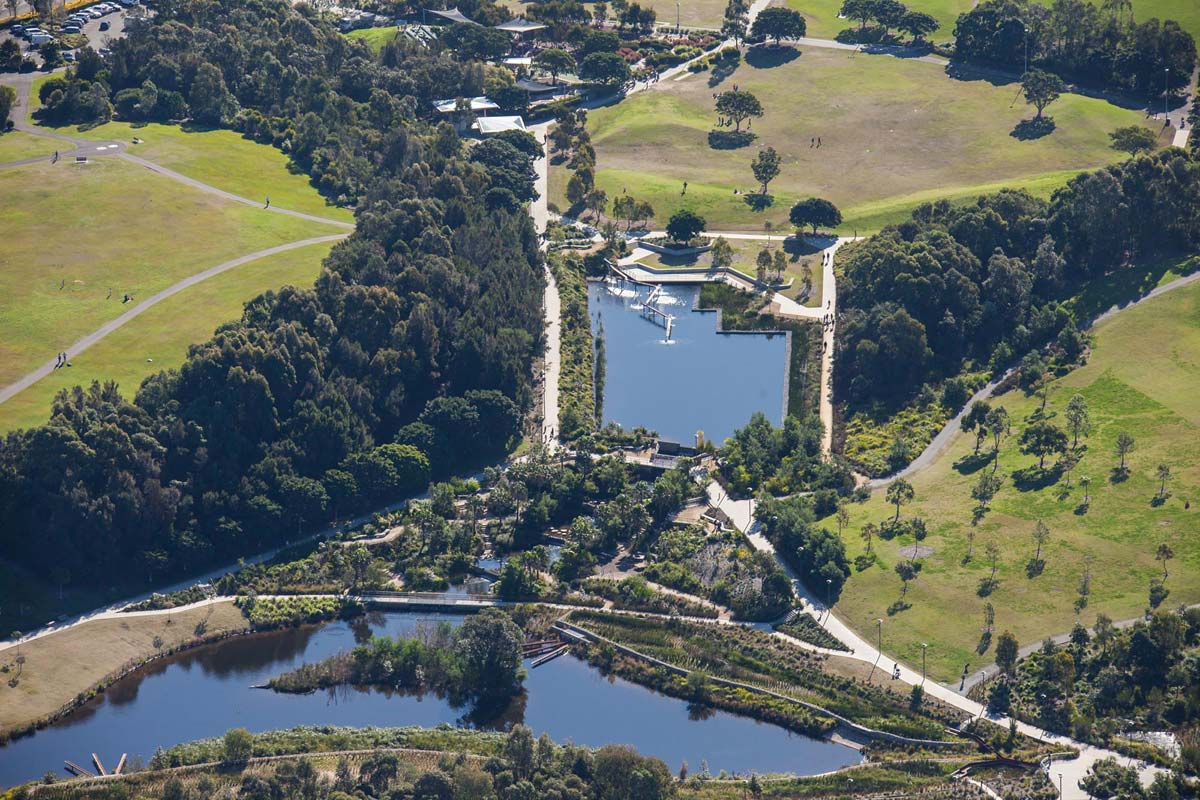 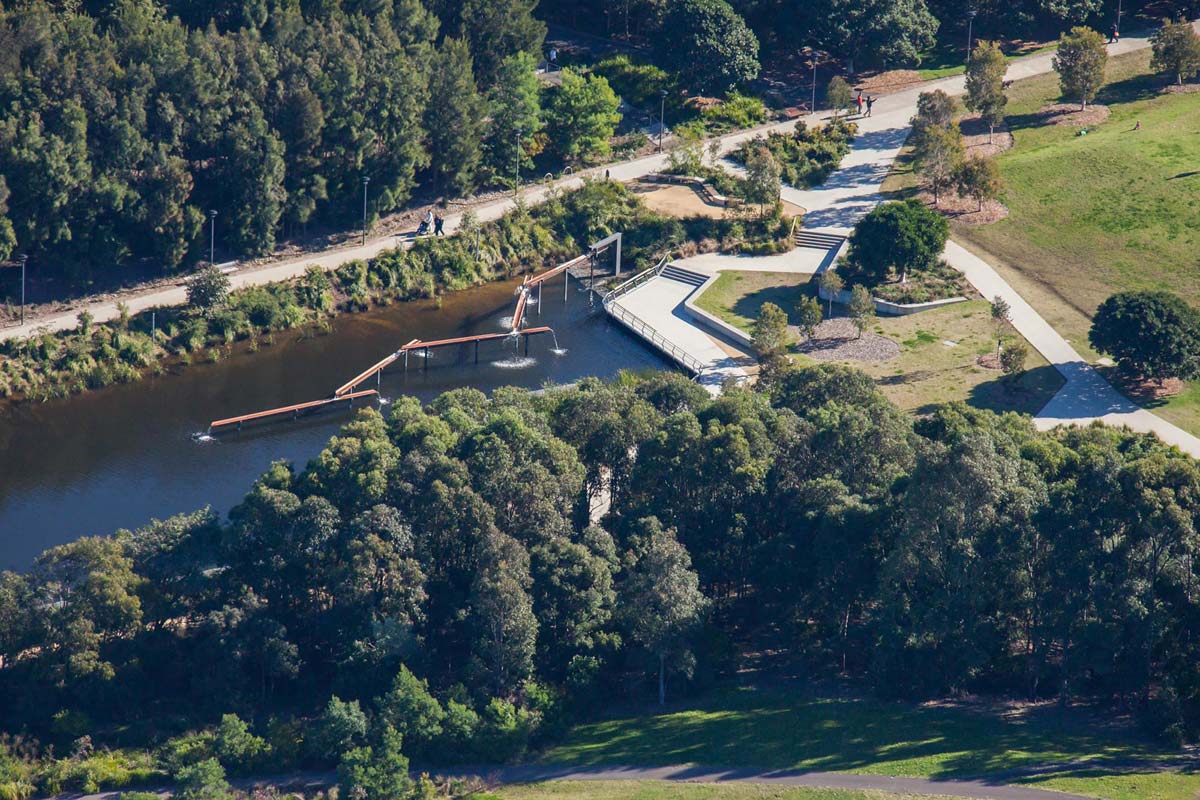 This project forms the City of Sydney’s largest environmental project to date, built in partnership with the Australian government through the National Urban Water and Desalination Plan. It is an integral component of Sustainable Sydney 2030, targeting 10% of water demand to be met through local water capture and reuse in the park. The City also seized the once-in-a-lifetime opportunity to use what was essentially an infrastructure project to breathe new life into the park – as a vibrant recreation and environmental asset for Sydney. 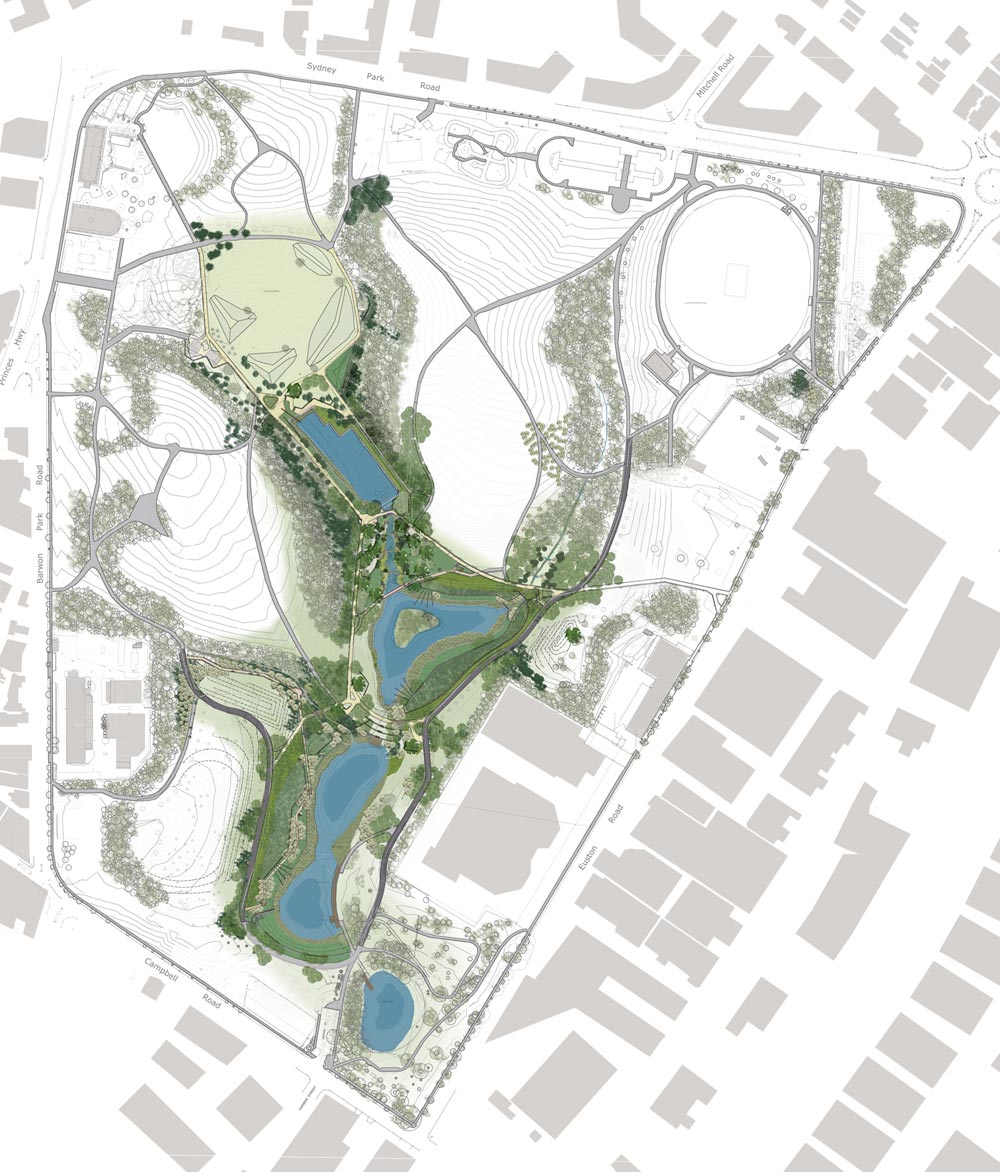 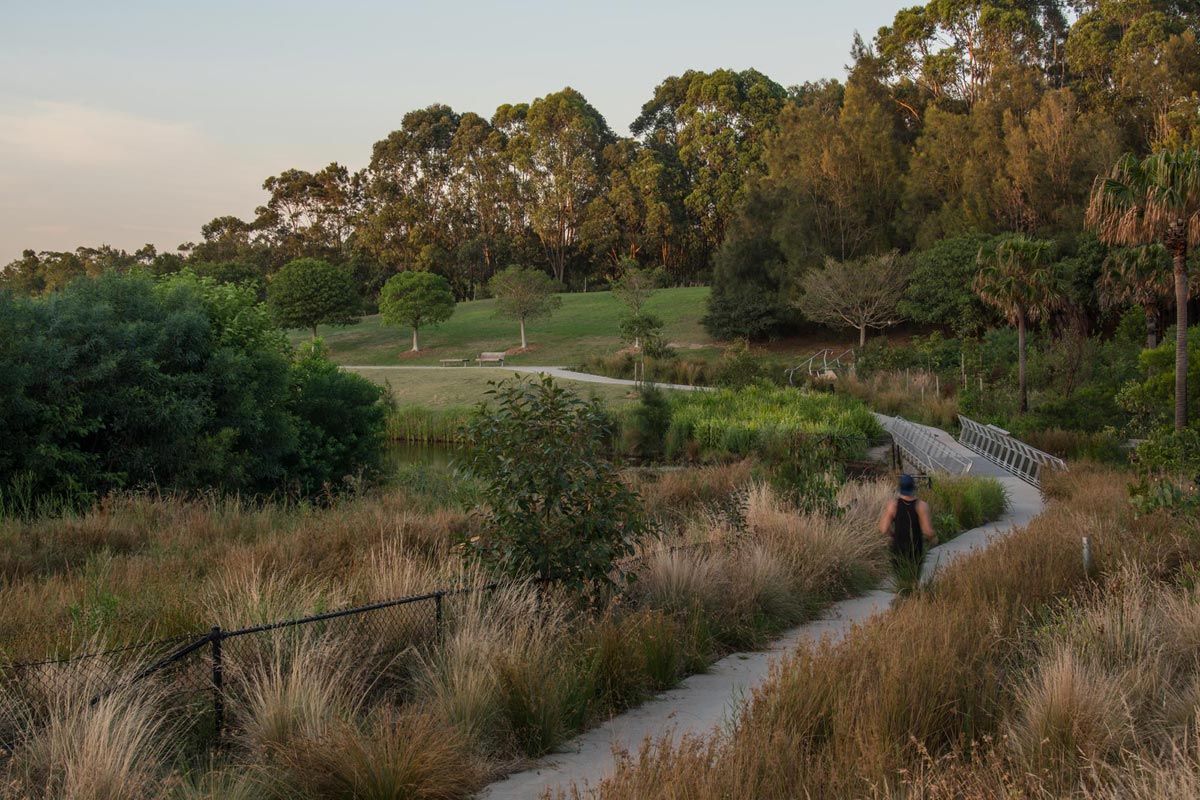 The result is an interwoven series of community infrastructures and ‘made’ systems – water reuse, recreation, biodiversity and habitat – all integrated within the physical fabric of Sydney Park. 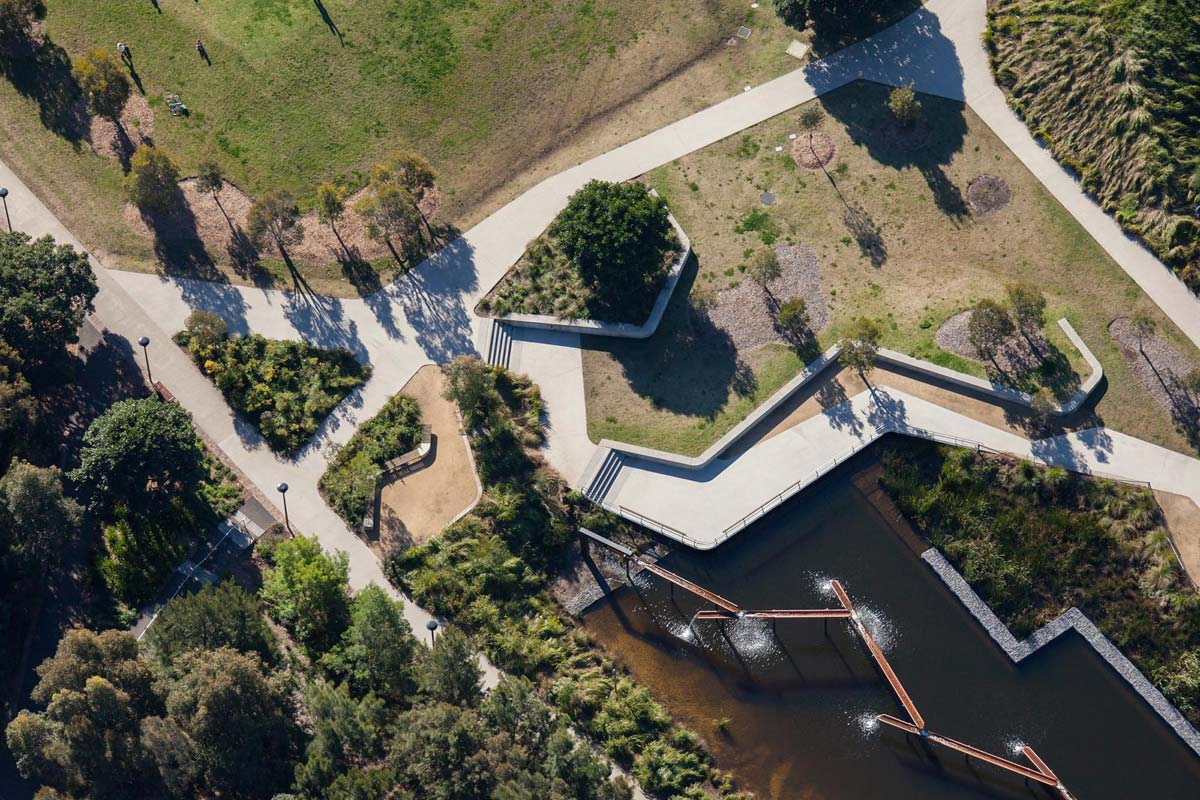 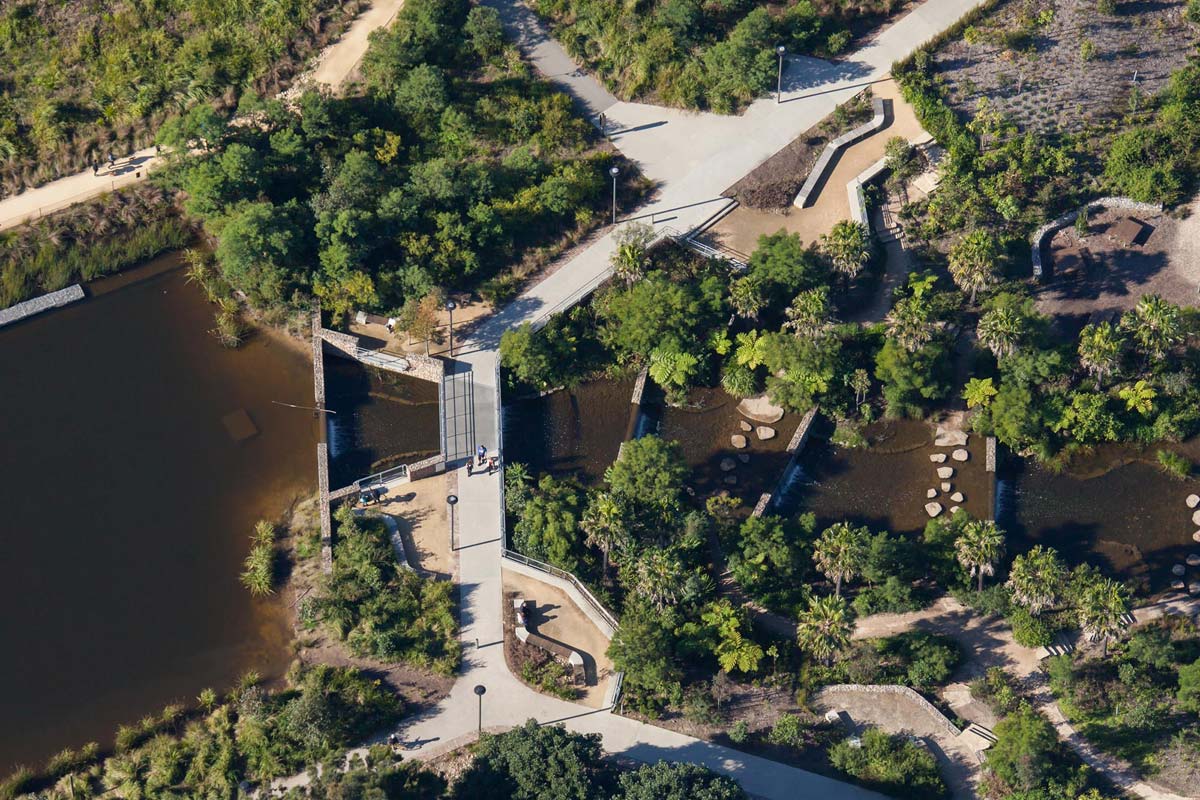 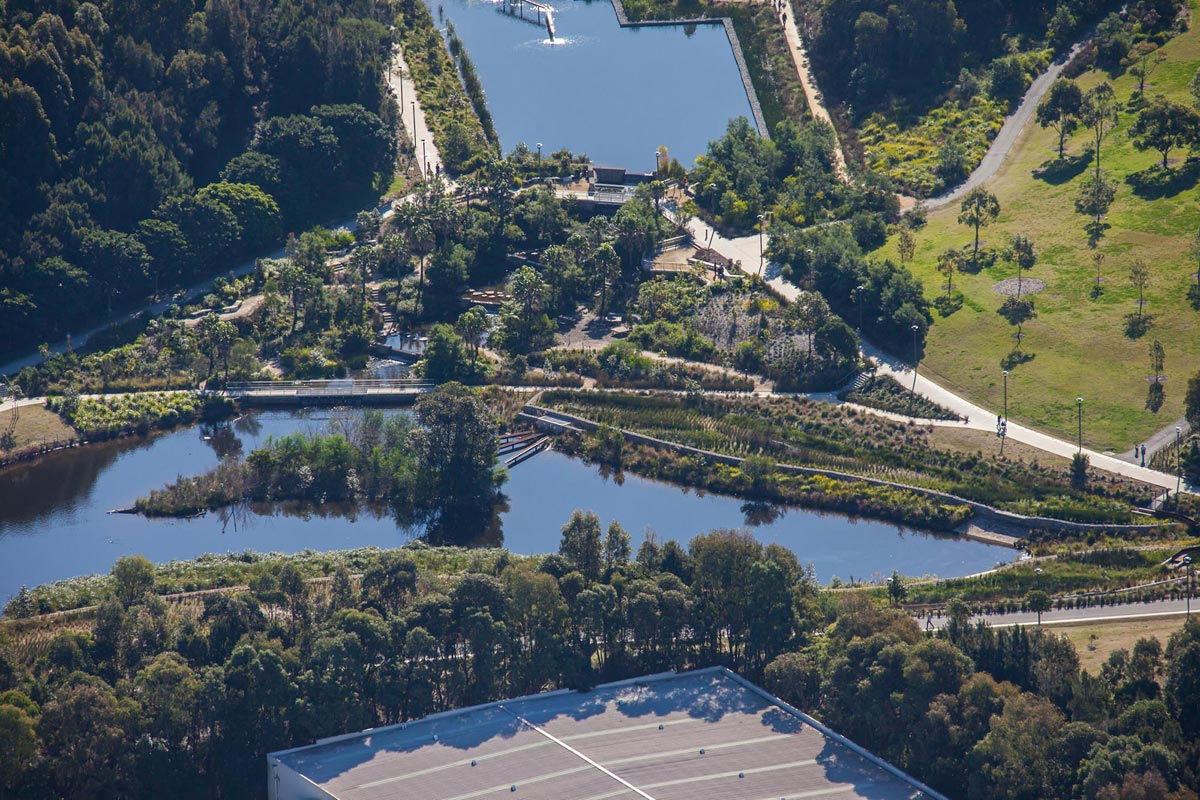 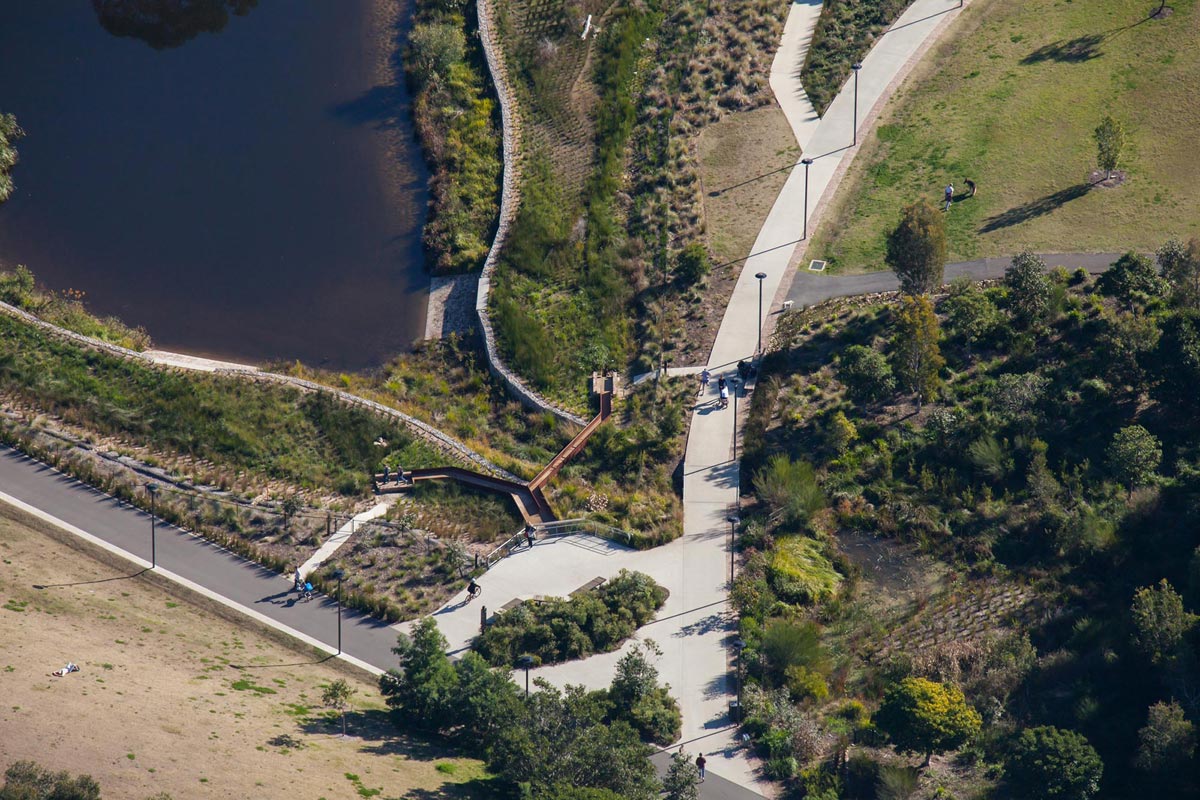 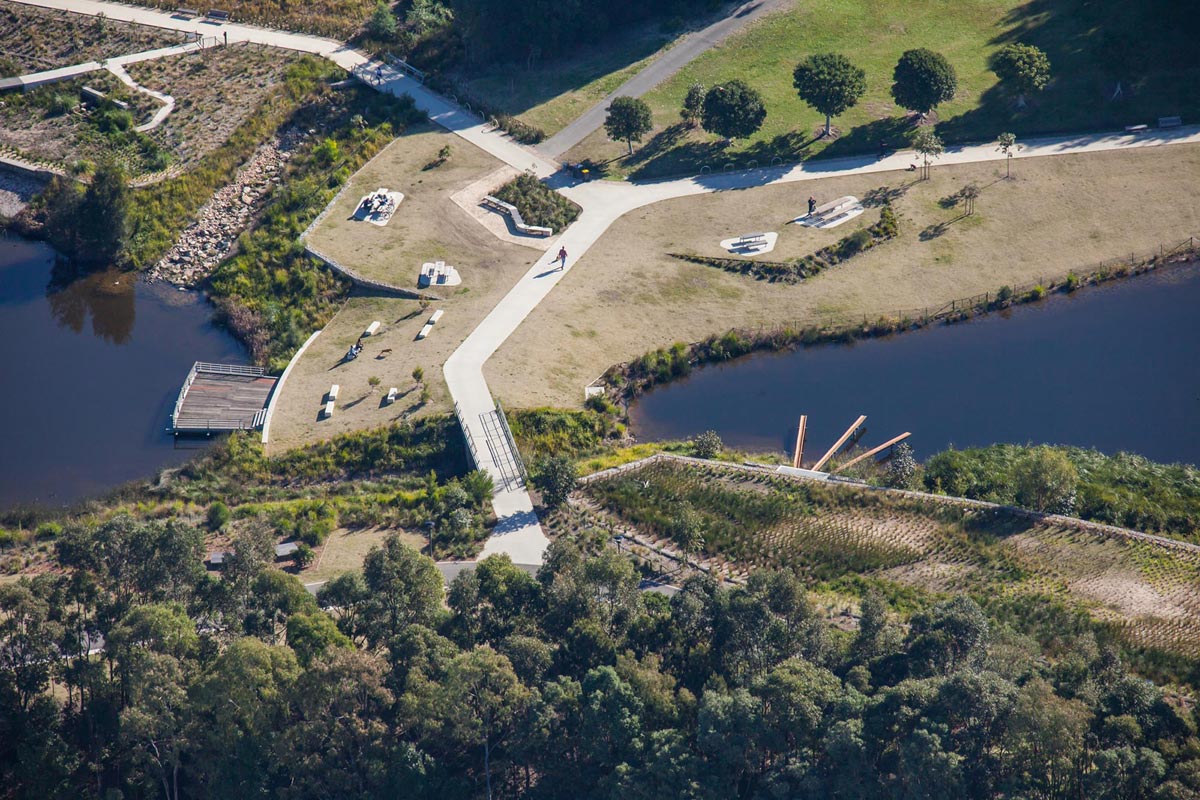 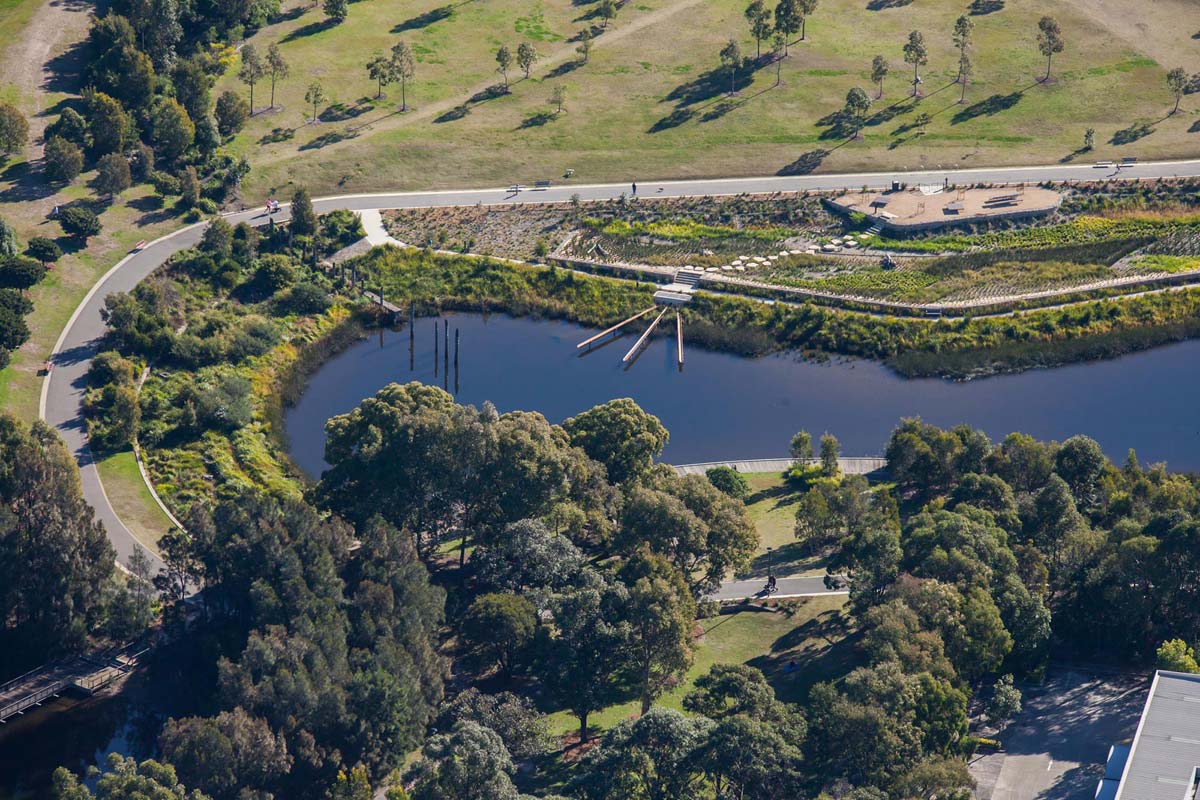 Sydney Park now offers an enhanced recreational experience to the Sydney community, going beyond the picturesque and creating instead a revitalised, multi-faceted waterscape that celebrates the connection between people and place.

After an intensive process of ‘easing in’, the water reuse project is now fully operational and intrinsically linked with its park setting. The bioretention wetlands not only capture and clean the equivalent measure of 340 Olympic-sized swimming pools per annum, they also successfully improve local water quality and habitat and reduce potable water consumption in the area. The park’s fauna and flora is thriving, with new habitats created, and existing ones protected and enhanced throughout the park. 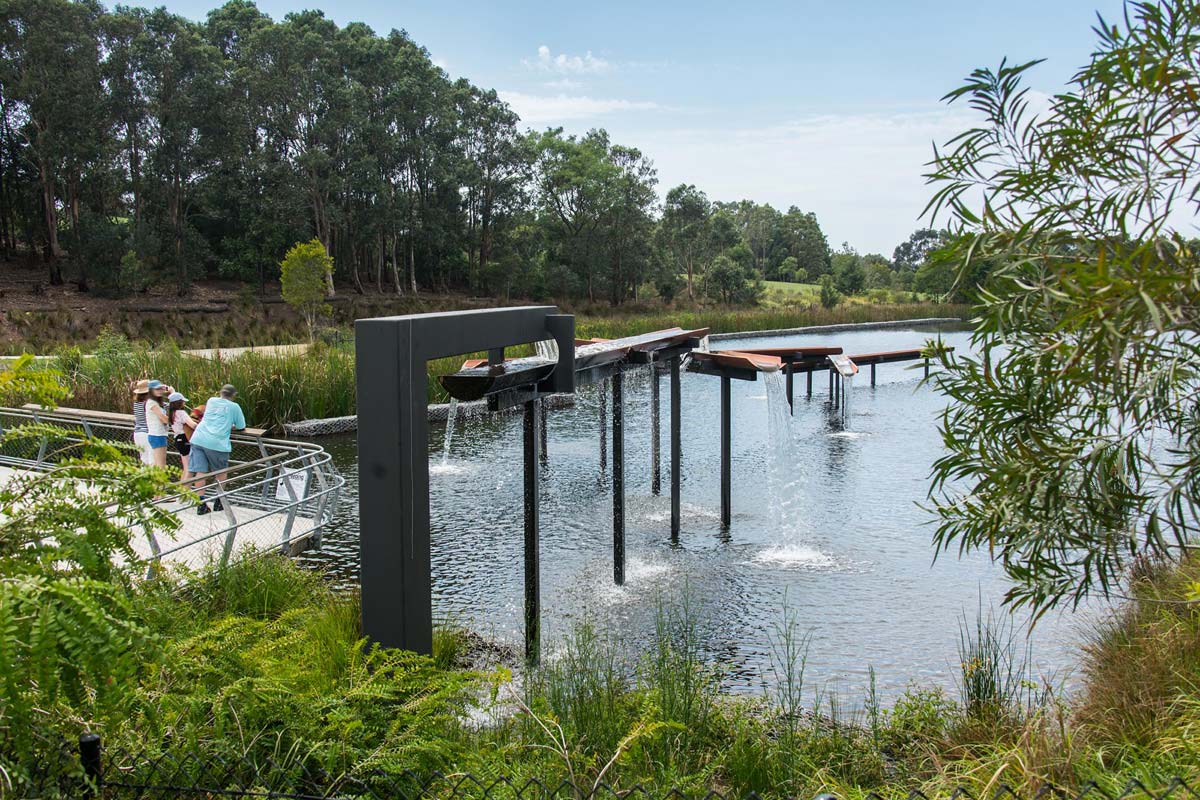 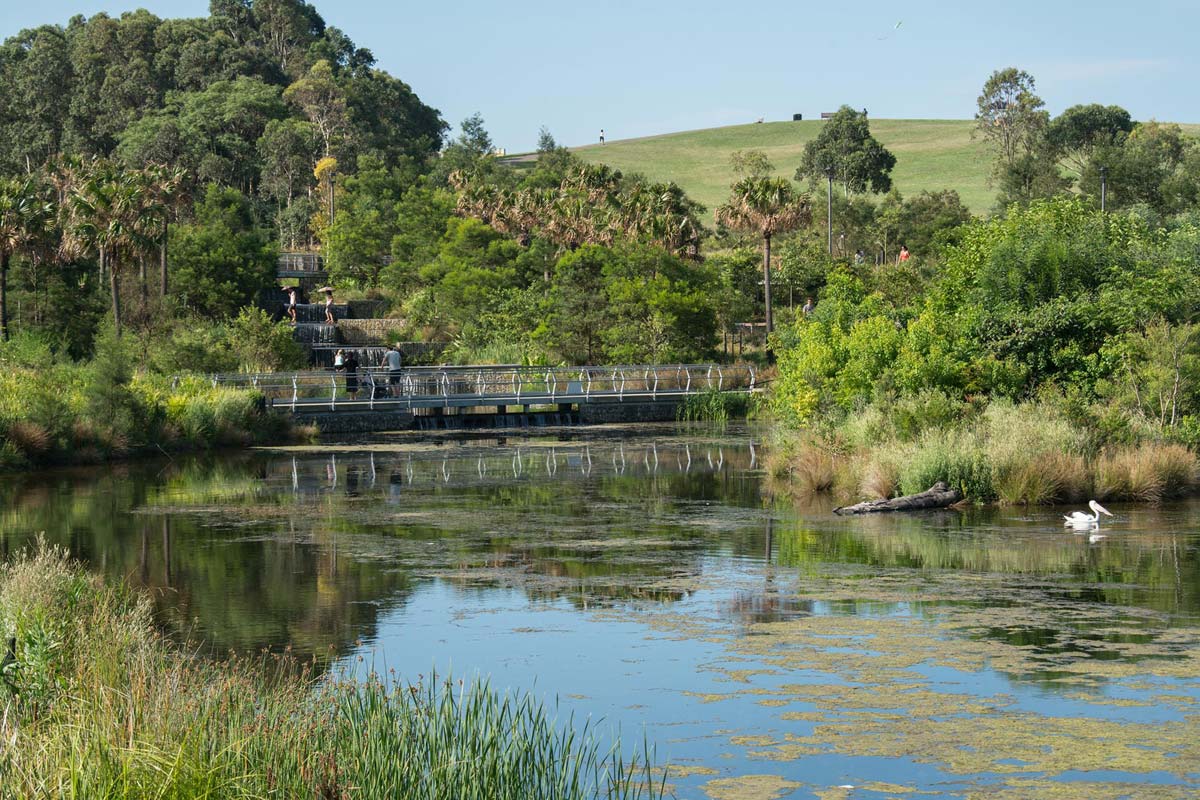 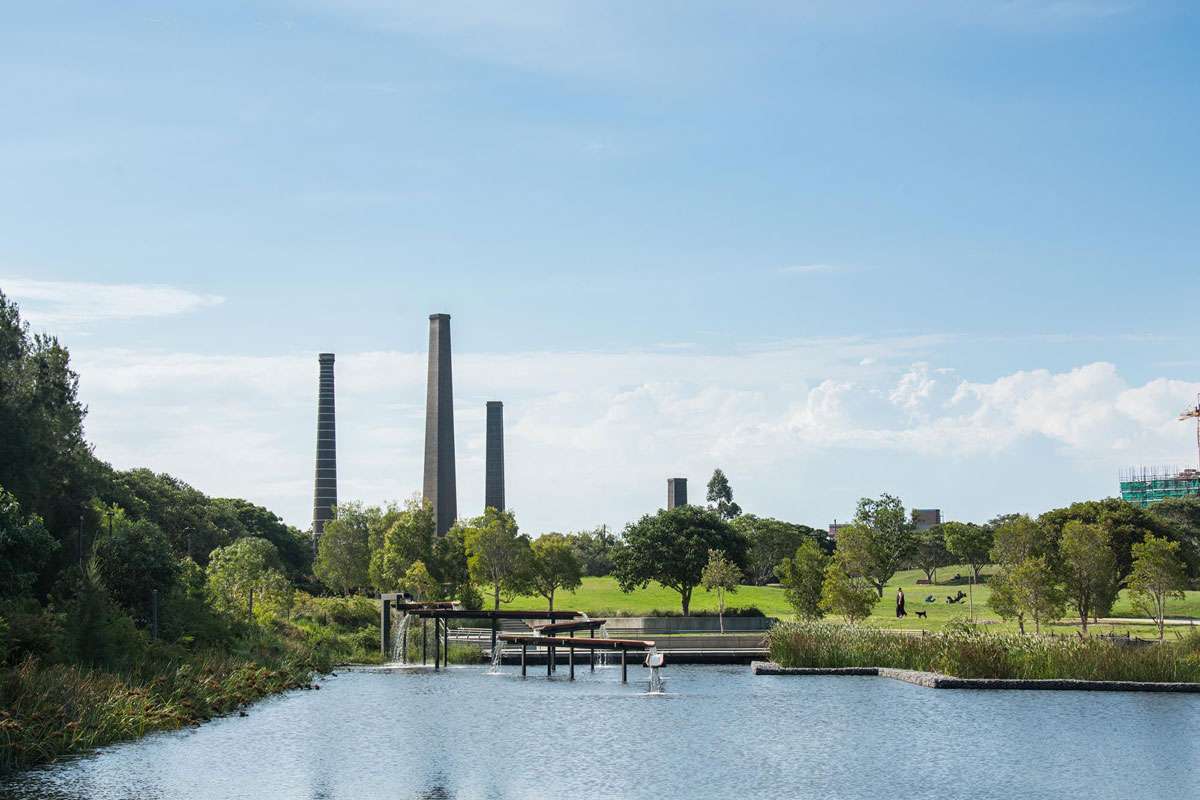 The function and processes of water harvesting and cleansing are enhanced through the visible ebbs and flows through the landscape. New pathways intersect the wetlands, allowing park users to explore and discover ‘moments’ in the landscape that can be at times playful, dramatic and peaceful, but are always connected to the water narrative of capture, movement, and cleansing. 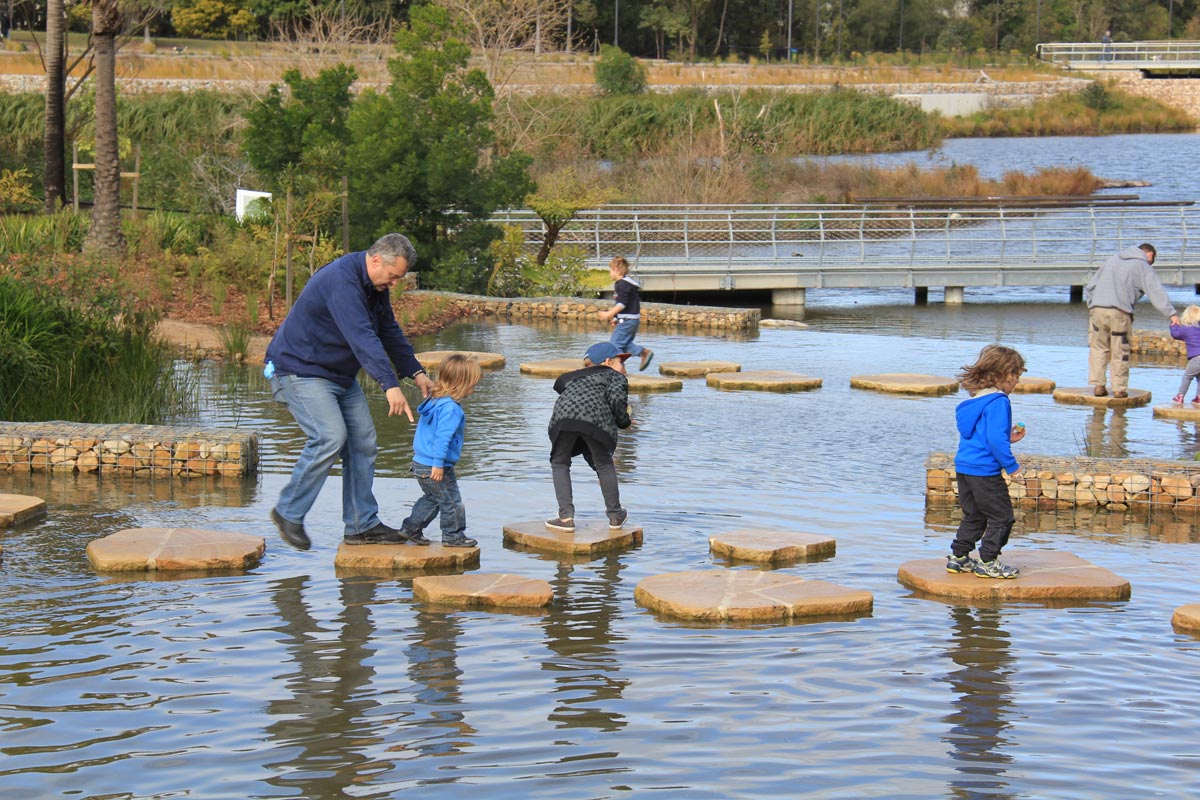 Highlighting these processes was an important part of the project, as they emphasise the intrinsic relationship between water, people, topography, flora and fauna. Public art is also interwoven: Turpin + Crawford Studio’s ‘Water Falls’ celebrates clean water release while also working with TDEP’s cascades to aerate water in the last link in the bioremediation treatment train. Turpin + Crawford Studio also devised the water ‘exhaust fans’ that celebrate the transfer of water from bioremediation ‘paddies’ to the lagoons, playing on the spirit of water and its interactions with the landscape. 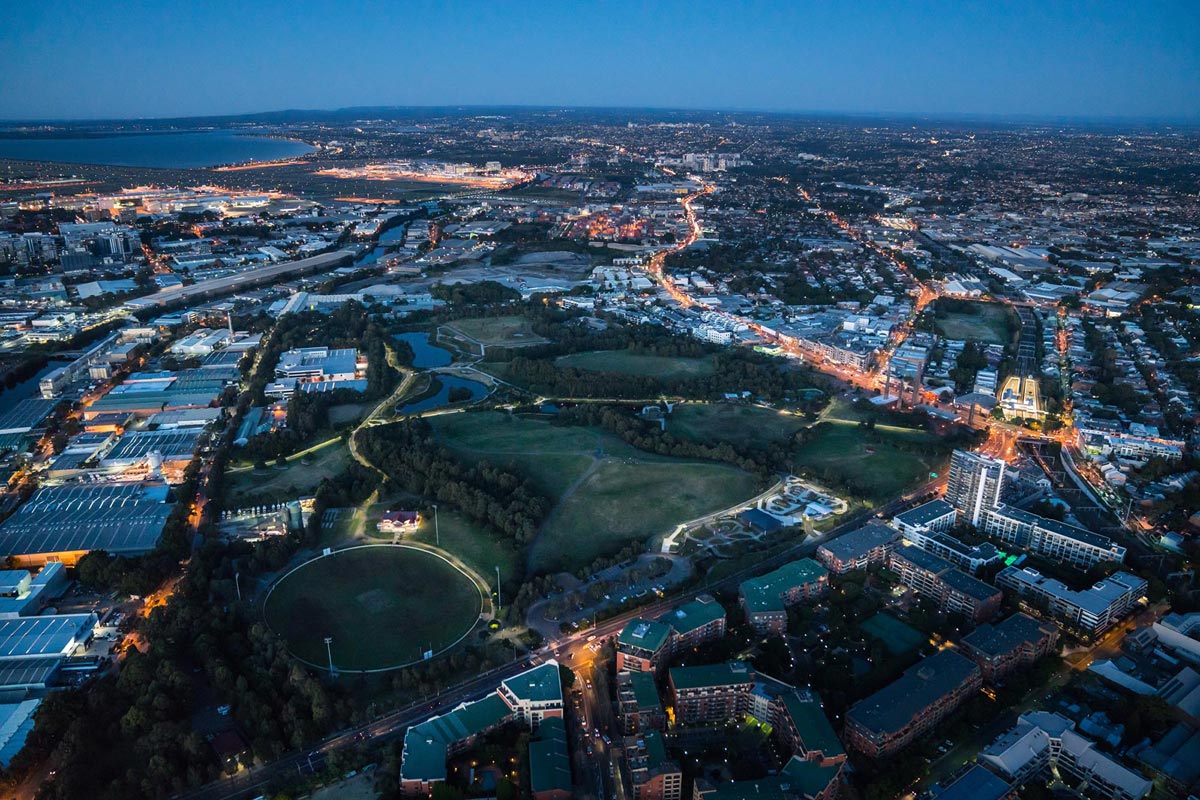 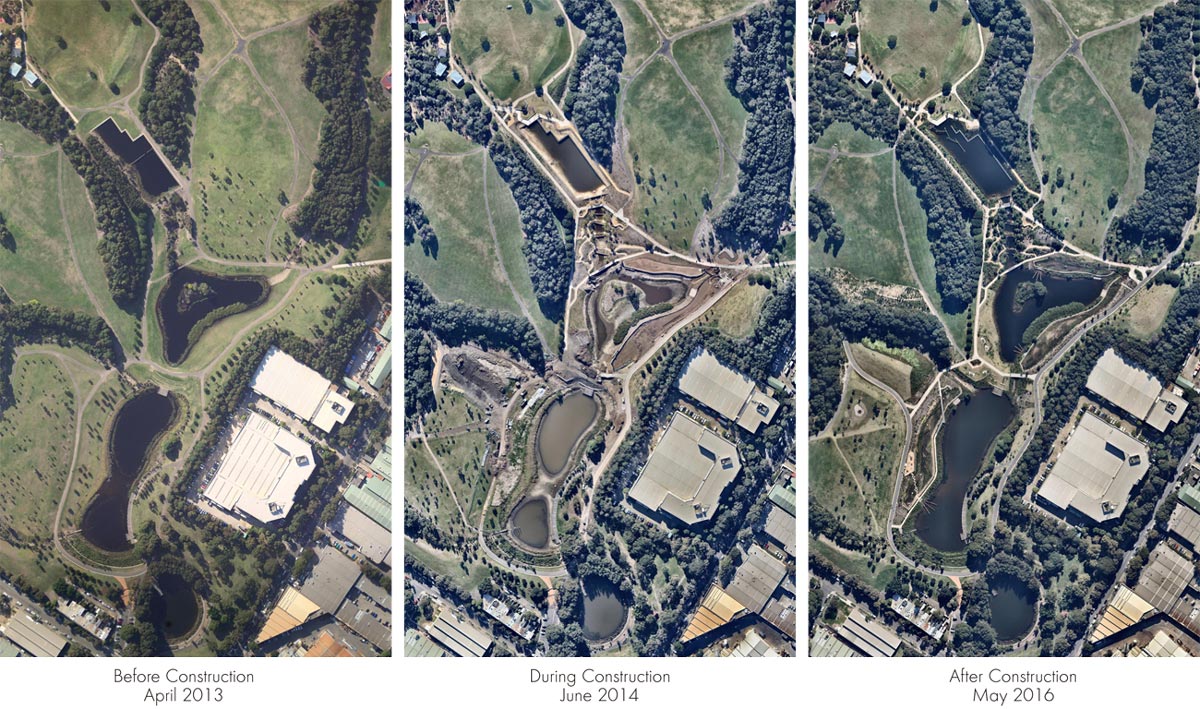