Los Angeles-based B+U Architects, a design office internationally recognized for its digital techniques and use of new technologies and material resources, is pushing the boundaries of architecture and urban design with its Animated Apertures Housing Tower project in Lima, Peru. The conceptual framework for this project arose from the desire to create an architecture that exists between nature and technology, is inspired by natural patterns, movements, and colors, and results in an “interactive and intelligent building organism.” According to the architects, the tower’s design aesthetic embraces incongruence, disruption, and deformation rather than homogeneity and parametric smoothness, the common solution of many digital designs. 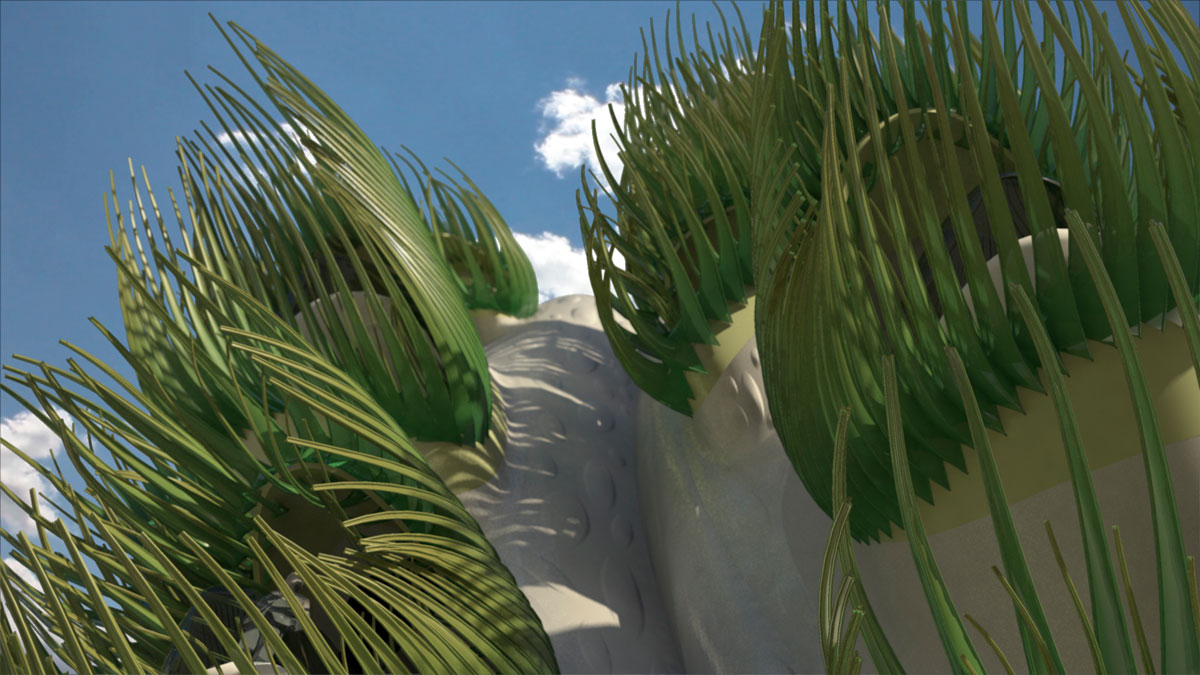 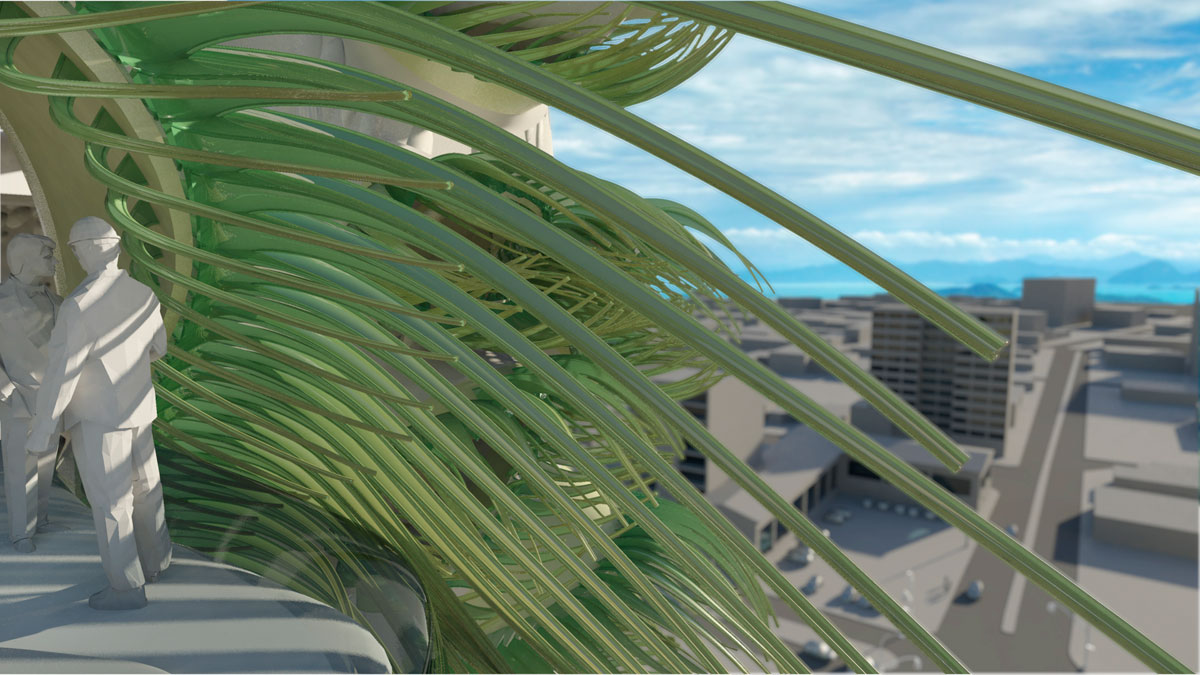 What makes Animated Apertures unique is its rethinking and redesign of windows in terms of function, components, appearance, material, and application to a 20-story residential typology. The apertures function as inhabitable spaces or thresholds between interior and exterior that respond to environmental forces such as sun and wind and exploit potential energetic exchanges between the natural and built environment. The exterior of the building is a direct result of the interior spaces and their relationships to specific points in the city, with linear extensions along window frames that create a soft, blurred building edge that is constantly in flux.

The building includes a ground-floor entry with a cafe and L-shaped living units with a north-south orientation stacked on top of each other. Each unit occupies three levels, giving it a double-height living room oriented to the park. Both living and dining areas have large foldable glass walls that can be opened to create a continuous indoor-outdoor living experience with plenty of cross ventilation. The Housing Tower also has a penthouse unit and a rooftop with a large pool and garden.

The overall structure is a cast-in-place concrete slab and core structure with most of its exterior enclosure made of cast-in-place concrete. The rough, textured concrete shell contrasts sharply against the highly articulated fiberglass composite apertures, which are translucent and illuminated by LEDs from within, giving the tower a distinctive colorful glow at night. By using advanced silicone composites that allow a gradient of material properties within a single object, these apertures are able to move without mechanical parts and mimic systems found in nature. In addition, the new window frames are coated with a thin solar film that produces significant solar energy for the building. B+U’s hope is that with such special technological components, Animated Apertures will help revolutionize and redefine the built environment so that buildings grow less invasive and instead become closer to functioning as adaptable organisms. 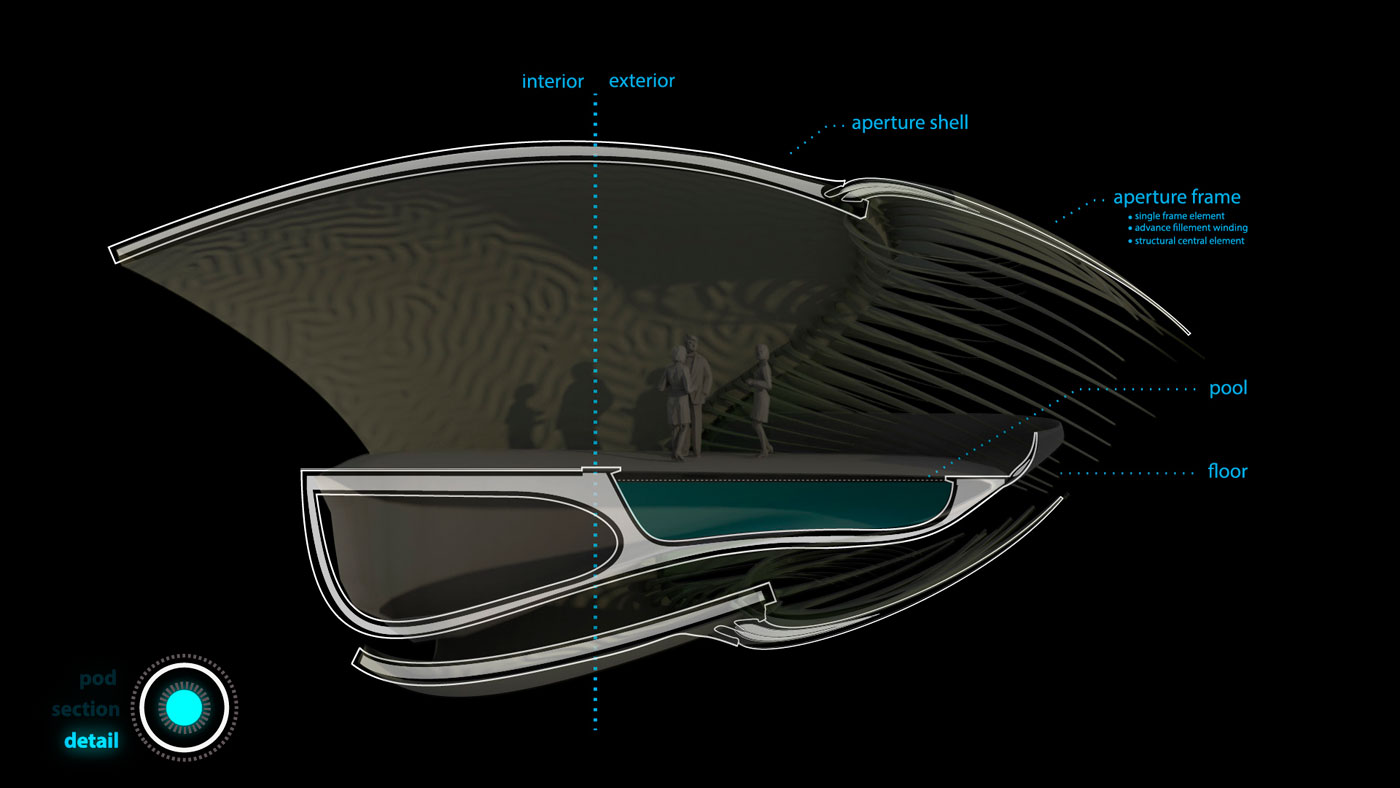 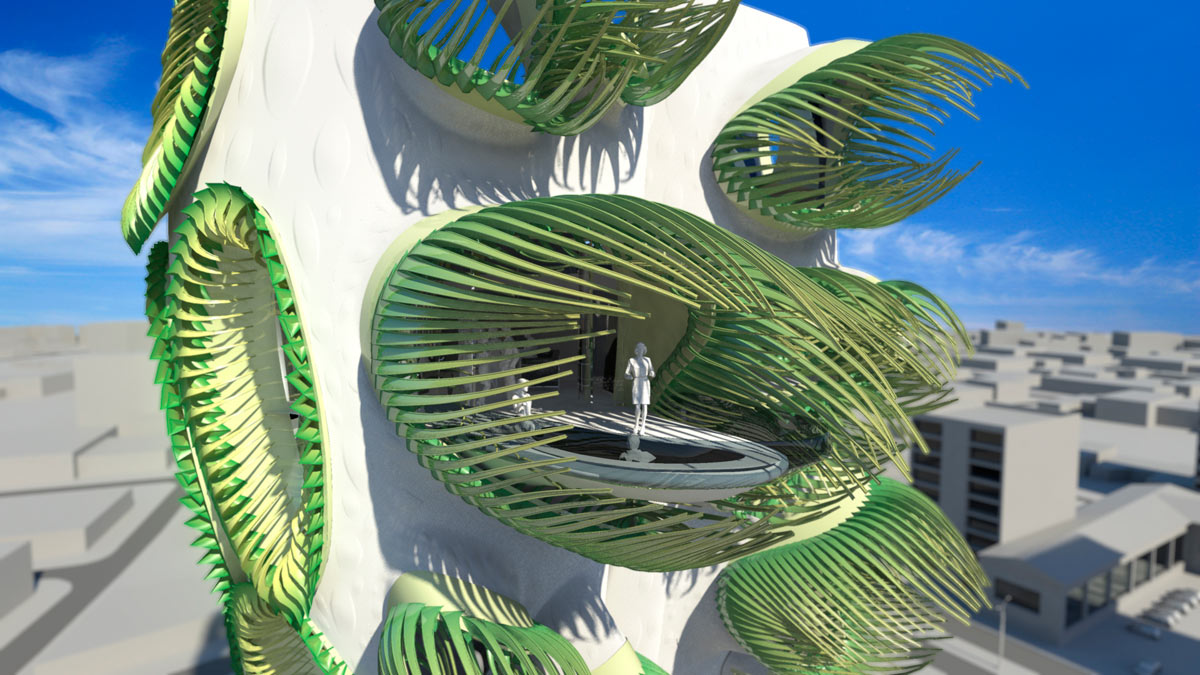 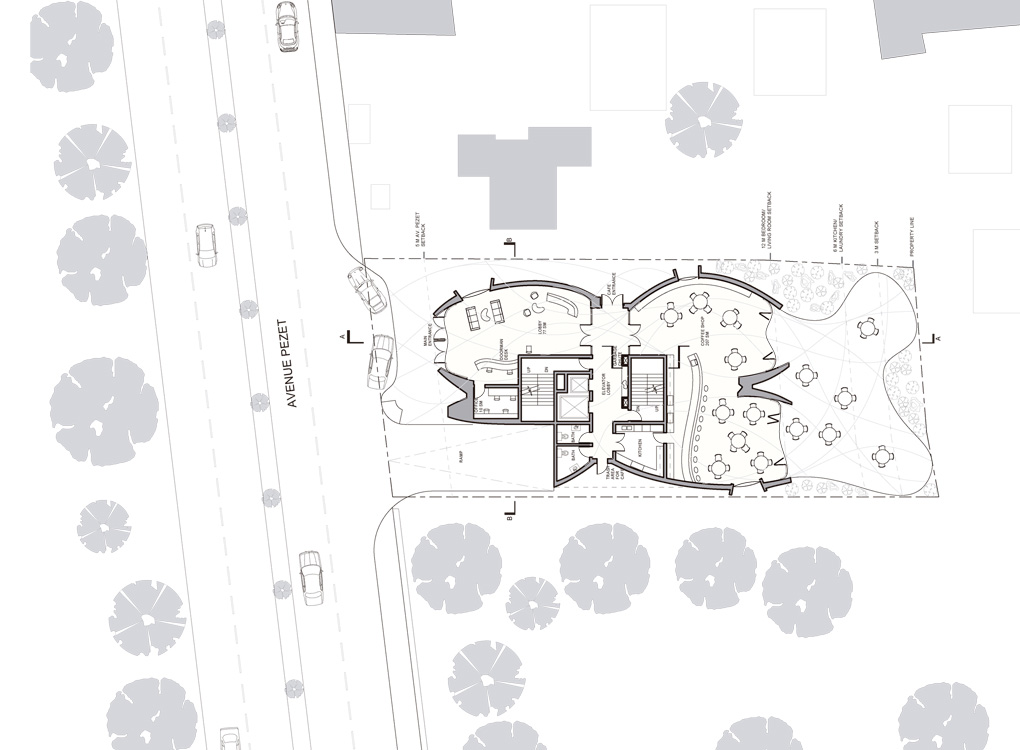 The vision of the new Sky Condos is to develop a unique spatial experience for each condo unit, on the one hand, by utilizing an L-shape sectional diagram that maximizes double-height spaces and outdoor areas through interlocking the units in plan and in section (an evolution on the Corbusier cross section of l’Unité d’Habitation) while also simultaneously developing a window typology that aims to dissolve the edges of the window frame creating a unique view to the outside. The window itself is not just a flat aperture but a three-dimensional spatial object that shapes the interior walls and aims ones view toward key features of the surrounding cityscape. For example, it allows for views towards the San Isidro Golf Club to the north and the Ocean to the south even from spaces along the east and west façade of the tower.

The building massing was the result of intersecting several cone-shaped towers, dividing each floor plan into four discrete segments that coincide with the division of the program on each floor and maximize the exterior surface. The articulation of the exterior of the building is a direct result of the placement and the aiming of the apertures and their relationship between the interior spaces and points in the city. The linear extensions along the window frames create the effect of a “soft” building edge, intended to dissolve the sharp lines of a typical building skyline and to create an iconic addition to the city of Lima.

The design of the envelope fundamentally shifts away from the architectural norm by eliminating the obligatory curtain wall solution in favor of a concrete load-bearing shell, which provides an efficient structure and frees the core from the burden of lateral forces, creating highly efficient, column-free open spaces in the building’s interior. The large openings in the shell are modulated depending on views, sun exposure, and luminosity and are designed to receive the large apertures, which are fabricated independently using fiberglass composites. The rough-textured concrete shell is contrasted with the highly articulated fiberglass composite apertures that are translucent and illuminated with LEDs from within, which gives the tower a characteristic colorful glow at night. 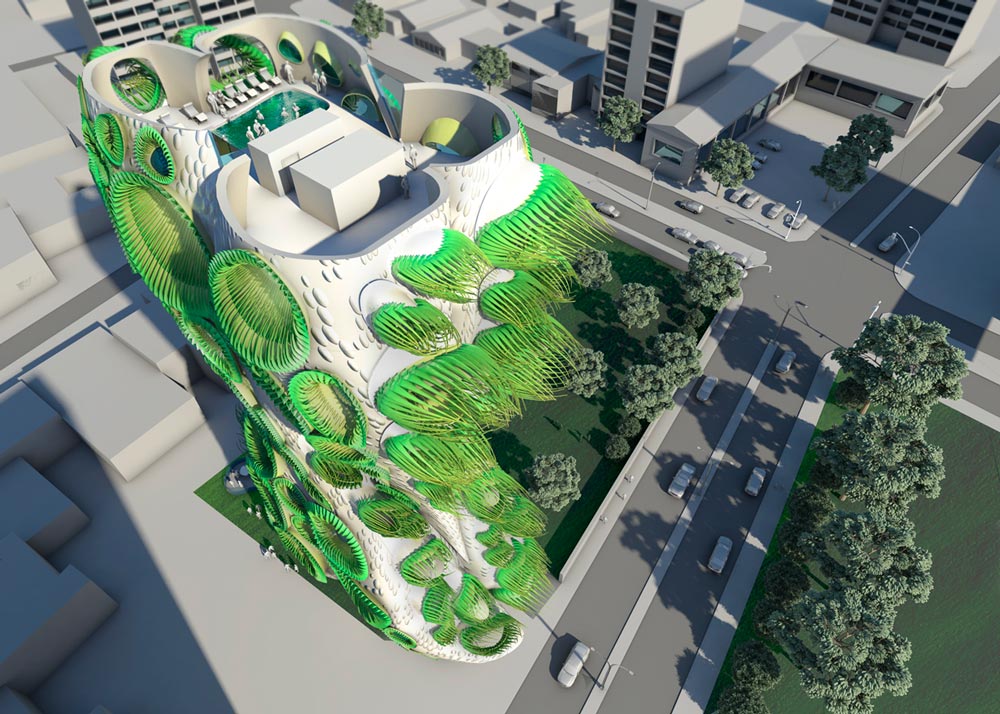 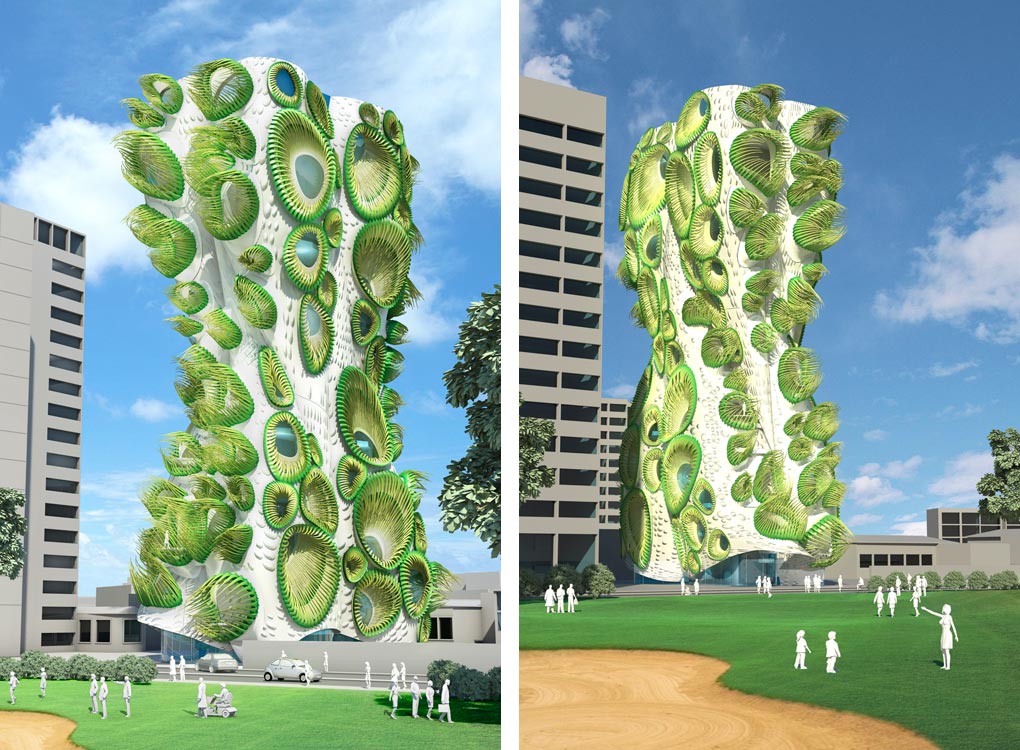 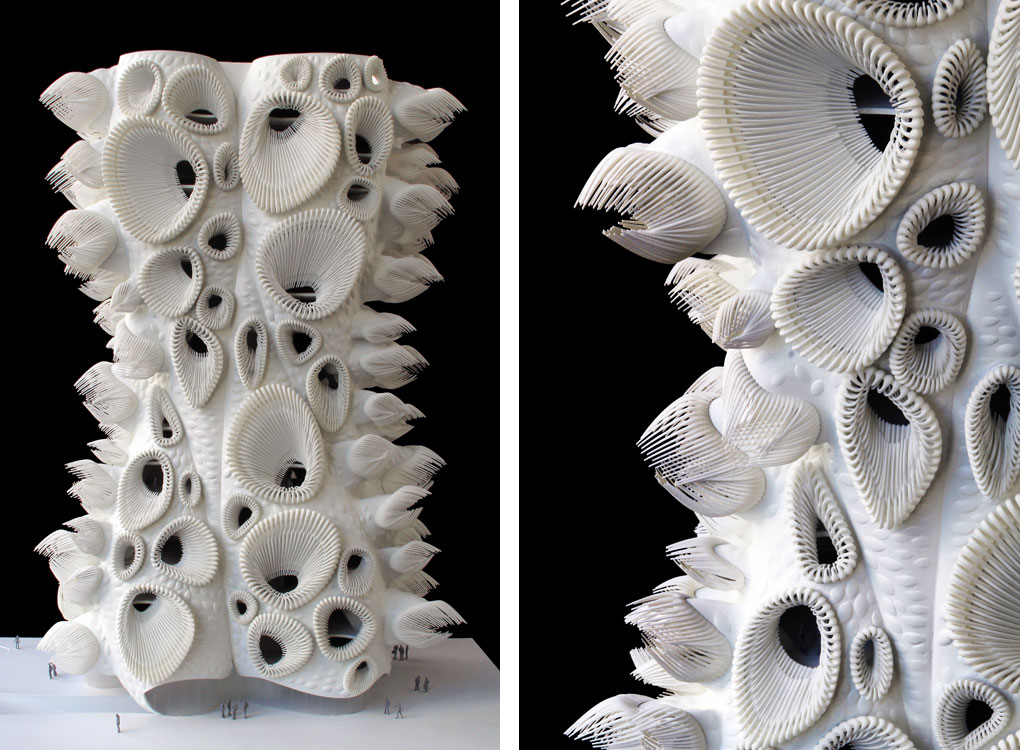 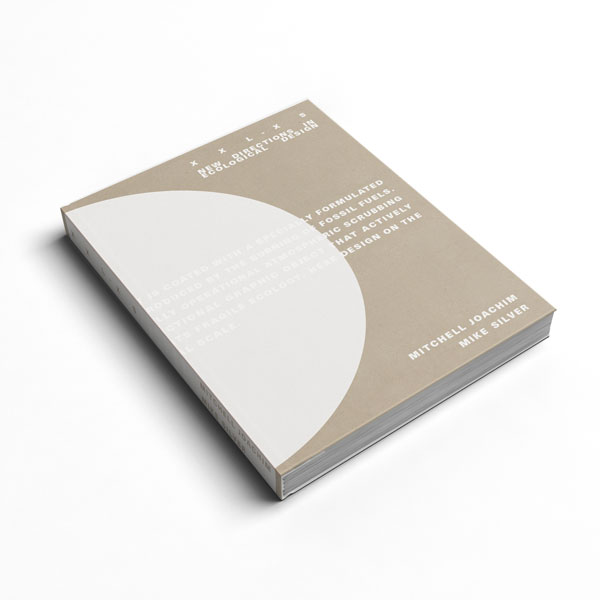