Roskilde Festival Højskole is the first purpose-built folk high school of its kind in Denmark in 50 years, based on the ideals of the Roskilde festival. The ideals and values are very much influenced by the volunteer engagement, the humanistic focus and the creative power that characterizes the Roskilde festival and its community every year. 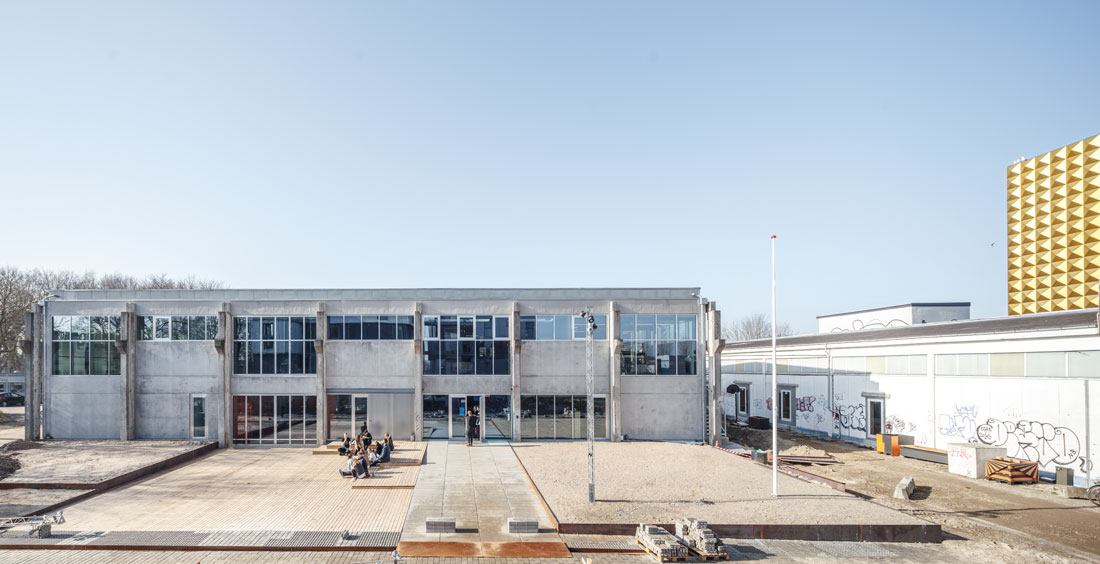 The Roskilde Festival Højskole is closely linked to the world-famous Roskilde Music Festival, which, once every year, temporarily turns this small town on the outskirts of Copenhagen into the fourth-largest city in Denmark. The school is an example of the Danish system of folk high schools, which deliver a “non-formal adult education” following the concept of “lifelong learning”. This system is based on the ideas of the 19th-century Danish intellectual N.F.S. Grundtvig, who believed schools should educate their students to be active participants in society. Courses at Roskilde Festival Højskole last from four to 10 months, with students and teachers living together at the school to achieve total immersion in their education. The Roskilde Festival Højskole is the first purpose-built school of this type in Denmark in 50 years and aims to further the values of the Roskilde Festival through courses in music, media, leadership, politics, art, architecture, and design. 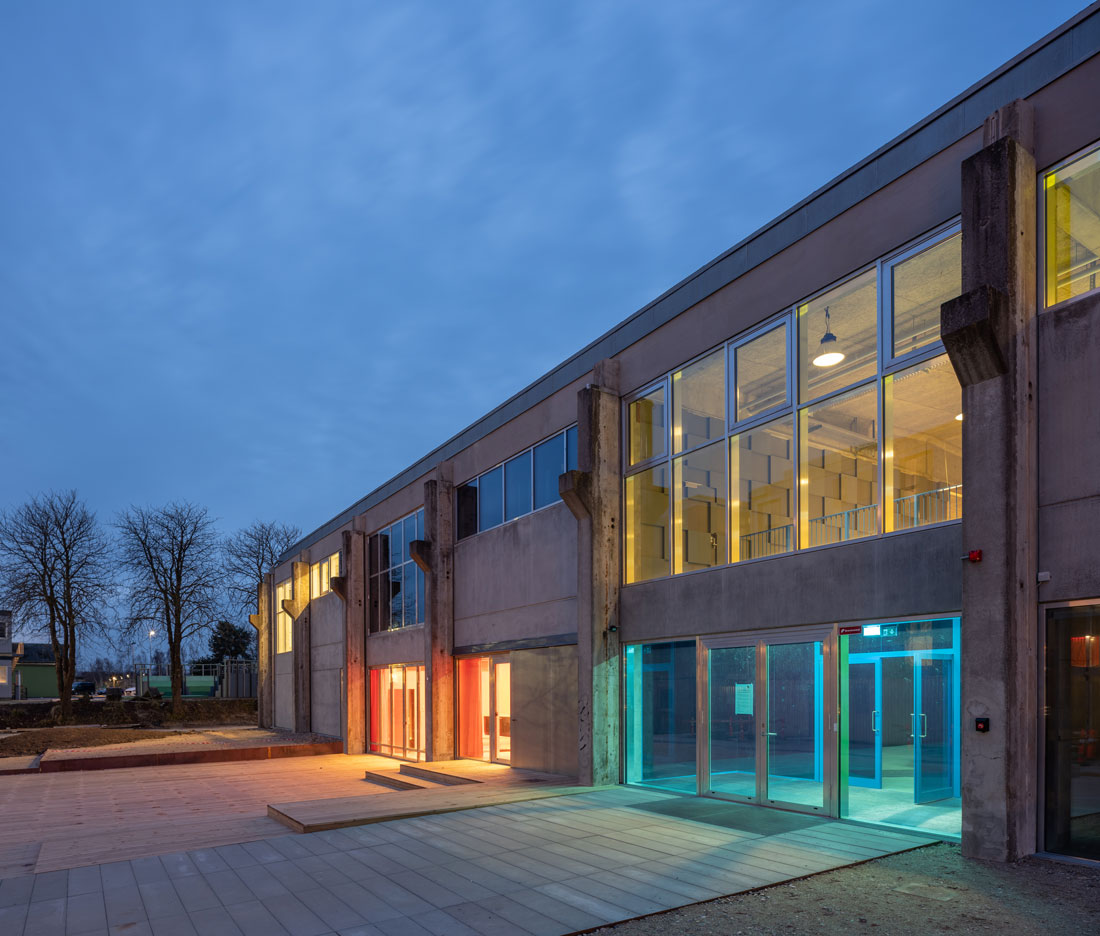 The full plan for the site includes the school, housed in a former concrete factory, two new blocks of student housing, a building to house the school’s staff, and a strip of adaptable shipping-container-based structures that will host an ever-changing group of innovative startups – many with connections to music and youth culture. These newly completed buildings will act as the backup group for the “lead singer” – the Ragnarock museum, completed in 2016 – providing rhythm and energy to complement the museum’s singular charisma. 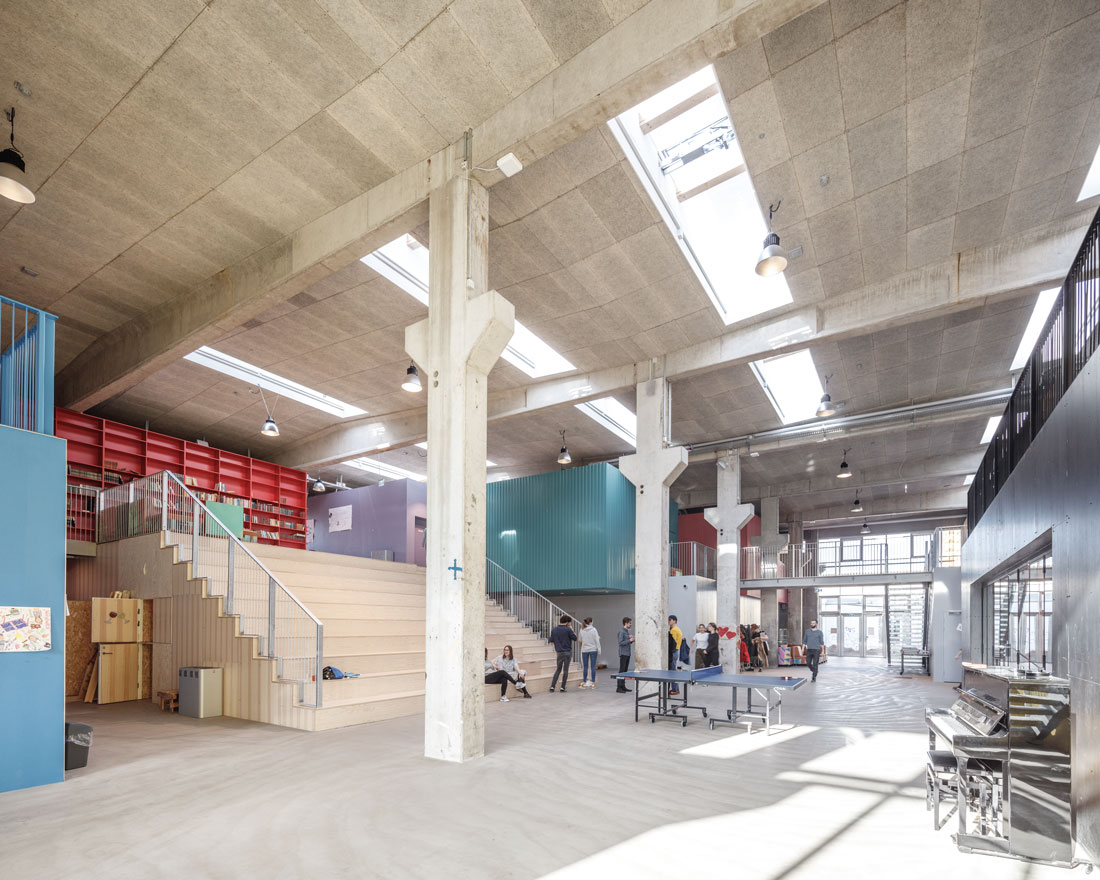 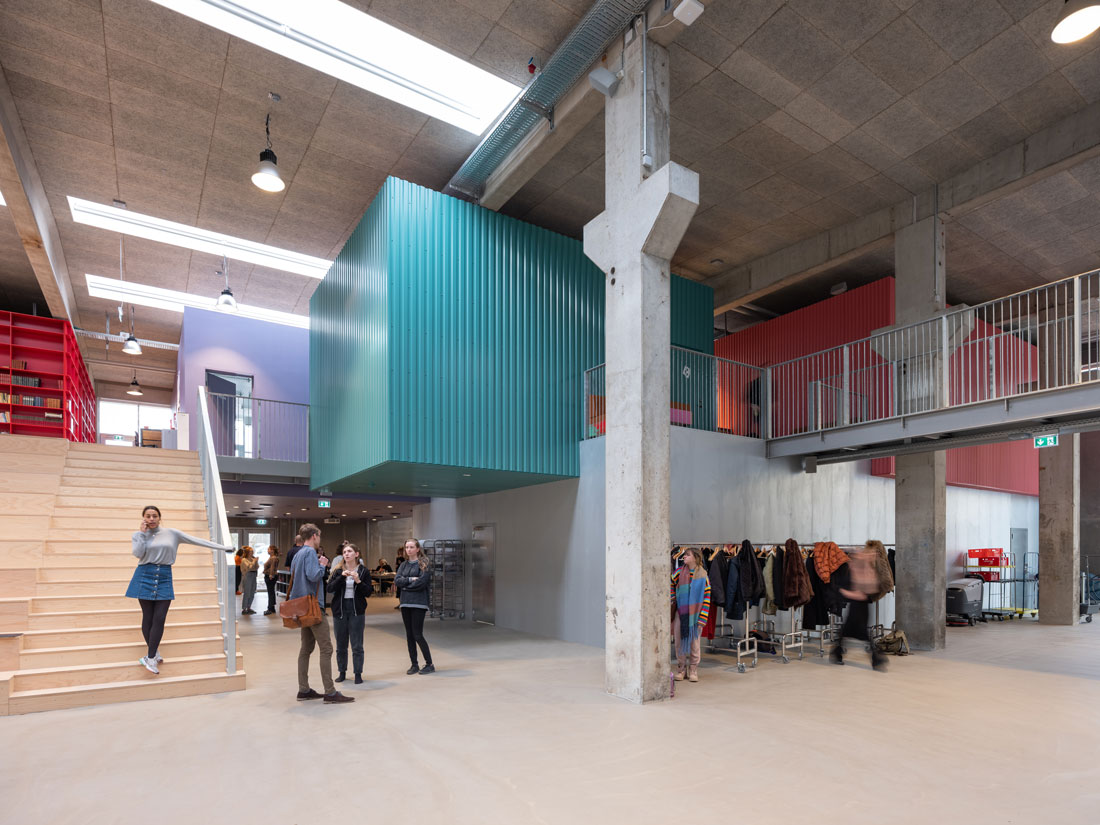 “Our design, just like the school itself, was inspired by the spirit of the Roskilde Festival. It is all about music, art, activism – but most of all, freedom,” says Jacob van Rijs, principal and co-founder of MVRDV. “The Roskilde festival combines ‘having a good time’ with innovation in an informal way, giving a special vibe that we wanted to capture in the design of the interior of the school.” 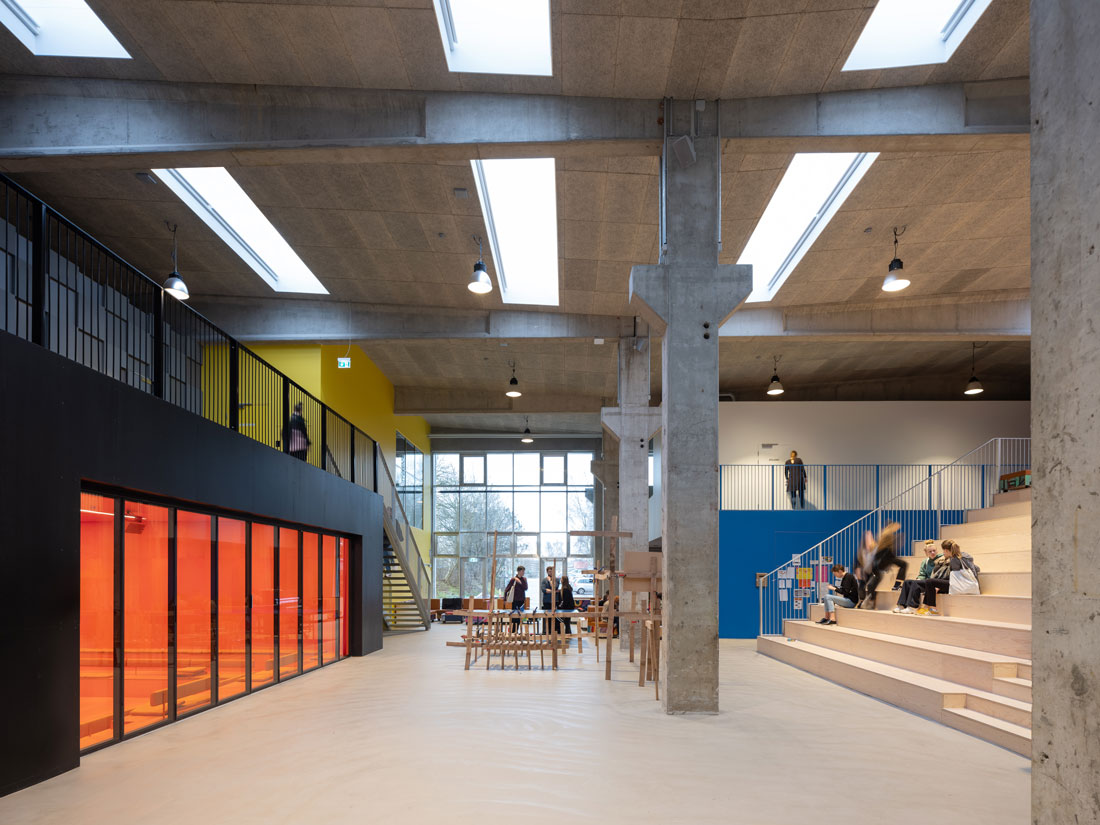 The school itself is housed in a former concrete factory, reusing the original structure’s columns and roof but replacing the walls and interior. The design is based on a “box-in-a-box” concept: colorful modules fill the warehouse-like shell of the main building, all arranged around a central spine cutting from one side of the building to the other. Alongside this route is a wooden tribune that acts as the communal heart of the school. 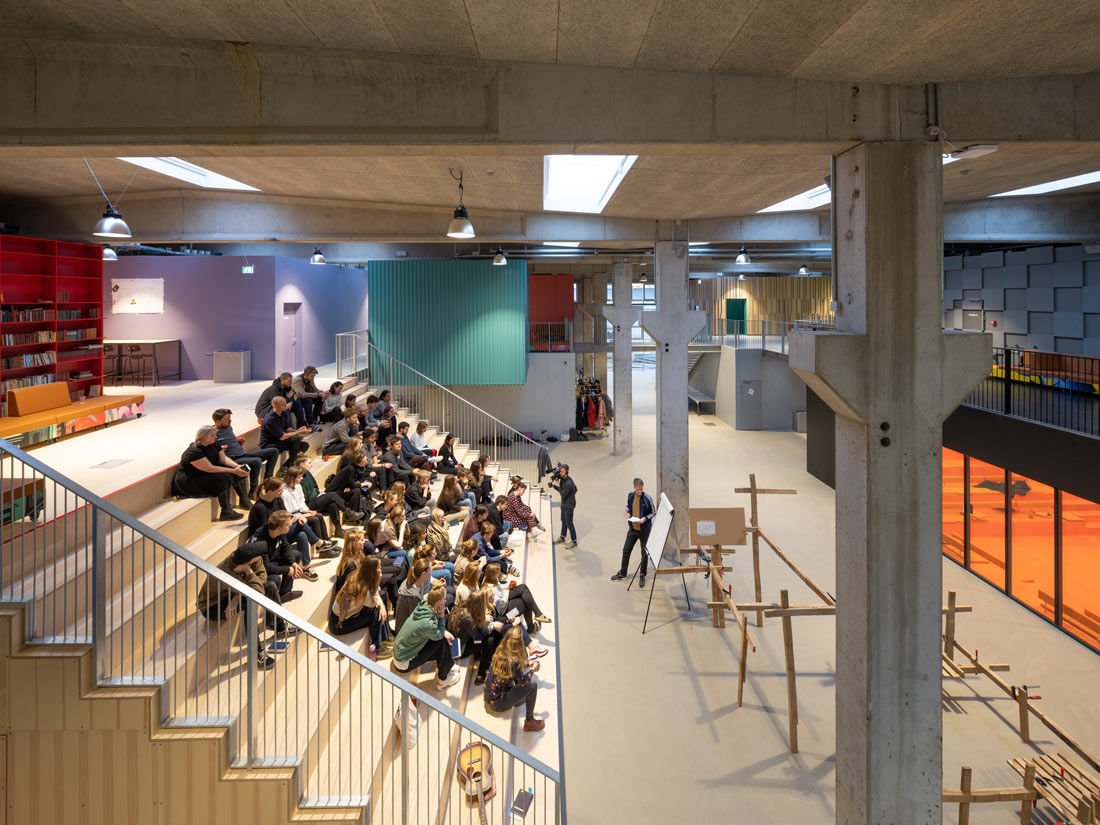 “For me, as a former folk high school student, it was a very special task to transform a former concrete factory into a folk high school with the purpose of shaping future generations of students,” says Dan Stubbergaard, architect and founder of COBE. “By opening the building up and adding new boxes inside the old structure, we revitalize the building. A defunct industrial building has become a bustling hub for creativity and community.” 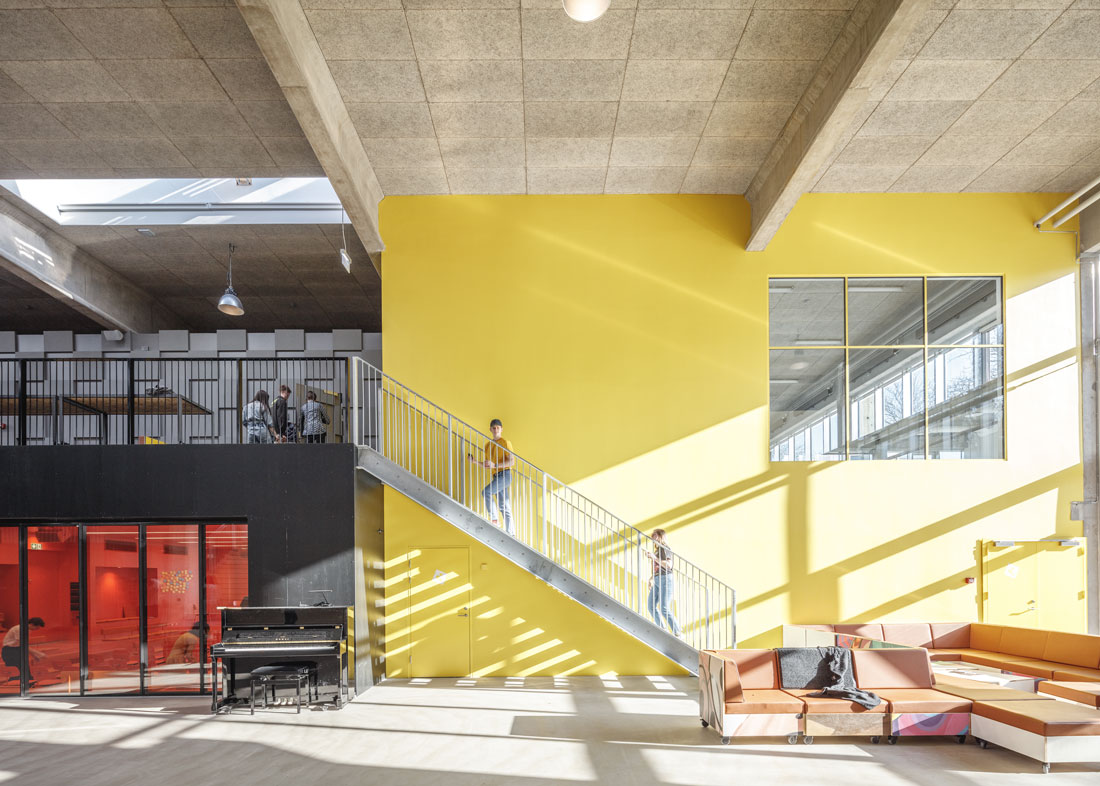 The boxes host a variety of different functions, including an auditorium (called the Orange Stage in a nod to the festival’s main stage) for 150 people, a music studio, a workshop, and classrooms for dance, art, and architecture. These functions are arranged into three zones: some host pursuits of the mind, including writing, thinking, debate, and leadership; others are focused on students’ use of their bodies, including dance and music functions; while the third zone hosts activities focused on hands, including visual arts, architecture, and design. 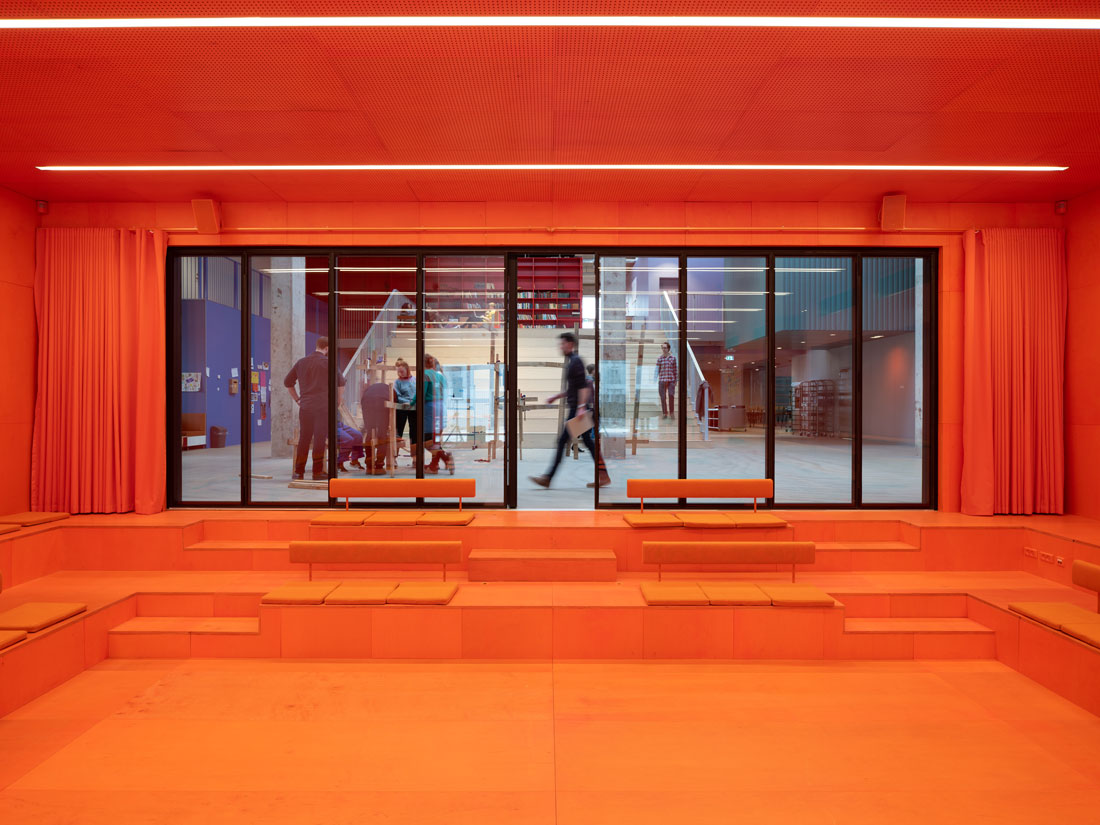 The two blocks of student housing complement the character of the site with their simple, industrial aesthetic. They are constructed from modules of wood structure, sheathed in metal, evoking the appearance of shipping containers, and the two blocks are connected on each level by an external steel walkway. Inside, each student shares a room with one or two classmates, with rooms on each floor arranged around a bright communal space.