Rehabilitation of Zsolnay Factory: Greening Back the Public Space

The area of Zsolnay Quarter is divided into a southern and a northern part. The much bigger northern part – as part of the Zsolnay family’s living space ­­– was originally created as an English landscape garden, interlaced with the family’s own works as in a fairy tale. On the other hand, the southern area could be interpreted as the opposite of the northern part. It was a kind of a source of energy for the factory that ensured the essentials for functional operation: raw materials were deposited here because of the site’s proximity to the railway, and the water required for manufacturing processes was drawn from a stream that once ran through the area. Because of the site’s purely industrial functions, the areas around the buildings were totally paved, and at the time that the design process began the paving was definitely chaotic: here and there with asphalt or concrete, in some other places the original clinker paver bricks could be seen, along with an old loading ramp, a supporting wall and a huge concrete terrace. 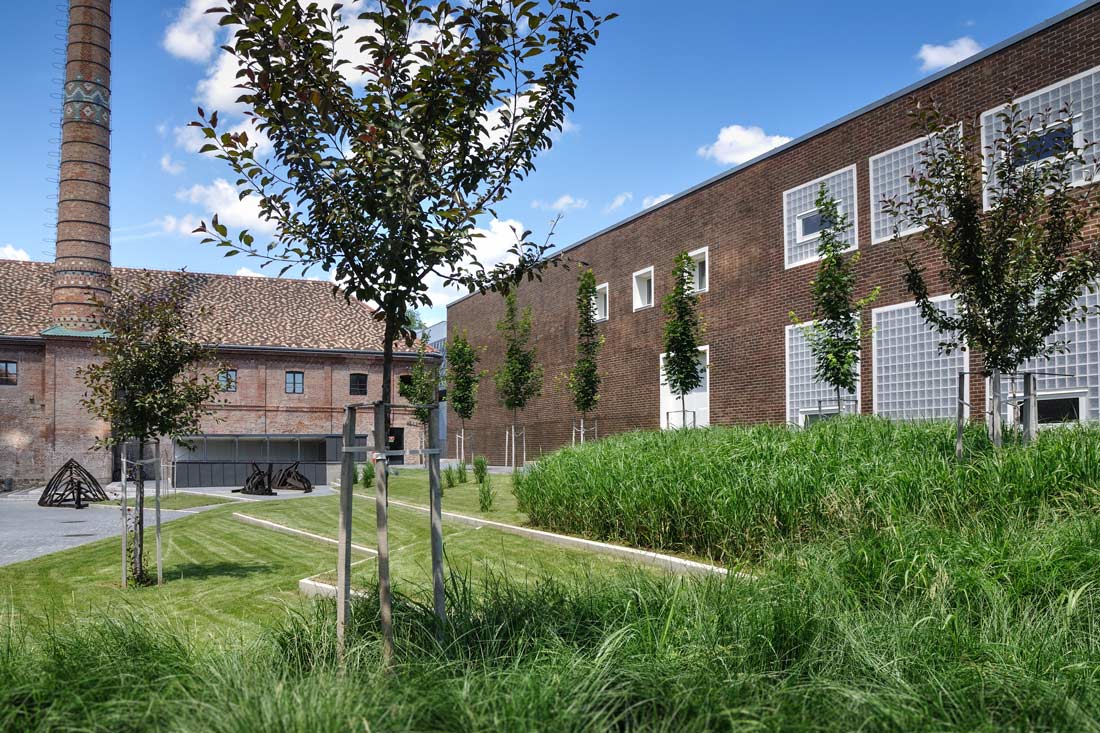 The southern area of Zsolnay Quarter functions as a part of a campus, and the concept for the landscape design was based on the original conditions of this industrial area. According to the plans, the area evokes the process of succession, which transforms the abandoned industrial area into a landscape, creating a spatial situation that is intended to inspire the university students with these “open sentences”. The garden, in its entirety, creates frames for the students’ everyday life and becomes complete when they take possession of it and adapt it to their own demands.

The environment can be divided into two parts. The first part is a natural landscape area (the university garden), located on the eastern side between the parking garage and the railway area. The other part is on the western side, surrounded by the university buildings, which can be defined as the student’s personal area (the university courtyard). 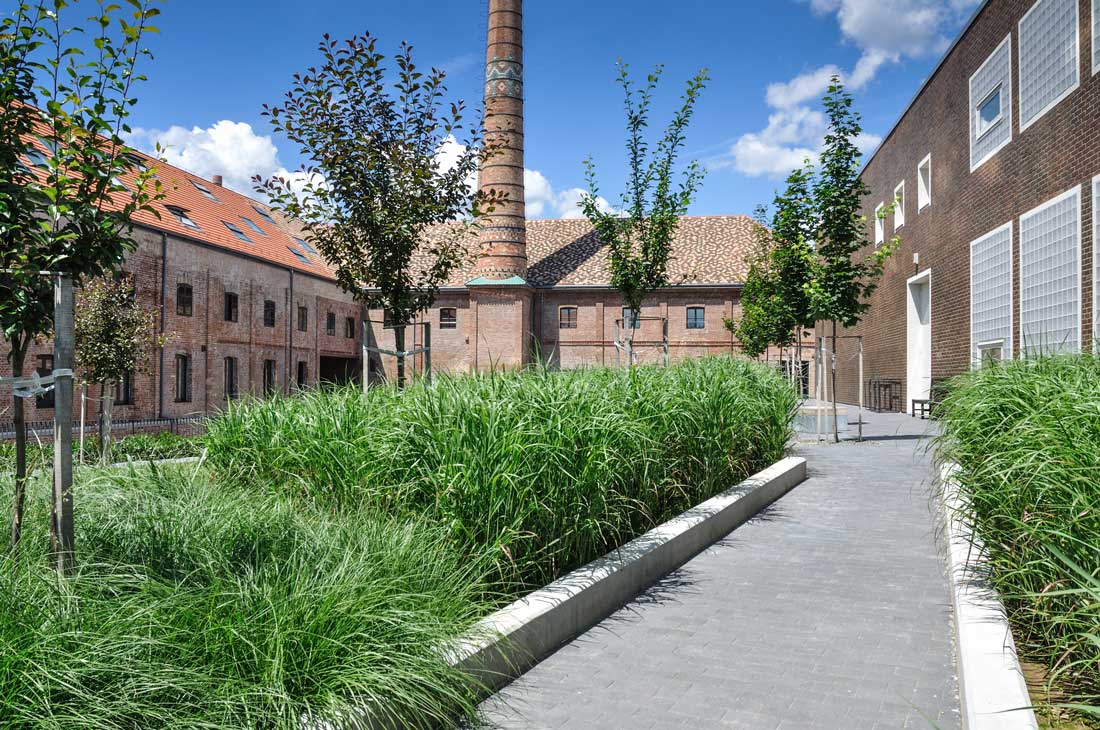 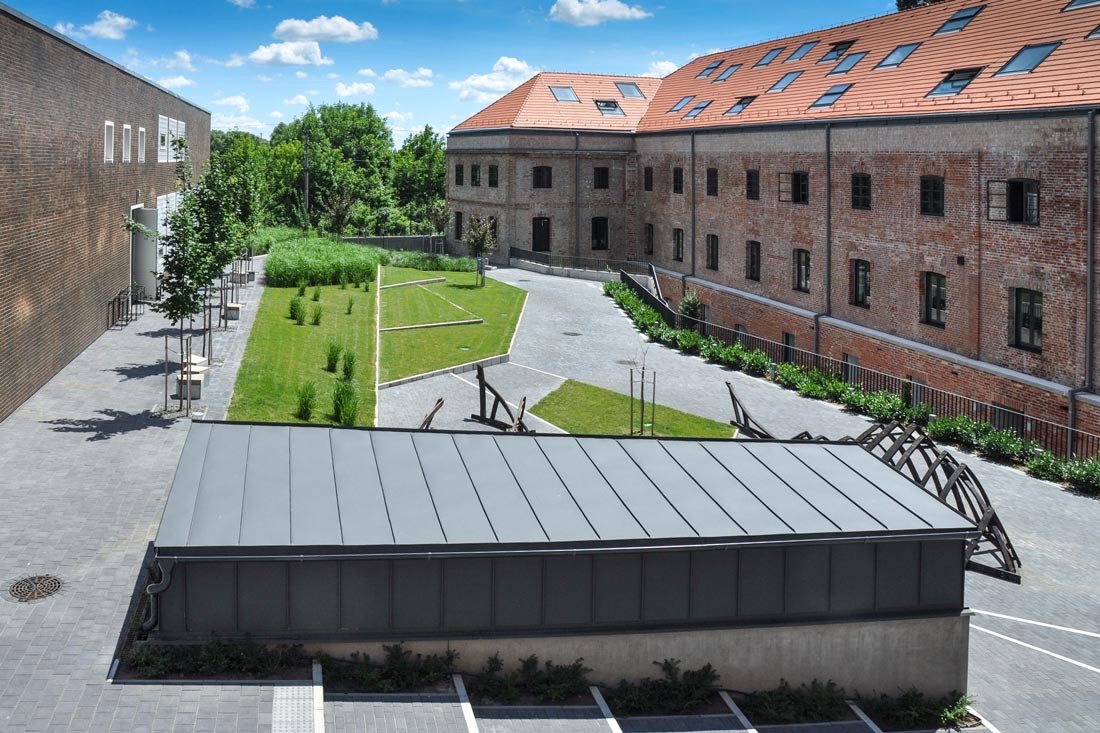 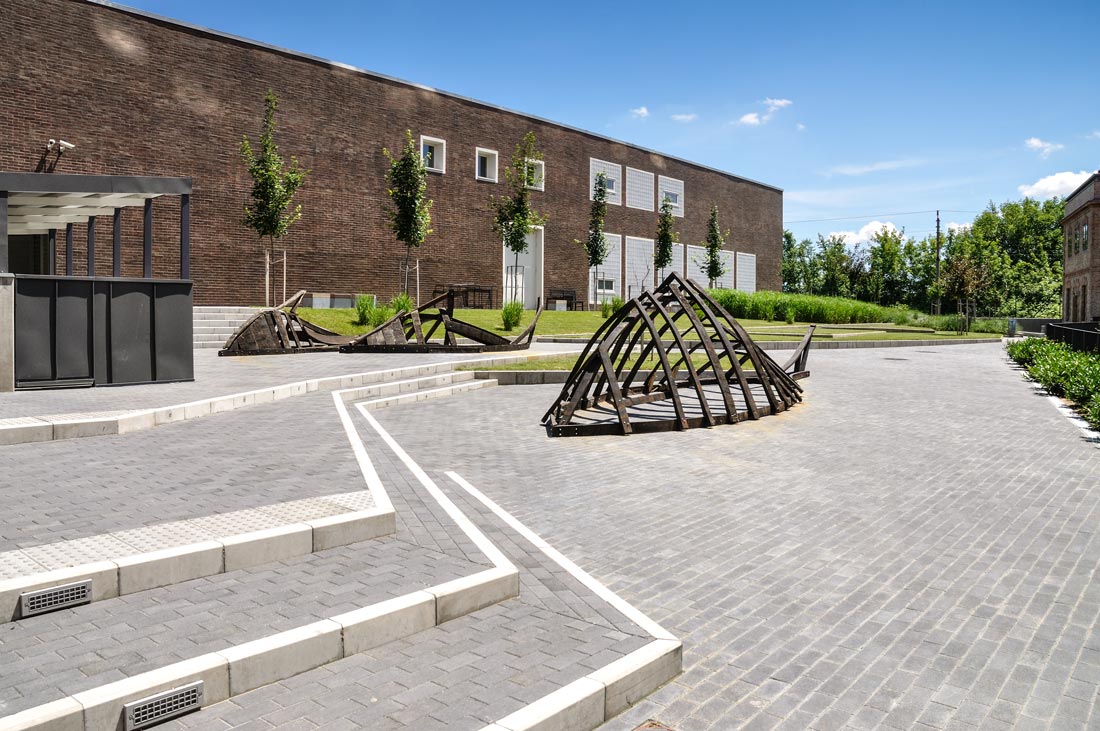 In the landscape garden of the university garden, the various kinds of spatial situations and natural surroundings could have afforded opportunities for various recreational programs. The traces of the factory yard were still perceptible: the asphalt pavement could have remained, partly as a garden path, partly crumbled with pioneer willows growing from the cracks. The industrial water could have been transfomed into natural water and dammed up to create a lake. The loading counterfort could have been turned into a waterfall, all surrounded by the old clinker paver bricks. A rectangle-shaped prism could have extended into the lake, covered with shaven lawn, and a pergola in the middle casting a shadow on the newly formed resting area. And all this could have been surrounded with a wildflower meadow changing into a woodland toward the edge of the area. 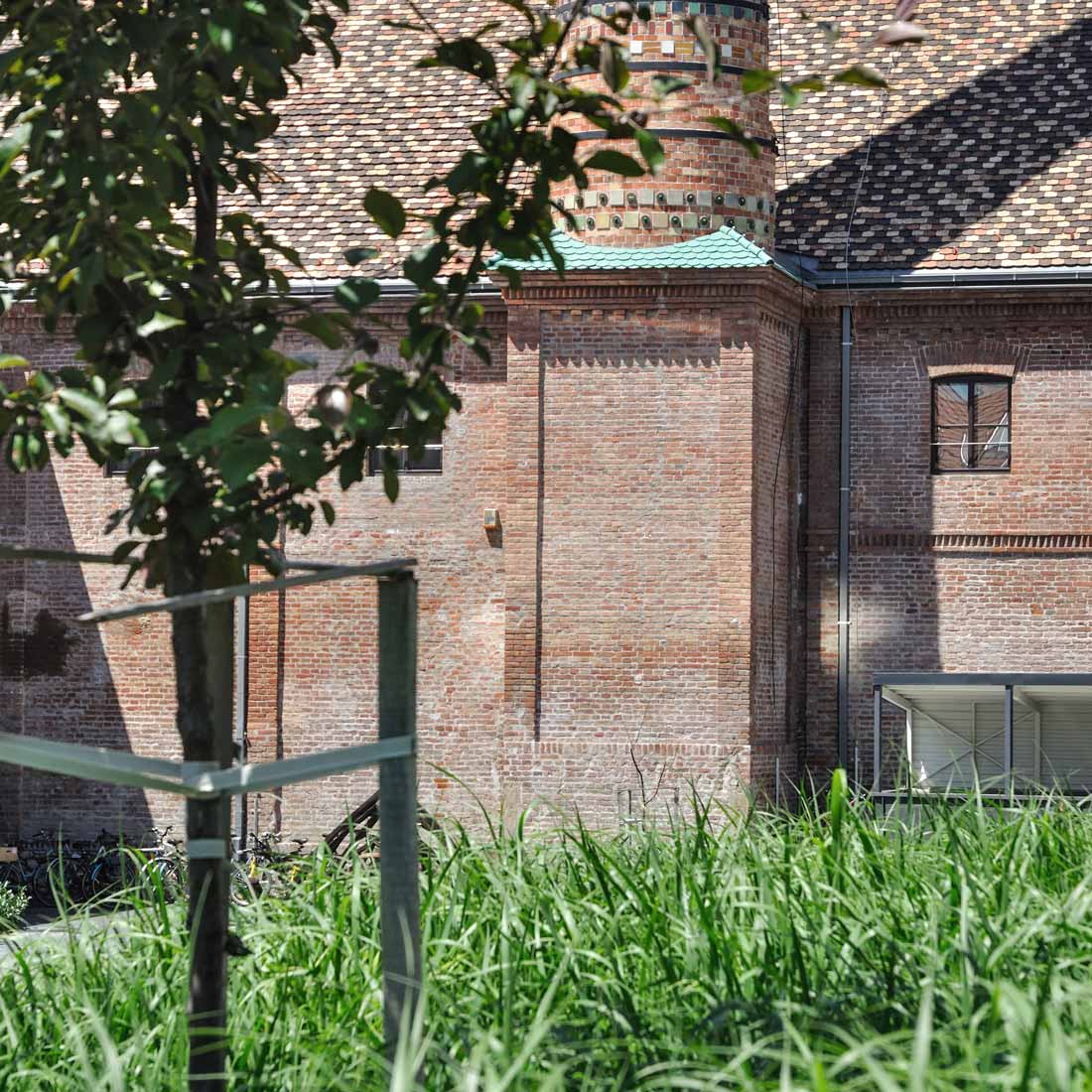 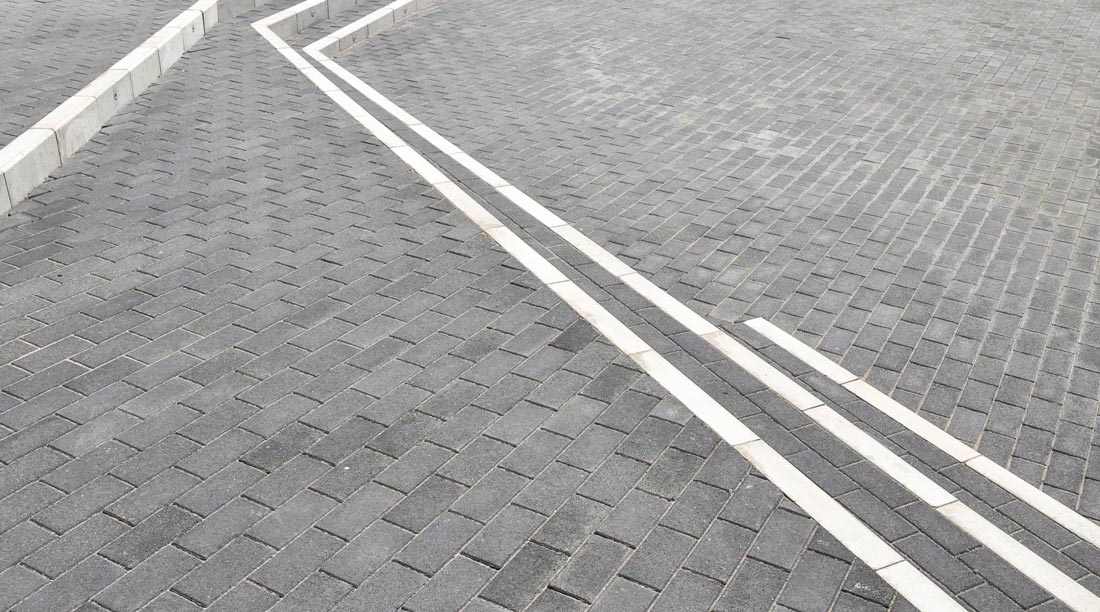 The practical advantage of the project could have been the preservation of the original stuctures and materials, so there would have been less demolition and the stream could have been developed. Ultimately, things worked out differently during the execution. The asphalt pavement couldn’t be kept, the clinker paverbricks were unusable, and creating a lake would have been too expensive. Finally, the asphalt pavement became a path covered with crushed stone, and the lake, using its original outlines and levels, was transformed into an artificial grassy terrain feature and now functions as a great place for leisure. The covered pergola was reduced to white columns standing regularly in space. The original clinker paver bricks have stayed as a reference to the site’s past. 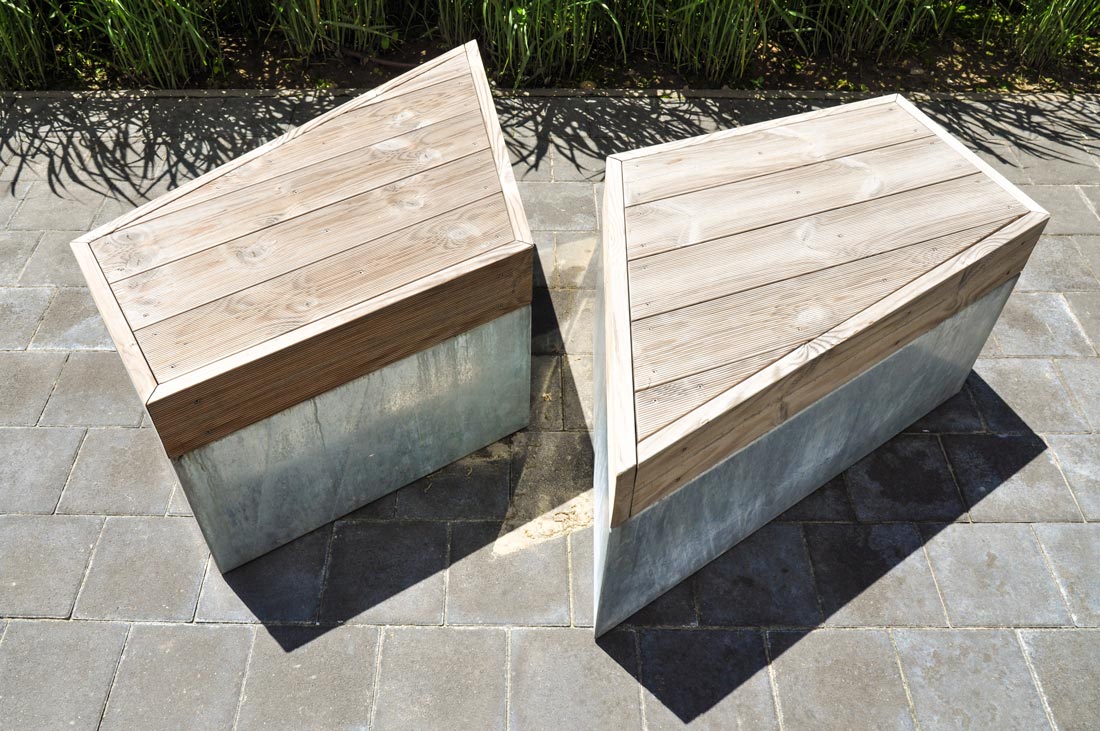 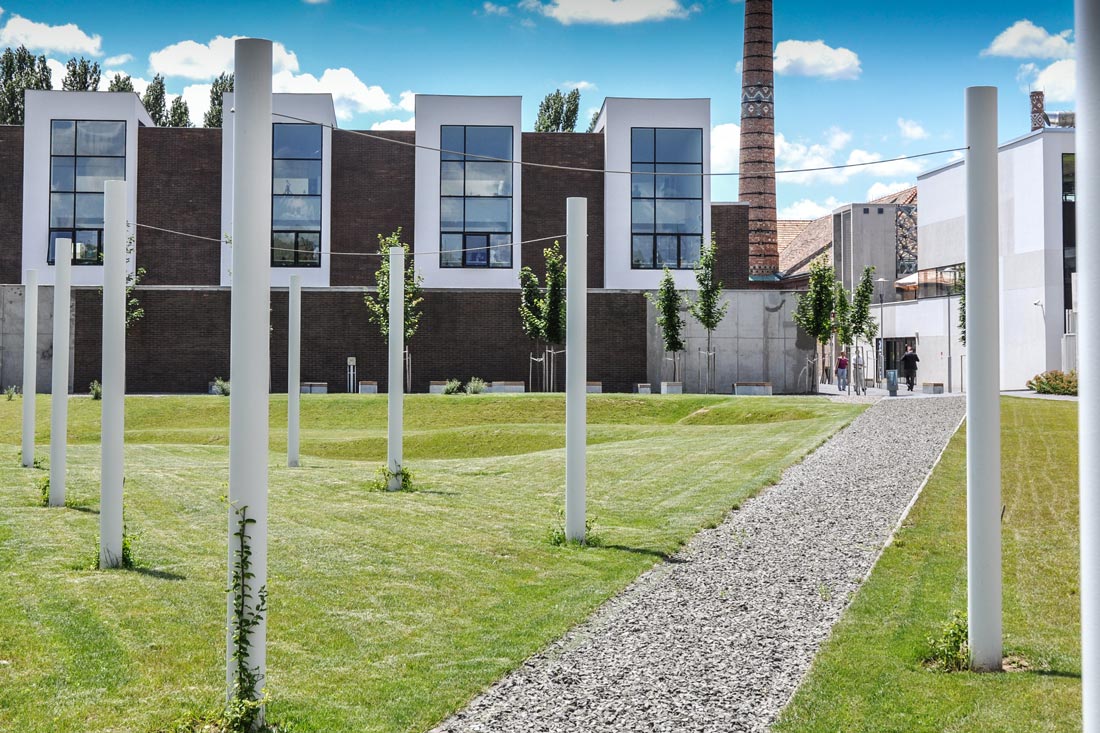 The function of the university courtyard is to provide a place for the students to get together and organize events, so this area works as an open-air assembly hall. The composition of the courtyard was created by the abstraction of the natural environment of the university garden. The pavements become crushed by gradual natural forces over the years: the various levels are transformed into terraces of different heights. There is a 1.5 meter vertical difference between the two sides of the courtyard that is spanned by staircases meandering through the area and connecting the terraces. The place is organized by a grassy slope (which originally would have been a water feature) and a pavilion. The layout of these objects lends closeness to the place, creating the aula-like square, and the pavilion can function as a snack bar for the students. There are some bigger relaxing terraces connected to the grassy slope, some of them paved, others grass-covered. Amid them, ornamental grass plantings divide the area into smaller, intimate parts. On the west side, the building is separated from the garden by a long areaway that is large enough for the students to exit the lower ground floor and spend their free time or work here. The parapet wall is open on the south side, and a staircase connects the couryard with the areaway. From the south, the courtyard is separated from the railway by a huge ornamental grass planting that not only ‘stops’ the space, but is also a reference for the vegetation of the university garden. This area covered with grasses also houses the two-armed ramp in order to ensure the courtyard’s accessibility. 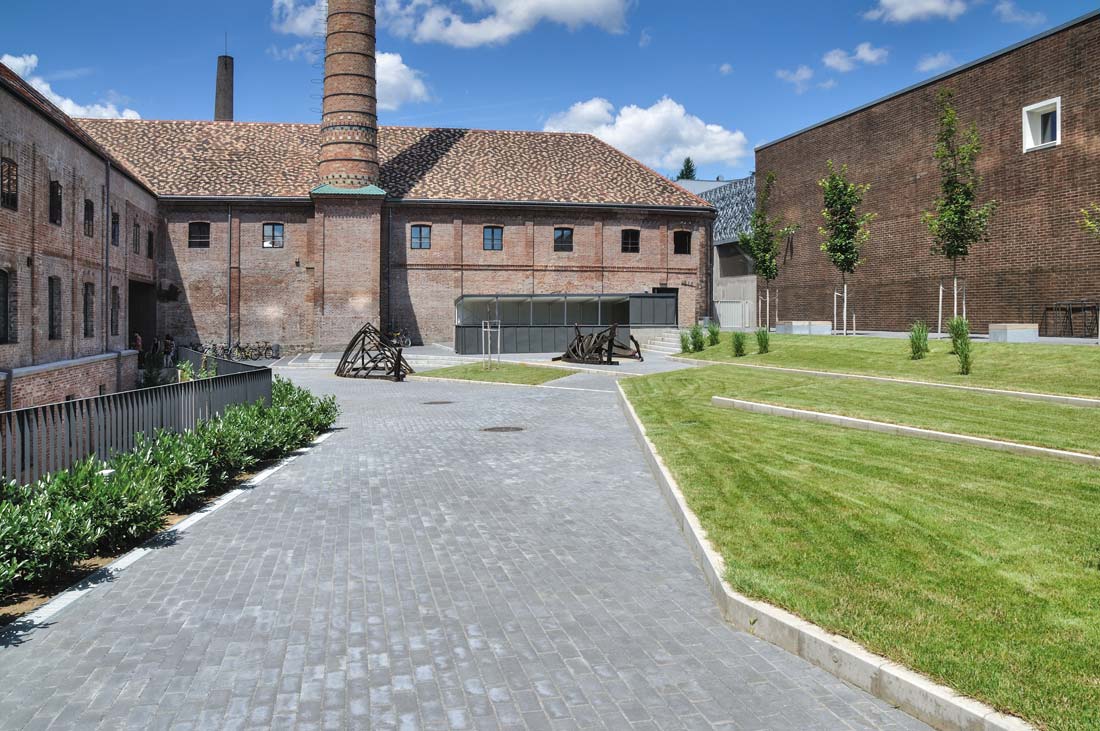 « Millenary Park: Motivation and Interaction
Recovery of the Irrigation System »