Located at the edge of central Sydney, the project was part of the reinvigoration plan of an underutilised area of 7.5 hectares in Prince Alfred Park – it contributed to this by upgrading the public pool and addressing its relationship to the park and street. The overriding design principle preferences landscape over built form to activate and make public open space in all its interfaces, rather than to produce a building ‘in’ a park. 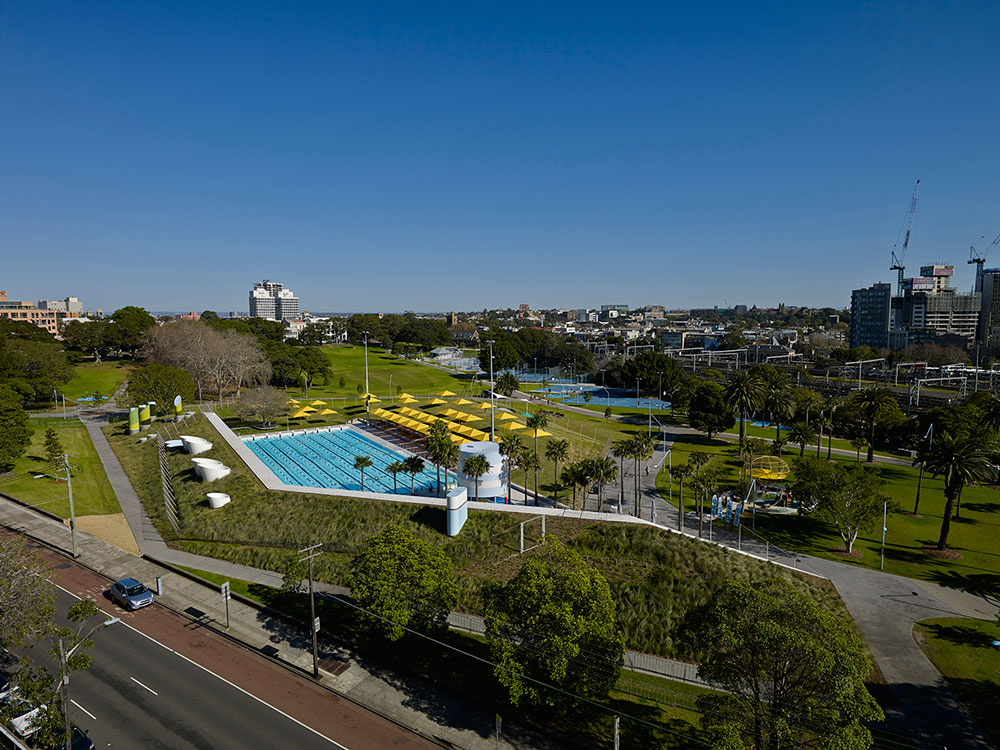 The old 1950s pool building was removed from the middle of the park, and the existing pool was renovated. This visually and physically opens up the park creating a new spatial quality and enabling a more vital ecology that connects the pool curtilage to the wider park, bounding streets, and local waterways. The site belongs to a series of urban systems – a collection of public open spaces, public pools and different recreational typologies including playgrounds, pedestrian and cycle pathways, and sport infrastructures. It sits within a greater water catchment that extends up to Surry Hills and Redfern, and down to Blackwattle Bay – the site of The Foreshore Walk project in Glebe included in this catalogue/book. Site-wide stormwater management was redefined with capture from the upper catchment for irrigation of the adjacent playing field and pool lawns, while bio-retention swales filter and cleanse the reduced flows to the harbour. New trees and an extensive understorey landscape have recalibrated the experience and sustainability of the park, the layered strata protecting mature trees from compaction and providing habitat. It is a sectional site – with canopy, ground plane and an important subterranean dimension. 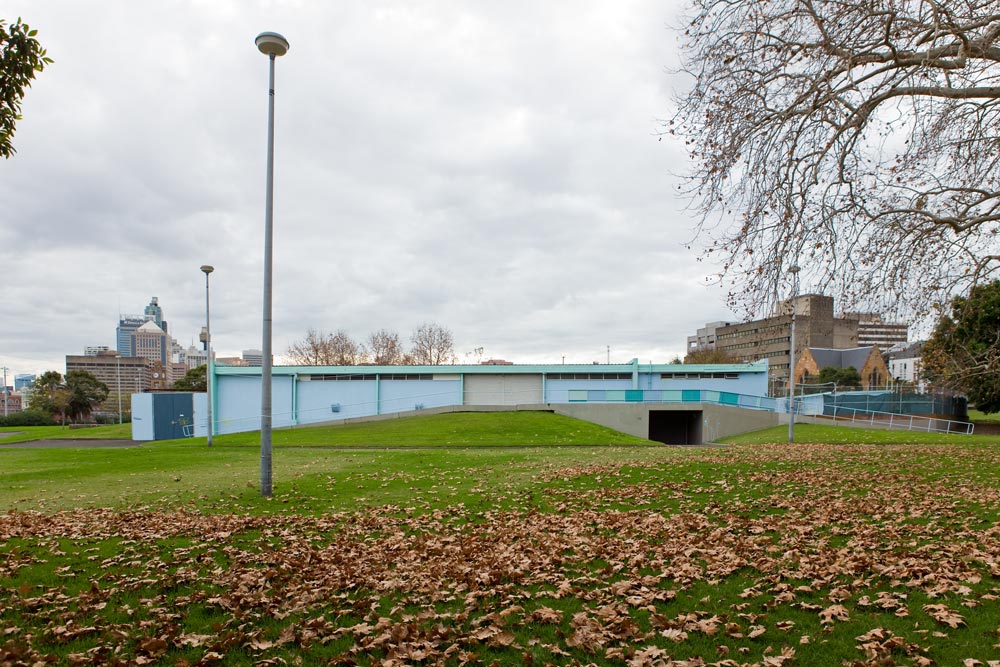 The pool prior to the upgrade. 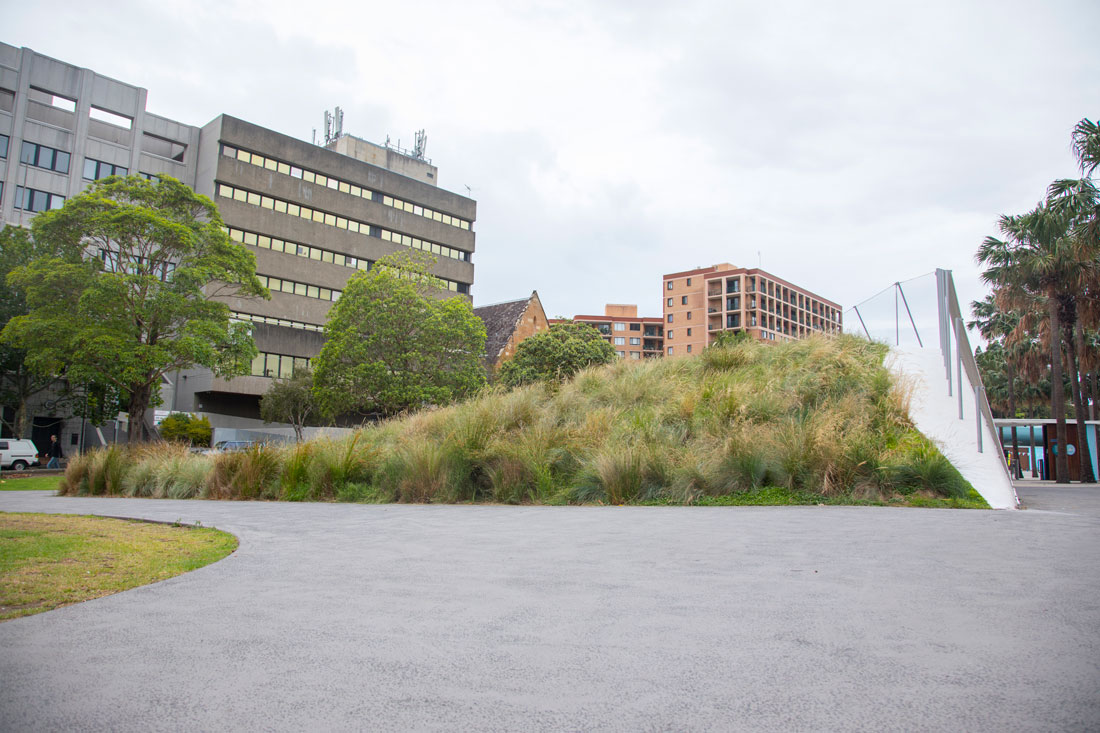 The new 1,000 square metre pool building is conceived as a ‘folded ground plane’ with a green roof of native ‘meadow’[1] grasses that connect to the surrounding park and the memory of both the former landscape and Cleveland Paddocks. In the spatial urban realm, the green roof is more a street infrastructure, or an extension of the ground plane and park, than a roof, and it is only once one enters the pool that its role as a roof is revealed: a 2,320 square metre biotic surface topped with 35,917 plants, continually transpiring, oxygenating, cooling and humidifying the site, sequestering carbon and insulating the rooms below, as well as an urban habitat for birds and insects. 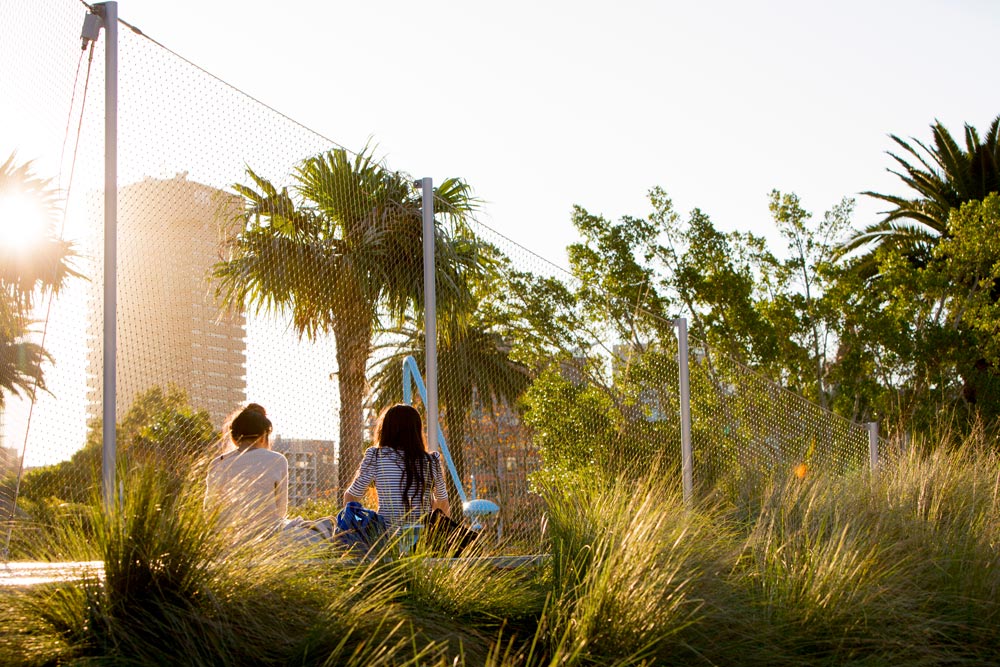 The building, 6 metre deep x 120 metre long, is intimate yet monumental, scaled to both the swimmer and the city. Two shaped landscape mounds made from contaminated fill, define the outdoor pool enclosure, simultaneously connecting and separating park and pool, while a ribbon-like fence secures the site, slipping across the topography to come in and out of view.

The landscape roof conceals the presence of Chalmers Street with its busy traffic from the actual pool, while also creating a generous streetscape to the pedestrian. The roof and grassy mounds soundproof the pool from the road, park and railway, and buffer winds, giving it an otherworldly atmosphere.

This project has positively impacted on social sustainability, local community and well-being. Prince Alfred Park was underutilised and perceived as dangerous, with a degree of criminal activity – a place to be avoided. It is now a popular, accessible, and safe year-round destination that also improves access to Central Station not only from the surrounding suburbs but also from the growth areas south of the city. 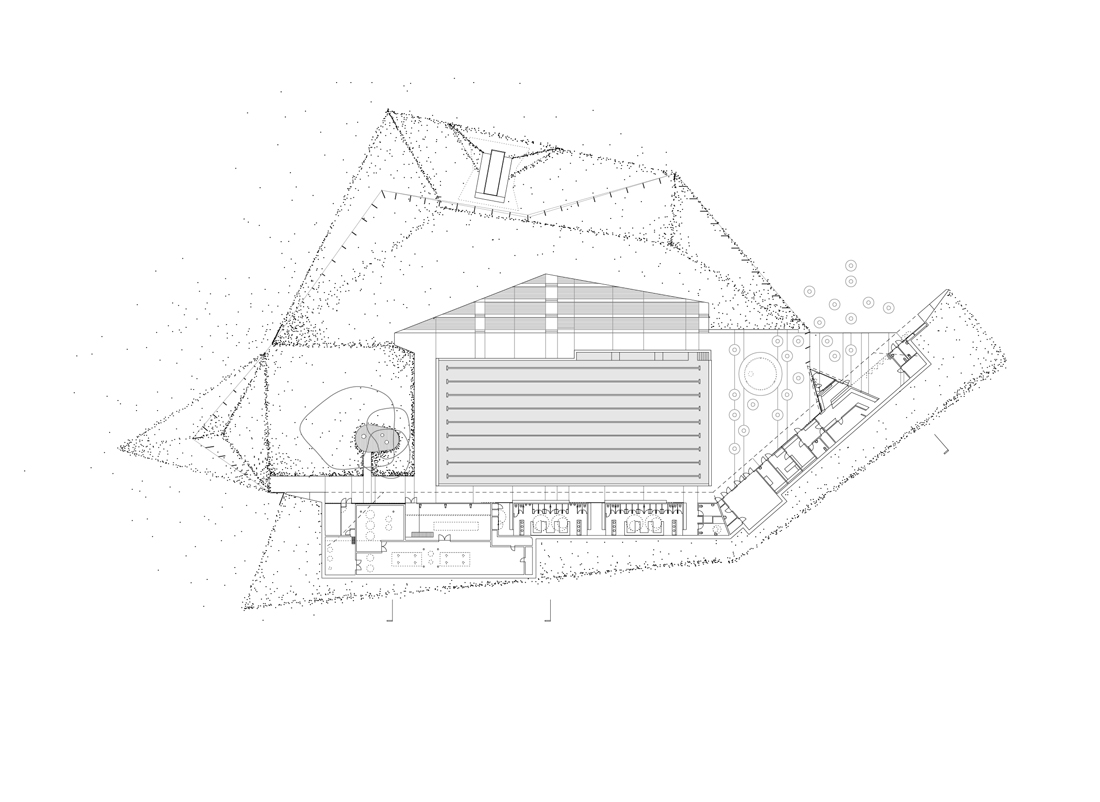 Sections B and C

[1] For a discussion on the use of the term ‘meadow’ in relation to this project see Whitworth, D 2017, ‘Do Not Mow: planting a subtle argument’, Landscape Australia, 12 October, viewed 15 October 2017, <https://landscapeaustralia.com/articles/do-not-mow-planting-a-subtle-argument/>. [2] The soil scientist was SESL and the grassland specialist was Australian Wetlands Consulting.

« Time and Trust in the City: An Urban Debate
English for Fun: A Revolutionary Pedagogical Approach »