This year, the final days of summer were crowned with the opening of New Holland Island, which has completed the first phase of its restoration and regeneration. During the August 27 opening weekend New Holland received 49,130 visitors, who enjoyed the incredible line up of arts, music, food and events. 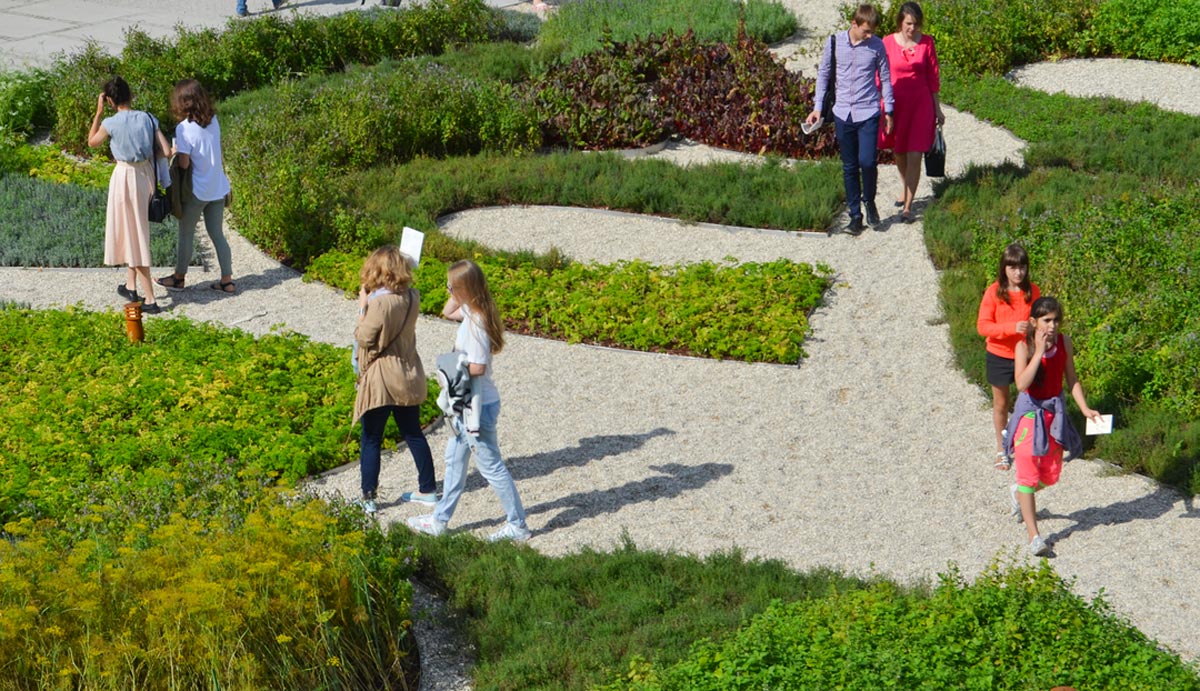 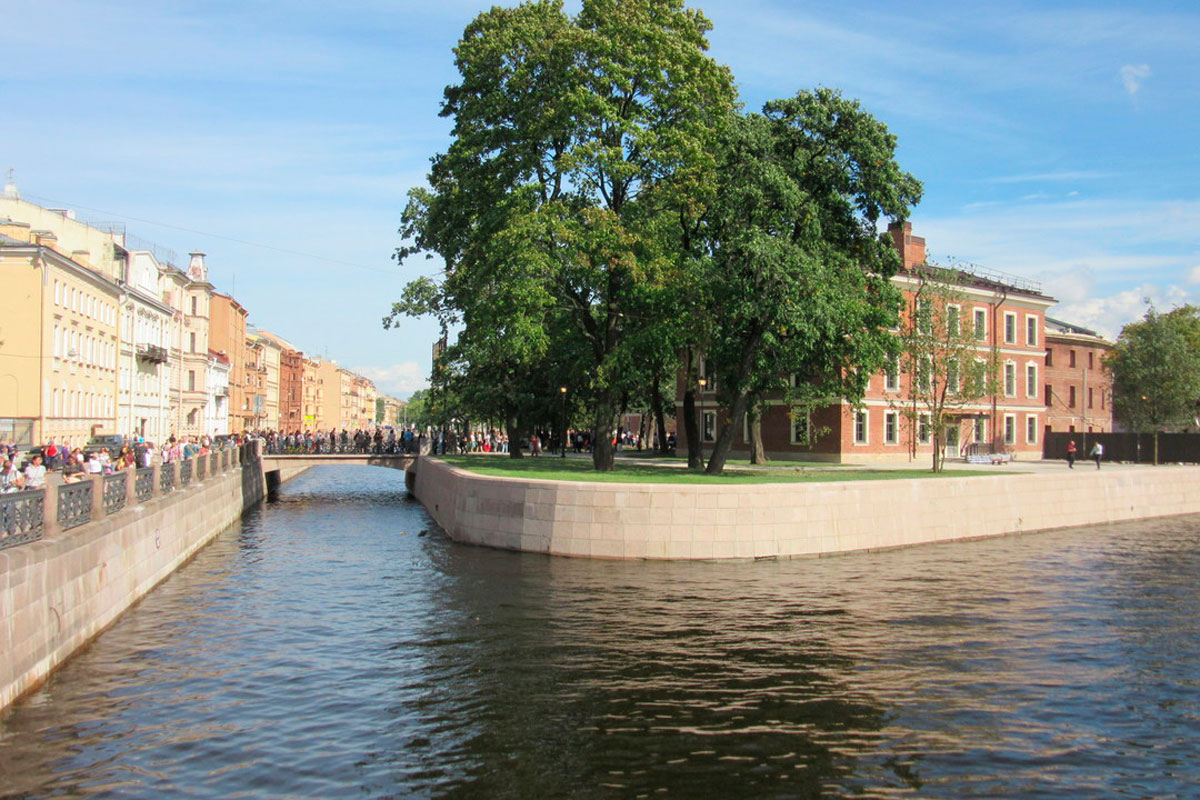 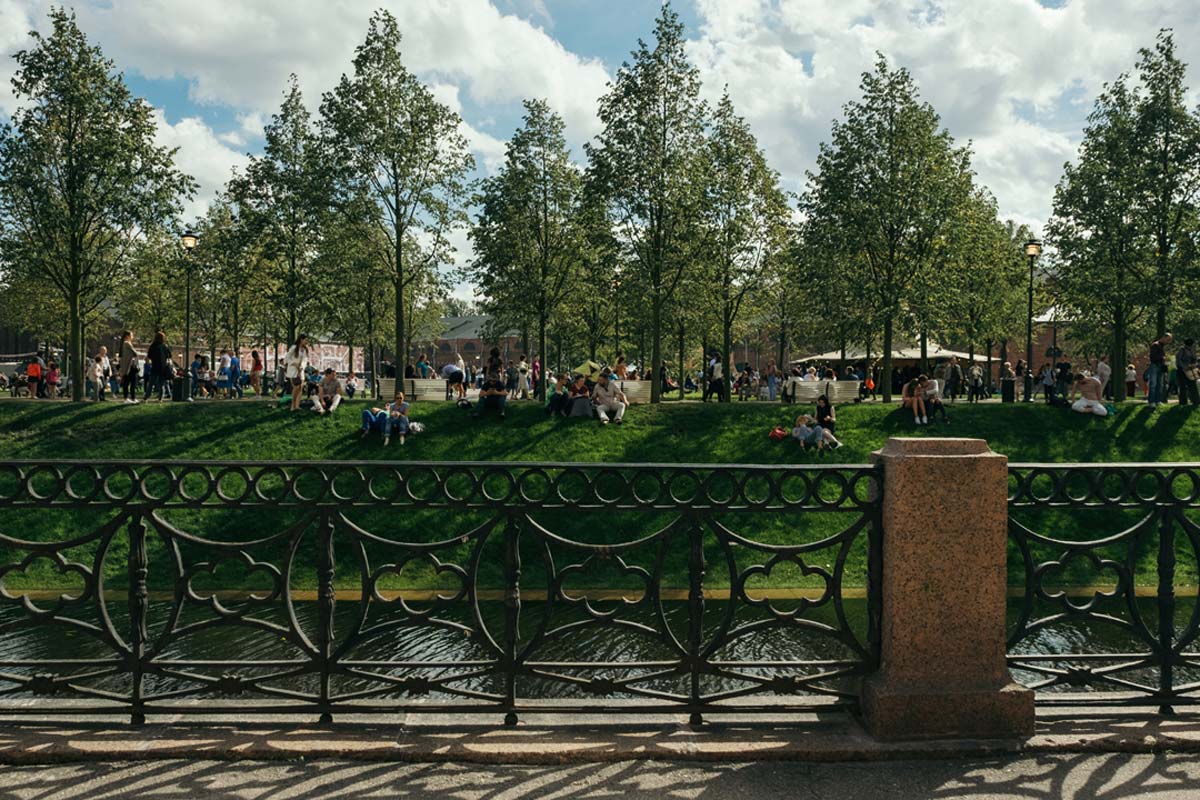 For the past three years West 8 has been working on the realization of their master plan vision and design guidelines for the renewal of New Holland Island, which centers on the creation of the New Holland Public Quarter. The goal of the plan was twofold: to restore this architectural landmark and also reinvent its role in the city, transforming the site into a multifunctional public district that welcomes the citizens of St Petersburg and acts as a public draw card for intellectual and creative forces from all over the world. 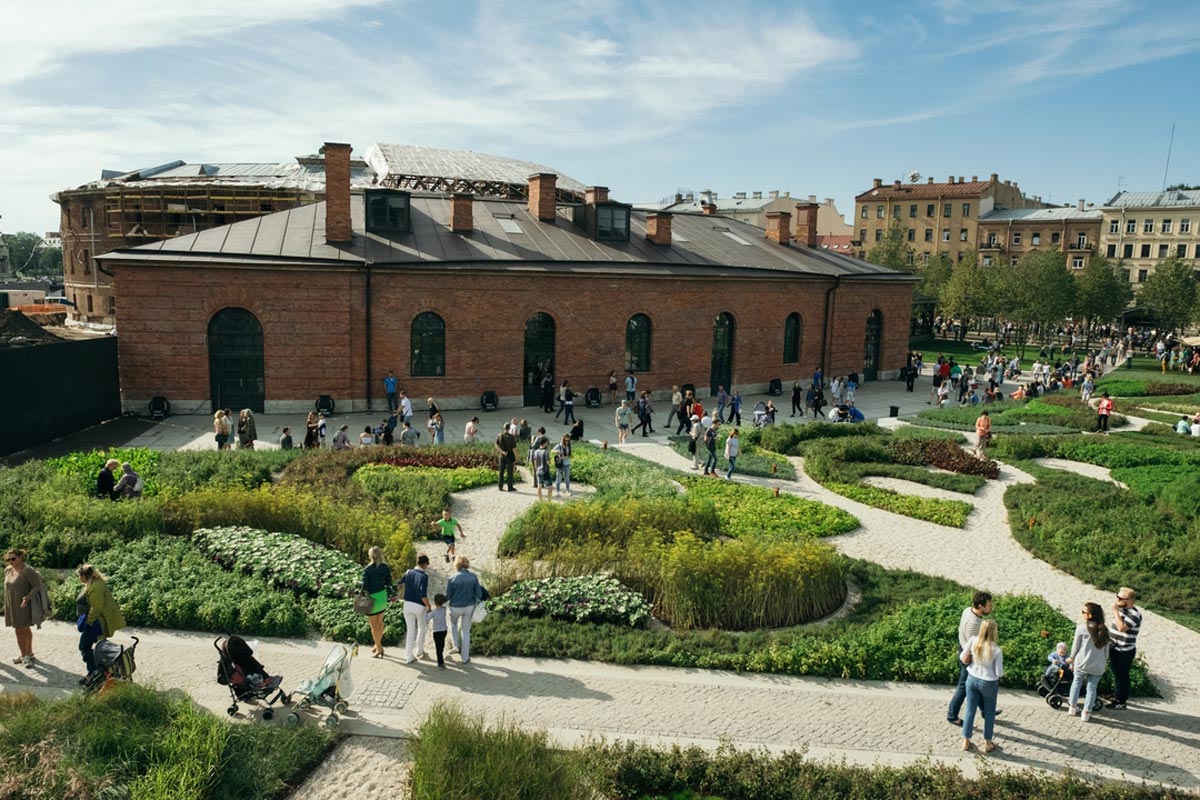 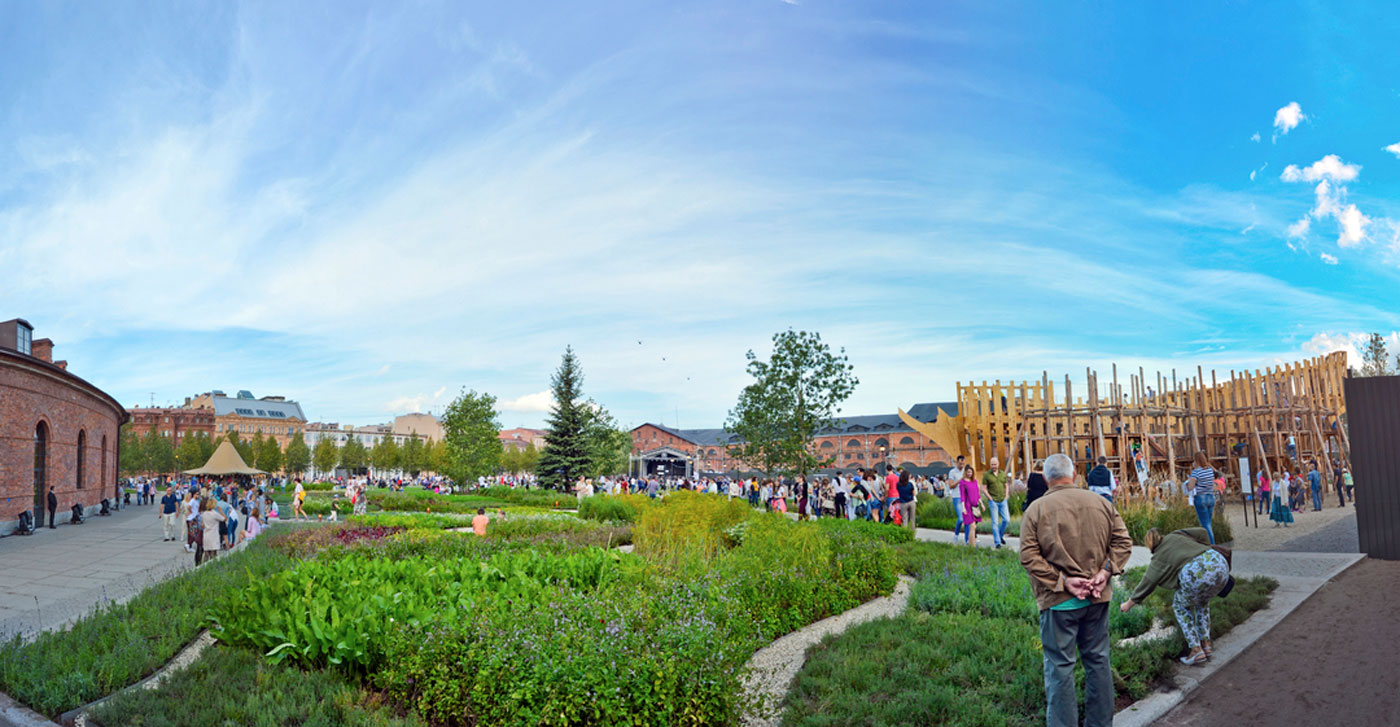 Developments completed to date as part of the first phase of the restoration and reorganization of the island include:

The organization and landscaping of park areas in the interior of the island;

The restoration and contemporary outfitting of the former blacksmith’s building (the Foundry), the administrative building (the Commandant’s House), and the old naval prison (nicknamed the Bottle);

The restoration and landscaping of the embankment of the Admiralteysky Canal and the island’s inner basin, along with two bridges;

The installation of infrastructure for the engineering and technical support of the island and continued restoration work;

The installation of lighting architecture for the park areas and the restored buildings;

A playground modeled after the historical frigate ship Petr and Pavel;

The planting of an herb garden outside the Foundry building;

The placement of temporary pavilions for hosting cultural events as well as facilities necessary for the administration of the park (kiosks, info centers, a stage, restrooms, and entrance). 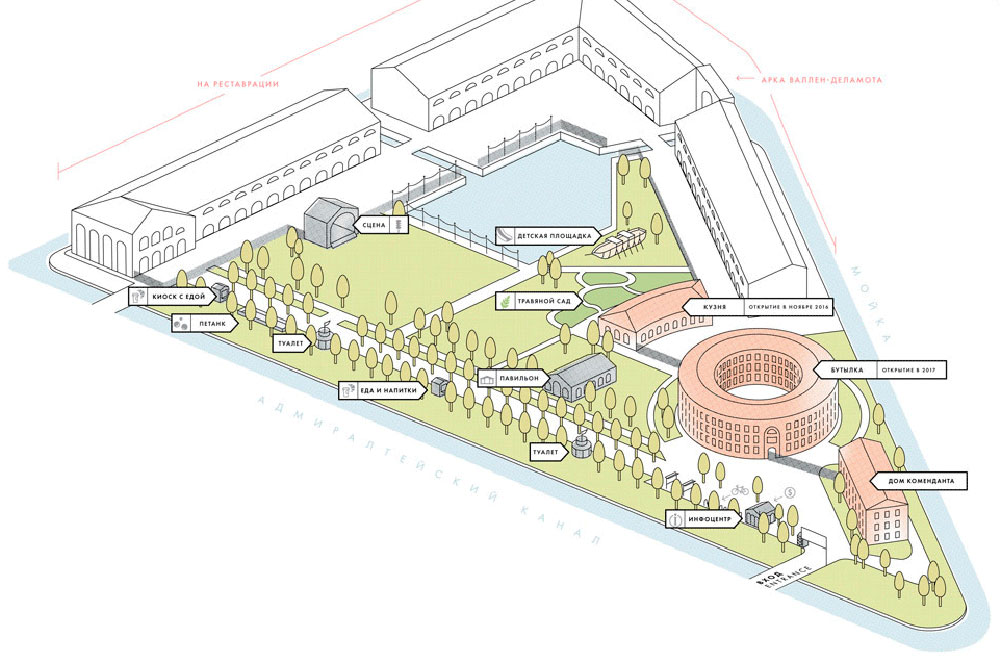 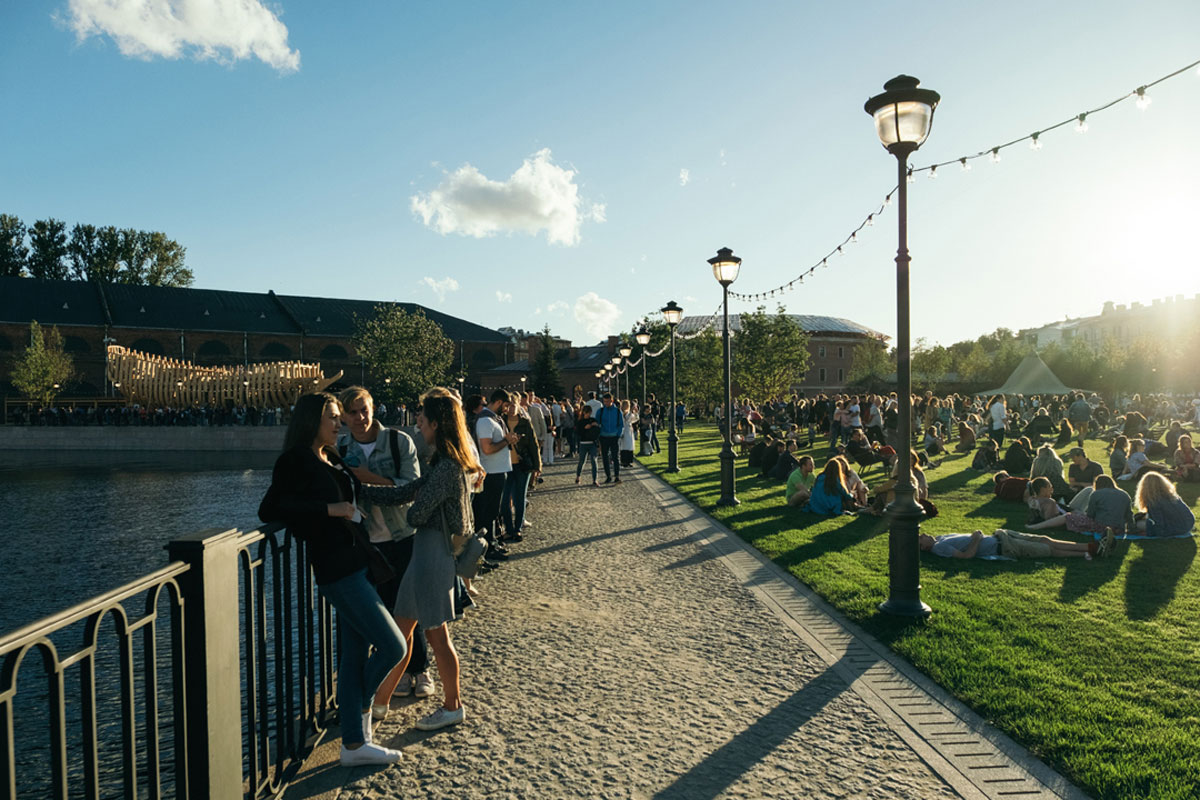 In 2010, Millhouse, LLC, won the tender for the restoration and renovation of New Holland Island. To help determine the concept and creative direction of the island’s development, Millhouse turned to the Iris Foundation, a non-commercial initiative for the support and advancement of contemporary culture and art, launched by Daria Zhukova. To implement this idea, they employed West 8 supported by Spectrum Group, Ooo Ni & Pi, SPETSRESTAVRATSIYA´, Neskuchny Sad and Richter.

This collaboration resulted in New Holland: Cultural Urbanization, a fresh approach to the restructuring and modernization of the territory, a monument of cultural and national historical significance. During the 9.5 months of the experimental summer programs on New Holland, the island received more than 700,000 visitors, 90% of whom were residents of St Petersburg. 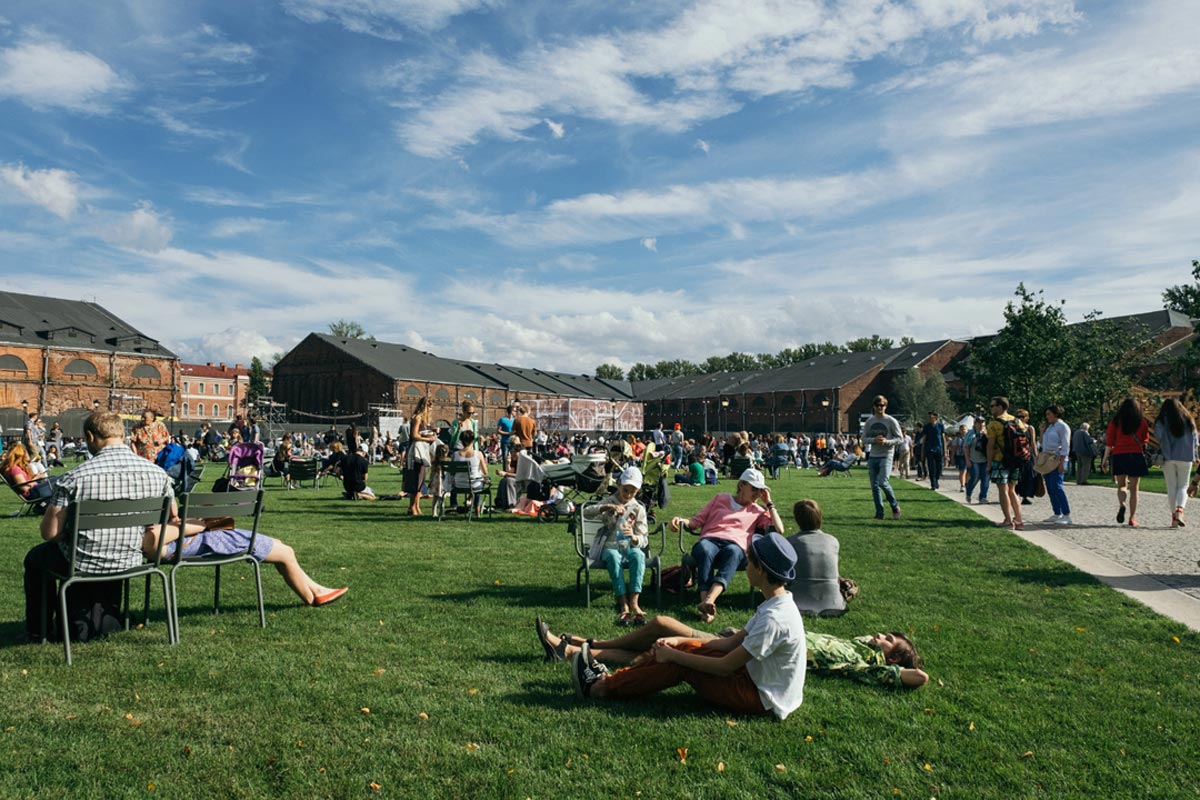 Following the success of the seasonal programs, the project investors decided not to proceed with the original plan to clear the territory to construct a new building. Instead, they chose to organize a full-fledged city park, complete with a modern and convenient infrastructure, where each and every person could find his or her place.

The island continues to host cultural programs as well as large-scale civic initiatives. Future plans for the development of the territory include not only commercial enterprises, but also cultural and educational institutions, research laboratories, and exhibition spaces, whose programming will be overseen by emerging specialists. In August 2016 the first phase of the project launched. This included the landscaping of park areas, featuring temporary pavilions along with a system of engineering solutions and networks necessary for the implementation of the project, as well as the public debut of the first restored buildings.

Later on in 2016 and 2017, these buildings will be joined by the Foundry, the Bottle and the Commandant’s House. For the very first time in the island’s existence, the territory will be open to the public all year long, including the winter season. 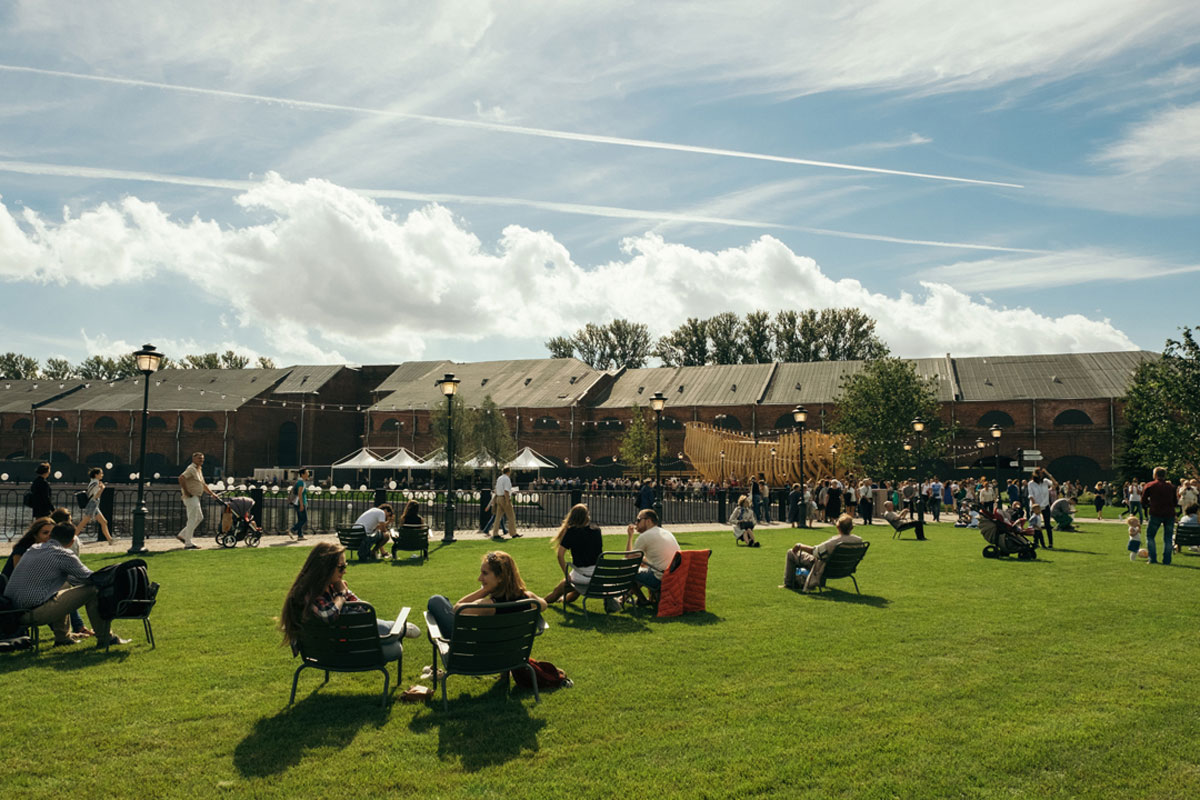 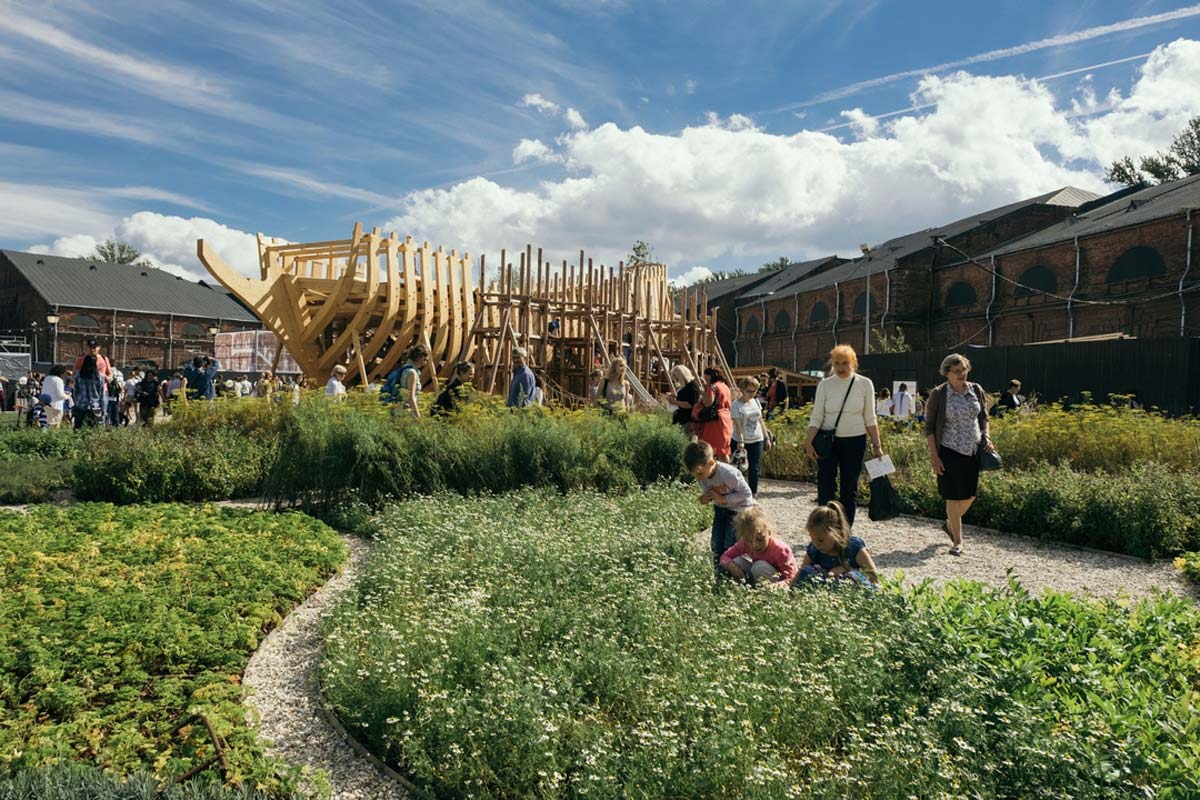 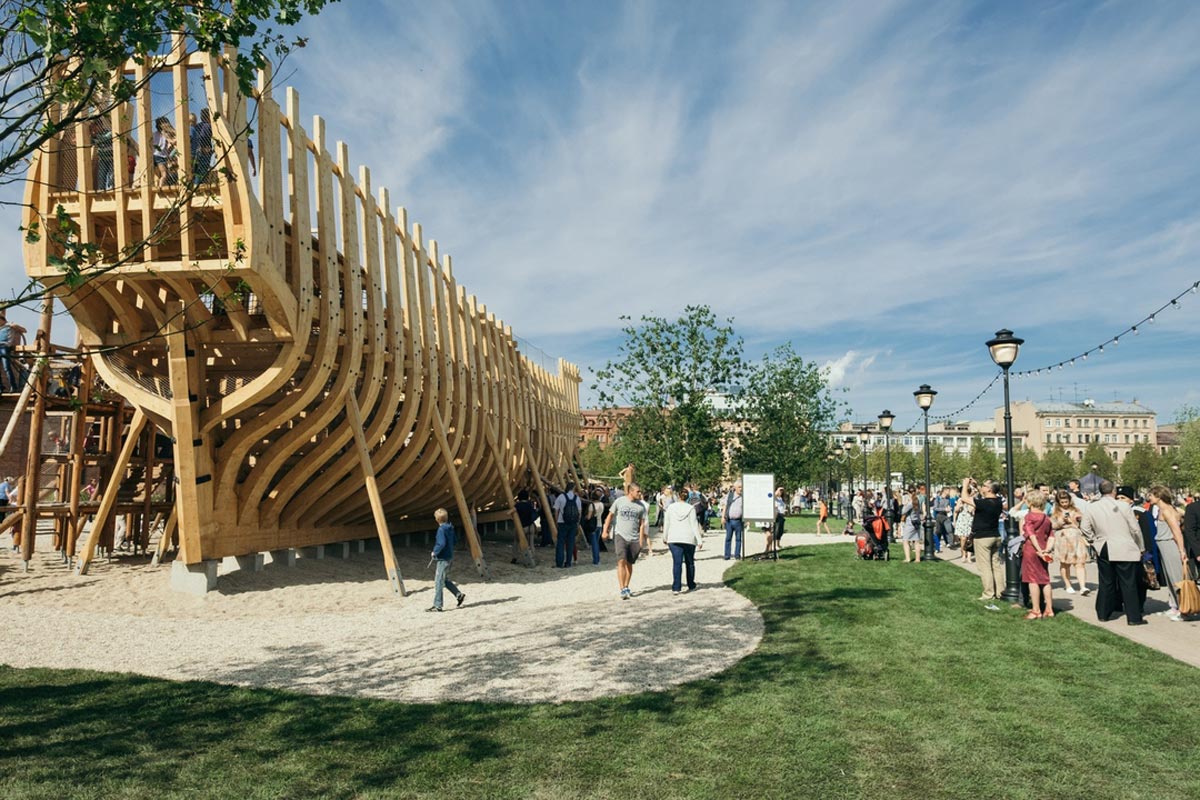 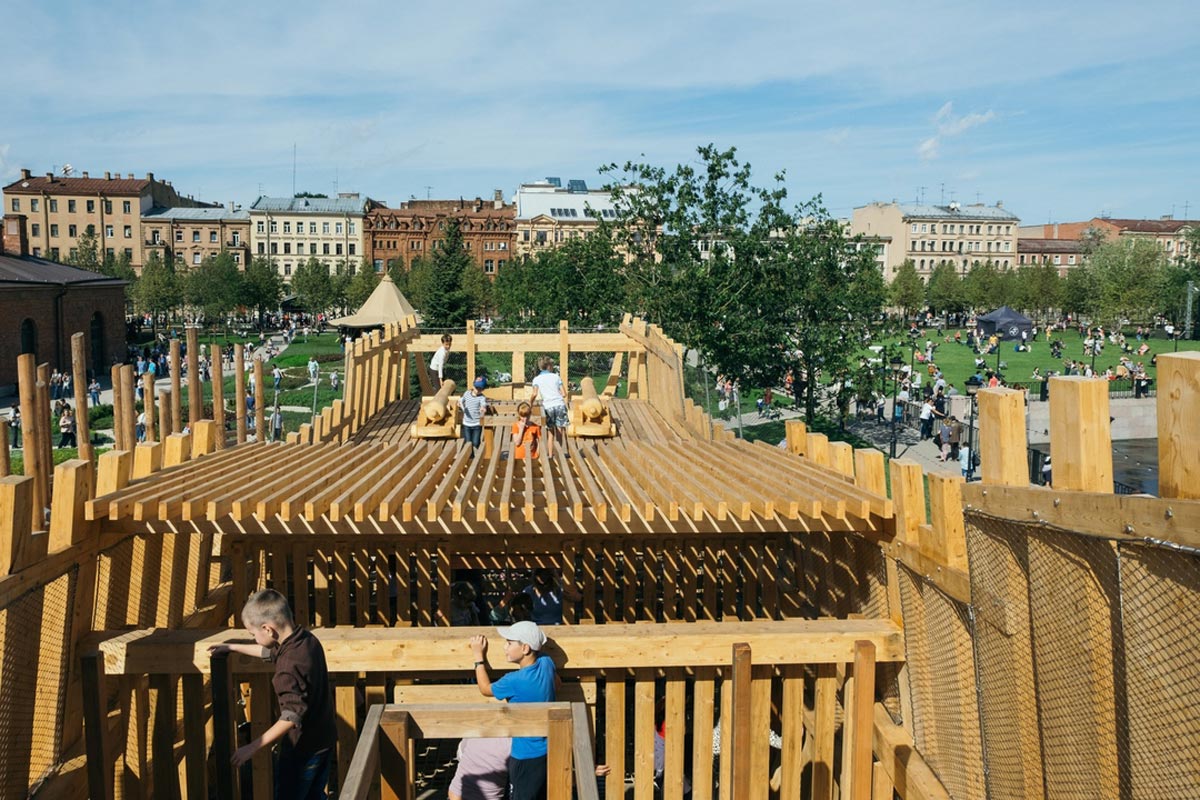 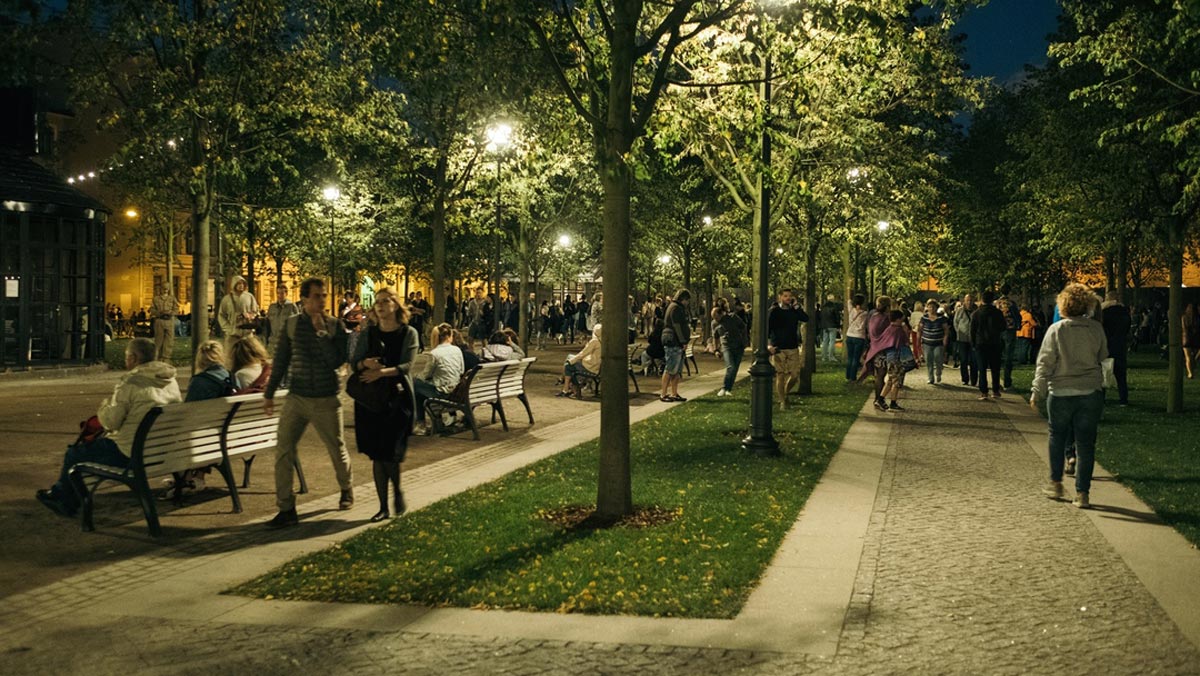 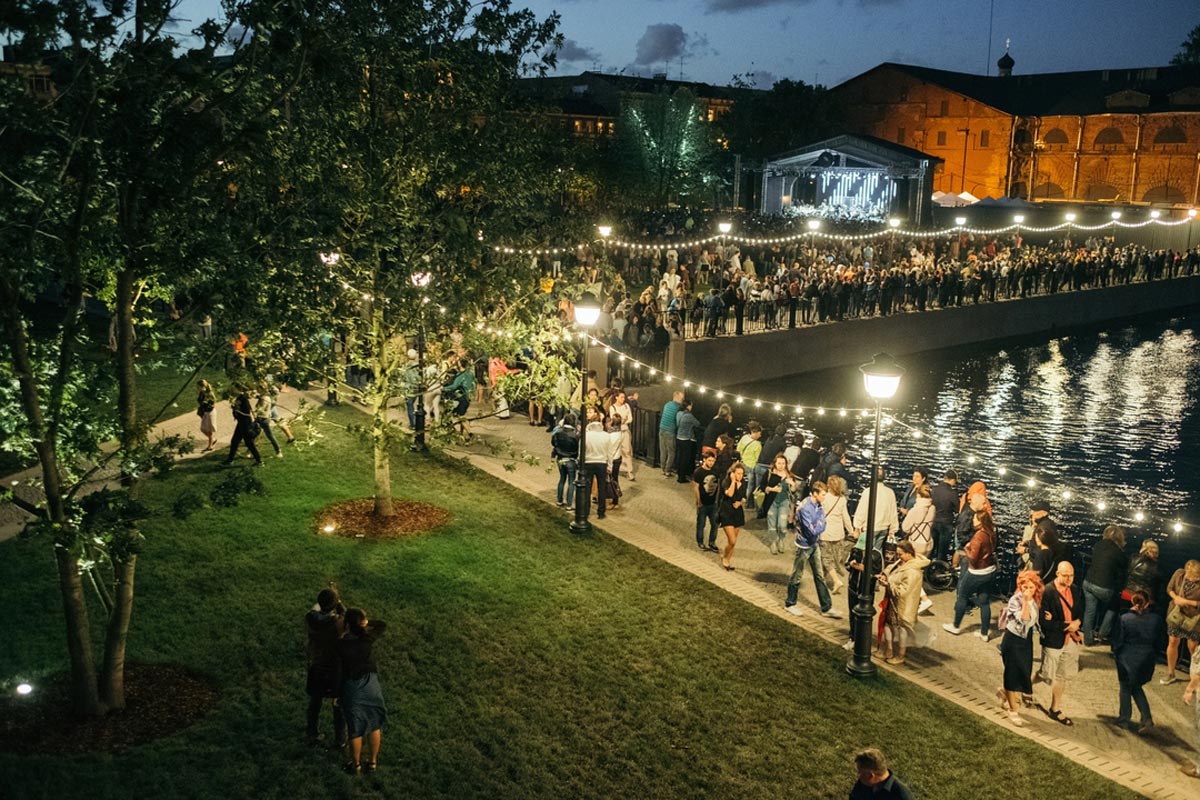 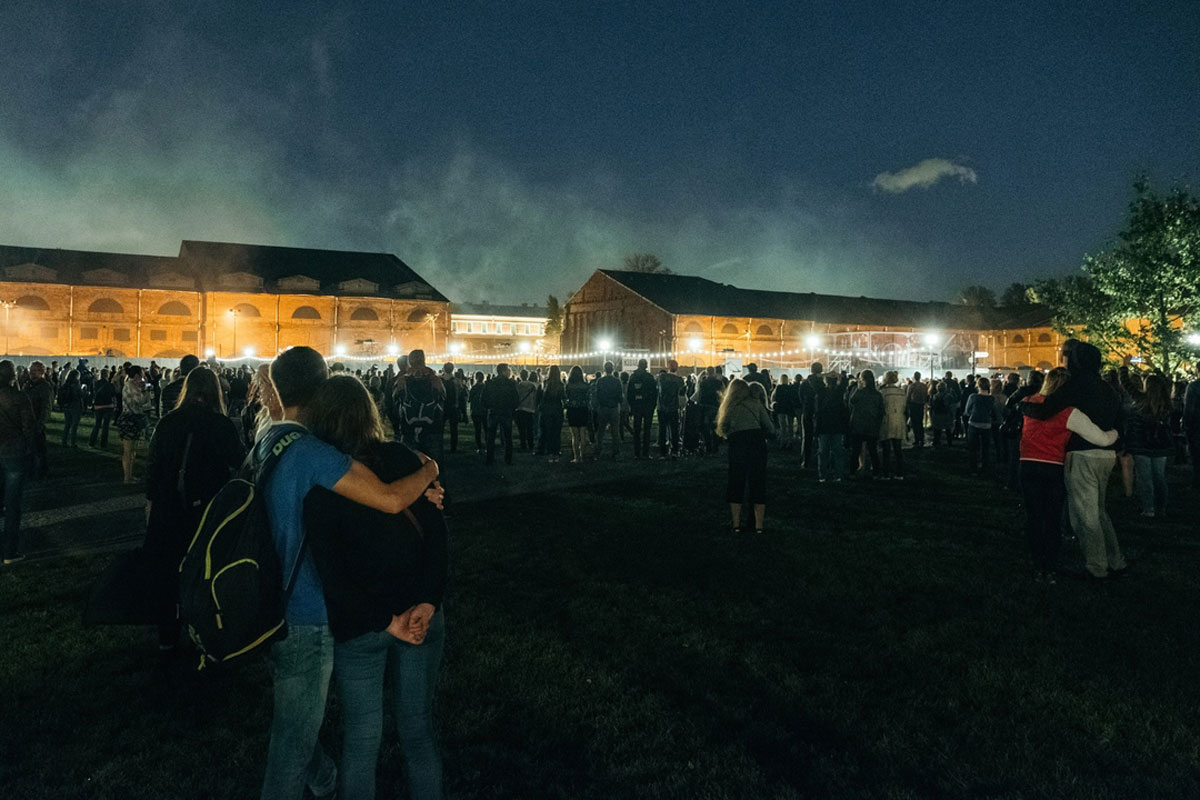 « Trash Track
On his Practice »