Millenary Park is an 8.6-acre park situated near the heart of the commercial and residential district of Buda. Prior to its redevelopment in 2001, the site was an abandoned and contaminated factory complex where mechanical and electrical parts were manufactured. As the city slowly grew around it, the need for its restoration became clear.

Millenary Park has become a model for modern, outdoor public space in Budapest. Very few new public parks have been built in Budapest over the last century due to the country’s historical political unrest, and the parks that remain consist of formal gardens with defined pathways.

The central theme used in the landscape architects’ design was ‘human creation.’ The park itself is designed based on the temporal process of creation – divided into two parts. The first stands for ‘motivation’ and the second for ‘interaction’.

In the motivational part you find yourself surrounded by a normal urban and natural environment, but in a totally unusual form. All park elements, such as the grass, the benches, the grape vines, the apple trees, the wheat field, and the trees in the lake, aim to act strikingly upon the visitors to inspire them to take notice of and look at their surroundings in a different way. The glass corridor is conceptually the key element of the park. From within, we see our environment as an exhibited object that we have absolutely no contact with. It is a call for interaction: our responsibility to take part in shaping our future and our environment, which is our democratic right.

Leaving the motivational part you reach the interactive space, the playground of creativity. Here, you can find environmental elements in mobile form – movable park elements in boxes – and are invited to create your own actual surroundings. All of the park elements aim to motivate the visitors to interact with their surroundings in a different, cozier way as opposed to the usual, more formal way of behaving in a park. The possibility of use lies in the hands of visitors, who are able to mould the space to meet their needs.

The overall goal of the park’s design was to establish a place that was flexible in its use and allowed visitors to create a program for themselves. The improvisational nature of Millenary Park is a fresh approach to public spaces in Budapest and is reinforced by the blending of indoor and outdoor spaces in the park. The rehabilitated factory buildings seem to extend out into the park space, and the outdoor concert hall and music pavilion blur the line between indoor and outdoor activities.

Millenary Park is approached from the west by a short walk from a central transit hub. Magnolia trees and geometric shrubs emerging from the limestone surface greet the visitor at the entrance to the reception building. A central, 0.5-acre pond creates a visual anchor point for the main spaces within the park. Trees seem to grow from beneath the water, emerging above the surface as majestic symbols of life and energy. Steel bridges over the pond connect the main spaces. A music pavilion lingers over the pond’s surface. The pavilion’s form creates a vertical extension of the irregularly formed edge of the pond below it.

The southwest corner of Millenary Park is divided into a number of intimate spaces by a series of intersecting hill lines which seem to ripple up from the surface. Following the contours of the hills are a vineyard and a wheat field, which evoke the historic land uses of the surrounding area. A glass corridor cuts diagonally through the entire space. Large labradorite stone benches are pushed into the hills that line the crushed limestone pathways.

The northern section of Millenary Park is informal and flexible. A series of intersecting grass benches with corten steel siding sit within the space. Next to this green area is a plaza where some of the original rail lines used by the factory still lie. The rails now serve as tracks along which custom-made tree planters can run. Bordering the plaza to the south is the pond’s 230-foot-long waterfall. Water flows over the two-foot stone wall onto a stone and gravel bed, drawing visitors to its edge. 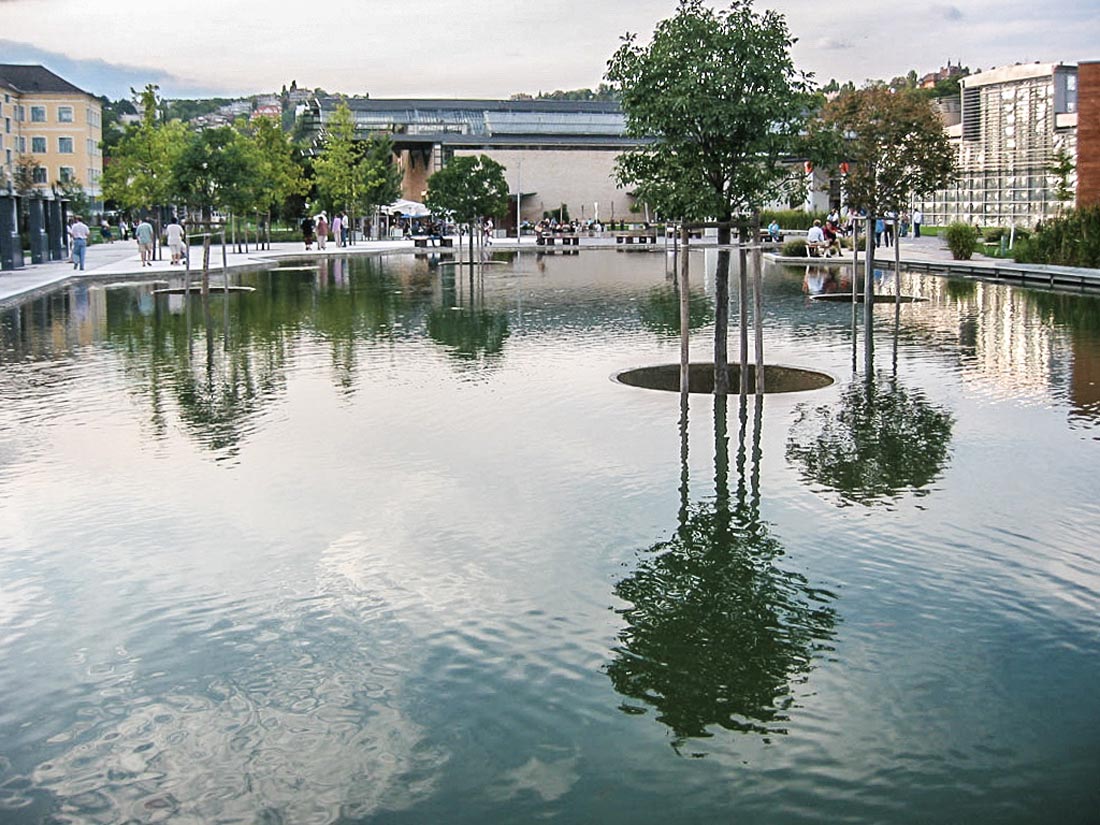 Millenary Park met several environmental needs in this area of Budapest. The former factory site on which the park now sits had highly contaminated soil and groundwater. A drainage system was installed to remove the underground pollution. Rainwater was collected in drainage pipes along with the contaminated groundwater. This water was then removed from the system and clean water was introduced into the groundwater system. The process to completely remove the toxins took six months.