Les Ballets C de la B and LOD: Two Buildings for One

The production studios for the dance company LES BALLETS C DE LA B and music theatre company LOD are situated along the Leie River. The Leie River connects the ancient abbey and hospital site of DE BIJLOKE with the historical centre of Ghent, about a 15-minute walk away. The production studios are part of a larger ongoing plan for the Bijloke site which was initiated by the city of Ghent 10 years ago. The hospital function moved elsewhere some 20 years ago, after hundreds of years of presence on the site. The Ghent plan is to convert this valuable heritage into a campus for the arts. Since the start of the project, a concert hall, a new municipal museum and the SCHOOL OF ARTS have become leading occupiers of this site. The Ghent-based international theatre companies LES BALLETS C DE LA B and LOD were also invited to relocate to the new BIJLOKE ART CAMPUS. 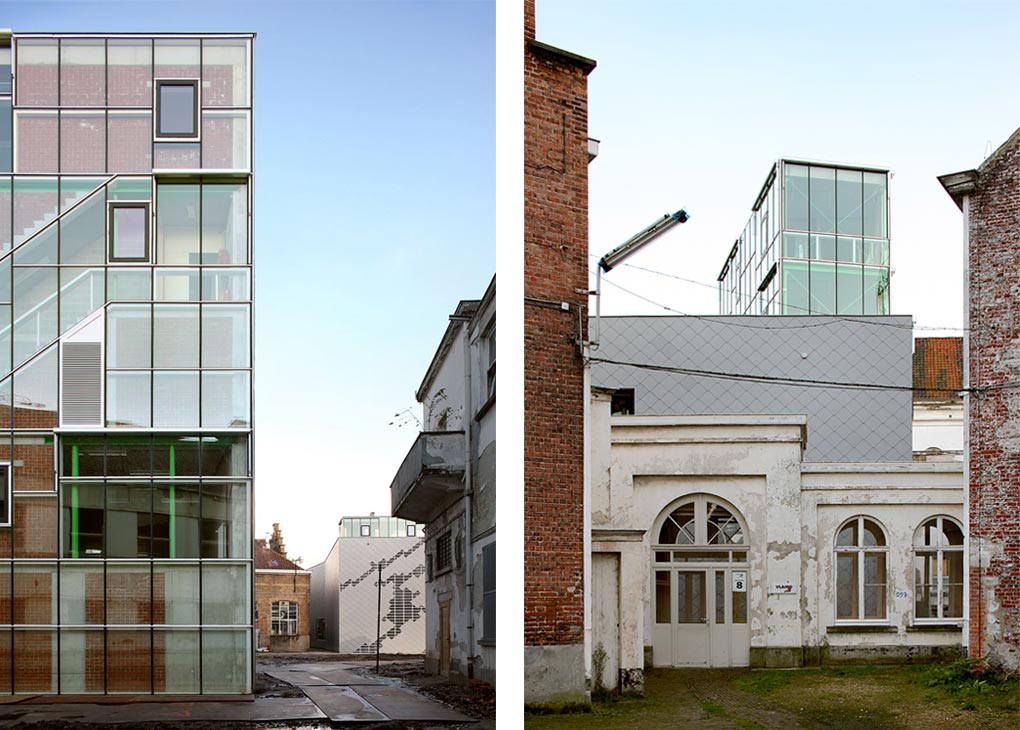 LES BALLETS C DE LA B and LOD were assigned a location on the southern flank of the arts campus, on the bank of the Leie River. The site is a bafflingly complicated polygon of land, largely surrounded by the rears of existing buildings. Still, it presents possibly the most beautiful view of the whole campus, flanked by old plane trees with moonlight over the Leie River. On the left the beautiful façade of the former maternity ward sets the line of the frontage on its side of the CAMPUS. 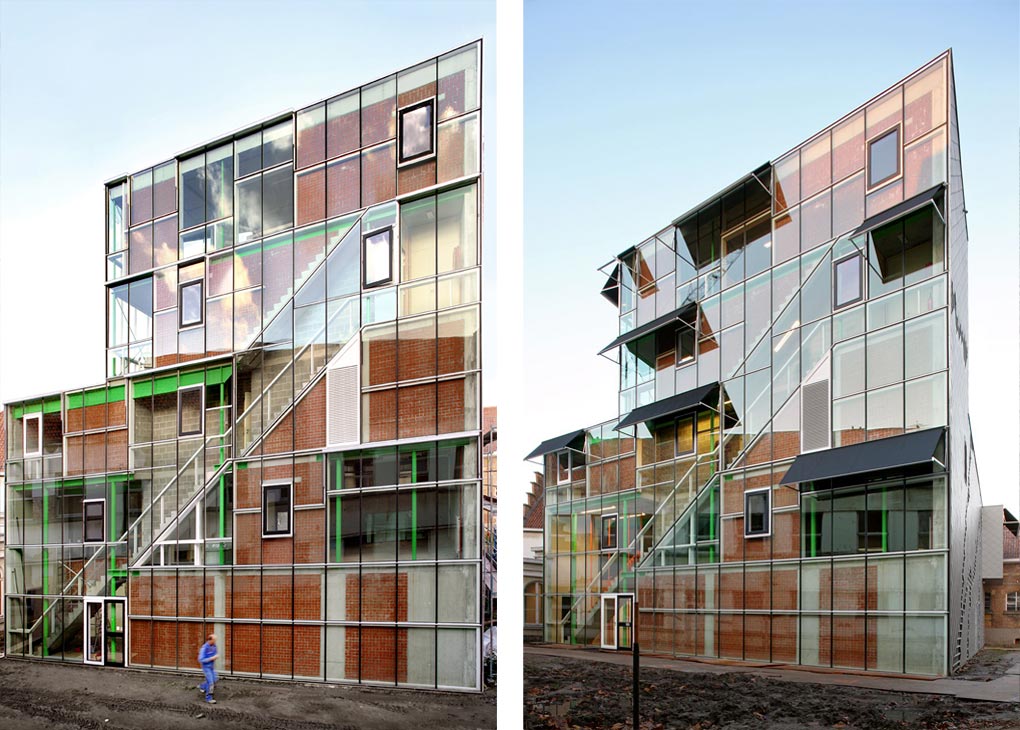 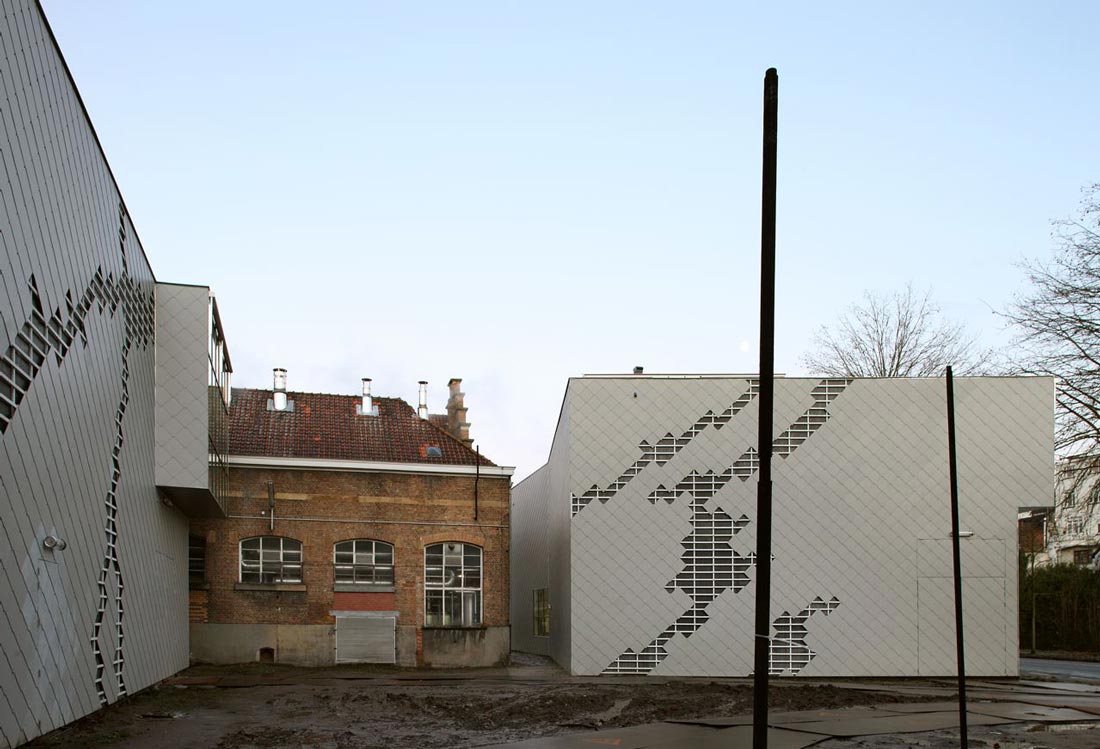 Two buildings here attempt to do justice to the ambitions and the site. The two almost-identical buildings, in a point-reflected configuration, do not claim the space entirely for themselves but unexpectedly open up a large part of the place towards the water. The buildings thus present an open space where none was thought possible. Buildings that are capable of doing this kind of thing justify themselves.

No less unexpectedly, these buildings try to show what they cannot be expected to show. Production is meant to take place within a conceptual black space, the space that frames the other world that theatre wants to be. A closed box is expected when this idealized black space has to be realized in material form. Here, however, the ancillary spaces, in other words the secondary programme, are utilized to give these buildings an unexpected openness. 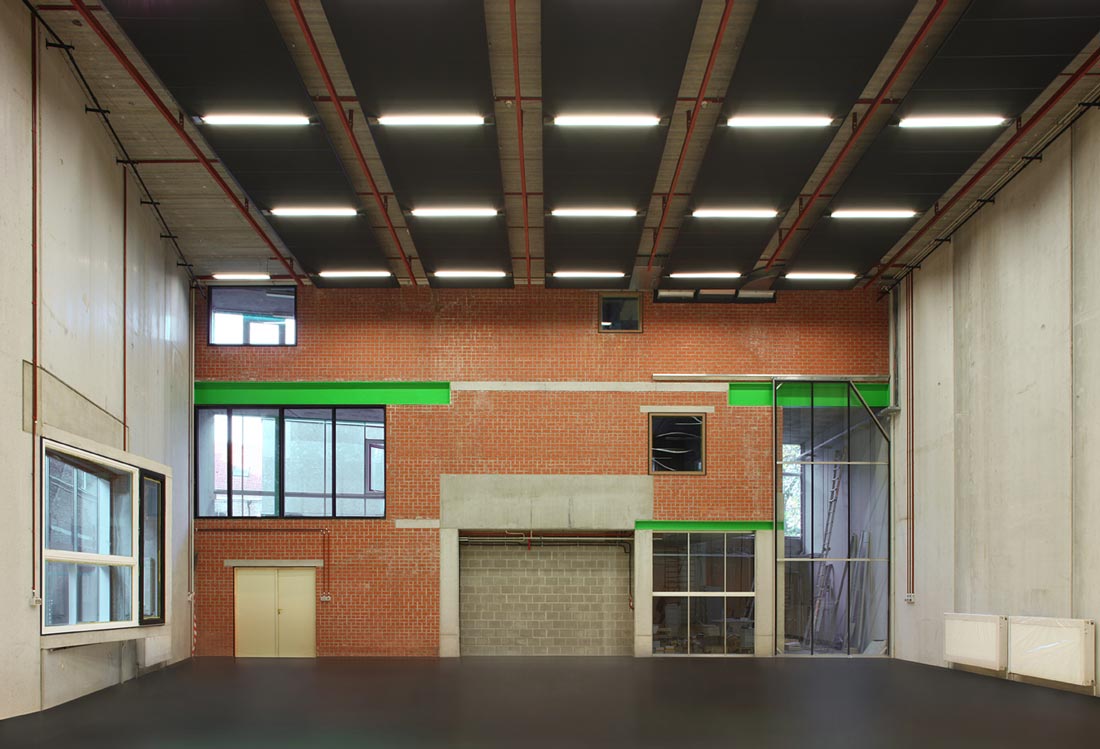 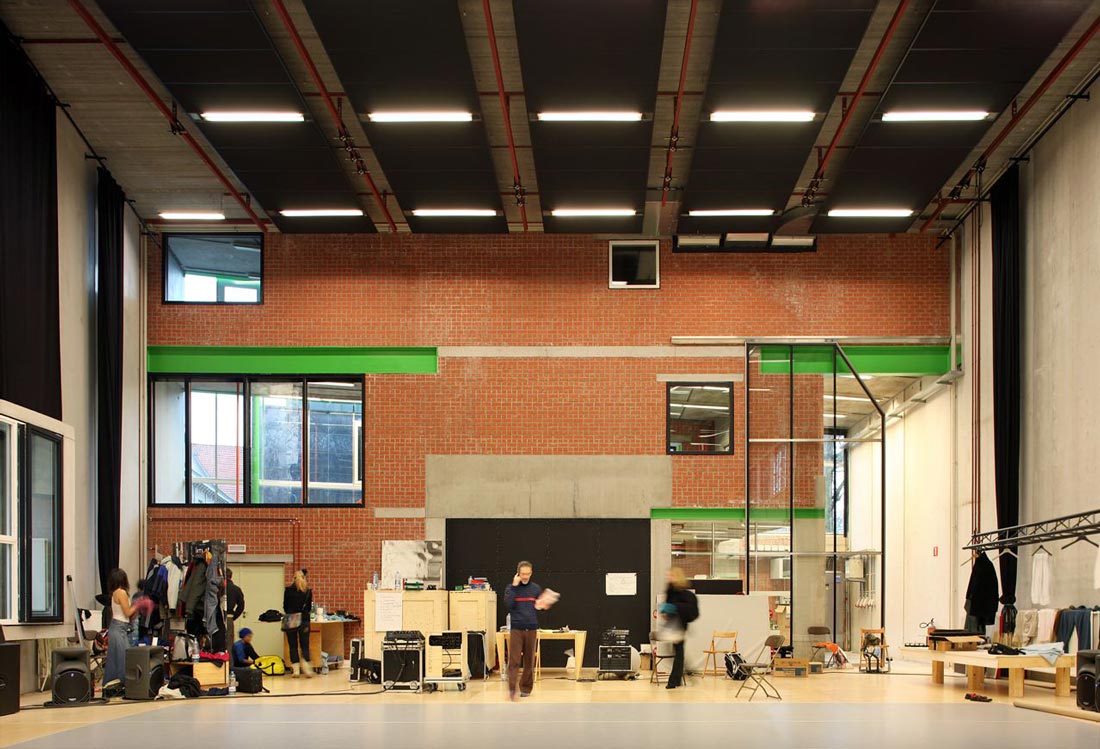 The architecture of the open façades suggests pure design ambition. In actuality, their appearance is the result of orchestrating pure engineering: the visible structural dimensions are exactly as calculated instead of being made to conform to standardized units. It is this structural method that gives them their unexpected character.

The material paints the façades. The colour of bricks. The colour of concrete. But also the colour green, simply beautiful green. White lines draw everything together. Just like the sketch on tracing paper which decided the façade, on which the connections were drawn in white ink.

And the closed façades behave like the open façades. Where the closed façades are later made to become green façades, they do not support the vegetation by means of additional structures; they simply use the structure required by the façade. The green façade was designed in collaboration with the landscape architect Bas Smets and is the visual keynote of the whole project. 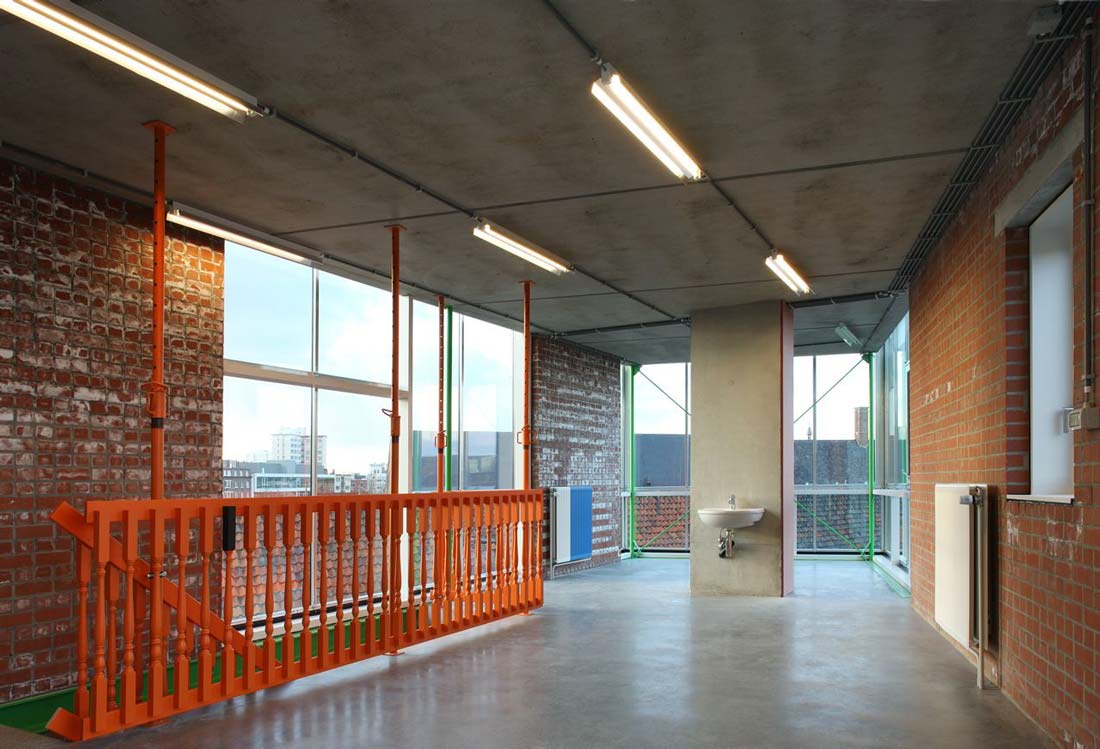 LES BALLETS C DE LA B and LOD initially expected one building with two studios; they received two buildings, each with one studio, which was better suited to the purpose. Two separate islands orient themselves around an open space, which is in turn oriented towards the water. Roof terraces allow you to look along the river and back over the roofs of the surrounding buildings to DE BIJLOKE, which extends toward the north.

The city breathes in a new place along the water, which gives life to the city as it always has. 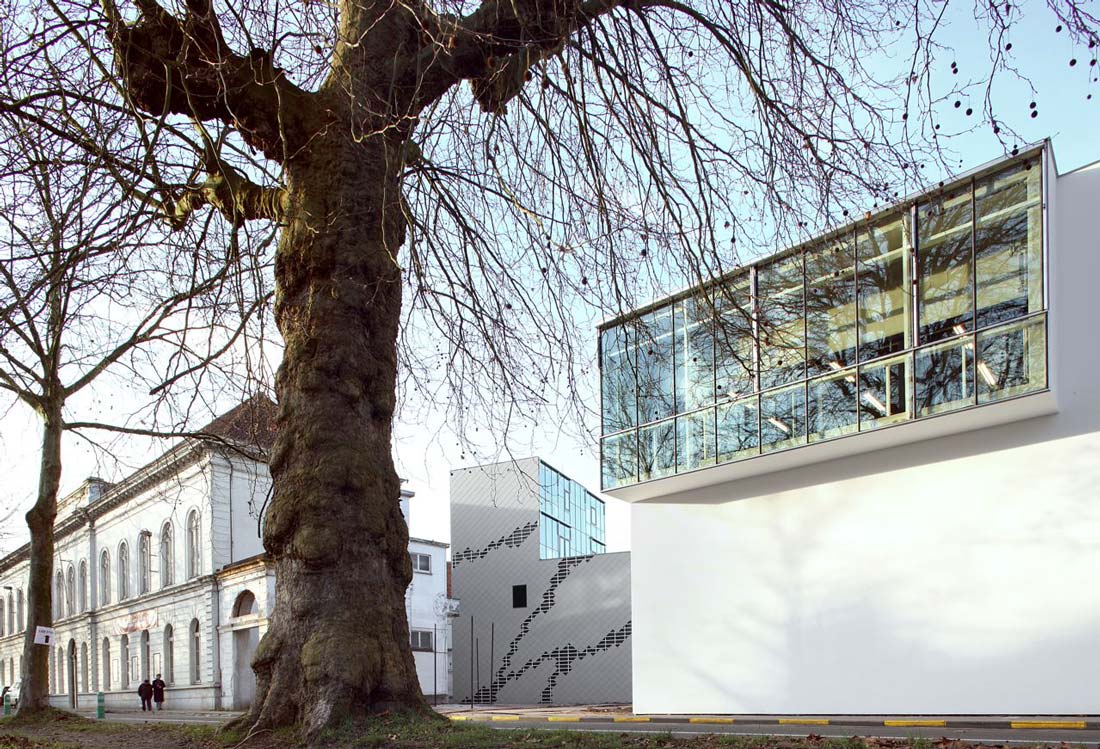