Designers have completed construction of the Lahofer Winery in the Czech Republic. Nestled in the Moravian countryside, the winery fuses the region’s longstanding wine tradition with a contemporary design rooted in community-building and engagement with local and international visitors. Emulating archetypal wine cellars of the region, the vaulted structure rests on a grid of arched beams housing three distinct interconnected structures. The production facility, reflective of modern wine-making processes, lies beside the visitor center and tasting room. Acting as a mirror of its shape, the notable undulant roof serves as an amphitheater for cultural events open to the public, merging the winery into the ground – and the culture – on which it rests. 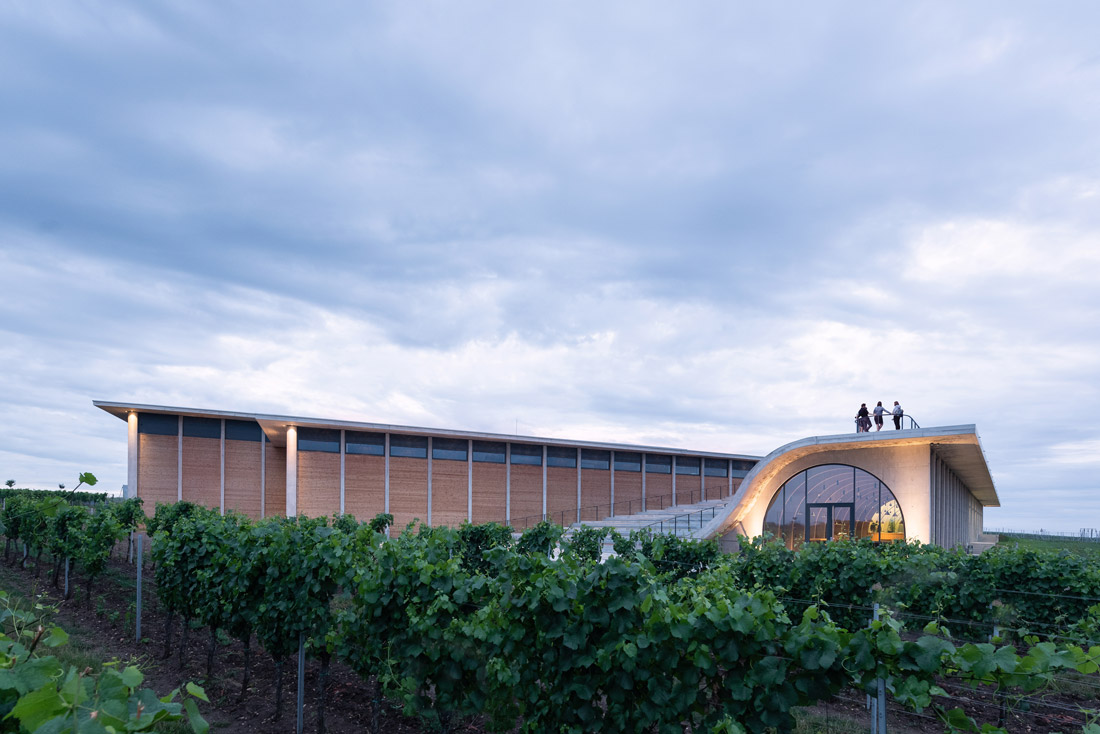 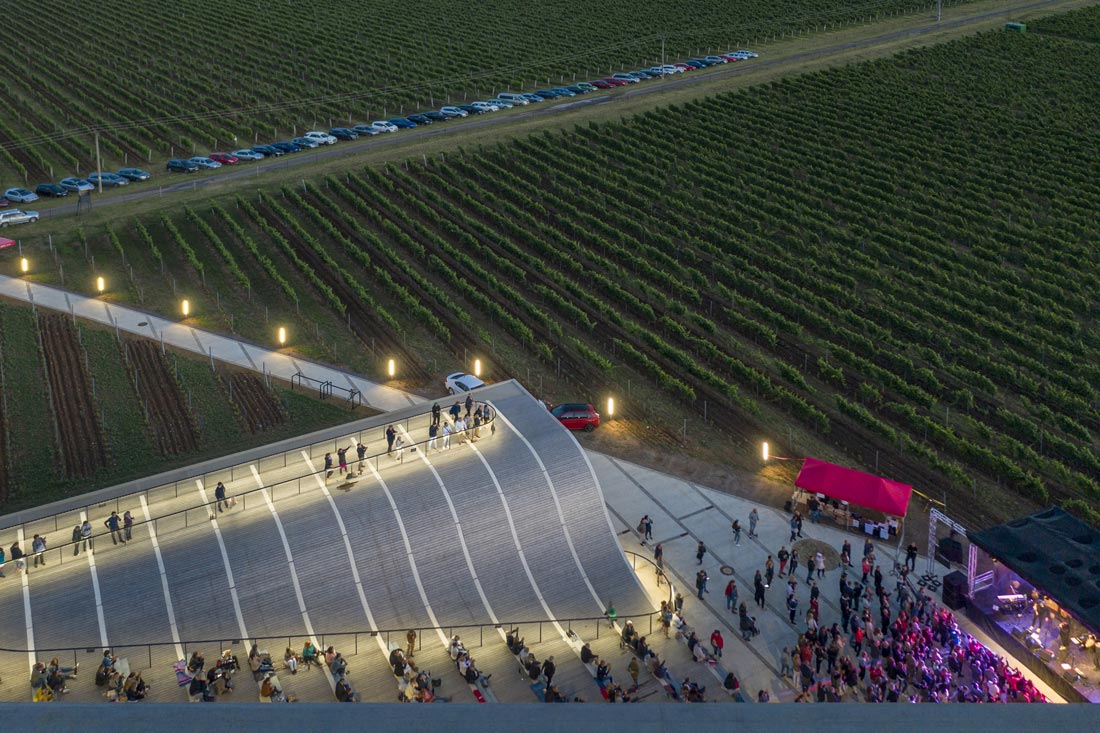 CHYBIK + KRISTOF’s project finds its roots in the legacy of the Lahofer Winery – one grounded in a storied cultural heritage and a profound respect for the natural environment. Responding to Moravia’s topography and architectural tradition, rooted in the culture of wine, the architects conceive a design in symbiosis with the region’s landscape. Reminiscent of the region’s characteristic arched wine cellars, a colonnade of vaulted beams frames the interior space with its storied curve. On its exterior side, draping the winery, an undulant roof acts as an inclined open-air amphitheater and cultural venue. Lightening the volume of the building as it rests on the fertile soil, below lie three separate spaces; each attributed with a distinct function, they share a constant concern for the adjoining nature. 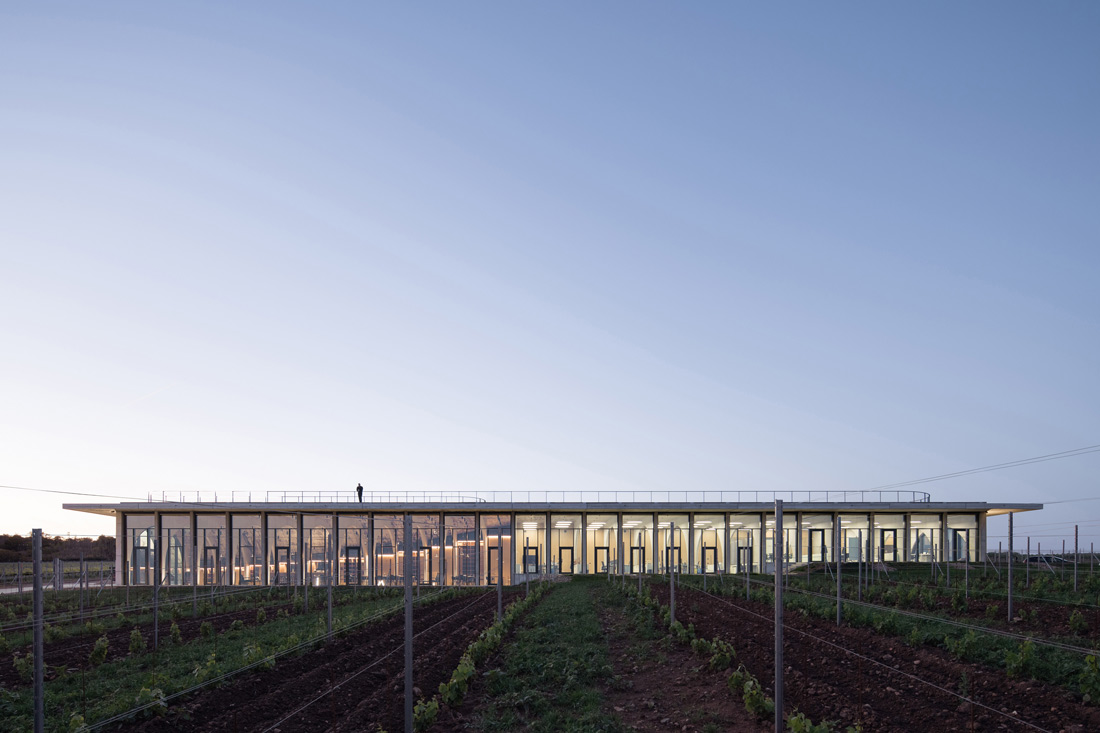 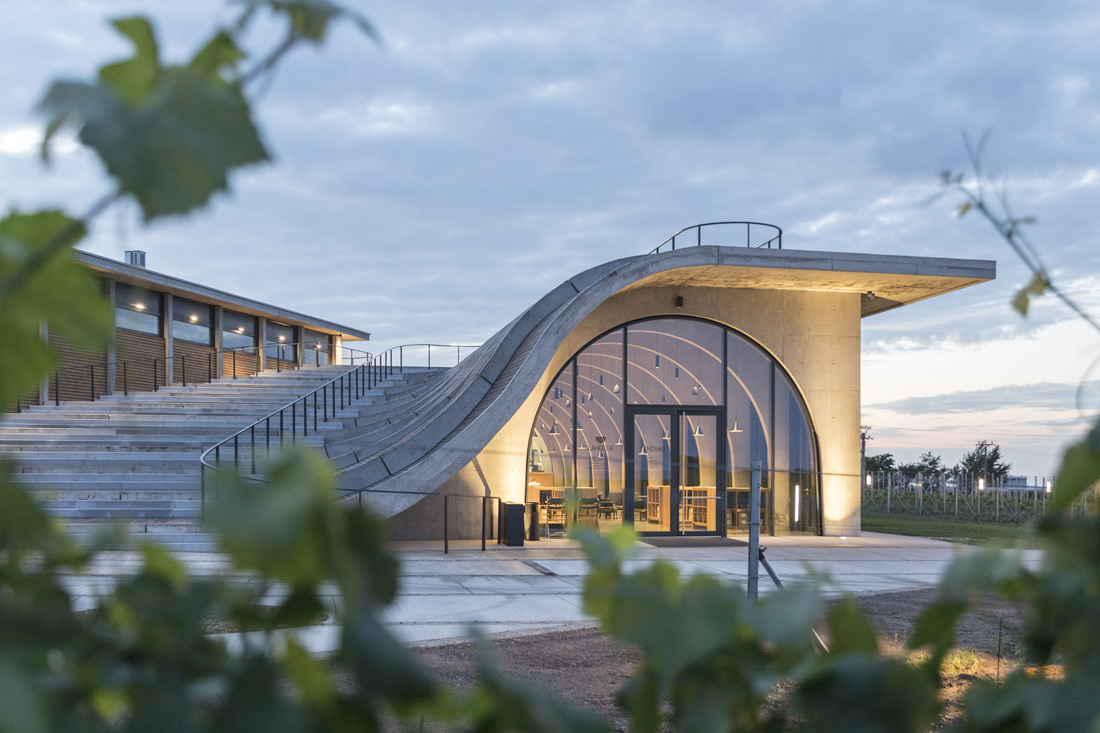 Topped by the concave roof of the amphitheater, the space unfolds into a vast cellar, embracing the design of archetypal Czech wineries defined by the exposed rib construction of the arches. Each reinforced concrete arch is individually designed to fit a specific angle of the ceiling, while the distance between the arches is determined by the space between the rows of grapevines. Each module rises from a vine row and runs through the space, achieving perfect visual symmetry and guiding the viewer’s gaze across the grapevines. Enclosed in a glass façade and facing south, the visitor center draws abundant light as the windows act as concealed separation from the exterior. Informed by the surrounding nature, the visitor center invites visitors to fully experience its products in the cellar, made of wood, concrete and glass, and the adjoining tasting room. A large-scale mural by Czech contemporary artist Patrik Hábl covers the entire ceiling area. Its tampered, irregular and sparse strokes, ranging from earthy reds and blacks to terroir-reminiscent browns and beiges, echo the variations of the soil and its weightlessness as it seemingly lifts off the ground, leaving its timeless markings on the walls. 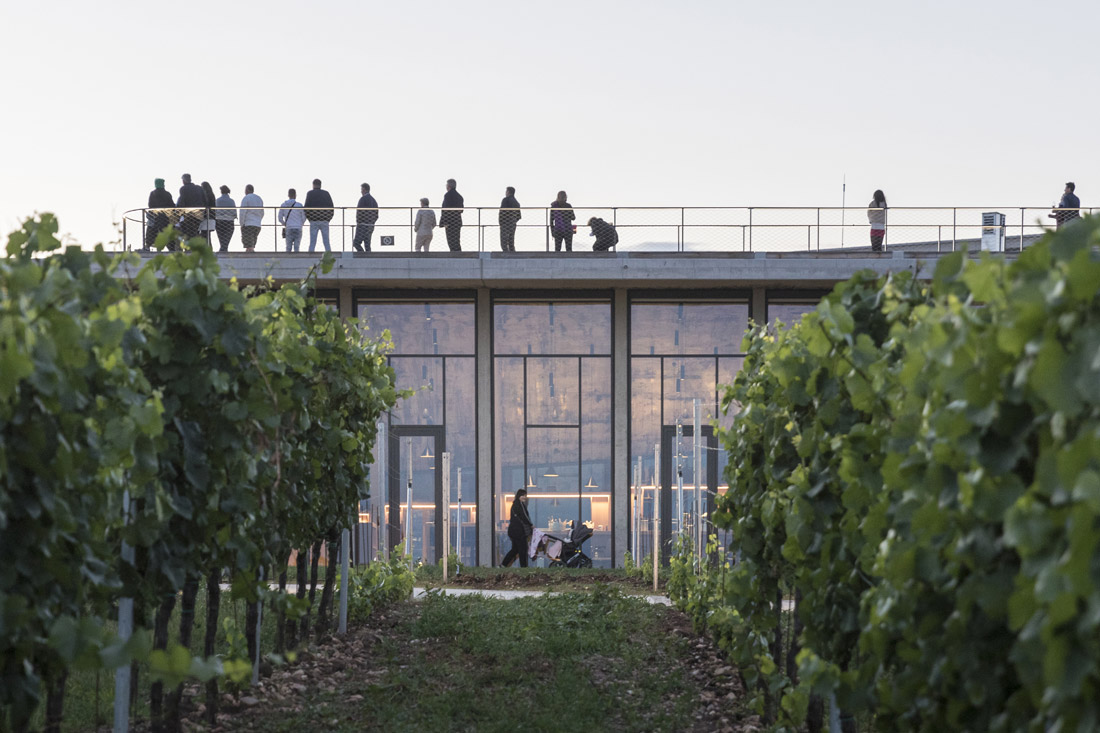 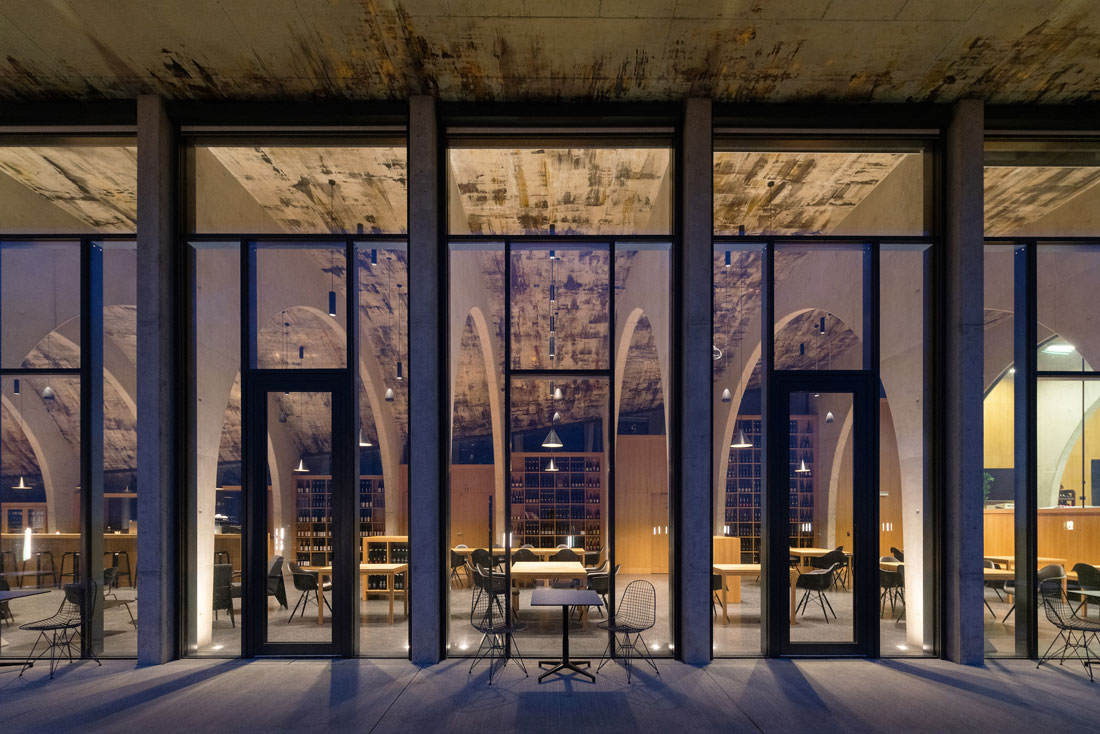 In the continuity of this material wave, the structure houses its production in two halls of distinct heights, each mirroring a specific process. The first lower hall centralizes the operations, including wine-making production and employee facilities, while the second allows for operations that require lower temperatures, such as the wine press, the cellar, and the wine store. 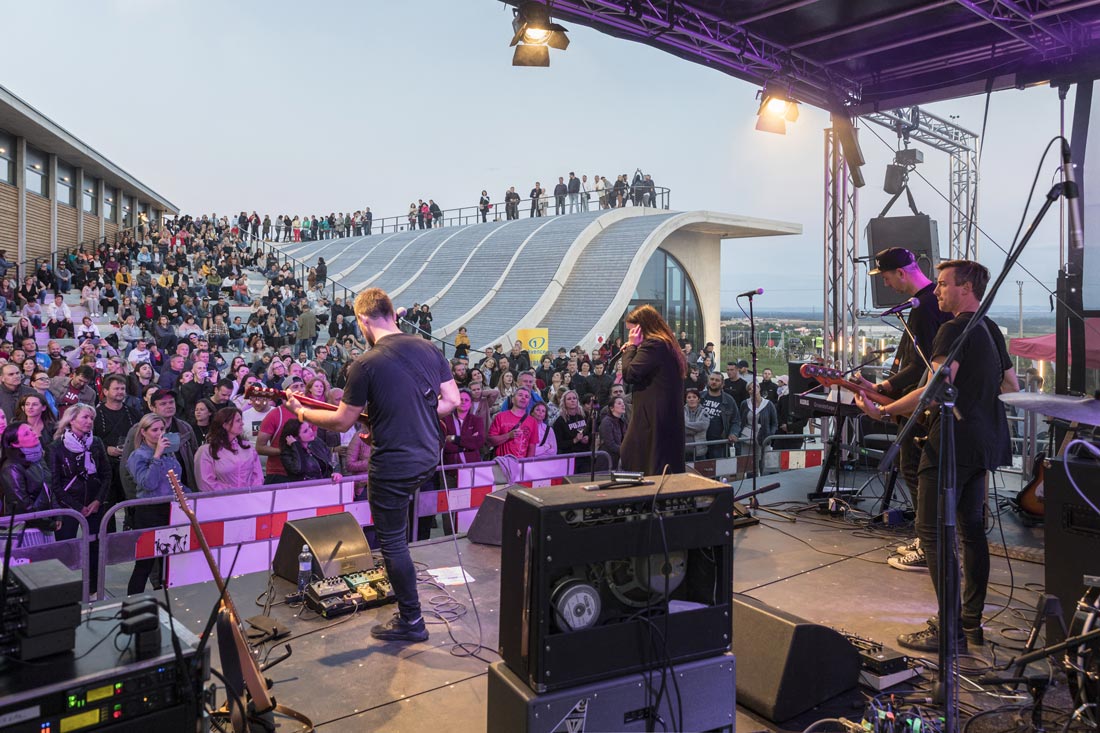 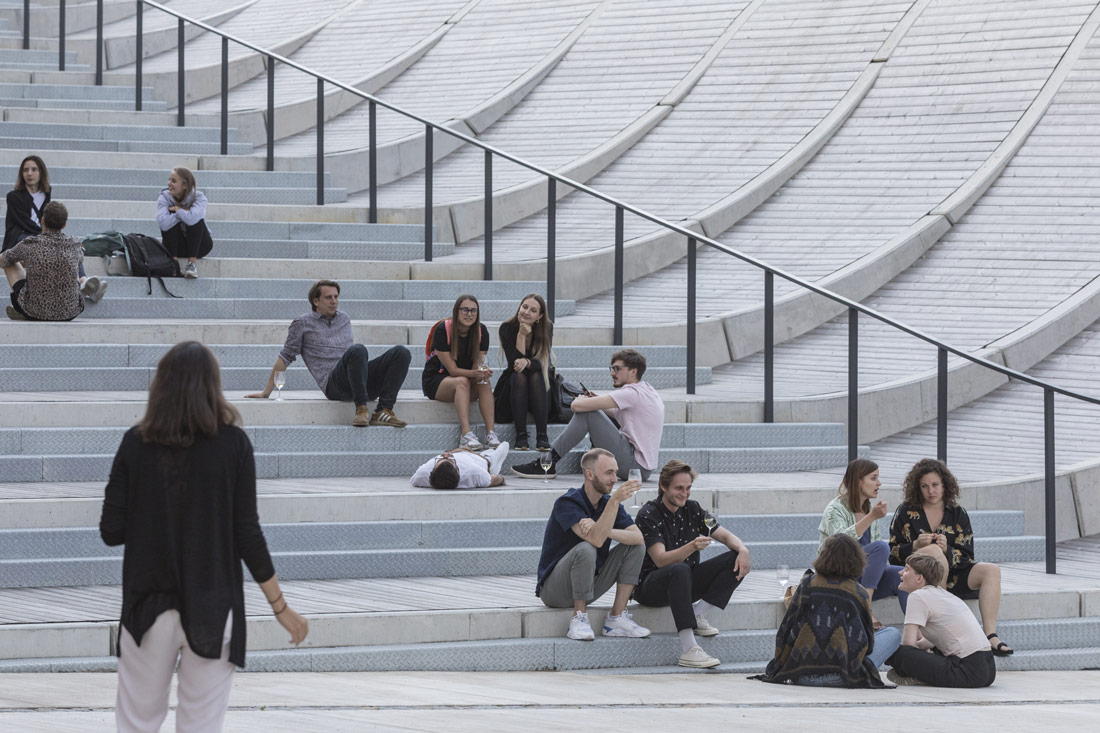 The varying heights of the interior spaces, emulating the terrain, allow for the alignment of corresponding functional exterior courtyards. While one courtyard serves as the operational area, centralizing logistic and production presses, the other holds the amphitheater, extending sweeping views of the landscape. 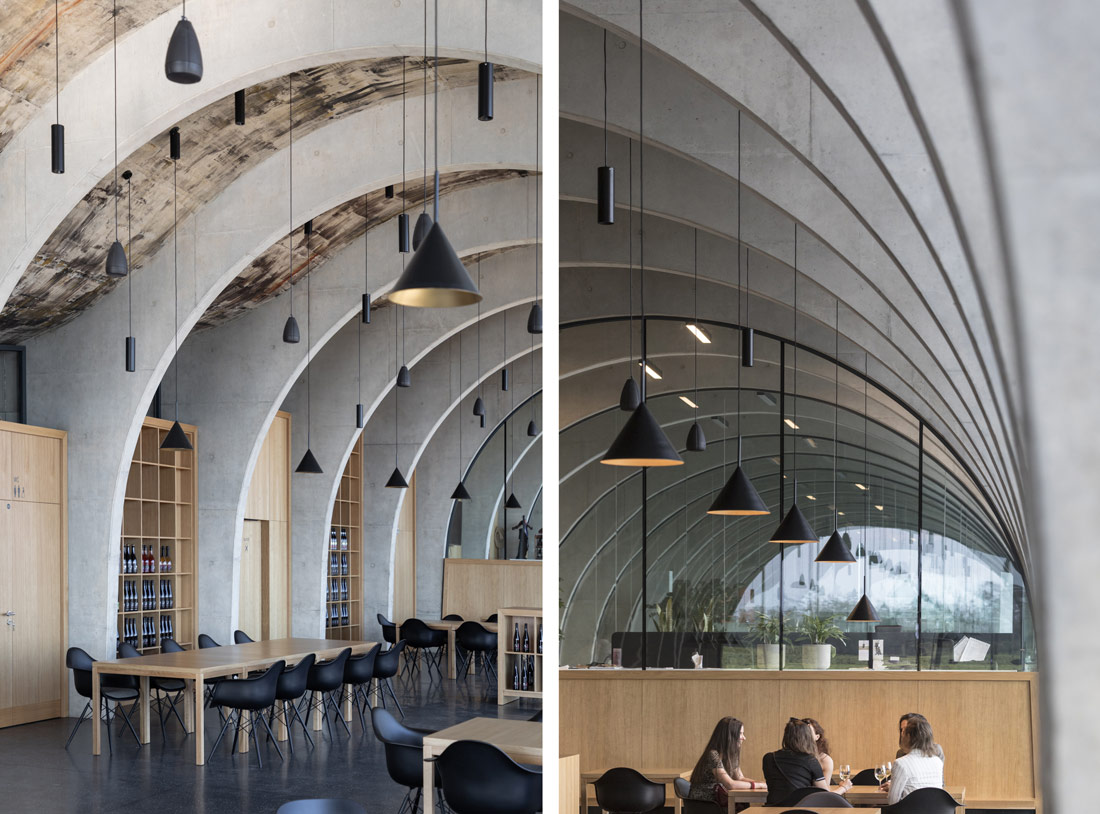 An open space emerging from the rhythmic vines, the amphitheater invests the boundless roof, overlooking a horizon nourished by its history. Expanding on the Lahofer Winery’s function from a production site into a witness to the local culture, it acts as a community space, dedicated to cultural events including local grape harvest celebrations and theater performances – a hub for the community to connect with visitors from the region and wine connoisseurs from all over. 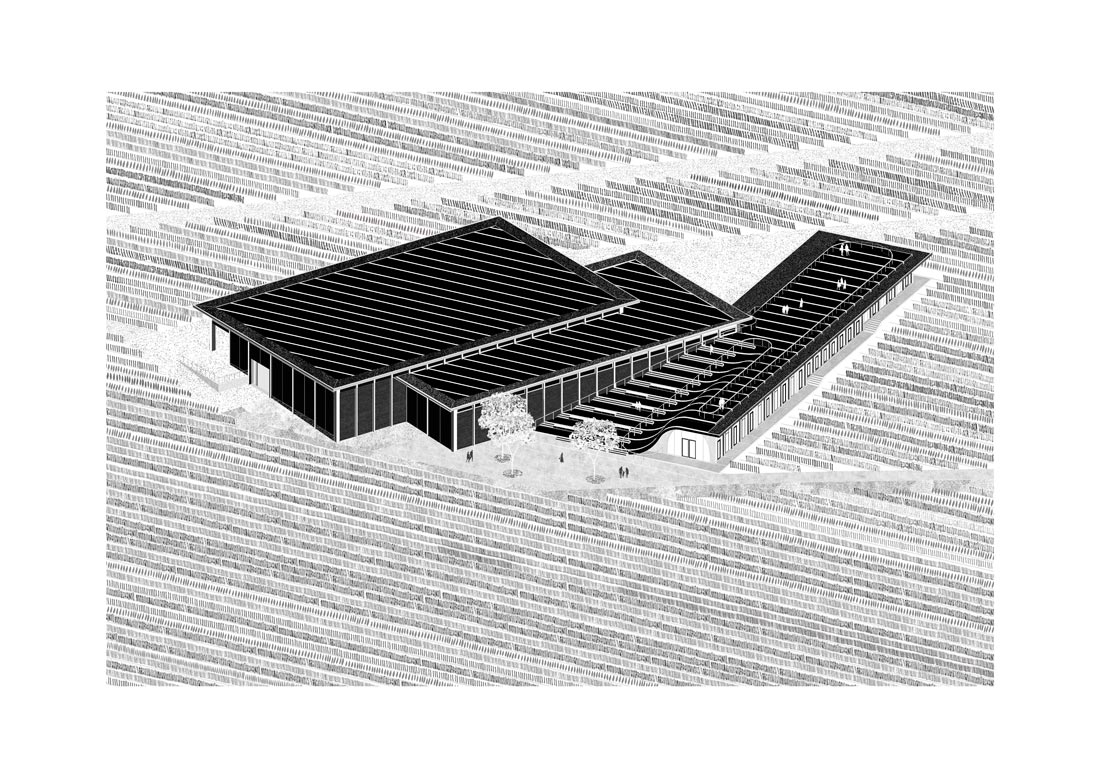 « Human Domination on Earth
Home for All: 66 New Homes to Low-income Citizens »